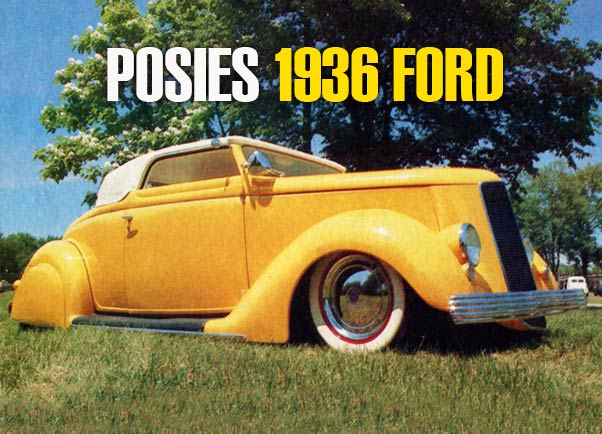 Ken Fenical, owner of the Posies Hot Rod Shop in Pennsylvania already had quite a reputation for building fine Street Rod and Hot Rods in the early 1980’s. But he put his business really on the map in the 1981, when he built a traditional styled 1936 Ford convertible for his personal use. The early 1980’s was the time of the revival of the Custom Cars, inspired several major Custom Car enthusiasts as John D’Agostino, Richard Zocchi, Rod Powell, Pat Ganahl and many more the interst in 1940’s and especially 1950’s styled Custom Cars grew from nearly zero interest into a new rapidly growing movement. Several Custom Cars helped grow of State wide interst in the period styled Custom Cars, one of these was this Posies 1936 Ford Convertible. It was styled as if it could have been driver right out of the early 1950’s, but a modern Street Rod drivetrain made sure the car could be driven anywhere. The color choice of bright yellow with a white padded top made the impact this car had even bigger. 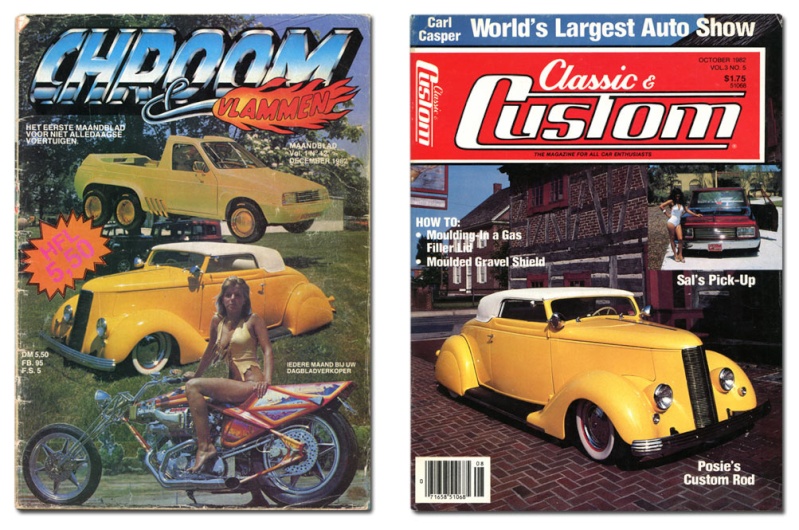 On the left is the December 192 issue of Chrome & Flames magazine (title is in Dutch), the first time I saw Posies 1936 Ford. Later I found a copy of the  October 1982 issue of Classic & Custom magazine with the car on the cover, and much more info in the four page feature inside.

The first time I saw his car when it was featured in the Dutch/Belgium magazine called Chrome & Flames. An rather obscure magazine, but sometime they had some nice cars, besides that it was my only link with the American Car scene in the early 1980’s The car had an amazing 6 page full color article in this magazine, and I was in total awe. I just could not believe how beautiful this car was back then. (I had no access to old magazines and books in the early 1980’s) By my own personal standards today I think that the car is too low, and especially the slight forward rake, and none accurate looking padded top and other details, does not give the car the right feeling of a late 1940’s custom Car, but back in early 1980, I thought this was the most beautiful car ever. 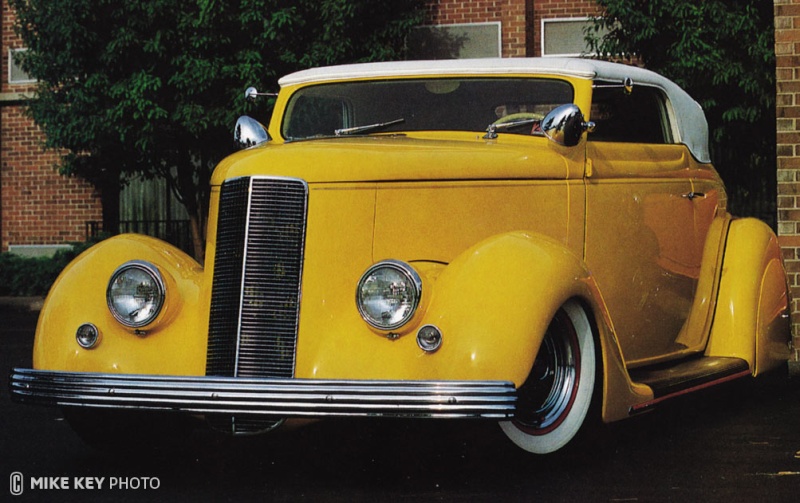 CCC-posies-36-ford-02Mike key used this photo of the 1936 Ford in his book LEAD SLEDS from 1984. I really like this photo now, since it does not show the slight forward angle.

Ken built this car for himself over a period of nearly four month. And his goal was to built a car that he could use to go to Street Rod shows as well as Custom Car shows. He decided to go with a full modern Street Rod drive train and frame, but all the looks and feel on the outside would be late 1940’s early 1950’s, Westergard style.

The Frame work was done first. Ken wanted this car to sit very low, but he still wanted to be able to drive it. To be able to do this he knew he had to modify the frame a lot. But rather than reshape the original frame he decided to use more modern components for the front and rear section of the frame. The ride height for the car was figured out, and a jig was built for the frame. The stock 1936 Ford frame was cleaned up and strengthened. The front end of the frame was cut of and replaced with a 1969 Chevy Nova subframe. The rear end was replaced with the frame section of a 1965 Mustang. Both suspensions were of course updates with Posies excellent Street Rod parts making sure the car would drive the best.The stock flathead engine was replaced with a reliable 1980 Corvette L-81 engine. The engine was cleaned up, and later dressed up with all kinds of chromed goodies. 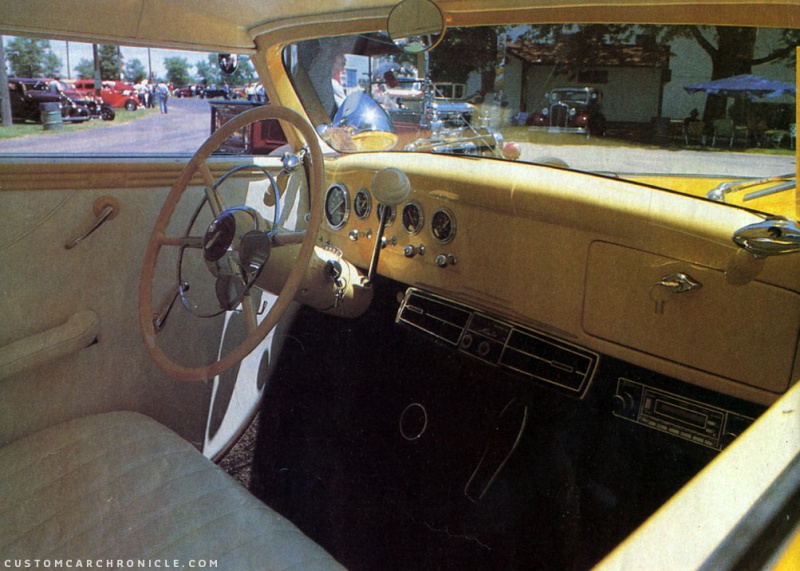 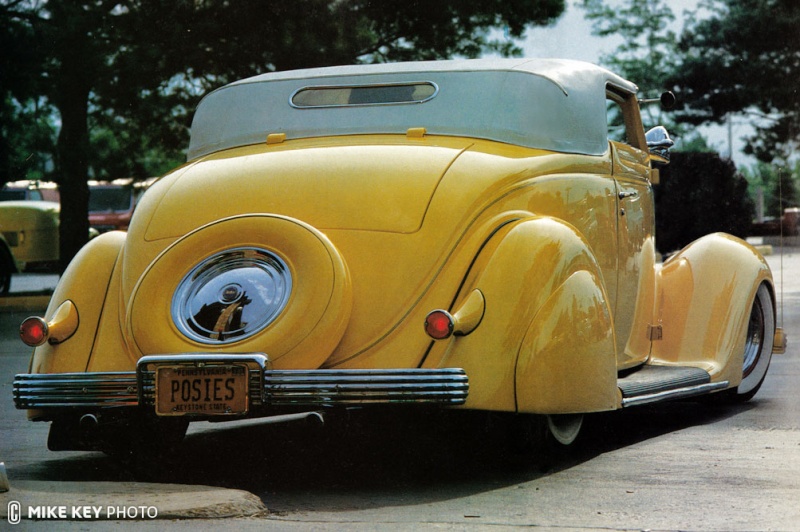 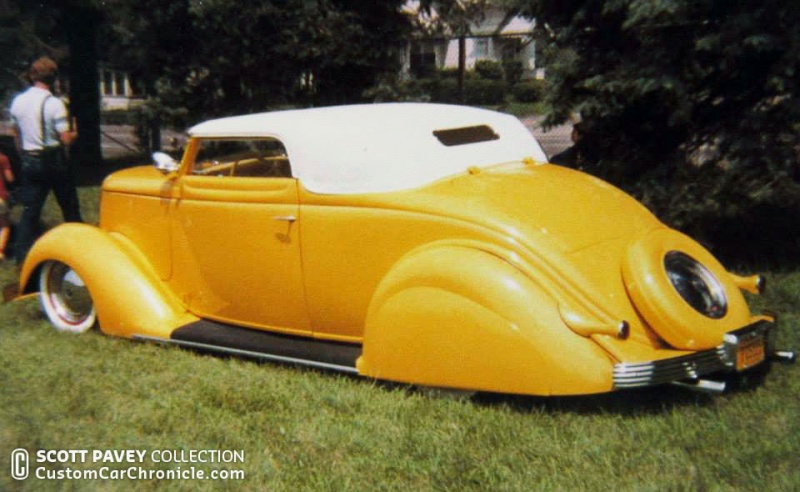 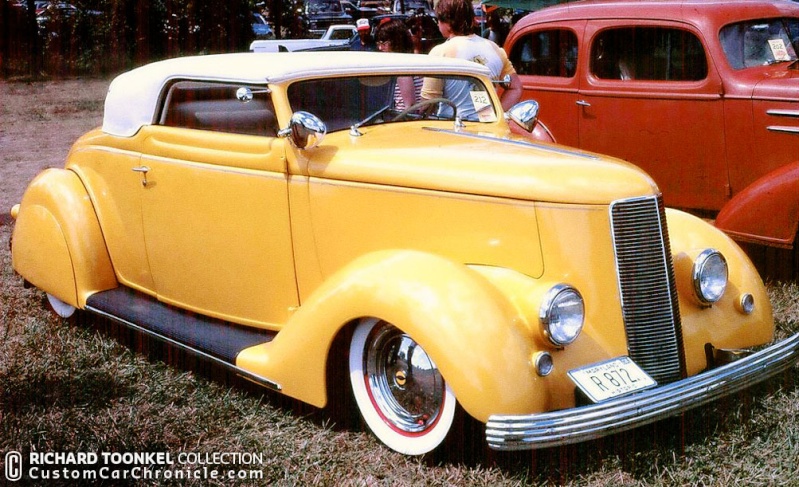 Then it was time for the body customizing. Ken had done his research, looking in his old Custom Car magazines and knew he wanted to go for an early Harry Westergard inspired look. He had found a 1937 LaSalle grille and a set of 1937 Ribbed bumpers. All parts Harry Westergard loved to use on his typical customized 1940’s customs. The windshield frame was chopped 3,5 inches and a frame for the non folding top was created. Ken created the bows from metal rods and wood to created a more modern interpretation of a Carson style top. Next up was the installment of the LaSalle grille. Ken reshaped the top portion of the grille and hand formed the body shaped to which the grille fits onto. The stock hood sides were replaced with home made smooth units, and the two piece hood was welded to a one piece unit and hinged at the back “alligator” style. Headlights were molded low into the fenders, and two 1934 Ford parking lights are molded to the fender to make up the parking lights.

At the back the trunk was smoothed and the 1937 DeSoto bumper narrowed 8 inches to fit the lines of the car better. The gap from the bumper to the body was filled in with a hand made splash pan. To fit with the style of the rest of the car the splash pan was not molded to the body. the rear fenders were dressed up with a set of original 1940 Ford fender skirts which were slightly reshaped to fit the 1936 Ford fenders. A metal spare tire cover was mounted low below the trunk and sunken into the splash pan. A 1949 Chevy license plate cover was modified to fit the ribbed DeSoto bumper. To stay with the 1940’s theme the door handles were not shaved, and the rear fenders were not molded to the body. 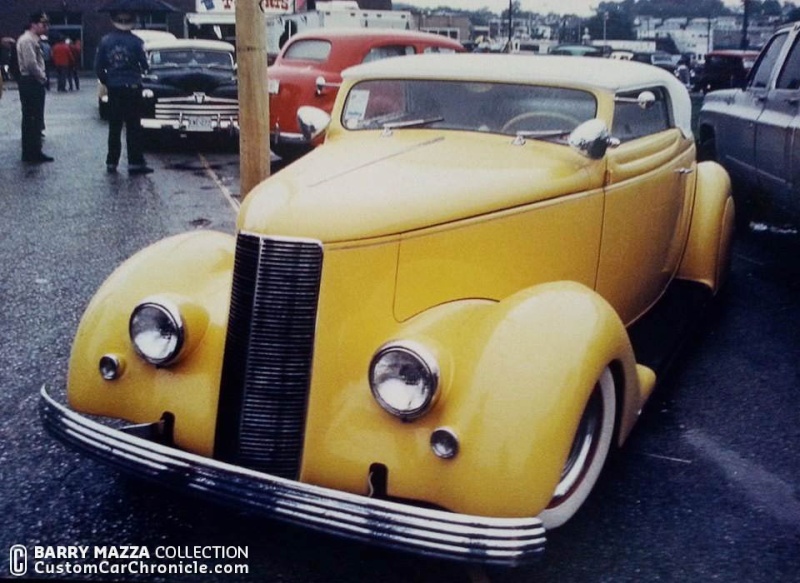 Barry Mazza took this picture of the car after a rain storm. Ken drove the car everywhere,not afraid of it getting dirty. 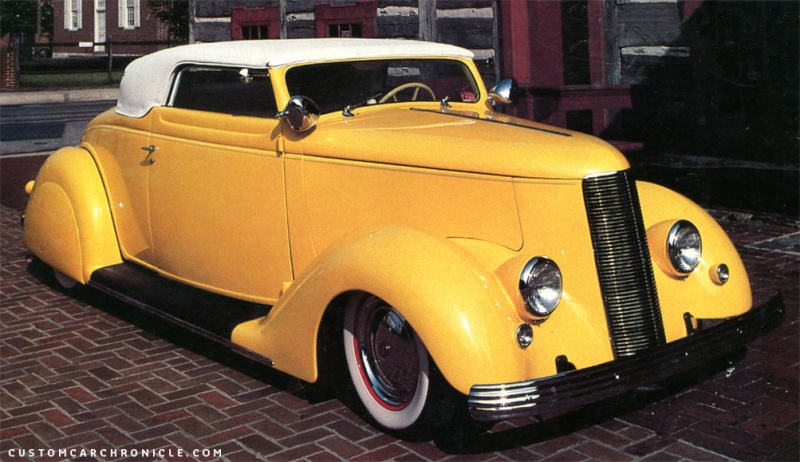 This photo shows the wonderful classic lines of the car.

Once all the body work was finished the car was painted with a bright Sunfire yellow lacquer. A mid 70’s Cadillac Power bench was narrowed to fit the small 1936 Ford body and a late 60s’ mustang rear seat was fitted to the rear portion of the car. Originally these convertibles only had a front seat. But Ken had two young kids and he wanted to bring them to the shows as well. The original dash was welded to the inside of the car for a smooth look and once the whole dash was smoothed he added a set of Stewart Warner gauges. Below the dash Ken installed modern AC and radio. The dash was also painted Sunfire yellow. The upholstery was done by Mike Haverstock Upholstery out of Chambersburg, PA. He used white leather to upholster the modern seats in an vintage looking tuck & roll. Mike also upholstered the padded top with white cloth material. He used an jaguar convertible rear window. 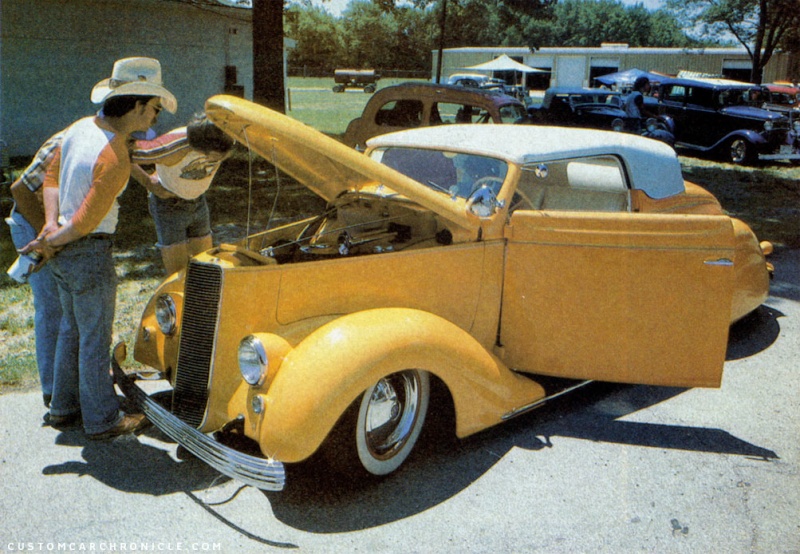 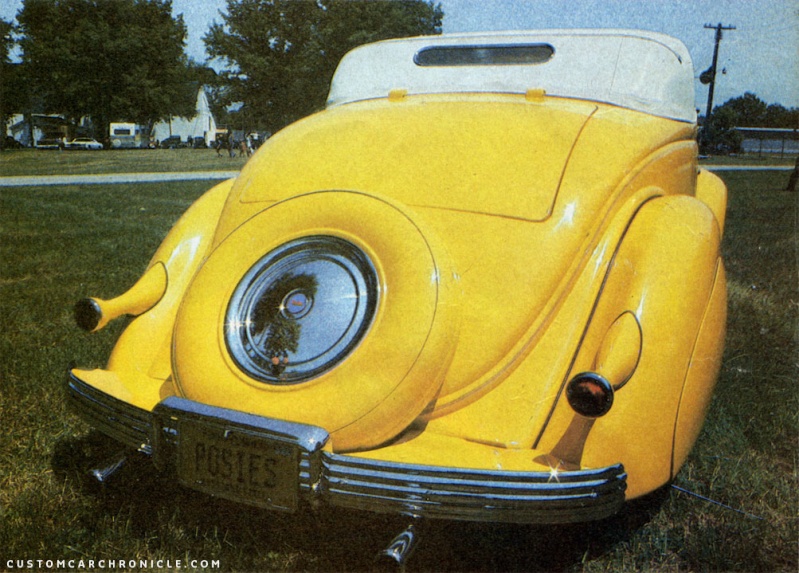 Ken showed the car a lot in the early 1980’s. He took it to the legendary second annual Lead Sled Spectacular in Des moines, Iowa where the car was a HUGE hit. After that the car was seen locally but not as much as in the early 1980’s. Then the car sort of disappeared of the radar, but in 2009 it suddenly appeared in California. The new owner, from Florida had taken the on a long cross country drive to show it at several shows. The car looked amazing in its natural habitat, but the new dark blue cloth upholstered top and interior had given the car a completely new look. It sure was great to see new photos of this Custom Car icon from the early 1980’s in such a good shape. 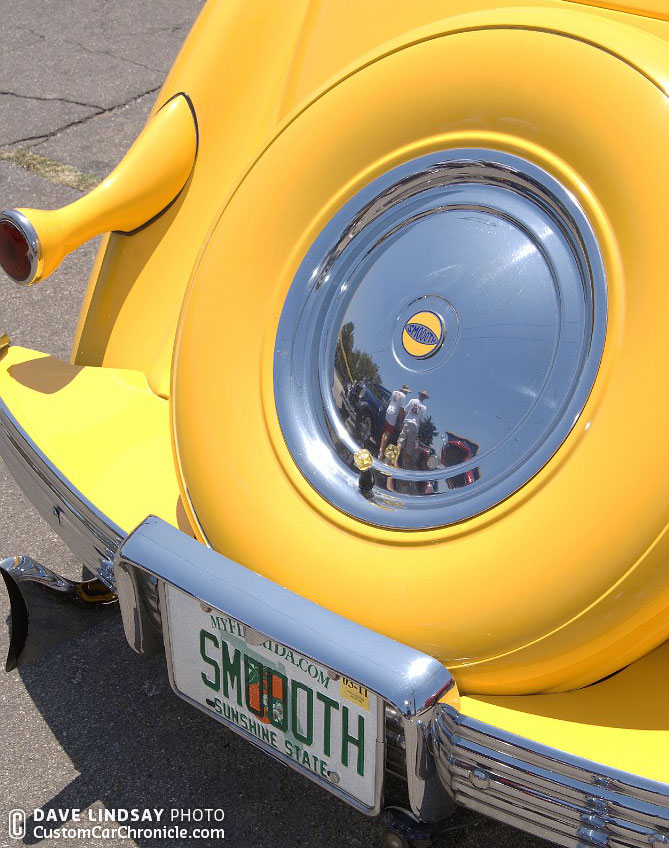 Dave lindsay took some nice photos of the Posies 1936 Ford now named “Smooth”. This photo shows the modified 1949 Chevy plate surround and the great looking 1951 Chrysler hubcaps sitting on that body colored metal spare tire cover. The Smooth hubcaps centers were hand made and replace the Posies units original on the hubcaps. 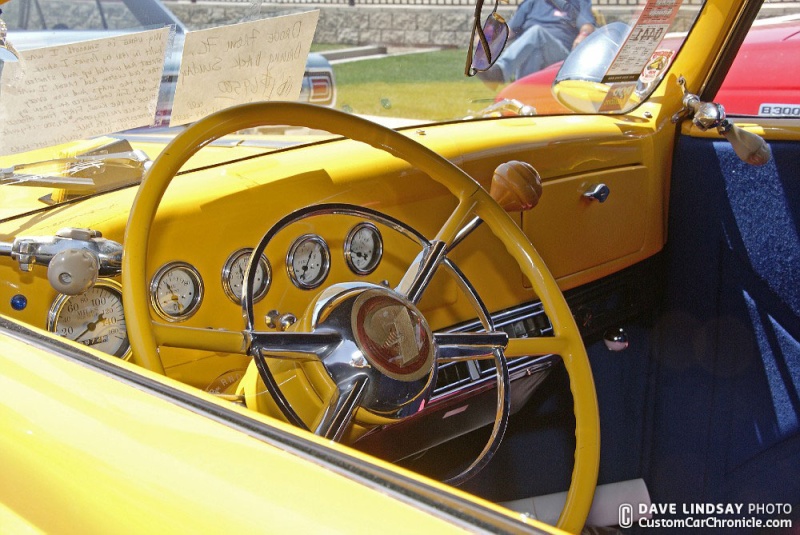 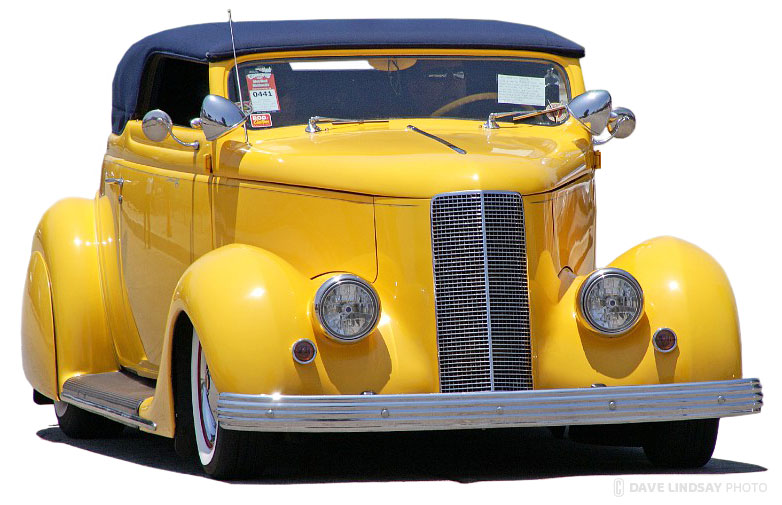 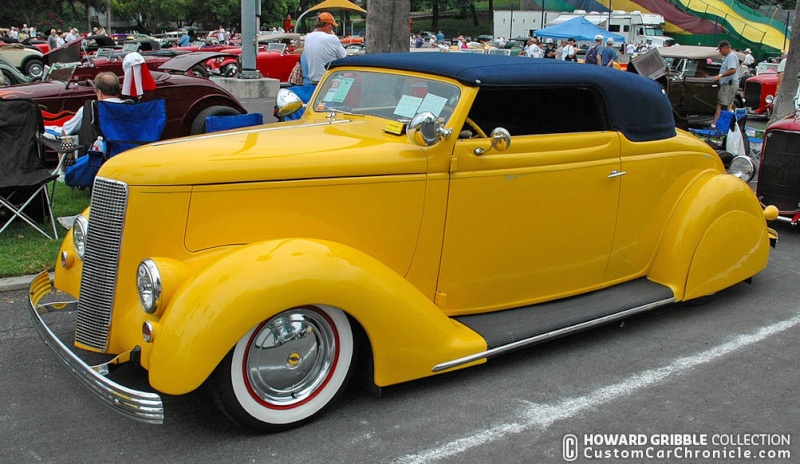 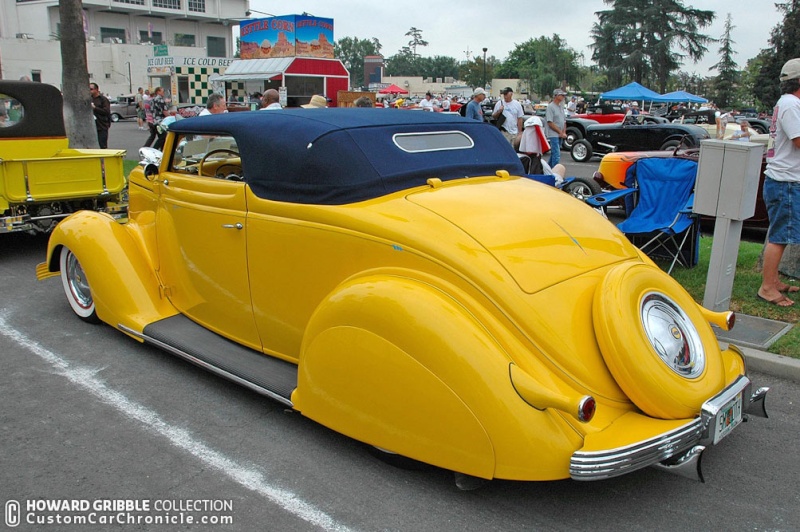 A few years ago, a new owner decided to redo the car completely, refresh the over 30 year old build. He decided to not change anything on the car, why would he, the car was perfect the way it looked. But he decided to go for a new color, burgundy, which once again changed the looks of the car completely. The dark blue upholstered top was redone in black and the interior was re-upholstered in black and off white. The molded-in 1936 Ford dash was cut out and replaced with a 1940 Ford unit which was painted body color with an off white lower section. The new owner also removed the AC and tilt column and replaced it with a Line Works steering column. At a later date, possebly after the car changed hands once more the interior was redone again. A dark red material was used to match the color of the body. The new interior with its diagonal pleats has a more street rod feeling than the previous interiors. The last photos I have seen of the car (not included in this article) show that the current owner has put chrome reverse wheels on the car. 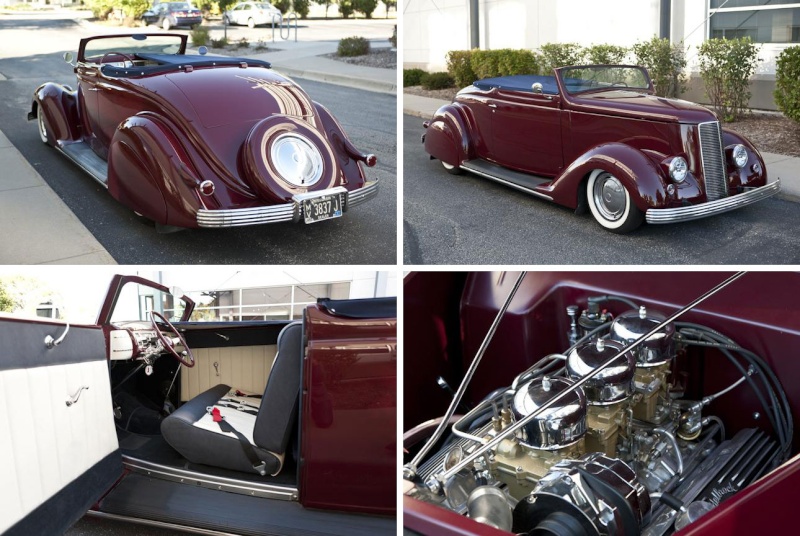 The interior was redone for this dark red version in black and white. 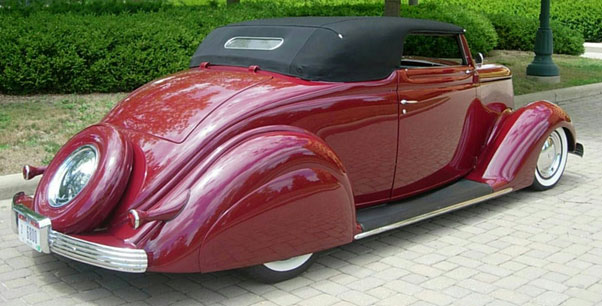 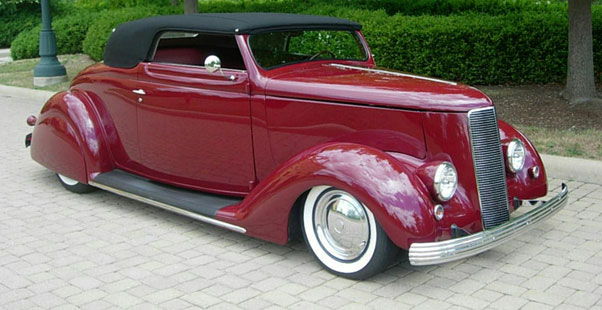 The new paint and top color give the car an more street rod feel to me. 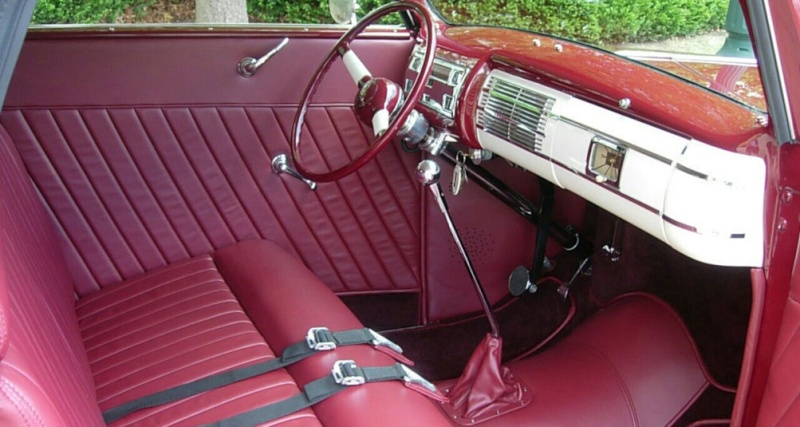 The 1940 Ford dash is new to this version. And so is the all dark red interior with diagonal pleats on the doors.


Personally I prefer the first yellow with white top and interior version of this car. Just the way Posies Ken designed the car.