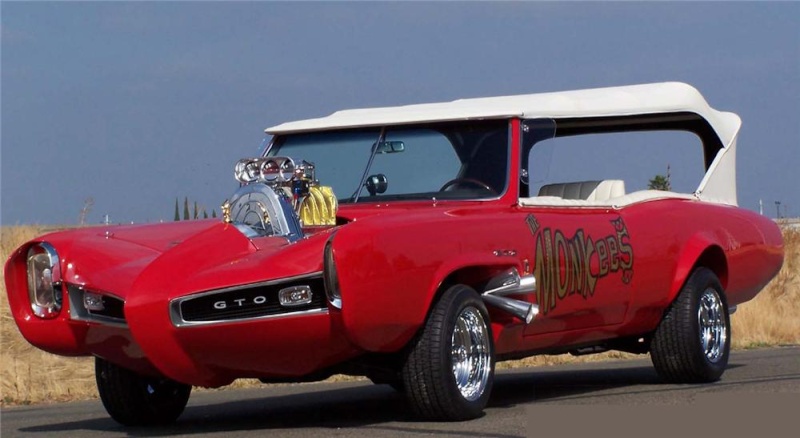 The Monkeemobile is a modified Pontiac GTO that was designed and built by designer Dean Jeffries for The Monkees, a pop-rock band and television program. The car features a tilted forward split two-piece windshield, a touring car convertible top, modified rear quarter panels and front fenders, exaggerated tail lamps, set of four bucket seats and an extra third row bench where there was originally a trunk, a rear-mounted parachute and a GTO emblem on the front grille 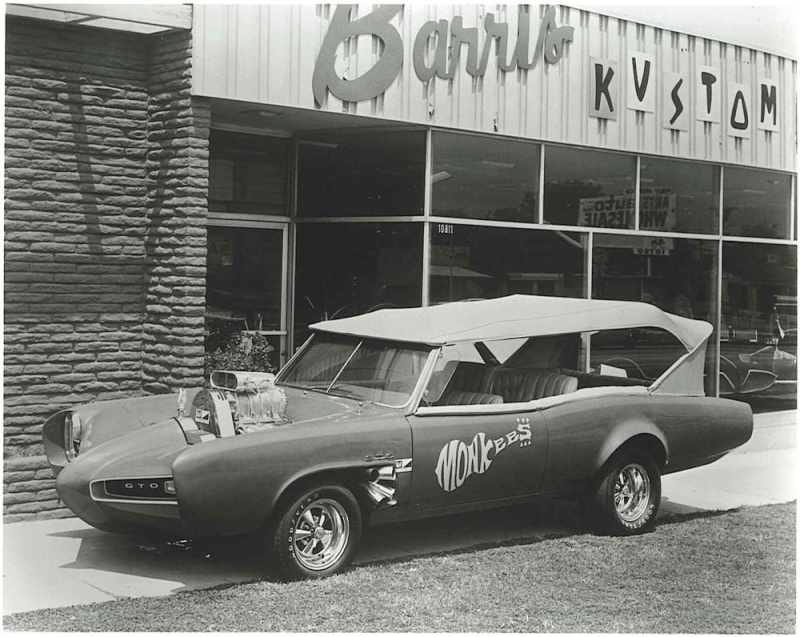 Two cars were contracted, one for the television program and the other as a promotional car, for touring car shows around the United States. Both cars would be built in the span of four weeks. The first version originally featured a 6-71 supercharged engine, a solid mounted rear axle (no springs) and extra rear end weight. This was to enable the car to "pop wheelies." Because the car had too much power and was difficult to drive, the original blower set up was removed and a dummy blower was fitted. The second car was used as a touring car for auto shows and promotional events. Before its transformation into the Monkeemobile, the second car was first seen on TV as Major Nelson's GTO in "I Dream of Jeannie". Both were used on The Monkees TV series, one during the first season and both throughout the second season.[2]

After the television show ended, both cars were offered back to Dean Jeffries for $1,000 each, who had right of first refusal. He declined to purchase the cars because he felt he could build new ones cheaper.[1] 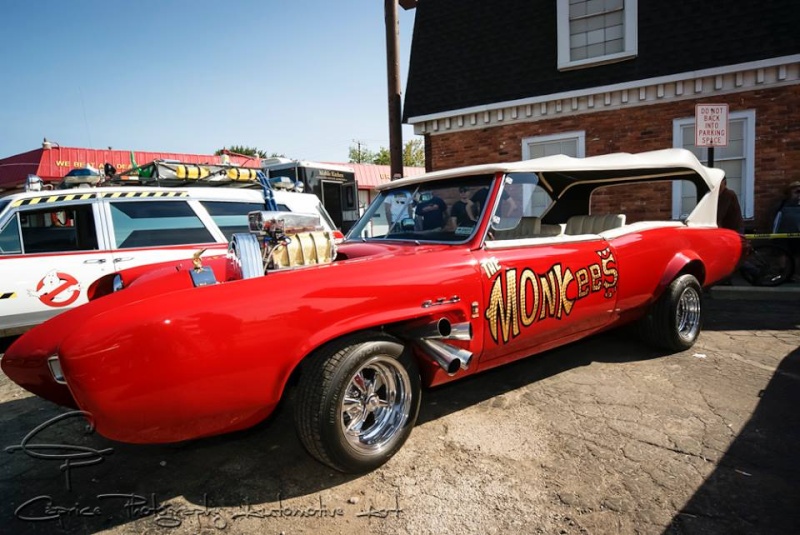 The "TV car" (aka car # 1) followed the Monkees on tour only to be left in Australia in 1968. It later resurfaced in Puerto Rico as a hotel courtesy car. To this day, there is still no hard information on how the car made its way to Puerto Rico, and it was sold at government auction in 1992 for $5,000 when the hotel went out of business. Though basically as it was built, the car did get some restoration work done when bought, and it was used as the example for the Ertl Company 1:18 scale die-cast toy, The Monkees 1997 TV reunion show, "Hey, Hey, It's the Monkees" and the 2001 "Cars & Guitars Of Rock N Roll" display at the Petersen Automotive Museum . It is now in the hands of a private collector in Northern New Jersey.[3] 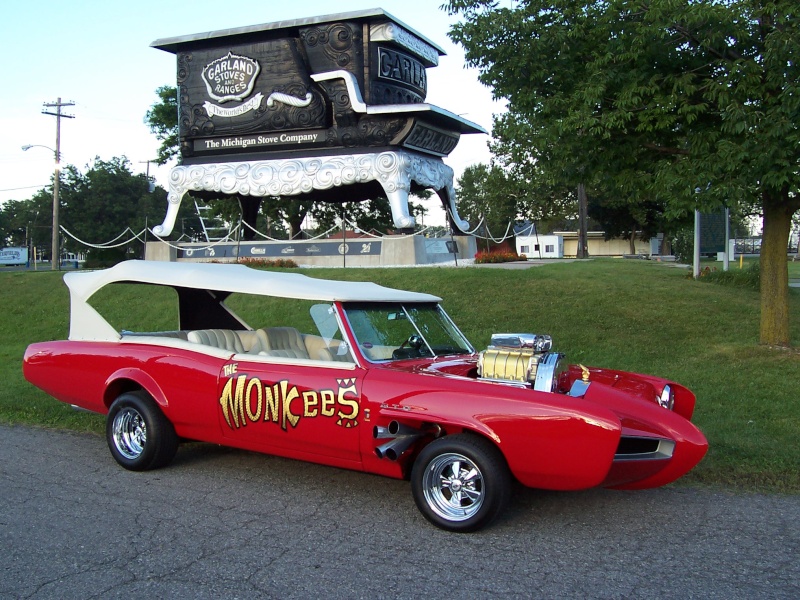 The "show car" (aka car #2) was purchased by custom car designer, George Barris. This car would be the most visible during the years. Barris later went on to use and display the car for promotions at many large and small events. In 2006 the car went through a major restoration. Even though it became a 100 point show car, many changes and upgrades were made. In January 2008, Barris, through Barrett-Jackson in Scottsdale, Arizona, auctioned the car for $360,000. It now resides in the hands of a private collector in southeastern Michigan.[4][5] 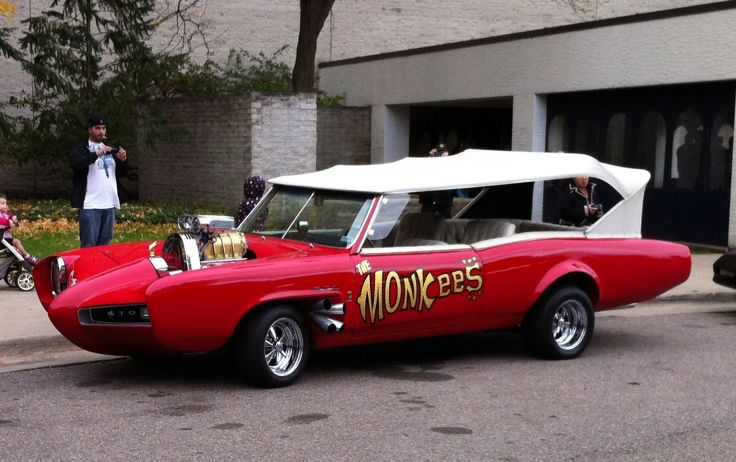 Barris also had Dick Dean, who had helped Jeffries build the two originals, make a copy, identified by yellow trim on the headlight bezels, tan seats (instead of the original white upholstery), and other variations. A second copy or tribute car was recently built by a longtime associate of Dean Jeffries this car contains many parts removed from the #2 car during its restoration and belongs to a private collector in Florida. Another repica was built for the Monkees 45th Anniversary Tour.[6] The tour, which took place from May 12, 2011 to July 23, 2011, was the fourth and final reunion tour to feature band members Davy Jones, Micky Dolenz and Peter Tork together, before Jones's death from a heart attack on February 29, 2012.[7] There are numerous replicas created over the years with distinctive visual differences unique to each car. None of these copies were made by the original cars' creator, Dean Jeffries.
_________________
We don't care the People Says , Rock 'n' roll is here to stay - Danny & the Juniors - 1958 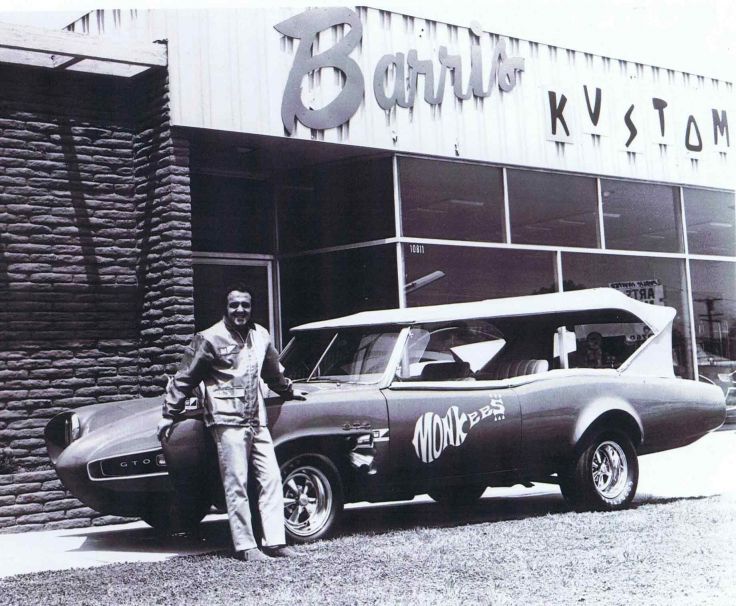 A TV series showcased the complete build for the 45th Anniversary Tour replica car, built to the specifications for the television show. Dean Jeffries, the Monkeemobile's original designer and fabricator, provides direction and commentary for the car's refurbishment. This was among his last projects before his death.[8] Unlike some other "copies" that lack many of the details of the original, the 1967 Pontiac GTO 4-speed "donor car" was professionally transformed to a concours grade show car with exacting detail, from the GM paint code "R" to the gold plated 6-71 supercharger and correct Cragar wheels.[9] 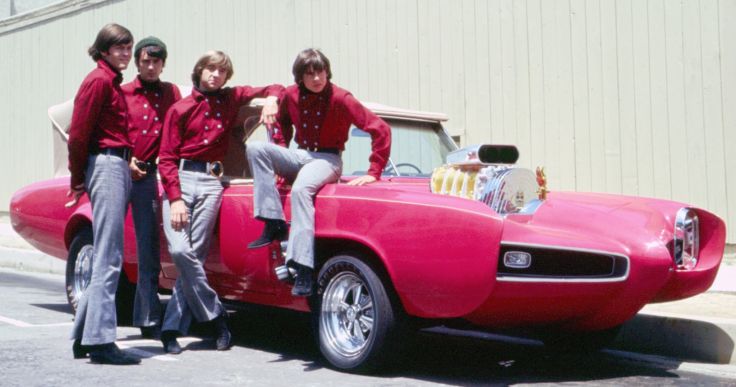 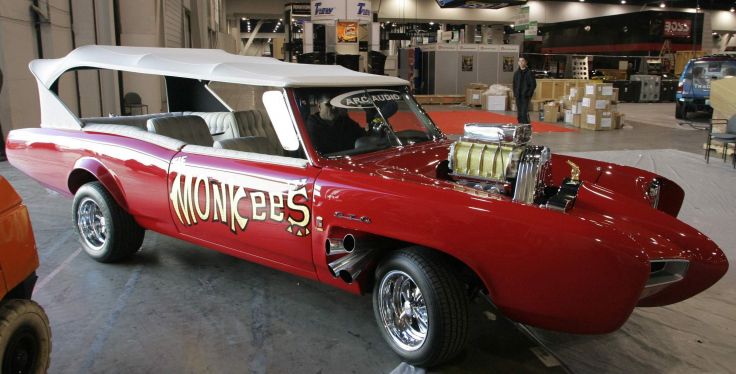 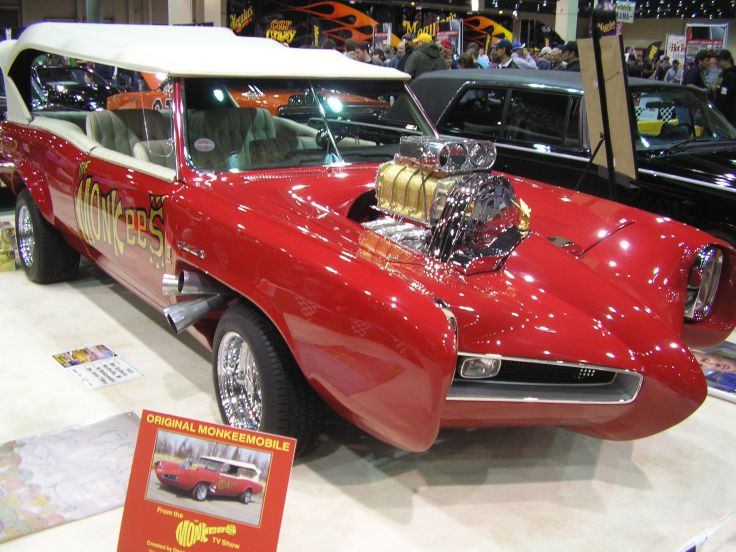 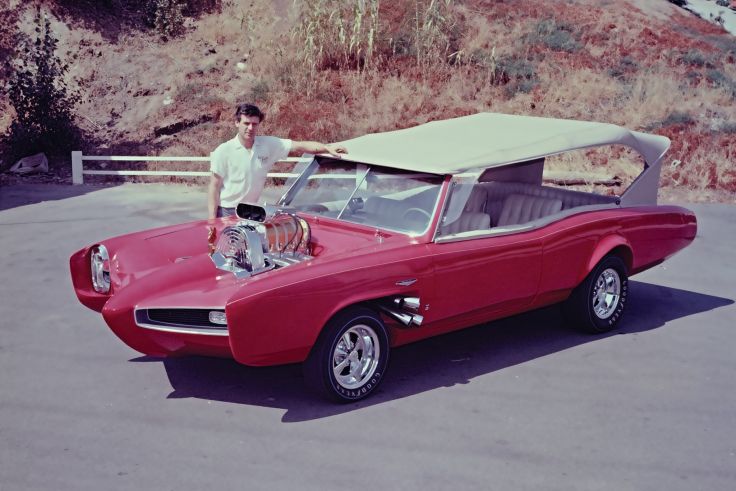 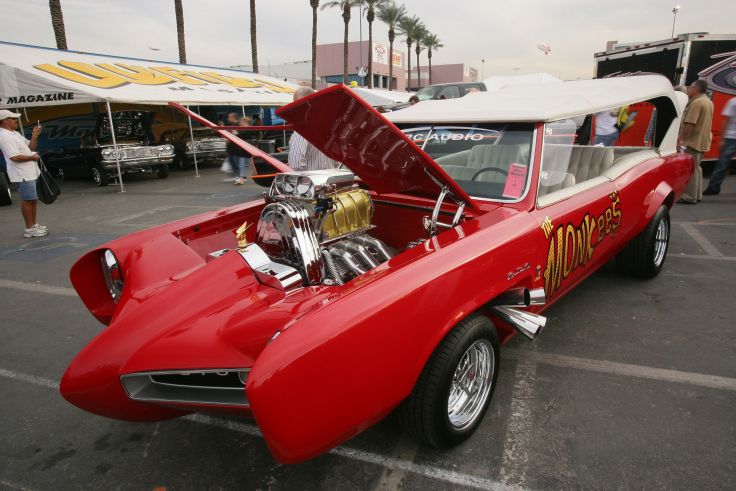