Of all the ways to start a project, finishing what someone else started usually ranks about the worst. But the siren's call of another's idea is as irresistible as a stray puppy to a little boy. 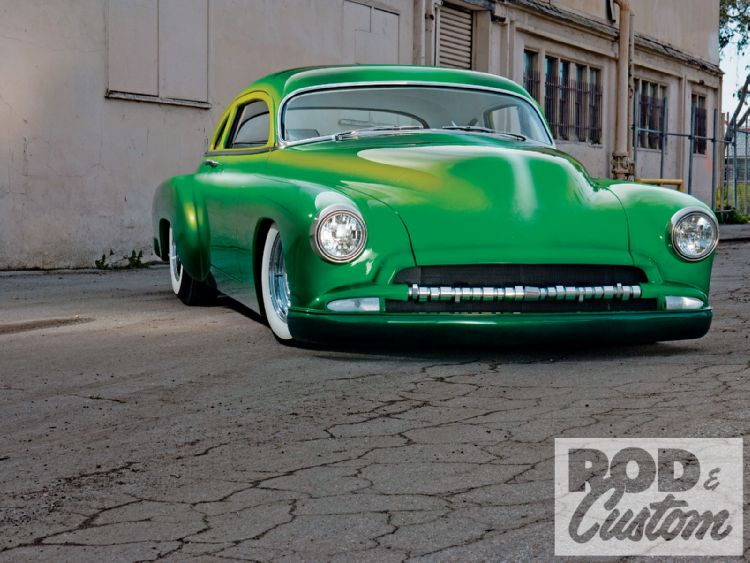 Big-hearted souls inquired about buying and finishing the sectioned Chevy sedan perched atop the spray booth at a Coquitlam, British Columbia, shop. And for 26 years the answer remained the same: No. No, they wouldn't sell the project born as a means for an old hand to pass his torch to the next generation.

The answer should've been the same the day John Foxley asked about it. But the booth's sagging roof and recently discovered cracks indicated that the abandoned project, the metaphorical elephant in the living room, threatened to crush the chamber like a fat kid on a Big Wheel. It had to go. And here was that little boy, starry-eyed for the dog they no longer wanted. 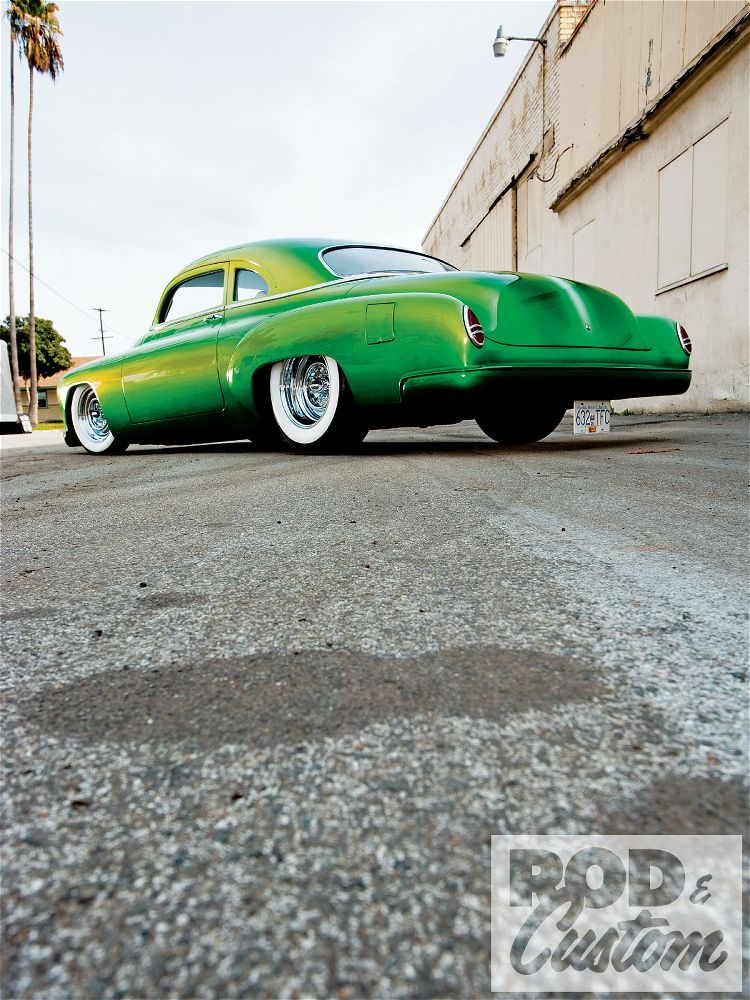 Like a puppy with Parvo, John's newfound pal revealed itself as far from perfect upon delivery. Perched 10 feet aloft, the body looked one way, but the perspective his garage floor offered gave John pause to reflect. "It was sectioned really heavy," he recalls. "And it looked really odd." If there was a silver lining to this rapidly darkening cloud, it was the car's chassis and floors-specifically the lack of them-that gave John an opportunity to fib to himself. "It was basically a full-sized model car body," John reasons.

More self-fibbing followed. "I got this idea from a guy who had a sedan delivery to do a floorpan swap," John says. Measurements indicated that G-body GM cars had a narrower and more desirable track width. Never mind that the G-body's wheelbase is a 1/2 foot shorter; John bought a minty '78 Malibu wagon anyway. 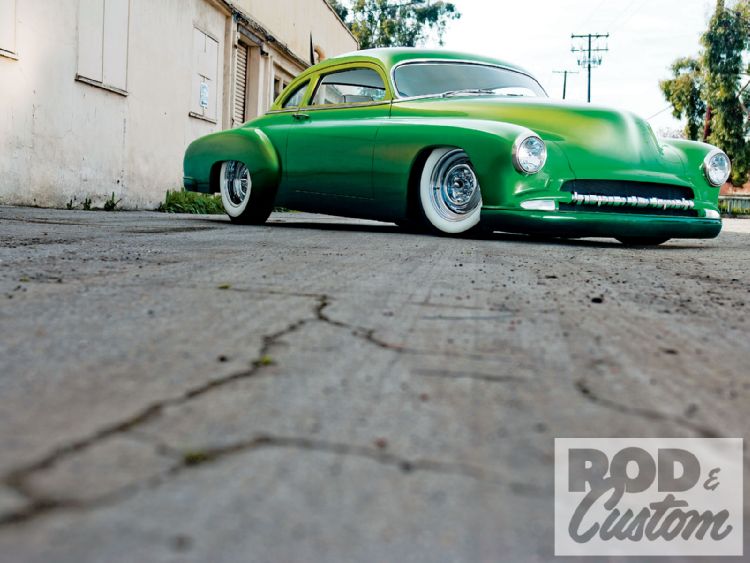 Mom warned that two wrongs don't make a right, but John actually had a plan: "To chop the top the way I wanted, I'd have to lengthen it by 6 inches," he says, referencing how the top's trapezoidal shape influences its finished shape. But rather than making the chassis and top fit the body, he took advantage of the chassis' shorter length and removed a 6-inch vertical band just behind the doors to make the body fit the top and frame. "It went really easy," John admits. 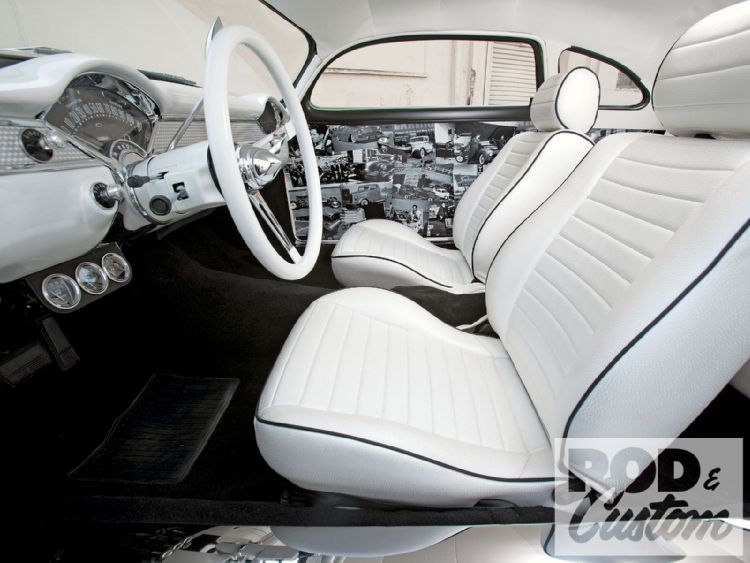 But that was just the start. John then cut the rear window frame from the top, lowered the A-pillars 4 3/4 inches, and let the back of the top fall inside the body when he set it back on. With the A-pillars tacked, he jacked the roof up and down until the profile looked right, which in his estimation happened about 6 or so inches lower than the original top height. "When I cut off the roof I'd left about a 1/2 inch above the beltline, so when I liked the way the roof looked I just welded that lip up and cut off all the roof skin that hung down below that line," he explains. Naturally, the back window frame went up into the roof 6 or so inches higher. 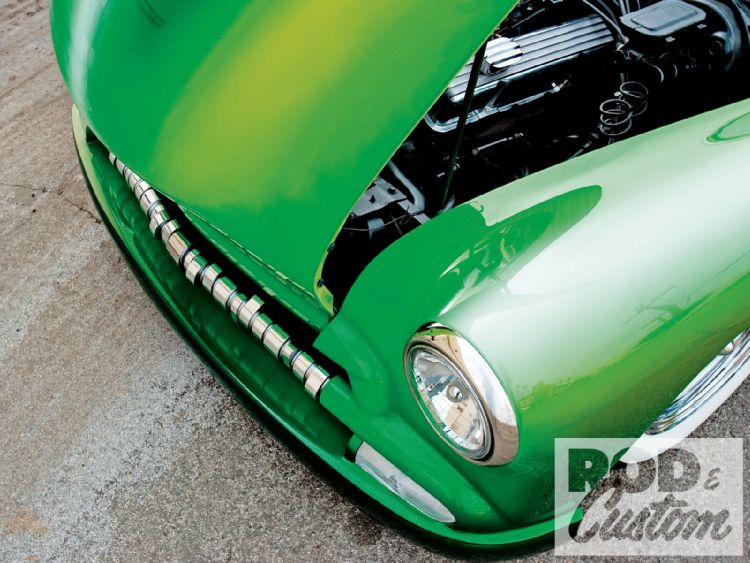 John then addressed the donor chassis. After chopping the Malibu body to the rockers, he established the chassis' ride-height potential with a set of air springs and S-10 dropped spindles. "Once I got it down, I started hacking the Malibu and the '52 until I could make the two cars fit together", he says. "Then one day, my in-laws (mother-, father-, and brother-in-law) came over and the four of us lifted that body and dropped it on the chassis," John recalls. "It sat cockeyed at first, but from that point I could jack it up, trim it, and try it out. 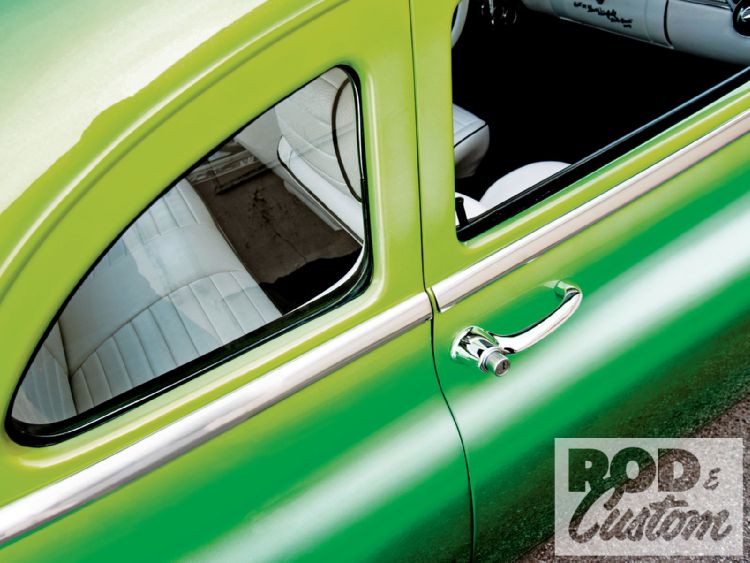 "With the '52 body over the new chassis you could still see the bottom edge of the Malibu rockers," he admitts. He ended up extending the '52 rockers. With the chassis laid out, he positioned 1x3 tubing horizontally where he wanted the rockers' lowest edges, which happened to be an inch or so above deck. He trimmed away the existing rockers about a 1/2 inch below the doorsill, had some sheet bent, and used it to span the gap between the trimmed rocker edge and the tubing. "At the front wheelwell the rockers are about 1 1/2 inches lower than stock, and at the rear wheelwell they're about 2 1/2 inches lower," John says. What's more, the tubing is actually the lower edge of the rockers, and orienting the tubing sideways meant John was able to tie them into the Malibu's inner rockers. "The wheelwells on those cars are really square and boring," John says. So he cut each wheel opening from its quarter, narrowed it 1 1/2 inches, and sliced and spread its rear corner. "Now the back of the wheelwell matches the B-pillars," John says. "It gives them a bit more of a forward motion." He then reattached the openings a tick more than 2 inches lower than stock so their leading edges aligned with the dropped rockers. 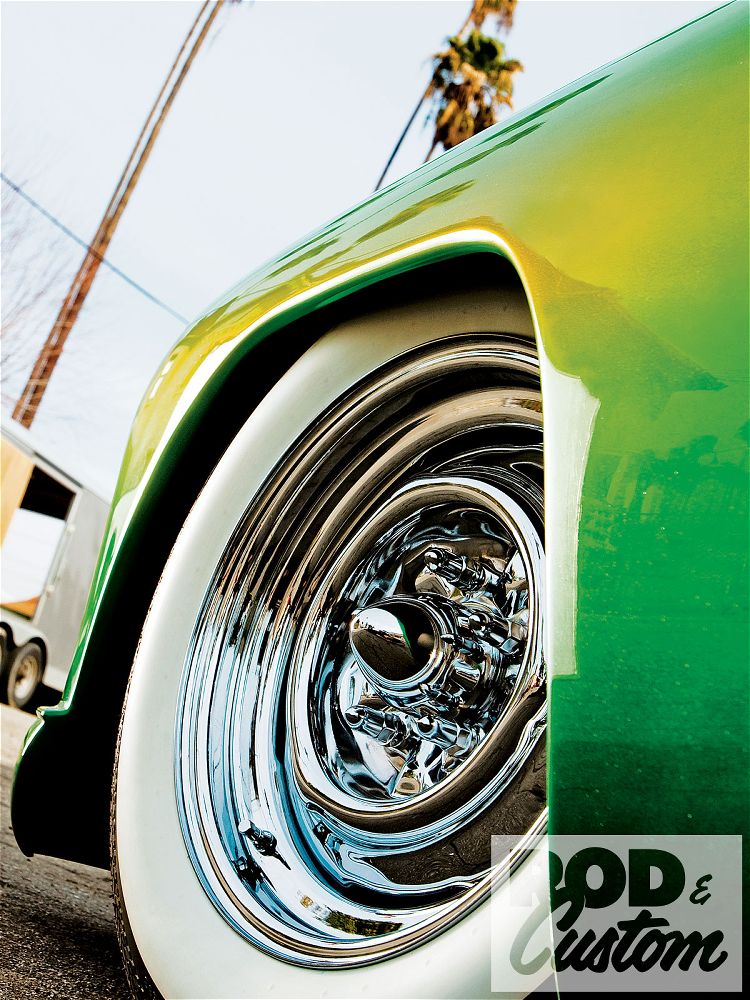 The bubble in a stock '52 quarter ends about 1 inch above the stock rocker, which amounts to more than 3 inches higher than the lowered rockers. In this particular body's case, the extreme sectioning made bullets of the bubbles' leading edges. "Well, I wanted them to sit flush with the bottom of the rockers, so I sliced the whole shape apart and put it back together with a rounder curve," John says. Now the quarters' softer bubble shapes end at the base of the rockers right in front of the wheelwells. "The rear bumper was ridiculously too high, so I moved it and the quarters 3 inches down," John says. What's more, he narrowed and flipped the bumper. "The gravel pan has an interesting shape but it usually goes below the upper edge of the bumper," John notes. "So I trimmed it down and welded it to the top of the bumper. I didn't want it to look extremely molded, so I welded some round rod around the edge of the pan where it overlaps the bumper." Finally, he welded the bumper and pan assembly to the body, thereby restoring the strength lost by trimming the body's stock inner structure. 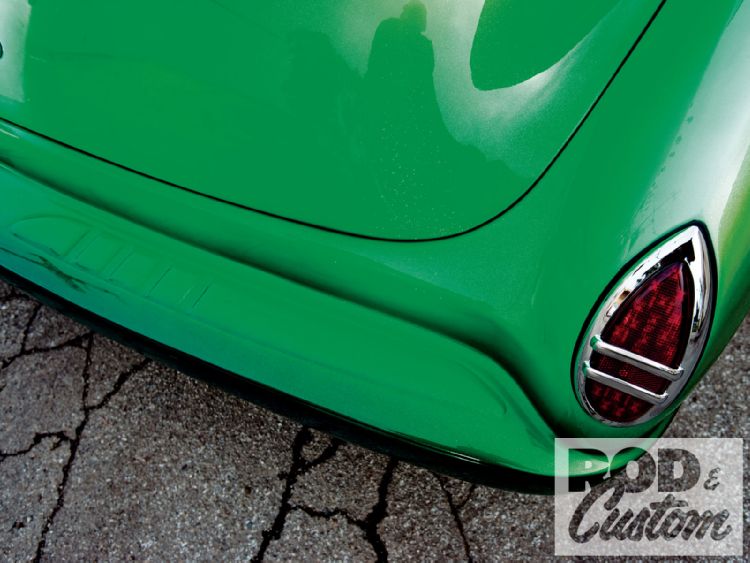 The prior owner may have sectioned the car 6 inches, but the amount John put back into the rockers meant he needed to section the front fenders only 4 inches, which he did above the wheel arches. He left the hood stock, theorizing, "This car is so radical in so many ways that it doesn't need a sectioned hood." He did, however, shave its seam and weld the nose trim to it. He gave the front bumper the same treatment as the rear, only he made the gravel pan. Trimming the grille surround let the parking lights sit directly on that pan.


The grille bar is anything but conventional: it's a camshaft from a 425-horse 60-series Detroit diesel that John split and bent to match the grille shape. "I have a theory that every car has to have a hook, something that sucks people into it, something that's kind of controversial without being too annoying," he surmises. "I got a lot of support and really positive feedback from a lot of people on the HAMB, but not everyone was happy with the grille insert. But there were 10 pages of people talking about it, so I thought, 'I think I got it right.'" But more on that later. 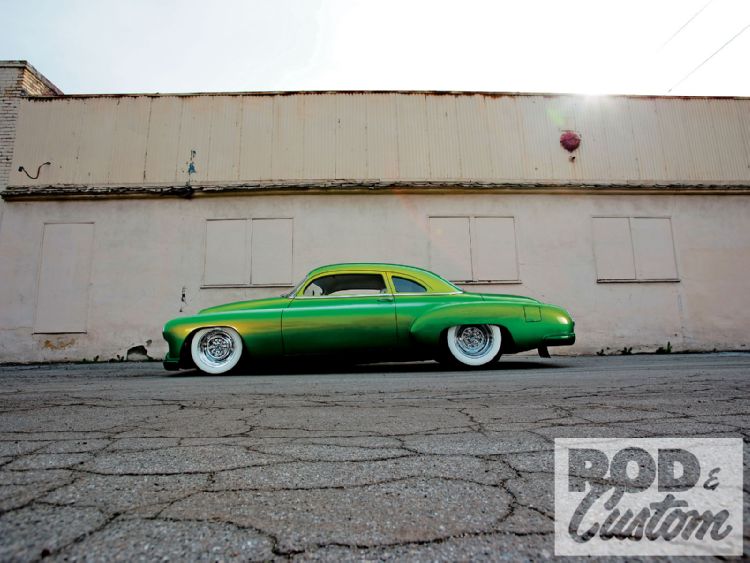 About the time John was sorting out the last details of the body, Ken Ransford and Frank Bevacqua were sorting the details for Top Ten Hotrods & Customs to host one of Gene Winfield's metalworking workshops. "So I asked Bevacqua if Winfield would paint my car while he was here," John says, acknowledging the idea as a long shot. "Well, he agrees to stay another day and shoot it," he says, still pondering the improbability. "My car wasn't even close to paint," he admits. "I had six weeks to get the car from basically a few spots of filler to completely done, primed, and prepped for that kind of paintjob. I do bodywork on my own cars, but I've never done anything that extensive." But after a sky-high quote and after having a few offers fall through, that's exactly what he did. "I ended up taking a full week off of work and actually got it done right here in our basement."

The rest can only be described as a whirlwind. A Sikkens rep and friend of Bevacqua's offered a booth at the Sikkens training center, which turned into a 16-hour marathon custom-paint tutorial. "They were totally behind us 100 percent," John says. "And since it's a training booth it has glass all the way around so students can see what you're doing-which was good so people could see Winfield do the process of a blend job."

Though John said he intended to unveil the car in late February at the Abbotsford World of Wheels, an offer to debut the car at the 61st Grand National Roadster Show alongside Winfield's newly restored shop truck only invigorated his sense of urgency. "My wife [Jennifer] said, 'You know, you're probably never going to get another opportunity to do something cool like that again, so just do it.'"

With only two weeks on the clock, John scrambled, improvising an interior along the way. Ken Ransford offered his car trailer, John's brother-in-law loaned him his truck, and without even a passenger to keep him company, John embarked upon a 1,400-mile journey. "I just put a message on my phone saying I wasn't available for a week and a half, which made a lot of people mad. But oh well, life goes on." 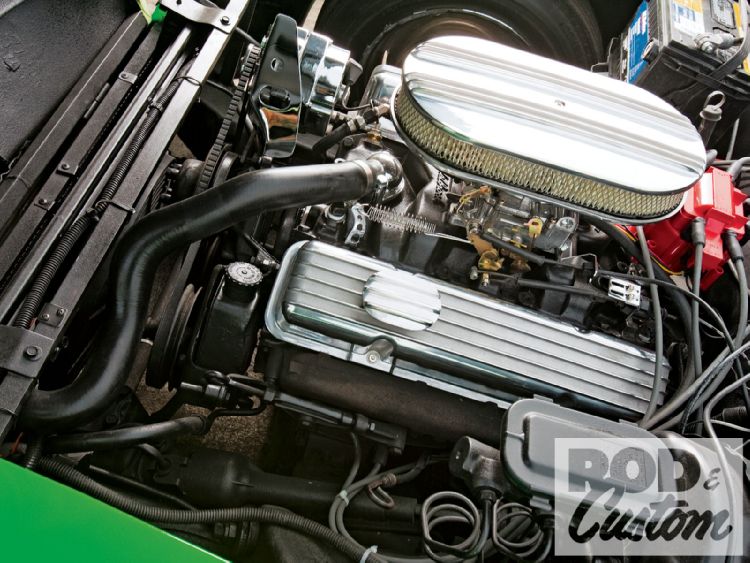 And it paid off. Remember the thing about the camshaft for a grille? "Well, we ended up winning the Kustom D'Elegance Award," John says. "It was funny because people would always say 'Barris would never put anything in a car like that.' Well, we get this award and George starts talking about the car. He says, 'The coolest thing about that car was that it has a camshaft for a grille,'" John says. "Oh that's so cool-that's the thing that he remembers about the car. I was so flattered. Right or wrong, it's just one of those things that makes people talk about the car. I wouldn't have ever dreamed of that happening," John concludes. "Here I am a Canadian guy building a car in a basement out of stuff that I had lying around. I couldn't have hoped to do any better with it-it's not a perfect car; it's just a homebuilt thing. But it all came together. And at the last minute I go there and end up winning that award. It was a Cinderella story you might say."

Yeah, after the way it started, we might just say that.