During much of the 1950s, General Motors sponsored a traveling exhibition dubbed the GM Motorama. While the shows featured all of the products made by GM, the primary attractions were the dream cars (“concept cars,” in today’s vernacular) and the shiny new production models. The dream cars often forecasted something that would appear on GM’s production cars in the immediate future, or some feature or features that might eventually be offered. 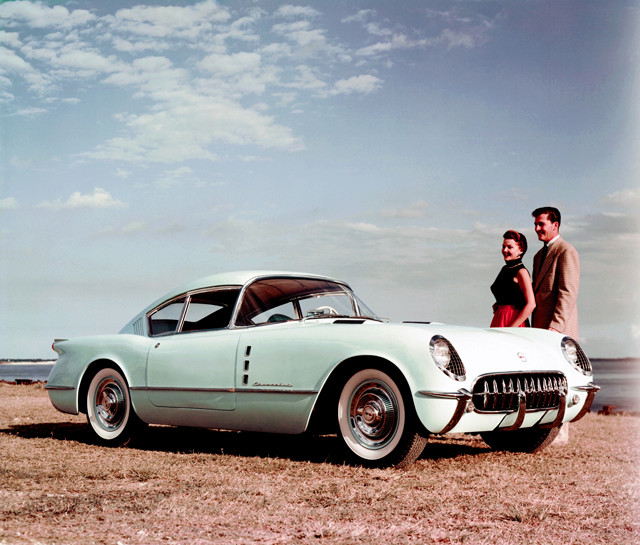 One of the dream cars shown at the 1954 GM Motorama was a 1954 Chevrolet Corvair, a name apparently derived from a contraction of “Corvette” and “Bel Air.” In reality, the Corvair was more of a prototype, really; it was essentially a Corvette modified with a fastback roof sweeping back into what official press releases said was a “jet exhaust-type opening.” Other details of the Corvair included a ventilation system composed of three small rectangular intake vents mounted one over the other on the fenders, and exhaust vents located on the C-pillars which could be opened and closed with a manual control. Engine compartment heat was vented through chromed, slotted vents integrated into twin bulges on the hood. 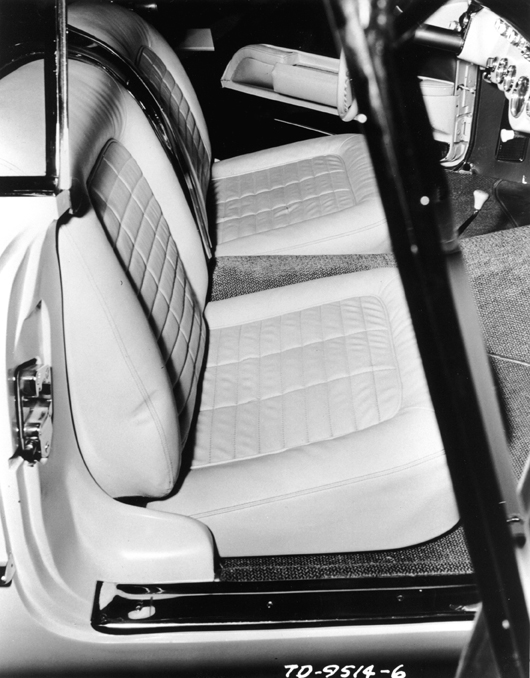 The so-called “jet exhaust opening” at rear was fitted with the license plate mounting, a license plate lamp and a pair of backup lamps, and was filled with a bright metal plate with 270 Chevrolet bow-tie emblems cut into it. The Corvair’s rear styling was considered a styling update for the 1955 Corvette, but no money was released to fund the necessary tooling changes, because of the sports car’s poor sales. 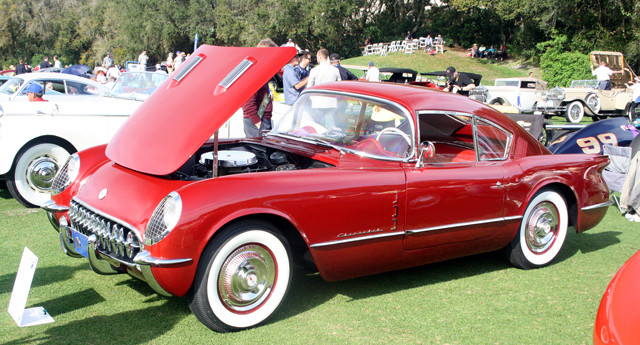 The kick-off of the 1954 GM Motorama was held where they all began, the Waldorf-Astoria in New York City in January. There, on a turntable, was a deep red Corvair with a very light-beige or white interior. It seemingly was shown only once; it was replaced by a Seafoam Green example for the remainder of the show tour held in Miami, Los Angeles, San Francisco and, finally, Chicago.

While the red car was assumed by most people to have been repainted in Seafoam Green, there is strong evidence to the contrary. According to two eyewitnesses interviewed for a 2003 story I wrote, a car described by two different parties as a red 1953-’55-style Corvette fastback was seen at Warhoops Auto & Truck Salvage in Sterling Heights, Mich., sitting atop one or two other cars. This obviously indicates the red car stayed red until GM disposed of it. Interestingly, the car disappeared from Warhoops in the late 1970s, according to both independent witnesses. (Incidentally, Harry Warholak Jr., son of the founder of the salvage yard, does not remember ever seeing the Corvair.)
The upholstery pattern on the seats and door panels of all versions differed completely from that of the production Corvette. A bulkhead as on the Corvette sat directly behind the bucket seats while a filler panel covered the section from the bulkhead all the way back to the bottom of the backlight. A convenient storage compartment and an armrest were built into the door panels.

Interestingly, literature issued by GM stated the Corvair was equipped with a 150-hp engine joined to a Powerglide transmission — the stock arrangement for a 1953 Corvette from which at least one Corvair was likely built. The 1954 Corvette’s engine, according to GM, gained 5 extra horsepower, raising output to 155 hp.

There is conflicting information of just how many 1954 Corvairs were built; a claim has been made for five cars, but absolute proof of this is elusive. The alleged purpose for building five of the cars was that each reflected changes to more reflect a production version –— something GM was supposedly seriously considering until sales were found to be too poor to justify production of another version of the Corvette. Regardless, at least two were built. What ultimately became of the red car is unknown to this day. As for other claims regarding the Corvairs, one says a Seafoam Green car was crushed about 1957.

Regardless of the number actually assembled, none of the original Corvair Motorama cars are known to exist today. Therefore, if one wants a 1954 Corvair, a replica must be built. 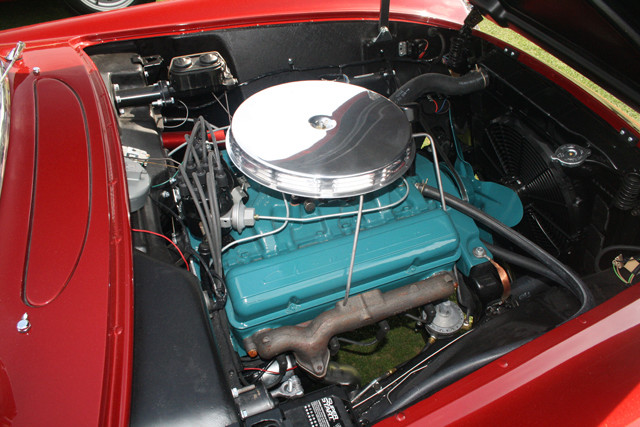 The “Motorama car” replica has become a bit of a fad with car enthusiasts in recent years; several of the 1954 Corvette-based Nomad station wagons (shown with the Corvair at that year’s GM Motorama) have been built, as has a copy of the 1954 Buick Wildcat II. A few Corvair replicas have been built as well, though all of them seem to be the builder’s best interpretation of what GM actually constructed, or reflect their own custom touches. There are no blueprints known to exist of the Corvair, which would be of use in constructing a replica.

Brett Henderson is one such builder of a Corvair recreation. The red 1954 Corvair he built for his customer was completed just in time to be shown at the prestigious 2015 Amelia Island Concours d’Elegance held March 13-15, where it won two awards: the Corporate Award for being considered among the top 10 of the 300 cars invited to attend, a group that included the 1938 Buick Y-Job, and the Best New Coachwork Award. 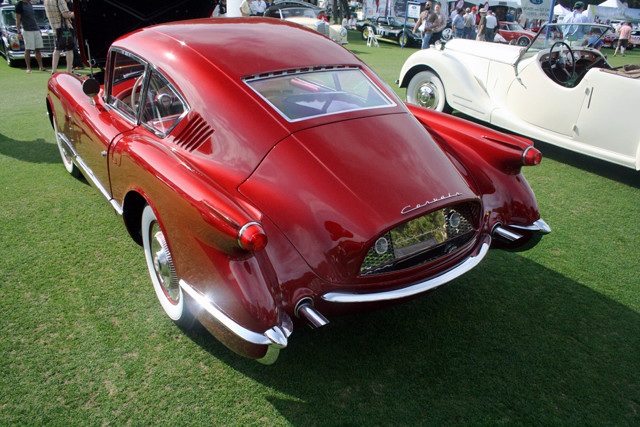 Henderson began his Corvair recreation with a complete 1954 Corvette project car with a no-hit body, a quality much preferred by Corvette enthusiasts. Some years earlier, Henderson, along with Bob Mangold, made a set of molds for the purpose of building Corvair replicas. In building our featured version, Henderson made new molds to get a more accurate roofline. In doing so, the windshield pillars, or A-pillars, were made 2-1/4 inches higher than those of the earlier mold. To make a more rigid body, Henderson’s molds were made in 13 sections and bolted together. This assembly, of course, included the entire fastback roof, but was also composed of the quarter panels and lower rear valence. The one-piece assembly which emerged from the mold was far more crack resistant as a result.

A fiberglass mold was crafted from which a polycarbonate windshield could be made. In fact, all of the glass is polycarbonate. The lower windshield channel is original to the Corvette. However, the upper was made using a 1955-’57 Bel Air type.

The doors of the Corvette purchased for the project were not used. New doors were handmade to accommodate the improved 1956-’60 door latch assemblies and power window mechanisms. (The 1953-’55 Corvettes did not have roll-up windows, but made do with snap-in Plexiglas panels.) Henderson used a stock-looking manual window crank, but it only rotates in a short arc to raise and lower the windows. 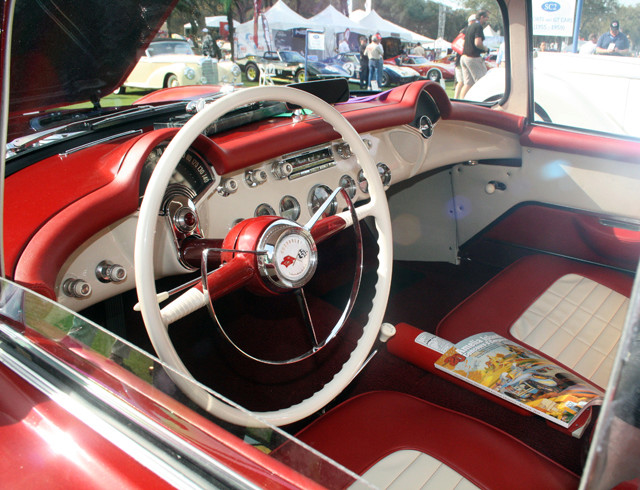 The replica’s interior reflects the preference of the owner as does the choice of engine. A red-and-white two-tone scheme was sewn in the pattern of the original Corvair. Under the hood, Henderson installed a 265-cid V-8, though it was painted blue-green to resemble an early-development engine, Henderson said. It was even stamped with date codes appropriate for the car just to add a more authentic look. With the V-8 went a 12-volt electrical system. (Blue Flame Six-equipped Corvettes used a six-volt system.)

A number of exterior trim pieces were either plasma cut or cut via water jet. As for the exterior color, Henderson got as close as possible to matching the deep red paint of the original Corvair by using the 2010 Corvette color Crystal Red Metallic. No formula was available to mix an exact match to the original car.

Currently, Henderson is building just one more Corvair recreation for a customer. After that, he is moving on to his own personal projects. We look forward to seeing them when they are completed!

Editor’s note: More information on the 1954 Corvair and other GM concept cars can be found in David Temple’s new book “Motorama: GM’s Legendary Show and Concept Cars,” available through www.cartechbooks.com.