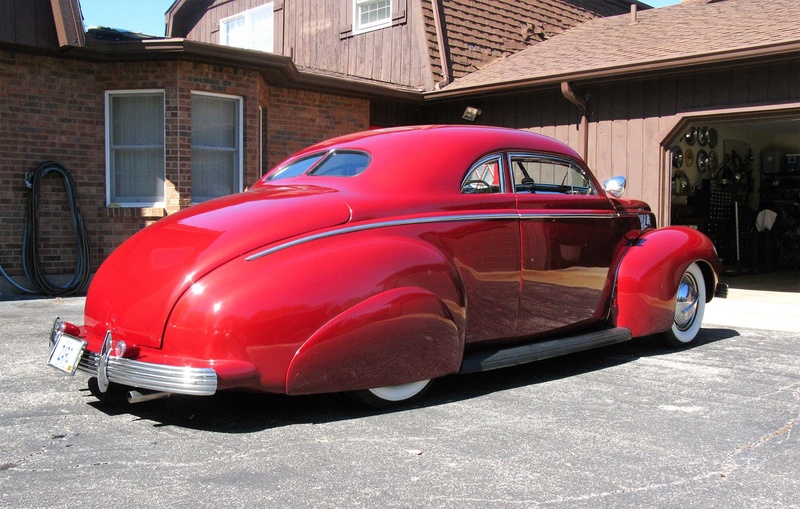 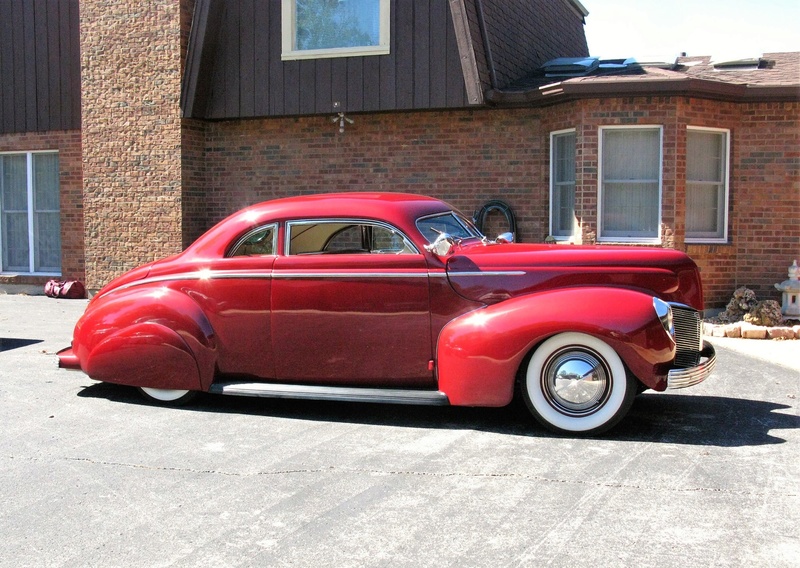 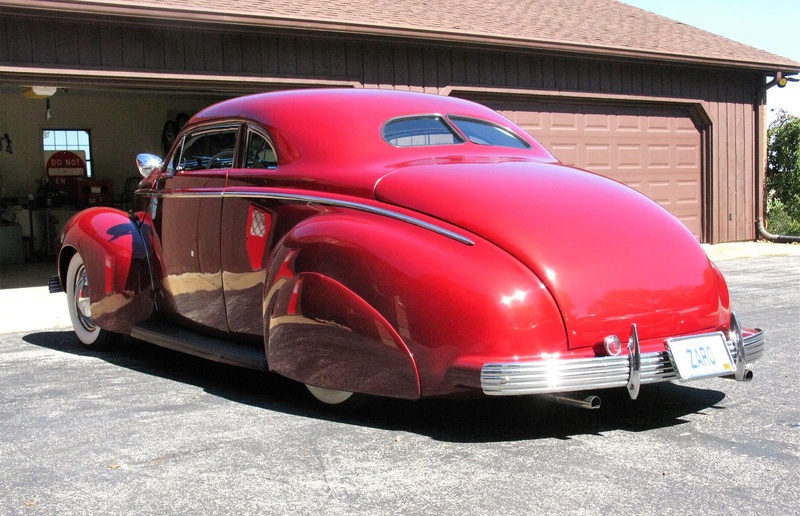 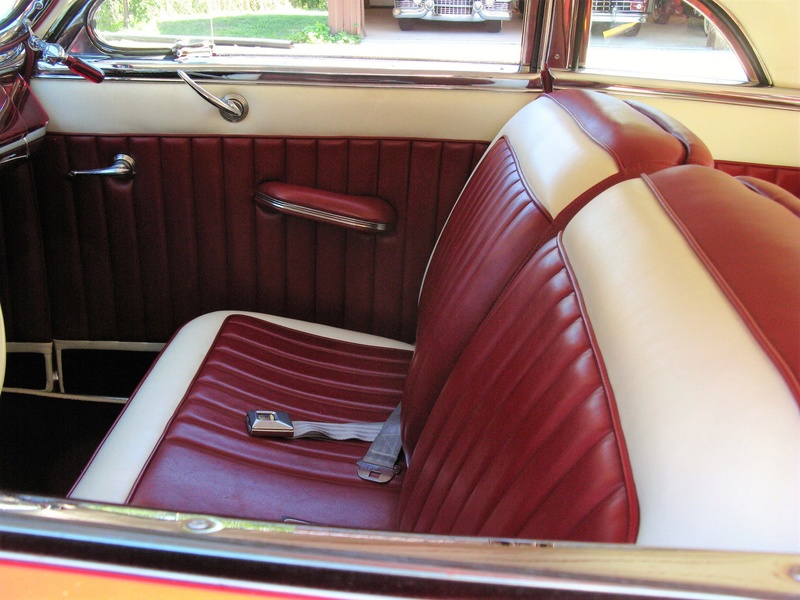 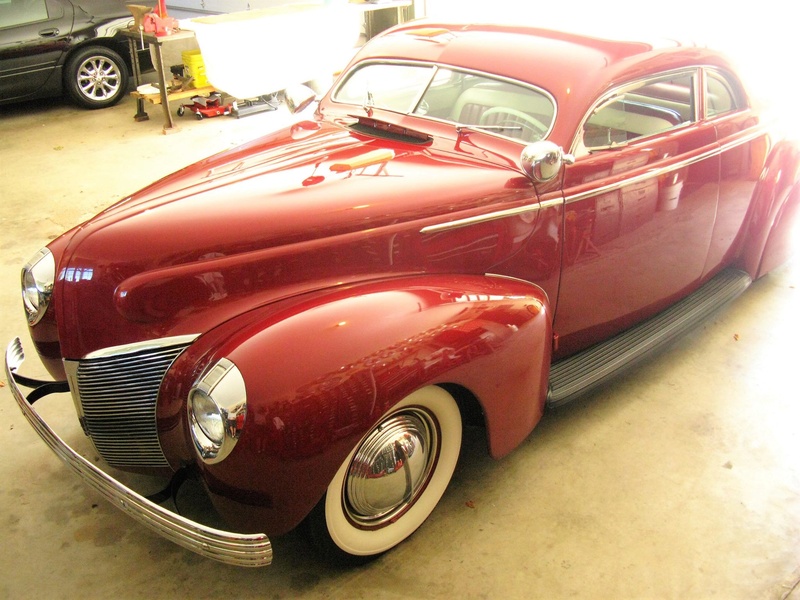 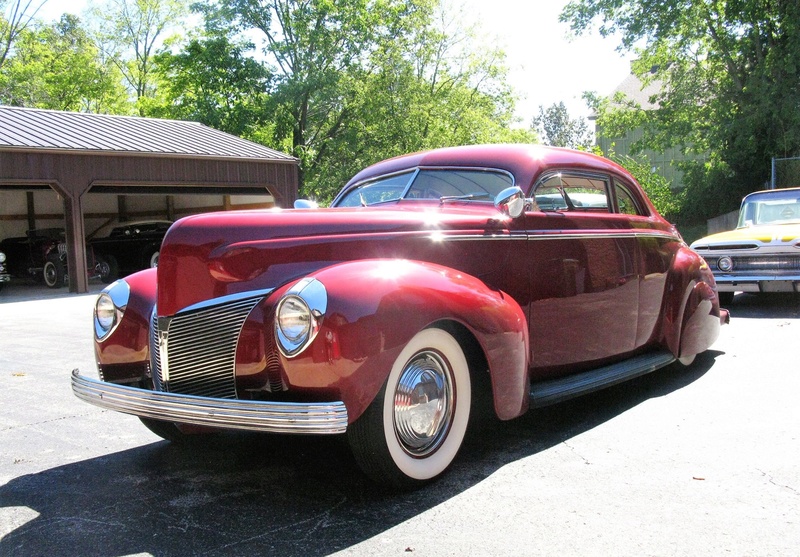 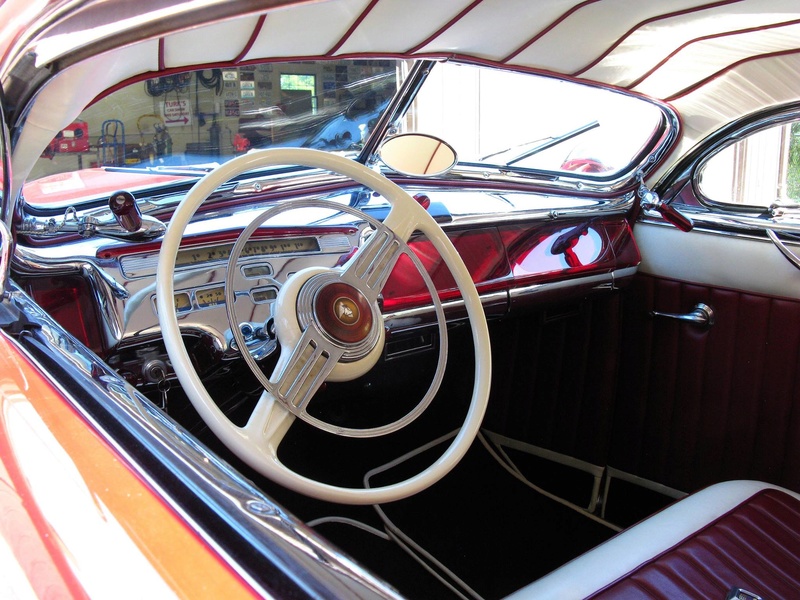 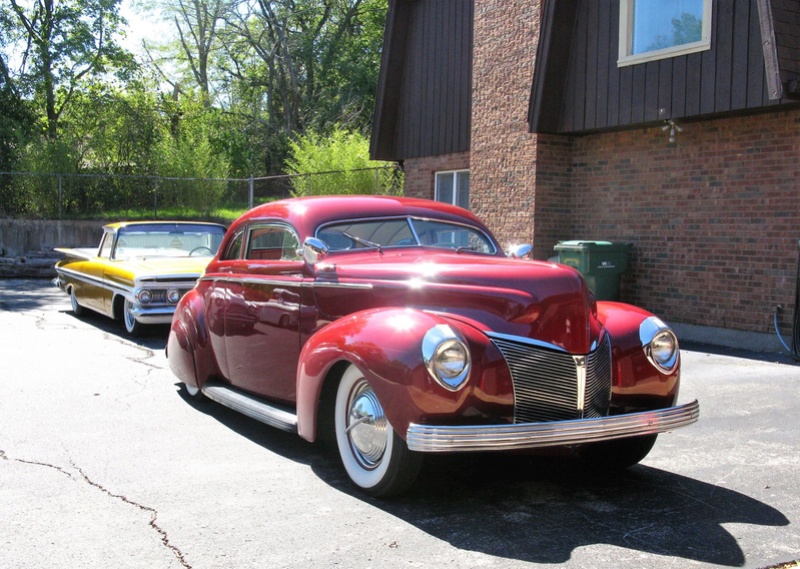 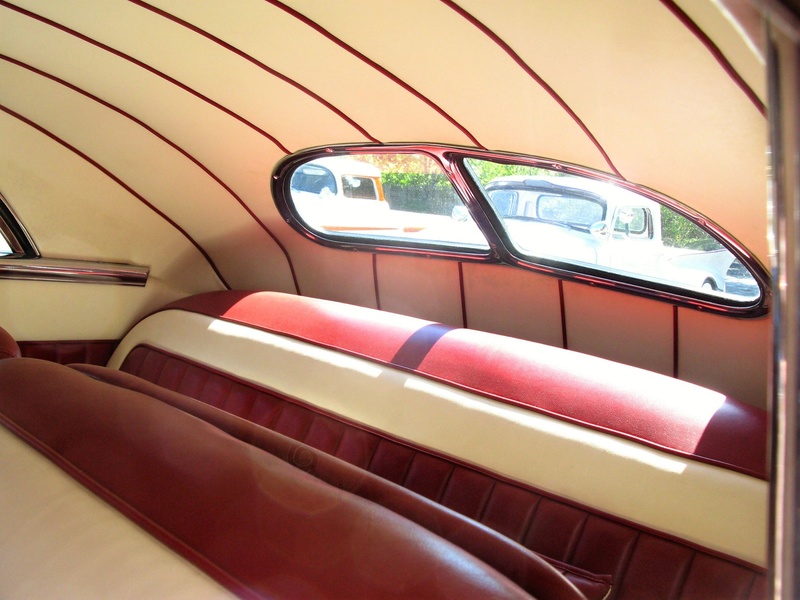 1940 Mercury restyled by Barris Kustoms for Johnny Zaro of Maywood, California. After being discharged from the Navy in 1947, Johnny and his buddy Al Andril decided to buy a pair of 1940 Mercury's. Al lived across the street from Johnny in Maywood, and they were good friends. "Al and I knew each other since we were 10 years old. He moved from San Francisco. We went in the Navy together, and when we got out, we decided we were going to get '40 Mercs and customize them."[1] During their conversations about the coupes, they decided to have the tops chopped. They choose Barris Kustoms to perform the job.[2] In 2011 Justin Kudolla interviewed Johnny about the car for a story in Trend Book 208 Custom Cars 2012 Annual. Justin asked Johnny how he found out about the Barris Brothers. Johnny said that Al must have found out about them. "I didn't know where they were at. We were both down in San Pedro waiting to get discharged and he found the place up there then." The year was 1948, and George and Sam had now moved to larger premisses at 7674 Compton Avenue in Los Angeles. George and Sam talked the two kids into a lot of modifications, including shaved handles and molded fenders. Al's coupe was restyled first. "Mine was a bigger project" did Johnny tell Justin. "Because when I was coming down Alameda, there was a car that pulled into the side of me."[1] Johnny's Merc was mildly restyled when he wrecked it. Modifications included a shaved hood and decklid, shortened side trim, and single bar flipper hubcaps. The accident happened the day Johnny was driving the car up to George's. "The day I got discharged out of the Navy I was driving mine up to George's and a car reversed into the side of me and pushed me into another car."[3] Johnny was still living at home when he crashed the Merc. Sam was in the shop working late the night of the accident, so Johnny called him and said "I smashed my car up, and I haven't gotten home yet.." Sam gave Johnny a ride to his house at 4 in the morning.[1] They had to cut the whole section out on the passenger side; the fender, everything had to go." Barris Kustom Techniques of the 50's - Volume 3 shows a photo of Johnny's smashed up Merc outside Barris' 7674 Compton Avenue shop in Los Angeles. When the photo was taken, Al's coupe had just been chopped. "Sam went ahead and started on Al's and as soon as he got Al's primered, he started on mine." It took Sam about nine months to do the work on Al's car. The experience gained allowed him to complete Johnny's Merc in only six, despite all the repair work necessary. According to Johnny, it was Sam who did the work on his Mercury. Since Johnny had piled the Merc up before Sam started working on it, Sam had to cut the whole side out of the car and do the repairs.[3] 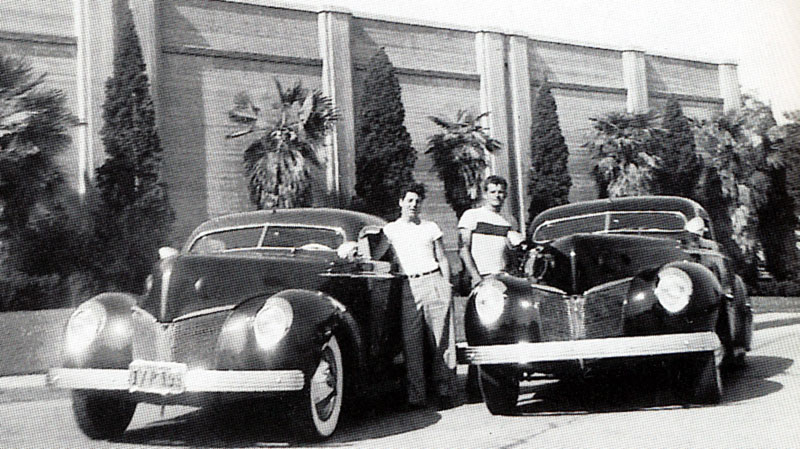 Every time Johnny and Al had a chance, they would get out and go up to Barris Kustoms and work on the cars. "See, when you had George work on your car in those days, it wasn't going to be done unless you got down there and worked on it too. Most of it was easy work, like sanding or some little thing, they did all the major work, believe me. It was at nighttime a lot of times. We couldn't get up there in the daytime. Sometimes George would be there until 12 or 1 am, something like that, if he was spraying something. But as far as bodywork, he would get done at maybe 5 or 6 o' clock. And when I knew George he was living in nothing but a garage with a dirt floor and a little bathroom in Huntington Park. And from there, he got a step up; he started living in Warren Breeland's mother's home over near the shop. Warren, he was going to UCLA. I don't know where George lived when he had the shop in Bell."[1] 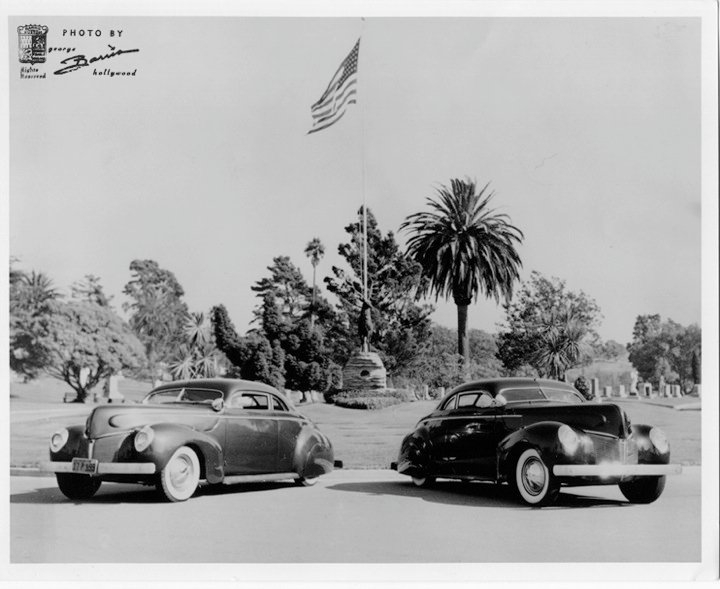 At Barris Kustoms the door handles were removed, and substituted by electric push-buttons. The fenders were molded to the body with an elegant curve on the rear fenders. The top was chopped 5 1/2 inches, and the body was channeled over the frame. Small round motorcycle taillight units were set on either side of the bumper guards. The bumpers were 1938 DeSoto ripple bumpers, and the skirts were steel teardrop units. Up front, the Merc was lowered using a Dago dropped axle. Overall height of the car was 4' 11". Ground clearance was 4 inches in the rear.[4] The body was covered in several layers of deep Maroon lacquer. Single bar Flipper Hubcaps on wide whites and Appleton spots wrapped up the style.[4] [2] 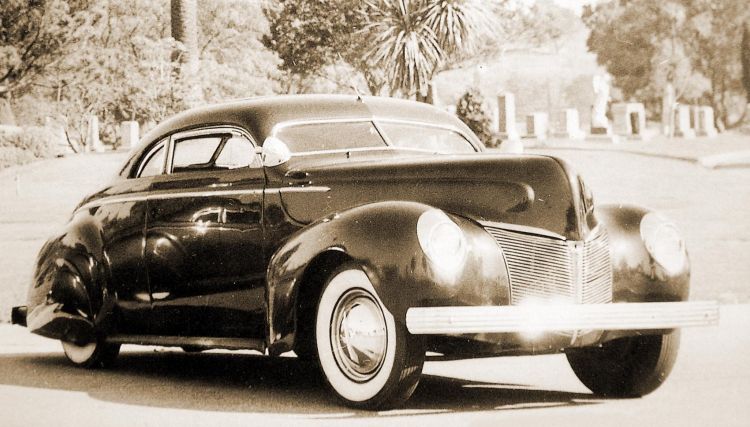 The interior was fitted with heavy plastic dash pieces attached to the chromed panel. Johnny made the dash knobs himself. Top and side panels were upholstered by Bill Hilborn in a two-tone scheme of padded leatherette that matched the polychromatic maroon exterior paint.[4] The enginge was hopped up featuring adding Edelbrock heads and a Weiand Manifold.[4] The car was built almost identical as Johnny's buddy Al Andril's 1940 Mercury. The idea was to create two near identical customs so the two friends could cruise the streets in style and to create quite an impact on the other street cruisers.[5] Both cars were completed in 1948. 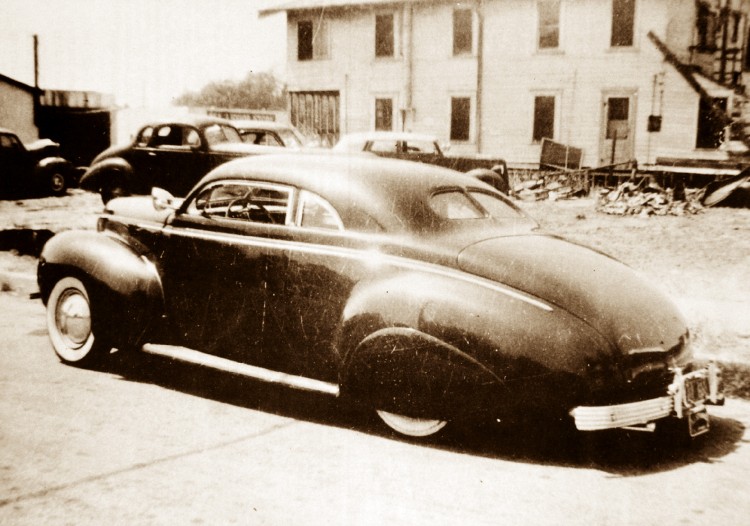 The build took 6 months. "Just as I got my car completed I was taking it over to show this girl and I'd just got a couple of blocks from George's shop and here comes this car around the corner and he just kept coming right at me and finally I had to turn to my right and I hit a parked car and the other guy kept going - he took off. I cried. I'd been waiting all those months and I had to take it back and have Sam work on it some more." Later on Johnny was involved in another accident with the Mercury. "Back then, I was working at the boat house in Crestline and I had to come down to Pomona to pay a ticket. I was coming down this one street and slid around a bend, went over a ditch and there were two trees and I though, oh no! I went right between the trees and put those creases in the running board." Later on the same year, Johnny traded the Merc for John Vara's 1941 Ford. The Merc was pretty rough around the edges, so Zaro had to pay some extra cash to become the owner.[3] 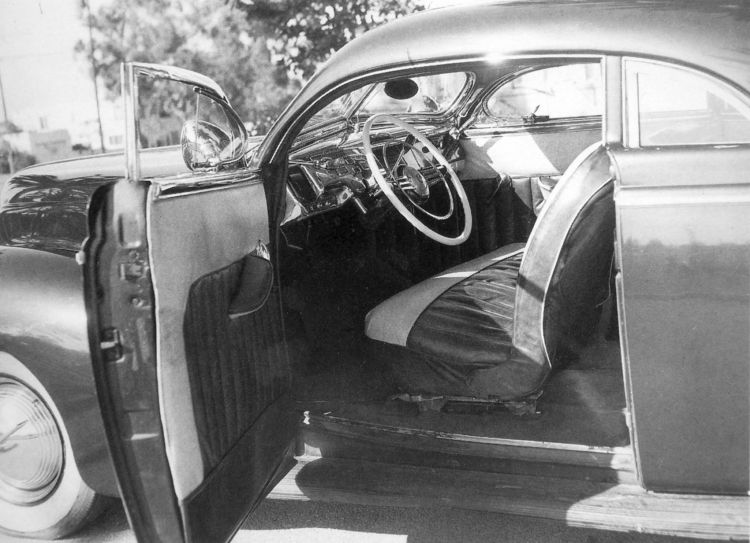 After John Vara, the Merc went trough several owners until custom car collector Kurt McCormick of Imperial, Missouri purchased it. When Kurt bought it, the Merc had been neglected for a long time, and it was in need of a restoration. Over the years, the car had suffered through a series of indignities which included the installation of a Vega grille and a coat of Pepto Bismol pink paint that hid all of the graceful styling done by Barris Kustoms. Kurt was able to confirm that it actually was the real Johnny Zaro Merc. Because of all the modifications, temporary fixes and its advanced state of detoration, Kurt needed to get a donor car in order to restore it back to its former glory. Kurt had Dave Conrad of Kirkwood, Missouri to cosmetically restore it once he found a donor car. The frame was boxed and C'd, and a flat rear crossmember was installed. A 10-bolt Chevrolet rear end was attached to the stock transverse spring. Up front, the add-on independent front suspension was replaced with a Merc solid axle, a split wishbone and a transverse leaf spring. Everything was painted for the upcoming completed body. The body was in a rough condition, between the rust and intended mutilation there was very little which had not been touched by the hand of doom. Dave had to massage every piece of sheetmetal on the car before it could be painted. The next task was to find the Titian red color to duplicate the original look. Jack Stirnemann and Harry Stirnemann were able to custom-mix a batch of Sherwin Williams enamel, enabling Dave to cover the Merc in its proper hue. Kurt created the red plastic that would cover the chrome dash and prepared the engine. Skip Berger machined the Small-block Chevy engine chosen to power the Merc. The enigne was painted red and backed up by a Turbo 350 transmission. When all the body, chassis and mechanical work was done, it was delivered to Dave Fissel's Stitch N Fit upholstery shop in St. Peters, Missouri. The original interior was preserved but the quality of the original work was far exceeded. A maroon and ivory rolled vinyl upholstery with a designed front to rear headliner highlighted with contrasting piping. The restoration was finished during the spring of 1998.[2] 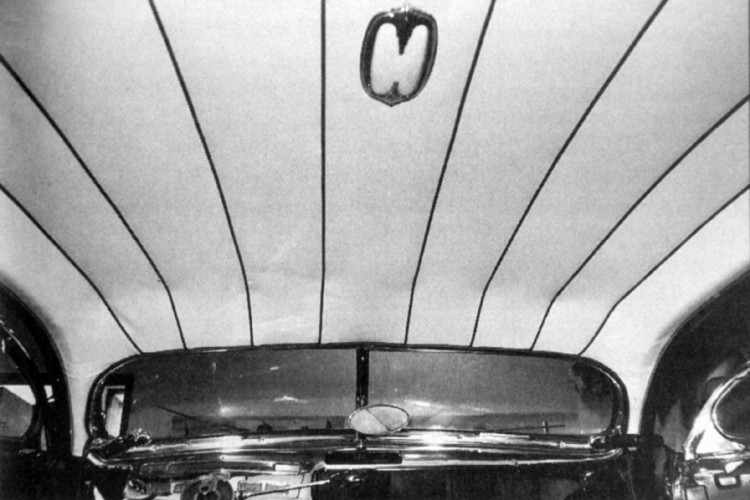 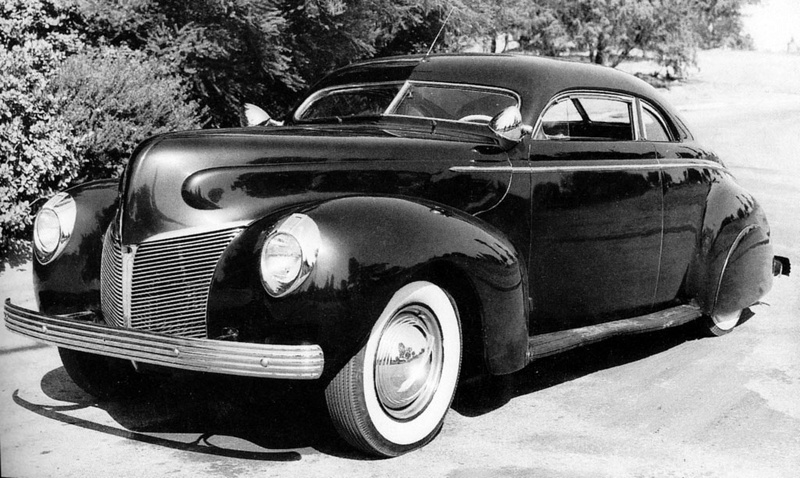 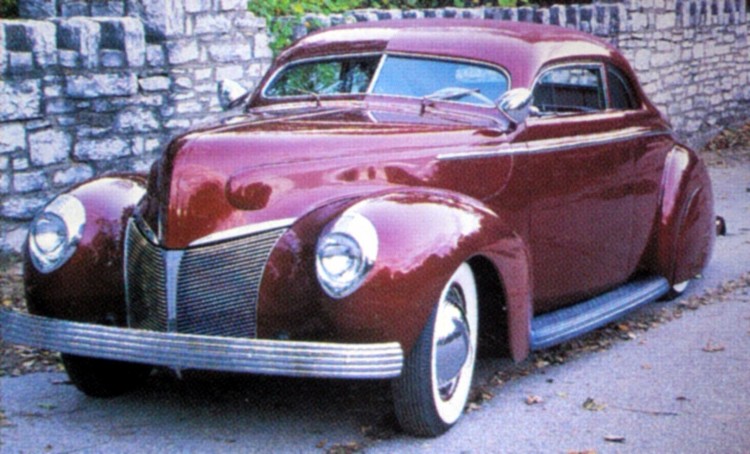