Rod & Custom Feature Car
Gene Martinez
Albuquerque, New Mexico
1958 Chevy Biscayne
Do you ever feel like driving something vintage for the sake of nostalgia? Tired of the regular car you deal with day in and out? The daily driver in your driveway isn't cool and fun like it used to be, right? Well you can either get in debt by buying something off the car dealer lot or do something more practical yet fun, and for some a bit of a challenge. Trying to get the balance of fun and funds to be attainable was Gene Martinez's, of Albuquerque, New Mexico, goal. 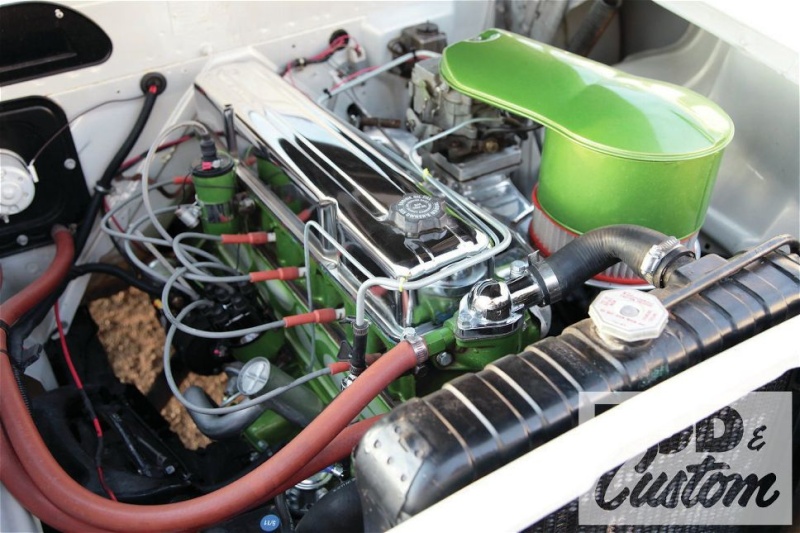 "The car was purchased from a retired school teacher in Corrales, New Mexico. She had it in her backyard and her father was the original owner, bought it brand new in 1958," Gene says. The car was to be passed down to her son to fix up but he never really got around to it. "I worked out a deal with her. During the deal I found out the car only had about 50,000 original miles on it. The only thing was it was stuck in the sand and it took a while to get it out of Corrales. So I had the car blown out and steam-cleaned, then I took it completely apart."
Once Gene got it home he had noticed that almost everything on the car was original but a bit worn out. So, rather than getting some stock parts on the car to get it through inspection and to get the car on the road, he decided to go through all the systems, like the brakes, suspension, and the old exhaust—which had a hole in it, so off it came for the new performance gear. A facelift was also part of the renewal of the Bow Tie.
"I painted the car mystic gold pearl over white, with the roof and lower sides in honeydew melon green with the same mystic gold pearl over it and a real subtle pinstripe around the car. It made a really cool color contrast because if you hung a right or left in the sun the whole car turned a bright gold. That was really cool! 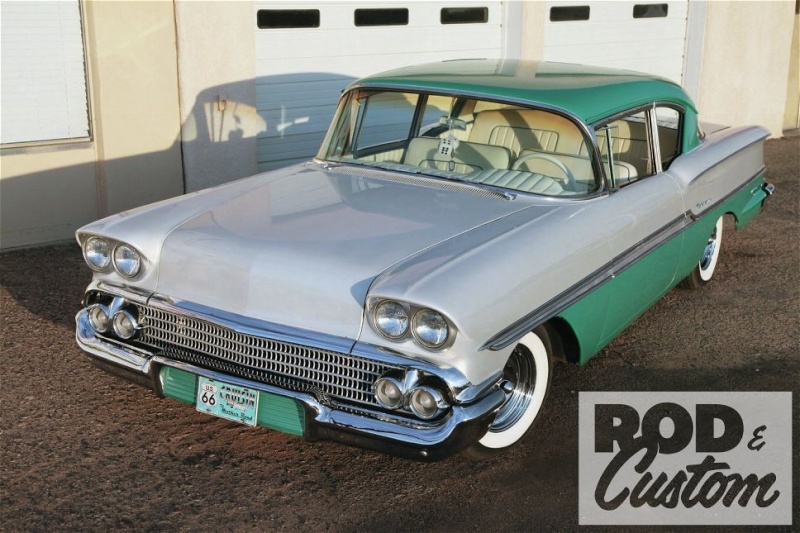 "I molded the frontend, nosed it, decked it, peaked the little trunk opening for the key, and changed the taillights to a set of 1956 Chevy bullet lenses, which I think turned out to be a pretty good deal, as it looked real nice.
"I changed the lights a little bit, had the chrome redone on the bumpers, shaved the door handles, and filled in the louvers on the fenders. All the inner fenders were painted and detailed. I custom-painted the engine block in Volkswagen Viper Green; it's like a real bright lizard green!"
The side covers are done in a white pearl and flamed in a tribal design. The engine is built 0.30 over, with Sefton pushrods, a Dixon camshaft, and he had the head decked. 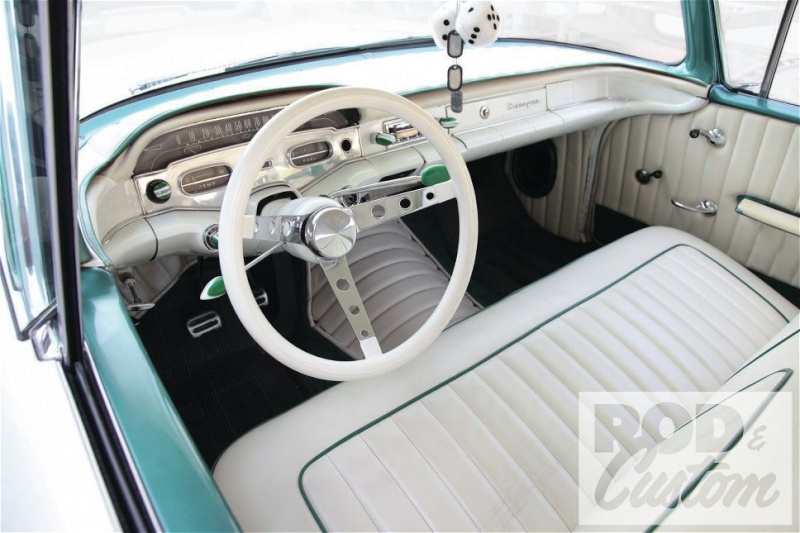 "It had an old-style aluminum manifold for a two-barrel so I had a plate made for it to run a bigger Buick 2-bbl carburetor." Gene then got "Fat Max" to install a stainless custom exhaust with pencil tips that would allow you to unbutton it around the bellhousing, so if you had to change the clutch you needn't have to pull out a lot of stuff to work on it.
Gene did the bodywork, beautiful paintjob, and audio system, and rewired the whole car that now has electric windows and door locks. "My friend Gil Perez helped rebuild the frontend while I rebuilt the steering column shift to work with the overdrive transmission I installed.
"I used 2-1/2-inch lowering springs on the suspension and put a set of Lancer hubcaps over stock 14-inch steelies wrapped in 185/70R14 rubber." 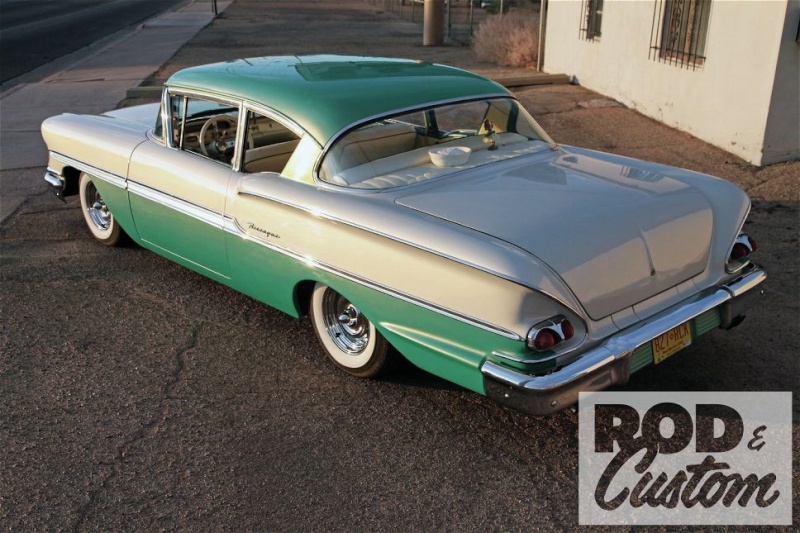 Danny Victor Upholstery did the interior in a white tuck 'n' roll design. The carpet on the inside is dark green and the tunnel is also pleated from the firewall to underneath the backseat. Gene chose to use a bench seat out of a 1956 Buick because it had a better lift to sit in comfort but it didn't seem to change the look of the interior. The trunk has an automatic release and just in case you got locked out of the car there's a door release underneath one of the wheelwells.
"I really enjoy driving the car," says Gene, "it's a lot of fun. I was going for the look of a car I would have driven to high school in 1964." 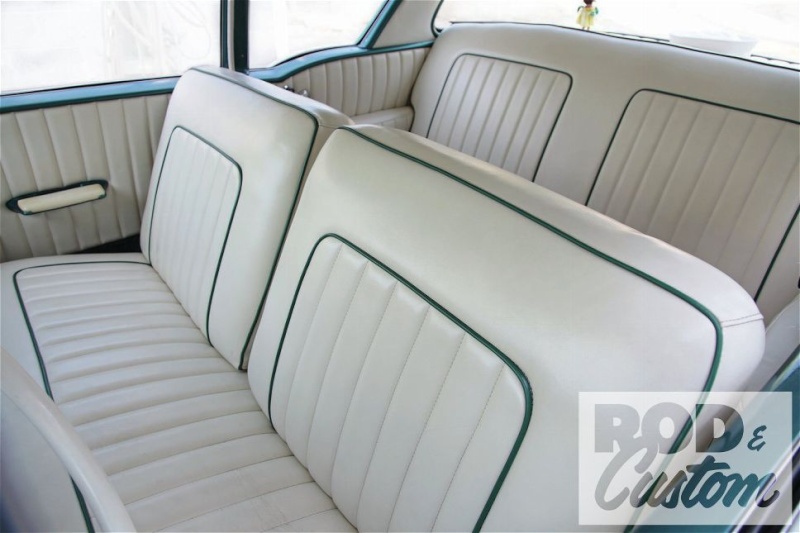