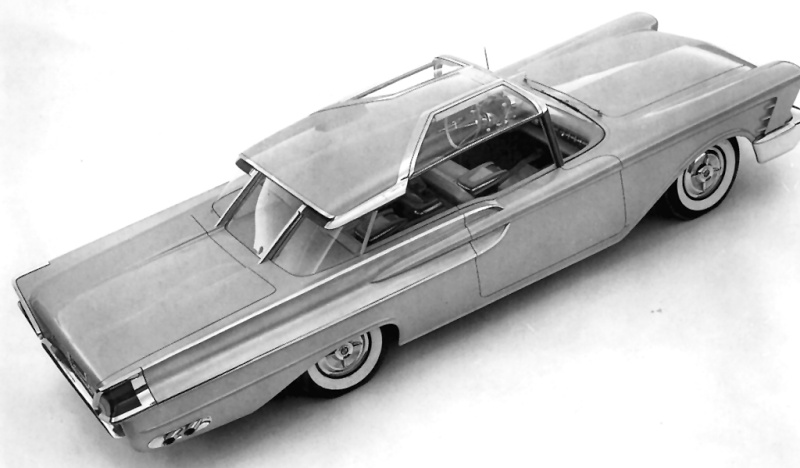 Tom McCahill of Mechanix Illustrated wrote that the 1957 Mercury Turnpike Cruiser was a “Space Age design for earth travel.” No less could be said of the one-of-a-kind car upon which it was based, the 1956 XM Turnpike Cruiser. This show car represented the automotive embodiment of science fiction and foretold the styling direction for Mercury.
The XM Turnpike Cruiser began life in April 1954, as five concepts for a new four-passenger show car proposed by John Najjar, who was in charge of the Lincoln-Mercury Pre-production Studio. These five concepts were given the names Malibu, Monte Carlo, Mystair, Mandalay, and Montauk. Each proposal was drawn in full-scale renderings and shared almost identical dimensions of 212 inches long, 49-51 inches wide, and a 119-inch wheelbase. The most extreme of these five ideas was the Malibu.  It featured torpedo-like shapes mounted high atop the quarter panels that also formed C-pillar supports for a shelf-type roof, offset front, wider rear track, and an extravagant two-tone paint scheme. The Monte Carlo was a bit less extreme with sliding front doors and fluorescent lights running lengthwise on each side of the car. The Mystair perhaps represented the cleverest of the five proposals with its floating type roof with a tubular section that employed water evaporation for air conditioning and ventilation. A convertible body with either clear or chrome Mylar top material and aircraft-like features characterized the Mantouk.  (This proposal could be called the most impractical. Imagine driving under a clear convertible top with the inevitable heat build-up, or driving near a car with a glaring chrome top to blind drivers all over the road! At least the stylists of the day had imagination.) The proposal which impressed the members of the Lincoln-Mercury Studio the most, however, was the Mandalay and it formed the basis for what ultimately became the XM Turnpike Cruiser. The Mandalay carried some aircraft-inspired attributes; beyond tail fins and aircraft-like taillights it had chrome tubes housing small jet assist take-off (or JATO) units on each side for emergency power. 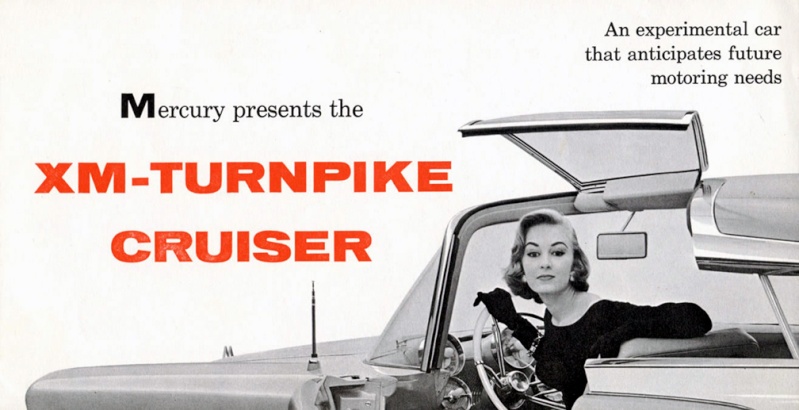 A brochure was produced explaining the special features of the show car. (Author's collection) 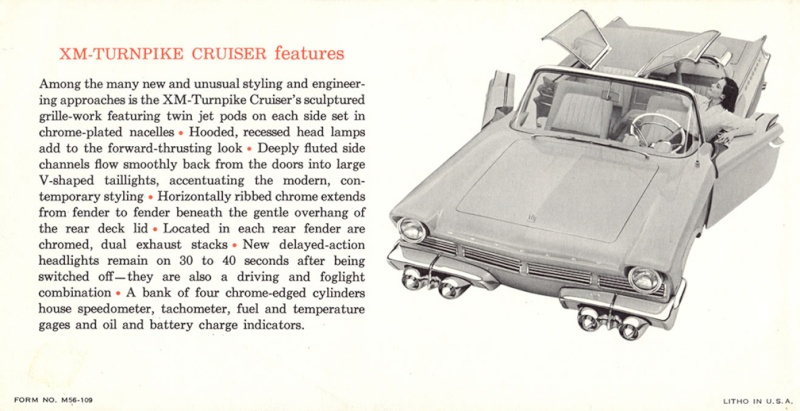 Elwood Engel, who was working under George Walker at the time, is credited with changing the name from Mandalay to XM Turnpike Cruiser. He and Najjar became the head of one of the two design teams that went to work on the project. The other team, headed by Gene Bordinat and Don DeLaRossa, went to work on the project as well. (As was generally the case at that time, two competing teams were assigned to a concept car project.)  Scale clay models in 3/8 size took shape after the team leaders selected what they viewed as the best ideas from each of their staffs. During the fall of 1954, Francis “Jack” Reith, (a member of the group who became collectively known as the “whiz kids” hired after the end of World War II by Henry Ford II) returned from an assignment in Europe and got involved in the XM Turnpike Cruiser program suggesting many changes that eventually ended up in the final product. Also, involved in the project was a young and talented designer working on his first major assignment – Larry Shinoda. Perhaps Shinoda’s most significant contribution to the design of the car was the concave side channel rear fenders terminating into canted V-shape tail lamps. When the two competing clay models were completed, the one handled by the Najjar/Engel team was selected to become the XM Turnpike Cruiser, but it was minus the fanciful JATO units of the original proposal. Jack Reith went one step further; he later suggested making it the basis for a production car instead of the Monterey XM-800, another experimental which had already been approved. 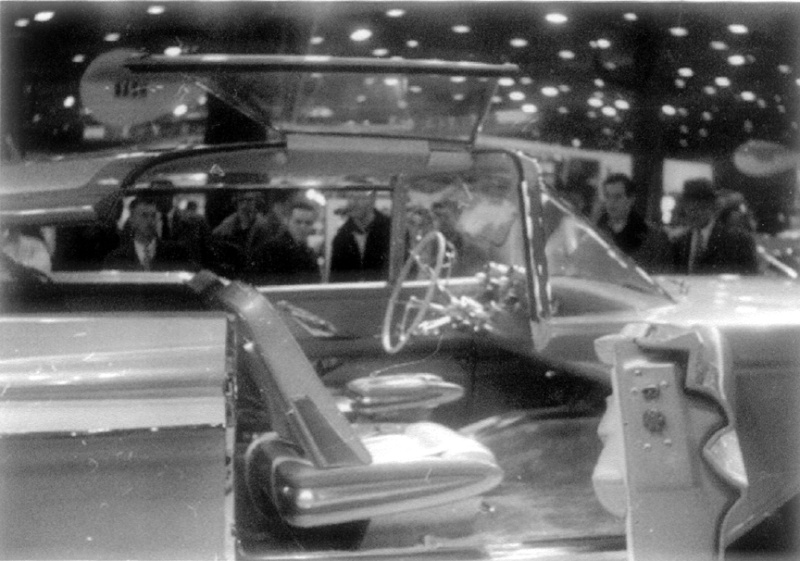 The interior of the XM show car had four leather-covered bucket-type seats. 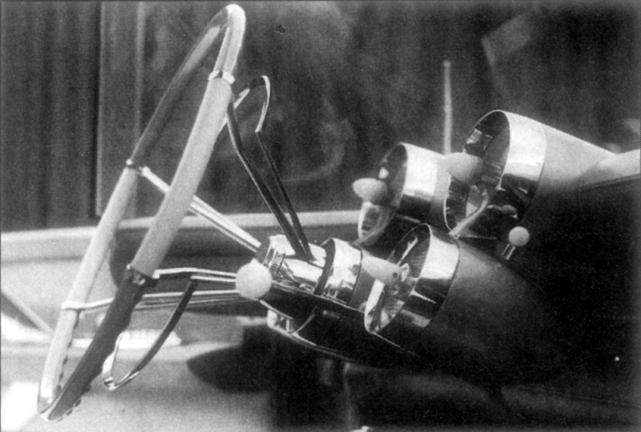 Instrumentation was grouped in pods.
Near the end of 1954, the way was cleared to build the XM Turnpike Cruiser as a fully operable vehicle. Ghia in Turin, Italy, was selected to fabricate the car in metal at a cost of $80,000. A scale plaster model, numerous full-scale drawings, chassis, and drivetrain were sent to Ghia. During the construction of the XM, Ghia made several changes to the design and apparently they were done without seeking Ford’s approval. A couple of the alterations involved the shape of the windshield and deleting the vent windows. As a result, the suggestion was made that for future such projects, Ford personnel make more trips to the Ghia facility to make sure things were being done as intended.
During the early part of 1955, Reith recommended that the XM show vehicle serve as the basis for a production Turnpike Cruiser, and to forget the XM-800 based Monterey, but he did not stop there; Reith also proposed making the Turnpike Cruiser a distinct car to compete with cars like Chrysler’s New Yorker, Buick’s Super, and Oldsmobile’s 98. He convinced higher-ups that this would be a good decision and was made General Manager of the newly separate Mercury Division. In January 1956, Reith negotiated with the Indianapolis 500 racing officials to have a ‘57 Turnpike Cruiser convertible pace that year’s race. 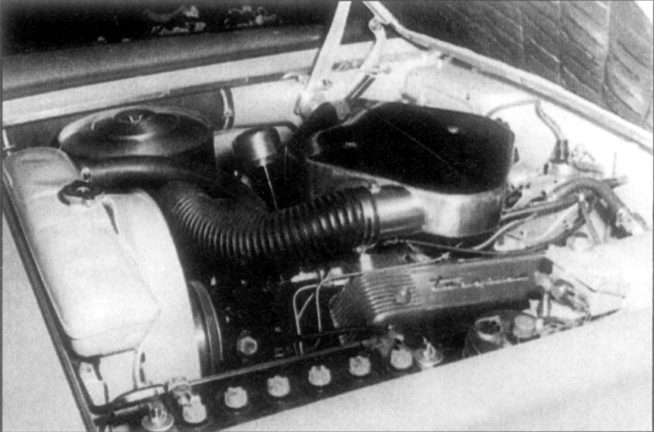 A modified 312 V-8 coupled to a Merc-O-Matic transmission powered the show car.

One month prior to this decision, Ghia delivered the 1956 XM Turnpike Cruiser to the Styling Center where it received a few minor alterations that included the addition of stainless steel inserts for the side channels (which were previously painted a darker color than the rest of the pearlescent persimmon colored car) and replacement of the black sidewall tires with whitewalls. The completed show car featured a number of gadgets and features sure to impress anyone who viewed it. The engine was a 312 with twin four-barrel carburetors; the transmission was a regular production Merc-O-Matic automatic. Exhaust exited through chrome plated brass ports in the quarter panels behind the rear wheels. The front end was highlighted with a concave grille, hooded headlights, and a pair of chrome jet engine like pods housing parking and turn signal lenses on each side below the split bumper. The roof featured “T” top, flip-up panels that opened via an electric piston/cylinder arrangement when a door was opened, but an override switch allowed opening the panels without opening a door. The three-piece rear windshield’s center section lowered electrically and was later employed on the production Turnpike Cruiser as well as other Mercurys and Lincolns that followed. The panels allowed for easier entrance and exit of the 52.4-inch high car. Interior styling was no less imaginative. Four leather-covered bucket seats awaited the driver; each set of front and rear seats had a raised armrest that contained ashtrays and cigar lighters. The instrumentation was arranged in pods and consisted of speedometer, tachometer, plus fuel, temperature, oil, and battery gauges. Power enhanced items included steering, brakes, and windows. 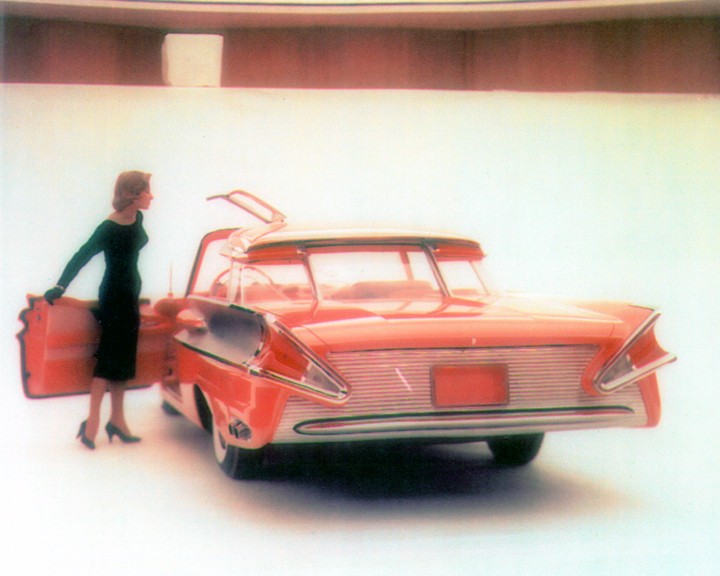 Concave side channels terminated in canted, V-shaped tail lights. (Author's collection)
The finished XM Turnpike Cruiser was publicly shown for the first time at the 1956 Cleveland Auto Show. Showing the new experimental car that Mercury literature of the day called, a “Preview of the Future”, was performed in a manner as extravagant as the car itself. A specially designed trailer with large plexiglass side panels was used to transport the vehicle; a standard Ford COE tractor pulled the trailer and its unique cargo. Both the tractor and the trailer were painted to match the show car. The right side of the trailer opened up and extended outward to allow the car to be turned 90 degrees. The platform that supported the car was equipped with steps and handles to allow show attendees to step up for a close-up view. The one-of-a-kind Mercury was shown at the Detroit, Chicago, and New York Auto Shows plus various dealerships around the country. 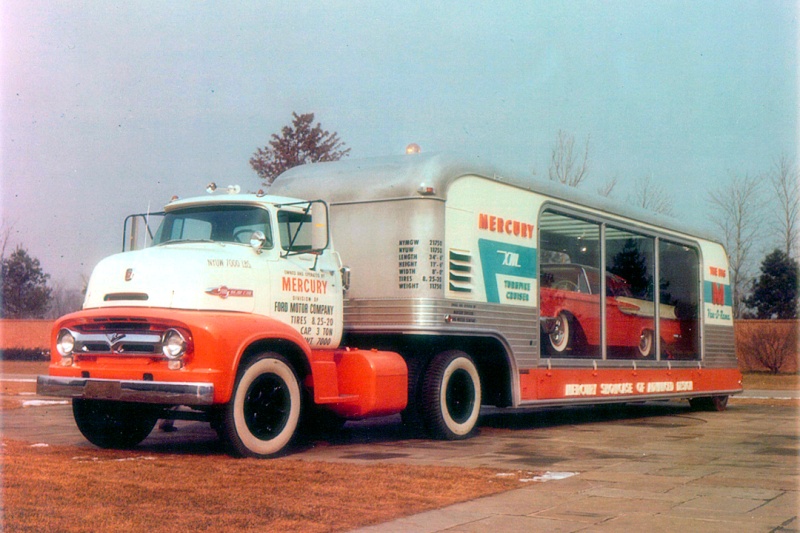 A specially designed trailer with large plexiglass side panels was used to transport the vehicle; a standard Ford COE tractor pulled the trailer and its unique cargo. (Author's collection)

The production 1957 Turnpike Cruiser and Montclair models did not sell as well as Jack Reith predicted. Consequently, he was removed as head of the Mercury Division and offered the position as head of Ford of Canada; he instead elected to resign from the company on August 30, 1957. The Mercury Division was combined with Edsel and Lincoln afterwards and the Turnpike Cruiser was demoted to the Montclair series for 1958, while the Park Lane took the prestige position for Mercury.
The 1956 XM Turnpike Cruiser became a symbol of failure for those at Mercury and it sat outside in a parking lot behind the Lincoln-Mercury Division offices. At some point in 1958, Lincoln-Mercury Sales Manager, Joe Bain, came into the office of Benson Ford and said he was tired of seeing the car and it should be hauled away. Benson Ford must have agreed with his friend because the task was assigned and carried out. For a mere $300 the experimental car with an original price tag of $80,000, was sold to Jim White, the Vice President of Dearborn Tube and Steel, one of the contractors Ford used to build pre-production vehicles. (The trailer used to haul the XM was sold separately, but to who is unknown.) White stored the car more than a decade outdoors where it deteriorated and received its share of attention from vandals. After numerous attempts to buy the car, a body shop owner named Baker purchased the vehicle for $500; this was in 1971. By this point a number of parts were missing (such as the intake, twin carbs, and air cleaner) or were damaged (such as one of the plexiglass flip-up roof panels and hood). The upholstery was ruined as a result of the windows being left open. Baker sold the car for $3,000 in 1979, to a collector named Ray Sabos who owned a 1957 Turnpike Cruiser. Sabos stored the car until 1982, and then sold it for $10,000 to another collector who had intentions of restoring it.
For more photos of the XM Turnpike Cruiser see the website of the Mercury Club of Norway at, http://www.mercuryclub.no/ 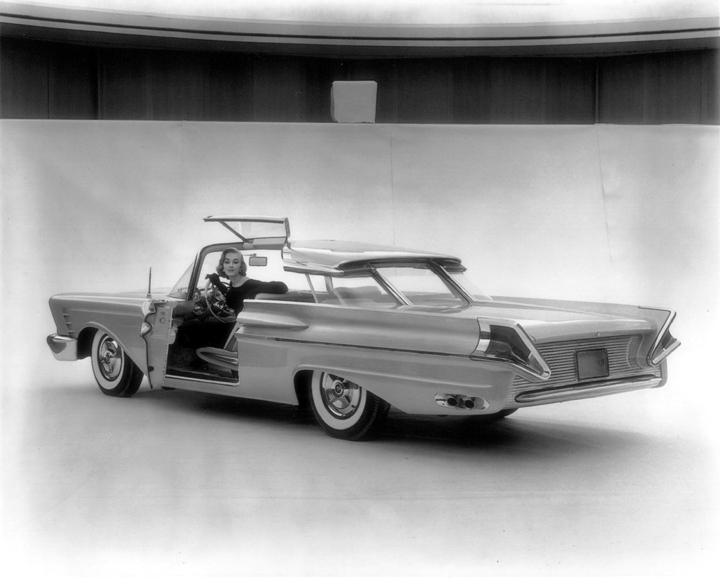 Authors note:  Many thanks to author Jim Farrell for supplying rare photographs and information for this article. Without his assistance this article would not have been possible. Jim has performed extensive research on the history of Ford’s show vehicles built between 1932 and 1961, and together with his wife, Cheryl, has written a book on the subject titled, Ford Design Department, Concept, and Show Cars, 1932-61. The XM Turnpike Cruiser is covered in greater detail in this book. The book can be purchased through his website, http://jandcfarrell.com/ 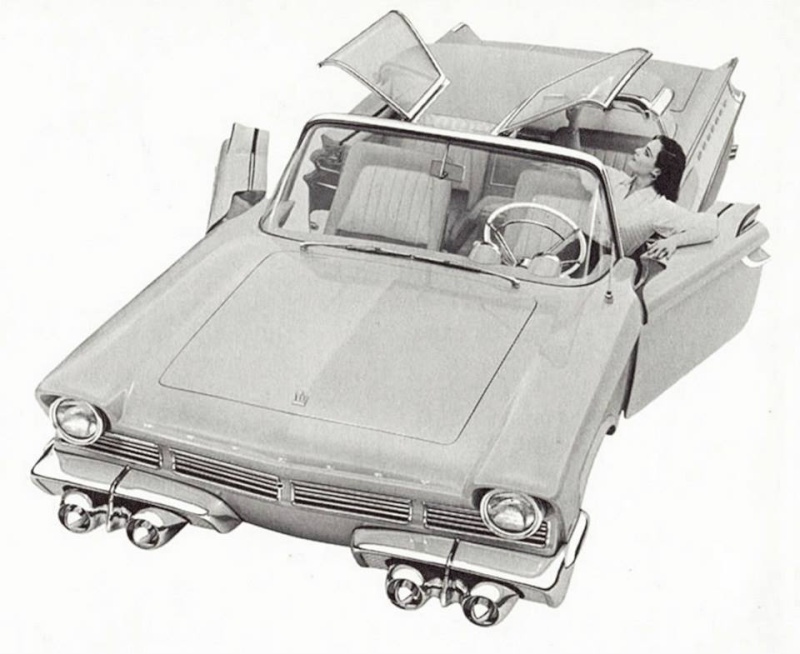 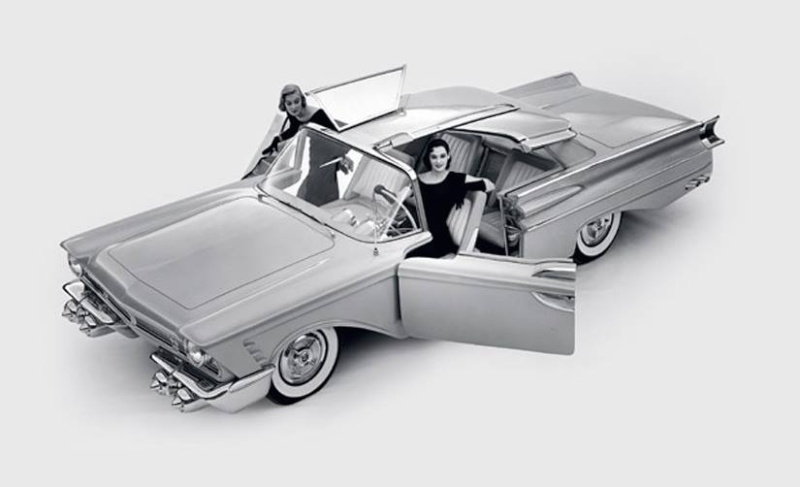 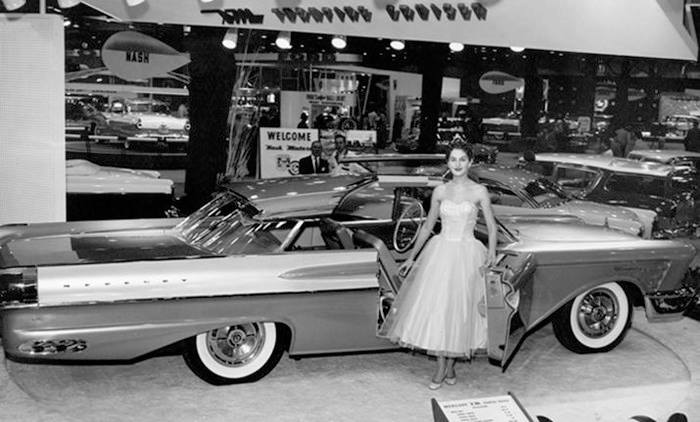 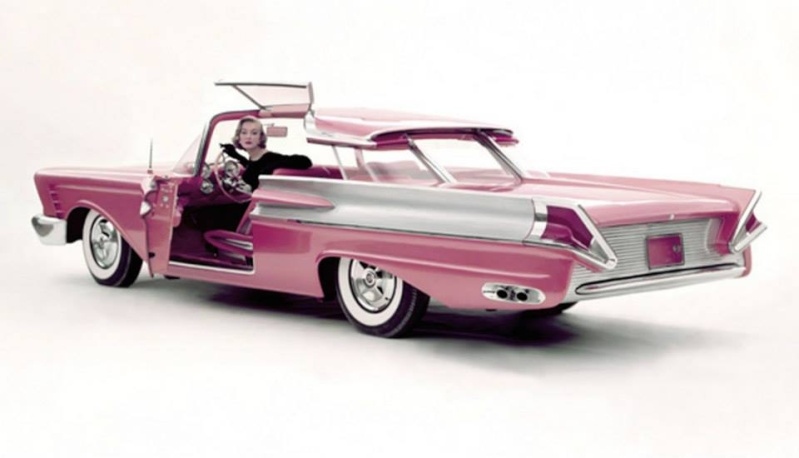 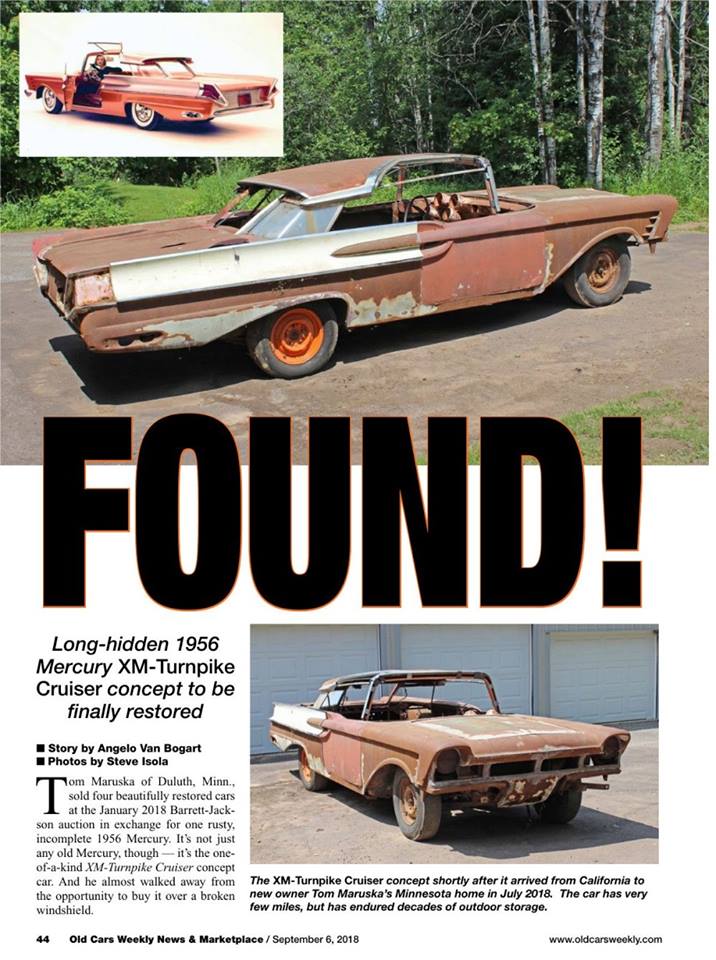 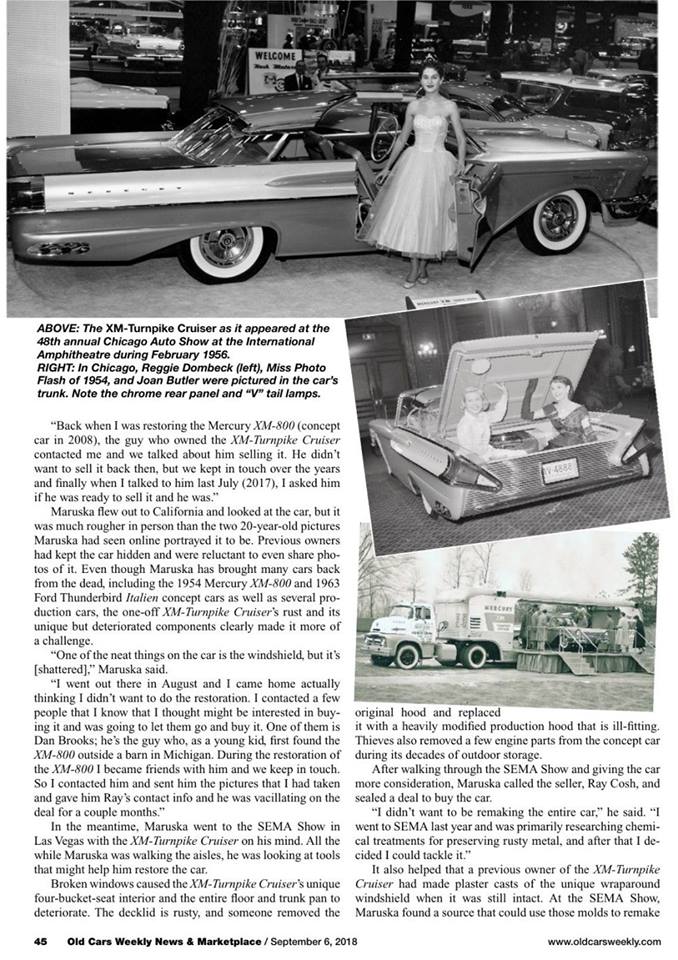 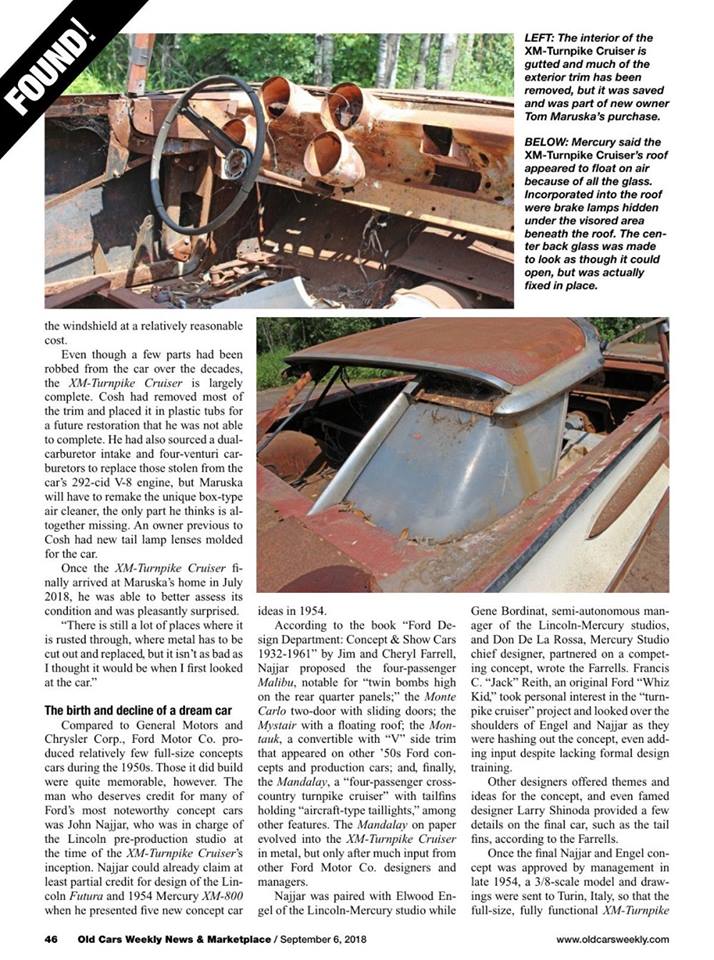 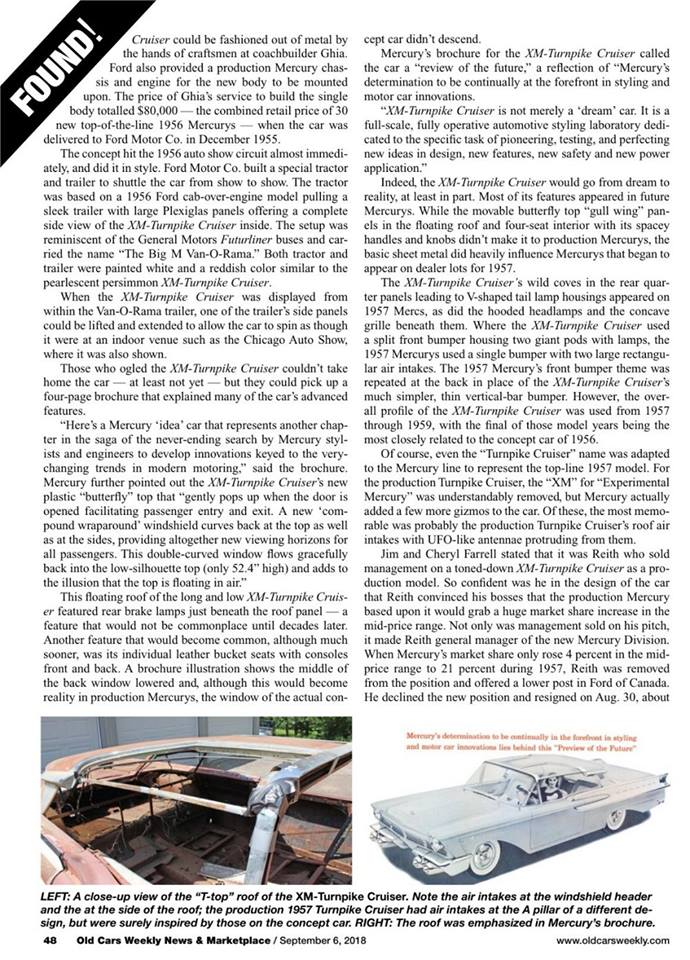 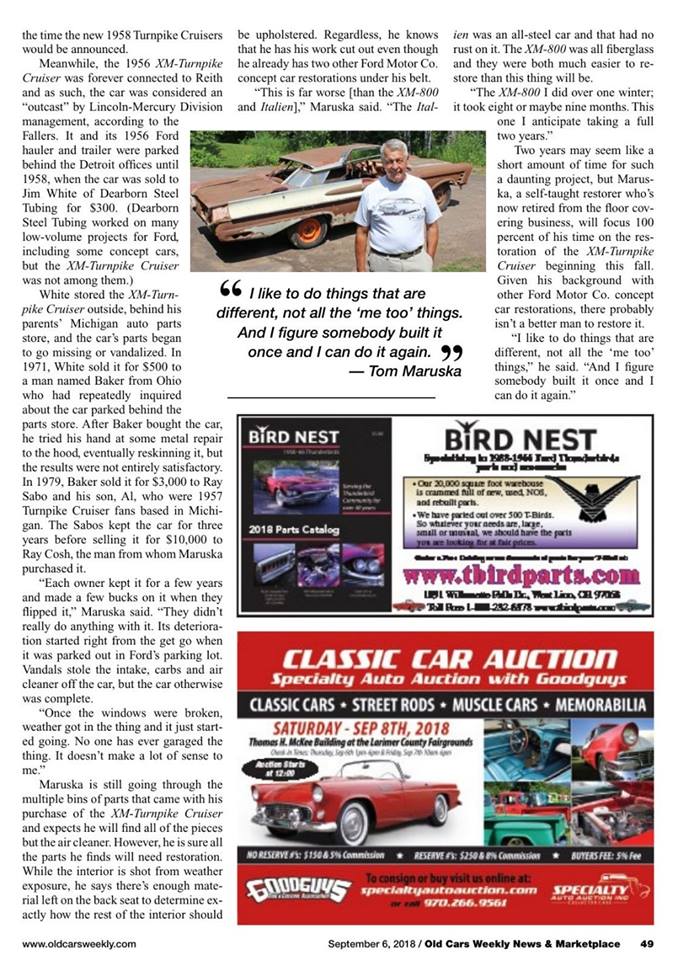 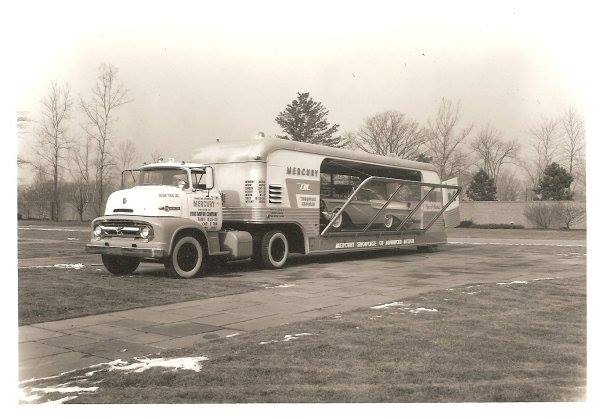 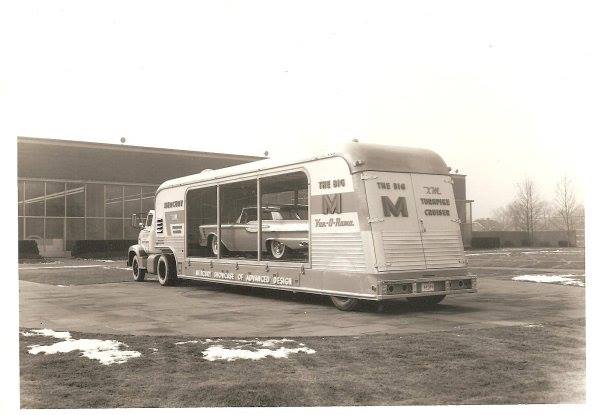 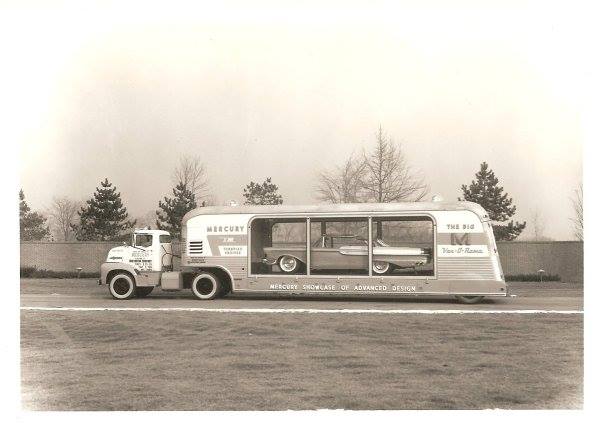 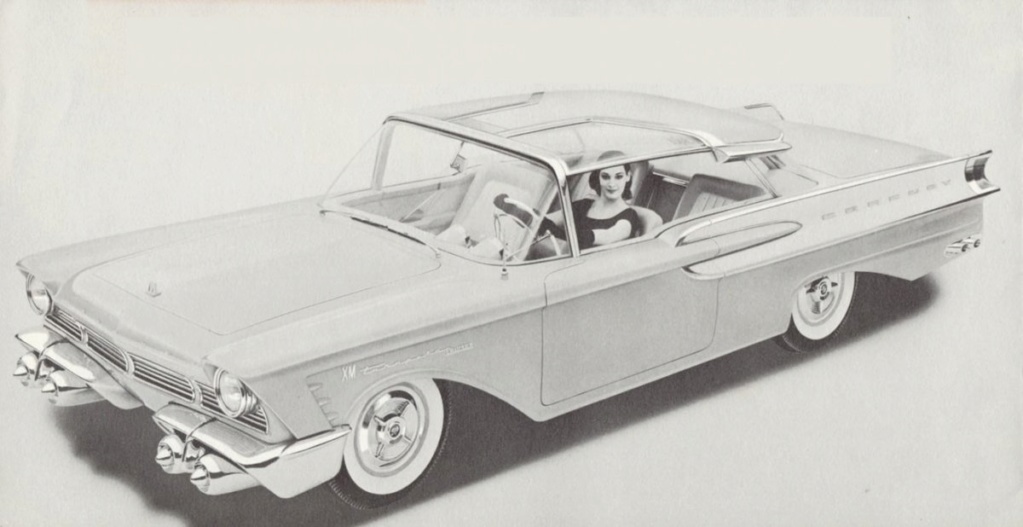 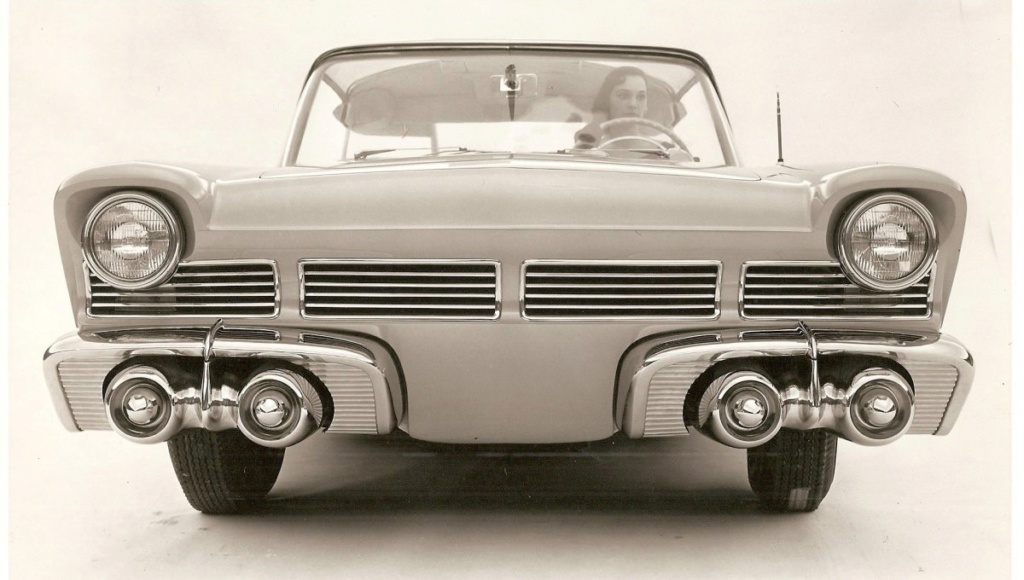 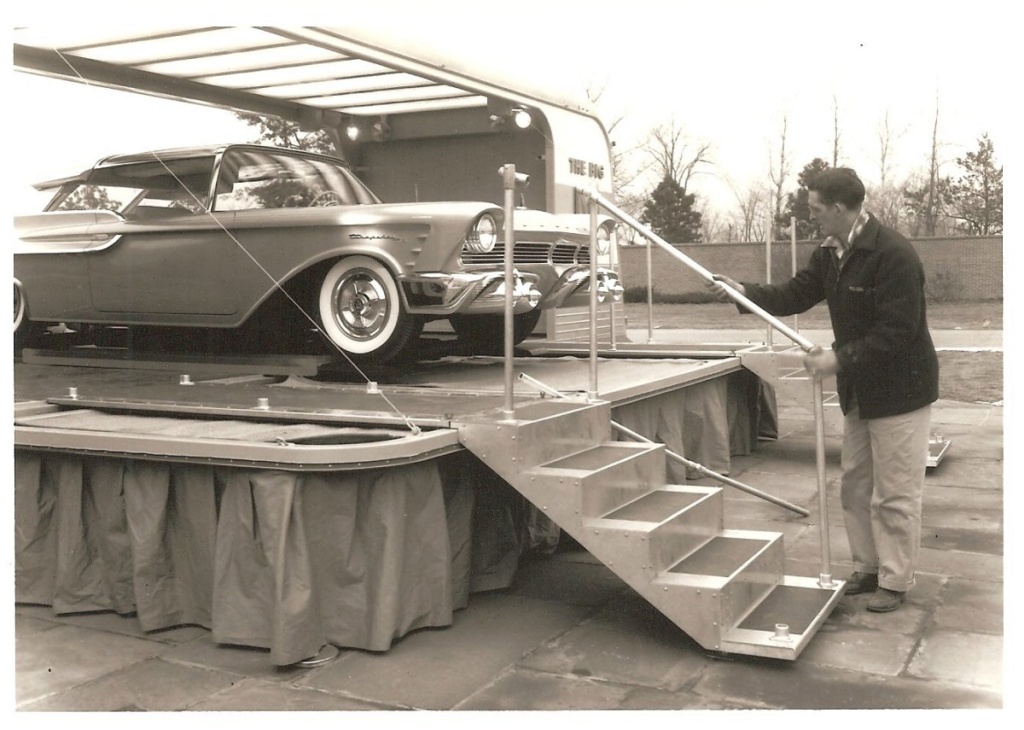 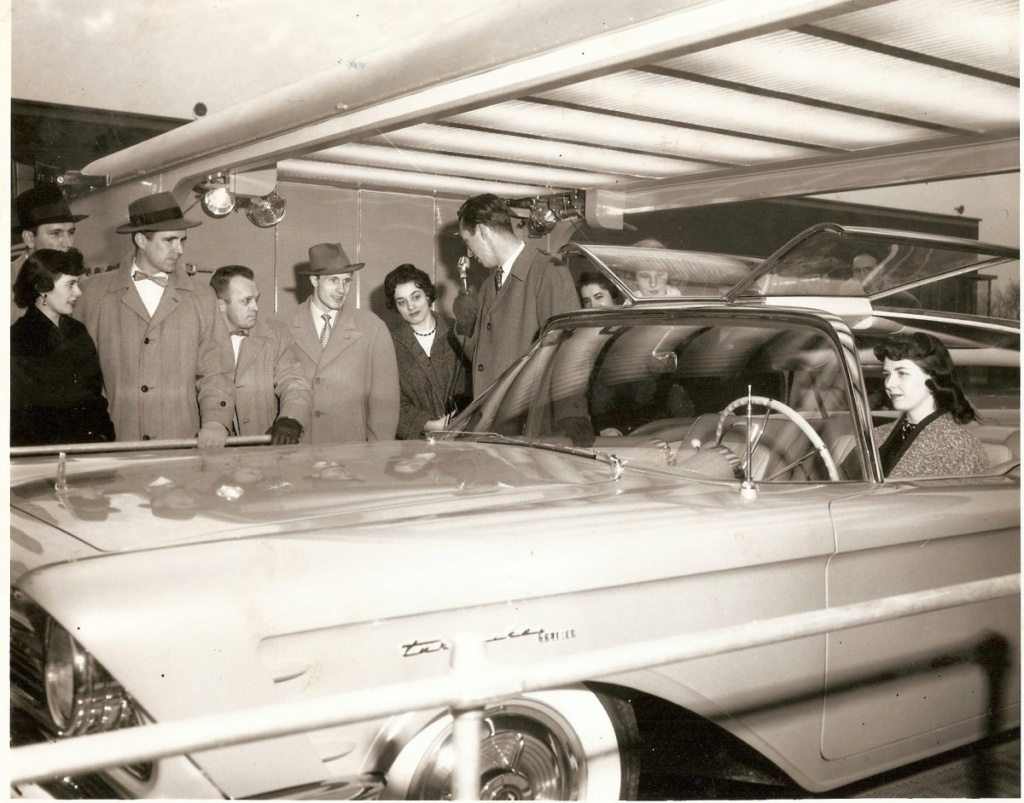 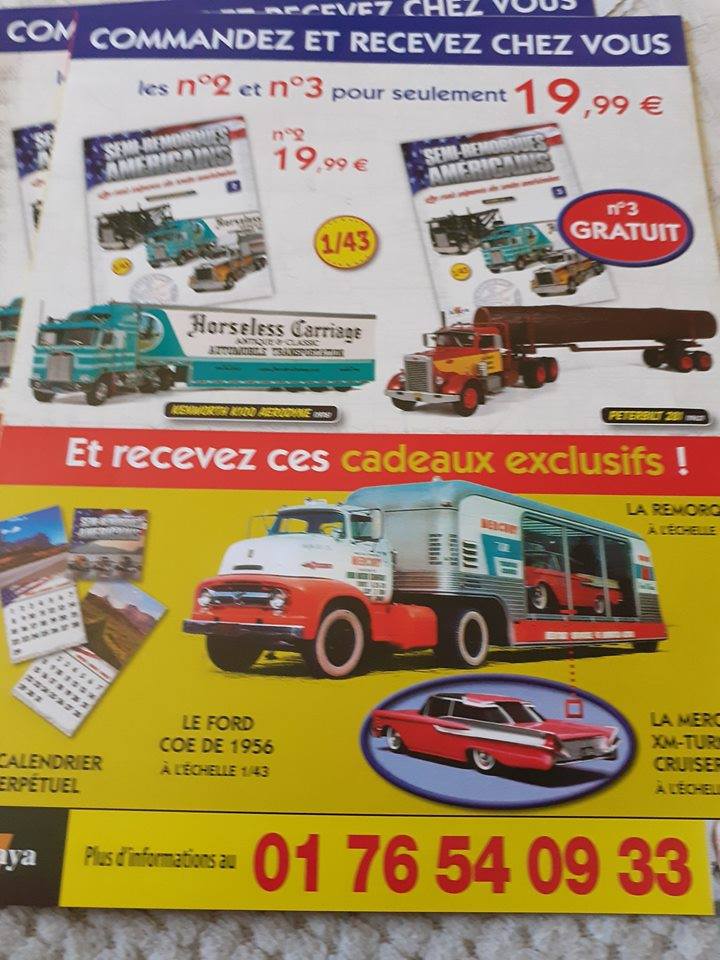 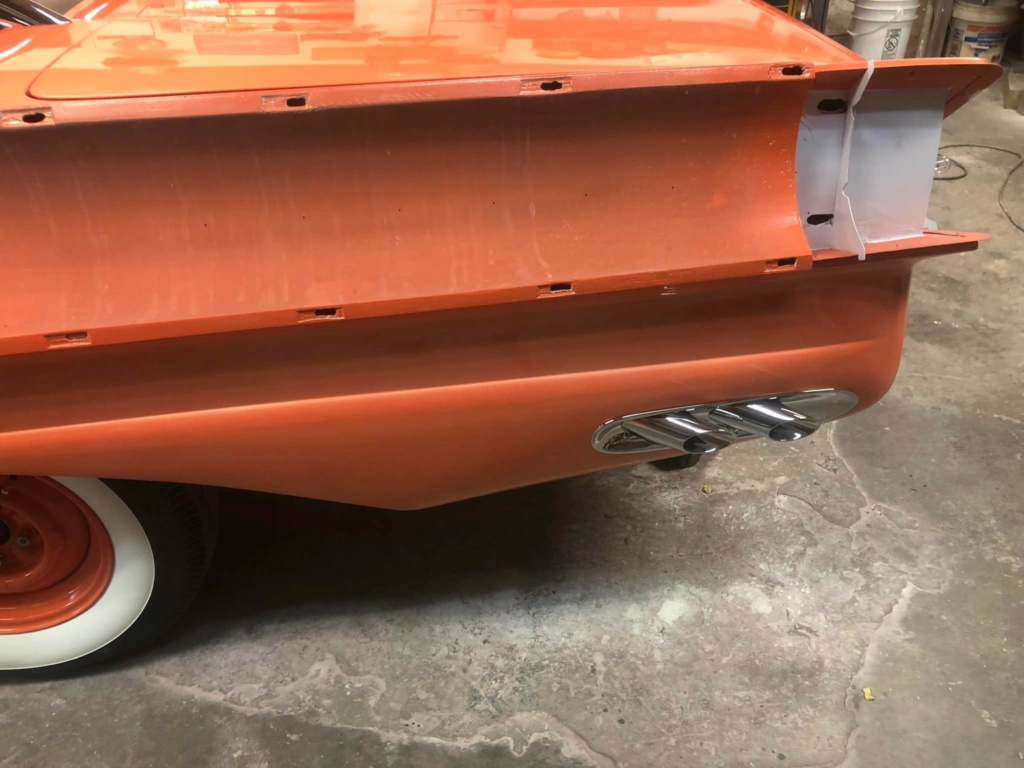 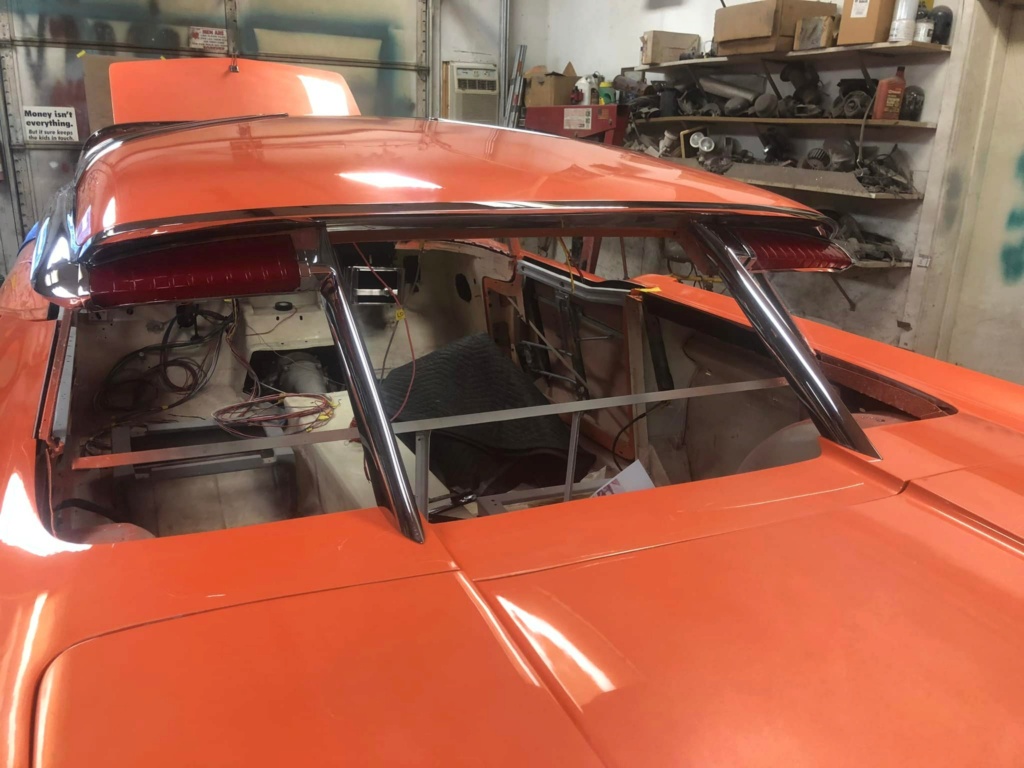 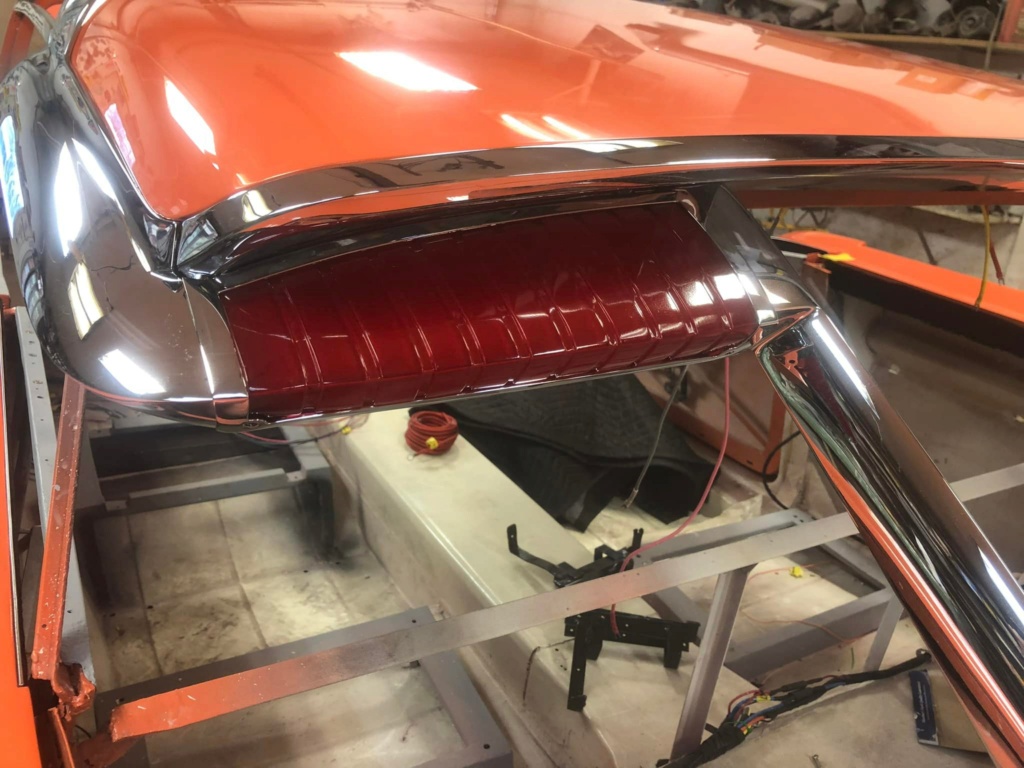 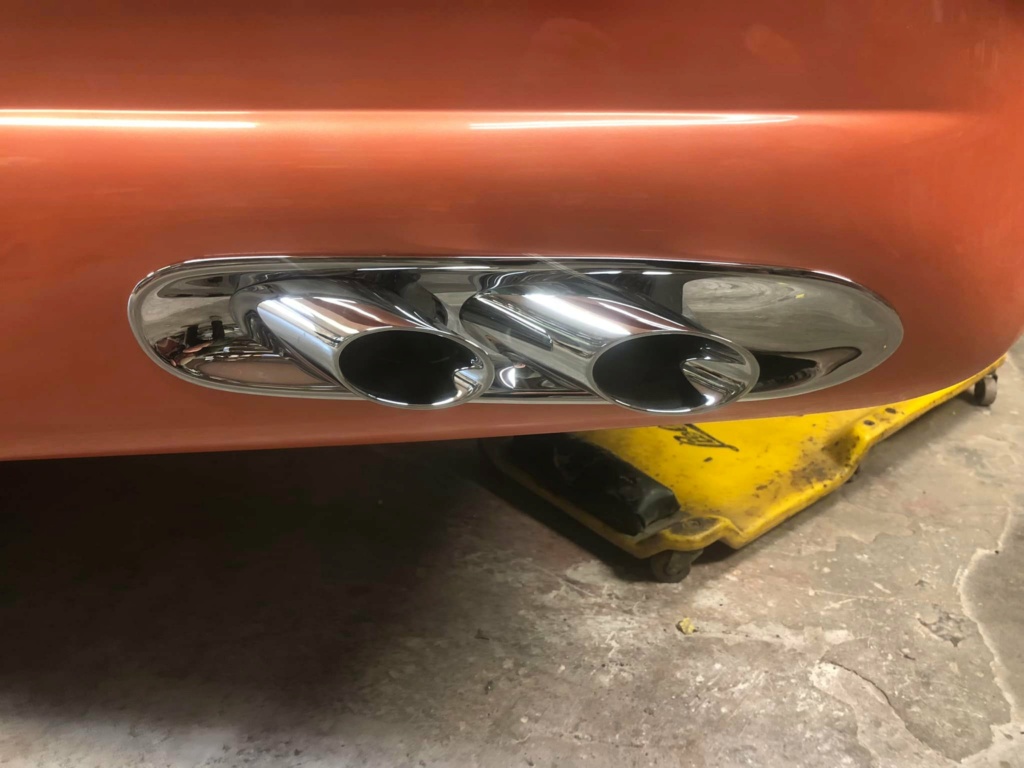