Ever wonder what happened to all those monochromatic customs from the '80s? You know the ones-all one color with pastel graphics, side pipes, body-color bumpers, and steel modular wheels. There was nothing wrong with them per se, it's just they were of their time. However, some of 'em resurface as traditional customs thanks to the vision and talent of new owners. Steve Lucas' '56 Mercury Montclair is one such resurrection. 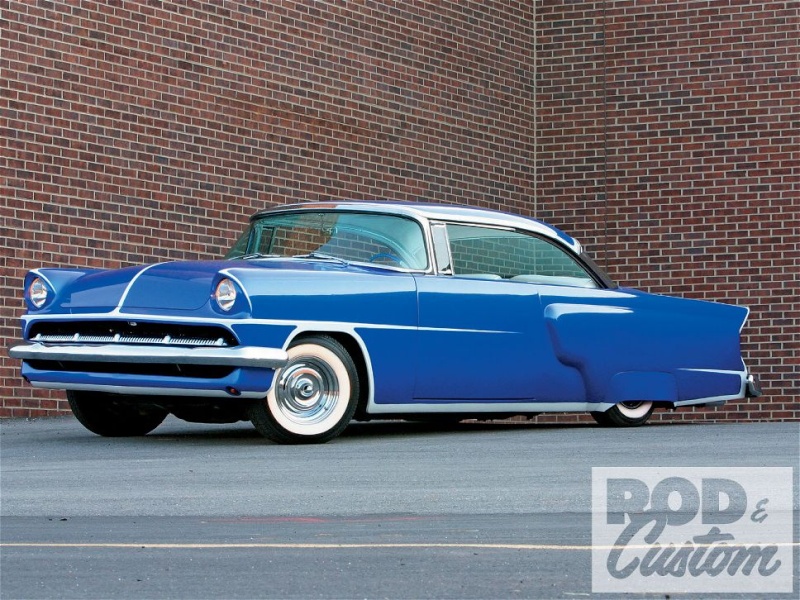 "The Merc was originally built in 1988 by Mike Thompson and John Childers at C&W Auto Body in Brookville, Ohio. It started as a rust-free example owned by a lady who moved back to Ohio from Los Angeles; the car was eventually sold by her estate in Erie, Pennsylvania. Every single nut, bolt, screw, and all the metal on the car was like brand new." Steve discovered all these details after tracking down the guys who first built the Merc. Apparently the car drove as though it was brand new too, and while most people wouldn't do anything to modify such a well-preserved car, as Steve says, "Most people are not custom car lovers! 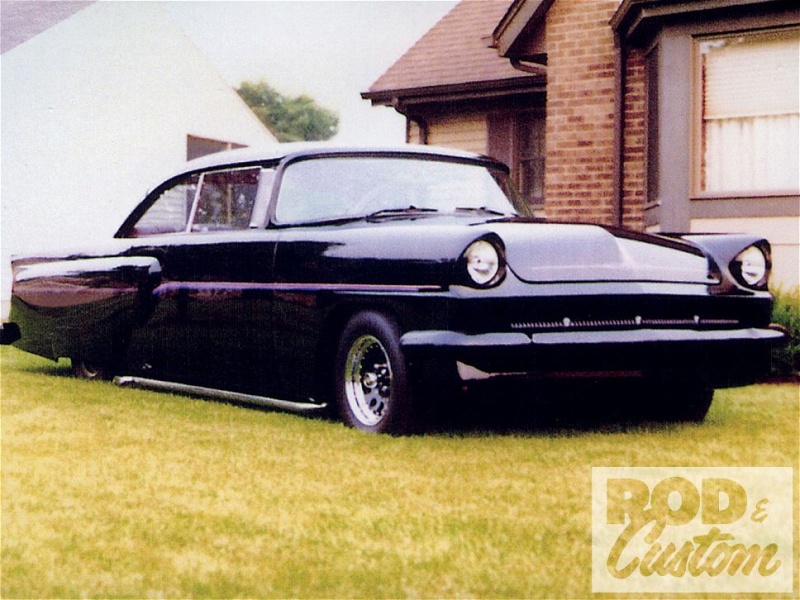 "Once rebuilt, with no chrome or stainless, the Merc debuted at the James Dean Rebel Run in 1989 and went on to be shown on the ISCA circuit, where it took First Place in the Full/Radical Custom class, along with other awards," Steve says. "It was then sold in September 1990 to Scott Moorehouse, a friend who continued to show it at the ISCA competition in 1991, again taking First Place in many classes. It won Coolest Custom at the old Medina, Ohio, Goodguys event in 1992 and KKOA awards in 1993. In 1997, Moorehouse sold it to a guy in a neighboring city and it dropped out of sight. Five years later the owner contacted him saying he wanted to sell it. Moorehouse called me as he knew I was looking for a custom, though the engine, suspension, and body were showing signs of wear. With the help of friends I renewed the motor and suspension and drove the car to the Goodguys Columbus event in 2002. I wanted to resell it as I also had a '40 Merc and '65 Galaxie convertible, but my wife and two sons loved the long, low look and begged that we give the car a makeover. The family voted and I lost 3-1! I sold the '40 and set the money aside for the '56. I could only think of one shop that could bring the car back to life; Jerry's House of Kolor in Elyria, Ohio. Jerry Koenigsmark has been turning out award-winning rods and customs since 1957. His son, Joe, now handles the shop duties under his dad's watchful eye, and is one of the few local guys who takes time to go out west and study paint and bodywork trends. His annual vacation is to the West Coast Kustoms Cruisin' Nationals. This was a guy I wanted doing my car! 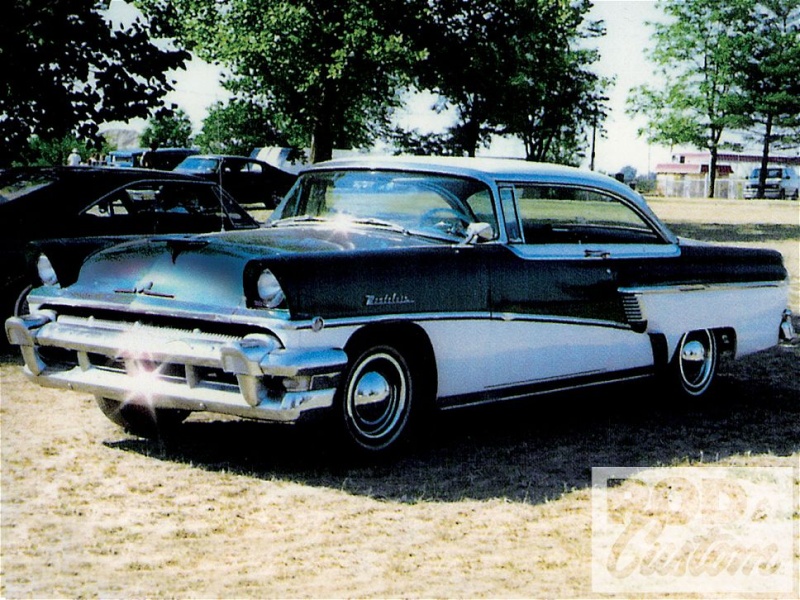 "I handed Joe the keys along with the artistic license to do what he saw fit. He took off all the metal trim and immediately sent it to Jason's Metal Polishing for removal of all the black paint, followed by fresh chrome, once repairs were made, as needed. The body was stripped and the few damaged spots repaired. We agreed on the paint color after much persuasion by Joe and the transformation began. I was hesitant on the scallops but after seeing them in tape on the car I trusted Joe's artistic eye-which I'm glad I did! 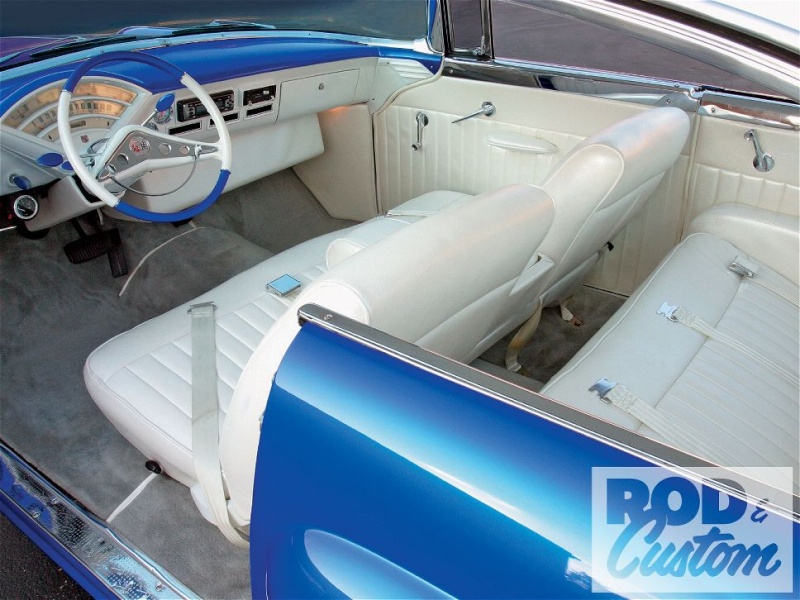 "Though I drive the car proudly I give much credit to Joe and my two boys. Their persuasion has given me a car that is unlike any other, and that is what I love about customs. They're like fine art for car guys. I am sure the little old lady who once owned this car is smiling down. I was honored at the compliments the car received from George Barris at a recent show, who took many pictures of my sons and the Merc." 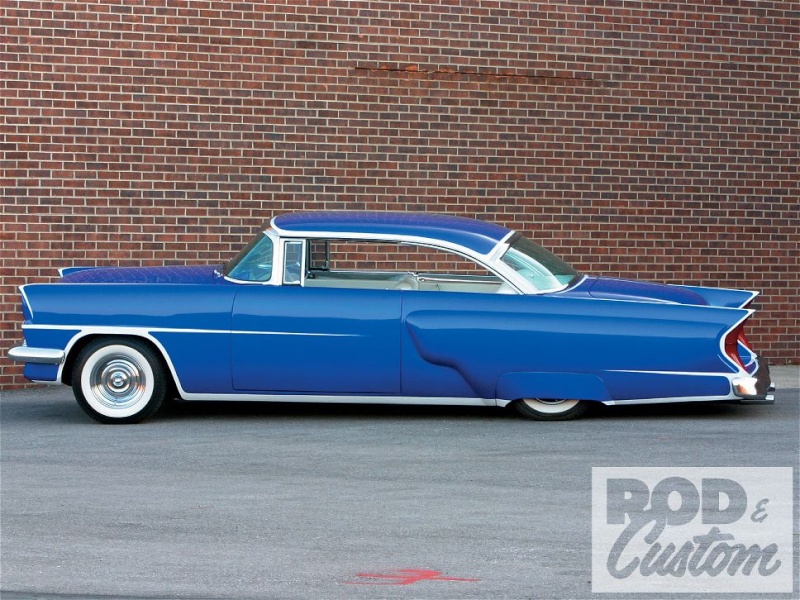 Chassis
Though the sheetmetal's all Mercury, its underpinnings are GM! The majority of the stock chassis remains, though Mike Thompson installed a '77 Nova front clip back in 1988 when the Merc was first built as a custom. This means the front suspension and steering, including the column, is stock Nova. The same Nova donated its rearend to the cause. Air shocks with an on-board compressor enable the rear of the car to be lowered, the work performed by Street Machinery in Euclid, OH.
_________________
We don't care the People Says , Rock 'n' roll is here to stay - Danny & the Juniors - 1958 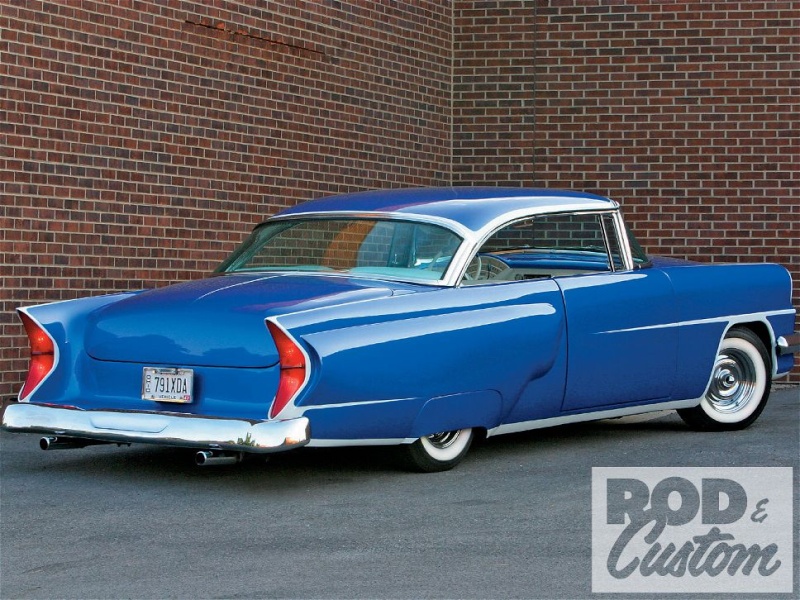 Drivetrain
Seems Mike Thompson had a good '77 Nova kicking around when he built the Merc, as the 350 small-block and matching TH350 trans also came from the Chevy. Both remain stock, with absolutely no modifications listed on Steve's tech sheet, though the motor has some dress-up parts! Hey, it's a custom, there's no need to open the hood! 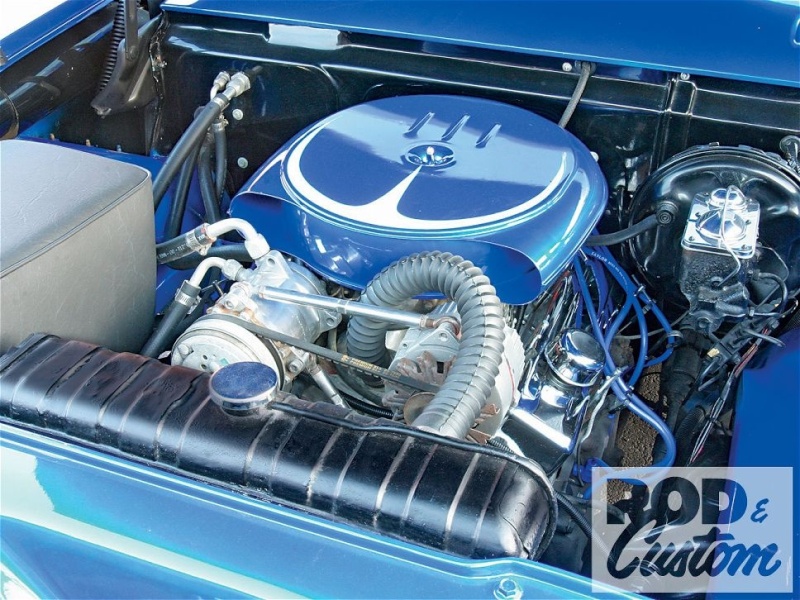 Body
The bodywork is where this Merc shines, as any self-respecting custom should. Most of the mods were tackled back in 1988 by John Childers, such as the pancaked hood, with frenched headlights that use '54 Merc rings under the peaks, 10-inch extended rear fenders housing quad '56 Packard taillights, and the removal of all trim and handles. The grille had its ends removed, and coupled with the removal of the bumper guards and a rolled pan, clean up the front end perfectly. Both bumpers were filled and smoothed before being re-chromed, while Jerry's House of Kolor in Elyria, OH, laid on the Hok True Blue pearl after bringing the body back to perfect condition. Joe Koenigsmark added the scallops.

Wheels & Tires
It has 14-inch Coker chrome wheels with Shannon cone centers wrapped in wide whitewall radials all round, though the rears are almost totally hidden behind skirts.

Interior
That '77 Nova crops up again as it gave up its front seat, while the rear is the stock Merc item. Pearl white rolled and pleated vinyl covers the whole interior, stitched by North Coast Upholstery in Lorrain, OH. A '60 Chevy steering wheel now crowns the Nova column. Airtique supplied the A/C, while a Ron Francis harness keeps everything running as it should, including the Pioneer stereo. Speedway Motors supplied the seatbelts, important with two young sons to consider.