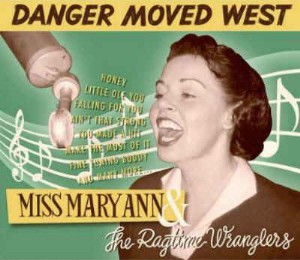 - MISS MARY ANN & THE RAGTIME WRANGLERS - DANGER MOVED WEST - (CD/LP)
SONICRENDEZVOUS
Heres the long-awaited new release of Miss Mary Ann & the Ragtime Wranglers "Danger Moved West". It contains 16 songs: catchy ones written by Miss Mary Ann herself, some by Californians Carl Sonny Leyland and Dave Stuckey plus some covers like the title track. Style of the album: rockabilly / rock and roll.The recordings have been made with vintage equipement while playing live in the studio. The band managed to catch a much stronger live feel onto tape then on their earlier albums. Easy for the band this time, because all of the studio sessions took place in between tours through Europe and concerts in the USA and Russia.This time Miss Mary Ann decided to write and record more danceable songs, like "Little Ole You", "You Made a Hit" and "Do You Wanna Rock"; songs that are just asking to be picked-up by the djs. These are alternated with some mid-tempo songs in which Mary Anns stunning voice stands out even more; just listen to "Strange Things" or "Make the Most of It".Guest musicians on the album are New Ranch Girl "Pepper", singing superb harmony vocals at 2 tracks, plus "Boogie Woogie Hall of Famer" Carl Sonny Leyland at the piano on his own song "Honey" and one extra. Both guests already shared stage with the band at various festivals; they fit in just perfectly.