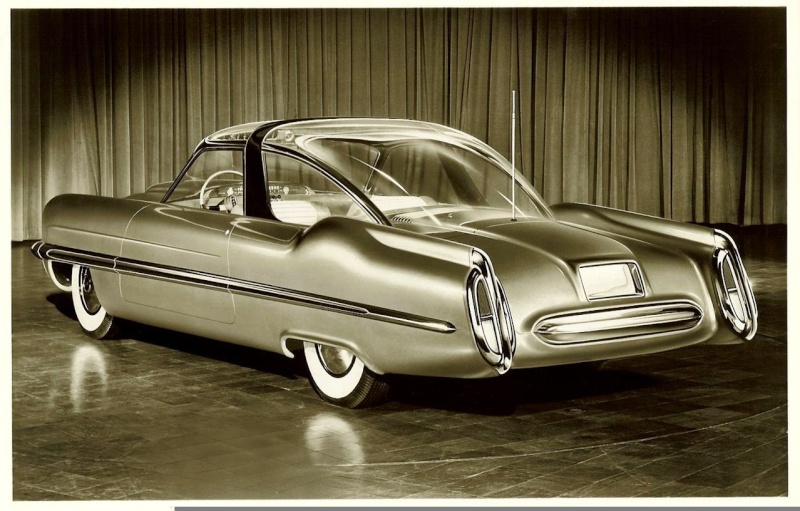 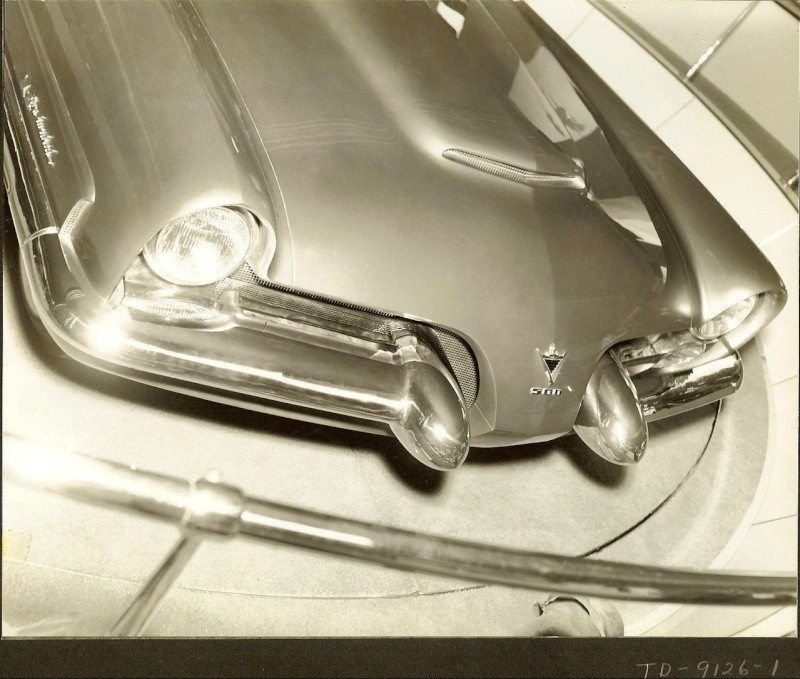 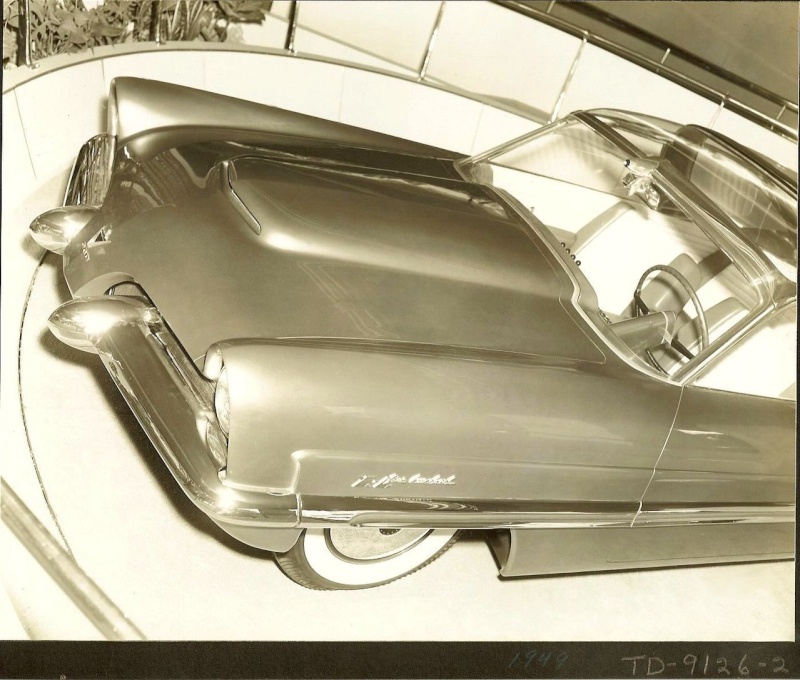 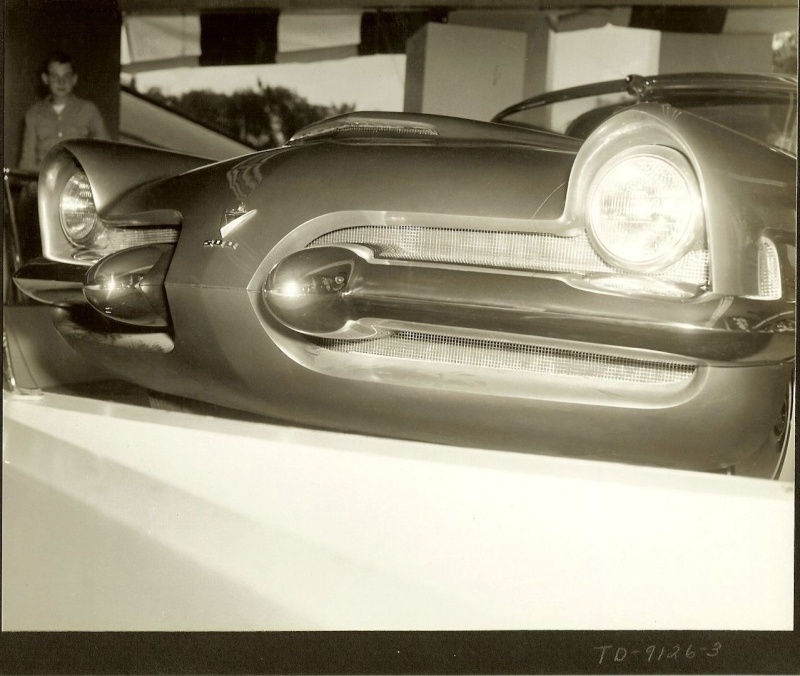 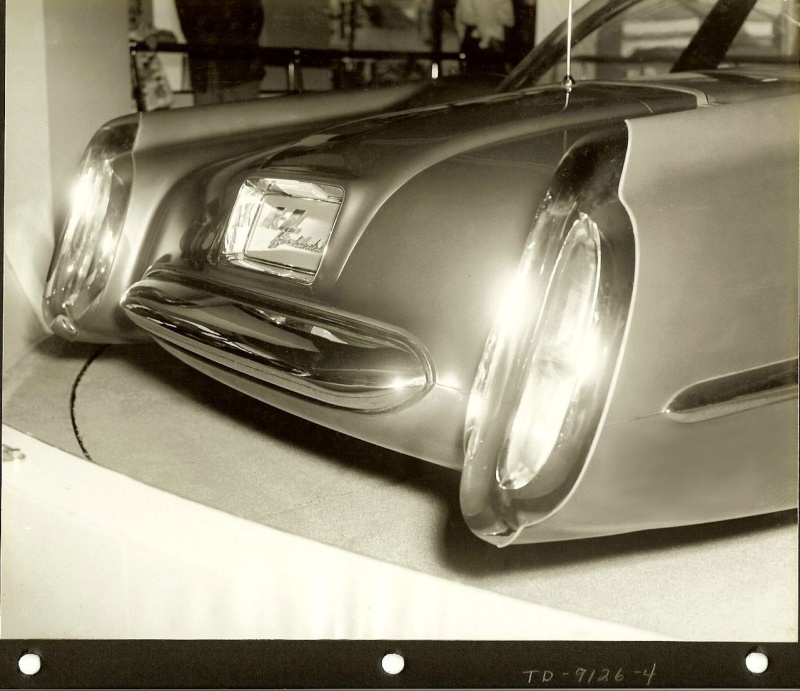 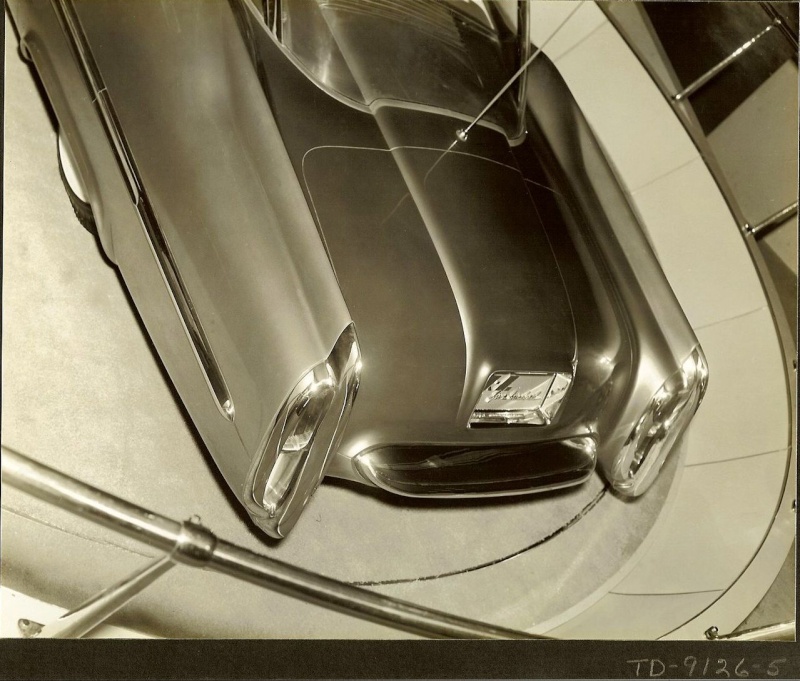 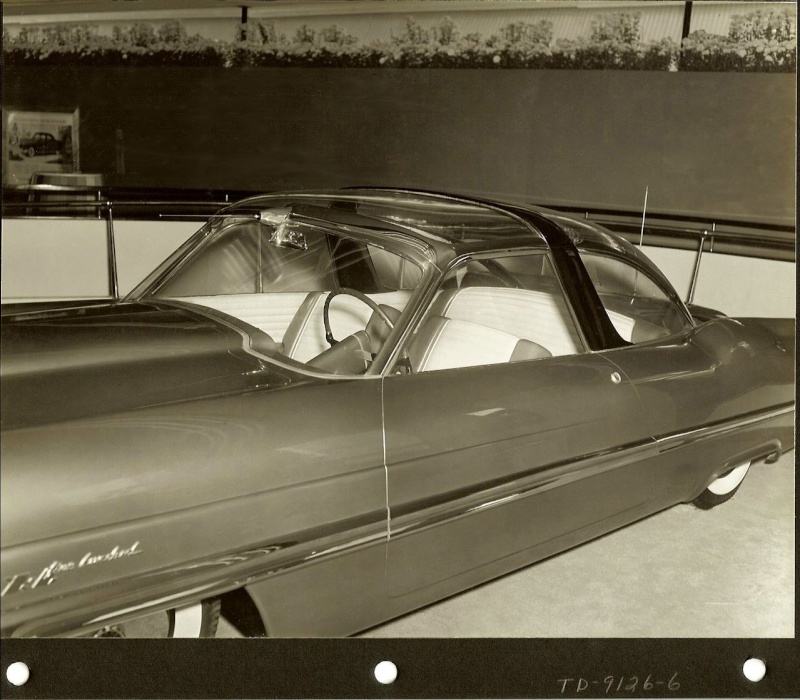 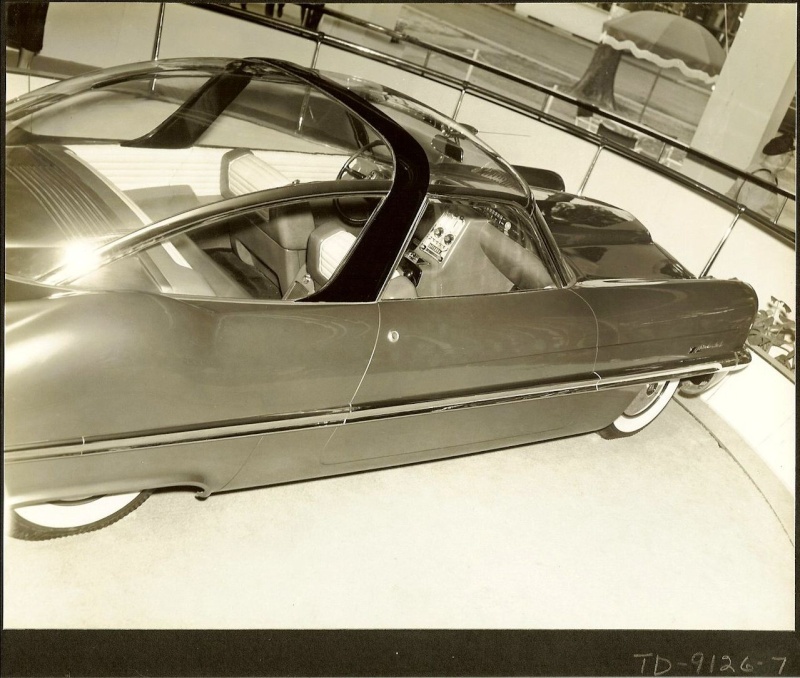 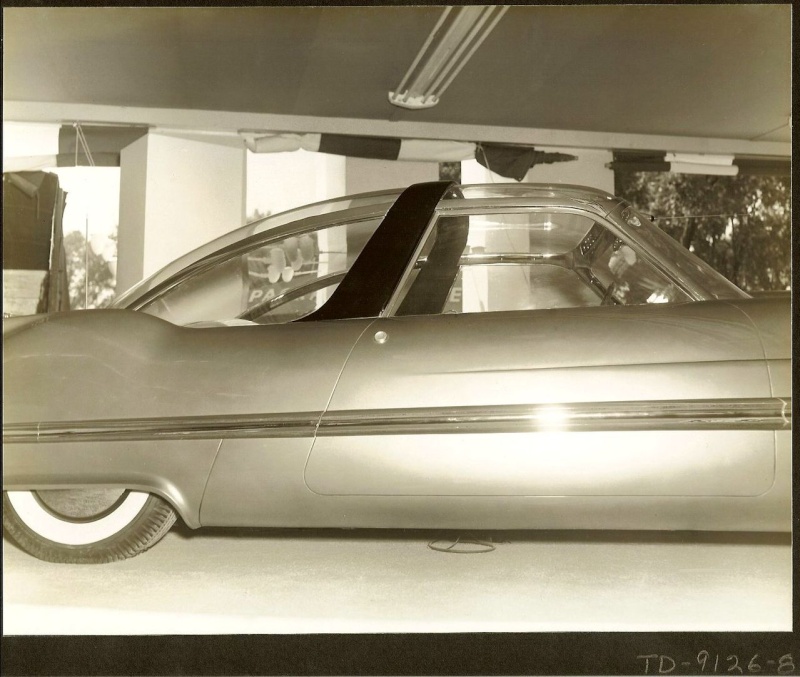 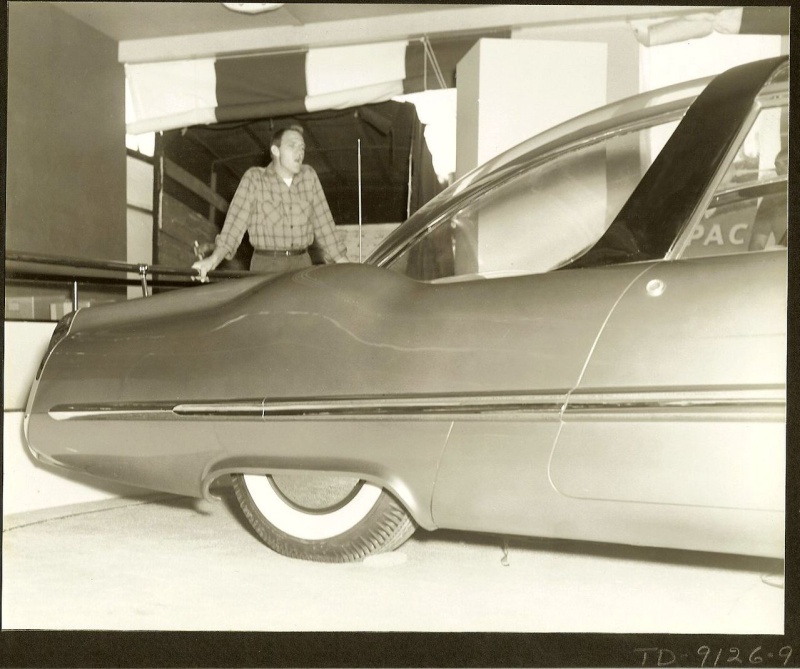 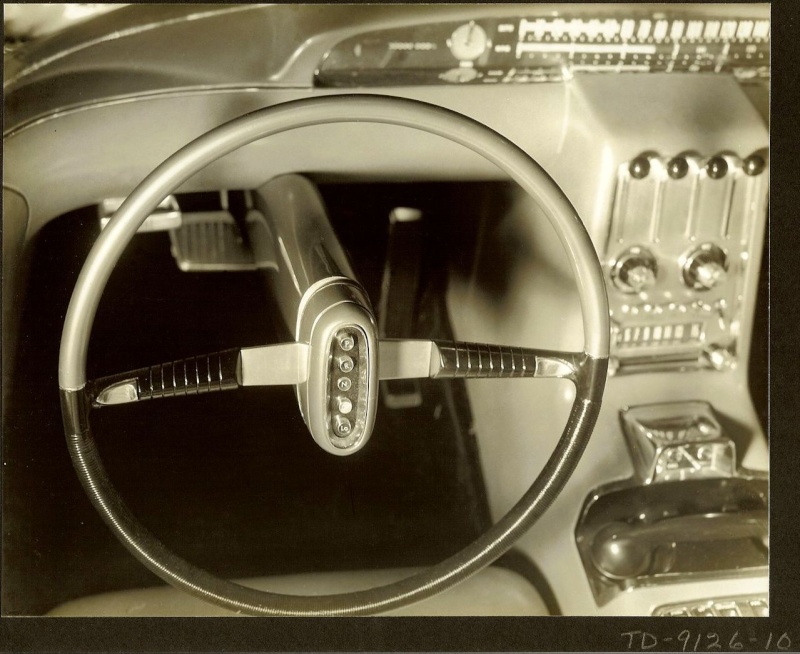 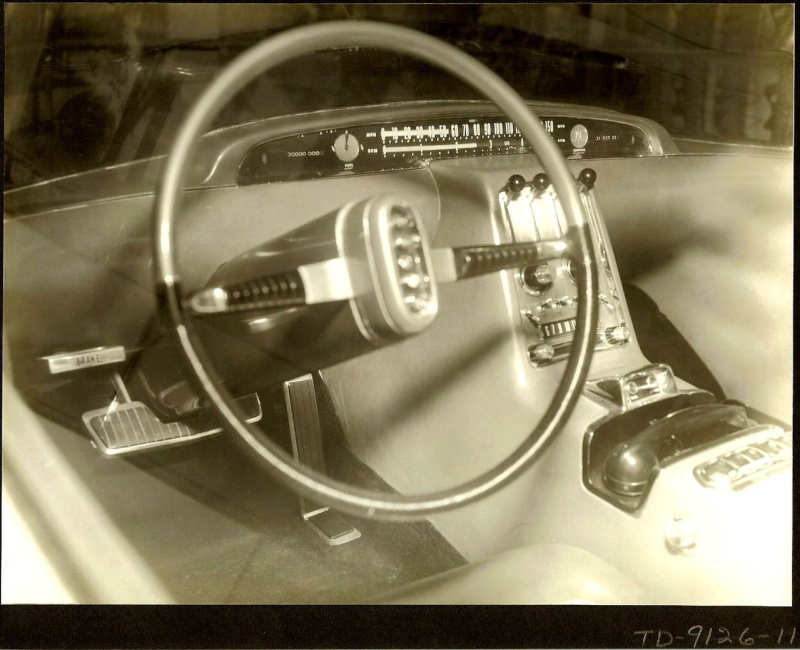 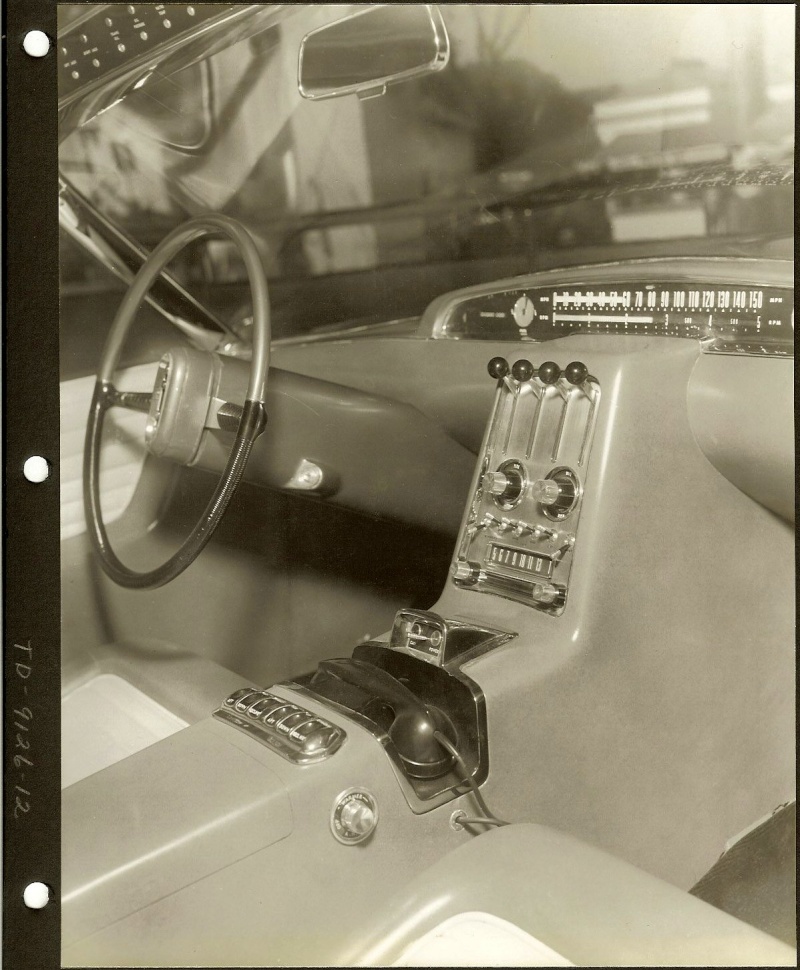 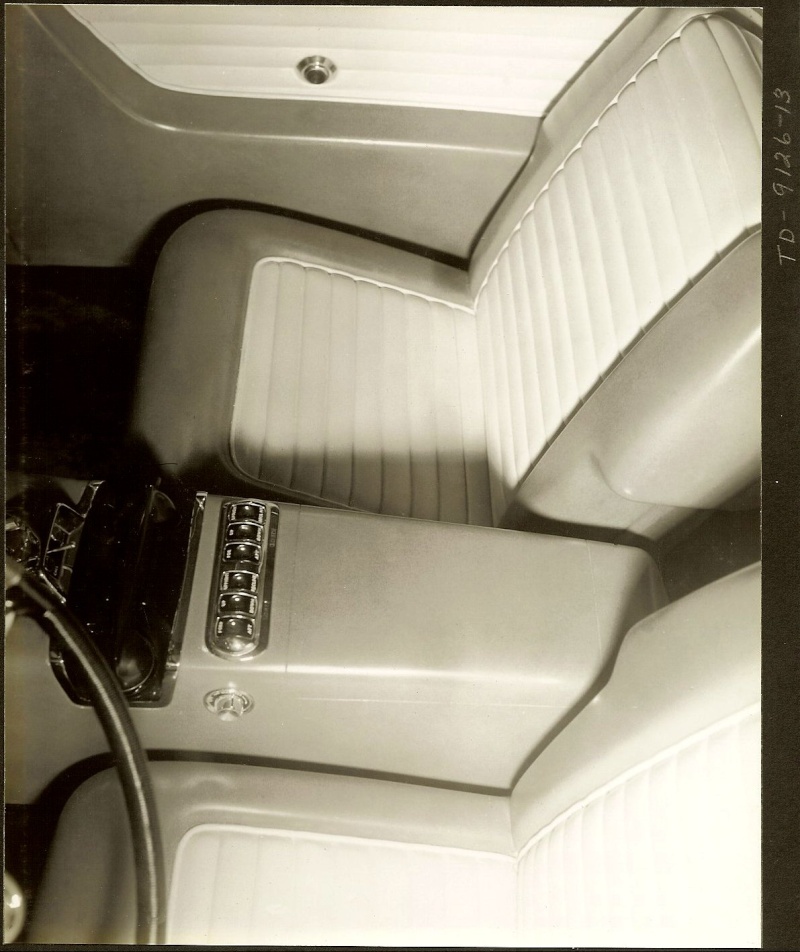 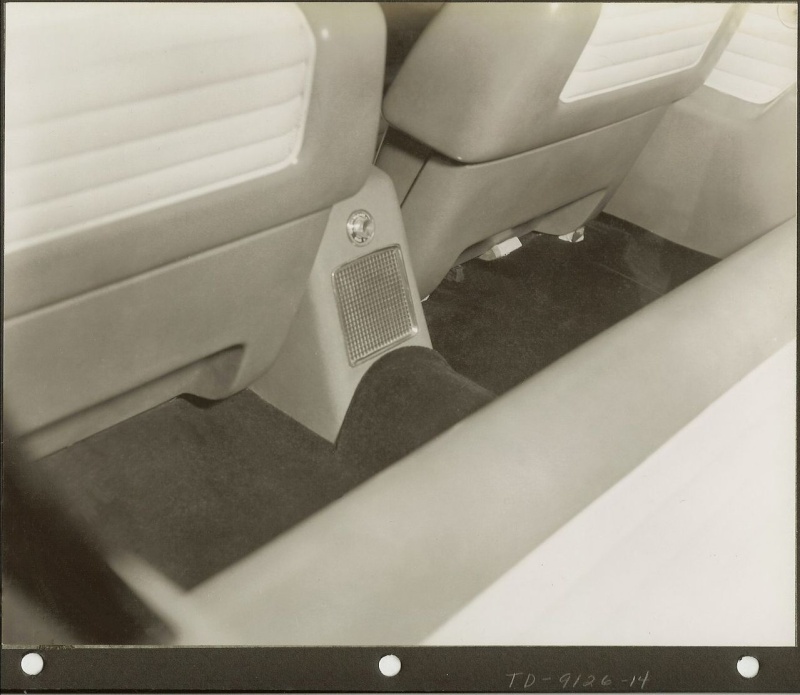 The Lincoln XL-500 dream car was first shown at the Chicago Auto Show. It was built on a stock '53 Lincoln chassis with standard engine and transmission. One of the cars distinctive features was the use of pushbuttons selectors for the automatic transmission. They were mounted on the steering wheel hub; this feature became a reality in the 1958 Edsel. 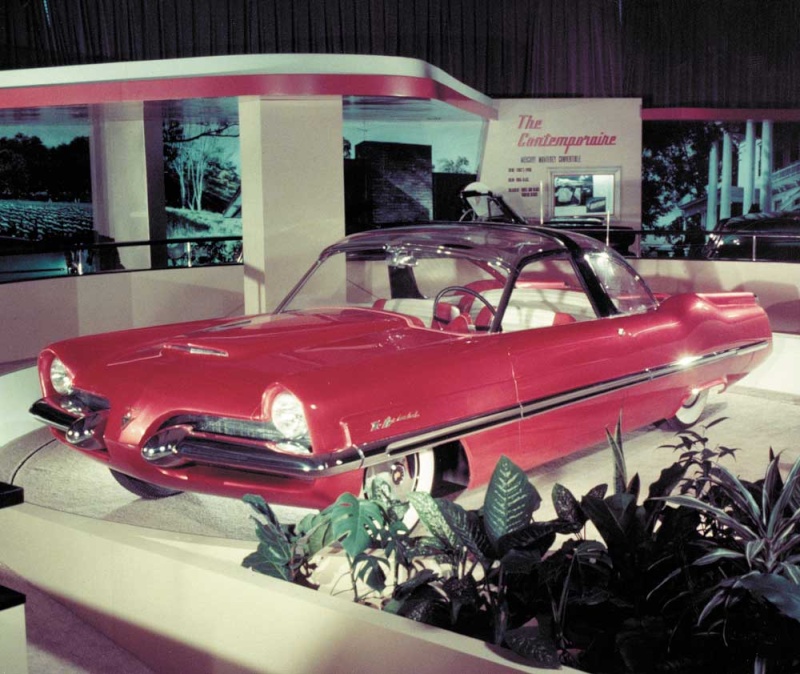 Speaking of fiberglass bodies, if you look back in old issues of Popular Mechanics and Popular Science, you'll find lots of stories predicting the future. These stories always made reference to cars like the XL-500 with their 'miracle' fiberglass bodies. Even though polyester/fiberglass mixes were far more costly than steel, not only on a cost per pound basis but on a cost per unit strength basis, the press and the public fantasized that miracle fiberglass plastic was the wave of the future. The automotive manufacturers just smiled and kept their mouths shut. 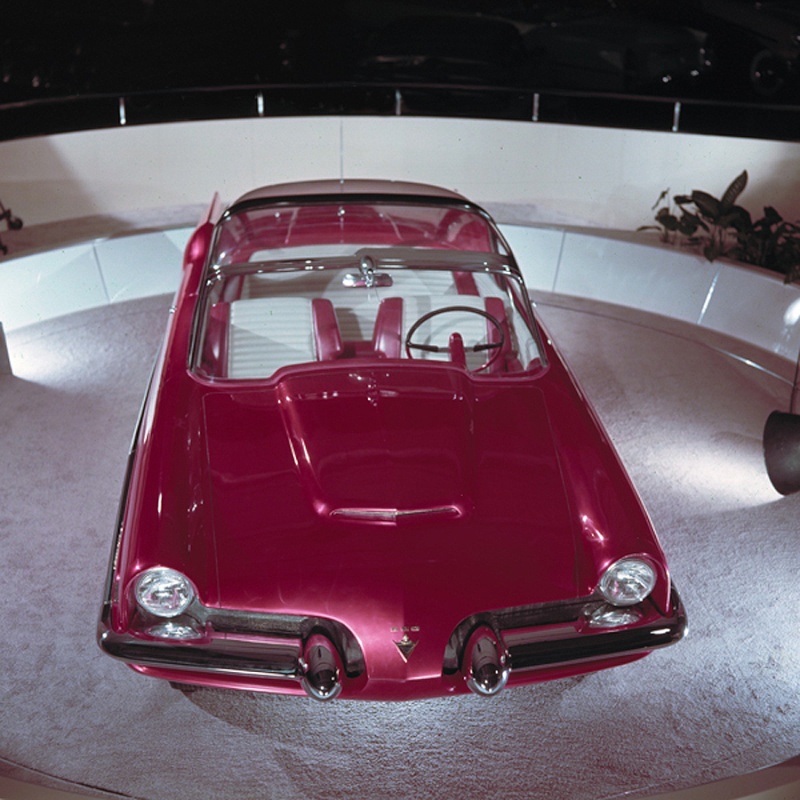 Same thing with Plexiglas. Never mind that Plexiglas acrylic was far more expensive than glass, that it scratched very easily and that the forming process for making those domed roofs would thin out the material at the top - the very spot where strength and rigidity was most needed. Sitting in a parked car in the California sun, a Plexiglas canopy would have you fry and die of heat stroke in about ... oh ... four minutes or so. None of this stopped the press from predicting that all cars would soon have transparent Plexiglas bubble roofs for all-around driver visibility.

We were also told that we'd soon live in domed cities with climate control and our second car would be a small commuter helicopter. With a bubble windshield/canopy, of course. Our homes would have central courtyards covered with a transparent plastic hemisphere to keep the weather out, help the plants grow and allow our robot servants to recharge their solar batteries. Clear plastic bubbles would permeate our lives. We'd be part of a bubble nation living an a bubble-based economy.

The Doming of America reached its peak with the introduction of the Cone of Silence on 'Get Smart' in 1965. The bubble economy collapsed shortly thereafter.

Returning to the bubblicious 1953 XL-500, the car featured a radio telephone, an electronic calendar and a power-operated hood and decklid. The showcar was painted a bright scarlet red and had a red and white leather interior. At first, the car was presented by the Lincoln Mercury Division with no Lincoln badges but it was later publicized as a Lincoln. With its striking exterior color and futuristic styling, the car brought foot traffic to the Lincoln Mercury stand at various auto shows and probably helped sell a few Capris and Montereys.

Well, it's now almost fifty-five years later and we continue to be bubbleless. We still don't have anything on the road like the XL-500. No vehicles with clear bubble canopy roofs. No bubble-cockpit personal helicopters for commuting. No domed, climate controlled cities either. No plastic hemispheres over courtyards where robotic slaves could gather. 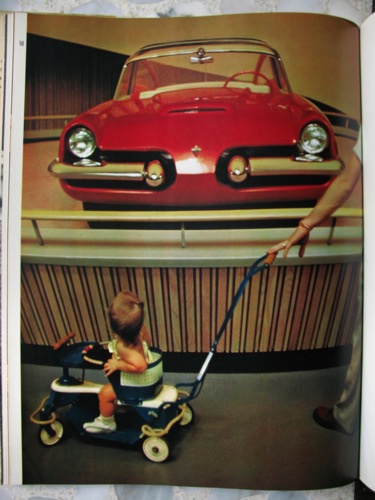 But that 'radio telephone' thing did come to pass; they now call it 'cellular' and, every day, you can see it in use on the road - by contractors who are hogging the passing lane in their trucks while they concentrate on barking orders to employees and by salesman who are weaving all over the road while trying to set up their next appointment while simultaneously entering notes in their PDAs. 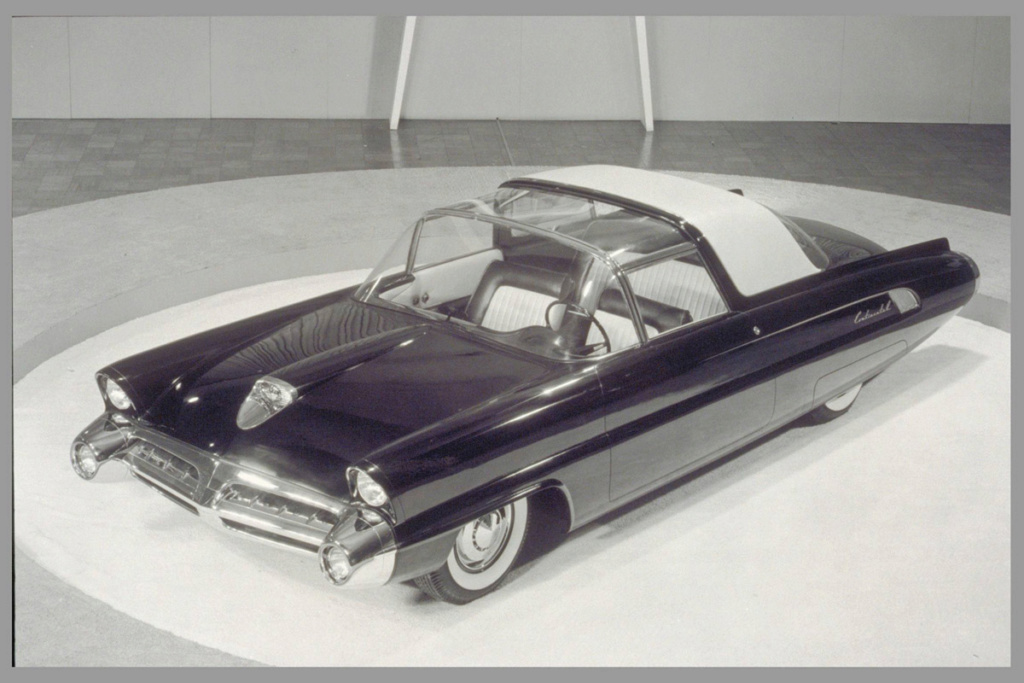 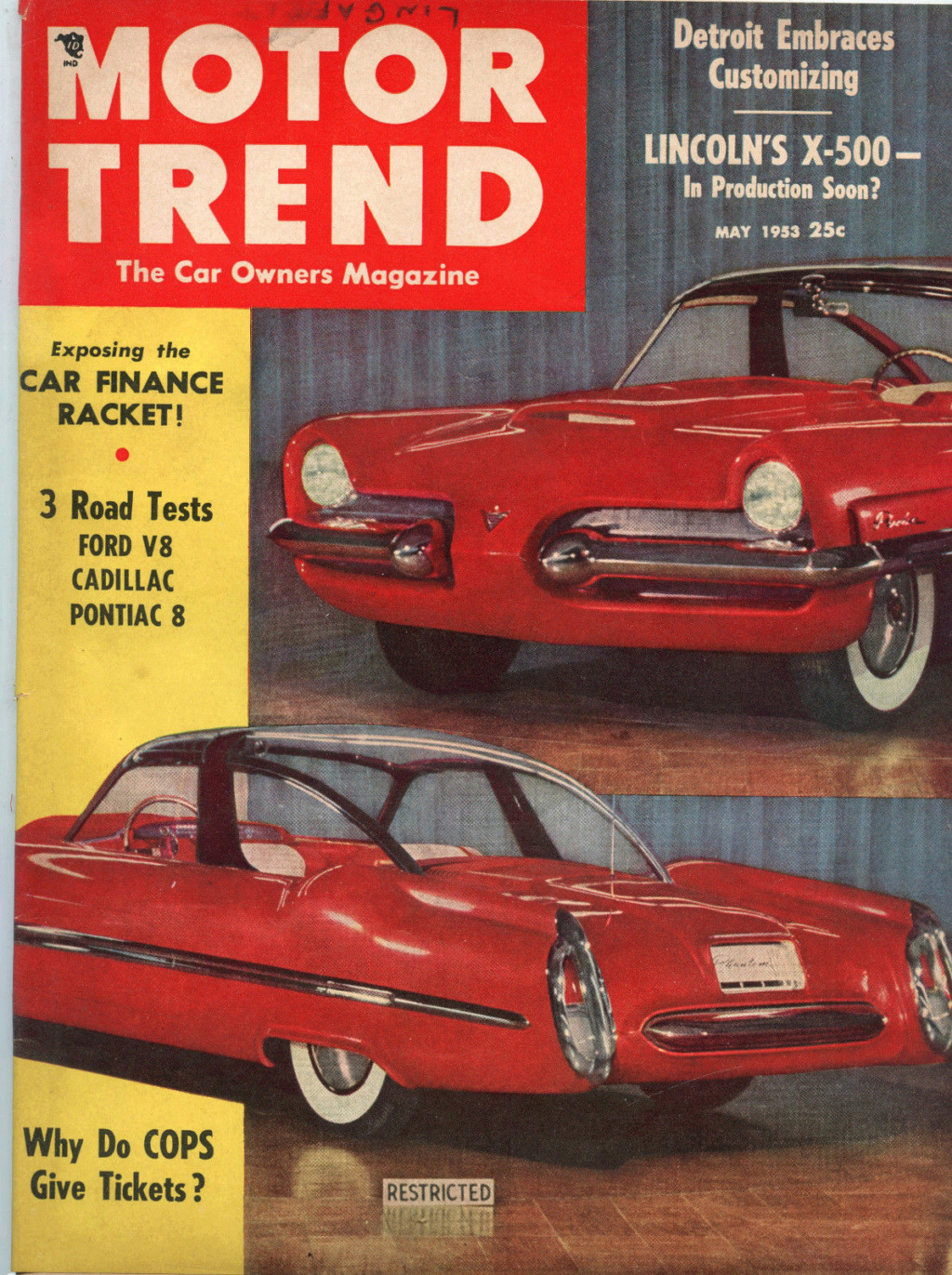