I took a break from building bikes and the scene for four years. I guess I needed a break for various reasons (my job, no time, sick of billet fat-tire choppers), so I took a much-needed extended vacation from the two-wheeled scene. 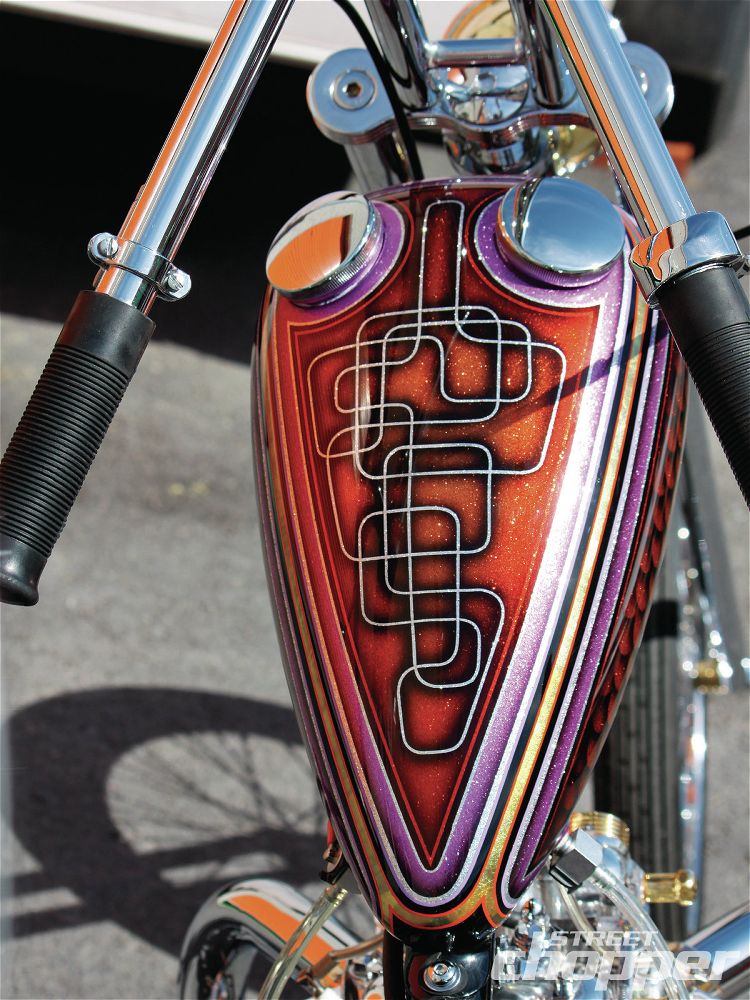 Then, I met my colleague, Richie, and we both shared the same passion. He got my hands dirty again and re-sparked my interest in choppers. So we decided to start up this company I had by the name of Bones Legacy again.


This bike was built in my garage until we found some nice shop space, with the final assembly taking place in our new shop. Thanks to Richie, as none of this would have ever happened with out him. 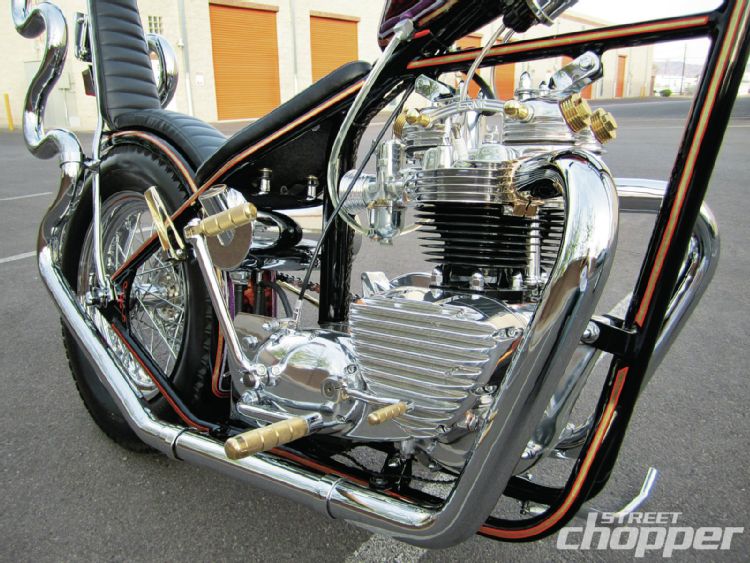 Designing the whole concept of this bike was to build an over-the-top radical, retro, early ’70s chopper, and to really go all out and have the best people in the industry help in creating the best possible bike as a group effort. I don’t think that only one person or just one shop can possibly achieve this. Something like this has to be a team effort. 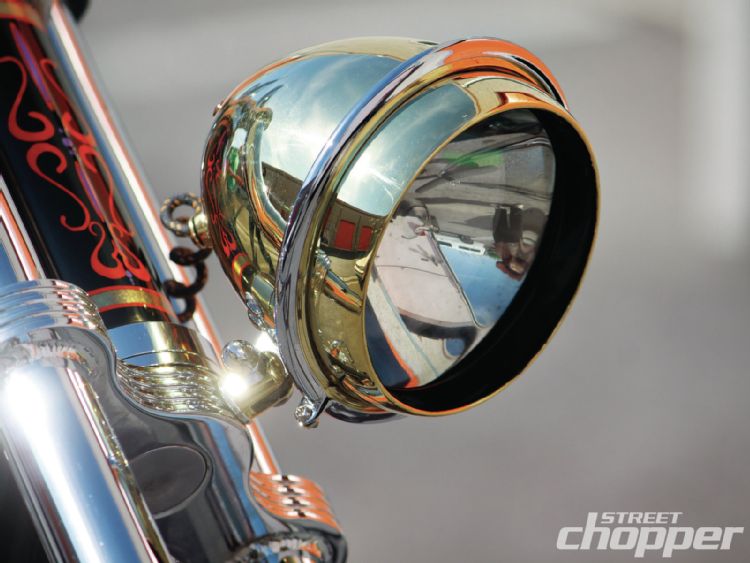 The frame and frontend was a one-off custom by Factory Metal Works. My idea was to do a rigid frontend since I have not seen one since back in the day. Last year I talked Lucas, the head honcho of Factory Metal Works, into doing this and he said I was crazy. I wanted to do 40 over, but after much deliberating between the two of us, we decided on 30 over. 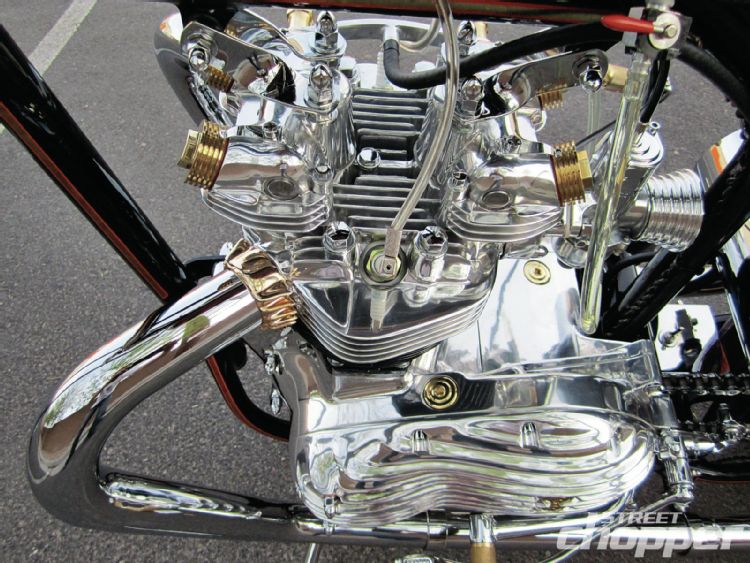 As far as the pipes went, I wanted to do something no one else had done before and to have them really stand out in a crowd of raked and flaked bikes. The pipes were kept a closely guarded secret until the very end of the build. 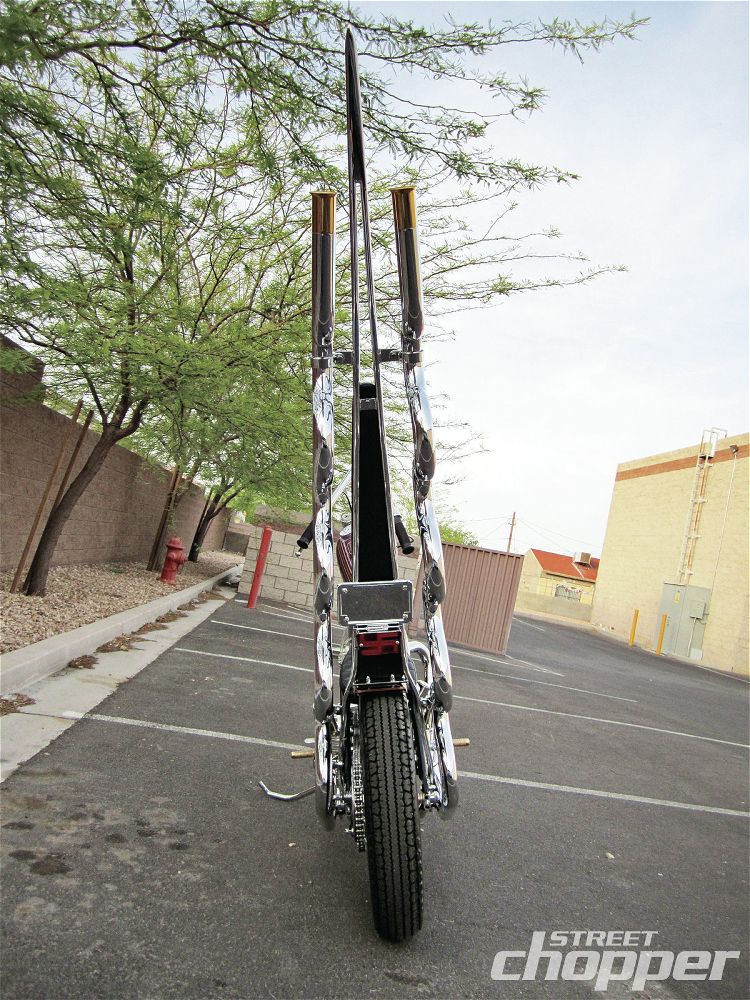 I have a hard time naming bikes, however I named this bike after one of my favorite bands; a black metal band from Norway dubbed Satyricon.


We contacted Blue Moon Kustoms for the paint and discussed the ideas we were looking for. Let’s just say they were picking up what I was putting down. 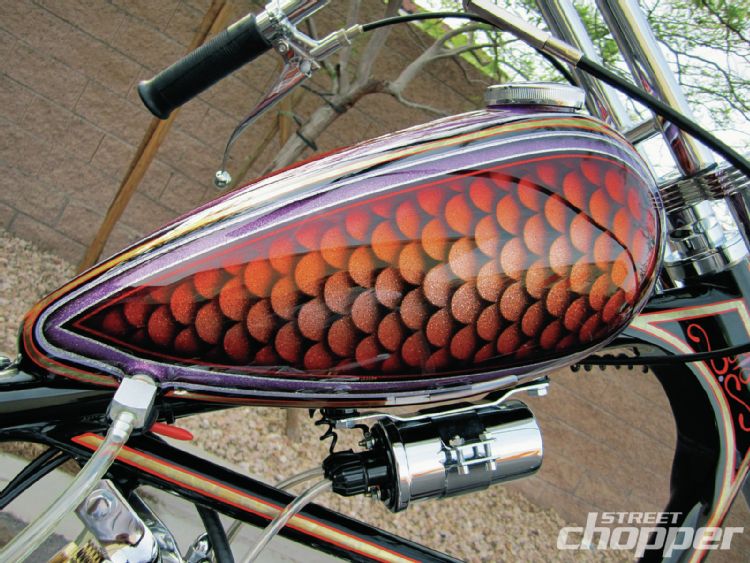 I can’t say enough about how perfect the motor came out, especially the head. Not to mention that the detailing of the inner fins is impeccable. Dan from Franz and Grubb put all his love into it and it really shows.


The first time I rode this machine was for this here photoshoot with no practice. To tell you the truth, it rides nice and is quite a blast from the past. Hitting a bump in the road for the first time was a new experience due to the fact that the frontend flexes instead of collapsing like conventional frontend. 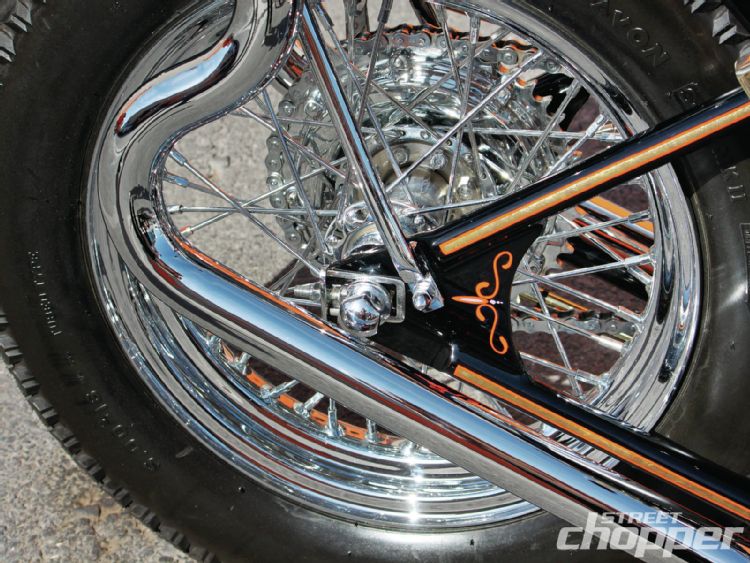 I am very happy with the outcome of the bike and it was worth everything we put into it. With that in mind, the hard work really paid off, which is good since the bike will be used to showcase what Bones Legacy is all about. We’ll see ya out there. STC 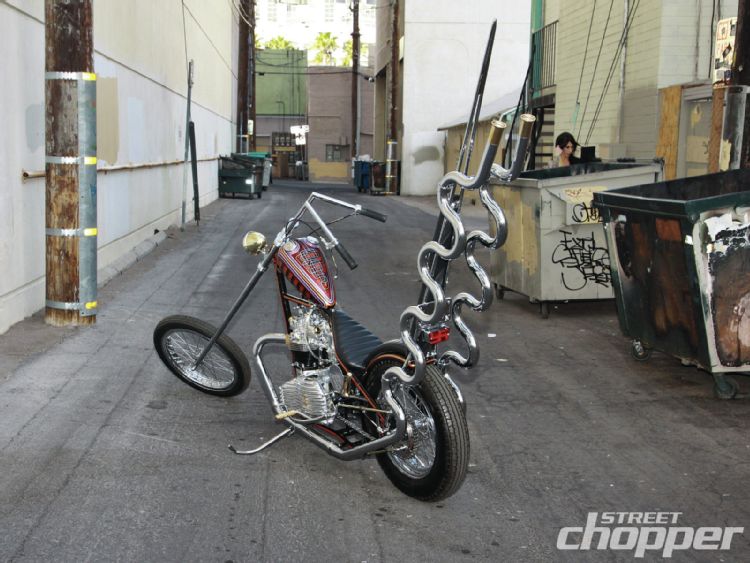 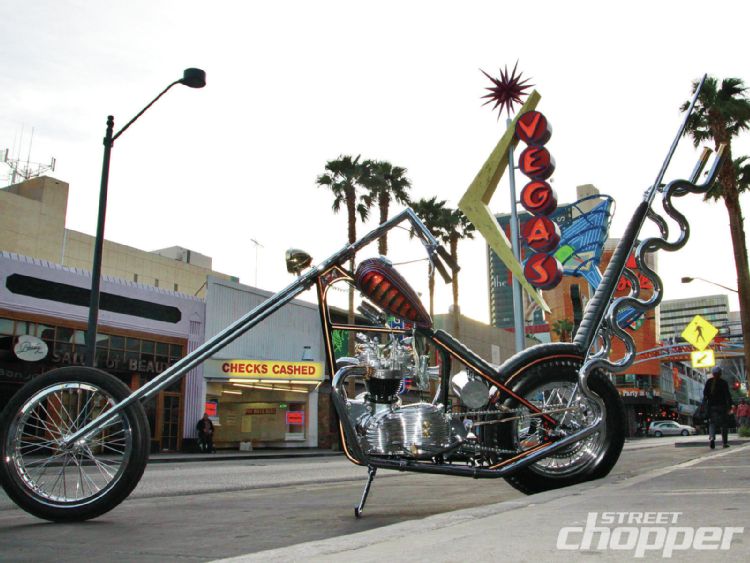 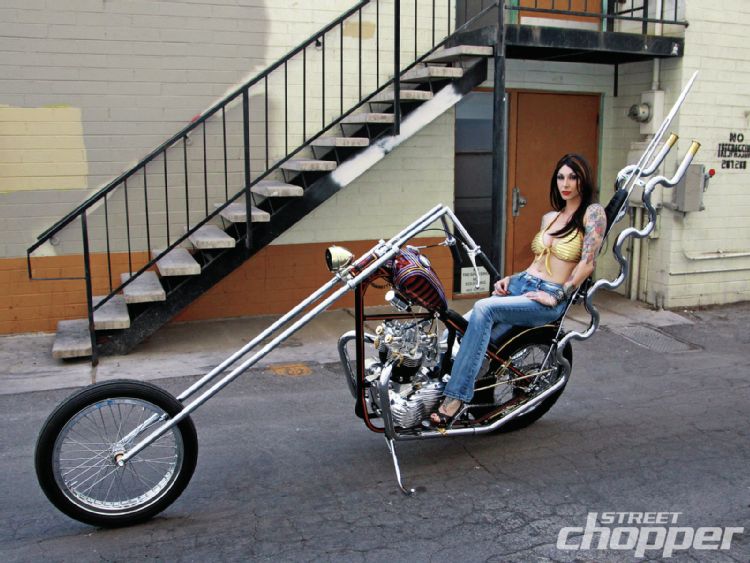 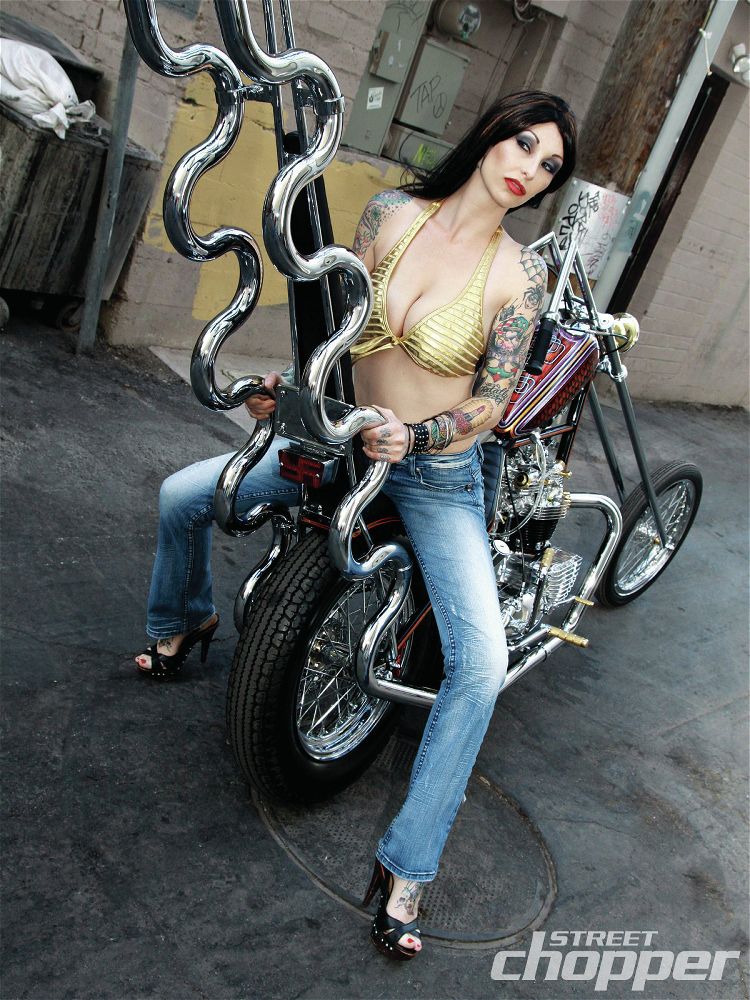