Low and Slow: The History of Lowriders

Low and Slow: The History of Lowriders

A Chevrolet lowrider on display at a show.

In Southern California in the 1950s and early '60s, young Chicanos created a car style called "lowrider" that expressed the pride and playfulness of Mexican American culture. 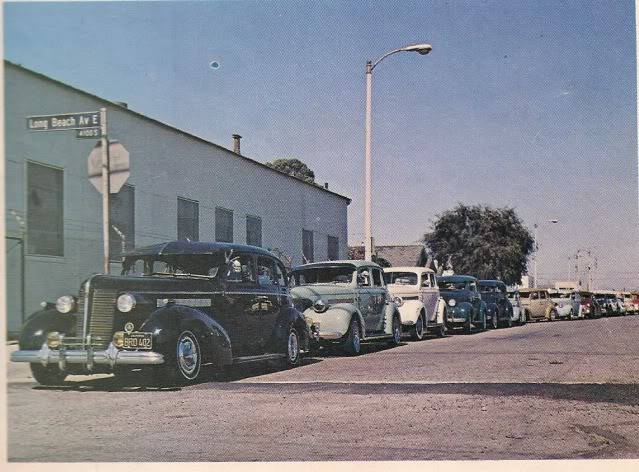 The peak of lowrider culture came in the 1970s on Whittier Boulevard in Los Angeles, a wide commercial street that cut through the barrio of the city. Gliding along Whittier on Saturday nights in the '70s were brightly-painted cars modified by young Mexican American men to ride low to the ground, fitted with special hydraulics to make them bounce up and down. These drivers had little interest in the rubber-burning speed of their hot-rodding peers. The guiding principle here was bajito y suavecito: low and slow. 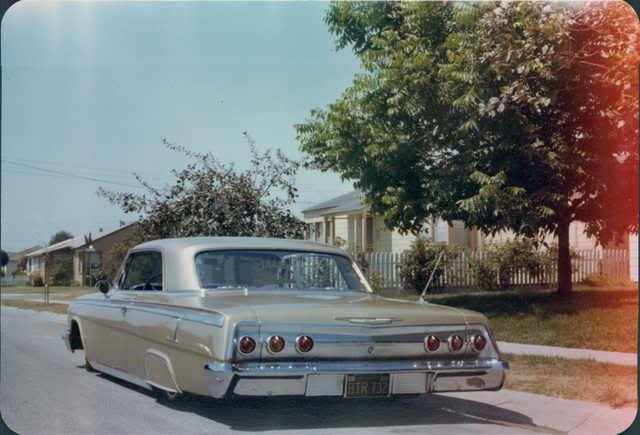 The Whittier "cruise" was a social event of large importance, an exciting arena where la raza (the people) could come together to have fun, where young men and women could check each other out, and where a proud political and historical consciousness could be articulated. 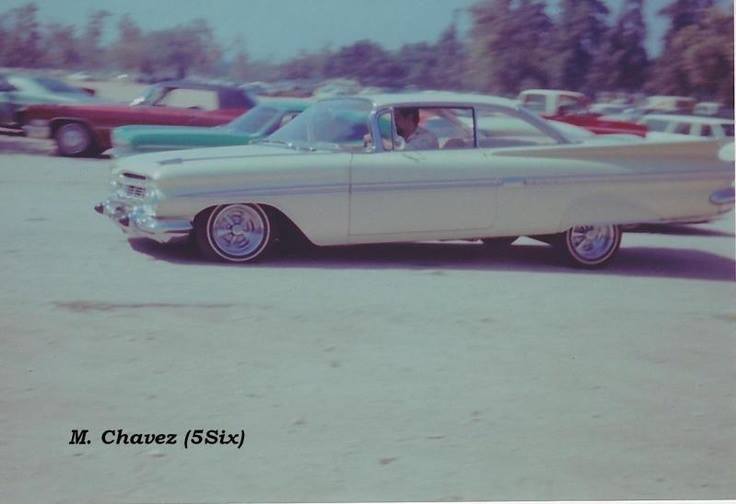 Lowriders, wrote journalist Ted West in 1976, "express the refusal of a young Chicano American to be Anglicized. There has never been a clearer case of the automobile being used as an ethnic statement." Lowriding continues today - under the radar compared to the '70s, but thriving. 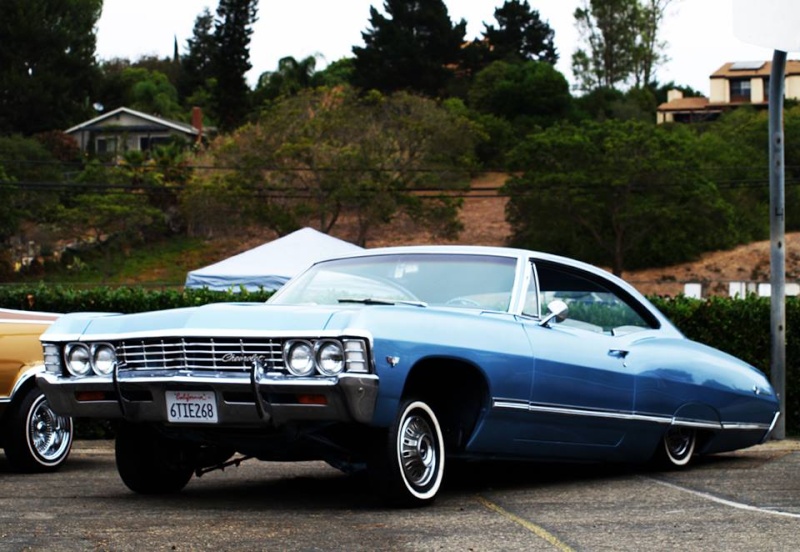 Opinions vary on what constitutes today’s lowriders, but many hobbyists would agree with anthropologist Ben Chappell that the style includes a lowered chassis, hydraulic suspension, custom wheels ("rims") often with spinners, narrow tires, engravings on the windows, multi-layer lacquer jobs, lush custom interiors with accessories such as chain-wheel steering and crushed velvet, and a streamlined exterior with multiple colors, designs, and/or murals.

The history of lowriders is complex. One aspect of the story begins in the 1920s when auto ownership skyrocketed in Southern California.

You needed a car to get anywhere in spread-out Los Angeles and environs; Henry Ford sold a lot of Model T's there starting in 1908; by the middle '20s, the region had a rate of auto ownership of one car for every 2.25 people, compared with a nationwide average of one for every seven. 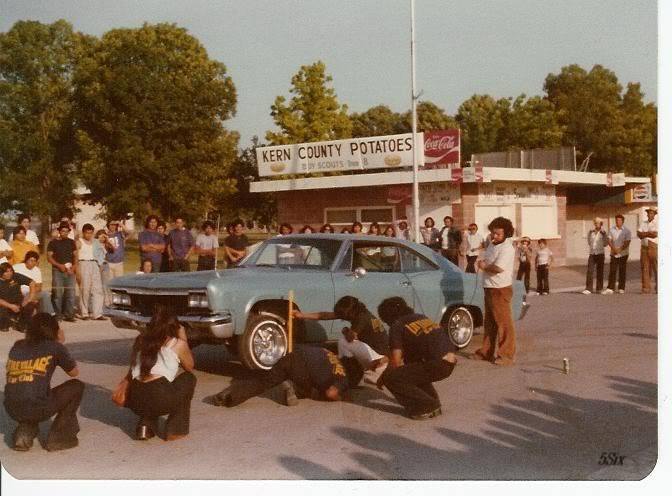 Used cars were available in L.A. in seemingly unlimited quantities for very little money. In the 1920s, young men from various ethnic groups bought used Model T's, along with Model A's and other vehicles, stripped off the fenders and other extraneous parts to lighten the weight, and modified the engines to get more speed. These were the world's first hot rods, called "hop ups" and "gow jobs" in those days. The guys would drive east to the Mojave Desert and race across dried-up lake beds. 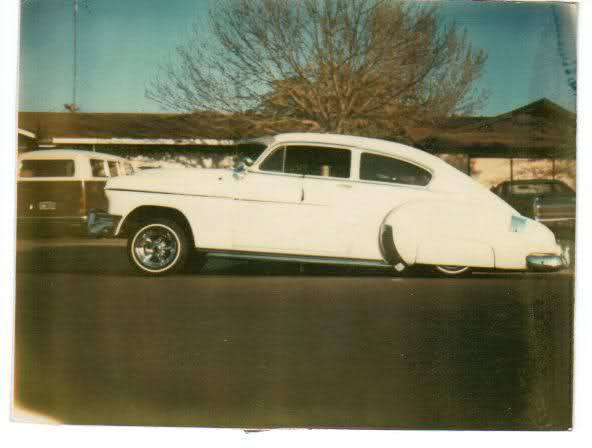 Hot-rodding was a robust presence in L.A. for years. By the 1940s some hot-rodders were becoming less interested in speed and more interested in streamlined style and comfort. They began building what became known as custom cars. They would take, say, a 1936 Ford, and lower the rear of its chassis with cutting torches, getting it as close to the pavement as the law allowed. They would bend and modify the frame. They'd cover the rear wheels with fender skirts. They’d round the corners and remove the name badges. The ’36 Ford, formerly boxy and boring, evolved into something low, long, wide, sleek, mysterious, and exciting. 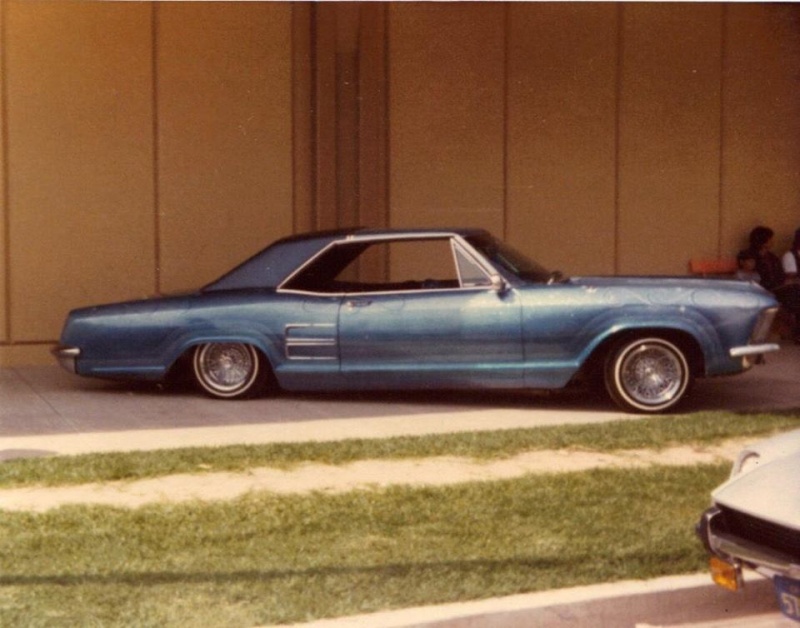 The custom car scene of the ‘40s was multicultural. So, for example, two Mexican American brothers, Gil and Al Ayala, operated a well-known custom body shop on Olympic Boulevard in East Los Angeles, swapping ideas with customers of all races.

The custom car hobby began to change in the late 1950s and early ’60s. Many riders, mainly whites, turned away from the low, sleek look, and moved toward flamboyance, bubble tops, a funky futuristic look, and speed. This trend was pushed to its extreme by Ed "Big Daddy" Roth and the Kustom Kulture movement. But in East Los Angeles, Chicanos didn't follow the new trend, sticking to the time-honored technique of lowering and streamlining older cars. And they added a remarkable innovation: hydraulics, a distinguishing feature of the modern lowrider. 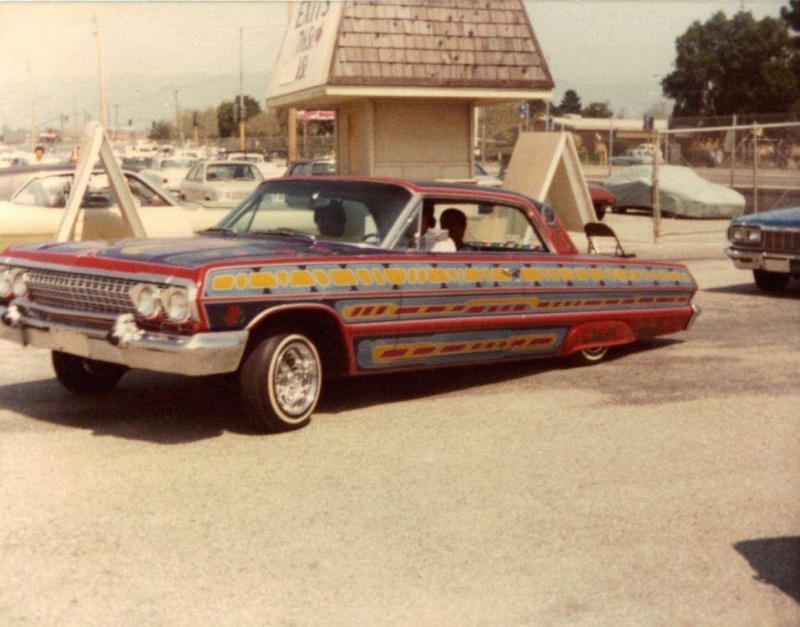 Lowrider hydraulics were originally aircraft hydraulic systems (pumps, dumps, cylinders). Young Chicanos attached this gear to the undercarriage of cars to create an adjustable suspension. Riders could flip a switch to raise a car’s body a few inches to glide safely over an obstacle and to pass a police inspection, and then flip the switch back, returning the car to its low, cool, pavement-scraping stance. This evolved into dramatic up-and-down bouncing, known as hopping. 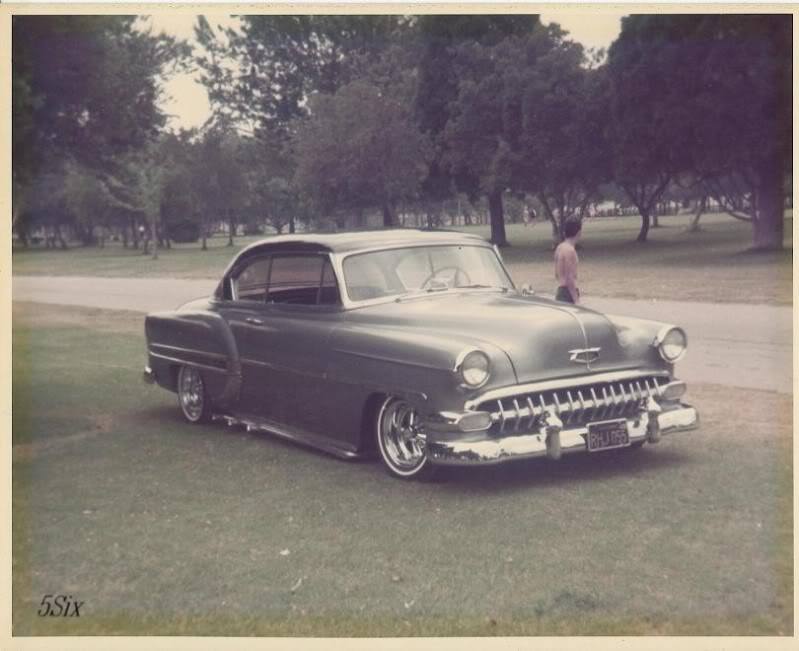 One car buff, quoted by author Paige R. Penland in "Lowrider: History, Pride, Culture," recalled his introduction to the technology: "These guys were telling me about cars with hydraulics that made them go up and down. I said, 'What in the world would anybody want their car to go up and down for? That’s the most ridiculous thing I ever heard of.' (Then one day there was a) Chevy going by. He hit the switch and the front end of the car went down. Boy, from then on, I was hooked. You just had to see it." 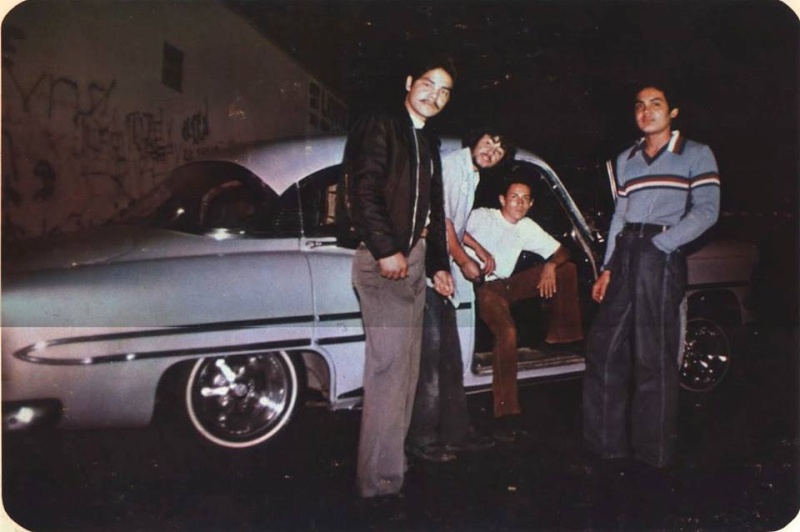 So, by the early 1960s, lowriders with hydraulics were a Chicano art form, distinctly separate from Ed Roth and the rest of the custom car scene. Lowriders with hydraulics were not only cool, they were playful - a good example of rasquachismo, described by scholar Tomas Ybarra-Frausto as a "bawdy, spunky" Chicano sensibility - "witty, irreverent, and impertinent" - that seeks to "subvert and turn ruling paradigms upside down," re-creating American icons, such as cars, with "oppositional meaning and function." Scholar Brenda Jo Bright puts it another way: hydraulics in lowriding represent "the politics of laughter."

Another chapter in the history of lowriders involves California demographics.

Starting in 1900, the state's Mexican population grew rapidly due to a massive influx of immigrants seeking jobs in agriculture and manufacturing. By the end of World War II Los Angeles had one of the world’s largest urban Mexican populations. 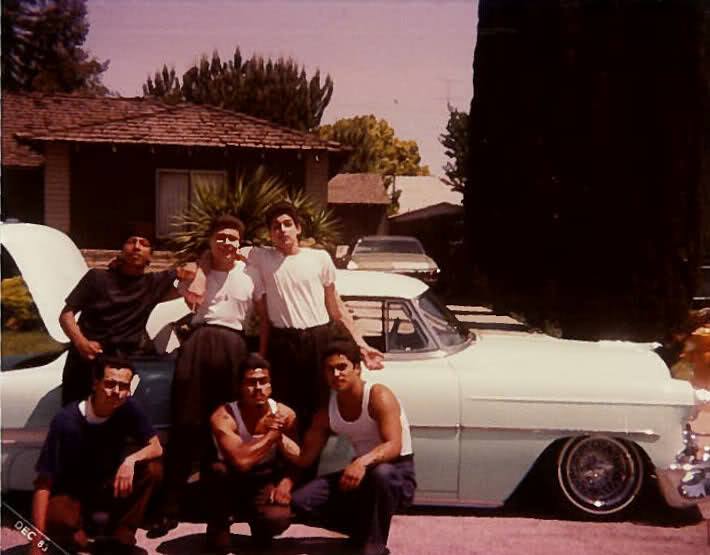 Mexicans in L.A., writes historian James D. Hart, got low wages, were crowded into barrios (ghetto neighborhoods), and were generally scorned by whites. Young people were stigmatized as pachucos (juvenile hoodlums). The "pachuco generation" was a term used by historian Carey McWilliams to describe these American-born kids who reached maturity in the early 1940s. 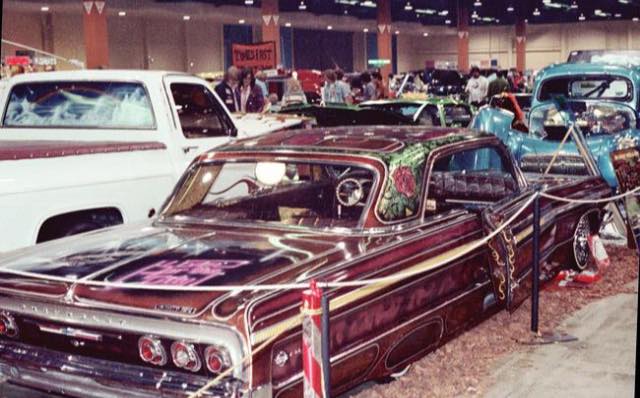 The parents of the pachuco generation, McWilliams writes, generally stayed close to home, seldom venturing from East L.A. into the downtown sector. By contrast, the new generation was "by no means so docile and tractable as their parents" and was lured to the "downtown shopping districts, to the beaches, and, above all, to the glamour of Hollywood." They made their journeys by car, and they liked to drive in style. Police harassed them but cruising continued - a bold assertion of freedom in the land of the free. They were "laying a claim," writes scholar Ben Chappell - "this is my city, my street, as much as anyone else’s."

The lowrider idea grew in the '60s and early '70s and linked itself to the emerging Chicano civil rights movement. As the '70s unfolded, lowriding edged ever-so-slightly into the American mainstream. The song "Low Rider" by the group War became a top-ten hit in 1975. A Chevrolet Impala lowrider christened "Gypsy Rose" appeared in the '70s in the opening credits of NBC’s "Chico and the Man" cruising down Whittier Boulevard. Articles in The New Yorker, Rolling Stone, and Car and Driver documented the spread of lowriding to many communities outside L.A. (In fact, one or two of these cities claim the birth of lowriding for themselves.) 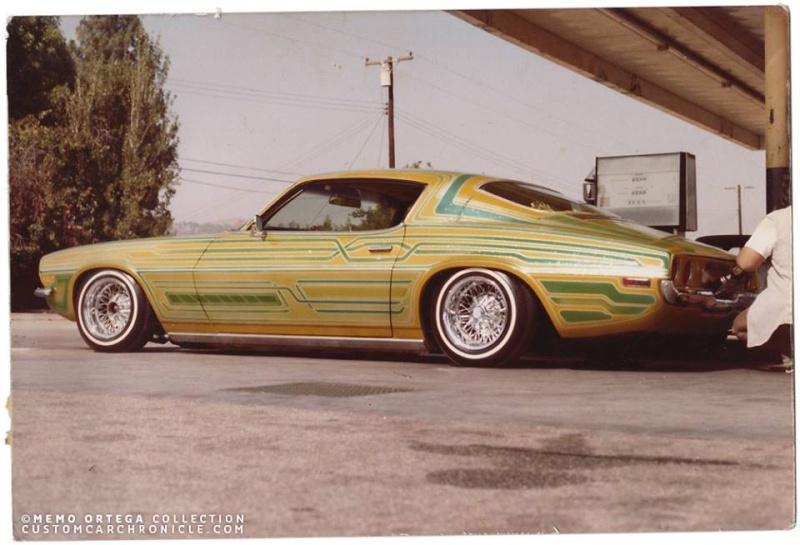 The 1979 film "Boulevard Nights," set on Whittier Boulevard, draws an explicit connection between lowriders and violent gang life - a controversial topic in the lowriding community. Although lowriders have indeed been used by gang members over the years, and gunshots have rung out at more than one lowrider gathering, the cars are largely a family affair, say some observers. According to James Sterngold, writing in the New York Times in 2000, mainstream lowrider clubs actively seek to wean Chicano youths from the lure of gangs. 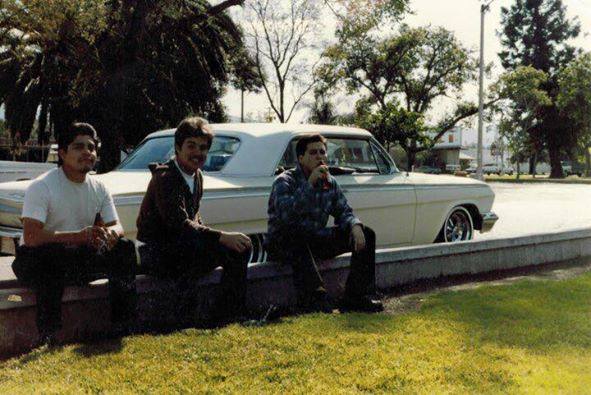 Lowriding gained significant exposure in the early 1990s when a spectacular Ford named "Dave's Dream" was featured in a Smithsonian Institution exhibition about New Mexico culture. The lowrider was "beautiful," reports Bill Withuhn, a Smithsonian curator - "it literally glowed in the sun; it was a magnet for crowds."

In 2000, lowriders were the focus of a four-month exhibit at the Petersen Automotive Museum in Los Angeles. The show was a milestone for the Chicano community, according to Sterngold in the Times - it was the first time lowriders had received focused attention from a mainstream museum in their hometown. 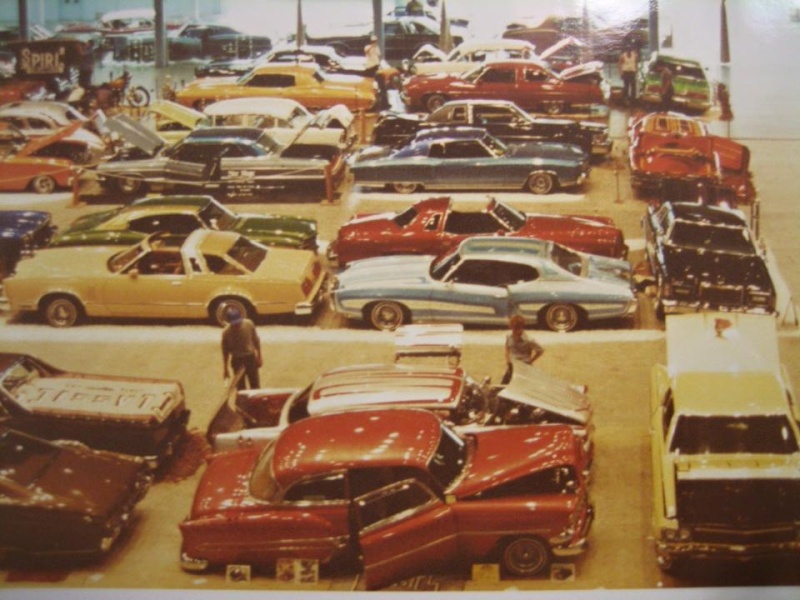 Today, lowriders are seldom seen on the street in the great numbers of the '70s - political pressure, enforced by the police, have generated clamp-downs in many communities. But organized lowrider shows and hopping competitions take place in many cities, including L.A., San Francisco, Las Vegas, Phoenix, Portland, Dallas, Denver, Houston, Indianapolis, and Miami. Lowrider magazine conducts many such shows annually around the country and counts more than 200,000 attendees and some 10,000 vehicles, according to publisher Chris Kobran, who notes that the U.S. has more than 500 lowrider clubs. 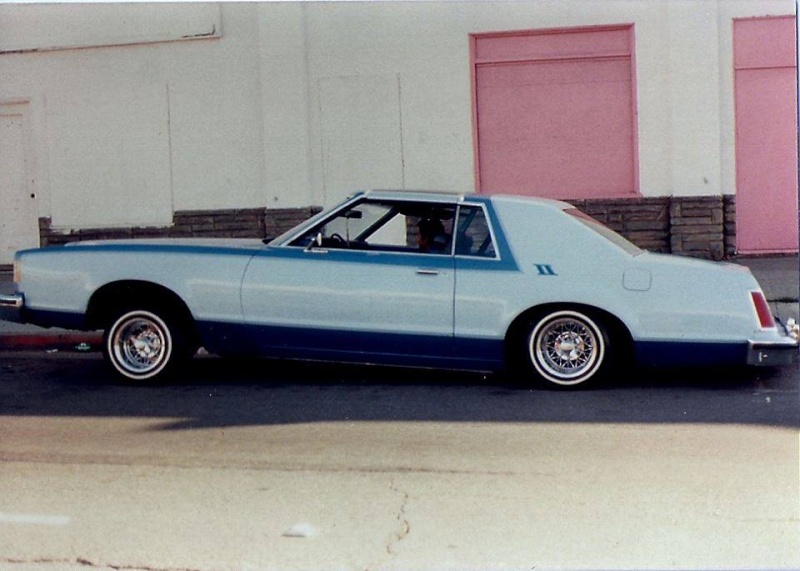 Aficionados often invest years of work and thousands of dollars in their creations, according to historian Denise Sandoval, who teaches at California State University at Northridge and wrote her dissertation on the lowrider tradition. Lowrider magazine recently ran a feature about a 1959 Chevrolet Impala that reportedly cost $25,000 to customize. 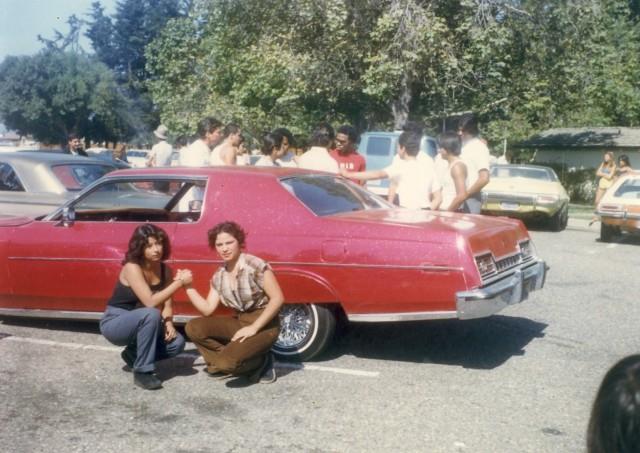 A lowrider community has also developed among African Americans; for example, hip-hop artist Snoop Dogg is an avid fan. Whites and Asian Americans, exposed to the cars through music videos and on TV, have also adopted the style to some degree. 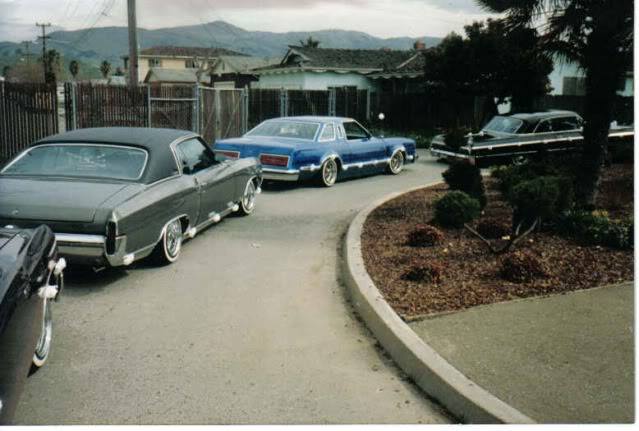 Journalist Dick DeLoach notes that custom-built lowriders are exported to Europe, Japan, and other parts of the world. Lowriding, he writes, continues to succeed as an "automotive sport and as a commercial endeavor." And as a statement of cool.