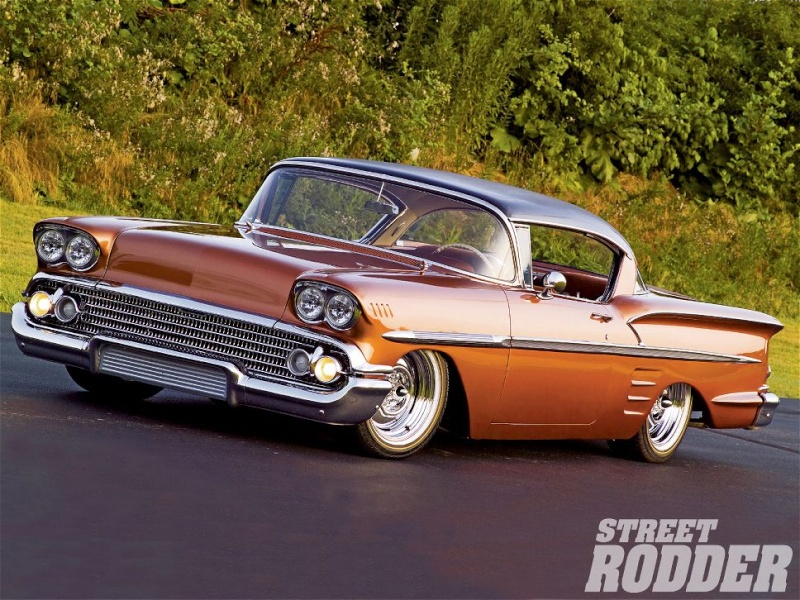 Being a fan of late '50s and early '60s American iron, it's no wonder Charles Shane chose a '58 Chevy Impala in which to build a mild custom of the same period. While the late '50s-era Chevys are commonly built as either restored drivers or as typical '50s customs with spotlights, wide whites, et al, Charles decided that a more mild approach would be more appropriate for the second-owner, 55,000 original-mile car. As he put it, "I had a different idea." 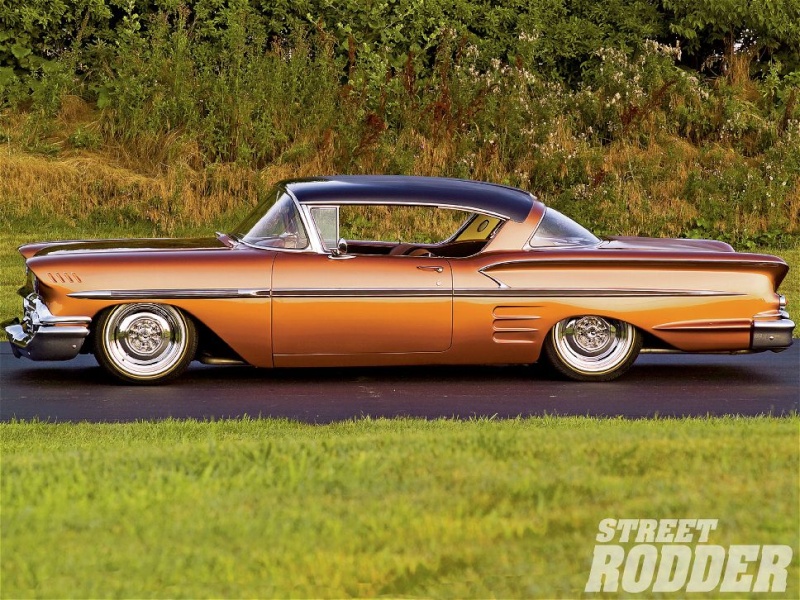 "I bought this car as a running basket case. It was in primer and had no interior, glass, or trim. I wanted to make sure of what I was working with so I sent it to Meadowlands Media Blasting in Meadowlands, Pennsylvania, where Kevin Kenuth stripped it to bare metal. I then put the talents of my own paintless dent repair business to work removing as many dings and dents as possible. This resulted in a super-straight car. 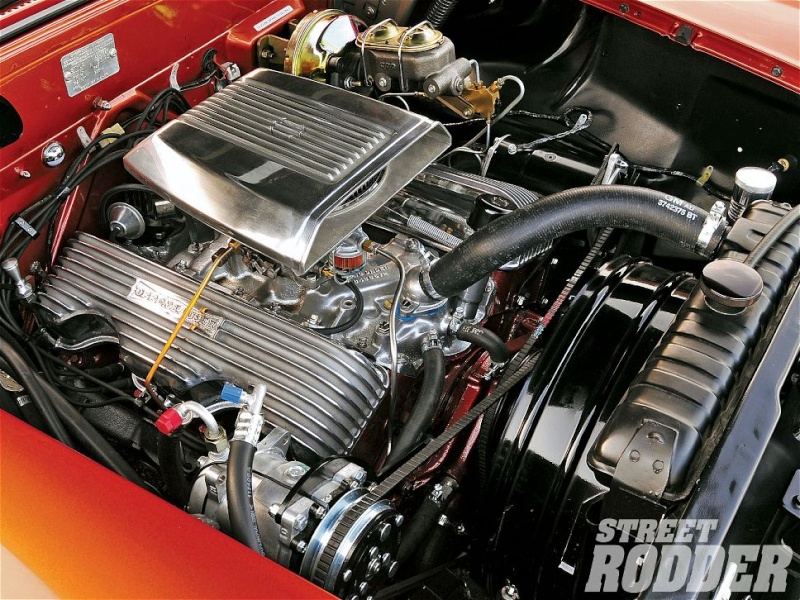 From there it moved onto Centerline Collision in Pittsburgh where Brad Spochaz and his crew put their magic touch to it. The result put the entire project on a whole different plane." 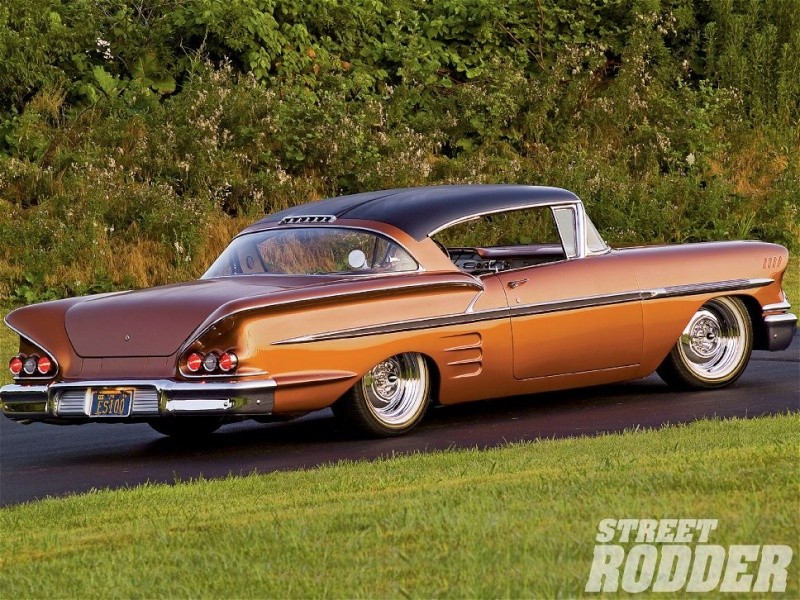 Nosed, decked, and partially shaved, the '58 relinquished a host of emblems and trim pieces before Spochaz and the crew blocked every square inch straight on the coupe. A custom copper hue using De Beers product was then applied to the lower two-thirds, while the roof was bathed in metallic black. 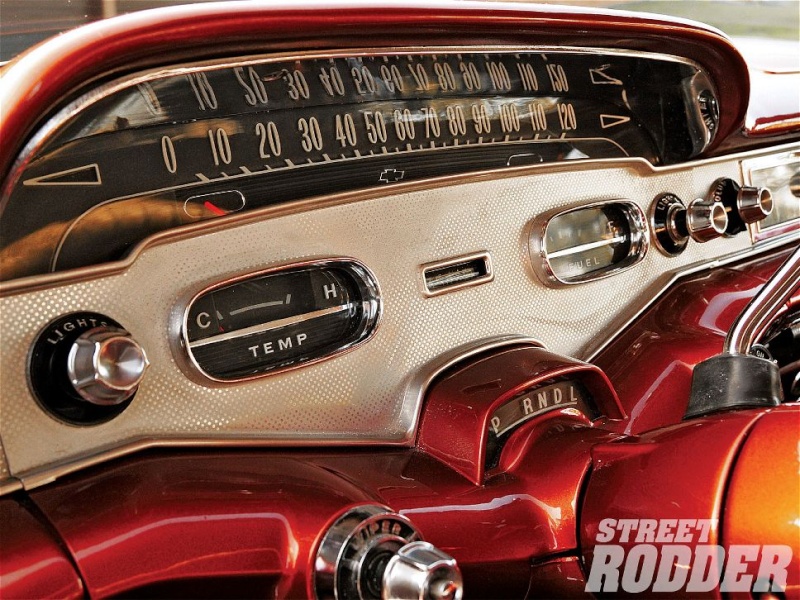 "After it was painted, my friends Dave Frost, Frank Pleil, and I started to reassemble the car. This is when disaster struck; the motor had antifreeze in it. So out comes the motor and it goes to Specialty Machine Operations (SMO) in Houston, Pennsylvania, for a complete rebuild with an emphasis on performance." 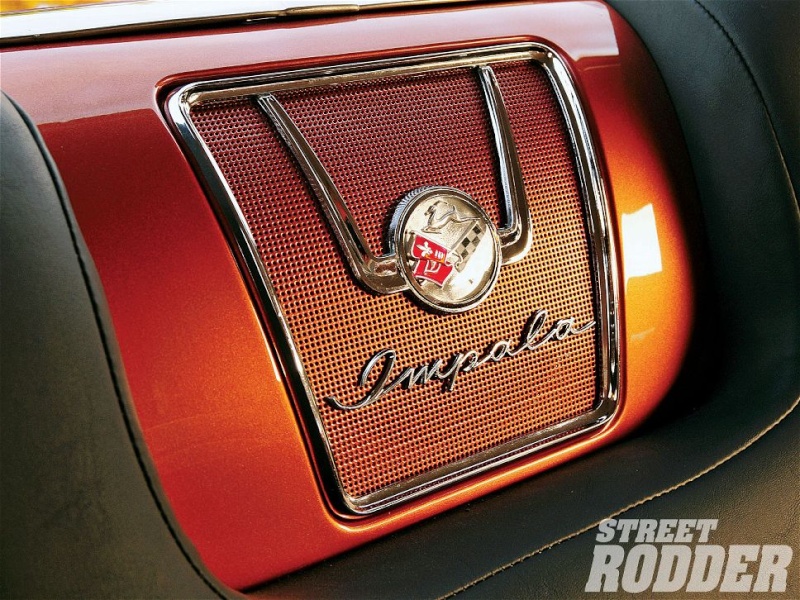 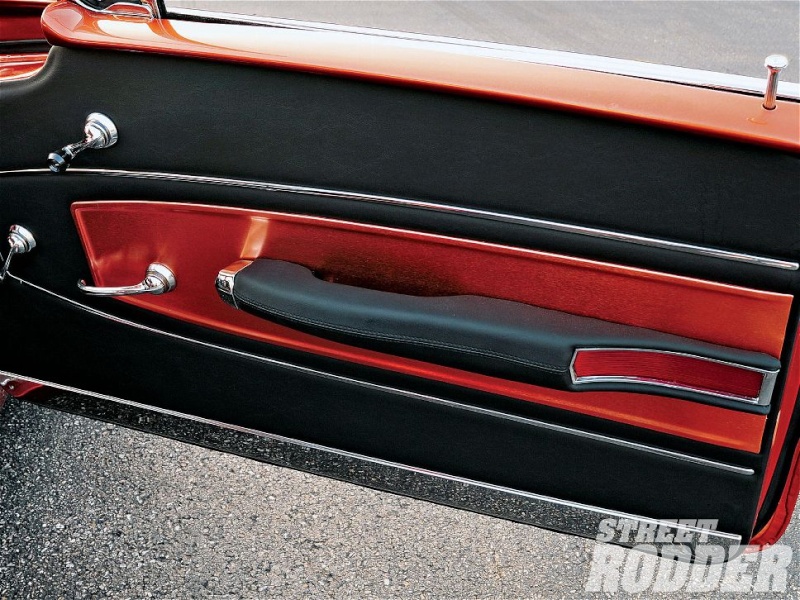 The crew at SMO tore the low-mileage 348ci Chevy engine down to the bare block and heads before machining and reassembling the long-block. While they were at it, a COMP Cams camshaft was installed to add a few ponies and a PerTronix ignition kit was dropped under the cap to provide a more reliable spark. The stock intake was detailed and reattached along with the Carter four-barrel carb topped with a vintage Cal Custom finned air cleaner. Matching Offenhauser valve covers add additional sparkle to the engine compartment while the Classic Auto Air and Powermaster PowerGEN provide creature comfort and peace of mind not found in the Impala originally. 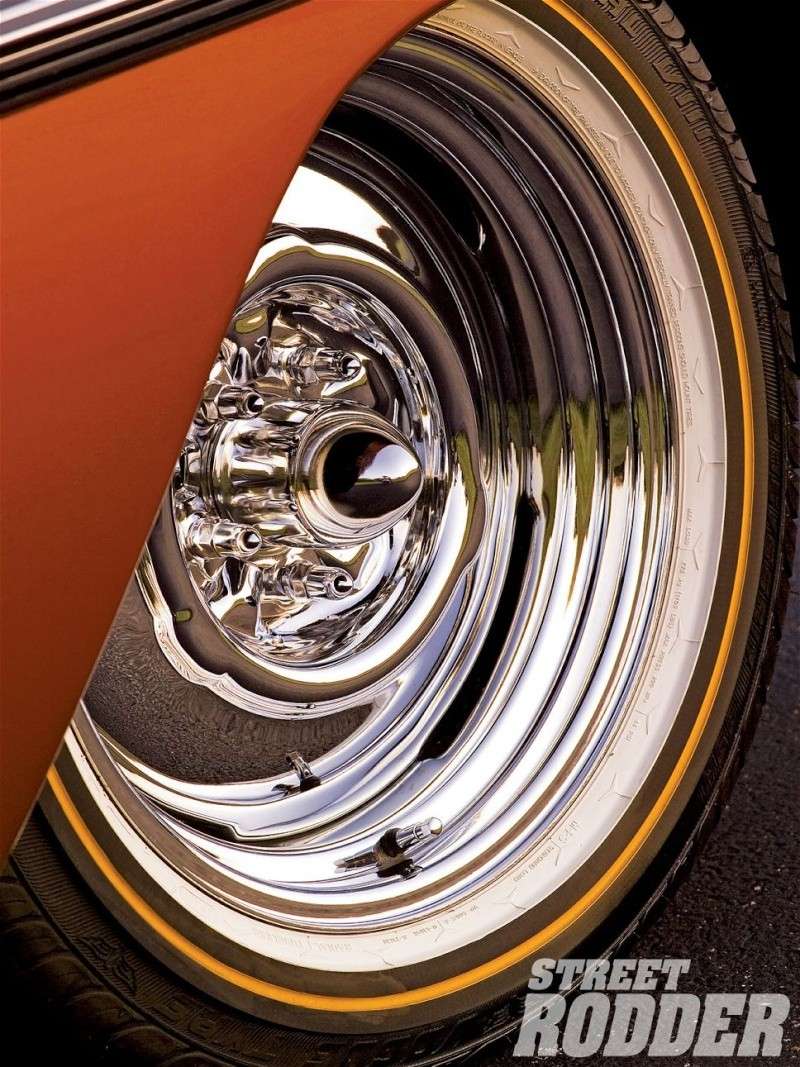 To get the Chevy to sit right, like a true custom, Charles had the stock suspension components rebuilt before installing RideTech airbags at all four corners. Classic Performance Products 11-inch disc brakes were the other modern amenity installed on the chassis. Stockton Wheels fabricated a custom set of steelies in 17x7 for all four corners wrapped in Vogue Tyres upon which the Impala sits. 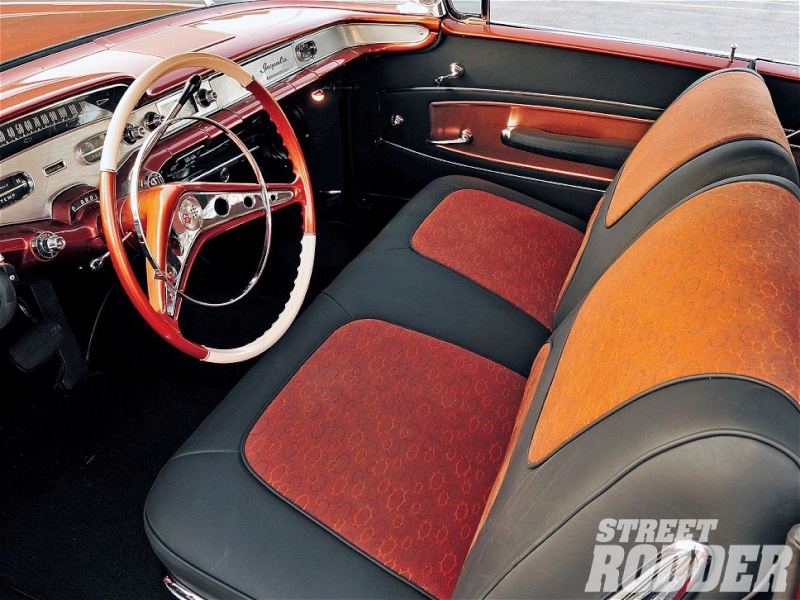 Laura Liptak, a local artist, found the copper-hued, '50s-inspired fabric, dragging Charles around the fabric store to show him the remnants she had spotted. Contrasted against a swatch of black Ultra Leather left no question in Charles' mind and he headed straight down to George Yago's upholstery shop in Jefferson Hills, Pennsylvania, with enough material to cover the interior of the car. 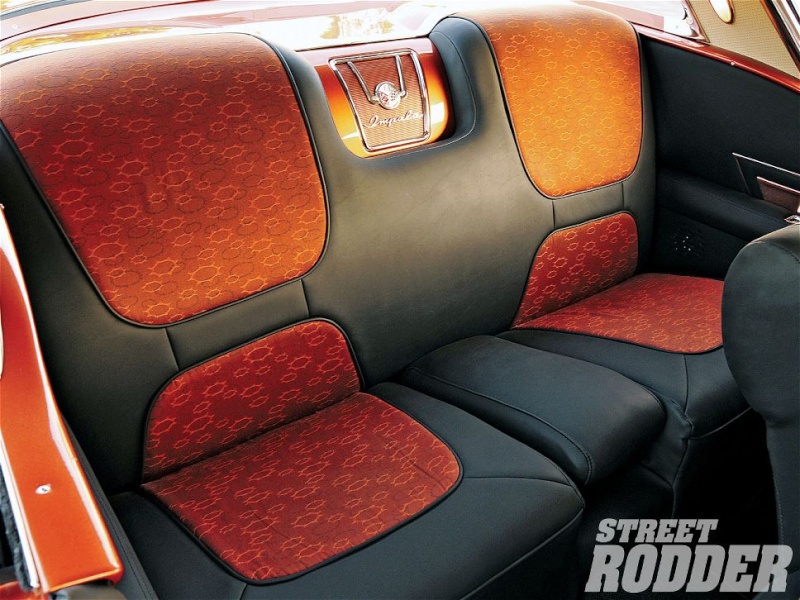 "From then on it was an uphill battle, fighting the old car and aftermarket gremlins to the finish ... 12 hours before the first day of the Goodguys Columbus 2009 show." 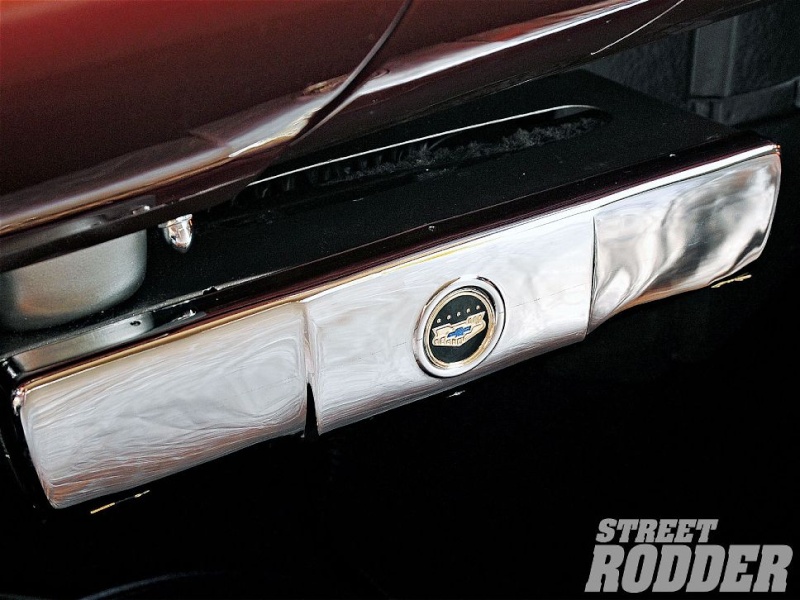 But Charles and the old coupe-cum-custom made it to the show, with the generous help from friends Dave Frost and Frank Pleil, without whom Charles reports none of this would have been possible. Here's to old cars, new customs, and good friends! 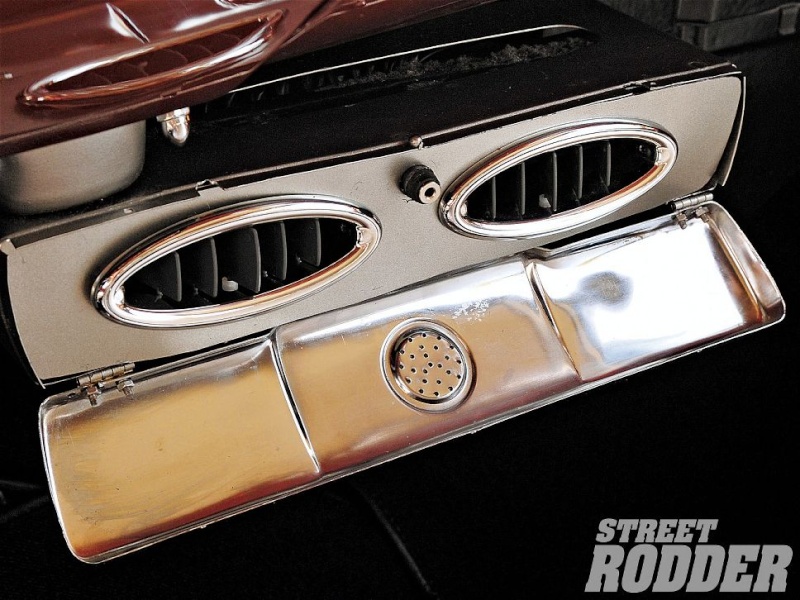