It’s refreshing to realize that there’s still a strong do-it-yourself ethos coursing though the rod and custom realm, despite the seemingly continuous stream of six-figure, professionally built, trailer-pampered rides clamoring for attention at any given vehicular gathering. And we’re not just talking barn finds or spray-bombed beaters, either. No, there are plenty of finely finished, “show quality”, owner-built customs being built, and we offer up Dan and Natalie Olsen’s sublime Merc as evidence. 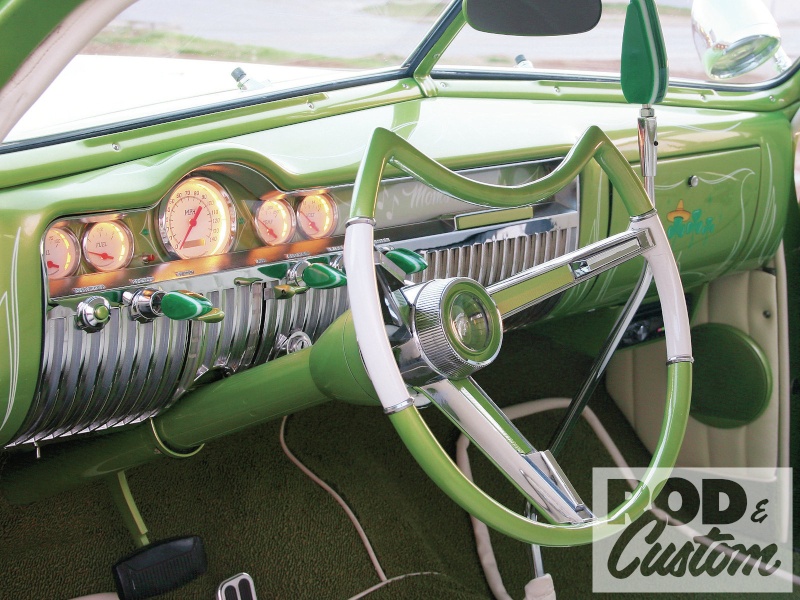 Dan built this knockout, low-lid Mercury almost exclusively in the couple’s Omaha-area garage—a fairly typical suburban three-car affair where Dan has mastered the efficient use of space. A second-generation hot rodder and full-time firefighter, Dan is no stranger to building eye-catching rides. His gold-and-flamed 1937 Ford sedan (also largely homebuilt) garnered a shelf full of awards a few years back, not to mention features in both Rodder’s Journal and STREET RODDER. When the sedan went down the road, Dan quickly scooped up a ’32 three-window coupe project, but also needed something roomier to keep peace in the household.

“I was originally interested in buying a station wagon for Natalie to drive to car shows,” Dan says. “We have two children—Bella and Sullivan—who like to attend, but a four-person family has trouble getting to a car show in a 1932 Ford.” Around this same time, Dan’s father and some friends began talking about an enigmatic old Merc that had long been the topic of speculation in the Southern Omaha car scene.

“The car could be seen outside in the elements for a year or two at a time and then it would be moved back into the garage,” Dan says. “It was an older build that was painted metallic blue. Half of the car had been sanded down to bare metal that was surface rusted. A couple of years went by before I made contact with the owner, and another year went by before the purchase. I asked Natalie if she wanted a wagon or the Merc; she said, ‘wagon’. I said, ‘Too bad, you’re getting a Merc!’” 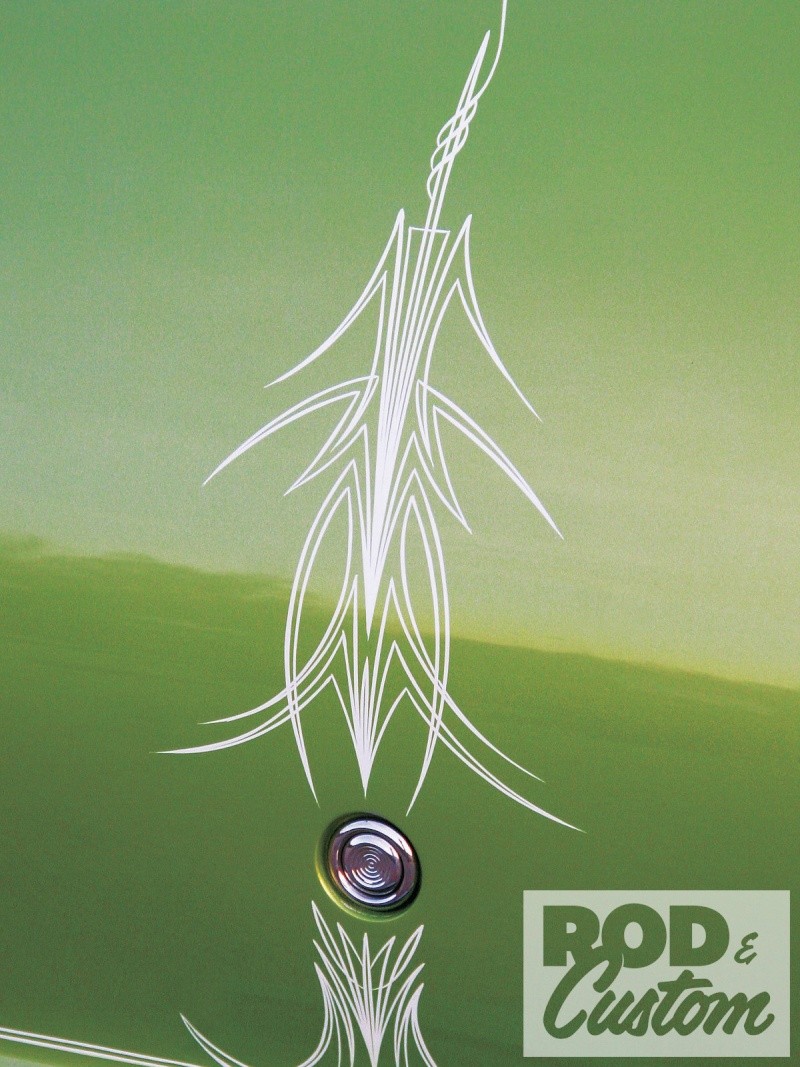 Dan’s affinity for Mercurys comes naturally, as he spent a good portion of his formative years cruising with his father, Harry, in a 1950 Merc—a car Harry still owns. Harry can also be credited with instilling Dan’s vigorous do-it-yourself attitude, a trait that led Dan to challenge himself to tackle as much of the Merc build as possible solo. This wasn’t just a personal quest; Dan also saw it as a means of preserving the hot rodding tradition imparted on him by Harry and his friends. “I knew it was time to learn this stuff if I was going to stay in the hobby,” Dan says.

Despite detesting bodywork, Dan dug right in and started stripping the Merc down to bare metal, making repairs and planning modifications. “I think chopping the top was the biggest, most rewarding experience,” he says. “I researched what I wanted to do, asked for advice and pictures from a few people, and chopped it by myself in my home garage. I did not want any help and even lowered the top without any help after cutting out 6 inches.”

In addition to the top slice, Dan installed ’56 Olds headlight rings and surrounds, a ’54 DeSoto grille in a molded shell, ’56 Ford front bumper, and ’50 Lincoln taillights. He also did the usual rounded corners and emblem removal and added Lincoln push-button door handles. “Basically, I did all of the custom modifications that I had seen and liked in the past,” Dan says. All of this work was ultimately soaked in a striking metallic lime green tint—a color Dan found on an ’11 Ford Fiesta and enhanced with gold pearl powder “until we liked it”. And, yes, he sprayed the finish himself, using a friend’s makeshift paint booth to get the job done. Longtime pinstriper Jim Curran was called in to pull some intricate late night lines over the color basecoat before Dan covered everything in clear the next morning. 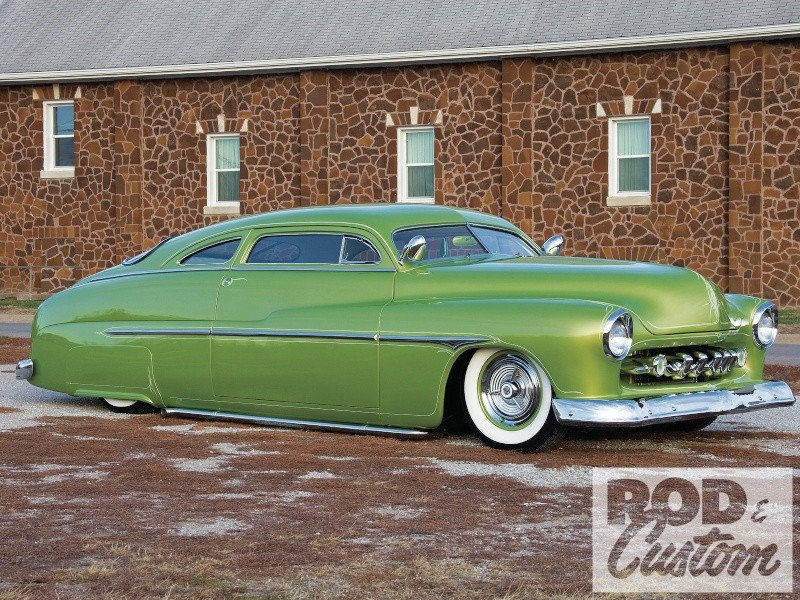 The DIY mantra held true for the Merc’s mechanical metamorphosis, as well. “I challenged myself to fab and install the air ride suspension system and drivetrain,” Dan says. This included C-notching the frame to better clear the 9-inch rearend and adding dropped spindles up front. As for the running gear, Dan swapped a rebuilt 351 Windsor and AOD transmission in place of the original Flathead. (Not to fear–the Flatty will find a good home in one of Dan’s now-multiple Deuce projects.)

When it came to stitching the Impala bench and stock rear seat, Dan did enlist a bit of outside assistance. “My dad, Harry, stitched the interior, as I cut patterns, marked pleats, and installed the sewn material on the panels and seats,” Dan says. “Harry also helped with some wiring.” 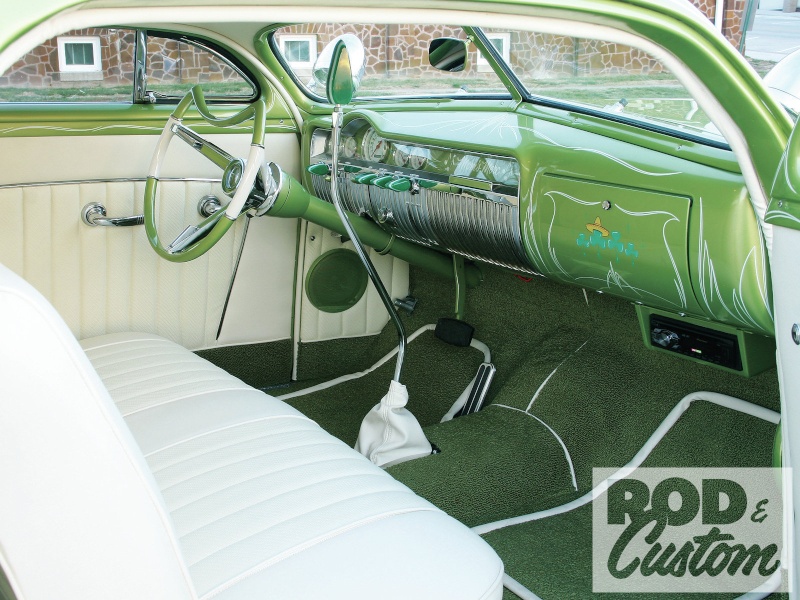 Dan is understandably proud of his personal accomplishments in building the Merc, though he is quick to give credit to the friends who offered moral support, advice, and crucial helping hands. “Joe Inserra provided advice, tools, and assisted with the back window install, prepping paint, and let me borrow a good paint gun,” Dan says. “Roger Gallager helped on paint day (moving hoses and parts around, running errands). Several other friends should be mentioned for providing parts, advice, and time: Del Luehring, Mark Ervin, Dave Huxhold, Mike Mantell, John Hogaland and, finally, Jeff and Bernie.”

Yes, folks, you can still build a top-notch custom in your garage. It takes resolve. It takes time. It takes friends and family offering good help and advice. And yes, it does take some talent. But as the sublime results of “Mom’s Merc” show, it can be accomplished. Now we’re anxious to see if Dan can deliver a repeat performance with that hot rod Deuce in the corner of his garage.
Chassis 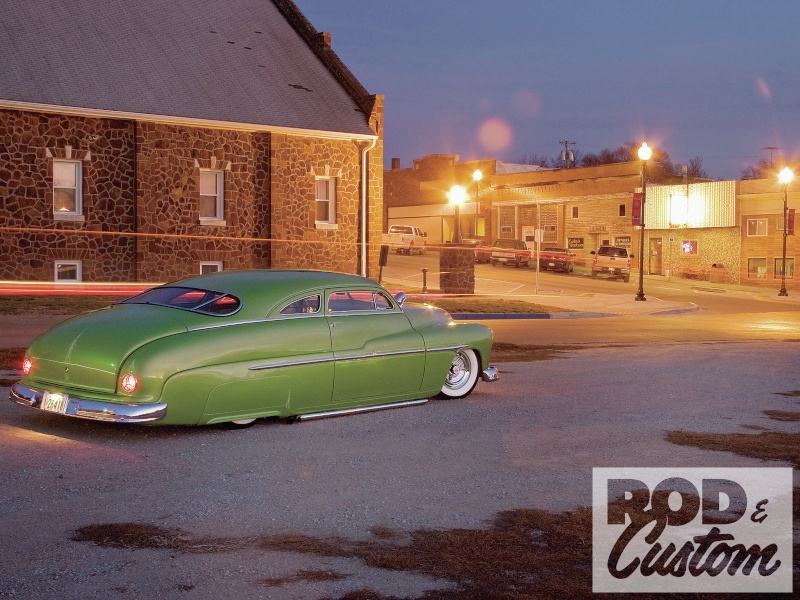 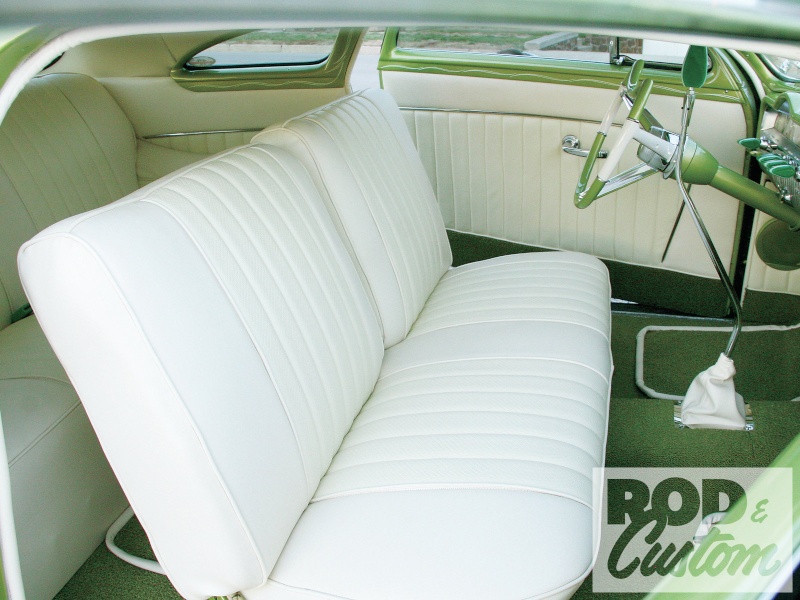 Dan did some horse trading to get the ’71 351 Windsor V-8, an older rebuild to which he added a Power Plus intake, Edelbrock carb, and HEI distributor. He also added finned aluminum valve covers from Speedway Motors and an authentic ‘50s-era Cadillac air cleaner. The aluminized exhaust dumps out just behind the Speedway lakes pipes. An ’86 AOD transmission helps ensure comfortable highway cruising. 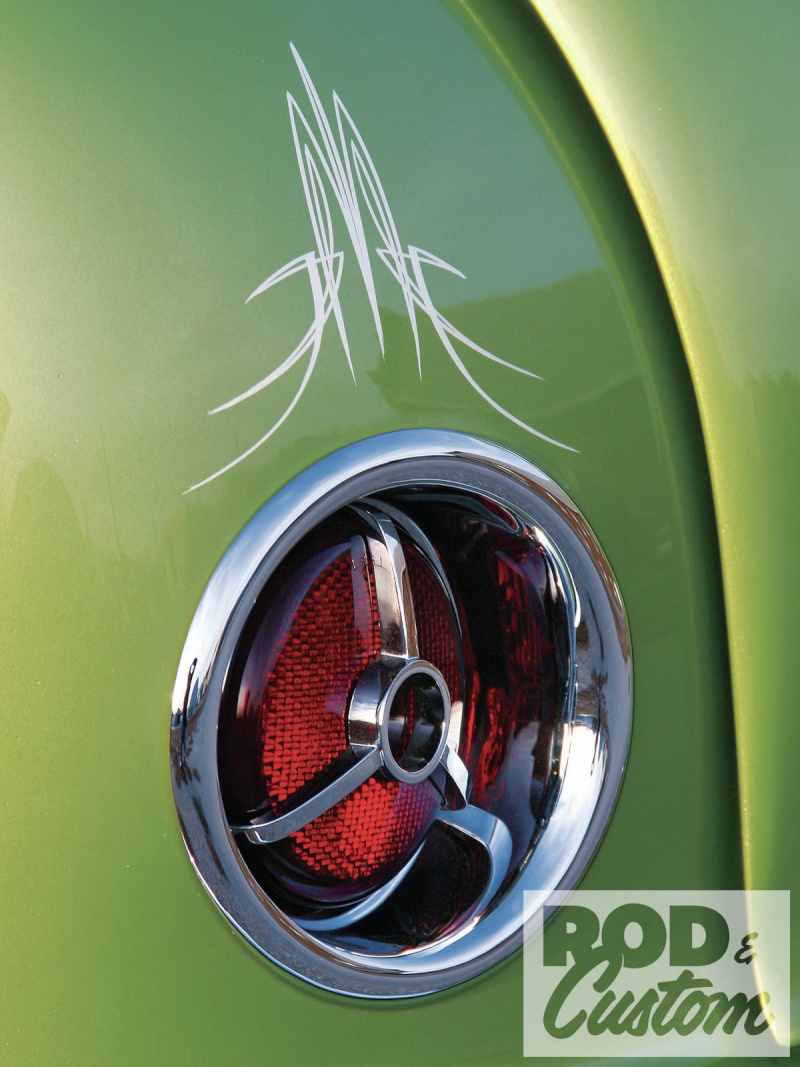 Dan’s no professional bodyman, but it’s hard to tell looking at that sleek green body. Starting at the top, Dan chopped the lid 6 inches in front and somewhere in the neighborhood of 8 in the rear. Headlights from a ’56 Olds lead the way up front, complemented by rounded hood corners, a ’54 DeSoto grille in molded opening (with an inverted grille surround rounding out the lower portion of the opening), and a cut-down ’56 Ford bumper. The ’51 Packard side trim—lengthened through the doors by Andy Leach at CAL Automotive Creations—directs your eye from front to rear, where ’50 Lincoln taillights grace the corners. Lincoln push buttons actuate the doors and decklid. The brilliant green paint is an ’11 Ford Fiesta color accentuated with gold pearl powder. It’s finished off with intricate pinstriping by Jim Curran buried under the clearcoat. 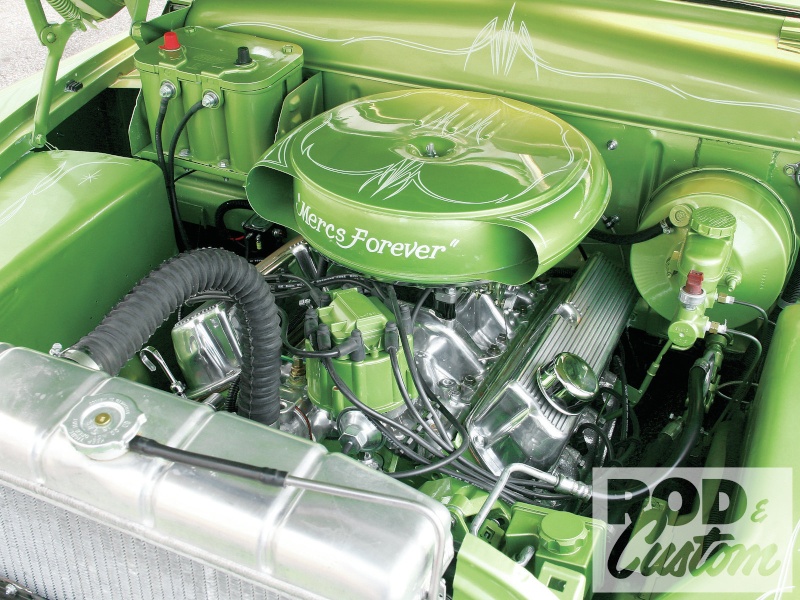 Dan enlisted the help of his dad, Harry, for the pleated white vinyl upholstery covering the ‘60s-era Impala bench seat and stock rear. Green loop-pile carpet with white trim really helps to set things off. Dan fitted the stock Merc dash with Omega gauges and Vintage Air, adding a Pioneer stereo and speakers to the mix, as well. The cut-down steering wheel began life in a ‘60s-era Merc, while the long swan-neck shifter came from Lokar.
_________________
We don't care the People Says , Rock 'n' roll is here to stay - Danny & the Juniors - 1958