Gary "Chopit" Fioto is a self-taught metal artist who has been perfecting his technique since the tender age of 12. Now in his 50s, he has spent more than three quarters of his life creating automotive and motorcycle masterpieces. Gary is a designer who does not use a drawing board, but instead creates show-winning automotive art from images in his mind. His work has been the subject of dozens of magazine feature articles and he has regularly shared the winner's platform with some of the scene's top players. His personal ride, the wild bubbletop dubbed Beatnik, won the big-ticket Go For The Gold award at Darryl Starbird's Tulsa show in February 2006. 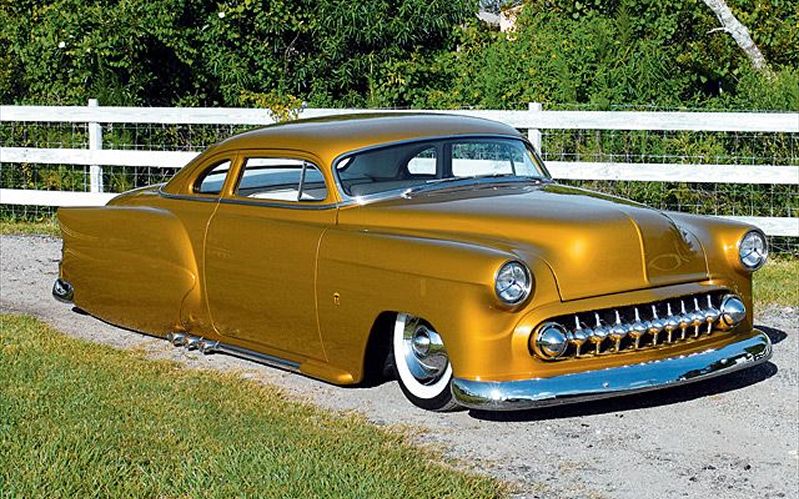 A couple years ago, Gary relocated his full-service custom shop, Chopit Kustom (www.chopitkustom.com), from Long Island, New York, to a 9-acre spread in New Smyrna Beach, Florida, where he enjoys life in the country with his wife and three children. Gary has no intention of retiring, though. His reputation puts him in demand with customers around the country, which is how things began with Brian Lovely's '53 Chevy. Brian, a New York resident, drove his stock 1953 business coupe from California to New York (shortly before Gary's move) to have Gary chop the top. Once the lid was lowered, Brian asked if Gary had any ideas for the rest of the car and, well, you can see the results. Soon, Brian's plain-Jane Chevy had been completely transformed. 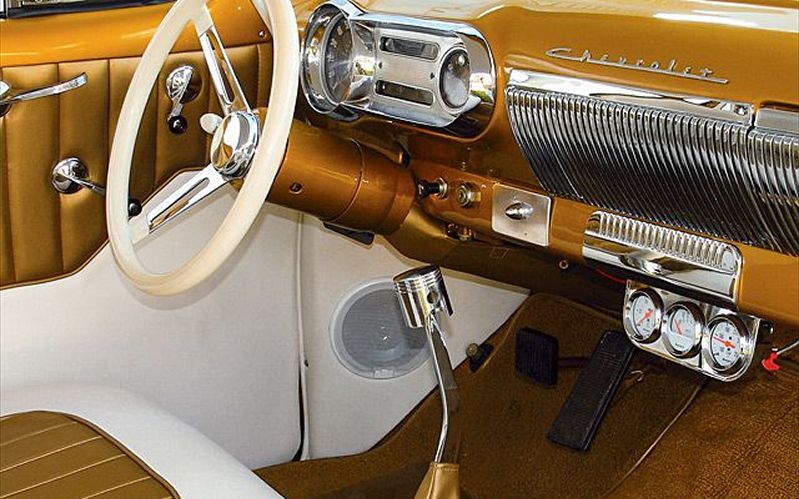 The makeover began with Gary's signature move-slicing 6 1/2 inches from the top. He leaned the B-pillars forward and retained the rain gutters and vent windows. The original windshield was cut to fit the new opening, and the factory moldings around it were trimmed accordingly. 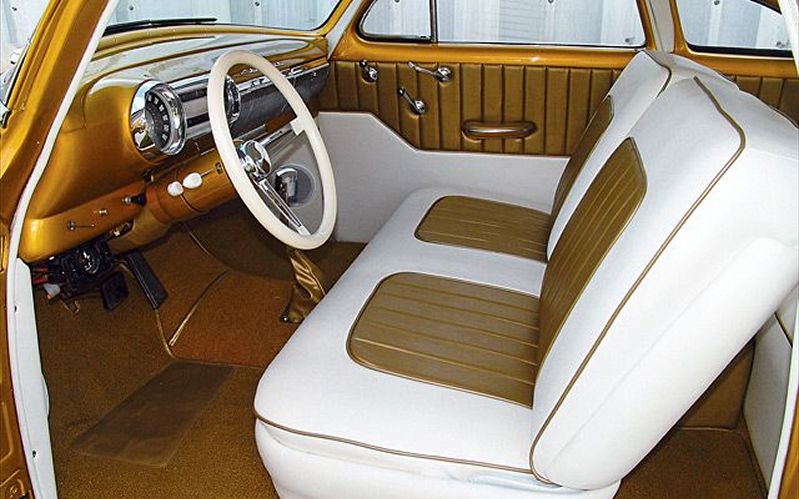 The radically altered profile demanded some commensurate moves in front and back. First, the rear quarters were cut and new sheetmetal formed to house '56 Packard taillights in a manner that makes them look like factory additions. Gary cut and narrowed a 1952 Cadillac rear bumper, adding bumper guards and a molded custom pan. Following '50s tradition, Gary also added a subtle, raised metal frame around the trunk-mounted license plate. Then, showing his versatility with an English wheel, he turned his attention to crafting those 5-foot-long, form-fitting fender skirts. "I try not to take away from the beauty of the original lines," he says. "I think these skirts work very well with the car." For a ground-hugging accent, the Chevy received partially frenched three-plug lakes pipes. 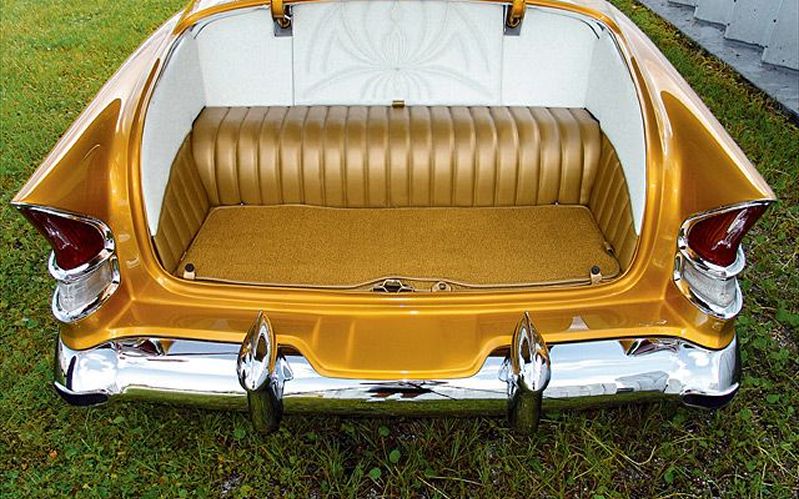 Once he was happy with the rear restyling, Gary moved forward, eliminating the hood seam and creating a center peak at the front. Tri-bar headlights were frenched using '52 Mercury rings, and additional teeth were added to the grille, which also sports 4-inch bullets on each end. Gary installed reflected bulbs inside each bullet to act as parking and signal lights. Finally, the bumper was smoothed and the pan welded smooth to ensure a clean, finished edge wherever you look. To finish everything off, Gary whipped up a rich, custom-mixed gold paint with which to lavish the sheetmetal. 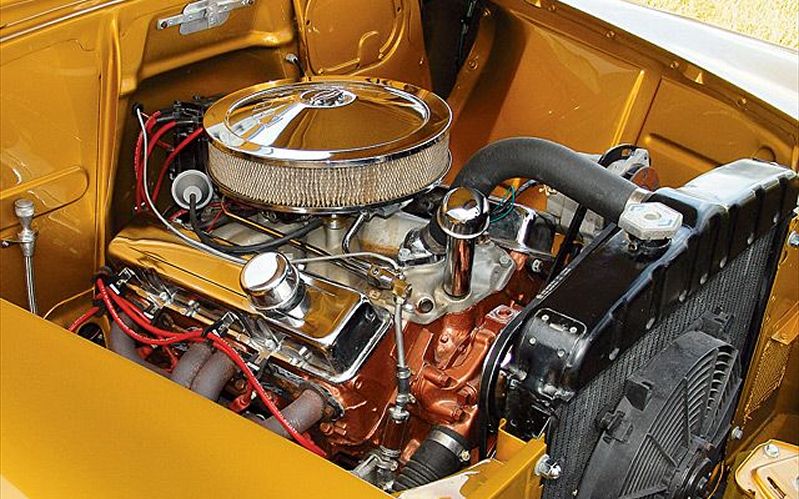 With the body mods complete, the chassis needed its share of rejuvenation. The framerails were Z'd 18 inches in the rear in order to give the 12-bolt Chevy rearend plenty of clearance when the air springs were deflated. The trunk floor was reworked to accommodate the changes. The new Mustang II frontend updated the steering and brakes, while two more air springs put altitude control at the driver's fingertips. Gary offset the front wheels slightly so the Coker wide whitewalls and Sombrero hubcaps would clear when the car was on the deck. The final powertrain element was a rebuilt 350ci Chevy V-8, which was fitted with a 600-cfm Demon carb, electronic ignition, block-hugger headers, and Turbo 350 automatic transmission. 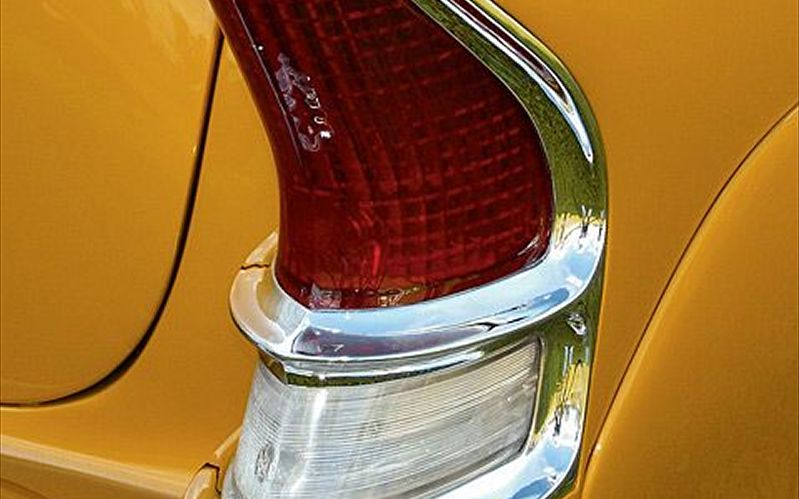 Gary redesigned the interior and did the upholstery work in house. The seats, door panels, and headliner were stitched in white Naugahyde with pleated gold inserts, and the trunk was upholstered to match. The original speedometer was augmented with underdash SunPro gauges, the late-model tilt steering column was equipped with a Mooneyes wheel, and the floor-mounted shifter was topped with a piston-shaped knob for some nostalgic fun. The aftermarket stereo in the glovebox plays through speakers in the kick panels and the rear of the custom center console.

Gary spent a total of about six months working on the Chevy, over a period of about a year and a half. It has now been finished for more than a year and, needless to say, never fails to draw a crowd wherever it goes. Of course, what else would you expect from a guy named Chopit who's been hammerin' on cars for four decades? 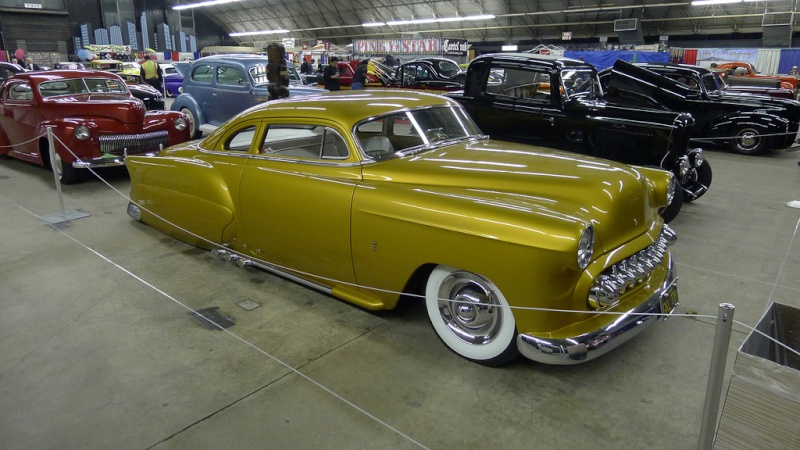 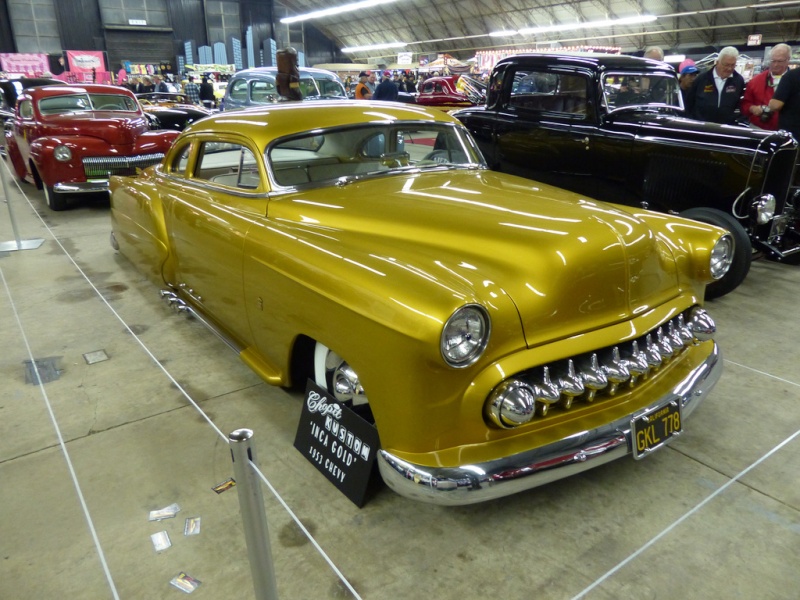 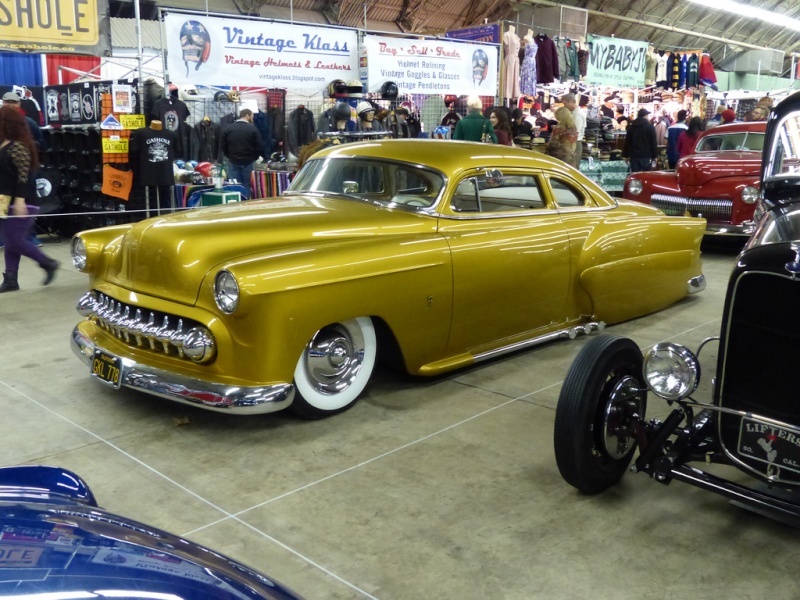 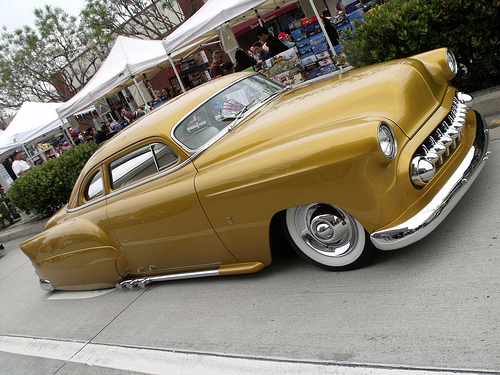 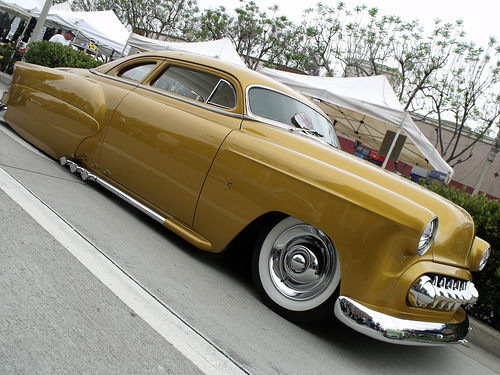 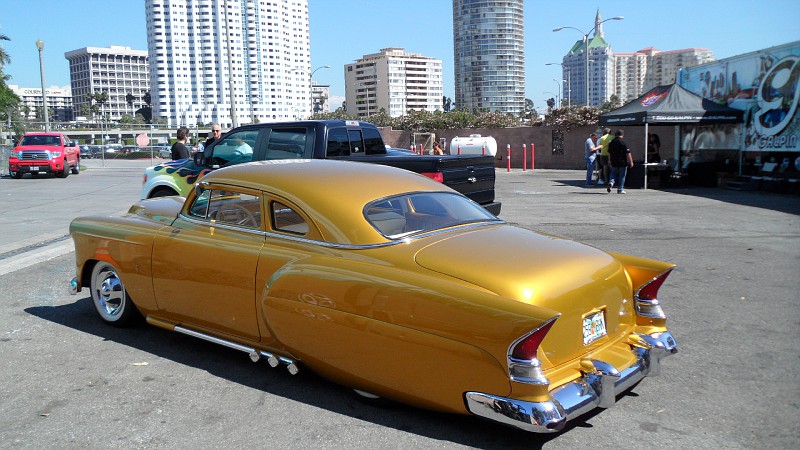 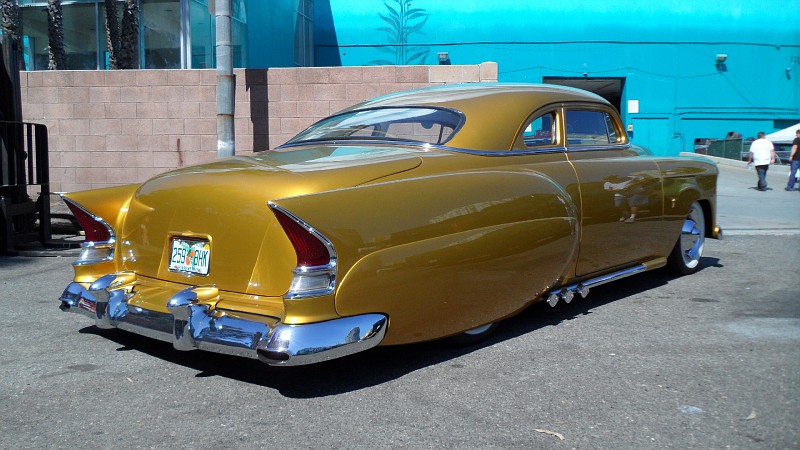 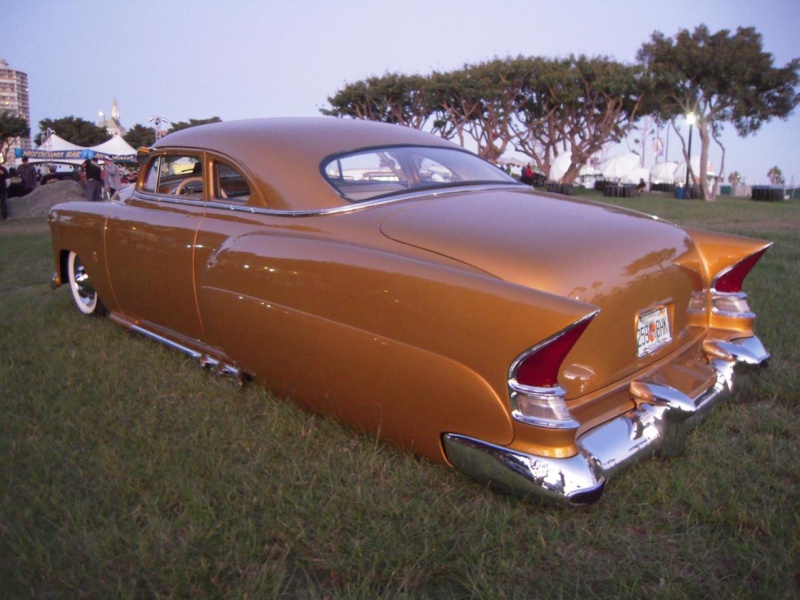