Last week, we wrote about the famous Dodge Deora concept that was based on the 1964-70 Dodge A100 unibody compact pickup. The Deora's radical cab-forward styling grabbed the attention of young and old when it debuted in 1967, but with minimal cargo-carrying capability and oddball features, like a front-opening cabin and swing-out steering wheel, it was never practical for production. That doesn't mean the idea didn't have merit, though, because Ford followed up with its own version of the Deora in 1973, called the Ford Explorer SUV concept. 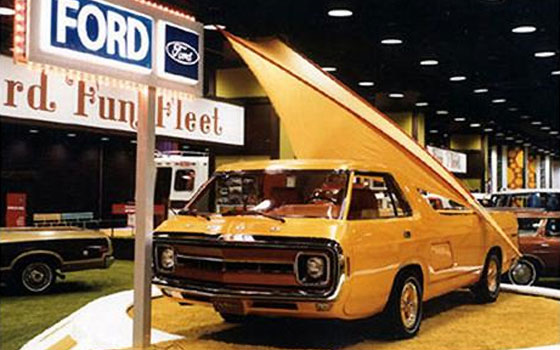 Ford's vision of a proper sport utility vehicle hadn't yet been cast into the four-door, truck-based form that we know most modern SUVs to be when the Explorer SUV concept was penned. Nor had the Explorer name been permanently attached to a single vehicle, which didn't happen until 1991 when the Ford Explorer compact SUV went on sale. 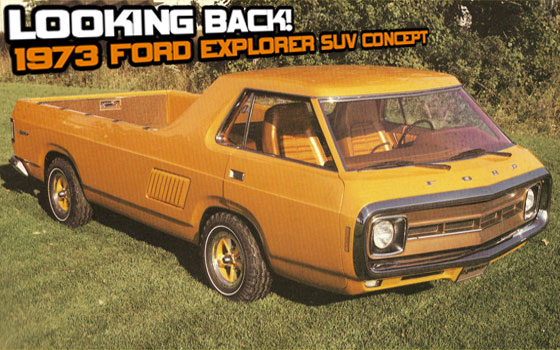 In the late '60s and early '70s, Ford, like Dodge and Chevrolet, was still smarting from the rejection of its small, blunt-faced pickups by traditional truck buyers. Ford's Econoline pickup was derived from its first-generation E-Series vans, built from 1961-67, and based on the Ford Falcon car. Econoline pickups featured low prices, but Ford truck buyers never warmed up to their unconventional looks and low-rated towing and hauling numbers relative to Ford's full-size pickups, like the F-100 and F-150 from the same period. By 1970, every one of the Big Three automakers stopped selling these trucks. 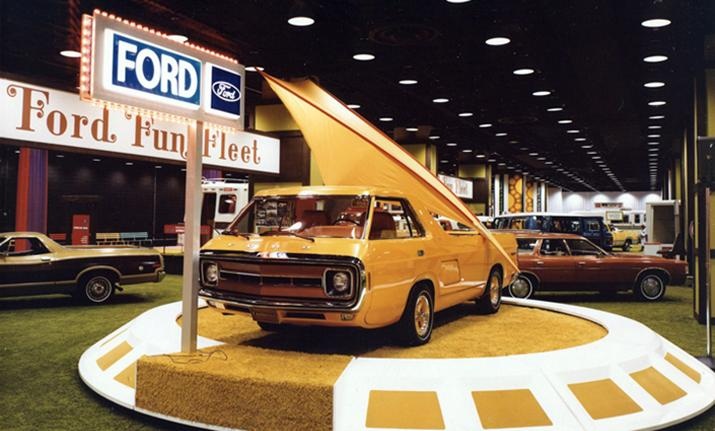 But the success of the Deora concept must have gotten Ford's design team fired up, because the Deora was built using many pieces from Ford's parts bin. The Deora's front-opening windshield was the rear window from a 1960 Ford station wagon. Its back glass was taken from a 1960 Ford sedan, and the side exhaust vents were taillight bezels from the Ford Mustang. The Deora's taillights also borrowed the sequential turn-signal units from the Ford Thunderbird.

The biggest improvements: Ford kept the Deora's futuristic cab-forward design but made the Explorer concept practical by giving it two conventional doors and a standard steering wheel.

Ford also replaced the old Econoline pickup's six-cylinder engine with a mid-engine, 429-cubic-inch V-8 that was shared with the Ford Thunderbird and Mustang in response to customer complaints that the first generation of forward-control pickups lacked power. The engine's exhaust ports, like the Deora, were positioned on the sides of the Explorer's cargo box.

What about the Explorer name that Ford attached to the concept? It was first used by Ford in 1968 to market a limited-edition "Explorer Special" equipment package for Ford's pickup trucks. That same year, Ford sent 20 F-Series light-, medium- and heavy-duty pickups on a 3,500-mile trip from the tip of Florida to the tip of Mexico's Yucatán Peninsula, plus a 130-mile rigorous evaluation run across Texas to prove how tough Ford trucks were in the wild and when scientifically measured. The Explorer name celebrated the grueling truck tests.

The Explorer SUV concept represented the next generation of adventuresome capability for Ford trucks. In keeping with the spirit of the Explorer name, the show truck featured a pop-up tent that was stored in its cargo box.

Ultimately, though, the Ford Explorer concept never achieved the notoriety and critical acclaim that the wholly original Dodge Deora had. Ford's sleek pickup-truck styling exercise faded away into obscurity after a brief time on the auto show circuit.

Ford wouldn't be the last to try to resurrect the original hopes of the Big Three's '60s-era, car-based pickups. In 1988, GM reinvented the Chevrolet Corvair pickup in the aerodynamic form of the GMC Centaur concept. It even duplicated the Corvair's unique rear-mounted engine setup. Still, even after two decades had passed, truck buyers weren't interested in reviving these dead-end trucks.

Today, the lost legacy of the 1973 Ford Explorer SUV concept pickup is carried on in its distant relative, the Ford Explorer Sport Trac, which Ford officially considers to be a sport utility vehicle.
_________________
We don't care the People Says , Rock 'n' roll is here to stay - Danny & the Juniors - 1958