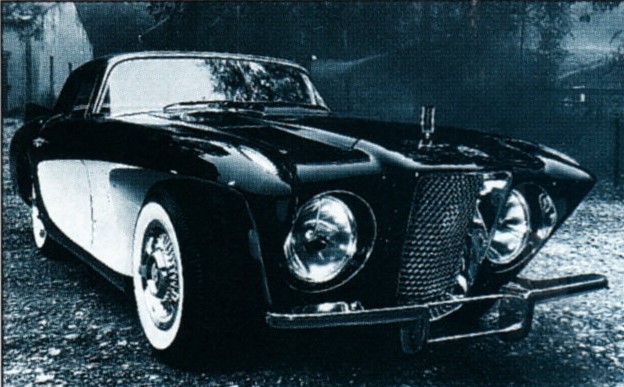 The 1955-57 Gaylord "Gladiator" is one of the rarest and most unique of the 1950's cars. Developed by the super-rich Gaylord Brothers of Chicago to compete with the world's best vehicles, including Rolls-Royce, the captivating shape of this ultra-luxury sports car was penned by legendary designer Brooks Stevens, who later went on to create the "neo-claissical" Excalibur cars of the 60's and 70's. The Gladiator featured a retractable hardtop, a tire that slid out on a tray from the back of the vehicle and was to be manufactured by Zeppelin in Germany, for ultimate quality! It made its world appearance at the 1955 salon de Paris. Unfortunately, 25 orders were needed to keep the project afloat, but they never came. 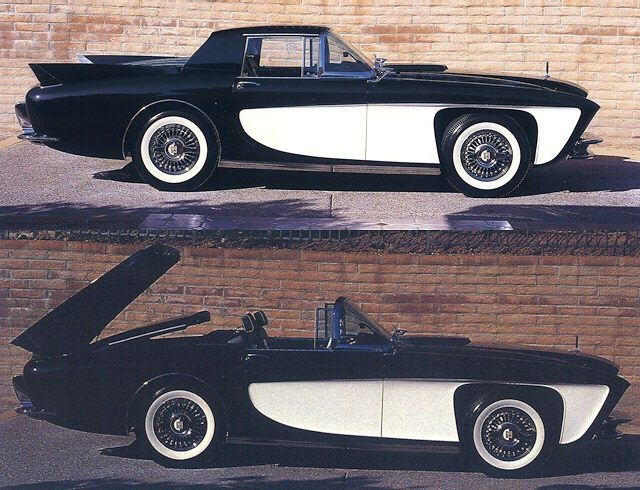 There were actually two versions of the Gladiator. The prototypes, handcrafted by Spohn Company in Ravensburg, Germany (shown above), came in two versions, a 2 door and a 4 door, both with exposed front wheels and huge headlights.

The "production" version, shown in the photos below was made by Lufschiffbau Zeppelin in Freidreichshaven, Germany (yes, THAT Zeppelin!), had enclosed front wheels and "quad" headlights. I much prefer the prototypes, however, that fender/headlight style was dropped apparently because of roadway debris. The enclosed wheel wells featured illumination. (Jim Gaylord was such a perfections that he is rumored to have had a nervous breakdown as the project neared completion.) 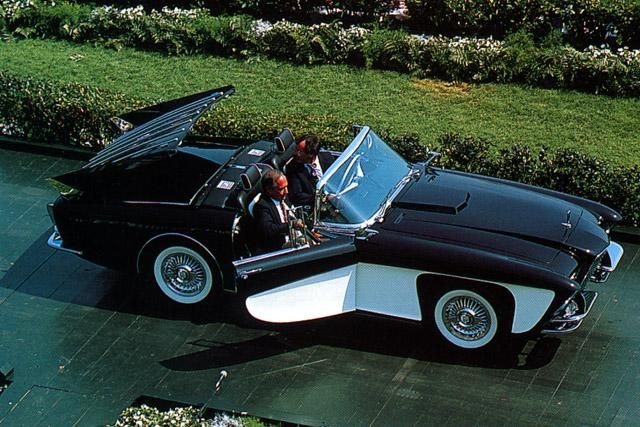 As for performance, the original Gladiator was powered by a 365-cid Chrysler Hemi V-8 (also used in the gorgeous Chrysler C-300) but the production versions were to have a 305 hp Cadillac V-8. The Gaylord weighed over 4,000 pounds, yet could hit 120 mph easily and accelerate from 0-60 mph in 8 seconds, which was pretty spectacular for the day. So was the price: $17,500! That was almost twice as much as the most expensive Cadillac of the time, the stunning El Dorado Brougham.

The Gaylord's retractable roof was particularly ingenious. With the push of a button, the rear decklid lifted on a pair of electric supports, then the top was pulled back into the trunk by a chain drive. The roof itself contained a recessed rear window and extractor vents for stale cabin air. Ford stylists took many photos of this system, but the later Ford retractable system, which first appeared in the 1957 Ford Skyliner, was a much more complicated affair than that in the Gaylord.
_________________
We don't care the People Says , Rock 'n' roll is here to stay - Danny & the Juniors - 1958 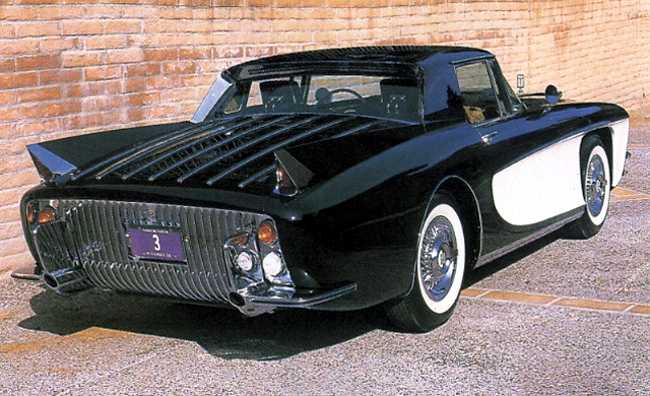 Jim Gaylord had designed a very strong chrome-molybdenum tubular chassis, using coil springs and A-arms for the front suspension and a beam axle with leaf springs for the rear. The suspension make extensive use of rubber and the passenger compartment was virtually impervious to shock from rough road surfaces. 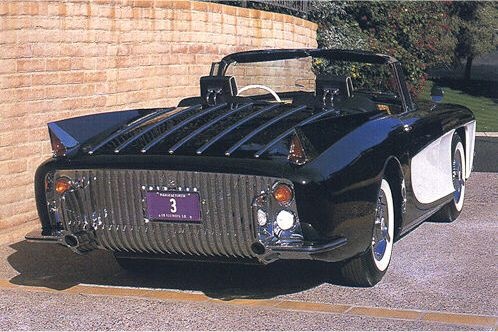 Unfortunately, only the Spohn prototype and three Zeppelin-made Gladiators ever saw the light of day and the Gladiator is now just an interesting footnote in automotive history. Two of the Gaylords were last seen at the Early American Museum in Silver Springs, Florida, although it appears to have shut down. One is supposedly in Germany. Rumors abound. Unfortunately, other attempts to locate the Gaylords have met only with frustration. You can watch a Gladiator in action (somewhat) here. 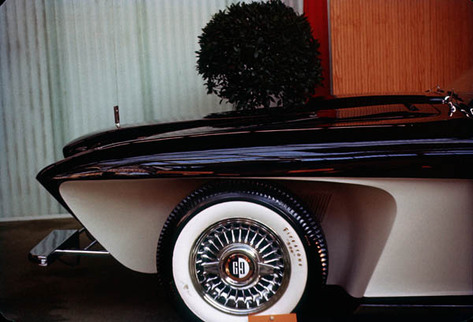 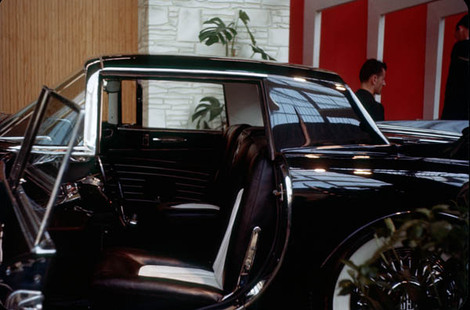 The Gladiator was the recipient of a full review in 1981 in Special Interest Autos.
http://www.chrisinmotion.com/GaylordGladiator.htm 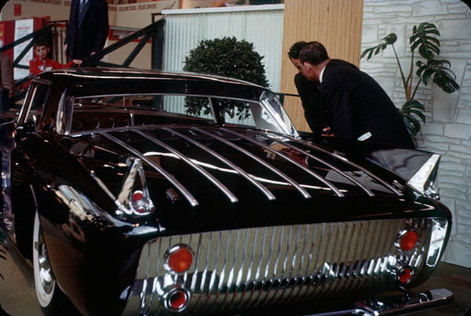 In the two years it was produced, the Gaylord Gladiator redefined what the automotive world expected from an American production car, in terms of luxury. With its swept-back, jet-age comportment, German build quality and upper-crust interior appointments of rare, highly polished from impoverished third-world colonies, the Gladiator caught many at the 1955 salon de Paris with their chinos down. 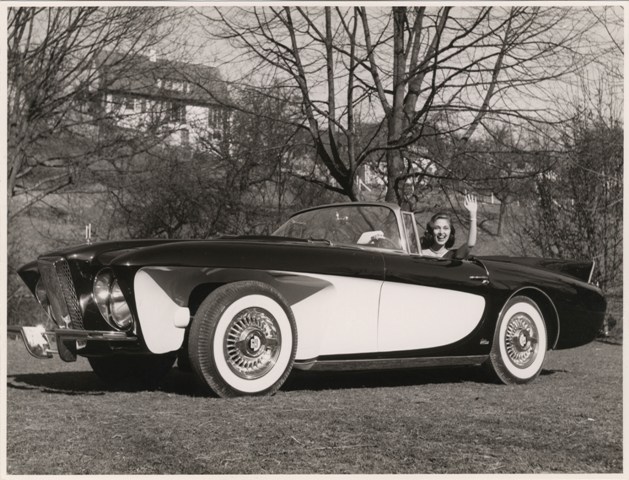 The 1955 Gaylord Sport Coupe was designed by Brooks Stevens for the Gaylord brothers. Both brothers, Ed and Jim Gaylord, inherited their father’s fortune which was derived from his famous ‘bobby pin’ invention. While growing up, both brothers drove Packards, Cadillacs, and Pierce-Arrow automobiles; however, both of them wanted something a bit more unique. Soon thereafter, they turned to Milwaukee designer, also known as classified businessman, engineer, and designer, Mr. Brooks Stevens. 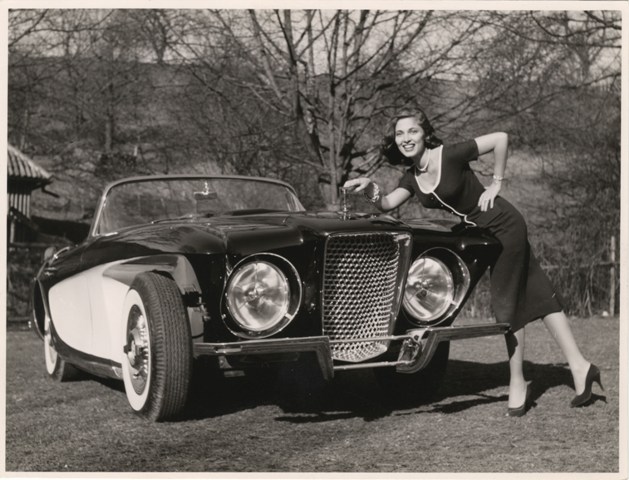 In 1935, Mr. Brooks Stevens served as chairman of his own firm known for designing products along with architecture and other automotive related projects. His name was well known among many automotive enthusiasts for his personal interest was invested in a variety of car clubs such as Antique Automobile Club of America and America Sports Club of America. His design of the Gaylord body is still remembered as one of the most wild and different designs ever created. 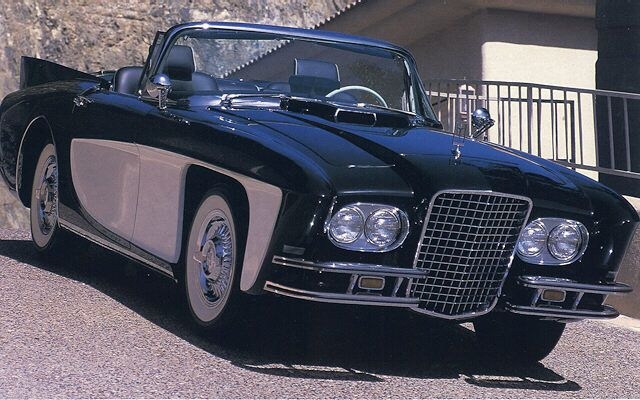 The Gaylord concept models were produced by Lufschiffbau Zeppelin in Freidreichshaven Germany and Spohn of Ravensburg. From 1955-56, there were two versions of the Gaylord that were designed and produced. Both models offered a shape classified as an ultra sports car design. The Gaylord body featured a long hood, short deck with tail-fins, and a wraparound windshield. The first Gaylord model used a Chrysler Hemi V-8 while the production models used a Cadillac 356 engine. Other engineering features included air conditioning, supercharger highway passing horn, emergency lamps over each wheel for necessary tire changes, tinted glass, and driver tonneau covers. The second version, known as the Gaylord Gladiator model, featured quad headlights and a retractable steel hardtop using only one electric motor. 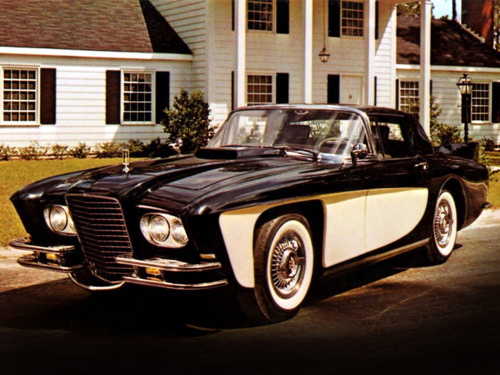 Mainly due to the overall design, the Gaylord concept model was not popular among the buying public. Even the Gaylord brothers who contracted the firm were dissatisfied with its workmanship which eventually led to a long legal battle. In 1955, the Gaylord brothers desired a retail price of $17,000, which at the time was extremely high compared to the new Ford Lincoln Continental costing $10,000. 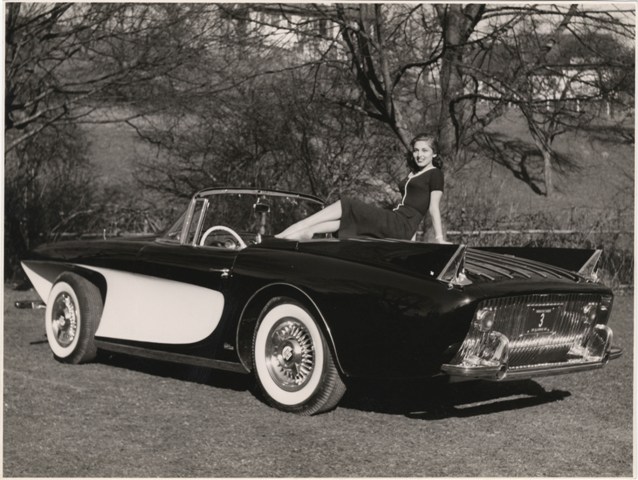 It is rumored that only 3 of the 25 Gaylord’s needed for the upstart company to survive were ever produced. Of the models produced, only two have survived and their whereabouts today are unknown. Nowadays, the Gaylord concept model will always be a mystery among automotive enthusiasts. 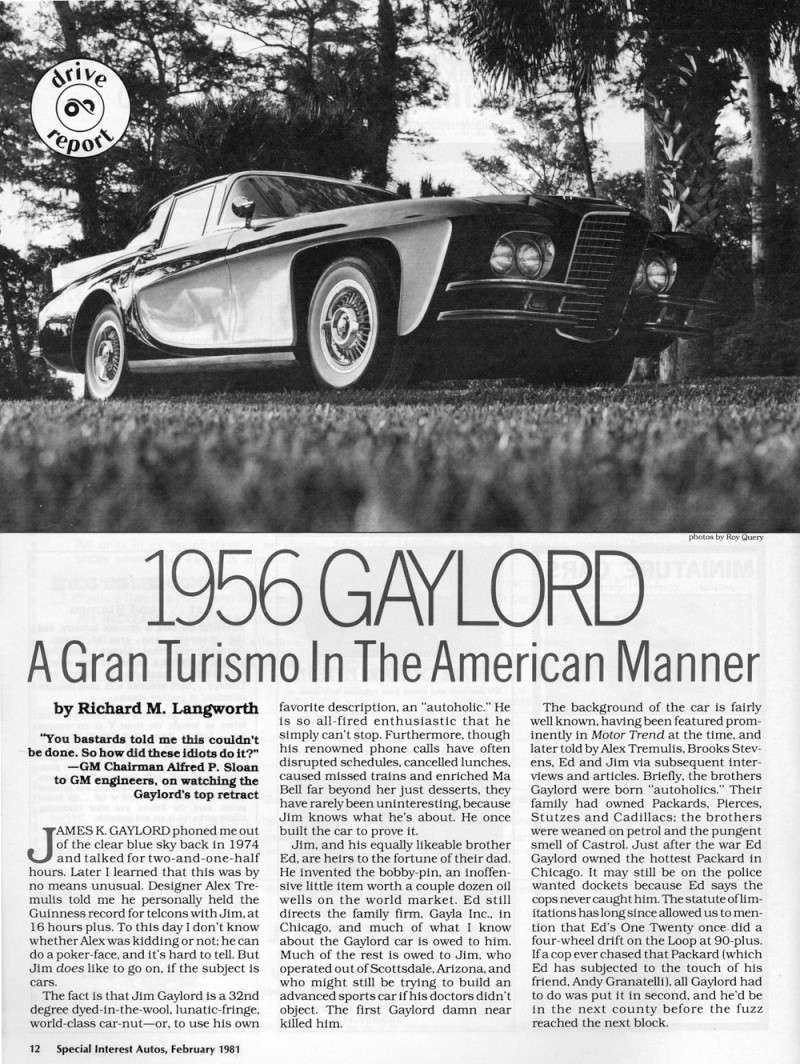 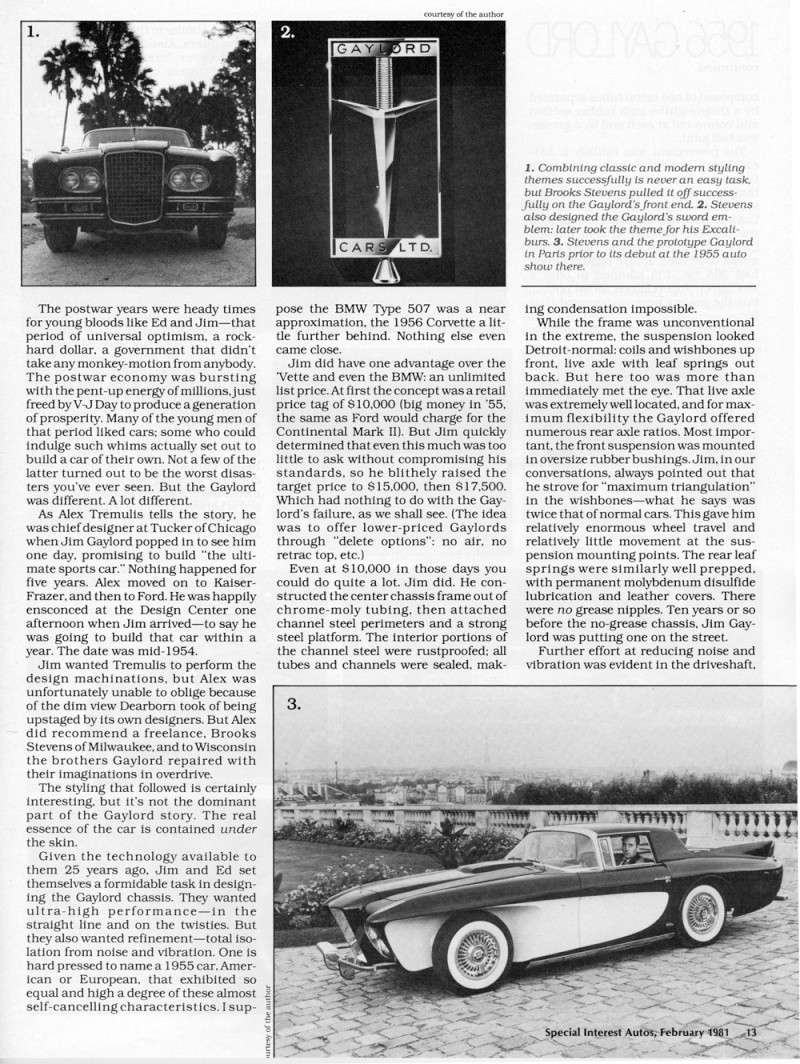 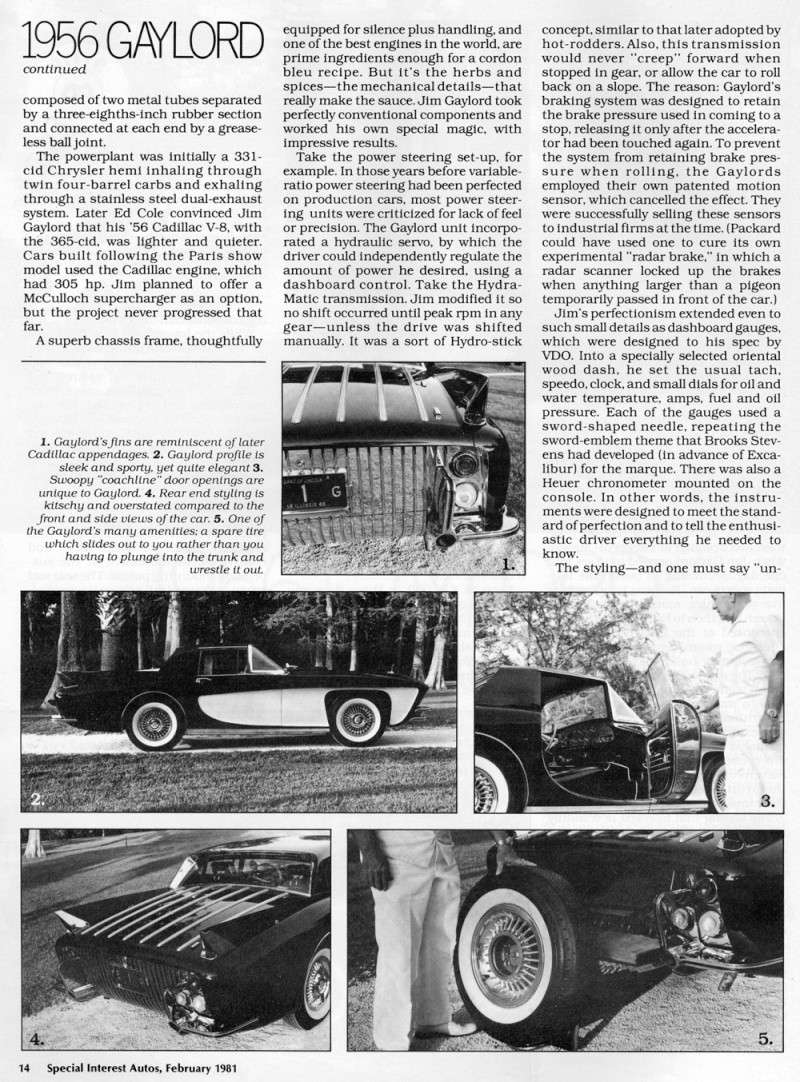 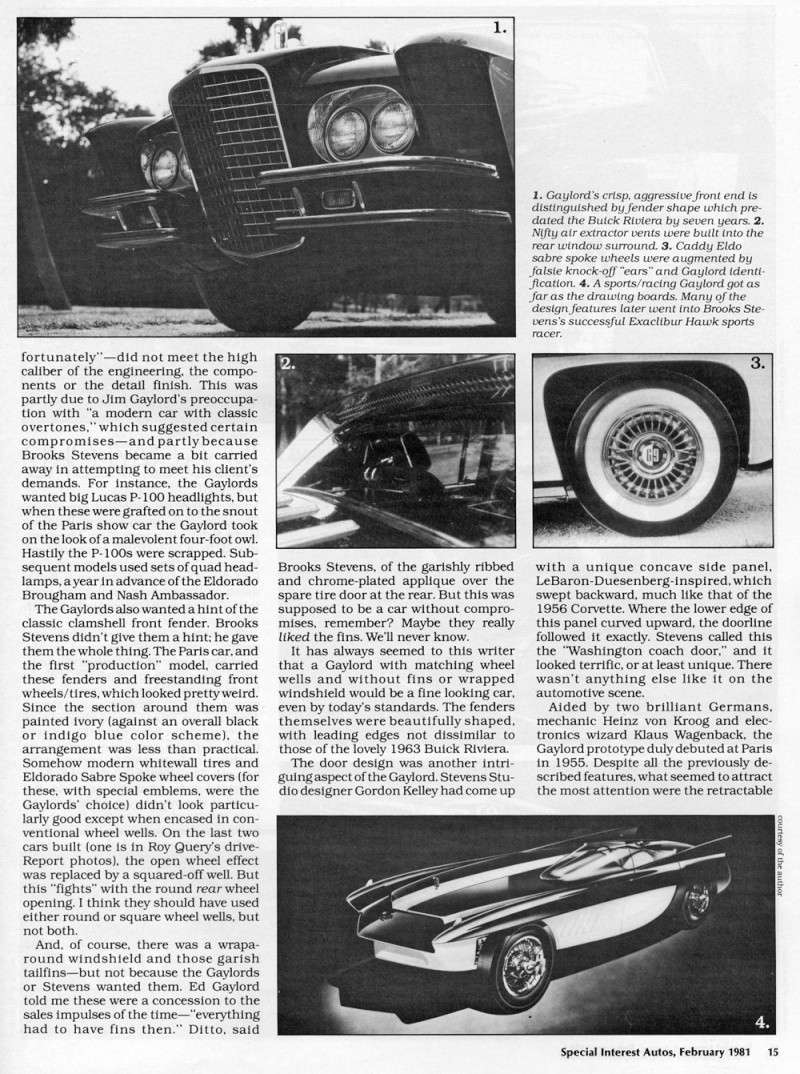 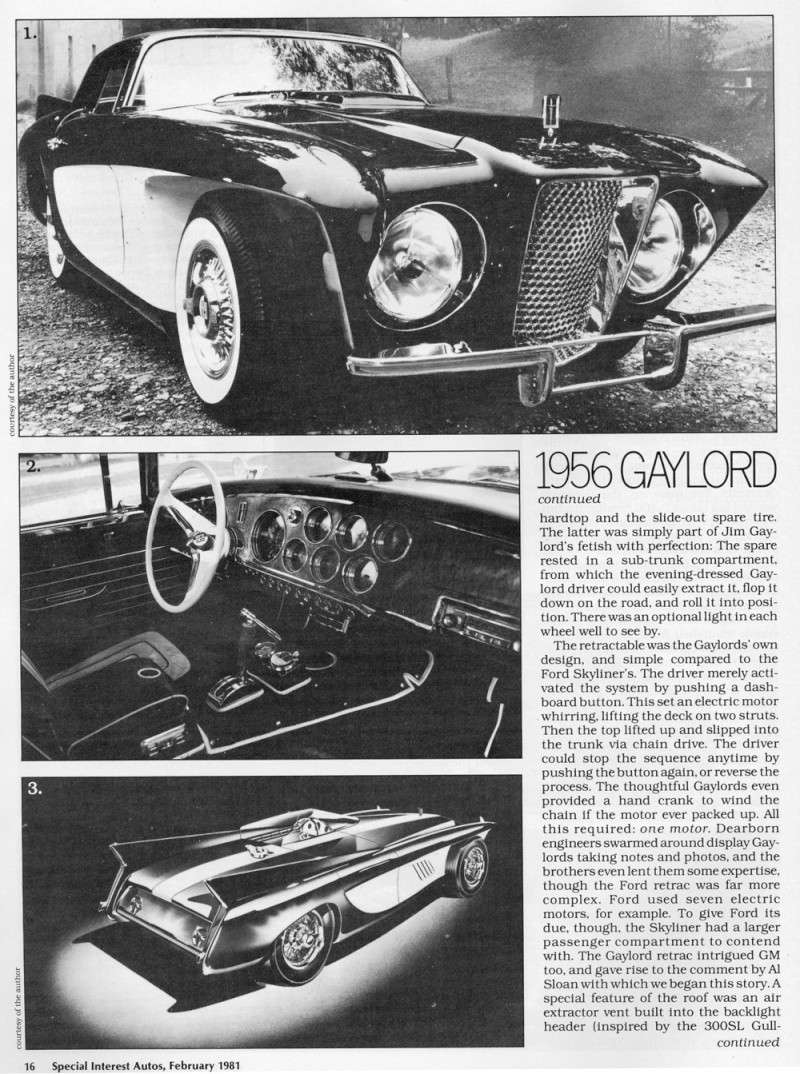 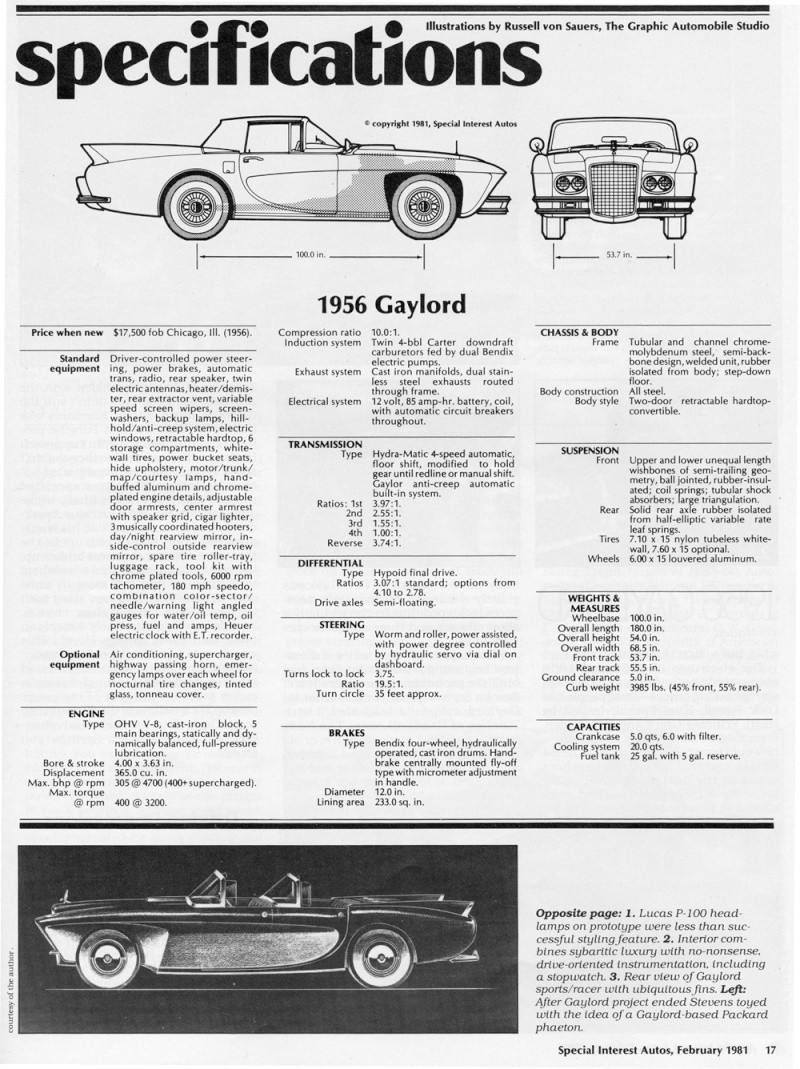 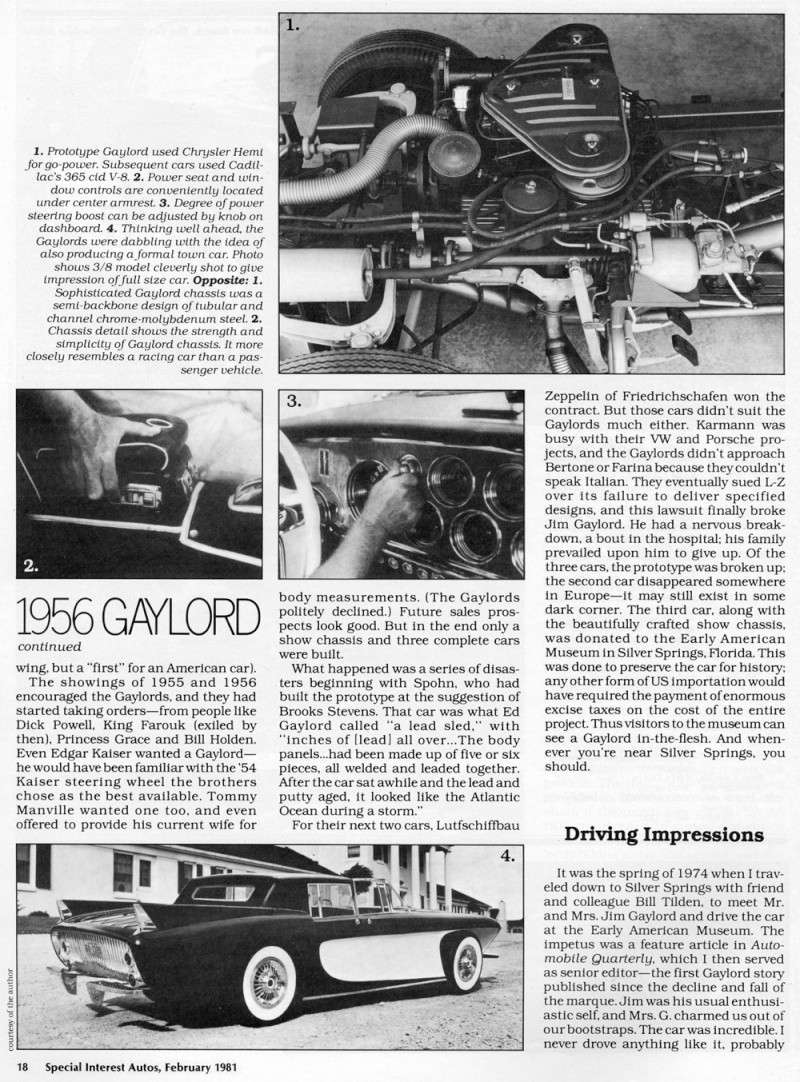 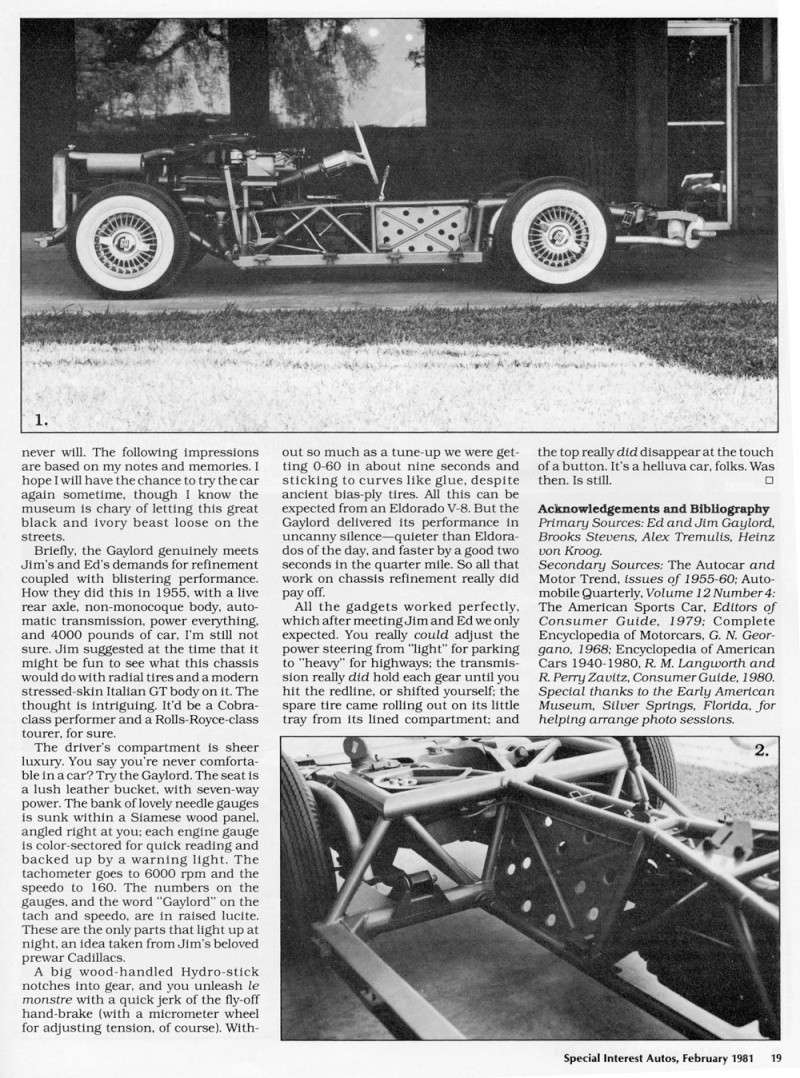 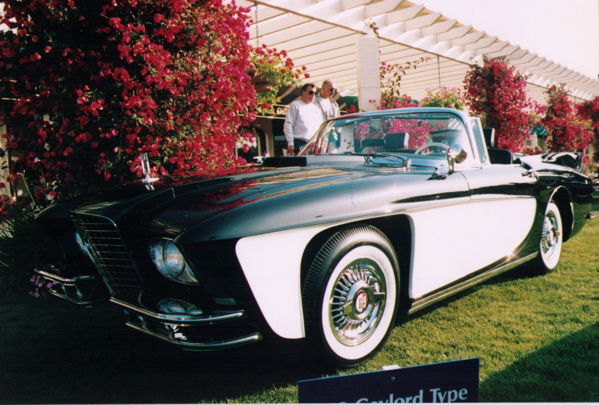