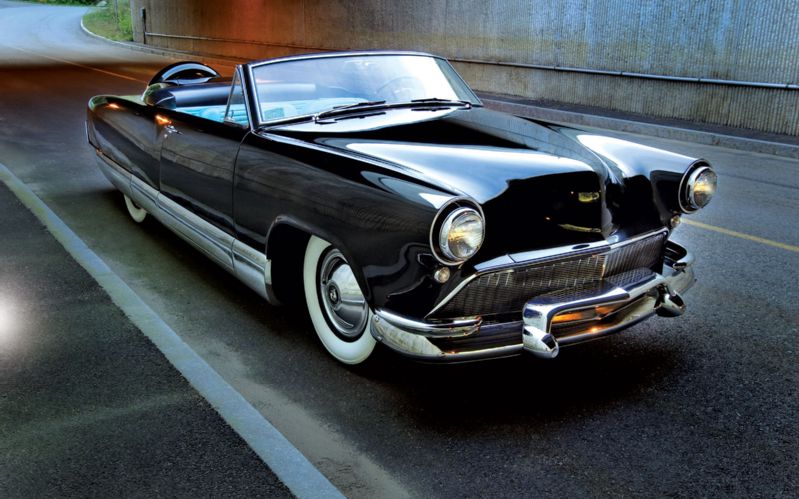 STYLE. Countless hot rods have been built in chicken coops over the years. However, few are as sleek or as beautifully constructed as the '50s dreamboat you see here. Clearly, this was no ordinary chicken coop, and Arthur Bentas is no ordinary farmer. A genuine Yankee craftsman, he fabricated the Raven over a nine-year stretch, largely from scratch. The Chelmsford, Massachusetts, chicken coop was the same, special place wherein Arthur and his brother operated the Bentas Bros. Co., makers of the Kavalla Kart, a well-known machine in New England and elsewhere during the huge karting fad of the late '50s and early '60s. 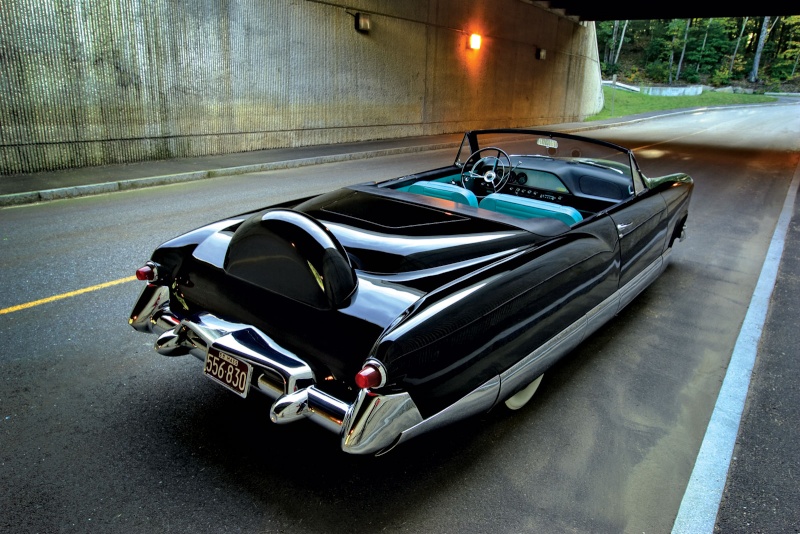 Starting this project in 1950, Arthur based the Raven on a '39 Dodge chassis salvaged from the family farm's scrap heap. (The car had been rolled years earlier.) The L-head six came from a new-model '50 Dodge, as did the rest of the drivetrain, including a three-speed manual gearbox. Arthur designed his own straight-pattern, column-shift linkage, while the hydraulic-clutch setup was assembled using a slave cylinder from a North American P-51 Mustang. Over this framework, Arthur fabricated his two-place body, splicing together Kaiser, Chevy and LaSalle panel sections with a good bit of his own, handformed sheetmetal. Except for the dashpanel and one-piece, lift-off top, which Arthur molded in fiberglass, the Raven is real steel. 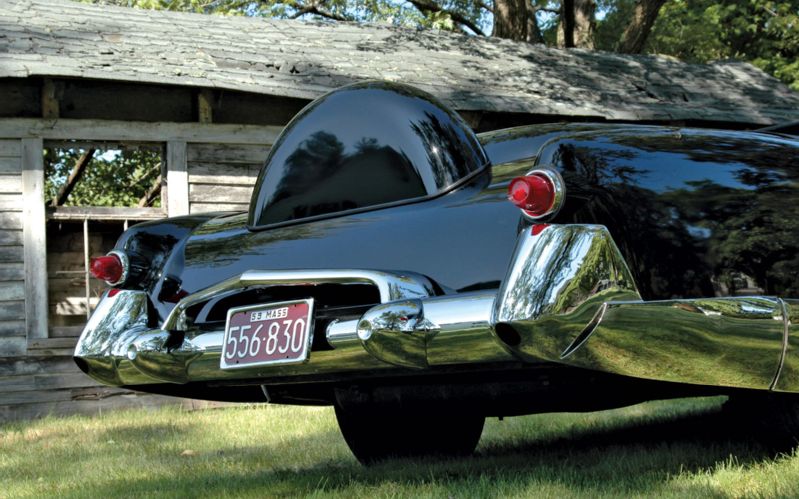 Sports cars were a brief trend on the kustom-show scene in the late '50s, usually employing fiberglass kit bodies like those from Almquist and Devin. All-steel cars were rare, especially coachbuilder-quality efforts like this one. The Raven was featured in HOT ROD in the Nov. '59 issue and in the Mar. '60 issue of Custom Cars, one of Petersen Publishing's pocket-sized "little magazine" titles. Arthur collected more than 25 First Place show trophies, including Best Custom at the '59 NHRA National Champion Custom Car Show. (Yes, NHRA took a brief stab at custom car show promotion.) That big event, held in support of the U.S. Nationals at nearby Detroit Dragway, was housed in the old Artillery Armory on 8 Mile Road. 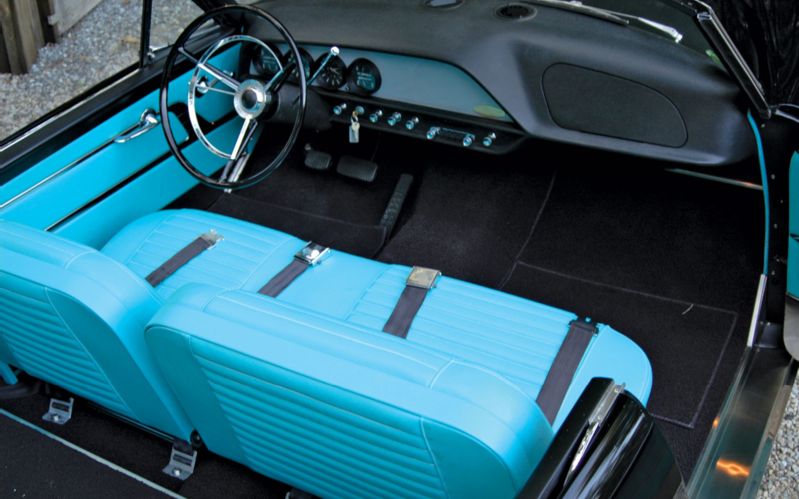 In 1961, Arthur reluctantly parked the Raven, a victim of defective plating: The chrome work on the handformed bumpers and rocker panels turned bad and, at the time, Arthur didn't have the money to have it redone. He always intended to go back and restore the Raven, but as so often happens, life got in the way as Arthur tended to his Honda motorcycle dealership and other pursuits. The story of the Raven might well have ended there if not for a 10-year-old kid named Joe Germann. You know how it is: We love most what we love first. Arthur and Joe's dad were best friends, and in 1959, the little gearhead got to take a ride in the Raven. It was only one ride, but he never forgot it. Today, grown-up Joe operates Motorhead Extraordinaire, a company that outfits collector garages and pro shops with premium cabinets and fixtures. He's also done some cars of his own, including a vintage Falcon Funny Car. But he always kept one eye on the Raven. Over the years, he and Arthur often talked about restoring the car. One day in 2007, Arthur, now in his eighties, said, "Joe, I want you to have the Raven." The car's new home was just a half-mile away. 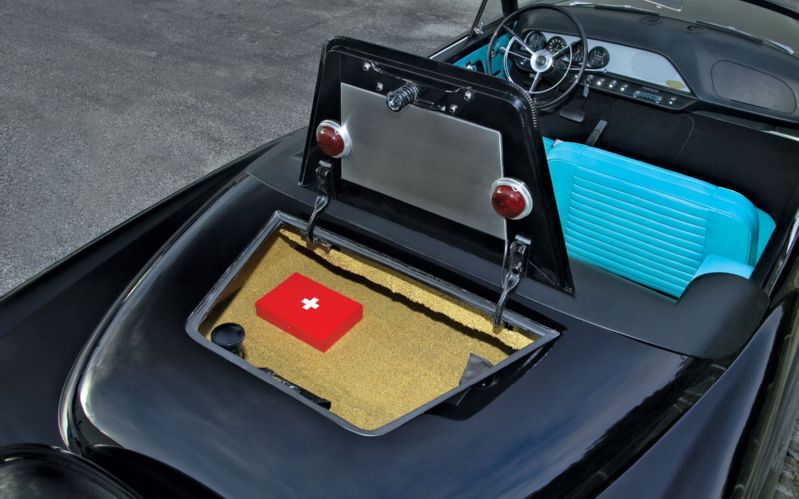 The subsequent restoration was relatively straightforward. Fortunately, the car had enjoyed a safe, dry nest for its 46-year nap and was complete and largely intact. Of course, all of the chrome had to be replated. Two cylinders were eaten away by rust, so the engine was replaced with another Dodge six. Joe completed the car in time for a return trip to Detroit for the '09 Autorama, where the Raven won First in class. Here, Joe also unveiled the restored Raven to Arthur, giving them both a thrill. "Since then, we've been putting a few miles on the Raven, taking Arthur for rides and to a few local shows," Joe says. "Imagine, I get to drive Arthur in the same car he gave me that ride in, 50 years ago. How cool is that?" 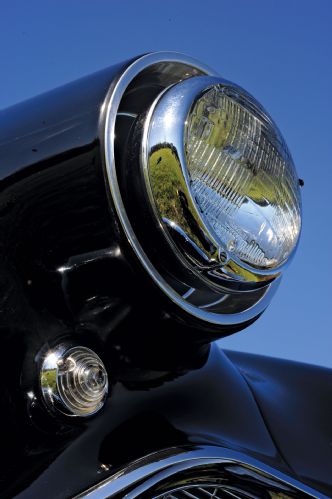 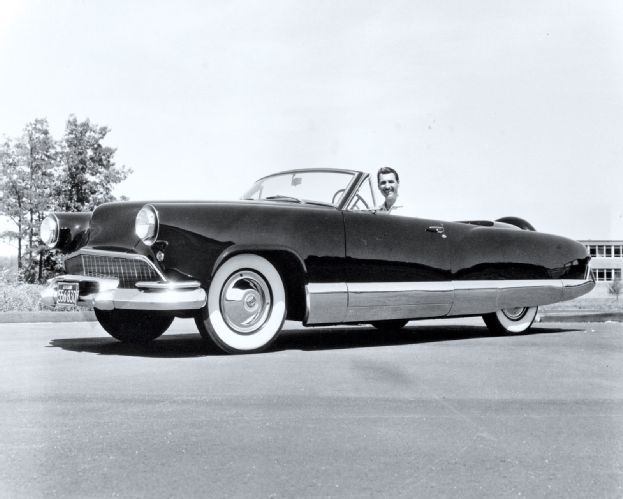 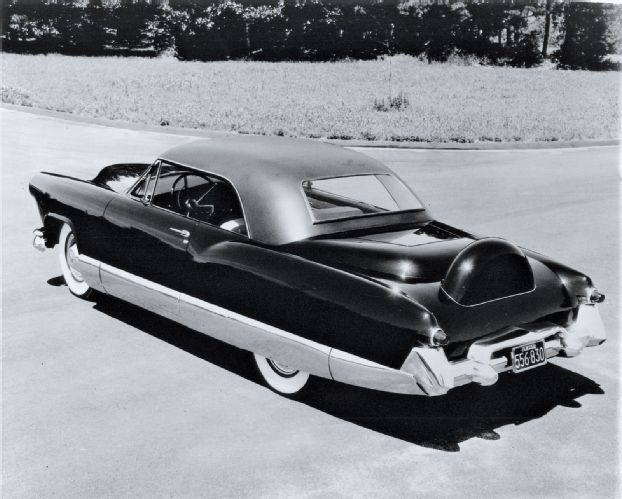 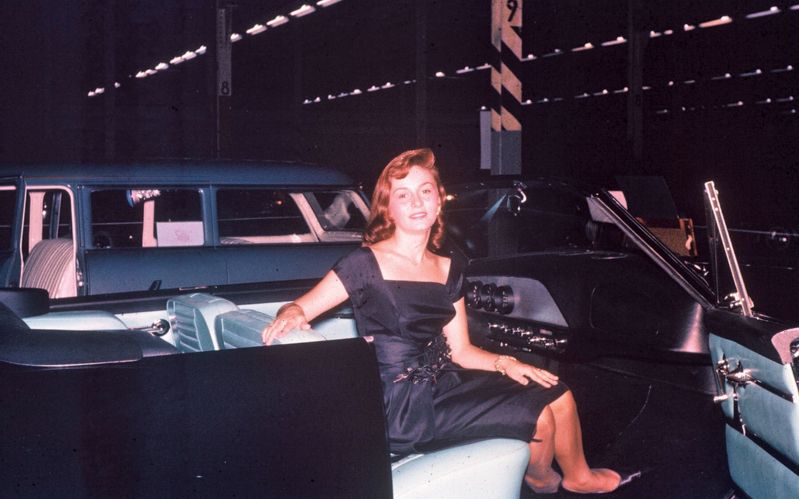 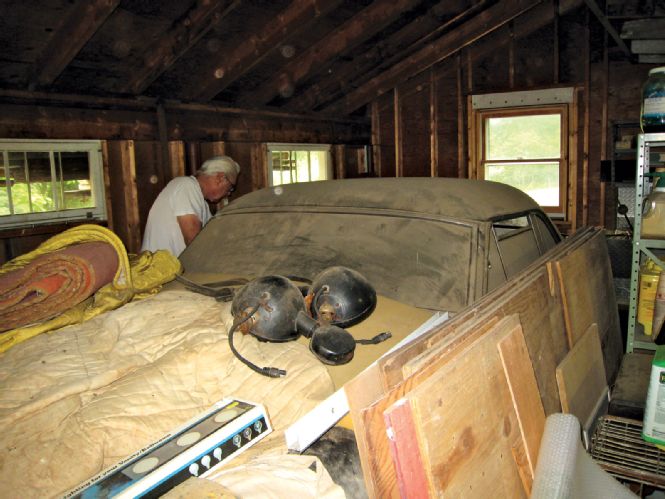 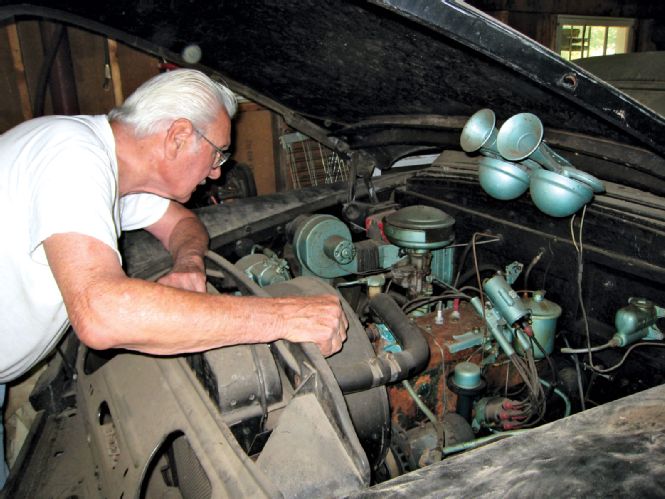 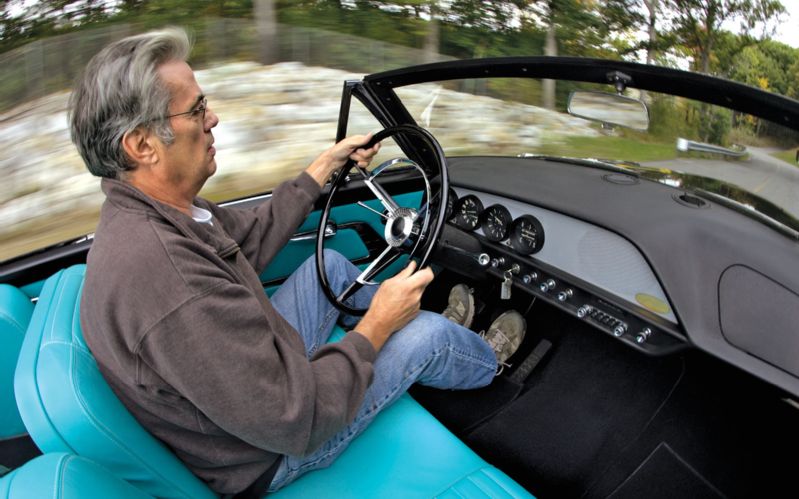 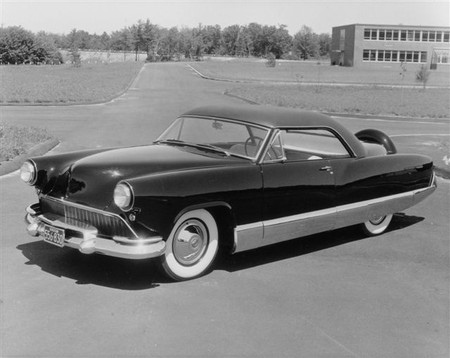 The Raven is an east coast custom car designed and built by Arthur Bentas of Chelmsford, Massachusetts in the 1950s. Arthur built the car from scratch in an old chicken coupe. The build started with a 1939 Dodge chassis with a 6 cylinder L-head engine. Arthur hand made the cowl section, floors, wheel wells, and inner panels for the car.[1] The front fenders, hood, and doors were modified 1954 Kaiser parts, the windshield was a trimmed Dodge windshield.[2] Arthur channeled the body 2 1/2 inches over the Dodge frame. The trunk was made from a modified 1952 Chevrolet hood fit with a LaSalle tire cover, and hand rolled steel. The chromed rocker panels and window frames were hand made.[1] According to Custom Cars March 1960, the taillight rings were from a 1950 Pontiac, and the taillight lenses were from a 1956 DeSoto.[2] The rear bumper was borrowed from a Kaiser. Dual exhaust was routed through the bumper. Up front the Raven featured custom fabricated floating headlights. The hardtop and dashboard was made hand made by Arthur out of fiberglass. Studebaker dash gauges were wrapped in custom made bezels.[1] The interior was upholstered in turquoise top grain leather stitched in rolls and pleats style. The upholstery was done by Dick Burgeron of Powell, Massachusetts.[2] The car was powered by the original flathead six engine. Arthur planned to install a Mopar V-8, but that never happened. Once the bodywork was done, the car was finished in Ditzler DDL-9200 Double Deep Black Lacquer. Once completed, the car had taken nine years to build.[1] 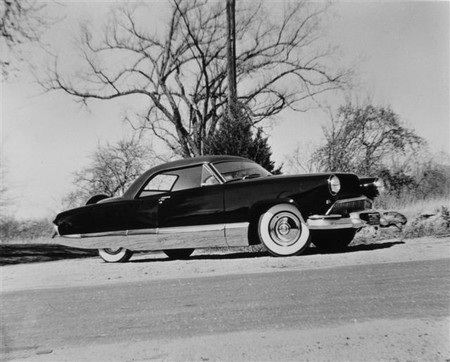 In 1959 the Raven won the Best Custom award at the NHRA National Championship Custom Car Show in Detroit, Michigan. During 1959 and 1960 Arthur won more than 25 awards with the Raven. In 1961 he put the car on blocks, and covered it in the back of his shop where it sat for 46 years. One of the reasons for Arthur putting the car away was due to failing chrome on the car. In May of 2007 Joe Germann, son of Arthur's best friend wokel the old kustom out of its long sleep. Joe's first encounter with the Raven was in the summer of 1959. He was 10 years old at the time, and was lucky enough to get a ride with his father, Arthur and Arthur's girlfriend in the Raven. After his father passed away in 1971, Joe kept in touch with Arthur, and stopped by him every now and then. During the 1990s Joe became more infatuated with the Raven, and Joe and Arthur would regularly talk about Arthur restoring it. Arthur always had good intentions, but other things always got in the way for restoring his old custom creation. In May of 2007 Arthur finally told Joe that he was ready to part with the Raven. Joe bought the car, and picked it up in July of 2007. When he picked it up the car was in a good "barn-find" condition, gentle deterioration, no critical parts missing, and no rot. However, a simple make-over was not going to do, it needed a full frame up restoration.[1] 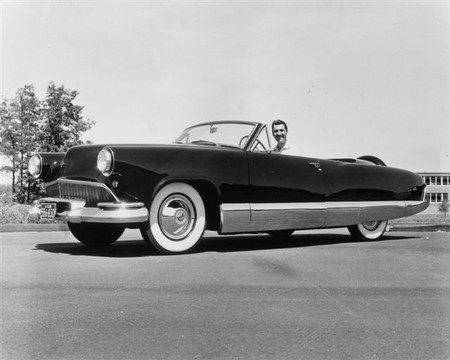 Due to another car restoration, Joe weren't able to start the restoration of the Raven until September 2008. Joe had committed to Arthur that he would bring the Raven back to Detroit in 2009 to celebrate it's 50th anniversary of winning the 1959 NHRA National Championship Custom Car Show Trophy. This meant that they only had 6 months to get the Raven restored. Joe and his team at Motorhead Extraordinaire thoroughly cleaned and painted the frame and installed all new brakes, brake and fuel lines, shocks, and wheel bearings. Water had rotted out several cylinder walls on the the original motor, so a replacement motor from a 1950 Dodge was found and rebuilt. The body was wet sanded, prepared, and repainted. No machines or plastic fillers were used in the body prep work. Arthur had 4 gallons of 50-year old Ditzler DDL-9200 double deep black paint stored away that the car was painted with.The interior was too hard and stiff to use, so leather died in Argentina, that matched the original color was used for the car. The interior was stitched exactly the same as the original. All of the chrome on the car was rechromed.[1] 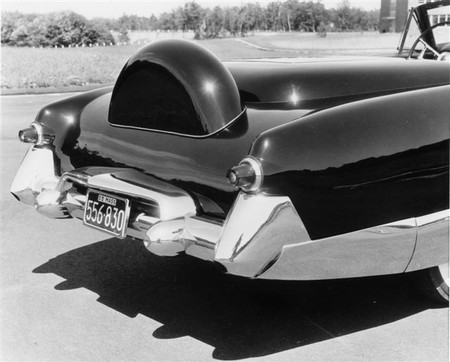 On March 6th, 2009, the restored version of the Raven was displayed at the Detroit Autorama. Arthur Bentas was present at the unveiling. At the show, the Raven won 1st place in the Radical Custom Convertible class. [1] 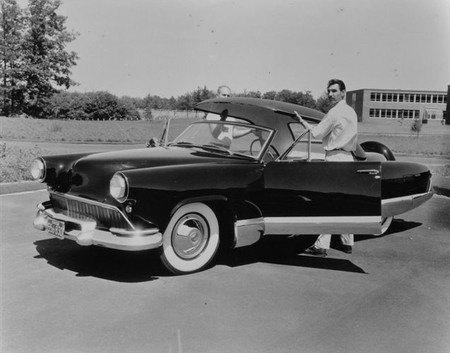 In 2010 the Raven was hand picked to be part of the prestigious Customs Then and Now exhibit at the 2011 Grand National Roadster Show in Pomona, California, an elite gathering of the most historically significant customs in the world. In August of 2012 the Raven will be competing in the Pebble Beach Concours d'Elegance, the world's premier celebration of the automobile. In 1997 the Pebble Beach Hot Rod Class was started. The Hot Rod Class has been featuring roadsters, coupes and pre-war customs in the past. The 2012 Hot Rod Class will be dedicated to Sport Customs and one offs such as the Norman Timbs' Buick Special, the 1950 Saturn, the 1947 Kurtis Omohundro, the Maverick sportster, the Coachcraft Special and Vince Gardner's 1947 Studebaker. 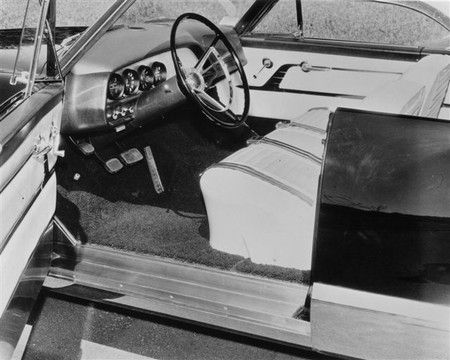 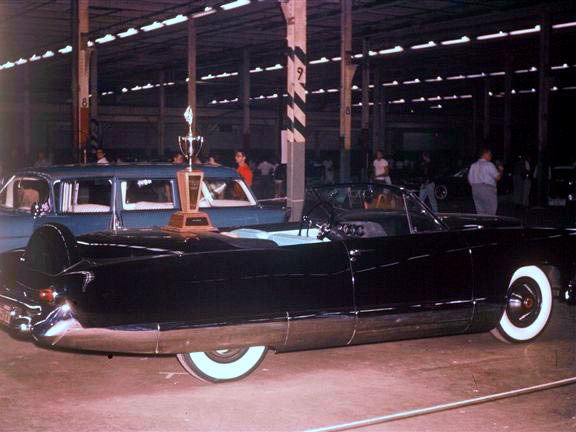 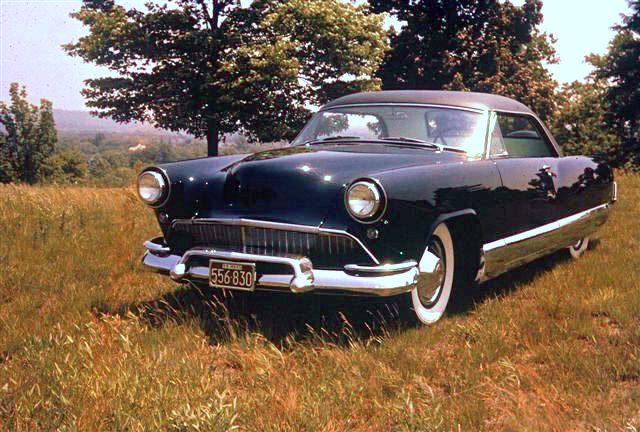 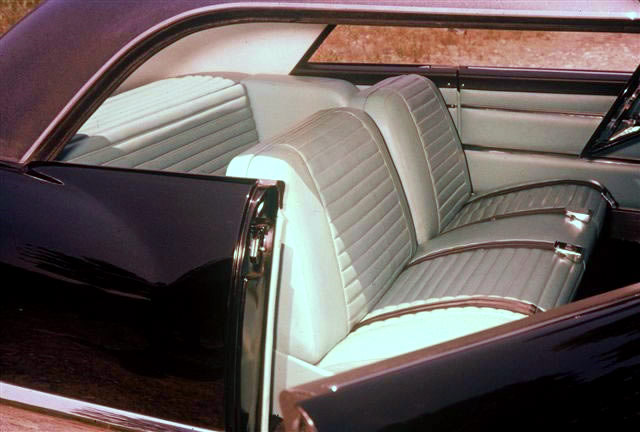 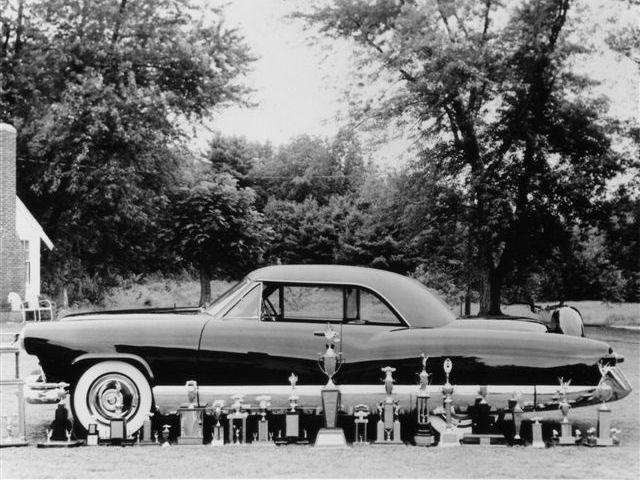 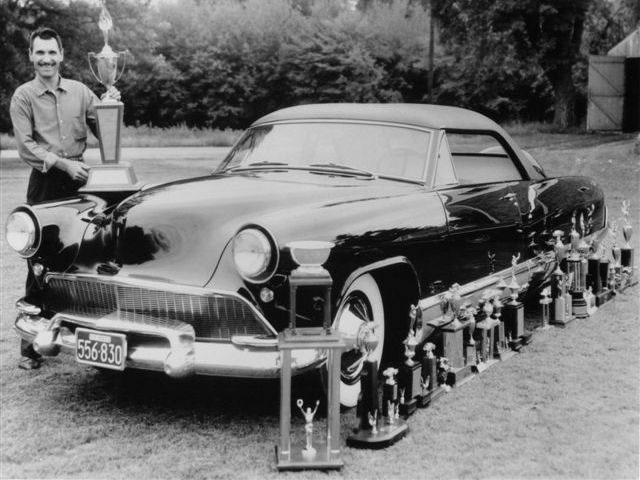 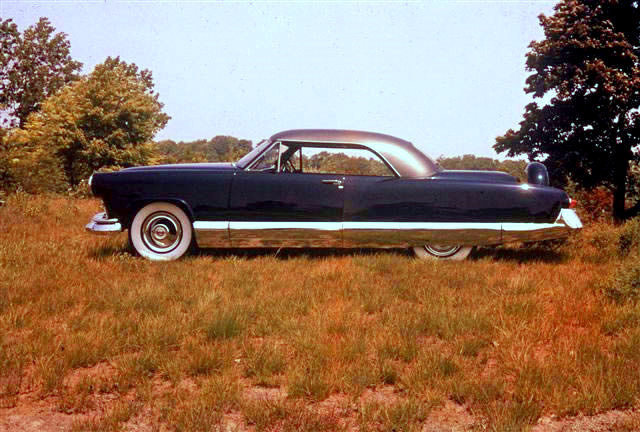 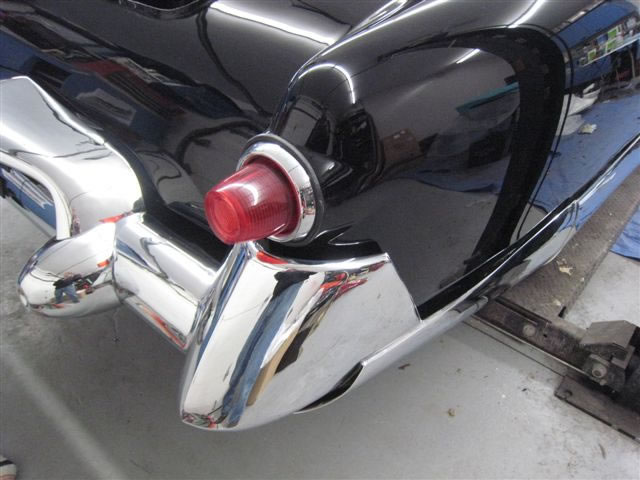 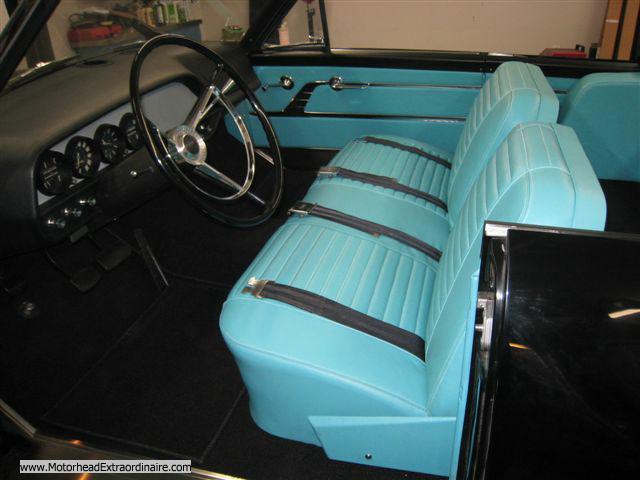 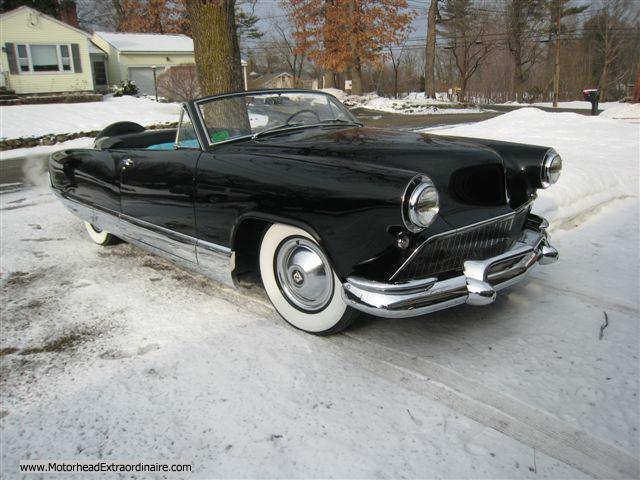 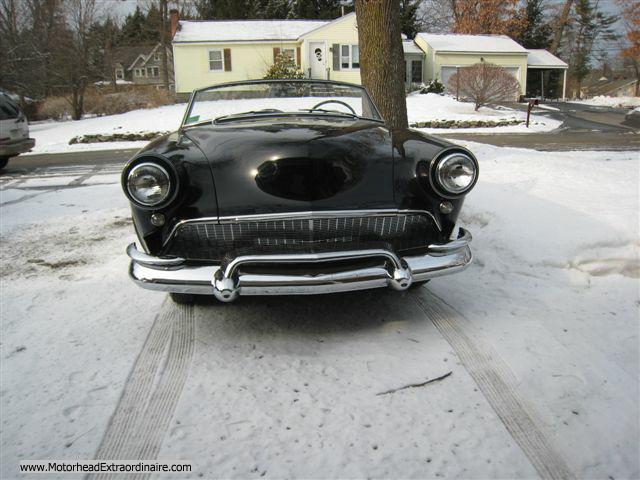 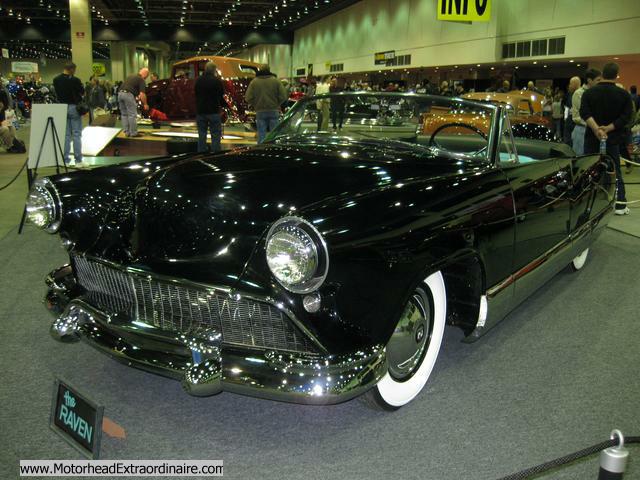 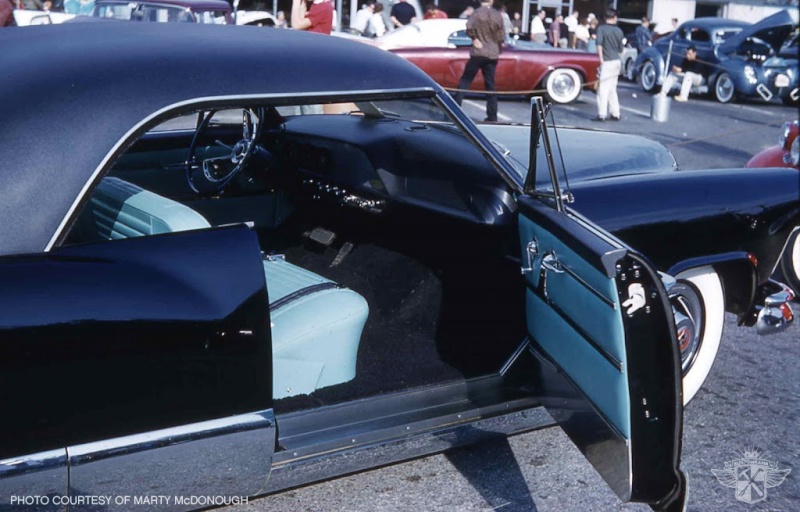