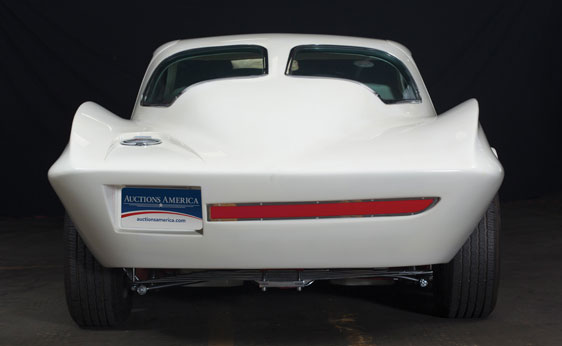 1963 Chevrolet Corvette owned and restyled by Ray Farhner of Farhner Custom Shop in Kansas City, Missouri. The car, known as "Outer Limits", was built from a wrecked split window coupe. It had less than 100 miles on it when it fell victim to a high speed crash in 1963. The car had hit a concrete bridge abutment head on at high speed. Tom Davison was there when it was delivered to Ray's shop on a flatbed truck, and he saw the shattered pieces of the car. Tom remembers that Ray paid $950 for the car, and spent 6 weeks creating the custom body and finishing up the repairs from the accident. Ray's Corvette had an asymmetrical theme, featuring offset twin grilles. The left one was fitted with two headlights, and right one received a hand formed louvered chrome grille. In addition to this, the front was stretched about six inches. The rear was also asymmetrically restyled, with a taillight on the right side, a recessed license plate on the left, and the fuel filler moved to the driver's side. The roof ridge was removed entirely. The wheel wells were radiused, and the top of the fenders heightened, arched 4 inches and finned outward. Structural work was done using steel rods and wire mesh overlaid with Fiberglas. THe door handles were shaved and replaced with electrical solenoids. The double hump dash was made asymmetrical with the interior done in pearl white ribbed leather. 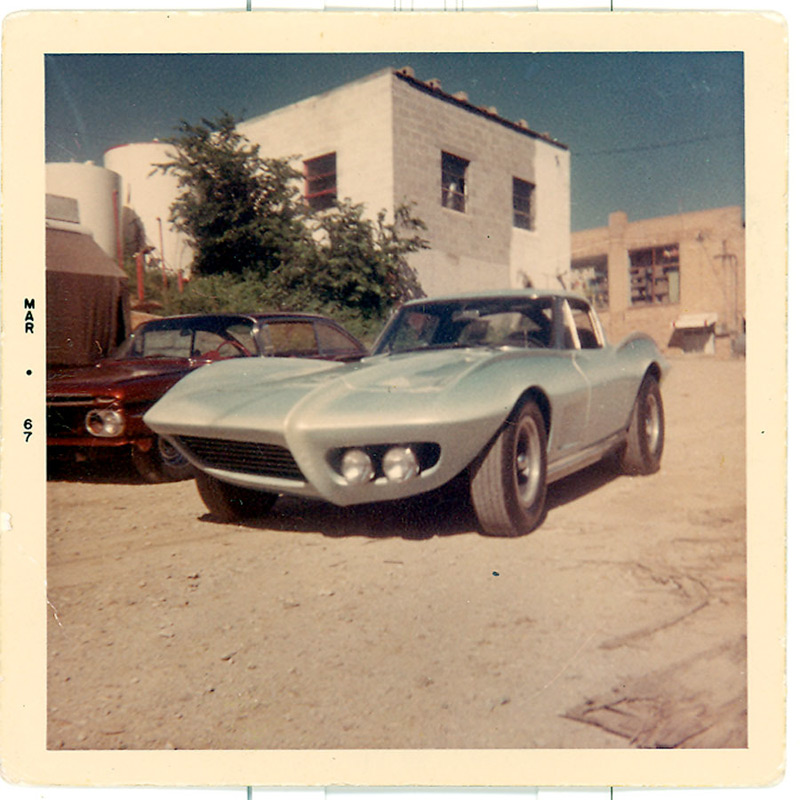 Tom Davison used to hang out at Ray's shop when he was 19 years old. Tom contributed ideas to the styling of the car when Ray was building it, and Ray even let him spray the first paint job, which was a light pearl blue with darker blends on the lower areas, under the raised fender-top peaks and then lighter pearl highlights on the upper portions, accenting the shape of the car. Tom remembers that it looked like one color sometimes. The build was completed in 1963, and Ray drove the Corvette all over the country in support of his car show business. It was also featured in Rod & Custom Magazine shortly after it was completed. Later on Ray painted the car Candy Red, before Tom gave it a green-gold candy fade paint job. Ray eventually sold the car. 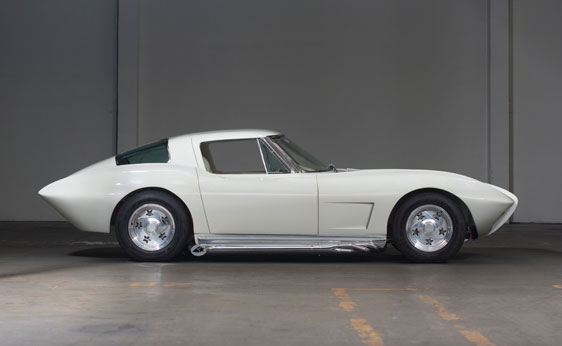 Ron Ortner, a show promoter from Hutchinson, Kansas bought the car in the mid 1960s. Ron was friends with Darryl Starbird, and he took the Corvette to the Star Kustom Shop in 1966 where he had Darryl paint it Candy Blue. Before Ron took the car to Darryl Starbird, he had someone install a 392 Hemi in the car. Darryl did also build a custom interior for the car that was done in diamond tuck pearl white. A photo of the Candy Blue version of the car shows it featuring a single headlight in the right grille. Tom Davison of Raytown, Missouri, who had helped Ray restyle and paint the car 5-6 years earlier bought the Corvette from Ortner in the spring of 1971. It was an impulse purchase for Tom, because Ortner only wanted $1000 for the car, a good deal Tom couldn't pass on. When Tom bought the car, the asymmetric hood and the Hemi engine were missing, and the frame had been butchered. After owning it for about a year, Tom realized that he didn't want to spend the money or effort it would take to get the car roadworthy, so he sold it to Ray Boyles just to get his money out of it. Ray operated a Corvette repair/sales company in Raytown.[ 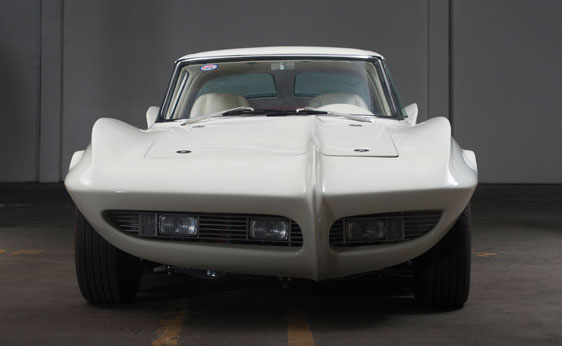 Gary Logan of Independence, Missouri found the car in pieces and purchased it in 1979. After researching the car's history he decided to rebuild Outer Limits like Farhner had designed it, and maintain the asymmetrical styling. The car was stripped to a bare shell and rebuilt frame up. Randy Logan, of Grain Valley Auto Body in Grain Valley, Missouri, performed the restoration of the body, and all Fiberglass work. Gary built the engineusing a studded 350 4 bolt main Chevy block, 7.5:1 TRW L2441F blower pistons and a single TO4 Air Research turbocharger. Heads were O-ringed and hold 2.02 valves with triple springs. A Muncie M21 4 speed transmission provided the power transfer. The interior was restored to the original spooky coffin look with pearl white diamond tuck, including the headliner. Once completed, the car was shown at the Car Craft Street Machine Nationals. 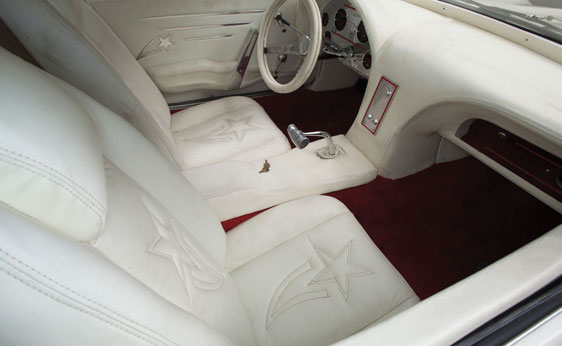 Gary sold the car in the 1980s to another owner, that made further changes to the car. The round headlights were changed to rectangle ones with additional lights added into the grill side. Side pipes were added, and a shooting star kind of theme replaced the period diamond tuck. The turbo charger was removed, and the hoop were opened using a screw gear mechanism. Eventually, the old show car wound up as the property of Robert Peterson of the Peterson Museum. 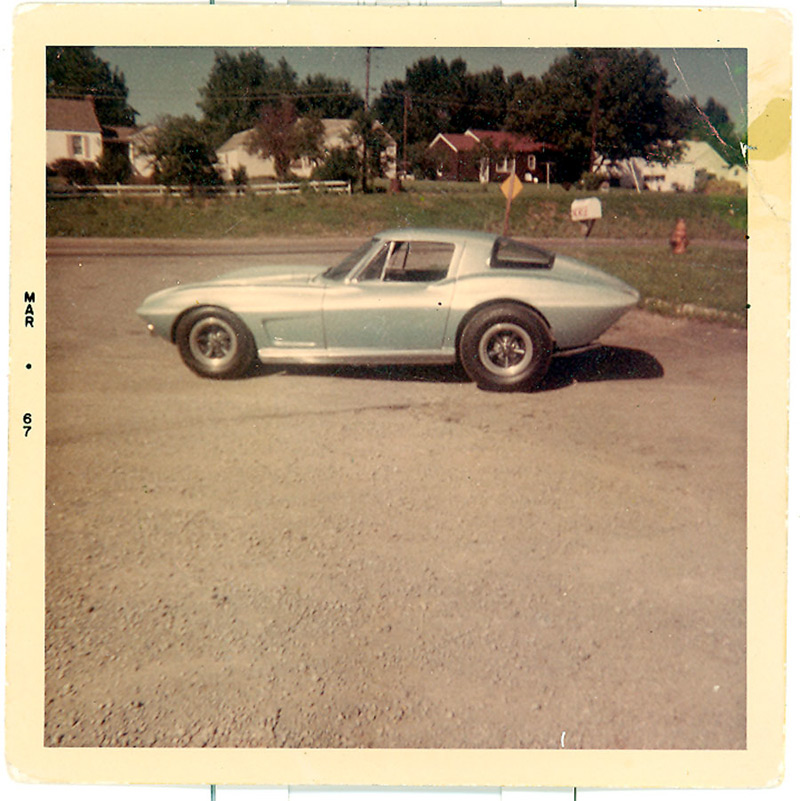 August 1-3, 2013 Outer Limits was sold at the Auctions of America California Collector Car Auction in Burbank, California. At the time, it featured a white paint and a matching leather interior. Inside it featured a custom instrument panel with electronic gauges, a Hurst shifter and a red carpet on the floor. The sales price was $ 47,850 USD 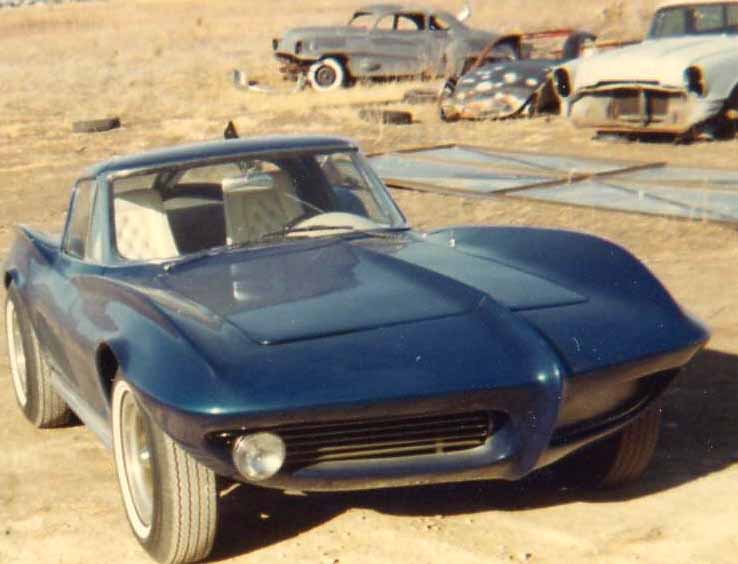 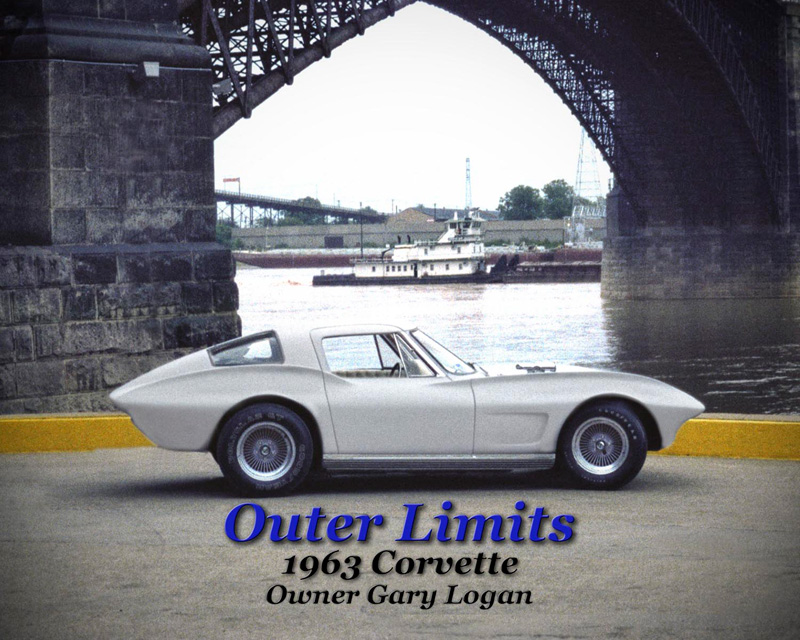 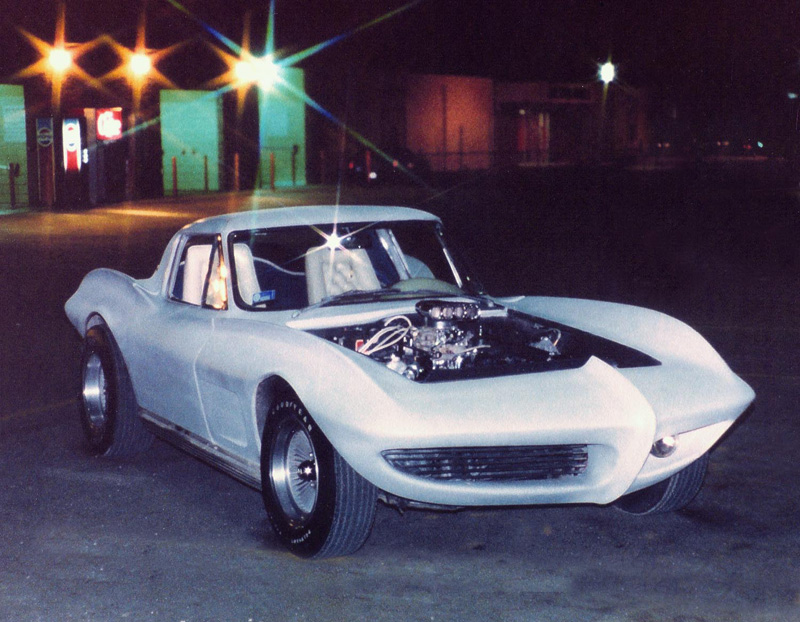 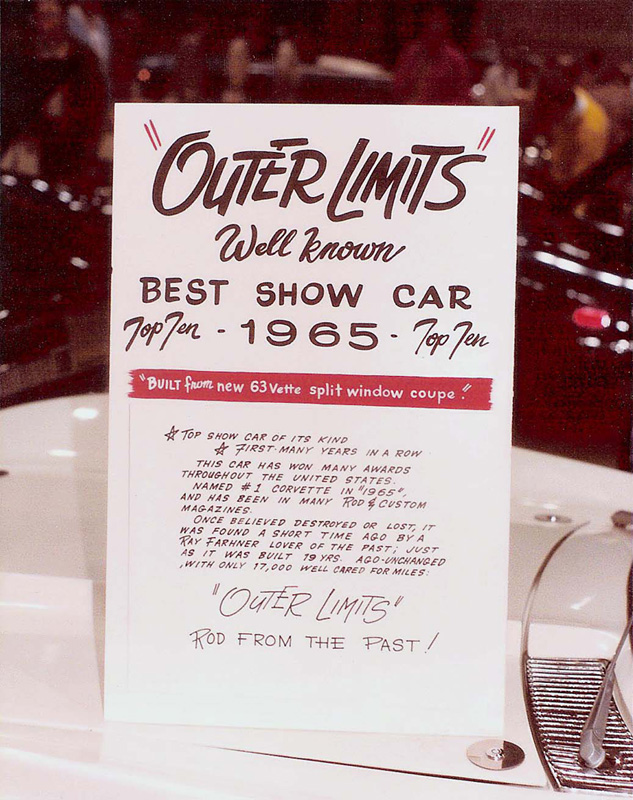 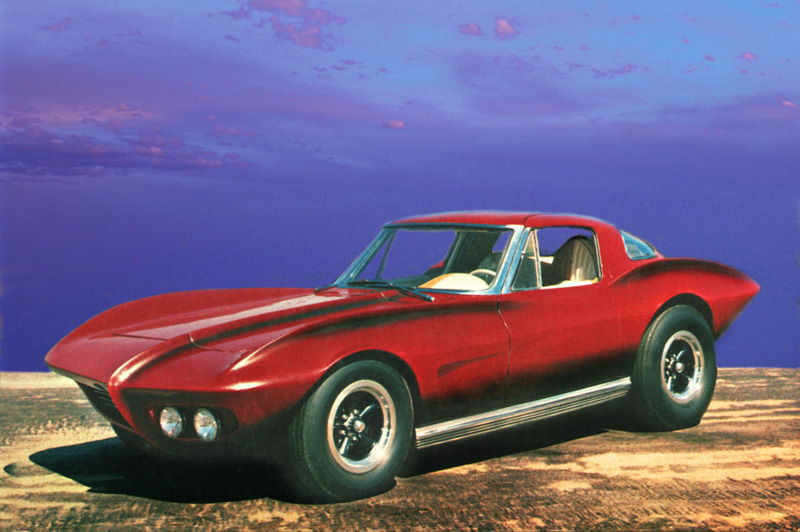 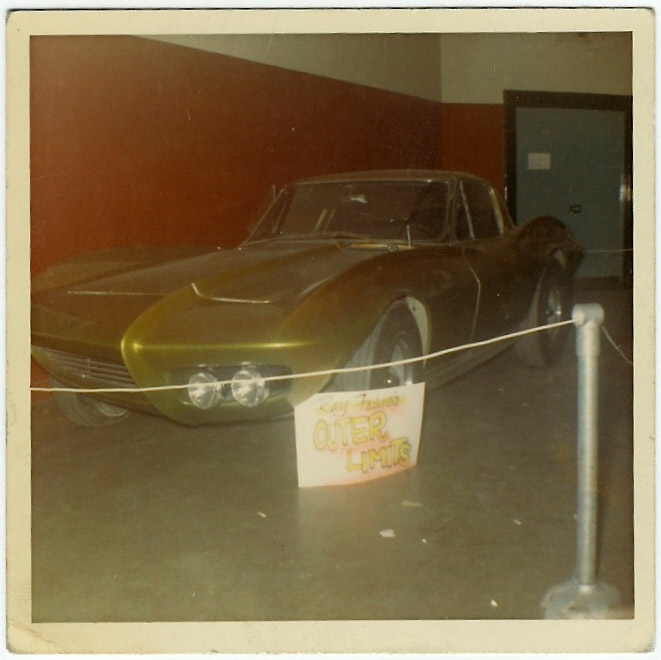 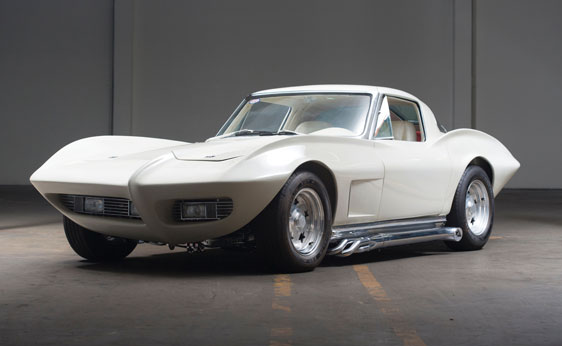 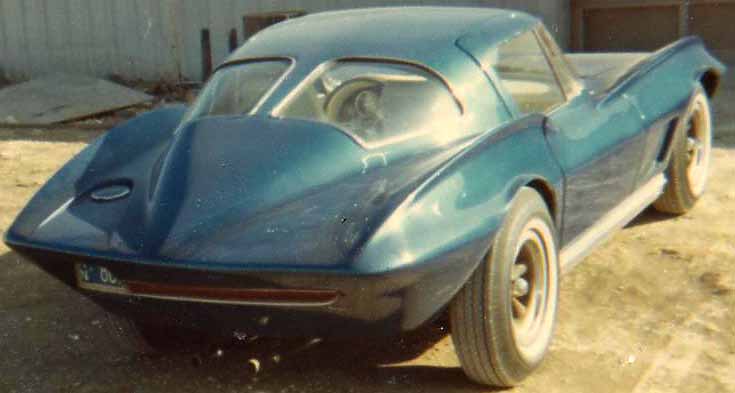