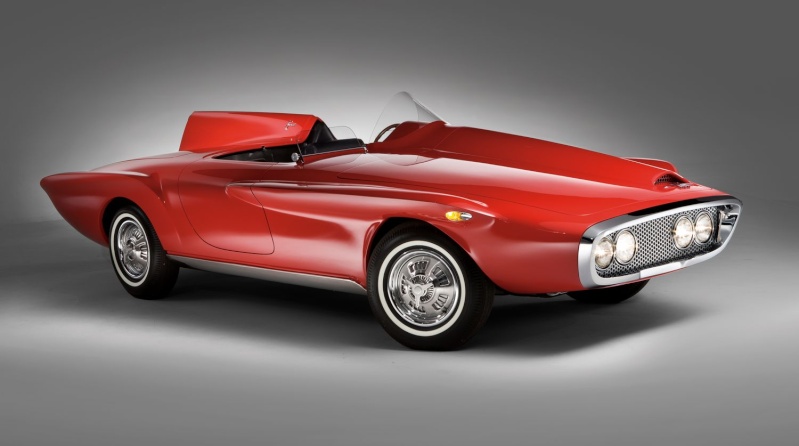 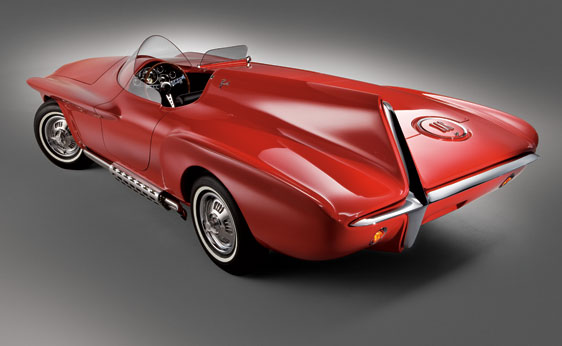 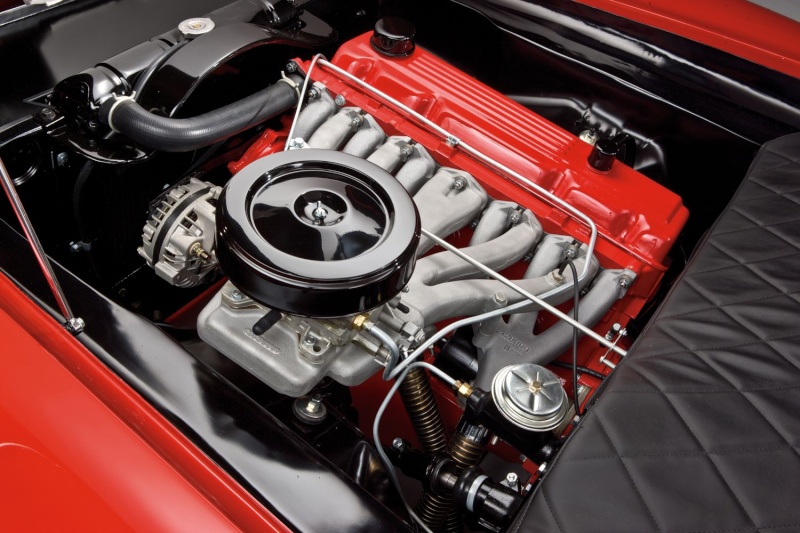 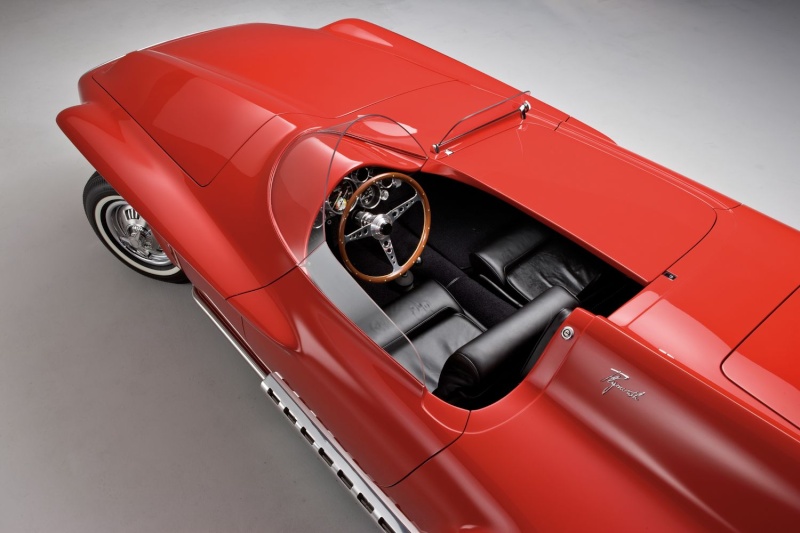 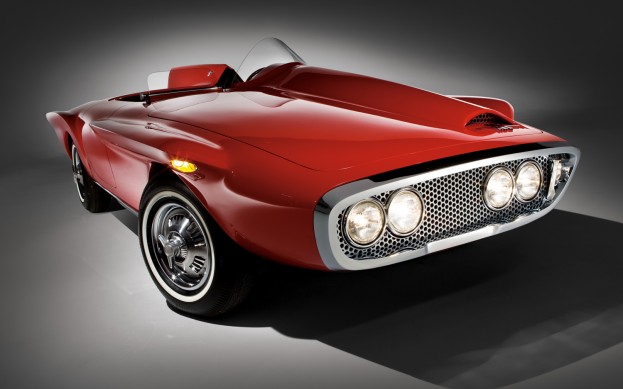 When Chrysler’s sales stalled, Keller astutely hired a styling genius, Virgil Exner, and gave him a relatively free hand. Features from Exner’s stunning show cars morphed into Chrysler production cars. A sneak preview of the new 1957 Mopars literally sent Bill Mitchell’s stylists scurrying back to their drawing boards. Plymouth’s advertising crowed, “Suddenly It’s 1960!” With dramatic fins and powerful Fury engine options, the ex-wallflower was primed to pass Ford and Chevy. Could the next step be a sports car? The answer wasn’t long in coming. 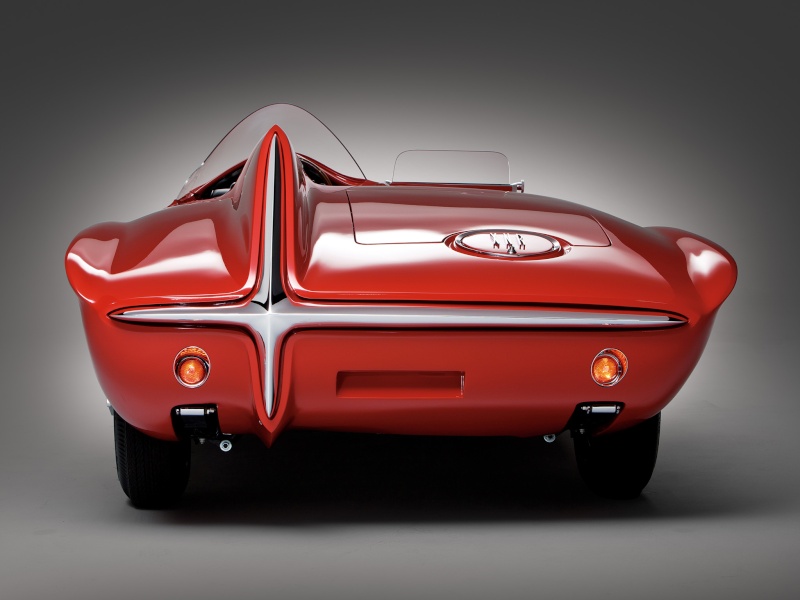 A sports roadster required a short chassis. The unit-body Valiant compact, shared by Plymouth Valiant and Dodge Lancer, was the obvious platform. Its high-revving 170 CID I-6, canted over at a 30 degree angle, could be tuned for 250 bhp. Buoyed by accolades for his earlier “idea cars,” Exner and his team devised a radical roadster. Road & Track felt the XNR significant enough to feature it as the May cover car as well. 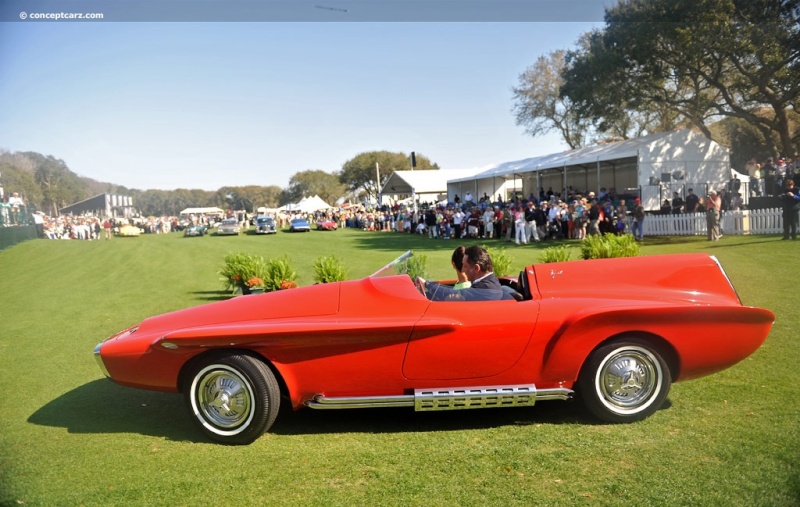 The XNR, named for the design chief himself, was built on a modified 106.5-inch Valiant chassis, with a dramatic, asymmetrical shape that polarized onlookers. A large, offset hood scoop led to an extended sculptured rise, which faired into the cowl and embraced a low, driver’s side curved windscreen, then flowed smoothly into a single offset tailfin. On the passenger side, a folding, Brooklands-style, flat windshield was accented by a snug-fitting, steel tonneau cover. 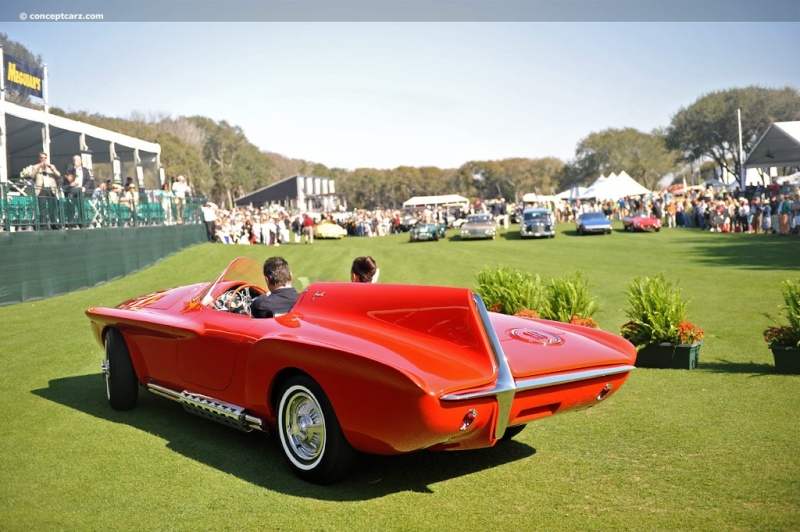 Virgil Exner Jr., later a successful designer himself, confirmed that his father had always wanted Chrysler to build a sporting two-seater. “He was a sports car enthusiast, and he yearned for an up-to-date personal roadster.” Inspired by a 1930s-era Studebaker two-man Indy car that he’d purchased when he worked in South Bend, “he wanted to do a modern version,” says Exner Jr. 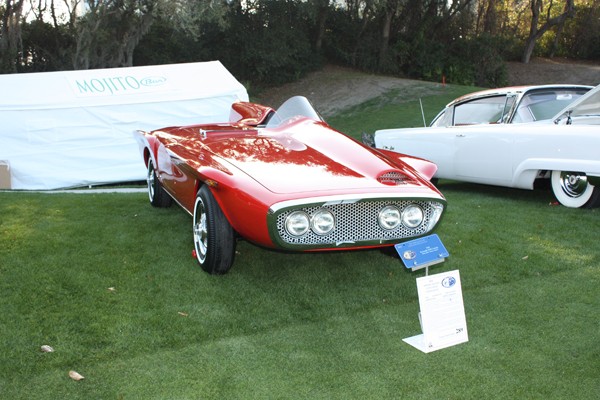 Virgil Sr. was also inspired by then-contemporary Indy cars like the ‘lay-down’ Watson Offy. The newly developed, slant six was the perfect engine for that application. Exner Jr. said his father “...loved the Jaguar D-Type,” so he incorporated a similar vertical fin. Initial sketches were done from 1958–1959, followed by a 3/8ths-scale clay model. After its upper portion was removed, a modified Valiant chassis was shipped overseas to Turin, where Carrozzeria Ghia’s craftsmen followed Chrysler design drawings, built an armature, and then hand-formed the XNR body entirely of steel. It is an important fact that the body is formed completely of steel, not fiberglass, as this was a dramatic departure of typical concept car fabrication and confirmed that this car was built to drive.

The visually stunning 1960 XNR left the aging Corvette for dead. A bold, extended nose, framed with a thin chrome surround, outlined a solid aluminum grille with holes drilled for cooling, and incorporated a set of then-popular quad headlights. In back, a vertical strip emerged from the tall fin, flowed under the lower deck, and tee-ed into another thin blade, forming a bold cross that served as a bumper. The XNR’s radical rear dramatically emphasized its asymmetrical theme. An eight-page Plymouth XNR promotional brochure read, “Functional, beautiful, unprecedented: the entire design is concentrated around the driver.” 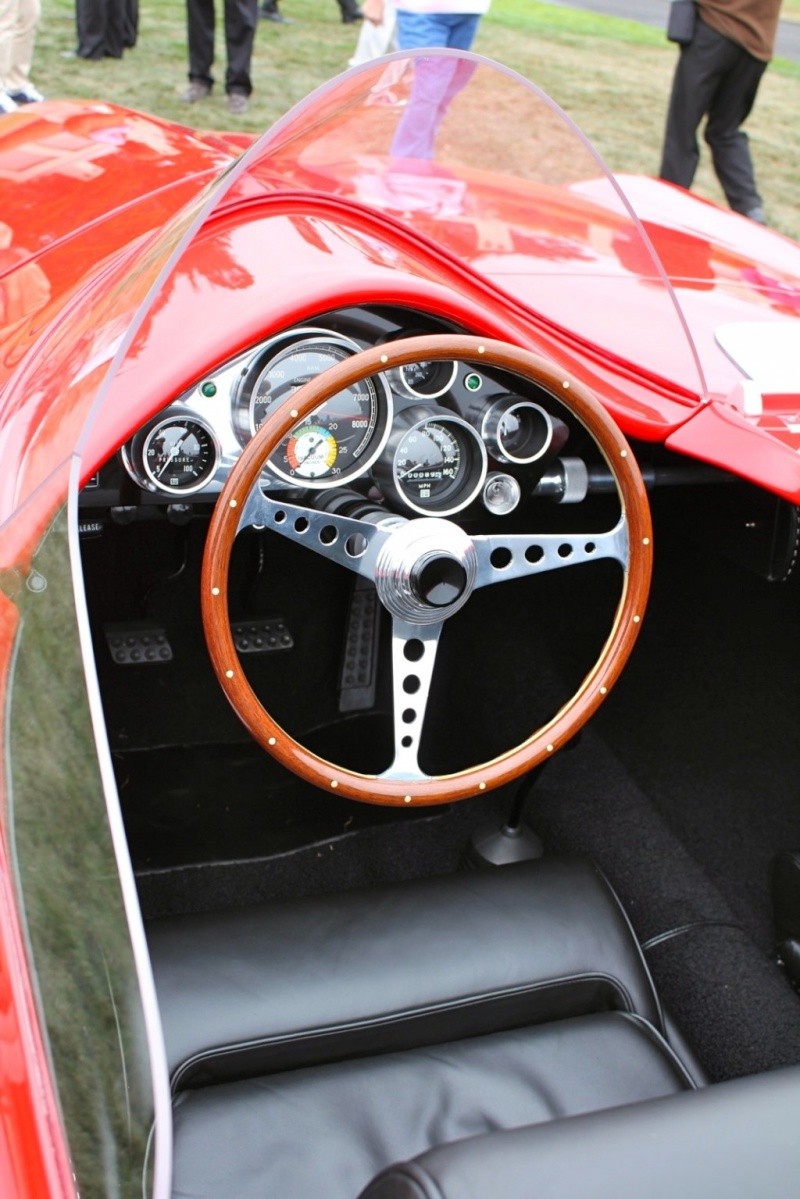 A slender reveal on each side was fronted by a small running light in an aircraft-inspired nacelle. Below the curved outline of a side fin, later adapted for the production Valiant’s rear quarters, was a fully radius-ed rear wheel opening. Fashionably thin whitewalls on 14-inch steel wheels were adorned with unique and very complex slotted hubcaps. Specifically cast headers direct exhaust to double external pipes on the left side, matching the powerful six cylinder with a distinctly raw sound. 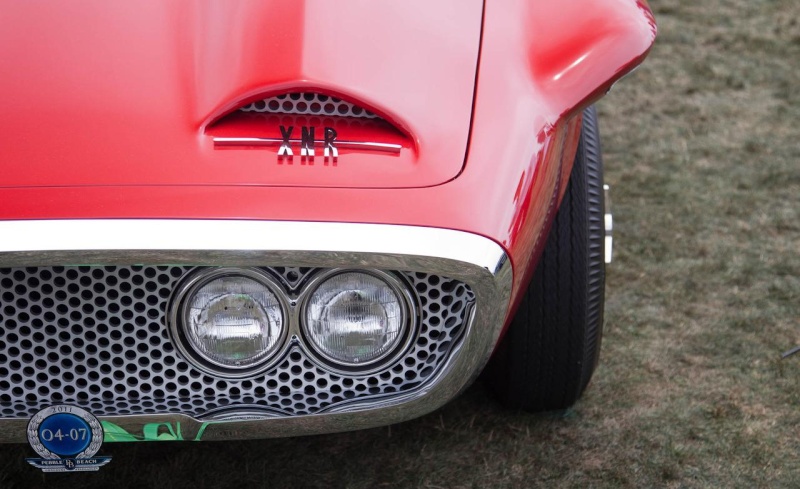 Barely 43-inches high, the low-slung two-seater was 195.2-inches long and 71-inches wide. Exner believed its prominent fin, besides being a visual treat, helped high-speed stability. He wanted the XNR to be capable of exceeding 150 mph. Initial tests at Chrysler’s high-speed proving ground in Romeo, Michigan resulted in a 146 mph clocking. Aided by a streamlined fiberglass nose cone, designed by Dick Burke, eventually helped the XNR top 152 mph. Exner, who had hit 143 mph earlier, while testing his namesake roadster, was reportedly pleased. 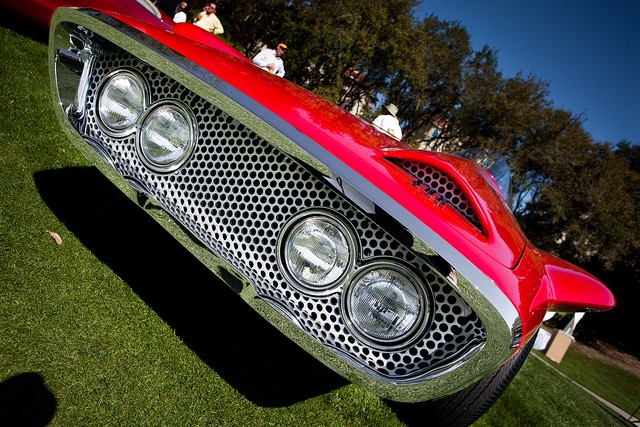 A period newsreel, shown nationwide, filmed the XNR roadster circling Chrysler’s test track on a wintry day. The announcer hinted that the “idea car” might see production. The lone XNR was fully functional, with a black leather interior, twin bucket seats, deep door cavities with zipper pockets, and a stowage area for luggage. Its passenger seat was positioned four-inches lower than the driver’s, and there was a padded headrest for the driver. Full instrumentation included an 8,000 rpm tachometer, which incorporated a vacuum gauge. Mr. Exner had an affinity for photography and incorporated his personal hobby into the instruments. The dials have individual, inverted lenses that mimic camera optics, and as shown in the advertising brochure, the glove box doubled as a removable camera case. A floor-mounted shifter in MT’s words, “...completed the picture of a fast, functional, fun car.”

The one and only prototype XNR began its extraordinary odyssey. After the roadster made the rounds of the show-car circuit, it was sent back to Carrozzeria Ghia in Italy. “My dad wanted to buy it,” Exner Jr. says, “but if it had stayed in the U.S., it would have to have been destroyed.” Ghia sold it to a Swiss man, identified in many sources as either a businessman or a butcher, who in turn sold it to Mohammad Reza Pahlevi, a noted Persian car collector who just happened to be the Shah of Iran. 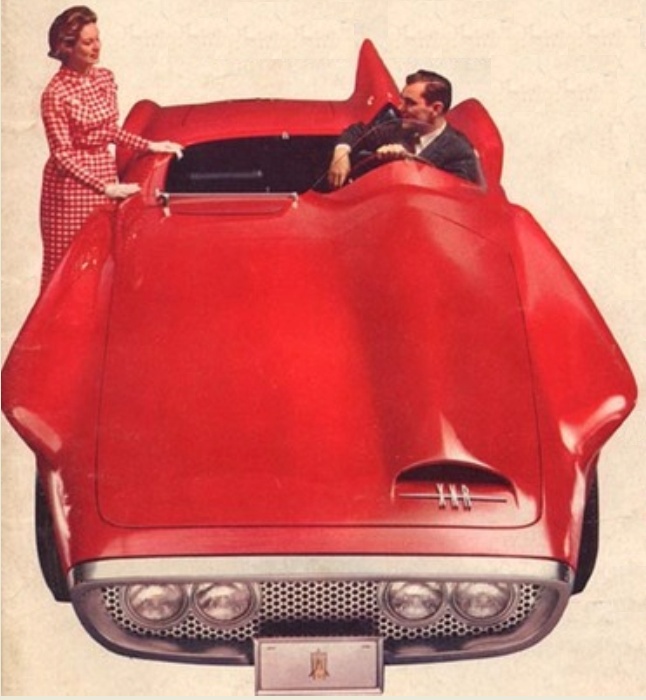 Some time later, the XNR was again sold, this time to a Kuwaiti gentleman named Anwar al Mulla, and a photograph of the car with al Mulla appeared in May 1969, in a National Geographic article describing the new affluence in Kuwait. Changing hands once again, the XNR made its way to Lebanon in the early-1970s, just prior to the Lebanese Civil War (1975–1991), and it was hidden away in an underground garage. 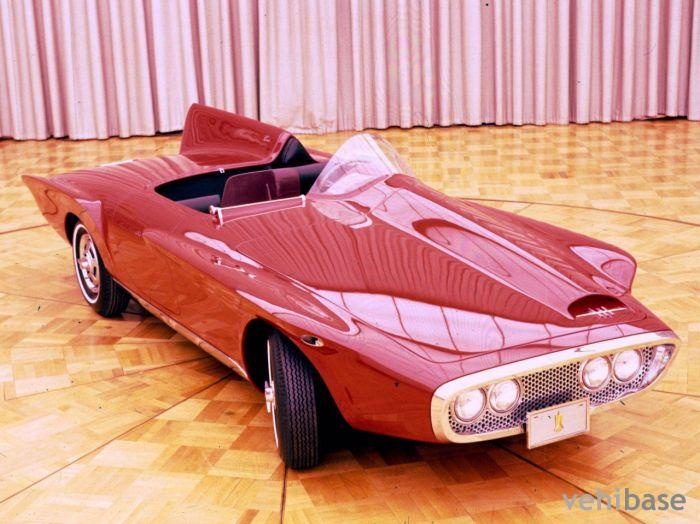 Enter Karim Edde, another Lebanese man who began collecting cars in 1977, when he was 15. Starting a car collection in the midst of a conflict was a brave endeavor. Karim, who inherited his automotive passion from his father, “was always searching for classic sports cars, which were difficult to spot as people didn’t drive them during the war.” 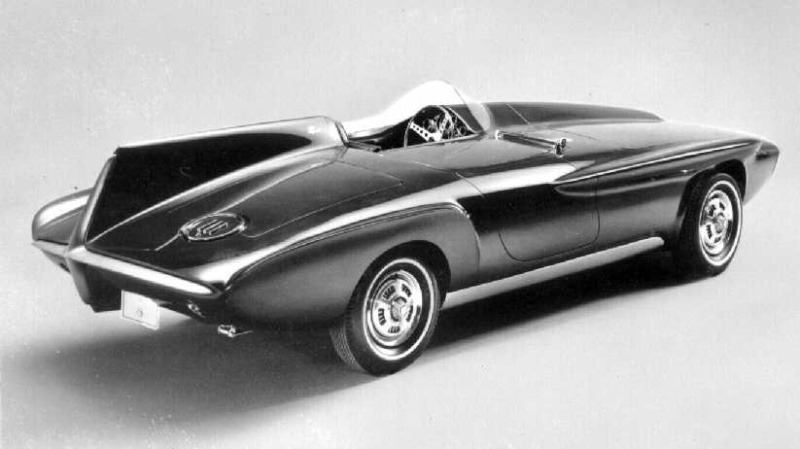 In the 1980s, Edde was paying Beiruti teenagers to “...go on their scooters to search the underground garages in the upscale areas—I was looking for Ferraris—and one day, they were all excited about a ‘weird’ car they’d found in a garage just 200 meters from my home. I recognized the XNR from a Swiss book I owned called Dream Cars.” He immediately bought it.

Despite the war in progress, the resourceful Mr. Edde was undaunted. “I hid the XNR in an underground warehouse,” he recalls, “that seemed safe at the time, but when the conflict became more global, I had to move it to a different location. In fact, the last two years of the war were so bad, I had to move the car many times to save it from destruction. We had no flat bed trucks, so we used long arm tow trucks to lift the car and put it on a truck and move it around. It was a delicate operation, but we had no choice, we had to move the car to safer locations. After the war ended, the car waited patiently for me to find a restorer that could bring back its past glory.”

Karim Edde spoke with many restorers. After visiting the RM Restoration facilities in Canada, he was convinced they were the right people for the job. “I sent them the XNR in 2008, they started working on it in March 2009, and finished it in March 2011, in time to be displayed at the Amelia Island Concours d'Elegance.”

Mario Van Raay, general manager of RM Restoration says, “When we received the XNR in 2008, the body shell was intact and, considering its history, in surprisingly good condition. Many original parts accompanied the XNR, but our greatest challenge was the re-creation of the missing components. Considering that this was a concept car, there was incredible attention to detail, right down to the fine leather interior, beautiful instrument cluster, and custom built hubcaps. Each hubcap was comprised of 35 individual metal pieces. We had to completely scratch-build those hubcaps. Because of the extensive information and many high quality photos available, we could not take any liberties when re-manufacturing all these components. They had to be exact.”

The XNR will be a welcome entrant to many concours events, evidenced by the numerous invitations Mr. Edde has received since bringing the XNR back to life.

An amazing story: although thought lost for good, after 50 years, the XNR returns to North America with a full account of its whereabouts and history. Lovingly restored to its past glory, the XNR once again reflects the epitome of styling freedom in an age where fierce competition dictated bold changes in design to attract the attention of the motoring public.
_________________
We don't care the People Says , Rock 'n' roll is here to stay - Danny & the Juniors - 1958