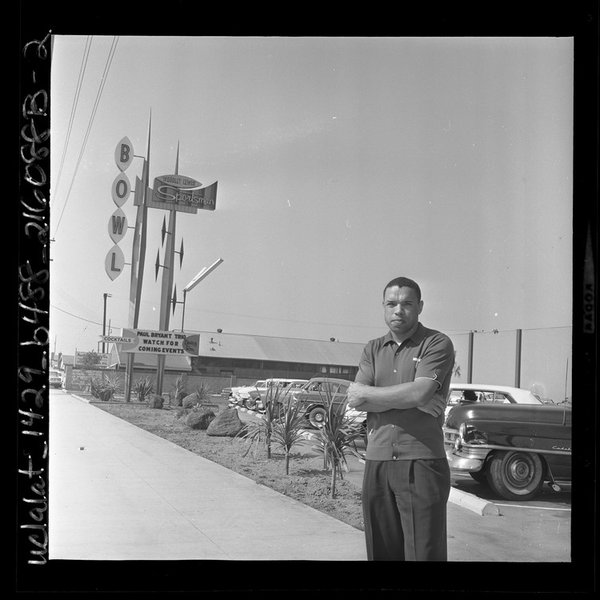 1950 North Central Avenue started its life as the Woodley Lewis Sportsman Bowl. In 1962, Lewis — a Compton native who had been among the first players to break the color barrier in the N.F.L. — took the money he’d earned as a star defensive back for the Los Angeles Rams and invested in a 36-lane bowling alley with an attached restaurant and cocktail lounge. Its opening marked the first wave of black entrepreneurship in Compton. Lewis proudly hung an award plaque sent to him by Chivas Regal. In 1963, his establishment was the brand’s highest-grossing merchant in South Los Angeles.

Next door to the Sportsman Bowl was the Dooto Music Center, an entertainment complex established by Walter Williams, known as Dootsie. Williams amassed a fortune as a record producer — for the Penguins, whose 1954 single “Earth Angel” became a doo-wop standard, and then for a string of local black club comics, including Redd Foxx, George Kirby and Sloppy Daniels, all of whom released their first LPs on the Dooto label. Dootsie’s complex was a combined recording studio, film and television production facility and 1,000-seat auditorium. He envisioned a black-operated entertainment conglomerate: Compton’s own NBC.

The prosperous future that Williams and Lewis intended for southern Central Avenue didn’t survive the 1965 Watts riots. Compton escaped the arson and looting that ravaged neighborhoods to the north, but it couldn’t withstand the psychological fallout. The middle class fled Compton in the late 1960s, decimating business at the bowling alley. Lewis was subsequently arrested for bookmaking in 1970. Shortly thereafter, the inside of his Sportsman Bowl was destroyed in a fire of mysterious origin. Dootsie relocated his investments to Mexico, leaving a young Compton hustler, Lonzo Williams, to operate Dooto’s as a nightclub, while copper thieves gradually stripped the vacant Bowl for every inch of pipe and wire.

The Bowl lay dormant until the late 1970s, when Schweisinger — then a budding commercial real estate agent with an eye for investments — was invited to take his first look inside, armed with a wide-beam flashlight. A series of sunlit cracks spread like white veins across the domed ceiling. When Schweisinger turned his beam onto the floor, he saw a lake of stagnant water covering all 36 lanes, the polished floorboards contorted like the tracks of a roller coaster. From the mud that coated the old cocktail lounge, he excavated Woodley Lewis’s Chivas Regal
plaque. 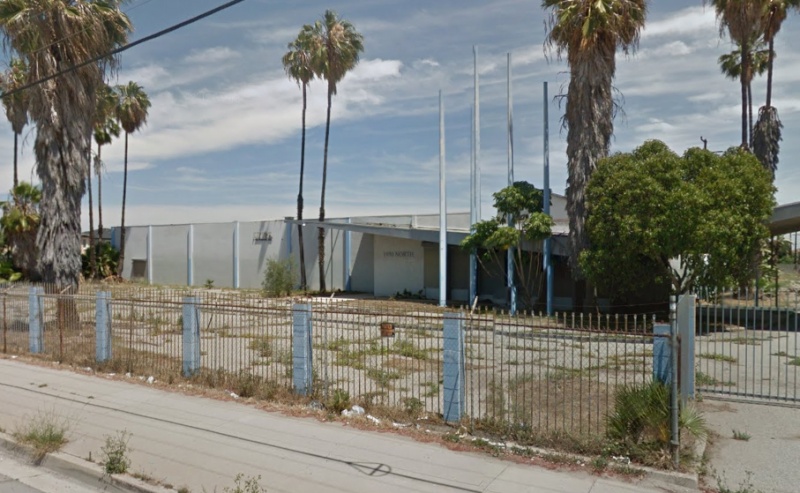 The property offered 40,000 square feet on three acres, and the asking price had dropped to $300,000. Schweisinger calculated that within a few years, he could turn a profit just by renting out the parking lot for truck storage. In the meantime, he fielded plans from prospective operators. The one idea he kept hearing was for a roller rink. Skating was hot, but no one from the neighborhood had the start-up money to make it happen. Conversely, nobody with financial credentials wanted anything to do with Compton.

Though he lived with his family in the Orange County suburb of Westminster, Schweisinger was at ease in the inner city. Growing up in the South Bay, he worked shifts in the grocery store his father owned on Avalon and Imperial, two blocks north of the flash point of the 1965 riots. On the second night of unrest, the Schweisingers were glued to the television. Helicopter coverage showed dozens of looters running from their store with sides of beef, sodas and anything else they could carry out. Schweisinger’s father, Fred, had to turn away from the screen. 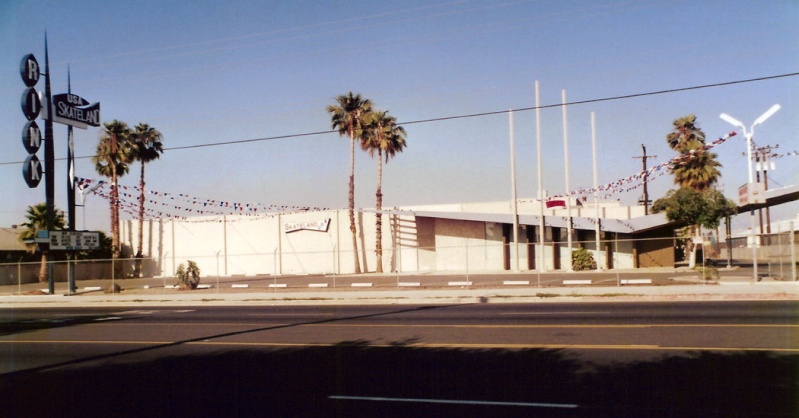 The Skateland U.S.A. roller rink opened to the public on January 6th, 1984. During the 1980’s, gang activity was at its height throughout Los Angeles County. By 1982, the number of gang homicides had doubled. The effects of Reagan’s foreign policies resurfaced in the form of crack cocaine within the poor and ethnic communities of Los Angeles creating factors (drug trade, gang warfare, prostitution, robbery, etc.) that devastated neighborhoods.
Formerly Skateland U.S.A. 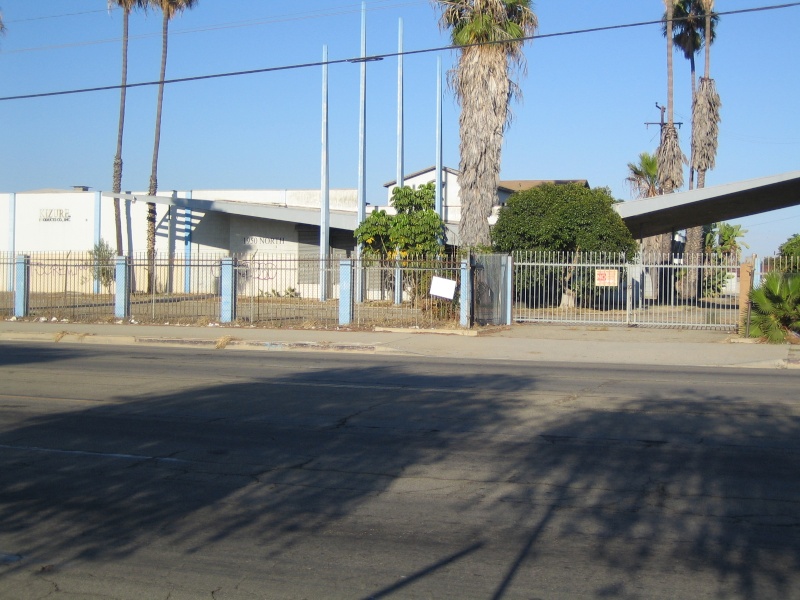 With the opening of Skateland U.S.A. in 1984, it provided a safe haven for the local communities and those plagued by the onslaught of criminal activity. The roller rink became a staple of entertainment for the African-American community of Compton and provided many jobs for the local residents. The roller rink featured concerts, album release parties, radio promotional events, and weekly dances, dance occupancy was 1,700 people but held as many as 2,000 for concerts. Before Skateland U.S.A. opened, the building was formerly a certified AMF 36-lane bowling alley.

Among early sites for Hiphop in Los Angeles some of the most important were roller rinks such as Skateland U.S.A. and World on Wheels. The Compton roller rink, equivalent to midtown World on Wheels, was known as the home turf to the Bloods gang organization. For the grand opening of Skateland U.S.A., the roller rink celebrated with a concert featuring local legends the World Class Wreckin’ Cru. Soon thereafter, the Compton location become synonymous for providing a platform for early West and East Coast Hiphop music. Many up-and-coming R&B and Rap artist where featured at the roller rink, local legends The World Class Wreckin’ Cru, East Coast duo Eric B. and Rakim, teen sensations New Edition, West Coast DJ pioneer Mixmaster Spade, Flavor Unit member Latifah (Queen), and the first ever performance of N.W.A. At the time, Dr. Dre maintained DJ duties at Skateland U.S.A. and begun fostering rap talent. One of the crews Dr. Dre took a liken to and began working with was a trio known as C.I.A. (Criminals In Action). The C.I.A. crew, which consisted of Darrell “K-Dee” Johnson, Tony “Sir Jinx” Wheatob, and O’Shea “Ice Cube” Jackson, established a regular gig at Skateland U.S.A. and Eve’s After Dark; through Dr. Dre. Also, Eric “Eazy-E” Wright would hang out with DJ Yella and Dr. Dre inside the DJ booth and talk about forming a South Central supergroup. Shortly thereafter, during Skateland U.S.A.’s after parties Eazy-E, Dr. Dre, and DJ Yella could be seen composing music in the snack bar.
_________________
We don't care the People Says , Rock 'n' roll is here to stay - Danny & the Juniors - 1958