https://toytales.ca/rock-em-sock-em-robots-marx-1966/
It’s a battle to the death!

Well, that may be a bit dramatic but Rock ‘Em Sock ‘Em Robots is a go-to game if you want to let off some steam.

This two-player action toy featuring dueling robot boxers proved to be a hit for the Marx Toy Company when it was released to the North American market in 1966. In addition to providing endless hours of pugilistic fun, the toy also lays claim to introducing the phrase “knock his block off” into the pop culture vernacular.

Rock ‘Em Sock ‘Em Robots was designed and patented by Marvin Glass and Associates, a prolific toy design and engineering firm based out of Chicago until it closed in 1988. By today’s standards, the toy was decidedly low-tech, eschewing battery power for manual dexterity and fast-twitch muscle fibres. Channeling their inner Mickey Goldmill of Rocky fame, players manage one of two front-facing robots via a moveable lever/joystick. By repeatedly pressing buttons on the joystick, each player commands his or her robot to throw a combination of left jabs and right upper cuts at the other. The object of the game is to relentlessly unleash a flurry of punches at the opposing robot until the head of one of the robots pops up, signaling the end of the round – and sweet victory. 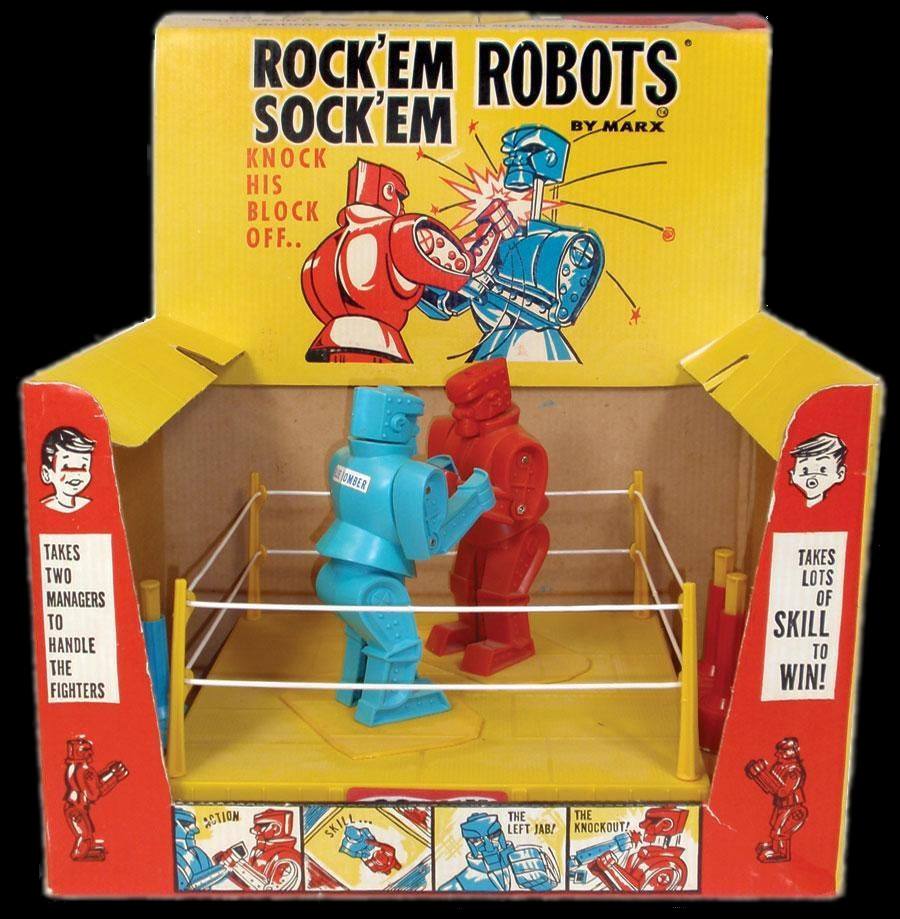 The toy’s patent reveals the spring-loaded mechanism that allowed the head to rest snugly atop the robot’s body, until it was sufficiently displaced by an opposing punch. The act of knocking someone’s block off was accompanied by an audible whirring sound that the patent refers to as a “zinging sound” which will be instantly familiar to anyone that has played the game.

The original Rock ‘Em Sock ‘Em Robots retailed for $8 to $10 and was recommended for players ages 4 and up. The package included the ring, robots, instructions, and a scorecard. Over the years, the toy has seen many spin-off products, including app and video game versions. Currently, Mattel sells a version of the toy about half the size of the original. 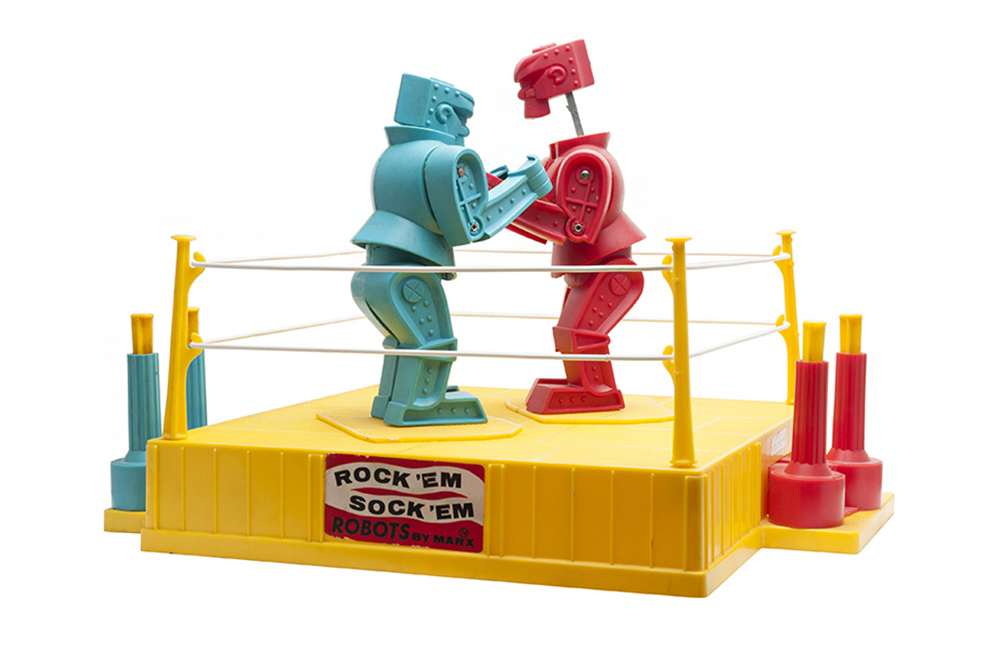 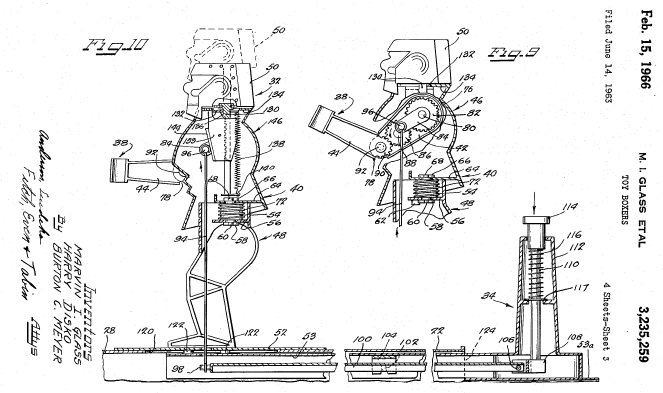 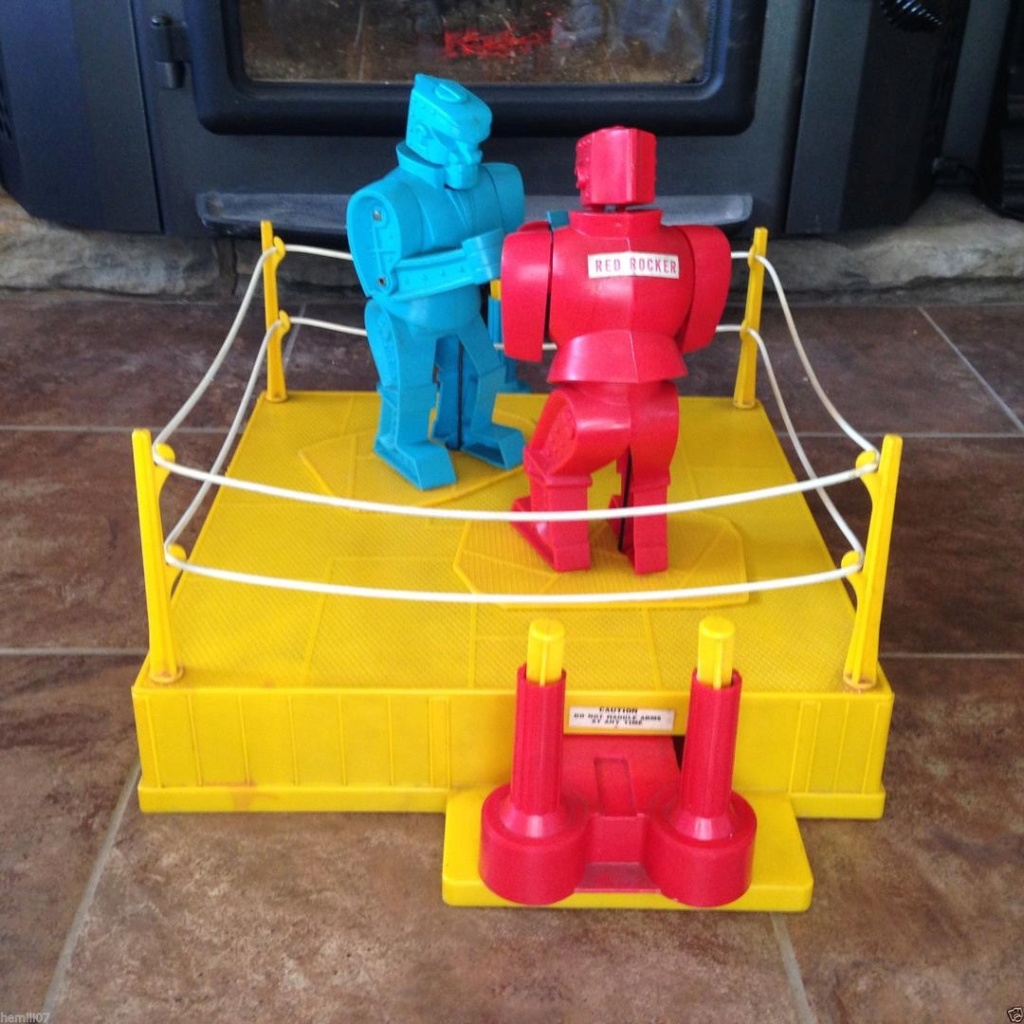 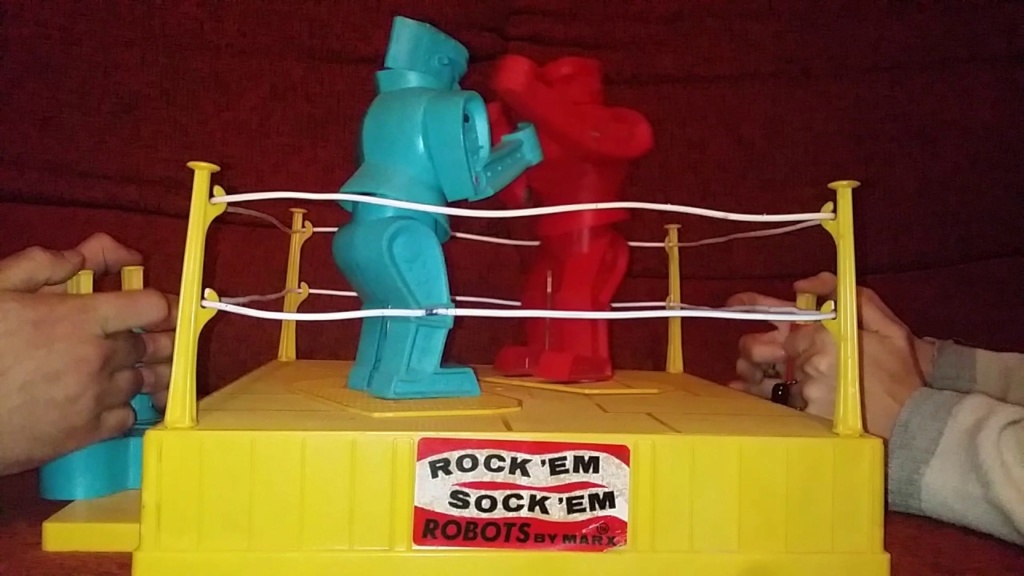 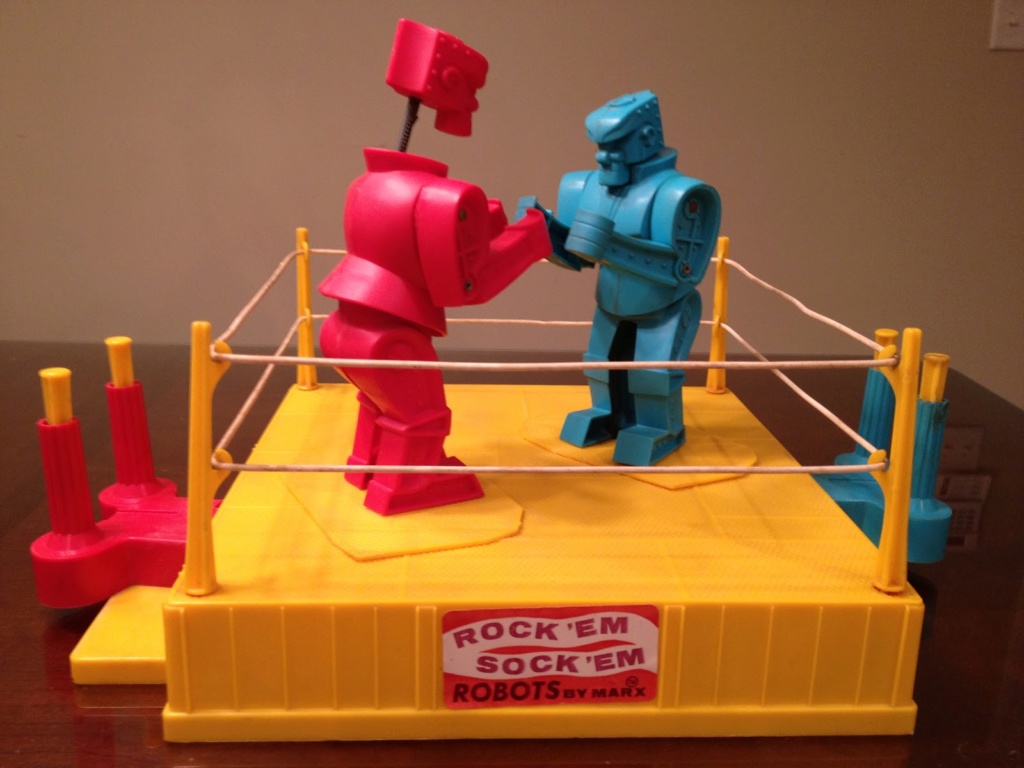 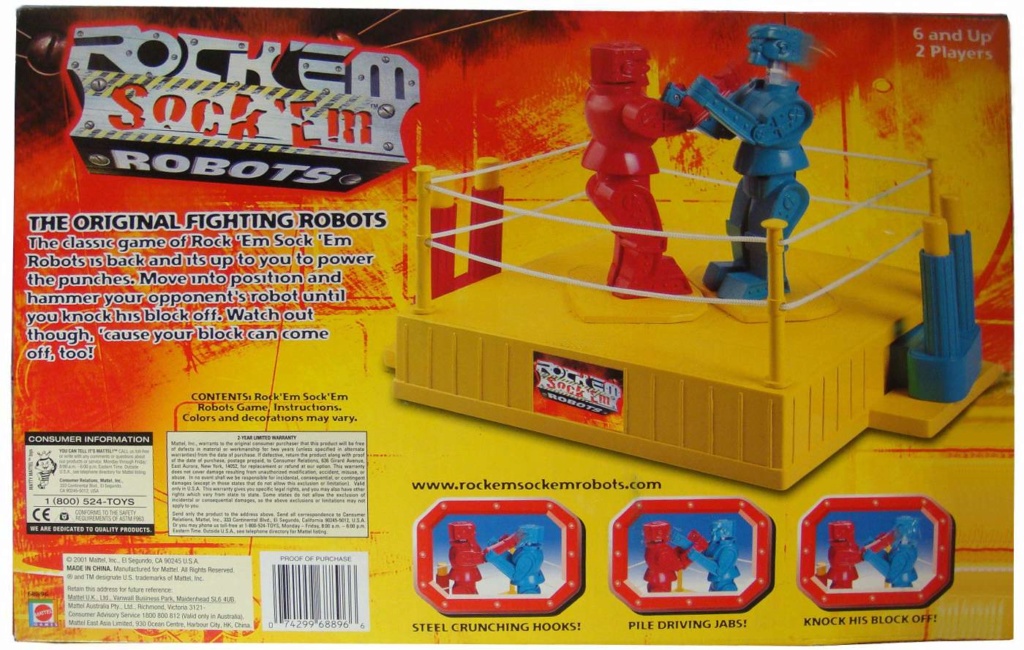 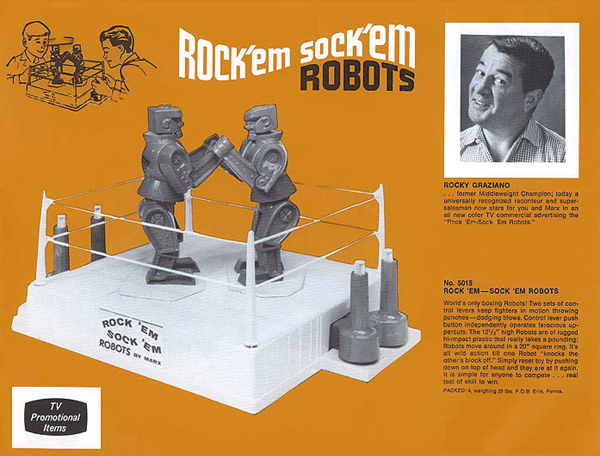 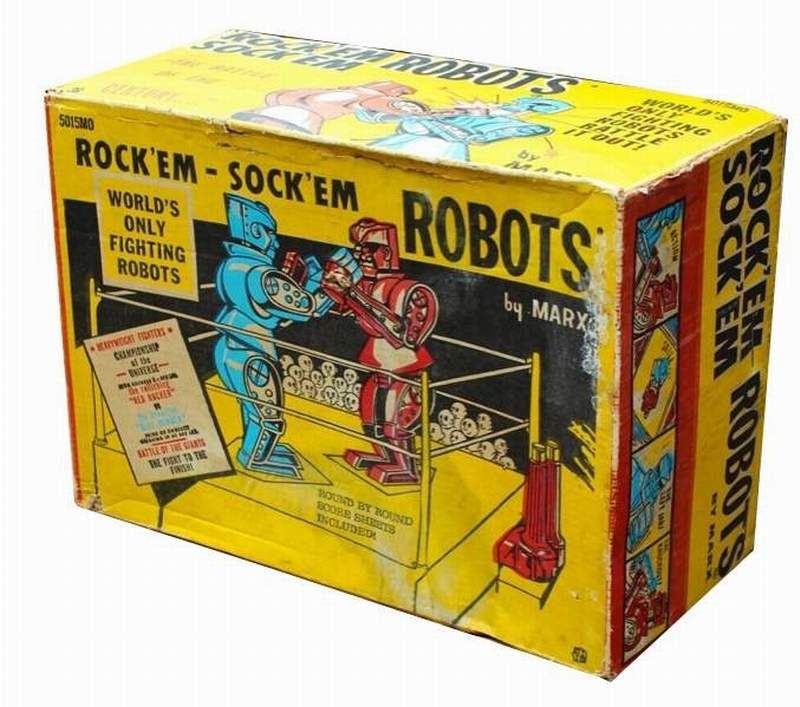 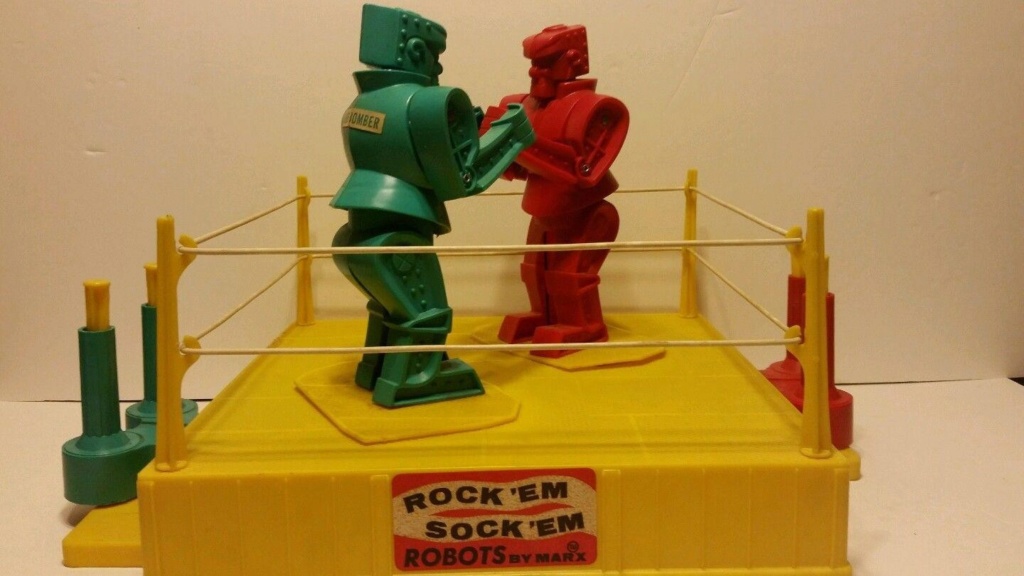