https://www.whichcar.com.au/features/chopped-custom-1949-ford-club-coupe-spinner
Paul Naughton's custom '49 Ford was built for cruising and to look cool as hell doing it

HAVEN’T got enough to do? Retire! That’s Paul Naughton’s advice. 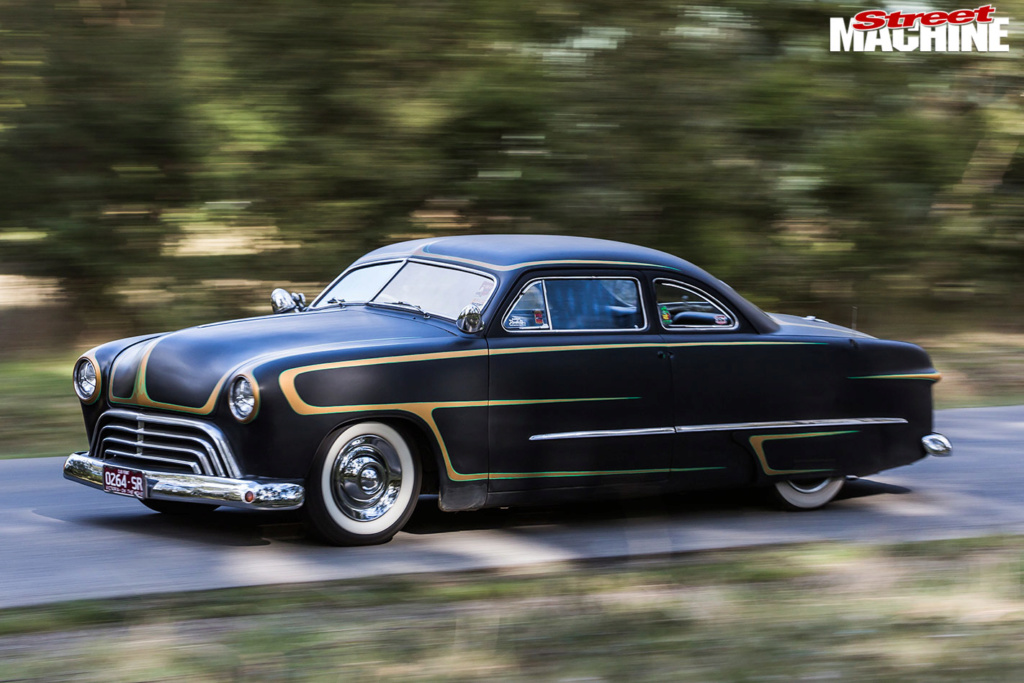 Paul is somewhere north of 50, and has been a Ford man through and blue since his first car, a 24-quid ’32 roadster when he was 16. He’s been a panel beater his entire adult life, but he says the pace really picked up once he decided to take it easy and enjoy his well-earned retirement. Now he’s busier than a one-armed Beiruti bricklayer with crabs. “Flat-out, all the time, always doin’ stuff,” he says. 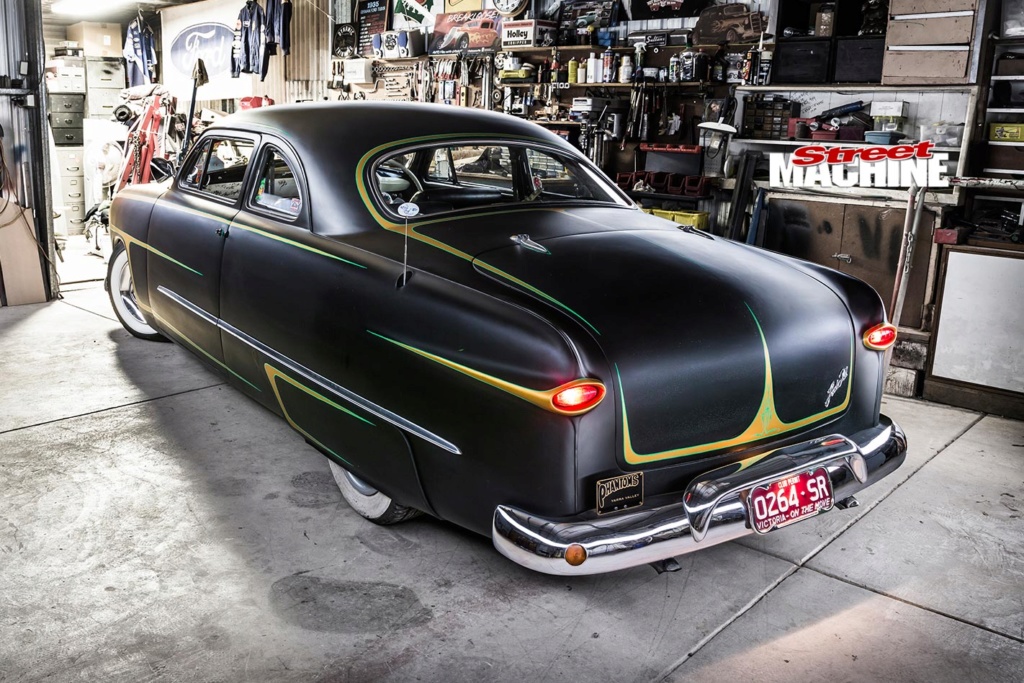 The Ford's pony motor, lowered Pedders coils and brakes that work all make passing a breeze and cruising a pleasure

We’re at Paul’s place in Gladysdale, Victoria. It’s buried in the nether regions of the Yarra Ranges, a long way through the winding hill roads from where Paul was born, in Brunswick, Melbourne. That tells you a little bit about the way his ’49 Club or ‘longback’ Ford coupe – a single-spinner – came about.

The spinner has a relaxed, cool, easy style that precedes the iconic touchpoints of 50s car design. No huge wheelbase, no fins, no gunsights or canted pillars – just a soft, streamlined design from a world just four years out from WWII.
_________________
We don't care the People Says , Rock 'n' roll is here to stay - Danny & the Juniors - 1958 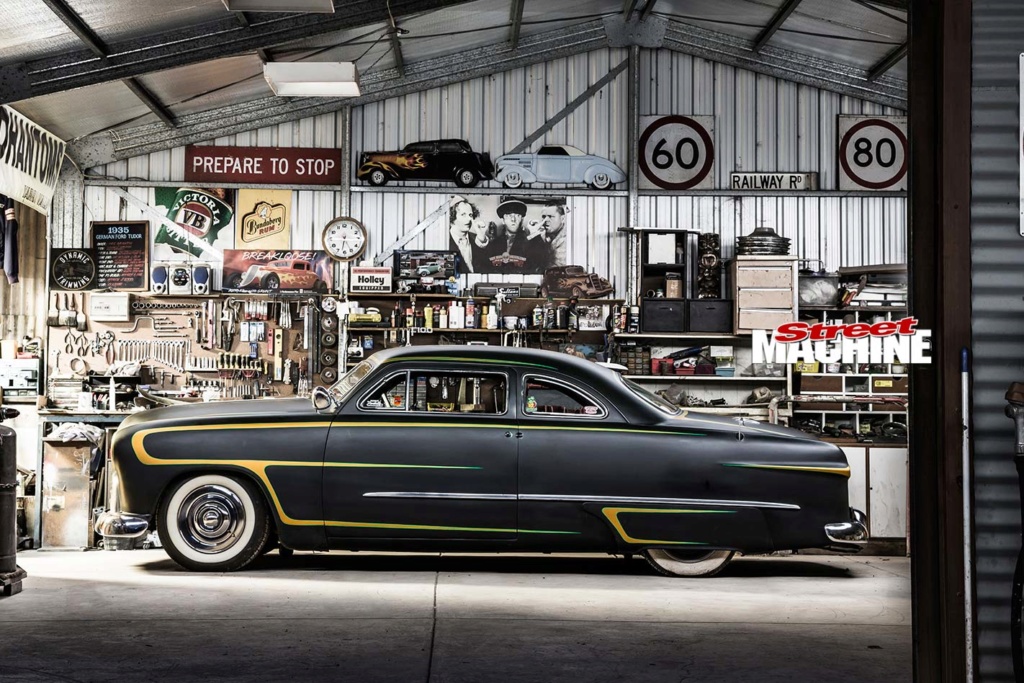 Paul’s example came from the mystical land of Americar through Brian Barber’s Select Autos, way back in 1996. It was an unmolested specimen with a super-straight body in dark blue, but with a tired grey interior. That didn’t matter to Paul; it was all going anyway. 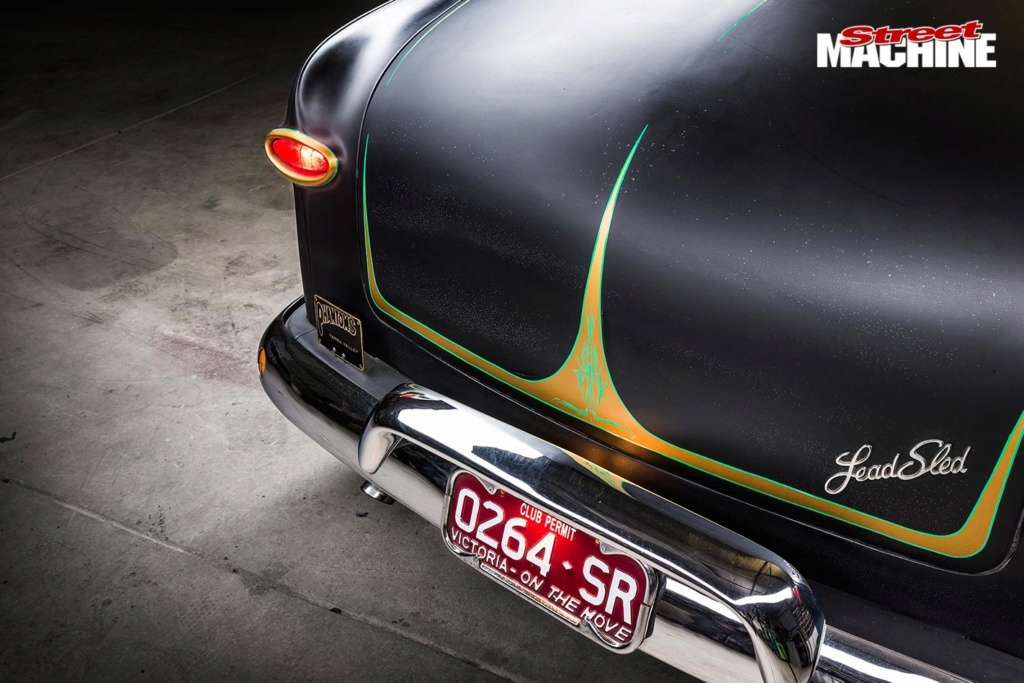 This was to be a custom cruiser, but we aren’t talking 20mph on the Esplanade, then back on the trailer. Paul lives in the hills, and he likes to drive – the car had to be able to do the miles. His first and last thought on how to make this all work was to use an OHV Ford motor. “It had to be a Ford,” he says. “A 289 – I like the little Windsor.” 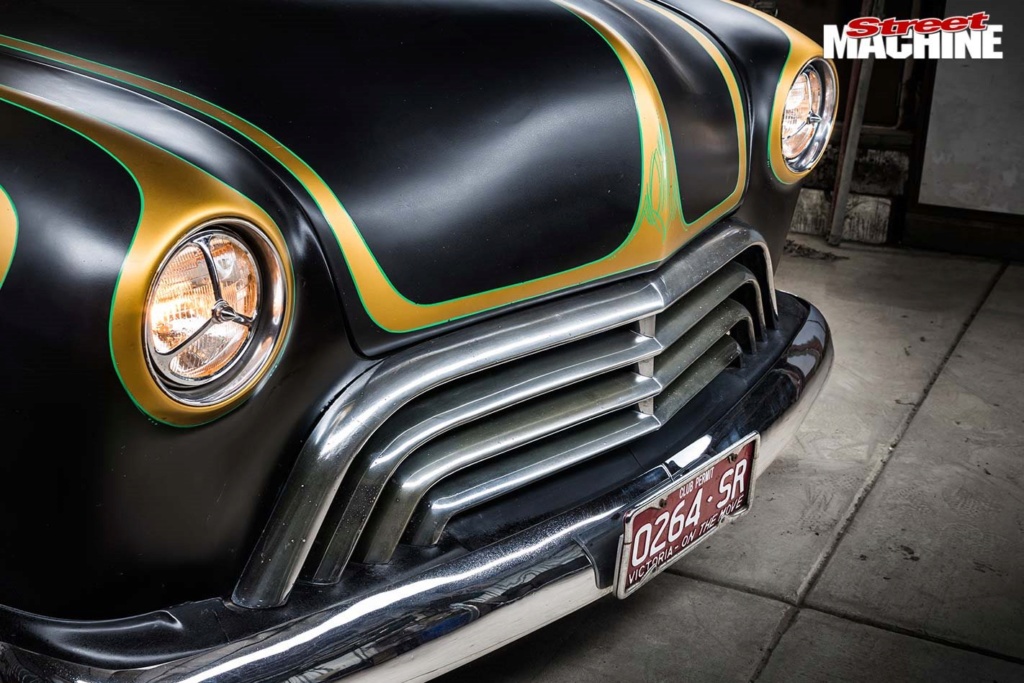 Paul’s original plan was to use an HQ panel van chassis for increased rigidity, suspension and braking, but when he looked a little closer he found that the kick up toward the rear of the pano frame was not going to be helpful. So his eyes wandered elsewhere, to the Land of the Rising Sun.
_________________
We don't care the People Says , Rock 'n' roll is here to stay - Danny & the Juniors - 1958 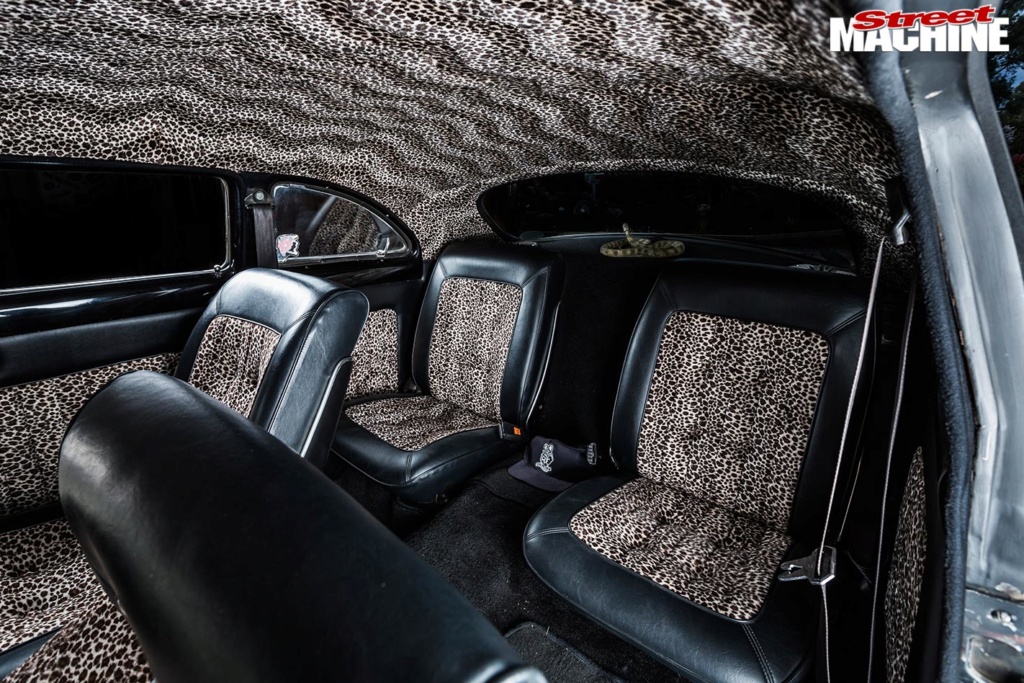 With tape measure in hand, Paul soon ascertained that an early-70s Toyota Crown could give him everything he needed, so after snapping one up, he set to work. He need to add six inches to the rear to get the wheelbase right, and channel the body four inches to get the height. The Ford floor went to God, and the front section was on the way anyway. 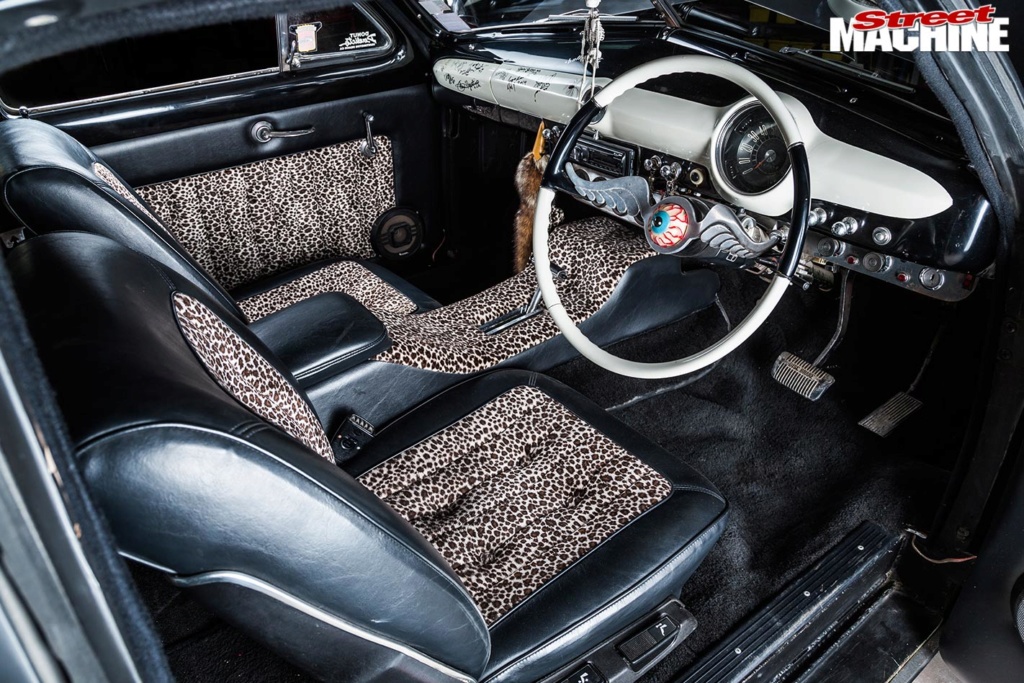 A roof chop was set at three-and-a-half-inches flat, and there’d be no messing with that B-pillar, thanks, it was staying straight up and down. Instead Paul leant the front and rear glass in and set to work on the turret panel – the hard part of making a chop work. 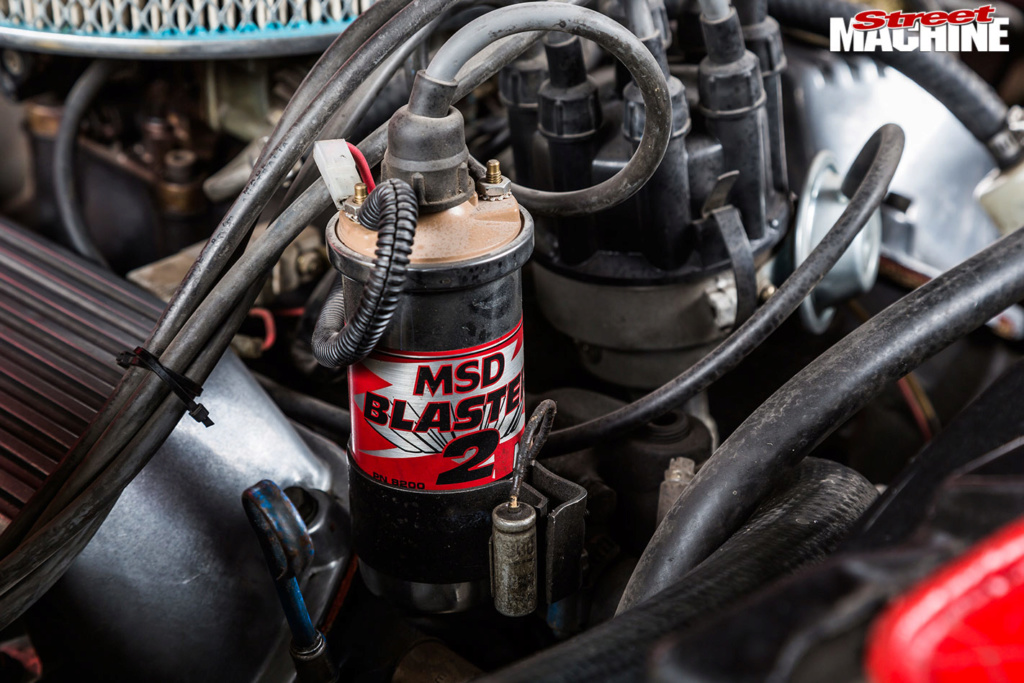 Paul lengthened the bonnet, frenched the headlights, and then the tail-lights to take the ’49 lenses. He also frenched the aerial, dug up a ’49 Olds grille and hammered out a pair of rear skirts. The ’55 Ponty number-plate surround for the rear bumper was the fruit of a three-year search. And those caps? ’55 Caddy sombreros.
_________________
We don't care the People Says , Rock 'n' roll is here to stay - Danny & the Juniors - 1958 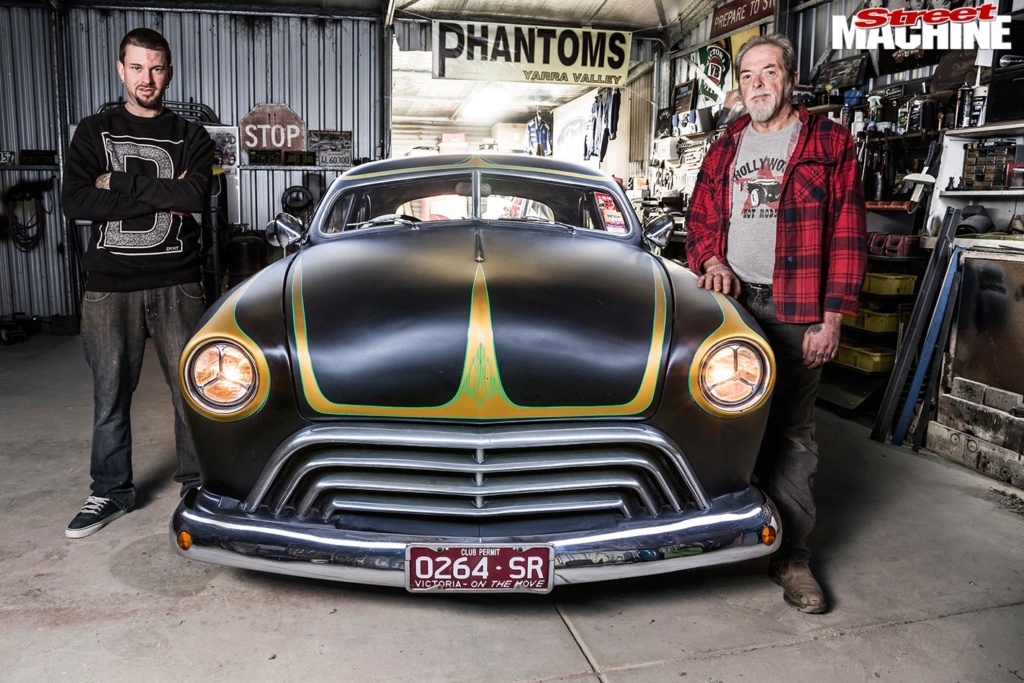 The Toyota had been leant on for all the practical parts, but where was the romance? Where was the heartbeat? Pete’s Mustangs in Lilydale supplied the 289 that Paul needed. The motor is so stock that it still runs the Autolite carb on top. Paul ran the exhaust himself, a simple twin system with Smithy’s glasspacks. 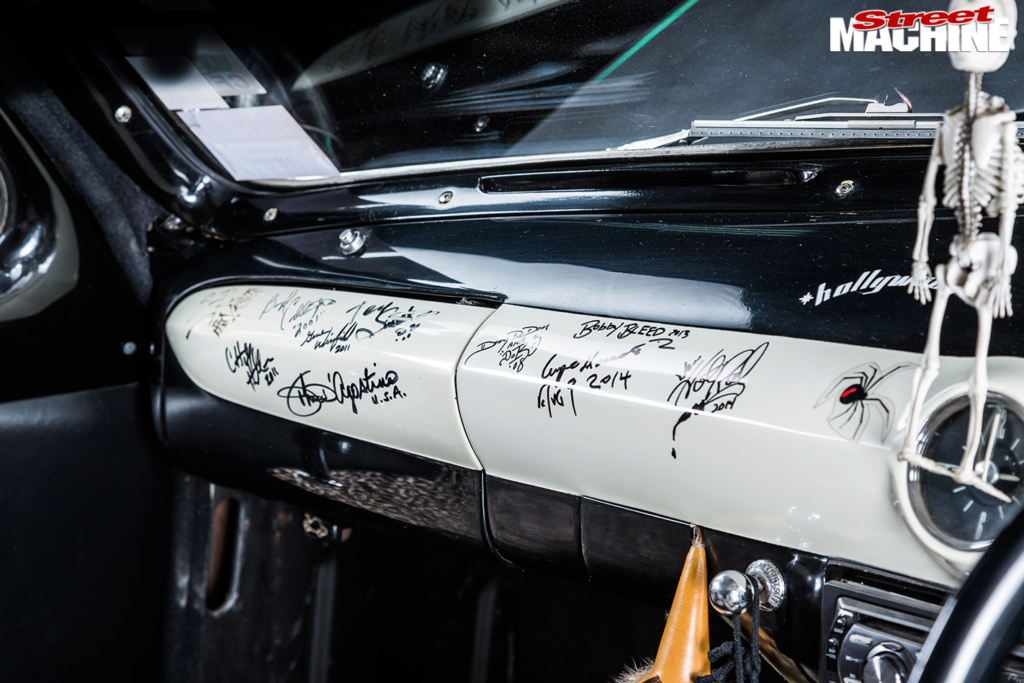 A C4 auto is connected by a custom tailshaft to a Toyota diff housing. Inside you’ll find a 3.08 Holden V8 centre – a straight swap, no mods needed. The 205/15 Coker 70-series whitewalls on Galaxie rims then take the sweet 289’s pony-power to the long and winding road. 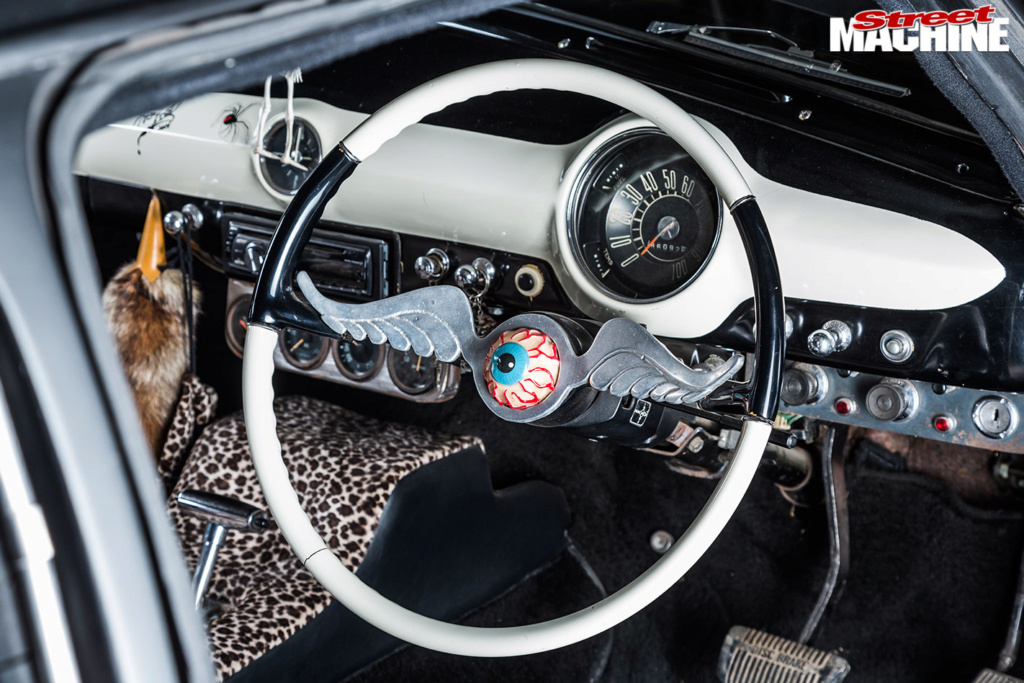 Inside, a ZD Fairlane provided the shifter, and also gave up some knobs for the interior, alongside International gauges and a ’49 Ford speedo. Mark Grant at Dynamic Trimming stitched the ocelot inserts for the 60s-era Japanese buckets – two in front, two behind – and then fashioned the headlining. There can’t be too many ocelots left.
_________________
We don't care the People Says , Rock 'n' roll is here to stay - Danny & the Juniors - 1958 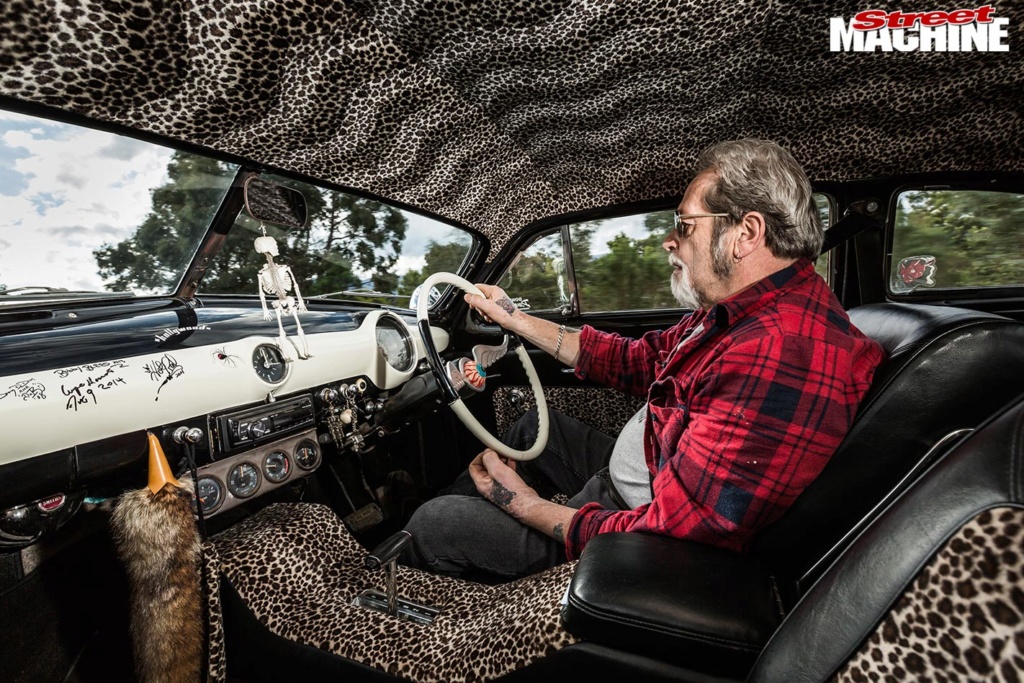 When you’re sitting in those seats, you mightn’t notice straight away, but the floor has been outset four inches so it doesn’t feel like you’re sitting on the mat at school with your legs straight out in front of you. 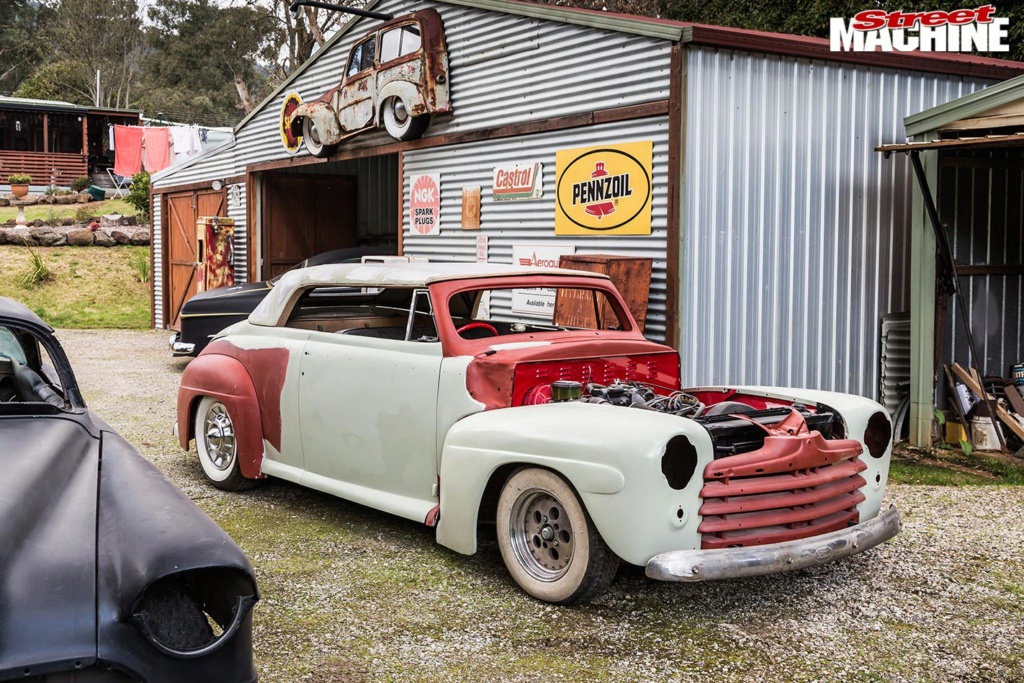 Now Paul’s spinner is a sweet cruiser that smooths out the hills and turns corners as well as it turns heads. But it’s certainly not the only tasty ride he owns. As we leave Paul’s workshop, it’s impossible to miss his recently revamped ’35 tudor in original beige.
“I’ve had that car for 50 years,” Paul states. Hey, we did say he was “somewhere north of 50”! 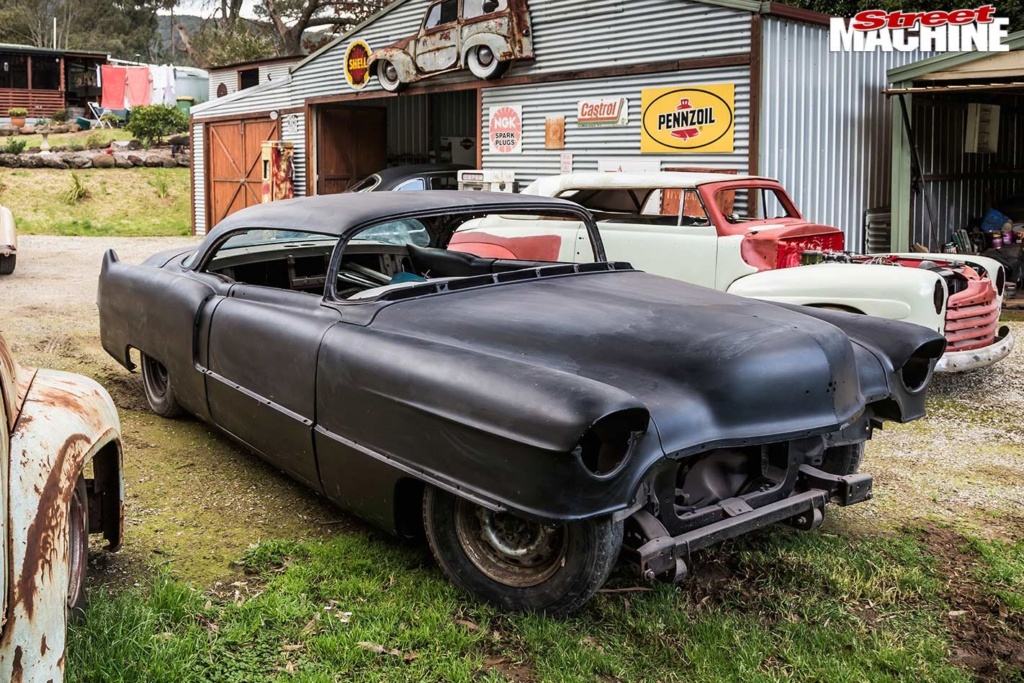