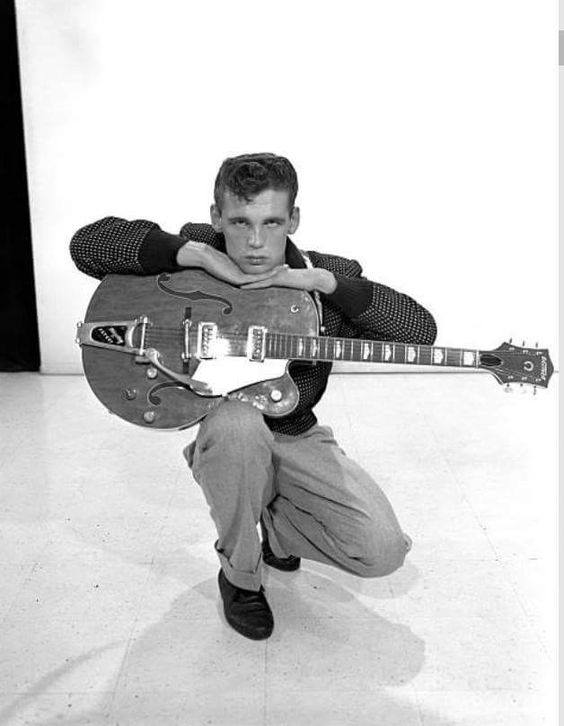 Duane Eddy (born April 26, 1938) is an American guitarist. In the late 1950s and early 1960s, he had a string of hit records produced by Lee Hazlewood which were noted for their characteristically "twangy" sound, including "Rebel Rouser", "Peter Gunn", and "Because They're Young". He had sold 12 million records by 1963.[2] 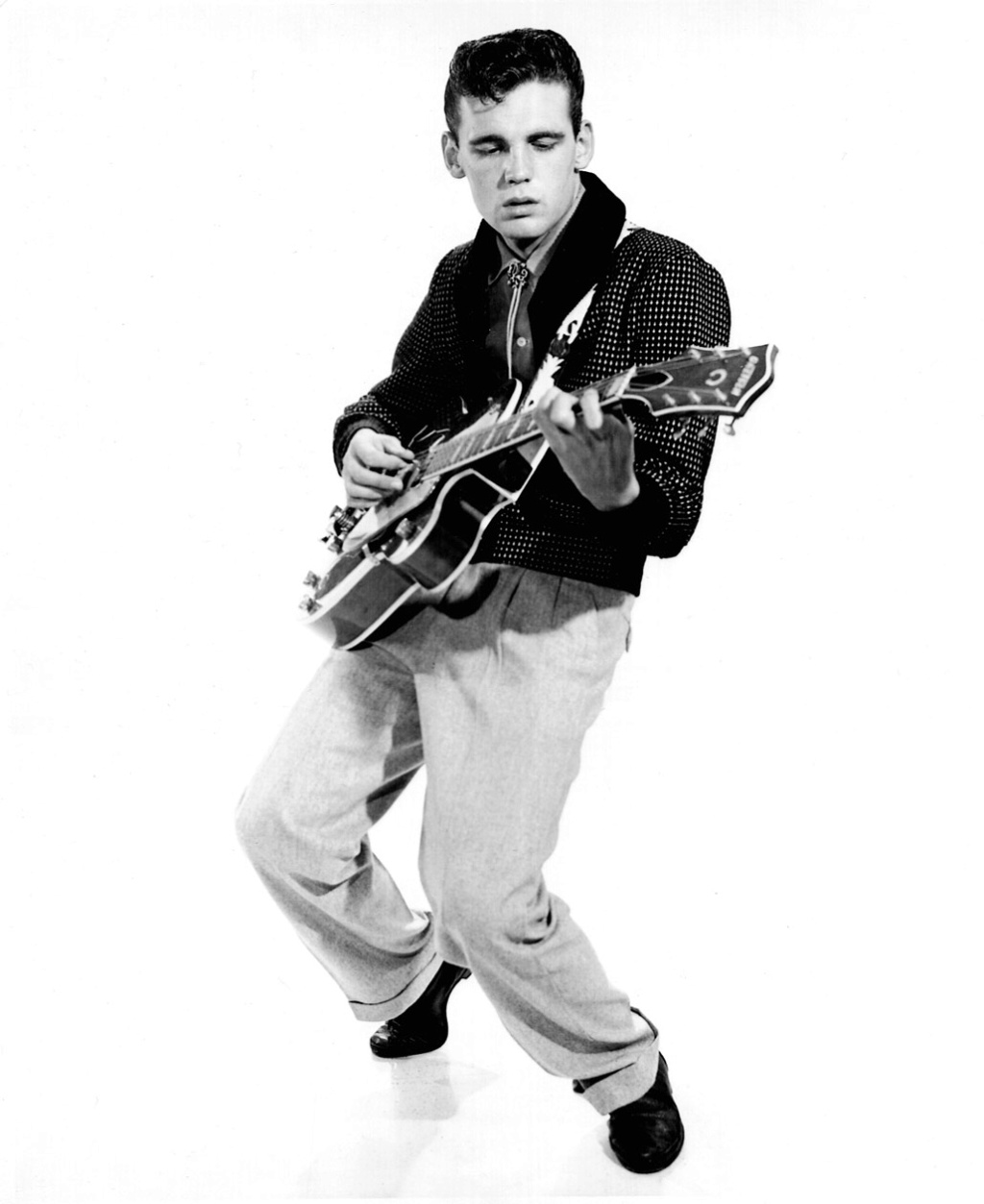 Born in Corning, New York, he began playing the guitar at the age of five. In 1951, his family moved to Tucson, and then to Coolidge, Arizona. At the age of 16 he obtained a Chet Atkins model Gretsch guitar and formed a duo, Jimmy and Duane, with his friend Jimmy Delbridge (who later recorded as Jimmy Dell) While performing at local radio station KCKY, they met disc jockey Lee Hazlewood, who produced the duo's single, "Soda Fountain Girl", recorded and released in 1955 in Phoenix. Hazlewood then produced Sanford Clark's 1956 hit, "The Fool", featuring guitarist Al Casey, while Eddy and Delbridge performed and appeared on radio stations in Phoenix before joining Buddy Long's Western Melody Boys, playing country music in and around the city.

Eddy devised a technique of playing lead on his guitar's bass strings to produce a low, reverberant "twangy" sound. In November 1957, Eddy recorded an instrumental, "Movin' n' Groovin'", co-written by Eddy and Hazlewood. As the Phoenix studio had no echo chamber, Hazlewood bought a 2,000-gallon (7570-litre) water storage tank which he used as an echo chamber to accentuate the "twangy" guitar sound. In 1958, Eddy signed a recording contract with Lester Sill and Lee Hazlewood to record in Phoenix at the Audio Recorders studio. Sill and Hazlewood leased the tapes of all the singles and albums to the Philadelphia-based Jamie Records.

Eddy had a succession of hit records over the next few years, and his band members, including Steve Douglas, saxophonist Jim Horn and keyboard player Larry Knechtel would go on to work as part of Phil Spector's Wrecking Crew. According to writer Richie Unterberger, "The singles – 'Peter Gunn', 'Cannonball', 'Shazam', and 'Forty Miles of Bad Road' were probably the best – also did their part to help keep the raunchy spirit of rock & roll alive, during a time in which it was in danger of being watered down." On January 9, 1959, Eddy's debut album, Have 'Twangy' Guitar Will Travel, was released, reaching number 5, and remaining on the album charts for 82 weeks. On his fourth album, 'Songs of Our Heritage' (1960), each track featured him playing acoustic guitar or banjo. Eddy's biggest hit came with the theme of the movie Because They're Young in 1960, which featured a string arrangement, and reached a chart peak of number 4 in America and number 2 in the UK in September 1960. It became his second million-selling disc. Eddy's records were consistently even more successful in the UK than they were in his native US, and in 1960, readers of the UK's NME voted him World's Number One Musical Personality, ousting Elvis Presley.

In 1960, Eddy signed a contract directly with Jamie Records, bypassing Sill and Hazlewood. This caused a temporary rift between Eddy and Hazlewood. The result was that for the duration of his contract with Jamie, Eddy produced his own singles and albums.

During the 1960s, Eddy launched an acting career, appearing in such films as A Thunder of Drums, The Wild Westerners, Kona Coast, The Savage Seven, and two appearances on the television series Have Gun–Will Travel.He married singer Jessi Colter in 1961, the same year he signed a three-year contract with Paul Anka's production company, Camy, whose recordings were issued by RCA Victor. It was in the early days of recording in the RCA Victor studios that he renewed contact with Lee Hazlewood, who became involved in a number of his RCA Victor singles and albums. Eddy's 1962 single release, "(Dance With The) Guitar Man", co-written with Hazlewood, earned his third gold disc by selling a million records 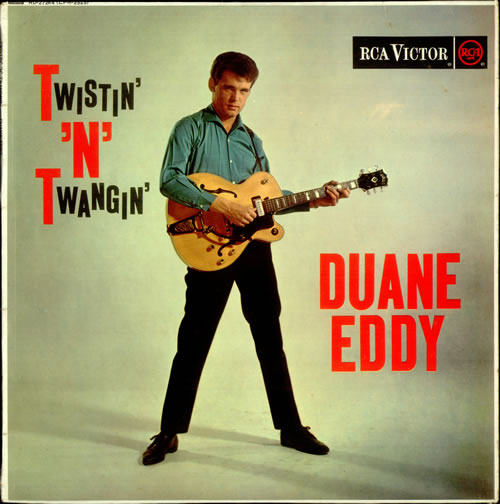 In the 1970s, he produced album projects for Phil Everly and Waylon Jennings. In 1972, he worked with Al Gorgoni, rhythm guitar, on BJ Thomas's "Rock and Roll Lullaby". In 1975, a collaboration with hit songwriter Tony Macaulay and former founding member of The Seekers, Keith Potger, led to another UK top ten record, "Play Me Like You Play Your Guitar".[15] The single, "You Are My Sunshine", featuring Willie Nelson and Waylon Jennings, hit the country charts in 1977.[citation needed]

In 1986, Eddy recorded with Art of Noise, remaking his 1960 version of Henry Mancini's "Peter Gunn". The song was a Top Ten hit around the world, ranking number 1 on Rolling Stone's dance chart for six weeks that summer. "Peter Gunn" won the Grammy for Best Rock Instrumental of 1986. It also gave Eddy the distinction of being the only instrumentalist to have had Top 10 hit singles in four different decades in the UK.[citation needed] (Although his 1975 top 10 hit featured a female vocal group). 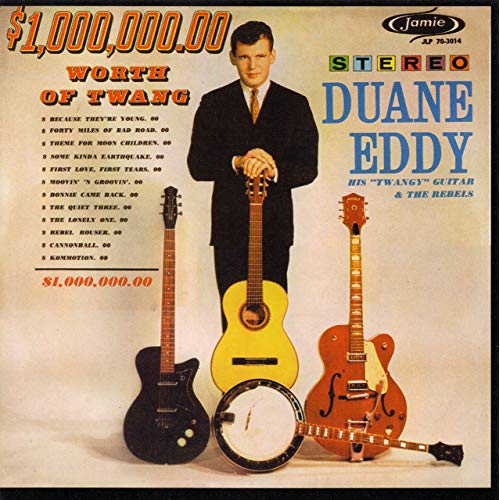 The following year, Duane Eddy was released on Capitol. Several of the tracks were produced by Paul McCartney, Jeff Lynne, Ry Cooder, and Art of Noise. Guest artists and musicians included John Fogerty, George Harrison, Paul McCartney, Ry Cooder, James Burton, David Lindley, Phil Pickett, Steve Cropper, and original Rebels, Larry Knechtel and Jim Horn. The album included a cover of Paul McCartney's 1979 instrumental, "Rockestra Theme". In 1982, Duane Eddy's Rebel Walk was heard in the musical comedy, Grease 2, featured as background music at the bowling alley, when the T-Birds rushed to face rival Leo Balmudo. Though it wasn't a part of the original soundtrack, it was mentioned in the film's credits. In 1992, Eddy recorded a duet with Hank Marvin on Marvin's album Into the Light, with a cover version of The Chantays' 1963 hit "Pipeline". 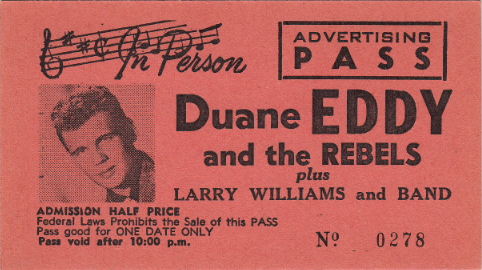 In the spring of 1994, Eddy was inducted into the Rock and Roll Hall of Fame. Eddy's "Rebel Rouser" was featured that same year in Forrest Gump. Oliver Stone's Natural Born Killers used "The Trembler", a track written by Eddy and Ravi Shankar. Also in 1994, Eddy teamed up with Carl Perkins and The Mavericks to contribute "Matchbox" to the AIDS benefit album Red Hot + Country produced by the Red Hot Organization. Eddy was the lead guitarist on Foreigner's 1995 hit "Until the end of Time", which reached the top ten on the Billboard Adult Contemporary chart. In 1996, Eddy played guitar on Hans Zimmer's soundtrack for the film Broken Arrow.

On April 5, 2000, at the Ryman Auditorium in Nashville, Tennessee, the title "Titan of Twang" was bestowed upon Eddy by the mayor. 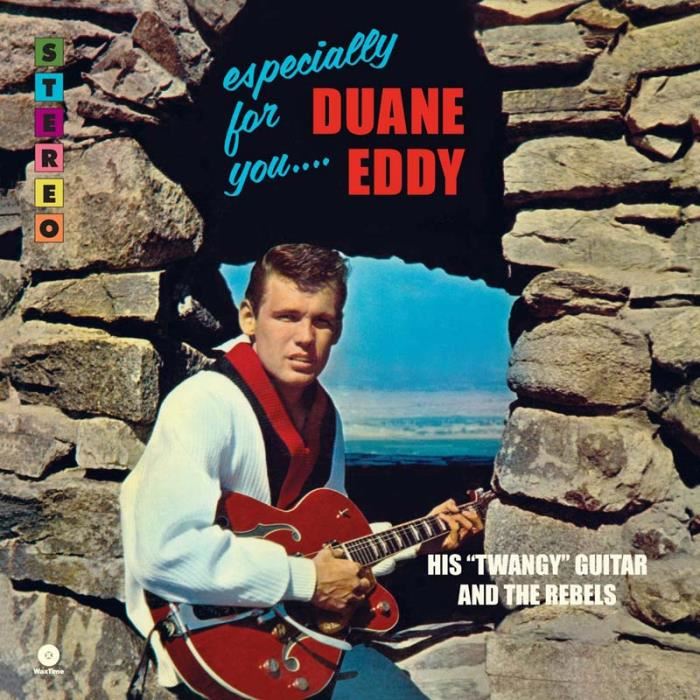 In 2004, Eddy was presented with the Guitar Player Magazine "Legend Award". Eddy was the second recipient of the award, the first being presented to Les Paul. Among those who have acknowledged his influence are George Harrison, Dave Davies, Hank Marvin, the Ventures, John Entwistle, Bruce Springsteen, Adrian Belew, Bill Nelson, Mark Knopfler, and Ben Vaughn. 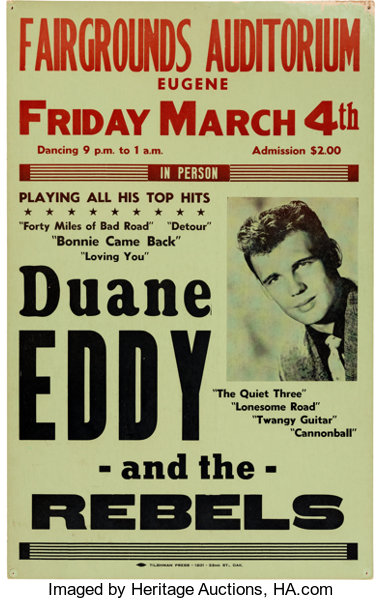 In October 2010, Eddy returned to the UK at a sold out Royal Festival Hall in London. This success prompted the subsequent album for Mad Monkey/EMI, which was produced by Richard Hawley in Sheffield, England. The album, Road Trip, was released on June 20, 2011. Mojo placed the album at number 37 on its list of "Top 50 albums of 2011." Eddy performed at the Glastonbury Festival on June 26, 2011. 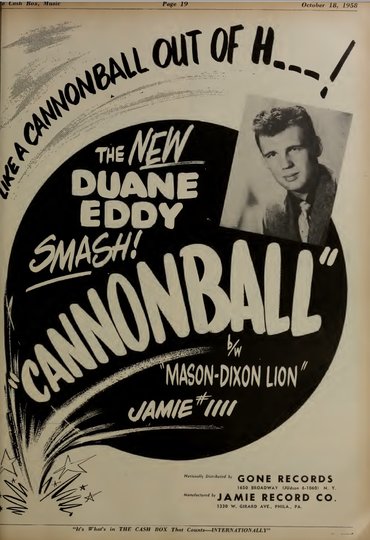 For an 80th birthday tour in 2018, Eddy returned to the U.K. in concerts with Liverpudlian singer-songwriter Robert Vincent, performing on October 23 at the London Palladium,and October 30 at Bridgewater Hall in Manchester
https://en.wikipedia.org/wiki/Duane_Eddy
_________________
We don't care the People Says , Rock 'n' roll is here to stay - Danny & the Juniors - 1958