Undeniably one of Chevrolet’s greatest design achievements of the mid-20th century, the Fleetline may have had a rather short lifespan, but its overwhelming success propelled Chevy to number one in sales each and every year from its four-door Sportsmaster debut in 1941 till the following decade when the DeLuxe two-door made its last appearance on the new-model roster. Obviously, there was a little four-year gap in sales during the second world war, but even though the 1946 Aerosedan was nothing more than a dolled-up carryover from 1942, its streamlined styling was no match for the competition. And even America’s next situation abroad, the Korean conflict, had little effect on production (other than learning what the absence of nickel has on chrome plating) or initial sales. But come 1952 Chevy had scaled down the once multi-model offering to just the one two-door fastback, which in most regions was not available with whitewall tires, a very important option for buyers leading back to 1948 when the stylish rubber had come back into vogue. It would be another decade before the company manufactured another fastback—but despite having an even shorter life, that particular fiberglass model would wind up becoming more iconic than any Fleetline. 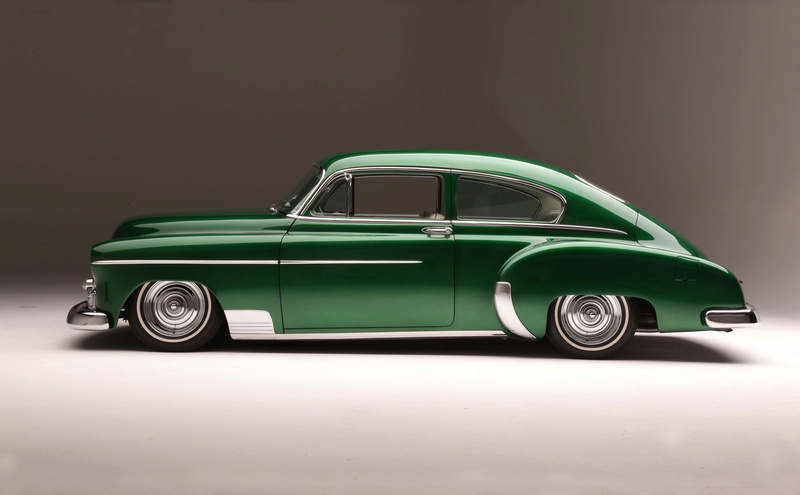 Generally speaking, when it comes to their full-fendered rides (“bombs”), lowriders have always gravitated toward ’30s-’40s Chevys. While the 1939 Master DeLuxe may be the 1932 Ford of lowriding in terms of desirability and clout, the Fleetline has and will always be a cultural icon. And the various model configurations are definitely no strangers to hot rodding and custom makeovers, either—usually, the visual intent is clearly obvious. But then there are mixtures of all three that defy specific categorizing. Is it a lowrider, mild custom, or …? Andy Sapien’s family 1950 DeLuxe two-door sedan is a perfect example of cultures combined—and it answers that question simply by being “just right.” 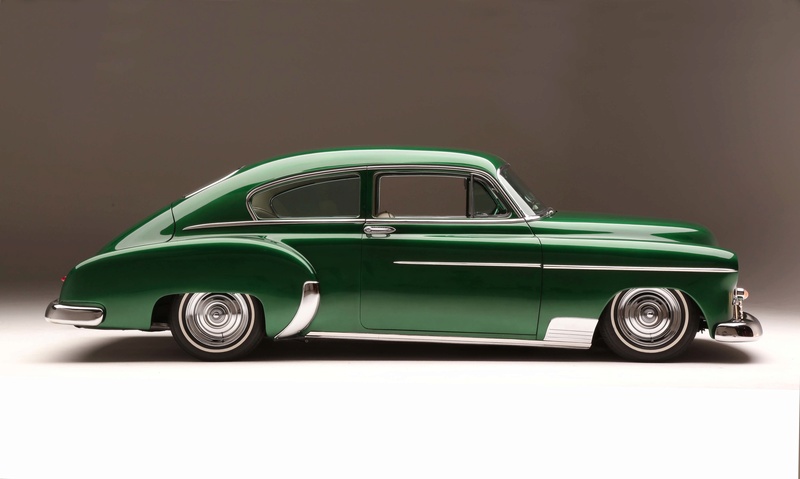 While lowriders are normally very formulaic in specific component nature, the Sapiens’ Fleetline followed just one guideline during its two-year construction phase: It was to be a family affair. As far as the underlying components, theirs is one Fleetline without the familiar rap of an inline-six, as it’s been updated with a V-8 and overdrive trans; while a complete Jaguar IFS outfitted with air springs was substituted for the stock front suspension that is so often hydraulically articulated. The interior is a far cry from its original appearance as well—where once mohair and broadcloth were wrapped and tacked over puffy bench seats now resides T-bird buckets and a handbuilt flat-bottom boat–inspired rear with a custom center console all wrapped in white vinyl with pleated green inserts by Lowrider Industry Hall of Famer Bob Mercado (Mr. Bob & Sons). A dished 1960 Olds steering wheel on a modified 1972 Chevy van column was substituted for the old three-on-the-tree, while a Kenwood/Pioneer sound system (by Rick Vazquez) replaces the antiquated tube radio. 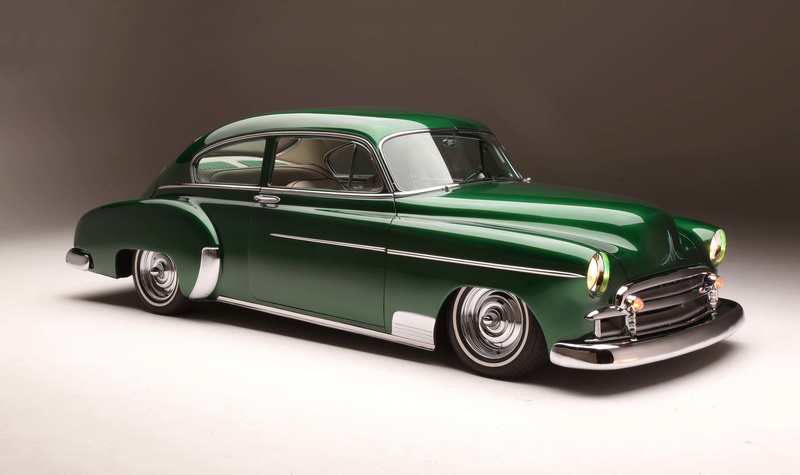 It’s the presentation of the exterior that really sets the tone for the Sapiens’ sedan. Handles and its DeLuxe trim are still present, but gone are the headlight bezels (lights frenched), hood and trunk emblems (nosed and decked), and the taillights altogether (frenched Cadillacs instead), while bumpers are now void of protruding hardware. After Andy’s family had completed the various body mods, Daniel Vasquez finished the Fleetline’s bodywork in preparation for the House of Kolor candy green he applied (a bit of traditional pinstriping on the front and rear ends was added as well). With Shannon cones on chrome reverse wheels, skinny whitewalls, and that nose-down stance, there’s no mistaking this is no traditional lowrider Chevy … it’s simply the Sapiens’ Fleetline, just as Andy and his family intended it to be.
http://www.hotrod.com/articles/sapien-familys-1950-chevy-fleetline/
_________________
We don't care the People Says , Rock 'n' roll is here to stay - Danny & the Juniors - 1958 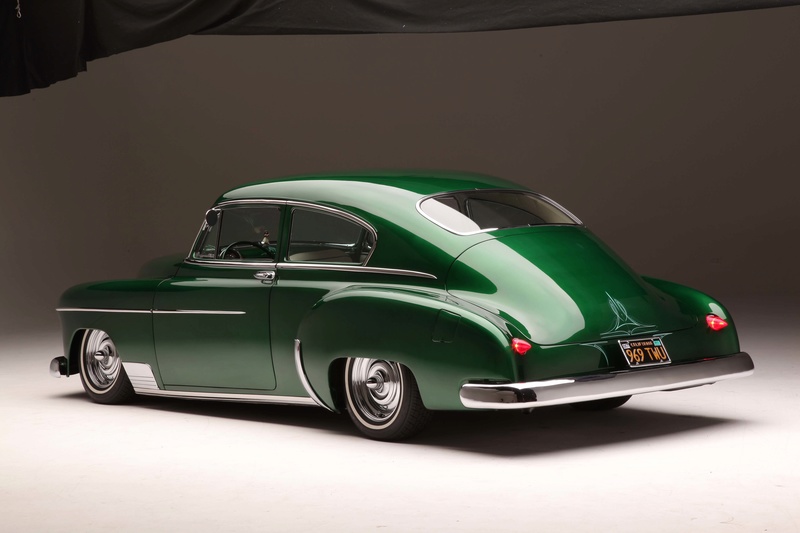 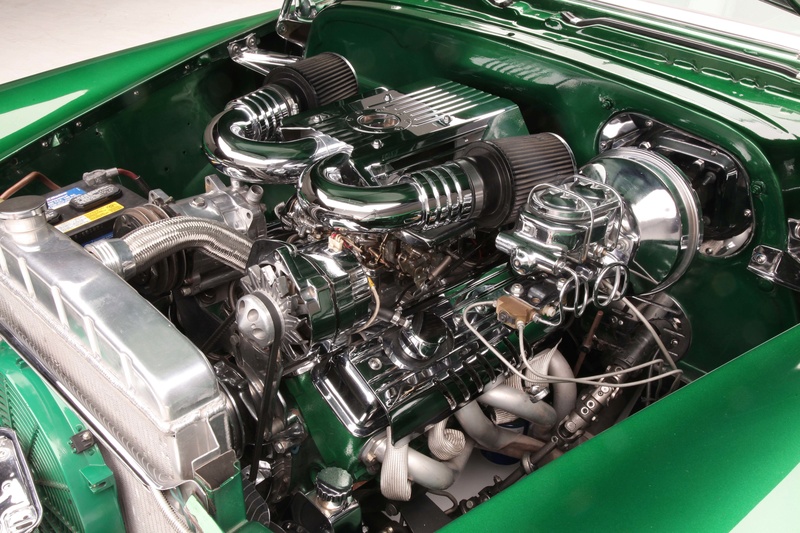 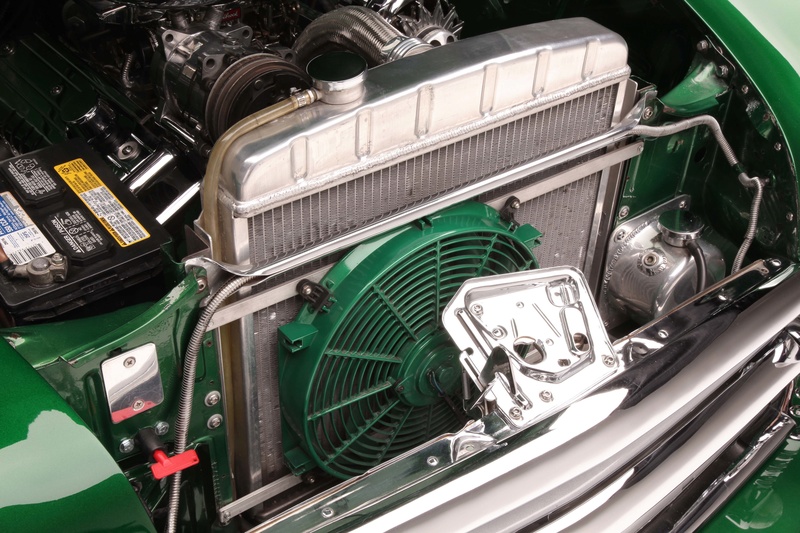 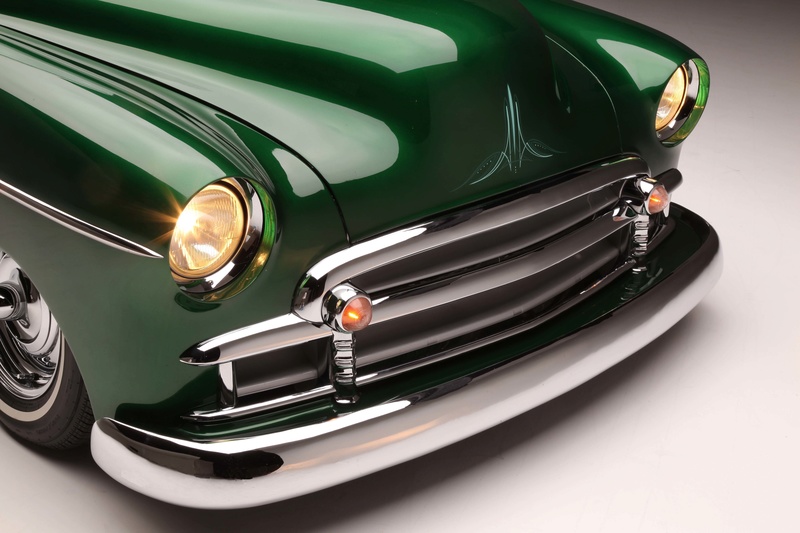 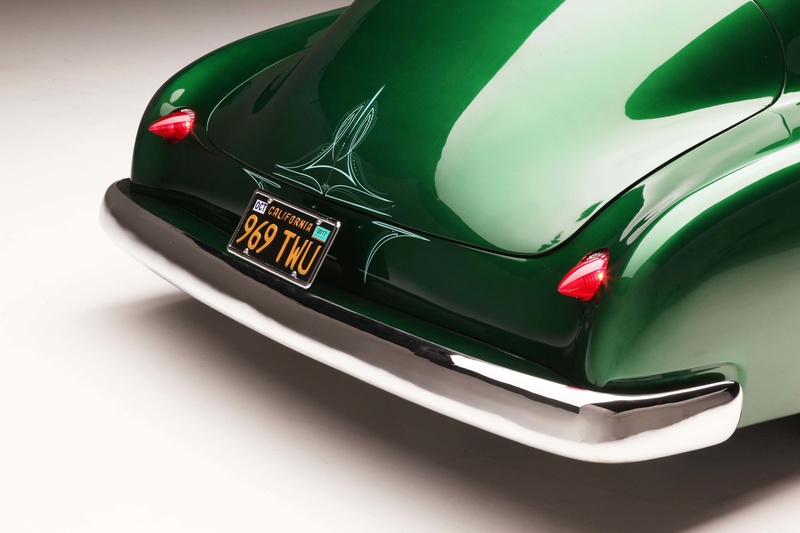 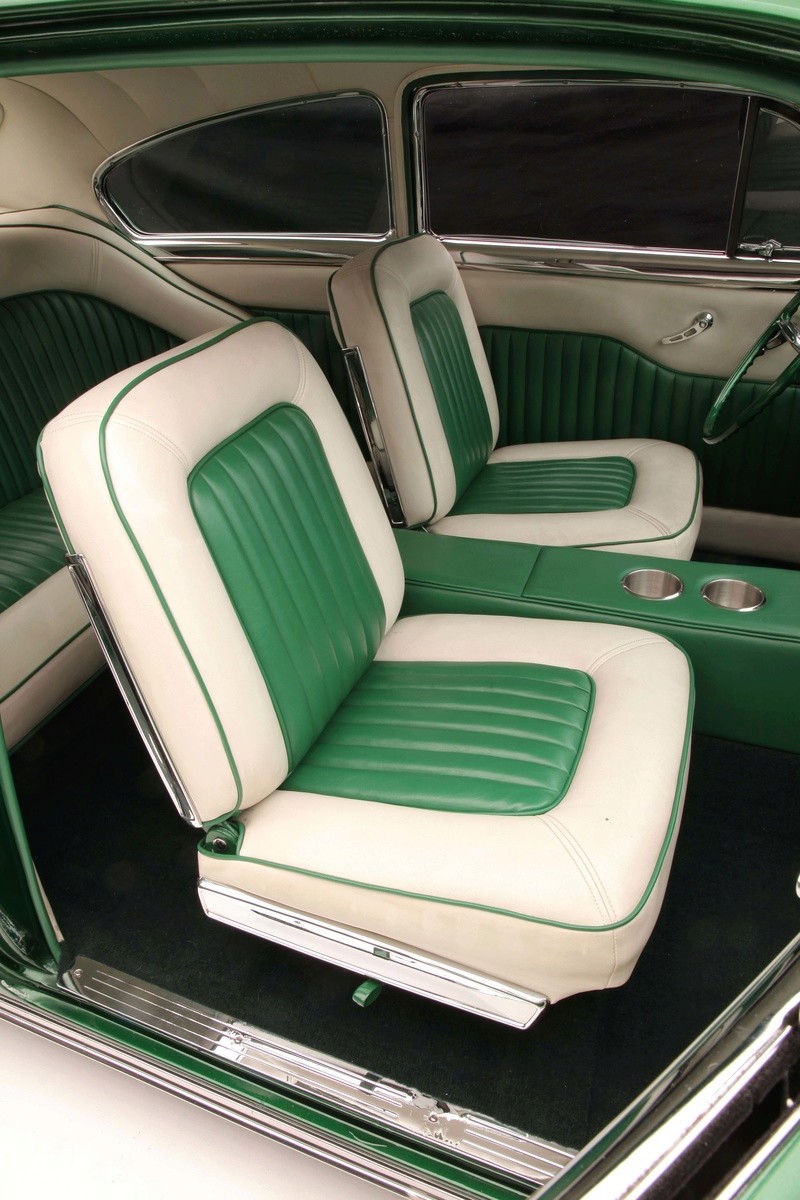 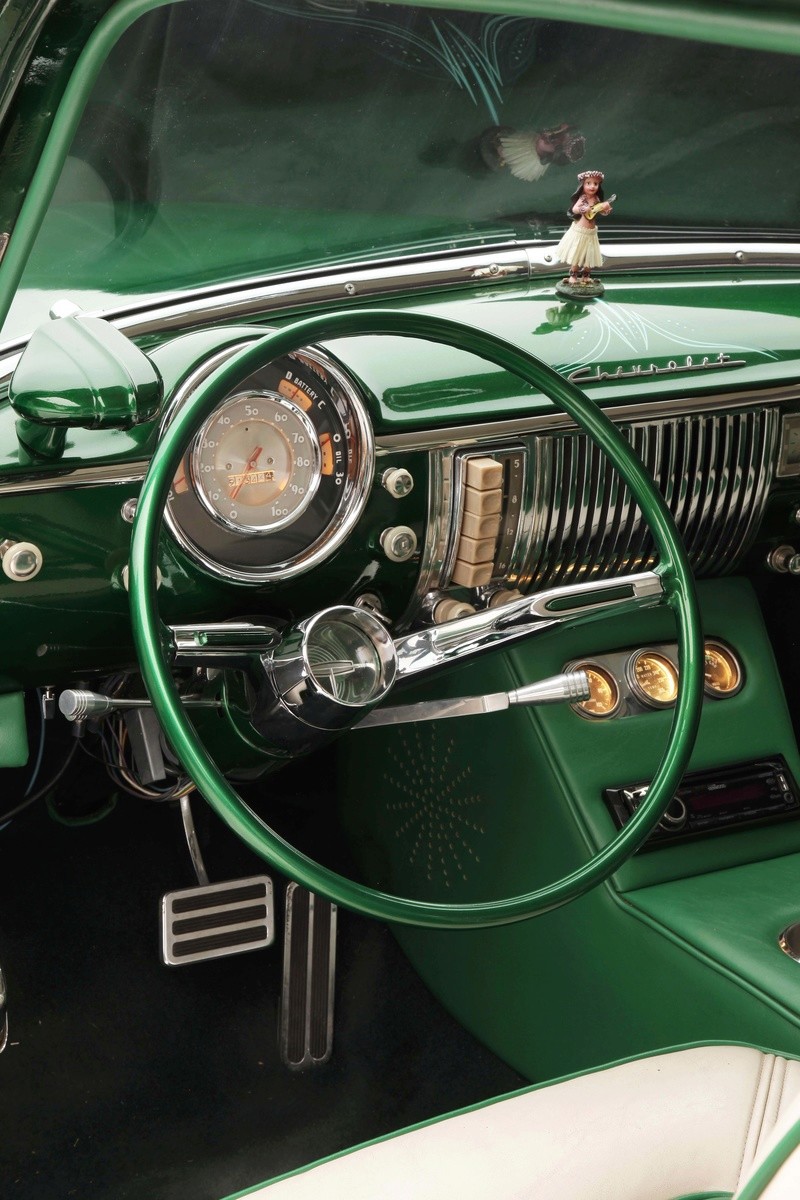 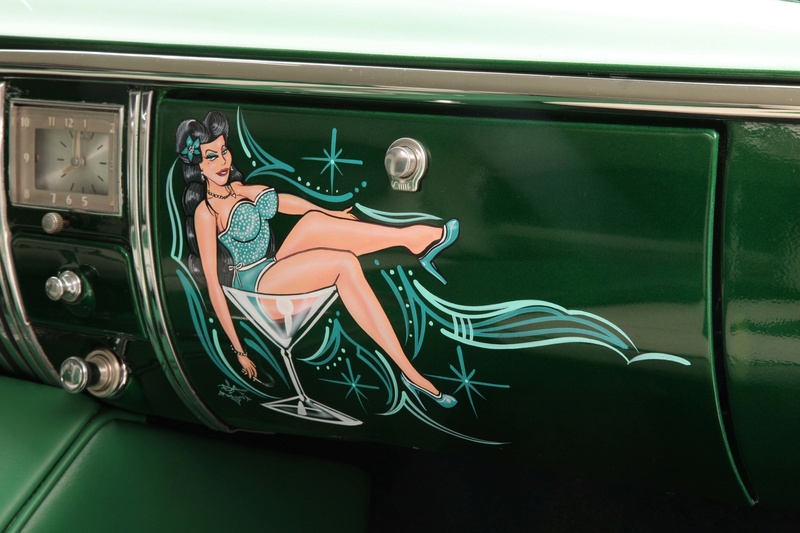 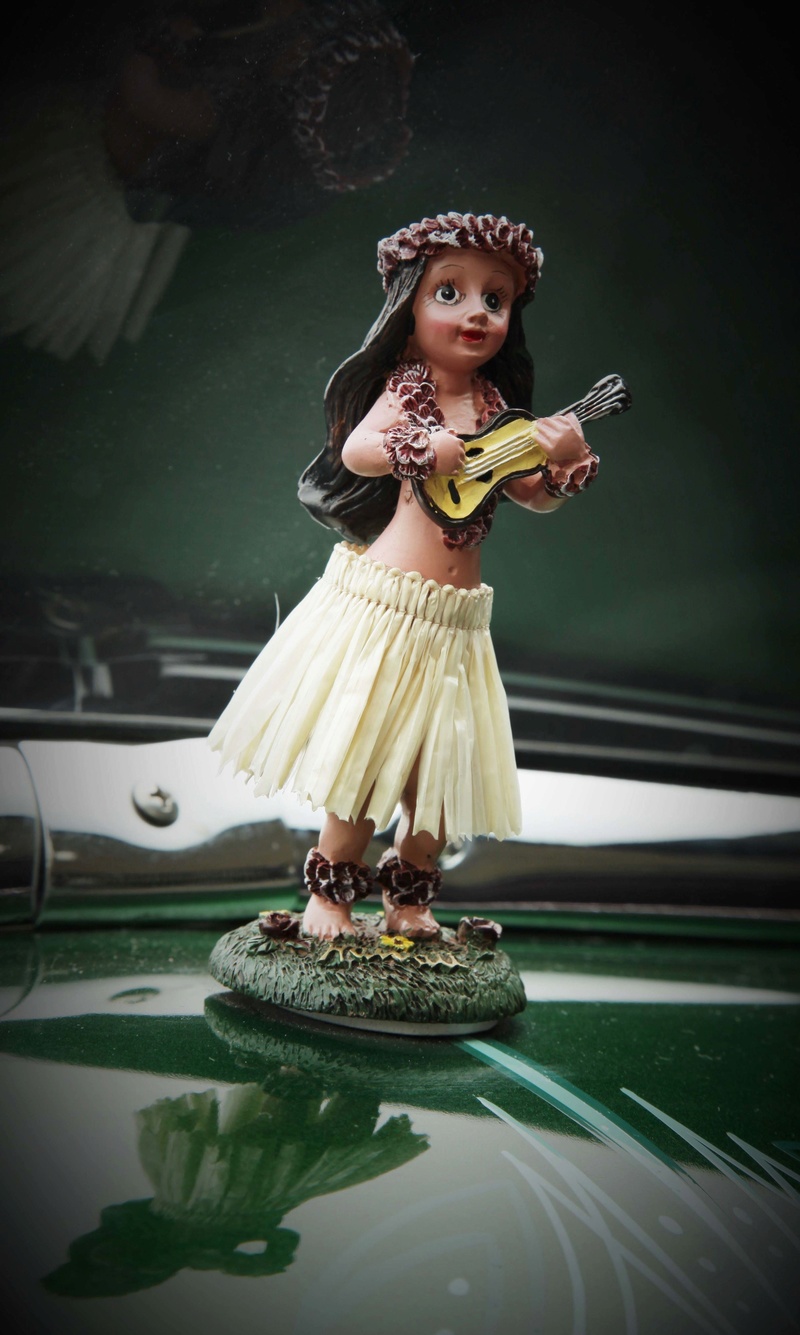 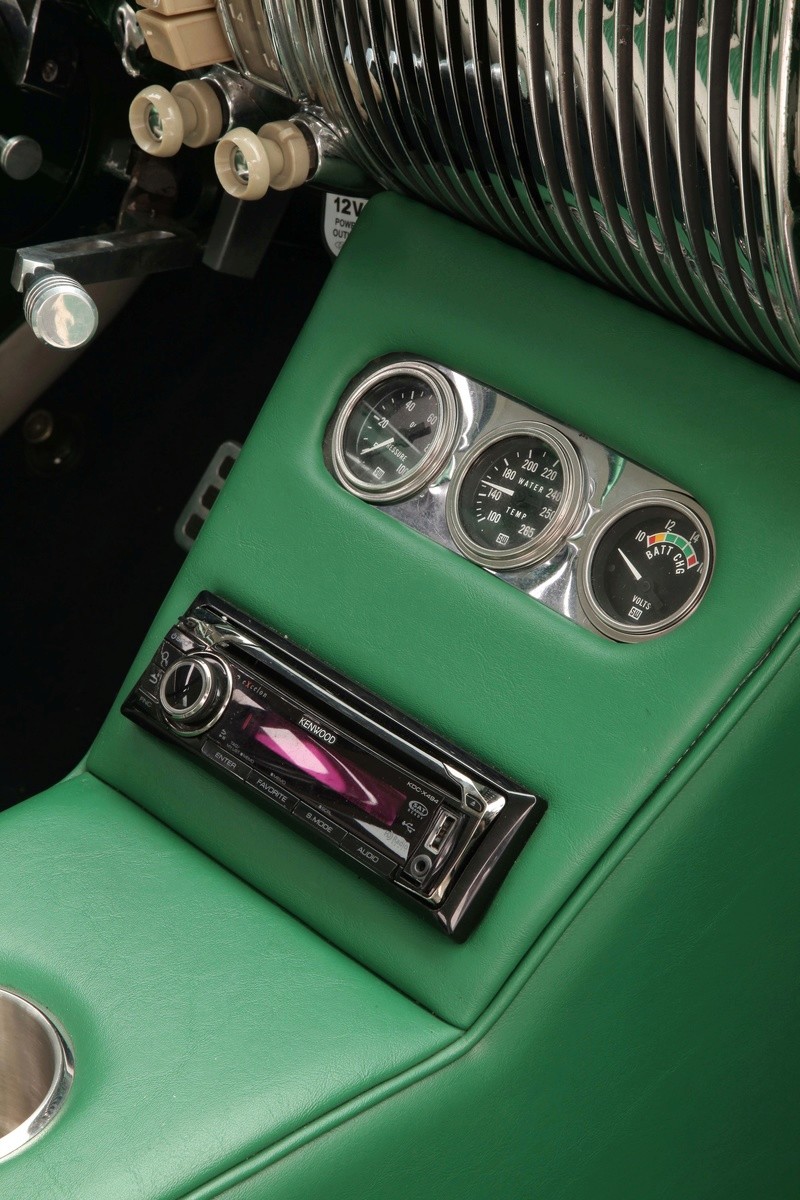 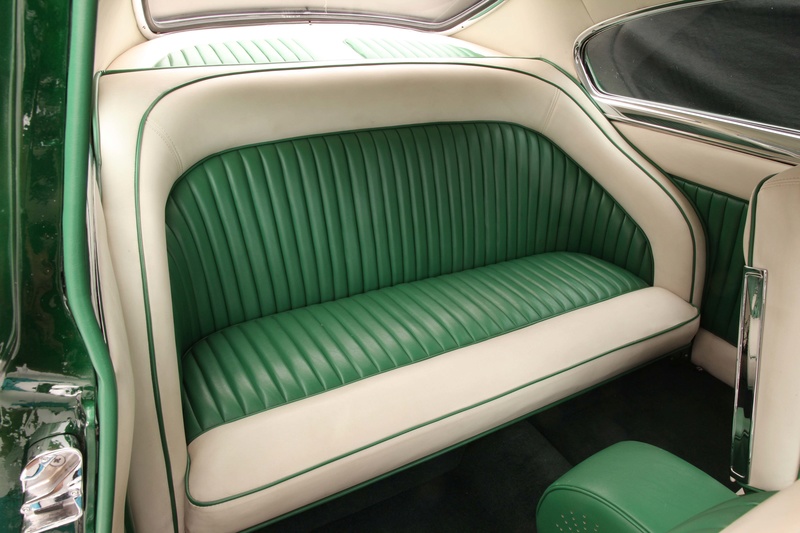 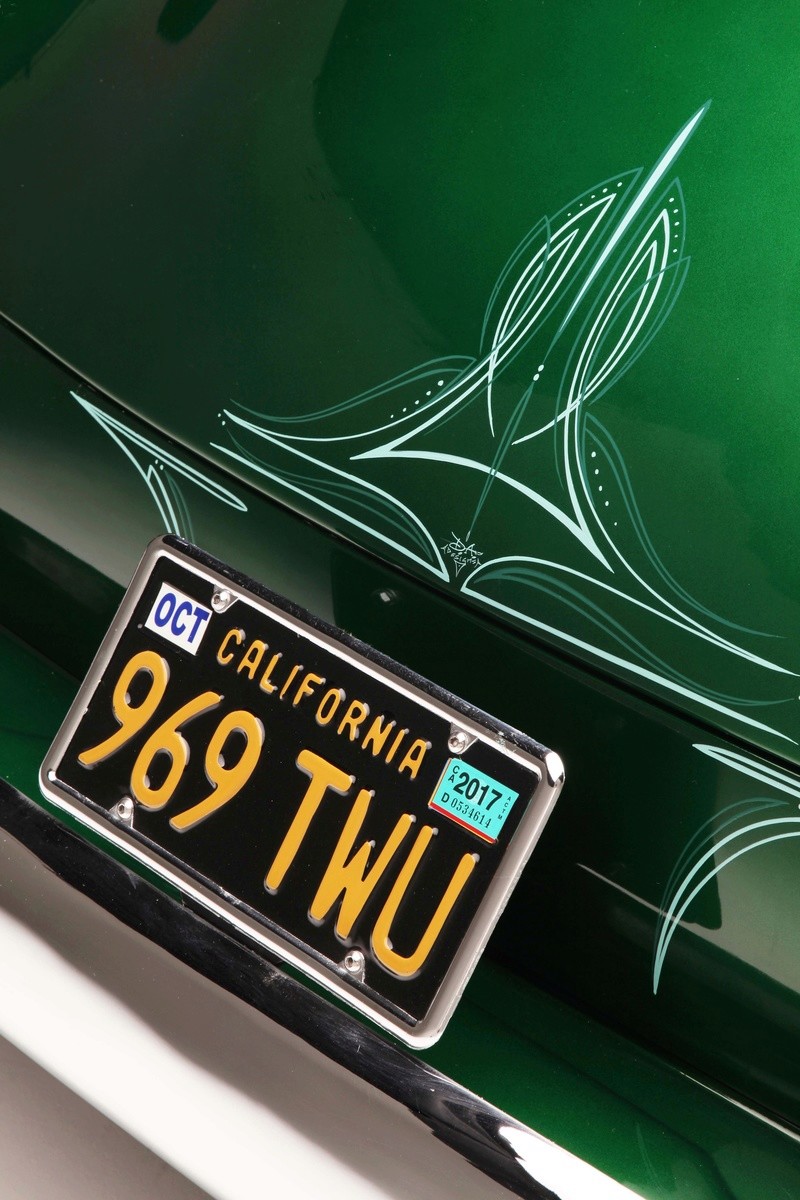 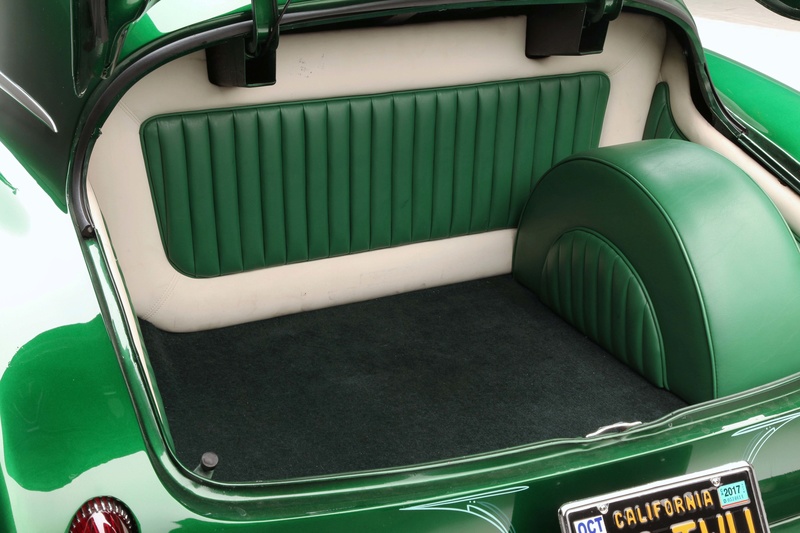