Five Points is a car wash. In Whittier. That looks like it's about to launch into outer space. There ain't much more to say about it than that. 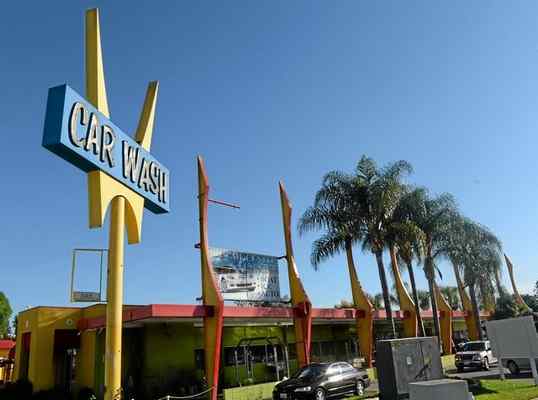 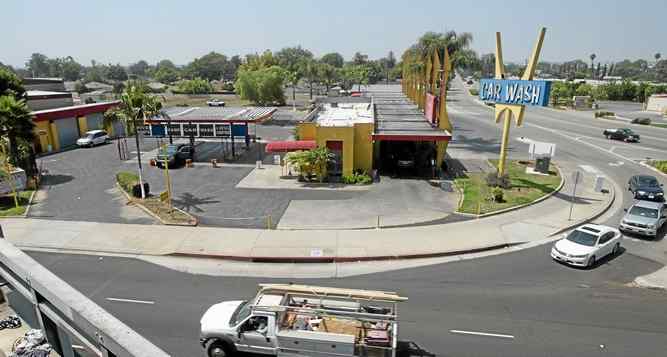 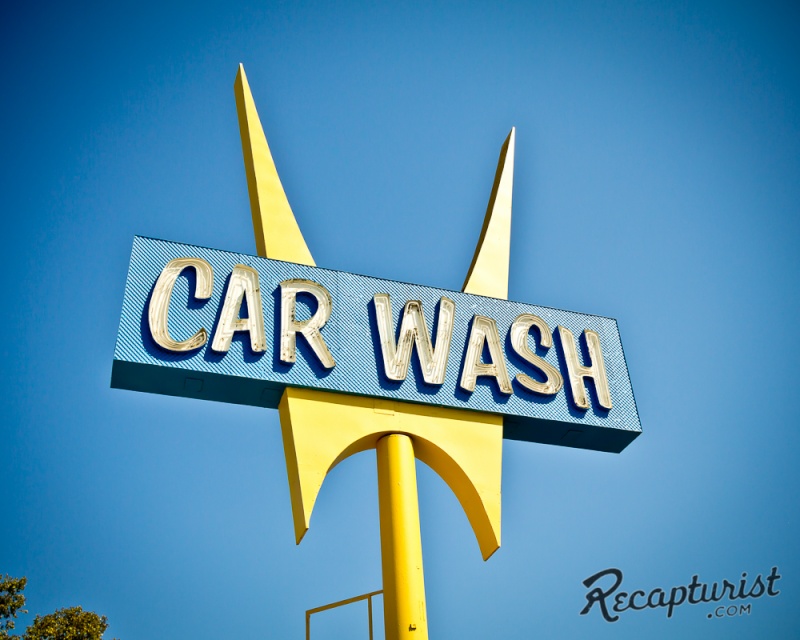 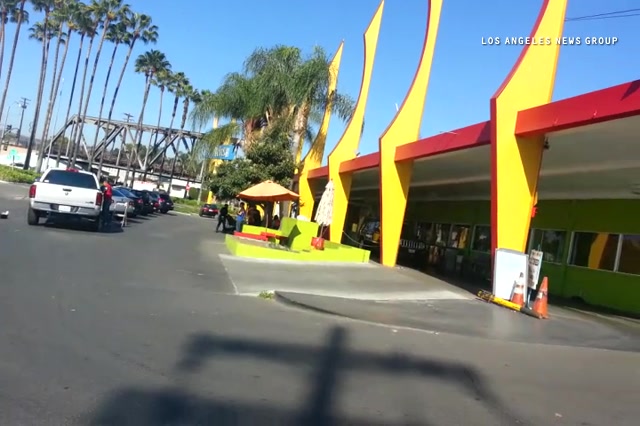 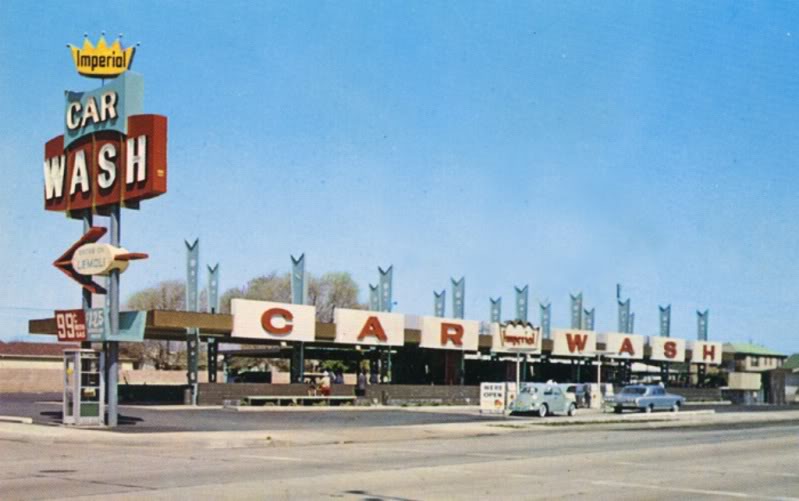 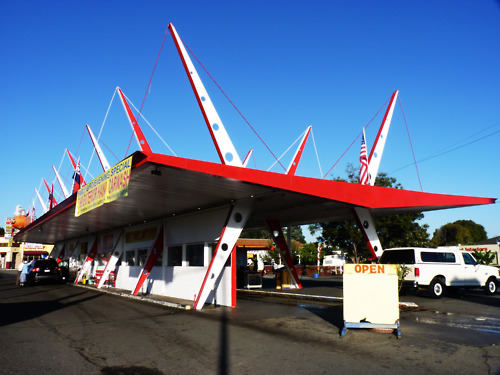 Googie-style car wash on El Camino Real in Santa Clara, CA. The roof is supported by a succession of steel boomerangs with ornamental swiss cheese holes 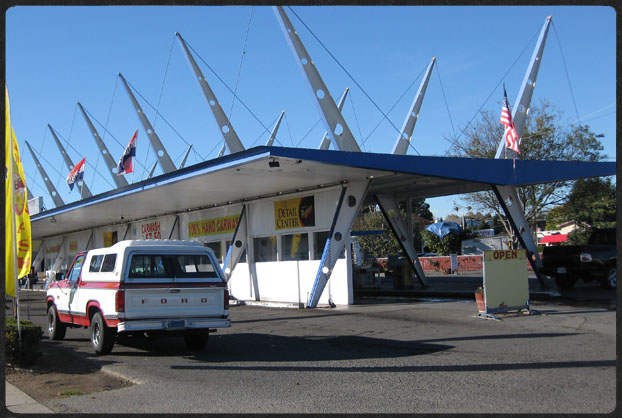 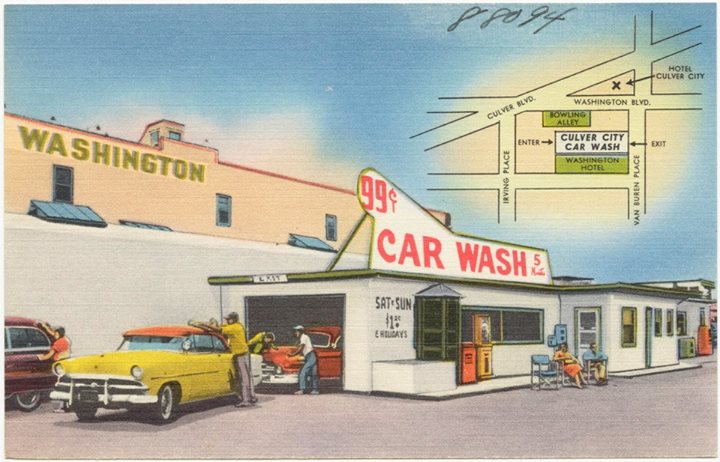 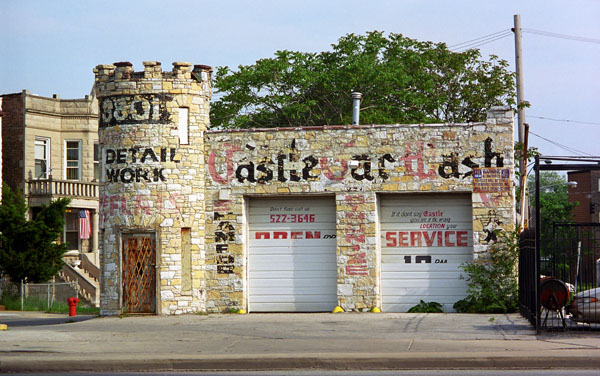 Significance: Castle Car Wash was built in 1925 and is the last remaining historic gas station structure on Route 66 (Ogden Avenue) in the city limits. Chicago was the eastern terminus of Route 66. Originally Murphy's Filling Station, the building stopped functioning as a filling station in 1966 and later became a car wash. The Route 66 Corridor Preservation Program of the National Park Service recognizes this building, with its unique castle design, as one-of-a-kind along the roadway and in April of 2005, the building was determined eligible for listing in the National Register of Historic Places. 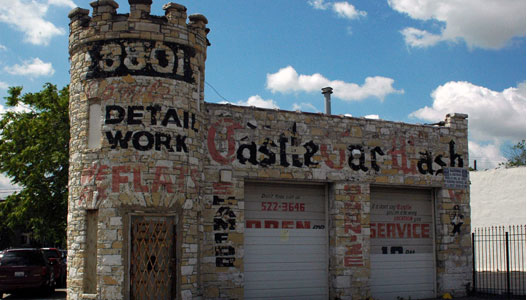 Current Condition and/or Status: Castle Car Wash is currently owned by a towing company and is vacant and minimally maintained. In early 2008, due to safety violations, the owner removed the distinctive crenellation at the top of the tower. Castle Car Wash is indicative of a disappearing building type – the uniquely designed early-20th century filling station. 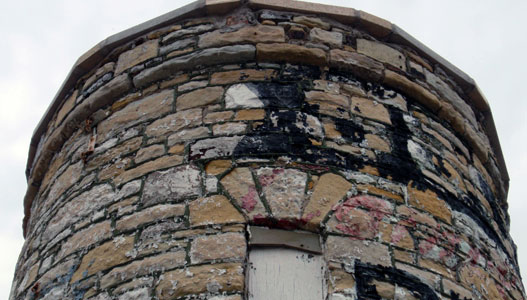 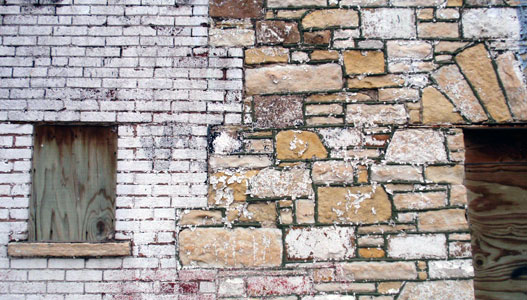 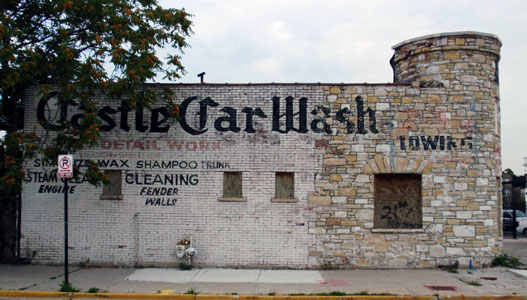 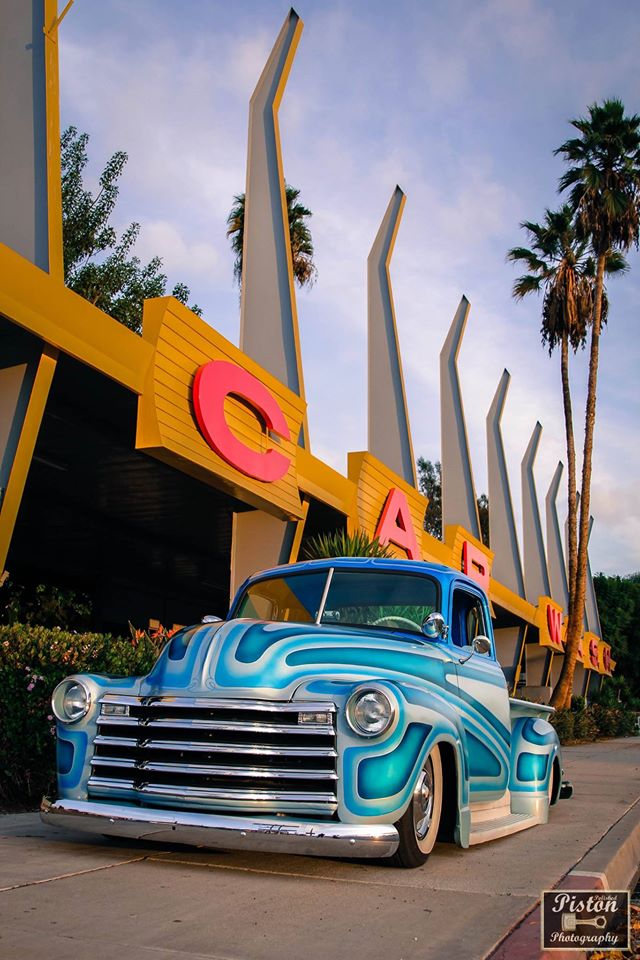 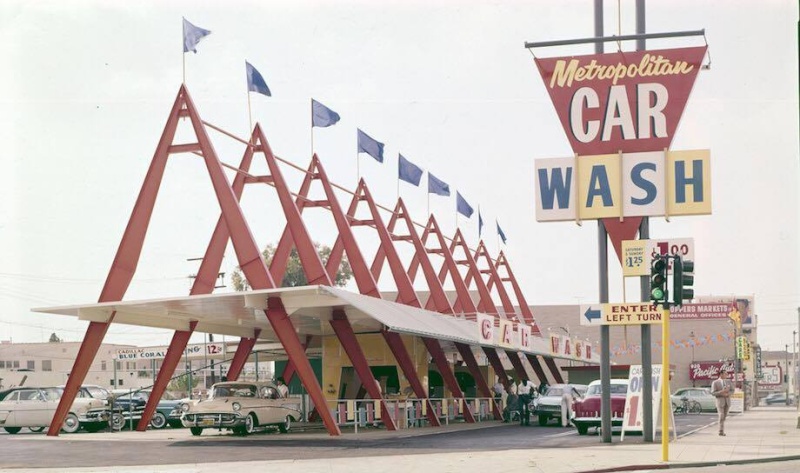 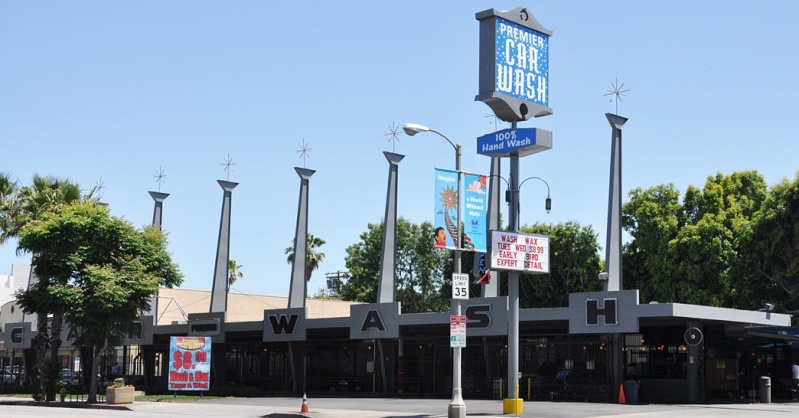 Premier is a car wash. In Encino. That looks like it's about to explode. There ain't much more to say about it than that. 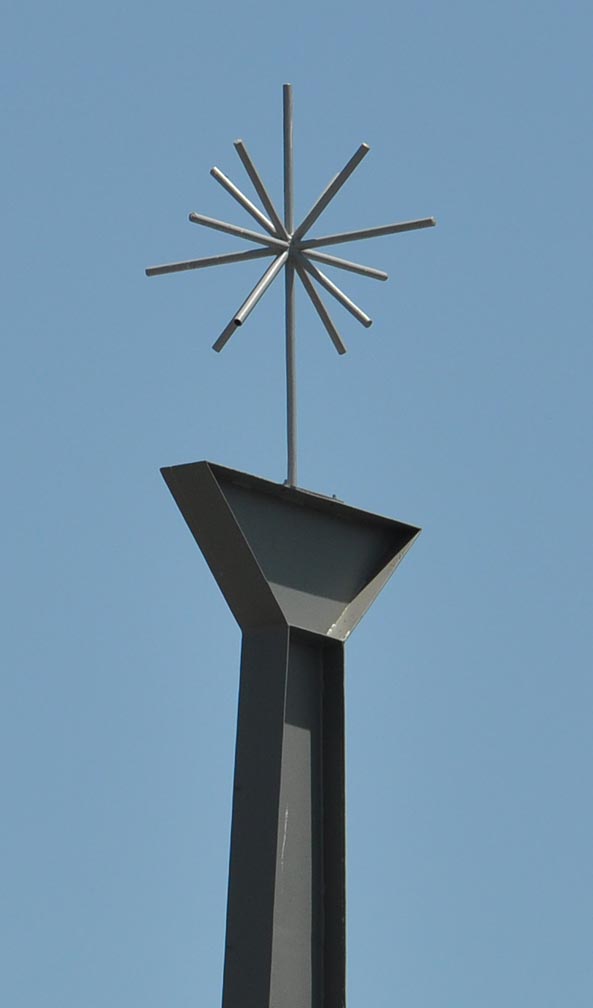 The Premier Car Wash was built in 1966. It was originally known as the Auto Laundry 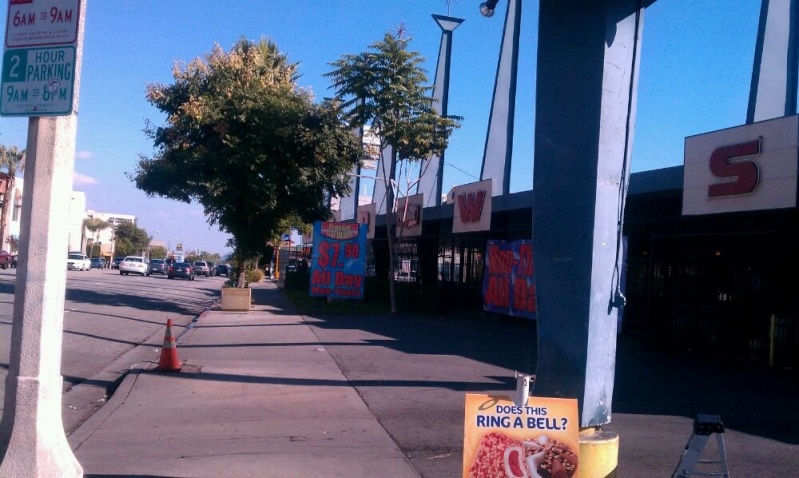 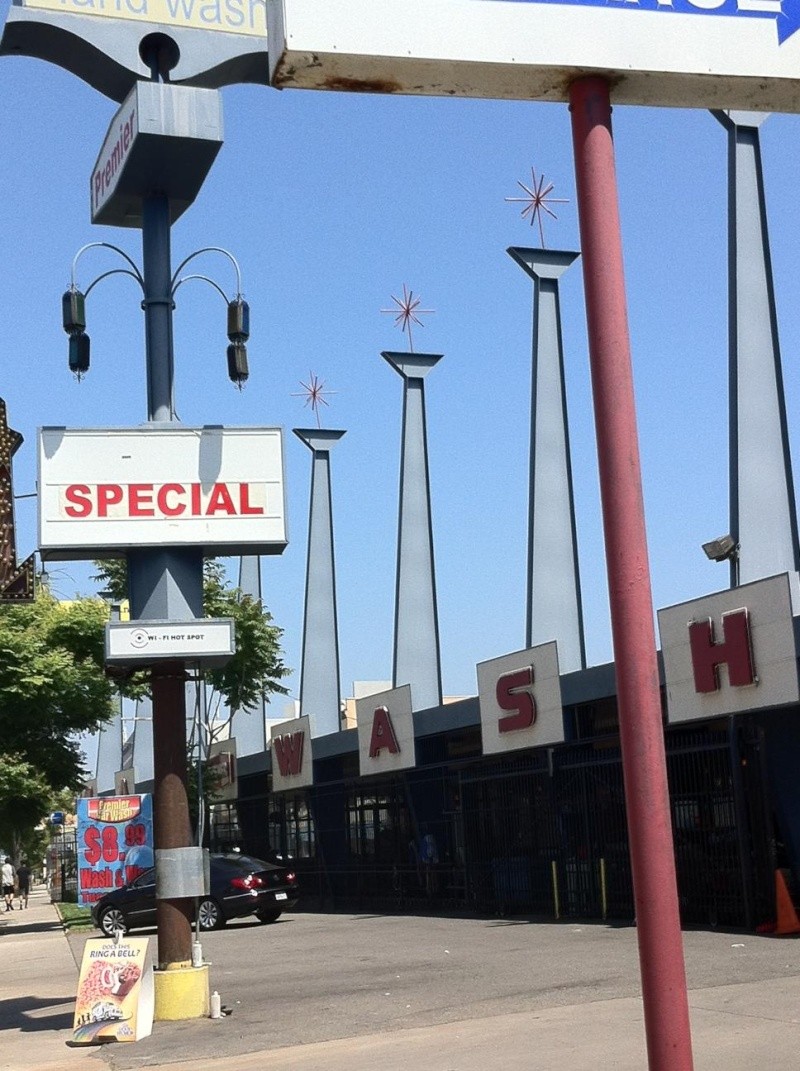 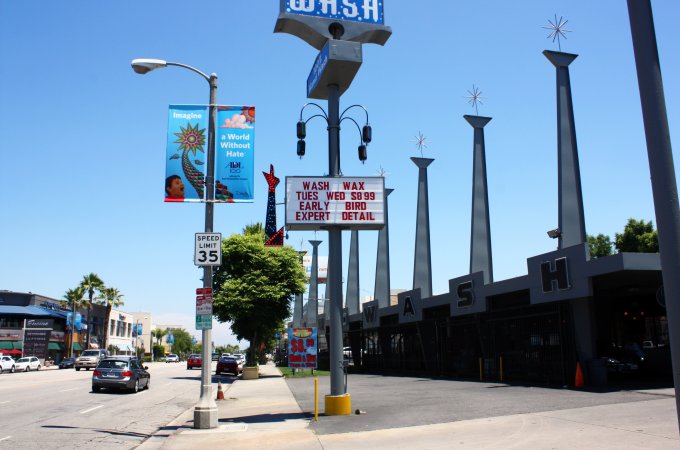 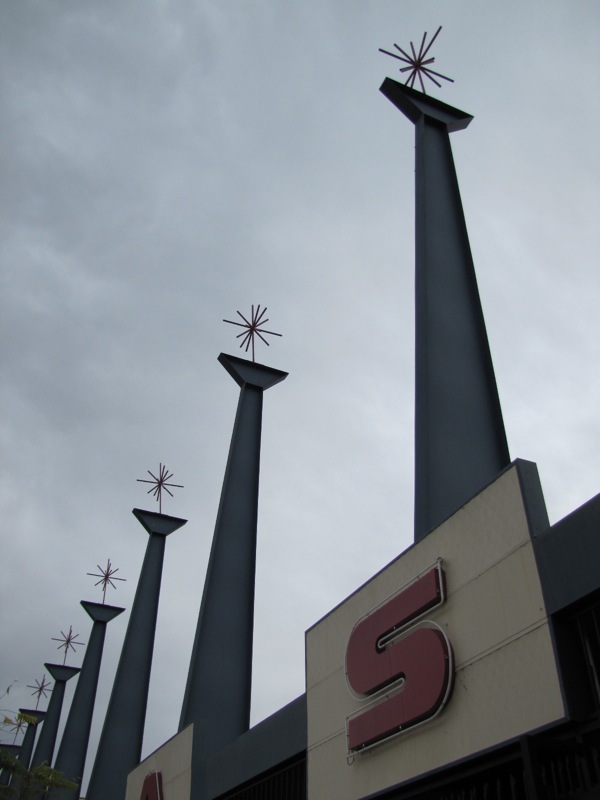 The Googie-style car wash is a fairly common building type across Los Angeles, but few of them retain their spectacular original details like this Encino specimen. Designed by an unknown architect for owners Mandel, Helfing, and Lash and completed in 1966, the car wash at 17438 Ventura Boulevard was originally known as the Auto Laundry. 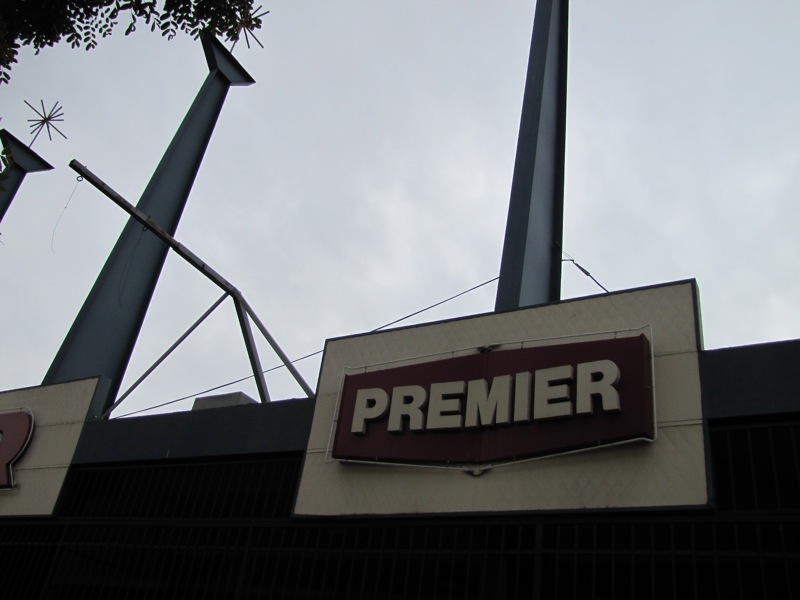 It features a flat roof with wide overhanging eaves sheltering the actual washing process as well as spaces for a customer waiting room and cashier area. The building is a simple steel affair, with its robust framework serving as decoration as well as structural support. The roof is supported and pierced by enormous vertical, angular steel beams that shoot up into the air, each topped by an inverted triangle holding aloft a three-dimensional atomic starburst. 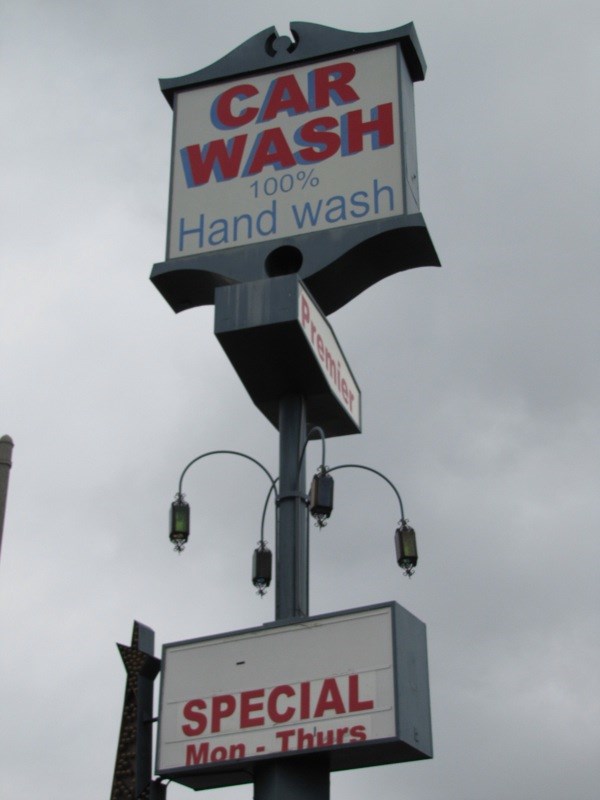 The mere shape of the building advertises it as a car wash, and the starburst-crowned vertical beams cannot fail to draw the eye. But just to make sure, massive signage also spells out C-A-R-[PREMIER]-W-A-S-H along the edge of the low metal roof. An additional vertical pole sign stands tall on the street to announce the presence of the business. If you had to choose one Googie car wash along Ventura as your favorite, this one wouldn't be the only option—but it might just be the best. 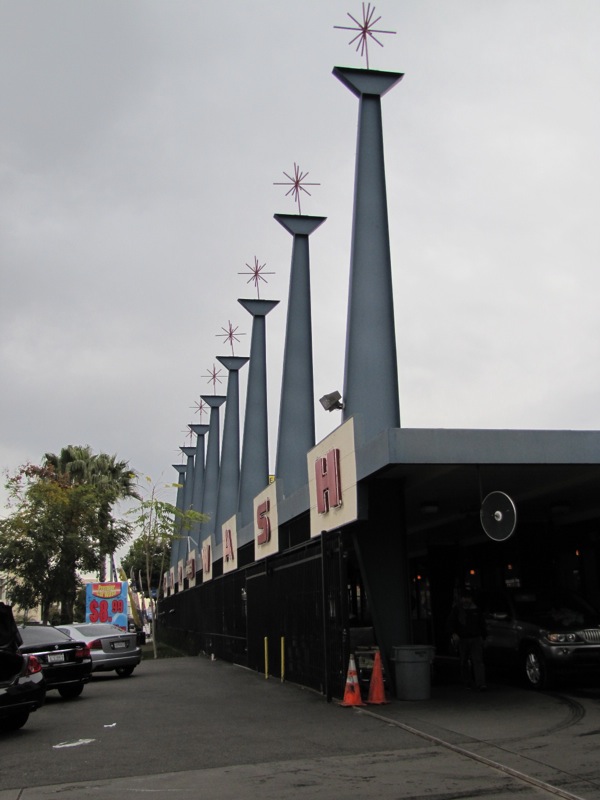 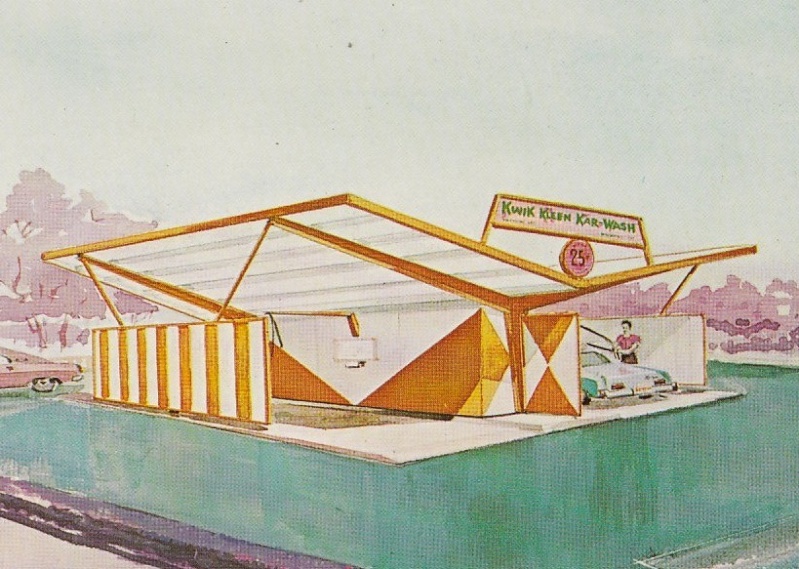