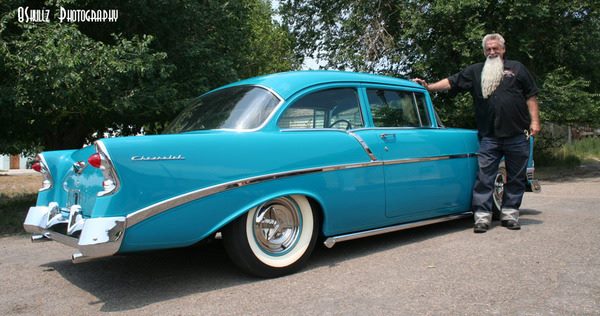 DRAGERTON - Bo Huff (Gerald Douglas Huff), 72, passed away at his home in Dragerton on August 4, 2015 after a 5 year battle of cancer (multiple myeloma).
He was born March 12, 1943 in Clarksville, AR to Junior Gervis and Corene Crossno Huff.
Bo is survived by his companion Monique Wood, his sister Carolyn (Chuck) Abeyta, Dragerton, UT; seven children, Lisa (Ron) Weeks, Apex, NC, Michelle (Sean) Madole, Washoe Valley, NV, Amy (Paul) Pickering, Tunbridge, VT, Kendall Smith, Dragerton, UT, James Huff, Draper, UT, Madeleine Huff, Dragerton, UT, Junior Huff, Dragerton, UT; nine grandchildren, Anthony & Jessica Weeks, Apex, NC, Michael, Ryan & Isabelle Madole, Washoe Valley, NV, Max & Juna Valdez, Dragerton, UT, and Johnnie & Corene Huff, Dragerton, UT; and dozens of other relatives and loved ones that have made such an impact on him throughout his life.
Bo’s family moved from Arkansas to Dragerton to find work in the coal mines in 1951. He first took an interest in cars after watching the older guys in town with their lowered down cars. This turned in to the obsession that lasted a lifetime.
Bo was a world famous custom car builder who has won numerous awards at prestigious car shows. He was an avid member of the Dead Sleds Car Club. Bo was inducted into the National Rod & Custom Hall of Fame and the Kustom Kemps of America Hall of Fame for his life’s work.
Bo went to Denver, CO in the early 60’s to attend a body and fender school. After working in Salt Lake for a few years he moved to Southern California and opened his first custom paint shop. There he made a reputation for his superior artistry. During the 70’s he toured the country and ended up in Arkansas. In the early 80’s he opened a custom car shop in Lincoln, AR. He then moved back to Dragerton and worked in the coalmine where his father had worked for 23 years. After awhile he decided coalmining wasn’t for him and opened a custom car shop in Sunnyside where his shop is still in operation.
Bo was preceded in death by his sister Ada Jean Huff, and his parents Junior Gervis and Corene Crossno Huff.
We would like to thank the Huntsman and the University of Utah Hospital for all of their care during his battle with cancer.
Funeral services will be held at the Sunnyside Park in Sunnyside, Utah on Saturday, August 8, 2015 at 10:00 a.m. A visitation will be held at Mitchell Funeral Home (233 East Main Street) in Price on Friday from 6:00-8:00 p.m. and at the Park Saturday one hour prior to services. Bo will be buried at the Valley View Cemetery next to his parents. Arrangements entrusted to Mitchell Funeral Home of Price where friends are always welcome daily and may share memories of Bo online at www.mitchellfuneralhome.net

Strictly an original, the legendary Bo Huff has been customizing cars and throwing vintage car show shindigs (always with the appropriate accompanying live music: rockabilly) for 16 years now. This winner of one of the nation’s longest running and most prestigious car shows,  Grand National Roadster Show, operates out of East Carbon, Utah—close to where his automotive tinkering began in the ’50s. His annual events in East Carbon, and the more sporadic shows put on in southern Calif., have always been successful and, in recent years, have grown more popular. If you haven’t heard of him until now, that just means you’re not spending nearly enough time in the right kind of garages where pin-striping, hot rods and rockabilly can all be found.
To call a Bo Huff custom a “car” would be like calling Van Gogh’s Starry Night some swirls of paint. His finished products are rolling works of art. They seem to be the reason that the term “hot rod” was created. Selling his cars at a premium price, Bo Huff has worked with clients and sold cars all over the world, shipping them as far as Japan. His early career would lead him to move to southern Calif., and then to Ark., but his interest in cars was sparked as a teen living in East Carbon in the ’50s. 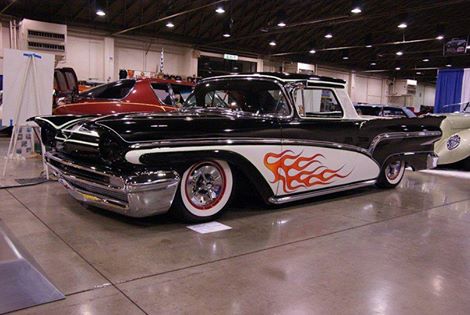 “[East Carbon] was a coal-mining camp, and I used to see guys go by on their tail-draggers,” says Bo Huff. “They were lowering them to the ground with leg pipes and spot lights, and I thought it was cool. Then I found some of those small hot rod magazines that were around in the ’50s, and that was it for me.” 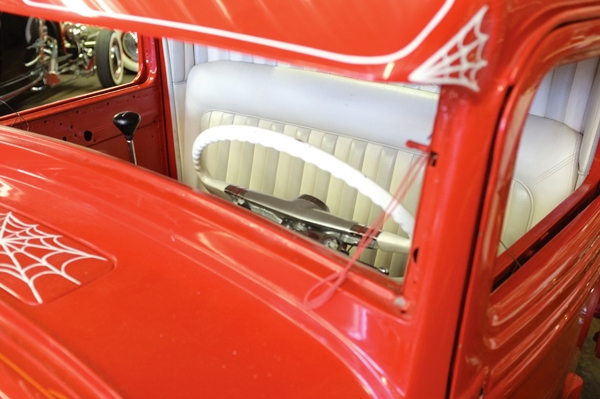 Eventually, Bo Huff went to school in Denver at a general training institute and met Stan Robles, who had worked for George Barris, the famous customizer behind the ’60s Batmobile and the Munsters’ cars. “I loved watching Stan paint cars, and he was who really showed me what was possible,” says Bo Huff.
Although he’s tried his hand at many different facets of automotive work—collision repair, paint, engine work­­—Bo Huff’s true automotive passion is for the cars that came out of the ’50s, that gave birth to the hot rods that have kept him going. He has made it to a point in his career where he can survive solely by building ’50s hot rods, customizing his career to revolve around projects for which he truly has passion.
“They all look the same to me, there’s no design,” says Bo Huff of newer models. “For me, [a car] better have wide white walls and steel wheels, and when I lower a car, it has to sit proper.”
Bo Huff and other customizers retain a certain gift: They can see originality in something as commonplace as a car, and have clear visions of its potential before they have even laid a hand on it. 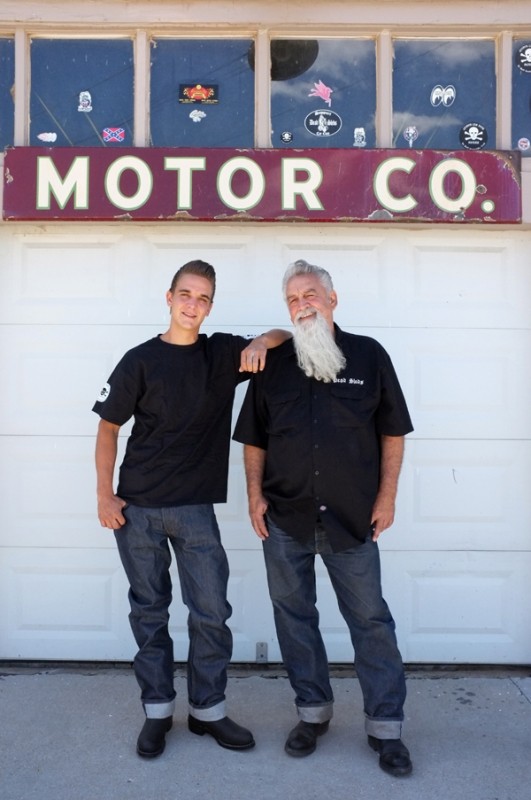 “When I see an older car, my mind will immediately go, ‘I wonder what it would look like if I did this or if I changed that,’” says Bo Huff. “I’ve put fins on a car and stood back and looked at it, and an inch one way or the other will be perfect or completely wrong.”
A quick tour around Bo Huff’s shop reveals the eight or nine projects he keeps going at all times—including a ’36 Ford that he’s slowly giving new life and a ’39 Mercury that he’s been working on for 20-plus years that he feels might be the car he’s remembered for when he gets it just right.
Bo Huff has passed his fervor for car customizing on to his son, known as Junior Huff. While working with his father, Junior has begun to make a name for himself, gaining notoriety in various magazines for his paint work and pin-striping. According to Bo Huff, Junior has also been doing “a hell of a job” on recent customizing and body work.
“It’s kind of an ego trip to have him because he’s a really good pin-striper, and he could be working anywhere,” says Bo Huff. “I think that [we] make a good team. I can tell him what I’m thinking about doing, and he just gets it.”
Before becoming a family man, Bo Huff’s teenage wanderlust lead him to skip school to check out Salt Lake, which he recalls being a major hotspot for both of his main teenage interests: girls and cars.
“Salt Lake had the prettiest girls. Salt Lake in the ’50s had [not] hundreds of cars, [but] thousands, and they never got the credit they deserved because there were so many hot rods on the West Coast, and the guys that wrote the books and took the pictures never ventured out and saw what was happening on State Street or in Liberty Park,” says Bo Huff. “They used to drag their cars so low that sparks would be flying out from underneath, and the thing was, if you had a pretty car, you’d get the pretty girls.”
Of course, where there are girls and cars, rock n’ roll is sure to be found. Bo Huff took to rock n’ roll and journeyed with it. Although it took him to some unexpected places, he was always able to know the real thing when he heard it.
“In 1955 on Halloween night, I heard my first rock n’ roll song, ‘Rock Around the Clock’ by Bill Haley and the Comets, and I can still remember thinking, ‘What is it? I like this,’” he says. 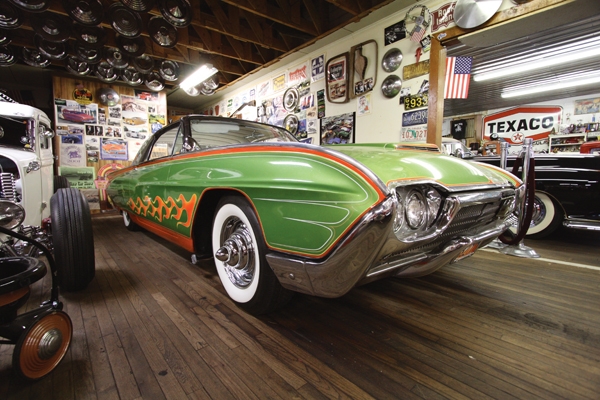 One year later, Elvis would gain nationwide popularity and the rock n’ roll craze would be in full swing. Bo Huff loved early rock n’ roll music, but when that music became scarce, he had to take what he could get from the likes of The Beatles and Jimi Hendrix, even though he says he had to put up with a lot of bullshit to get to the good stuff. In the late ’80s, rockabilly as a subculture began to take off, and once Bo Huff got wind of what was going on, it was natural for him to be a part of it.
“I can’t tell you how many of my own radios I’ve busted over the years because I walk in and hear this shit music coming out of them,” says Bo Huff. “You can’t reach back and try giving new life to something from the ’50s or earlier with Guns N’ Roses in your ear. At least that’s not the way I want to do it. I want to feel that time and the attitudes and the spirit of it all and put that into the car I’m working on.”
With his love of music and cars, it only seemed natural to bring it all together into an event that showcases the best aspects of the lifestyle Bo Huff so ardently believes in. After becoming well-known in the hot rod world, it was Bo Huff’s friends who suggested that he put together a car show over 16 years ago.
“It was unreal how many people showed up the first time. You could look down the road and both sides were filled with cars. I’ve had a lot of success with my shows, and when I started my annual event here in East Carbon, it became so big that the city came to me and wanted to incorporate my show into their community days,” says Bo Huff.
Bo Huff’s Family Fun Rockabilly Car Show is now held annually in conjunction with the East Carbon Community Daze on the second weekend in July. The show features over 300 vintage cars, rockabilly bands, pin-up contests and more.
While he welcomes all to his events, he’s not shy about letting anyone know his opinion on what a car should look like: “What’s going to keep my interest is the younger rockabilly guys and what they’re doing and how that scene is growing. I can put on a show in Calif. in the right spot and 2,000 cars will show up, and seeing what some 20-year-old kid has come up with is what’s going to keep me going,” he says.
At the heart of it all, Bo Huff is all about the hot rods he builds because he loves it. He listens to rockabilly music because that’s what he likes. He has customized a lifestyle that fits everything that he’s passionate about, and because of that passion, he’s found success. This July 13-14, Bo Huff’s Family Fun Rockabilly Car Show will be going off like a rocket in East Carbon, Utah, check out facebook.com/bohuffcustomcars or shopbohuffcustoms.com for details. The man himself says, “You’ll come for the show, you’ll leave feeling like family.”
http://www.slugmag.com/lifestyle/a-custom-lifestyle/ 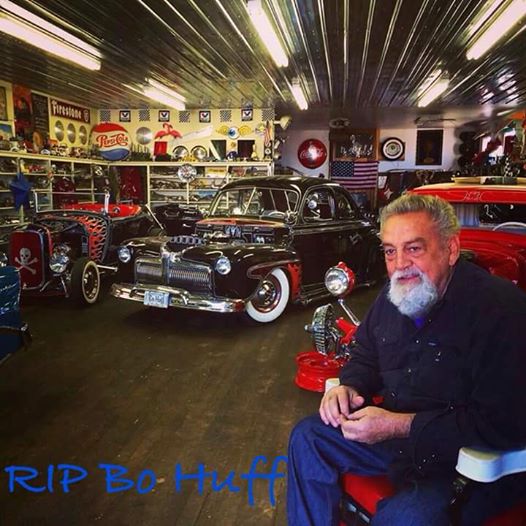 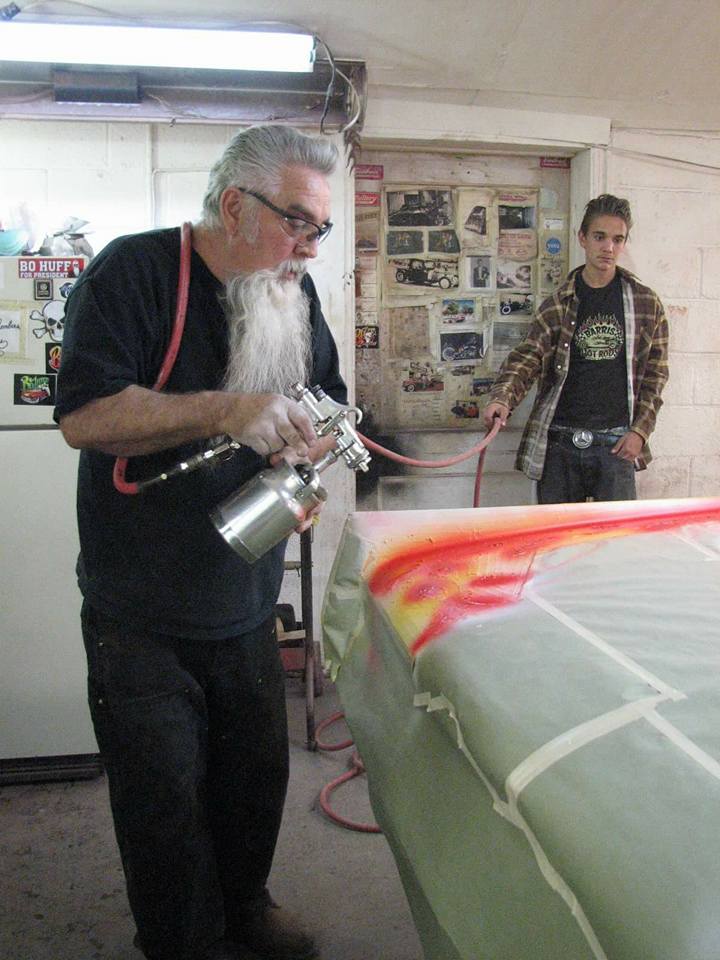 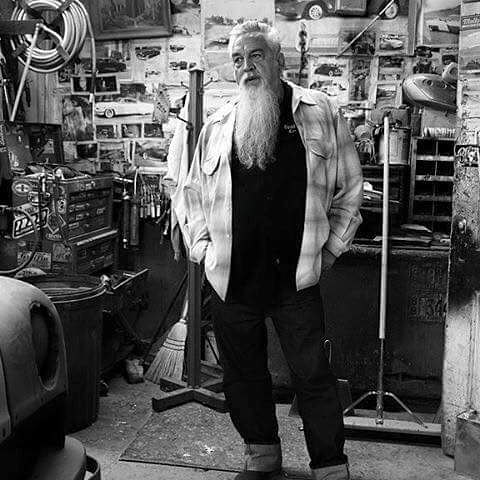 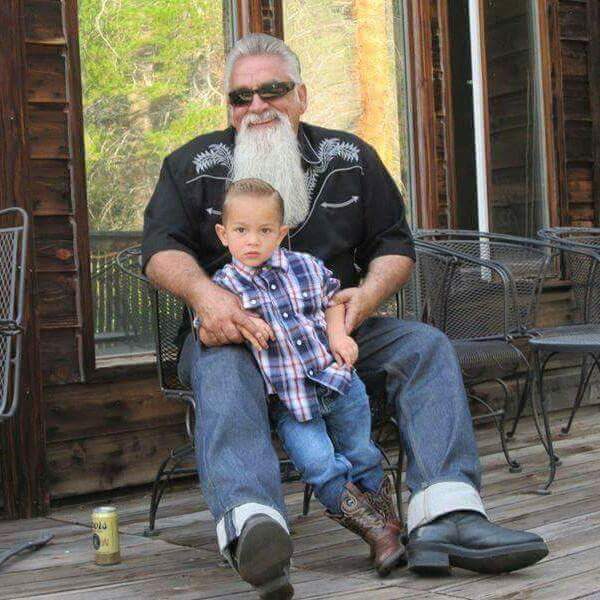 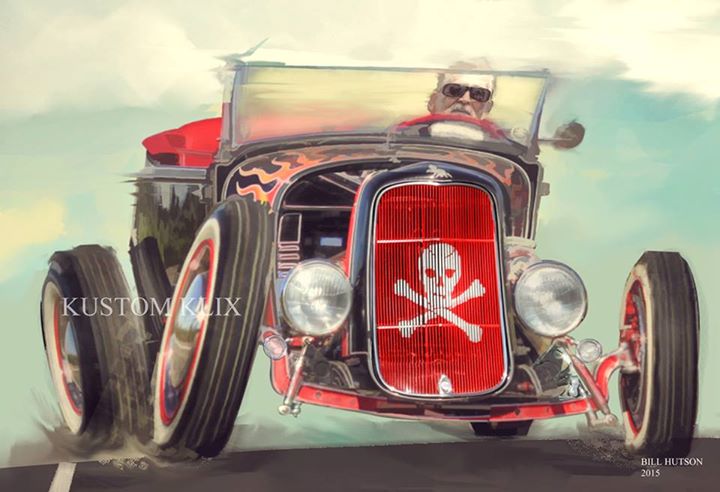 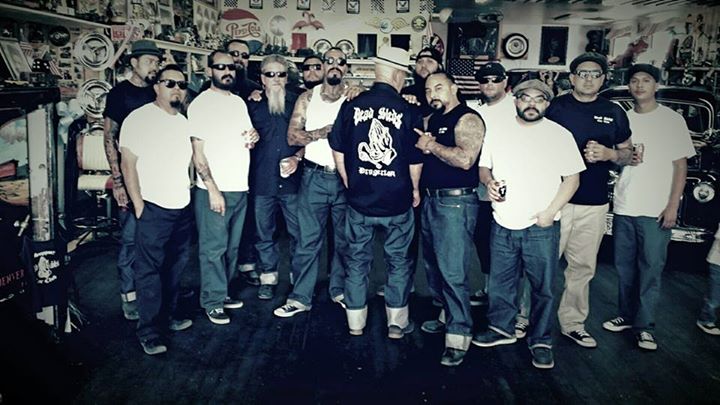 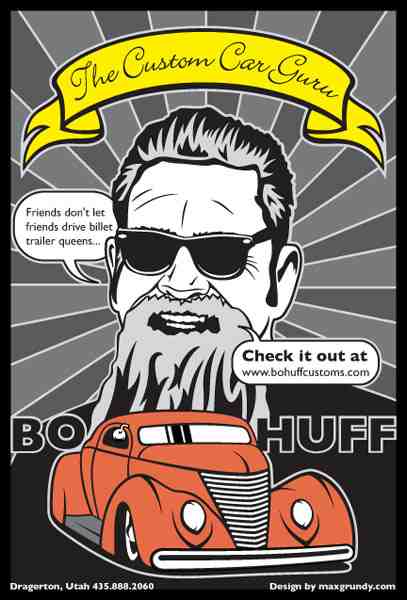 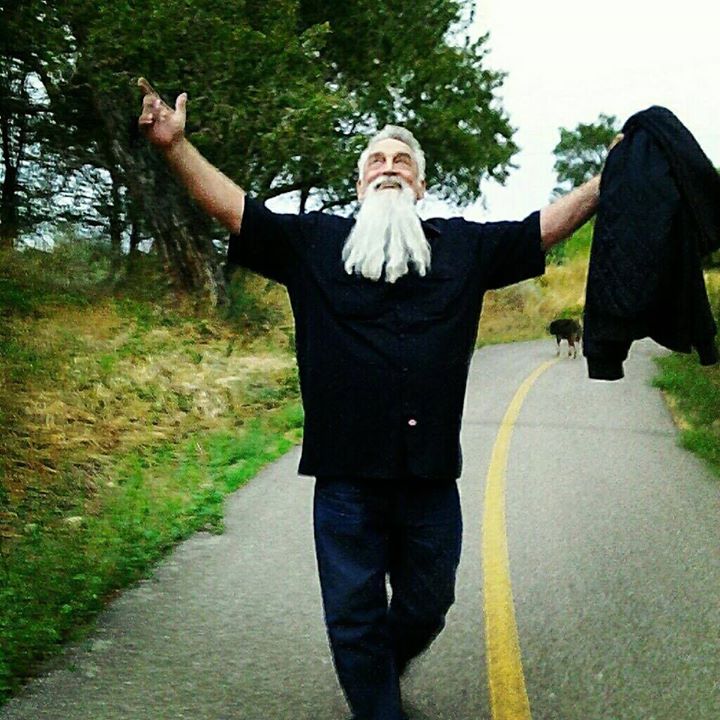 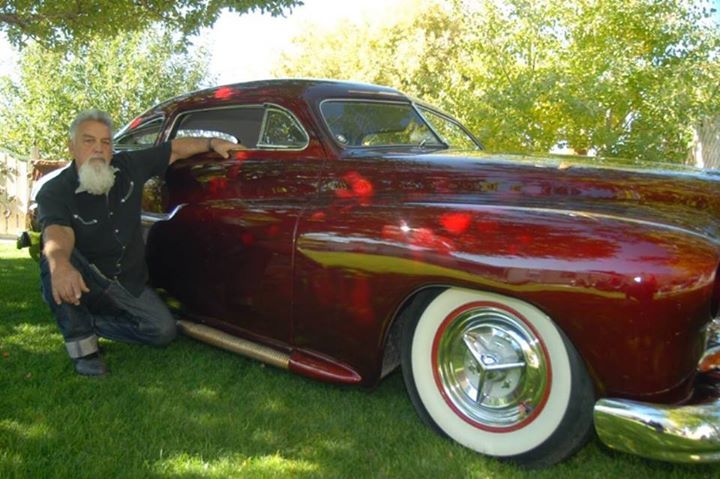 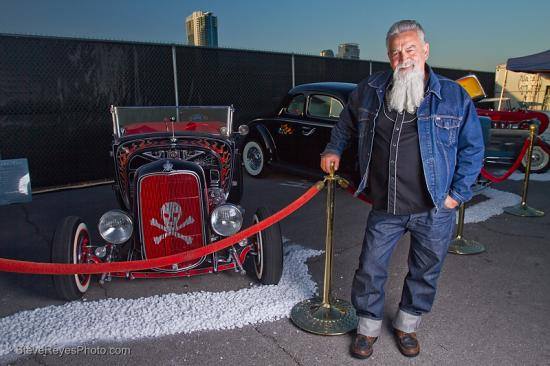 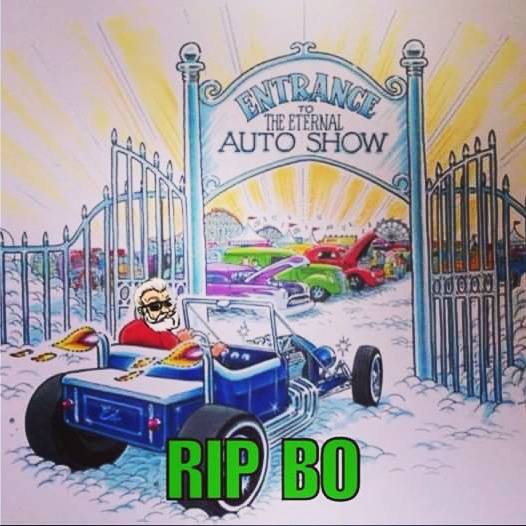 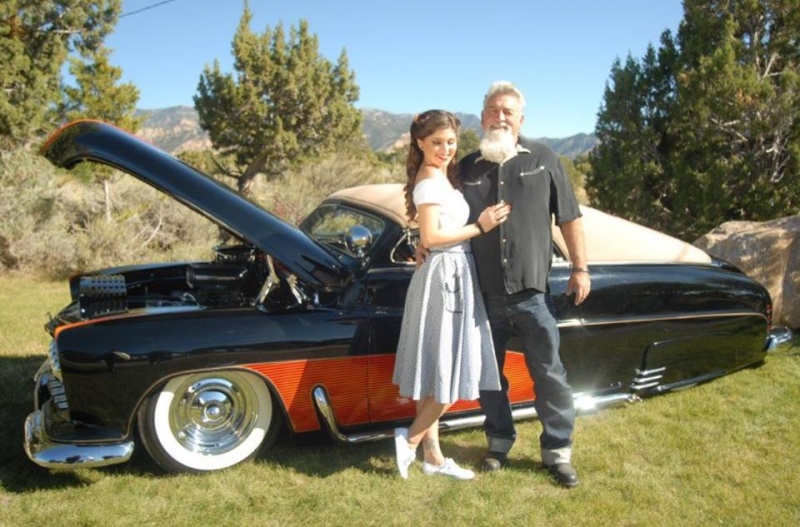 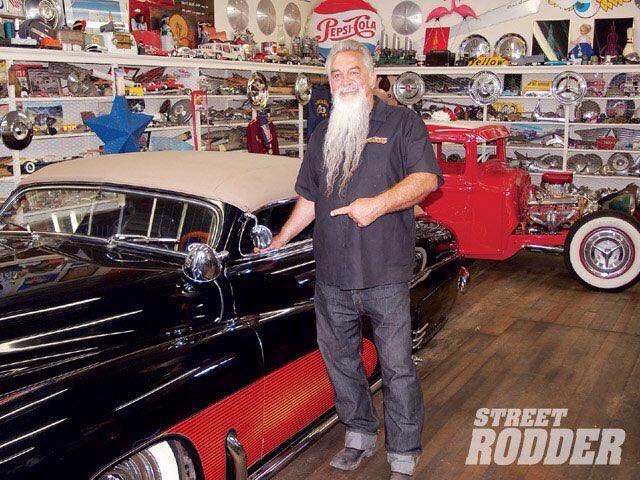 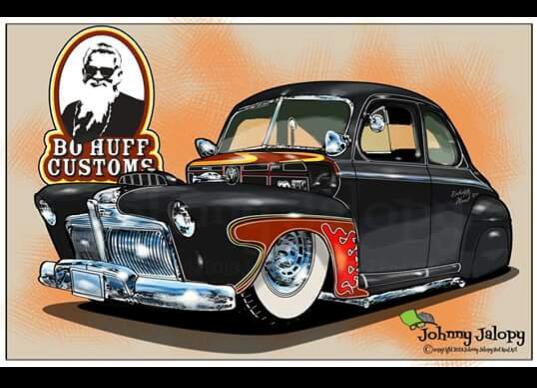 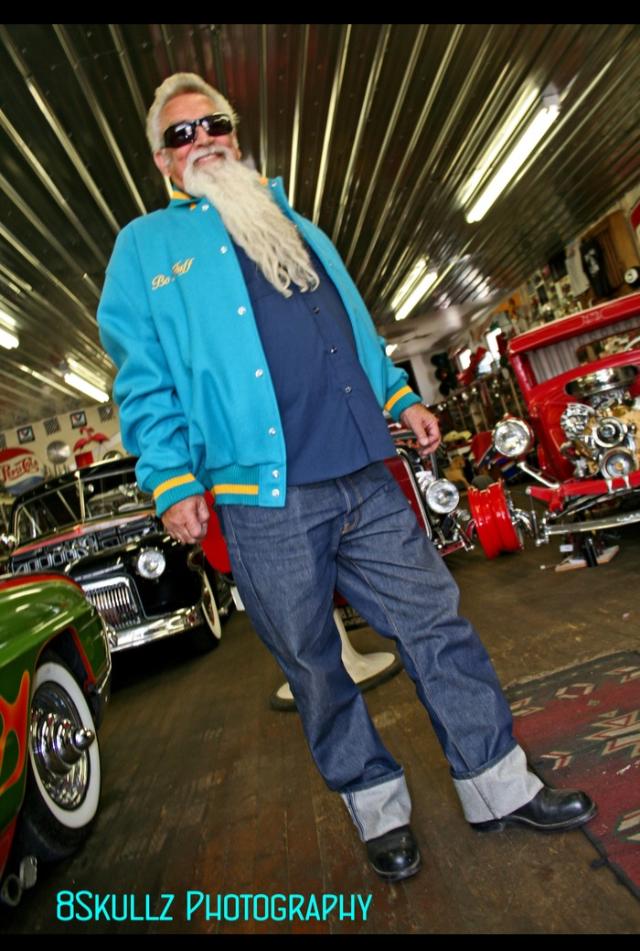 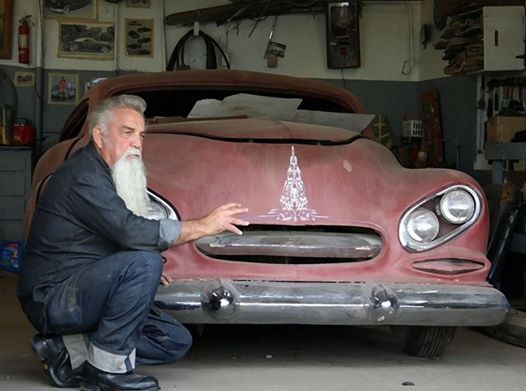