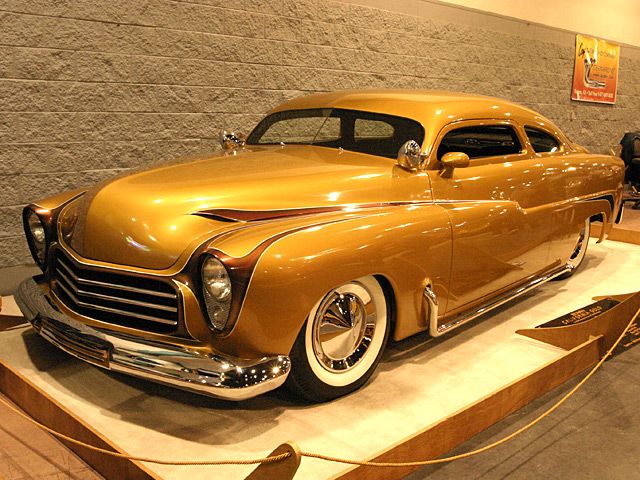 1951 Mercury restyled by Winfield's Custom Shop for Bill Wolfe of Turlock, California. Bill started to modify the Mercury in high school attending the school during the day and working nights to pay for the work being done on his car. Every time he got some money he made the 13-mile trip to Winfield's shop in Modesto for improvements. Doing a little at the time it took Gene 2 years to complete the car. The front fenders were modified to accept a pair of frenched 1953 Buick headlights and a hand made tube grille was installed in the modified grille opening. The grille bars were made up from 16-gauge black sheet metal bent 180 degrees on a punch press. The bars were then filled in at the ends and cut for V shaping to match the V in the hood. A 1953 Studebaker front lower pan was used on top, and the stock Mercury upper grille panel was turned upside down at the bottom. The grille and headlight restyling was featured in a "how to" story in Car Speed and Style December 1959. Airscoops were cut in the shaved hood, and the hood corners were rounded. Custom side pipes were installed through the front fenders, the door handles were molded off, and 1955 Buick side trim was added. In the rear two 1954 Packard taillights went onto each of the fenders. The bumper bolts were removed from the front and rear bumpers by welding them in place and smoothing the surface for rechroming. The rear bumper was fit with a Kaiser license plate guard and rechromed.[2] The car was not chopped due to Bill not having enough money for such a time consuming modification.[3] 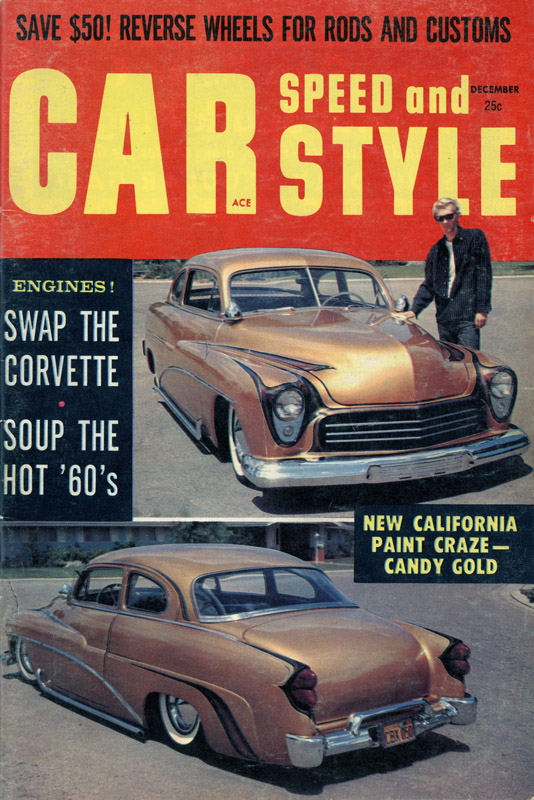 Once the bodywork was done Bill gave Gene permission to select a color for the car. Gene painted the car Candy gold. The color was achieved by first painting the car with a yellow ground coat covering the body completely. After that the car was sprayed with gold powder mixed in clear lacquer. The final color was a clear lacquer with gold toner. The more coats, the darker the final color comes out when you use clear lacquer, so Winfield gave the Merc 8 coats of clear lacquer. This version of Bill's Merc was shown in the Semi Custom Sedan class at the 9th annual National Roadster Show held in February 1958.[4] After showing the car in a solid color for about a year, Gene later upgraded the look on the car by adding scallops on the car.[3] The scallop job on the car was done in black and gold blended in the center with just a touch of burgundy for color.[2]


The interior was upholstered in black and gold pleated leatherette. The rugs were black. After the car was featured in Car Speed and Style December 1959, the dummy lake pipes given the black pleated leatherette treament.[3] The seats in the car were taken from a 1957 Ford. The Mercury was lowered by reversing the front suspension and reworking the control arms.[2]


The last Gene heard, the car ended up in a wrecking yard. In order to bring his old car back Bill Wolfe had Gene build him a chopped recreation of the car. The recreation was built using one of Gene's fiberglass bodies. The recreation was shown at the Grand National Roadster Show in 2006.[3] 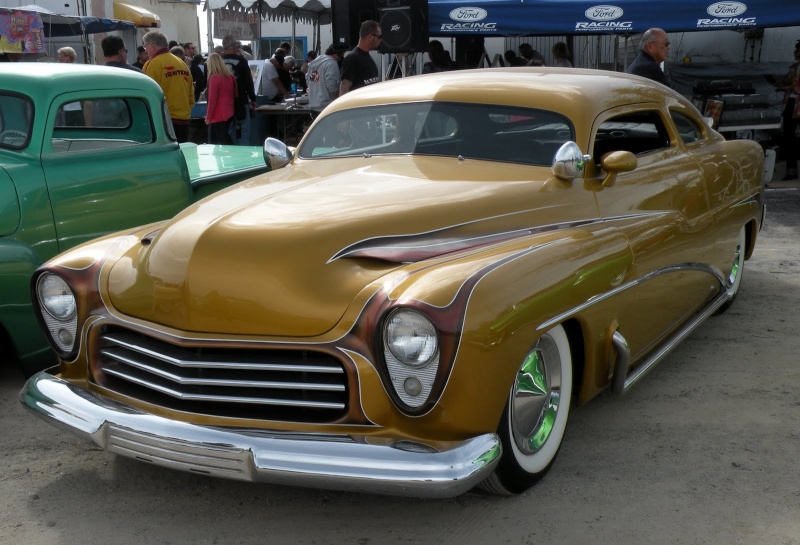 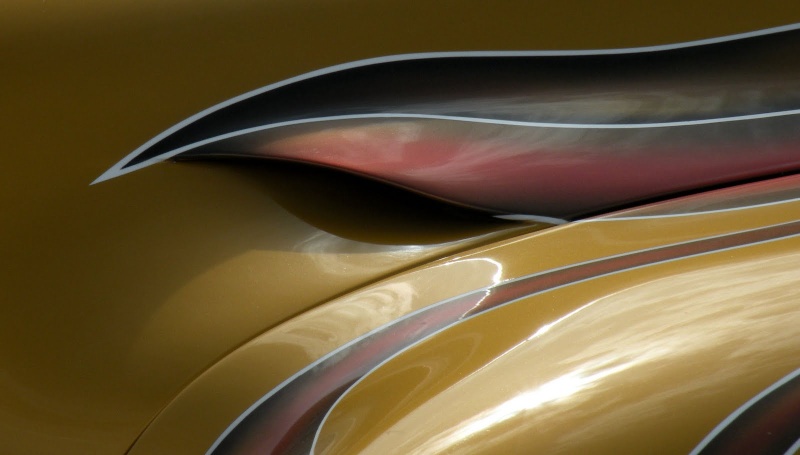 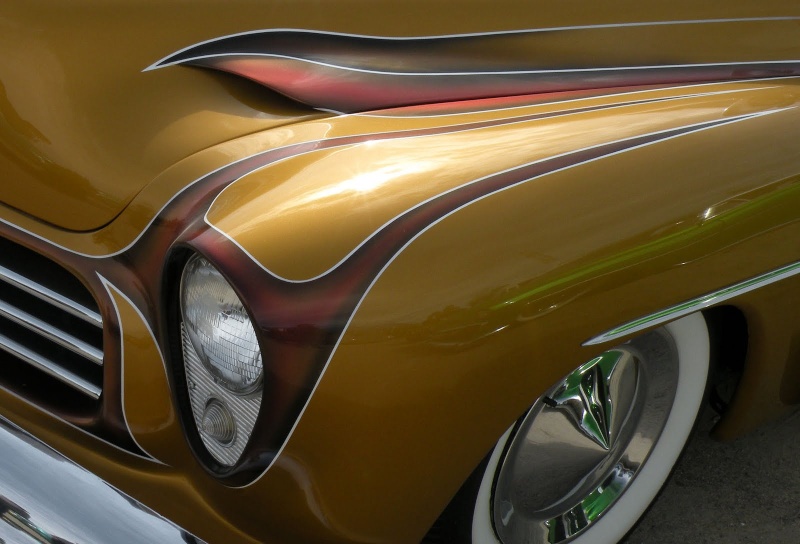 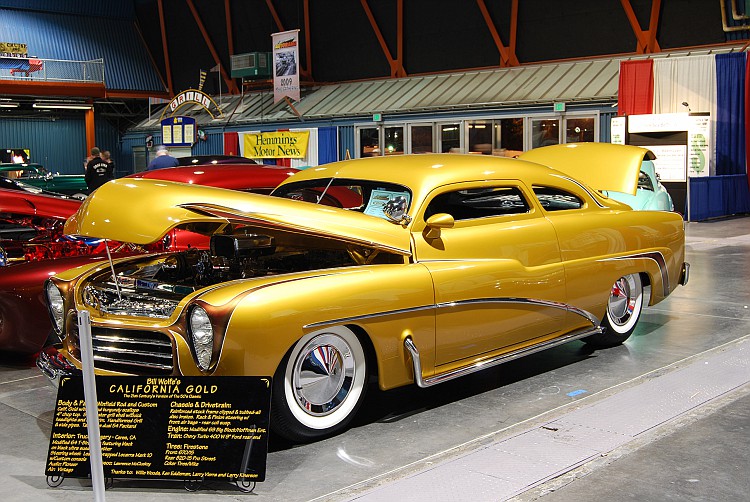 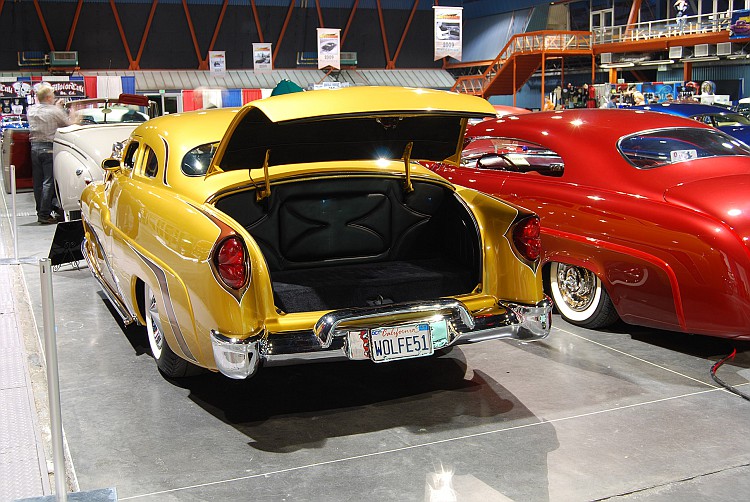 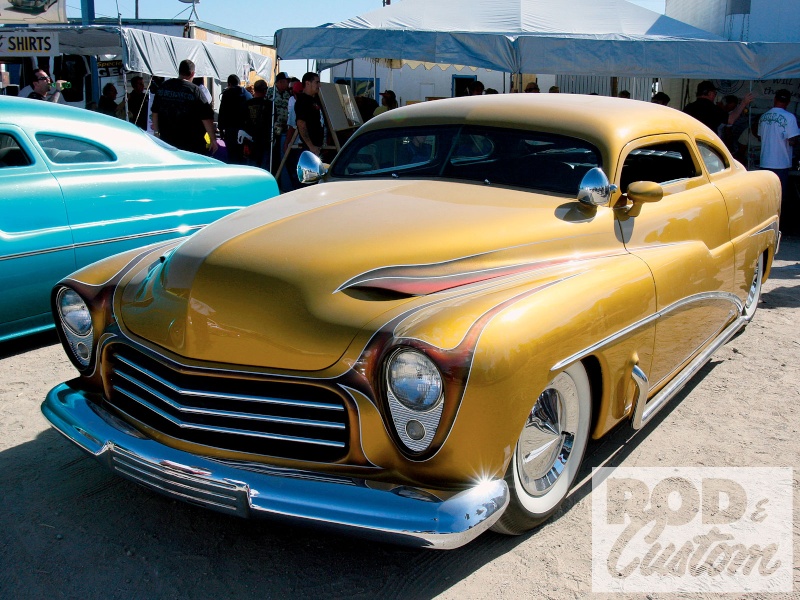