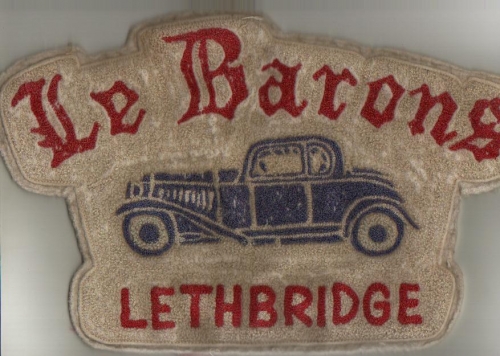 In about 1960 a small group of people would go down to Medicine Hat Alberta to watch drag races put on by a local car club. On their way back to Lethbridge they decided to form their own car club. Lyn Barnaby distributed a letter to many people who might be interested in such a club. Once people responded to the letter, Lyn scheduled a meeting.

The first Le Barons car club meeting was held in Lyn Barnaby’s garage in spring of 1961. There were about 23 people at that first meeting. Lyn Barnaby was elected President and Ross Hannan was elected Secretary Treasure.

The first order of business was to find a place to host the meetings. According to Lyn; the meetings took place for approximately 1 year in a garage that was located on 10th St. south. The group had monthly meetings discussing various projects they were all working on, played cards and just hung out.

According to Bill Forward and Ross Hannan, the founding members could also be seen cruising the streets of Lethbridge and hanging out with there cars on Mayor Magrath Drive almost every night in the now Legion parking lot.

It is unclear as to exact date the car club created its current name, however it’s known why they chose the name. Glen Richardson had the most beautiful 1928 Model A Roadster Pick-up that you have ever seen at the time that he affectionately called; "The Le Baron", with his permission for use, the "Le Barons Car Club" was official.

After the first year; the monthly car meetings moved to the Civic Center, continued there for the next 4 years.

The car club organized drag races at the abandoned WWII Pierce Air Strip near Fort Macleod in 1962 and 1963. According to Lyn; he made arrangements with the farmer who owned the land and the old air strip for its use. The car club hosted drag races there on Sundays. Word got around about the races and people would come out and watch as well as participate.

This went on for about 2 years (1962-1963) until they were pressured into getting insurance for the cars were becoming very quick and it was becoming too dangerous to continue. It was decided to cease the drag races.

In the fall of 1964, the Le Barons club sponsored a drag race at the Claresholm air strip. It was a success and a car club from Great Falls came up and participated in the drag races. They brought up one of the first Dragsters seen in the Lethbridge area. It was a thrill for anyone that came or participated.

Our 2nd Car Show was in the spring of 1965 and was located in the Northside Pavilion (the current Exhibition grounds) in Lethbridge. We not only had the car show, but hosted one final very successful drag race that fall.

The car shows and fun continued annually for the club in the early years. They managed to make good profit in those days which allowed them to host large get-togethers and parties for the members and spouses. They had dinners and dances with local bands all paid for by car club profits from annual car shows.

During the early 70’s Rod Runs were becoming popular with one of the first in Western Canada held at Banff. Of which Denny Morgan and a few others attended. After the success of Banff, Rod Runs started to appear yearly in Lethbridge and throughout Western Canada

From 1972 to approx. 1991 Denny Morgan was instrumental in organizing the yearly Rod Runs for the club (at that time named the Lethbridge Street Rod Association). The first run was held at the police shooting range in the river bottom with registration first at the Japanese Gardens. They were usually always held on the August long weekend. That first year saw 15 – 18 cars. A longest distance went to someone from Ontario says Denny Morgan. A few years later a couple drove a t-bucket from West Virginia.

The 2nd year saw 25 cars. The 3rd year they switched venues and held their Rod Run at 702 wing at the Lethbridge Airport. That year they had 35 – 40 cars. The club wanted the Rod Runs to consist primarily of cars from 1959 and older of which eventually the club standard became pre 1949. They generally gave out 3 awards: driver’s choice, longest distance & hard luck. For a few years they tried Ladies and kid’s choice as well.

Denny Morgan, Ross Hannan & Bill Forward (our main sources of info.) all recall having a great time with their families with sack races, egg drop contests etc. to entertain & enjoy the weekend events. It was always followed by a BBQ meal & dancing with local bands playing.

It was in the mid ‘80’s the Lebarons name returned to the club.

Because of the changing times and greater interest in later cars, the Lebaron’s Club (in the mid 90’s) made the change to be an open car club with no year restrictions.

From the early 90’s to present the car club continued to grow & has monthly meetings & elected executives. We are currently 30 members strong.

2001 we celebrated our 40th with a big event that many can still remember as a great time. The 45th was also celebrated with a smaller event.

We are very proud to host in 2011 our 50th anniversary as a car club. Just as years past we will be hosting a Show & Shine as well as a dinner & dance and much more.