From Jesse James and Butch Cassidy to Scarface and Tony Soprano, outlaws have always held a singularly ambiguous place in America’s popular imagination: we fear and loathe the gangster’s appetite for violence; we envy and covet his radical freedom. In early 1965, LIFE photographer Bill Ray and writer Joe Bride spent several weeks with a gang that, to this day, serves as a living, brawling embodiment of our schizoid relationship with the rebel: Hells Angels.

Here, along with a gallery of remarkable photographs that were shot for LIFE but never ran in the magazine, Ray and Bride recall their days and nights spent with Buzzard, Hambone, Big D and other Angels (as well as their equally tough “old ladies”) at a time when the roar of Harleys and the sight of long-haired bikers was still new and — for the average, law-abiding citizen — utterly unfathomable. The day-to-day existence of these leather-clad hellions, after all, was as foreign to most of LIFE magazine’s millions of readers as the lives of, say, Borneo’s headhunters, or nomads of the Gobi Desert.

“This was a new breed of rebel,” Ray told LIFE.com, recalling his time with the Angels. “They didn’t have jobs. They absolutely despised everything that most Americans value and strive for — stability, security. They rode their bikes, hung out in bars for days at a time, fought with anyone who messed with them. They were self-contained, with their own set of rules, their own code of behavior. It was extraordinary to be around.” 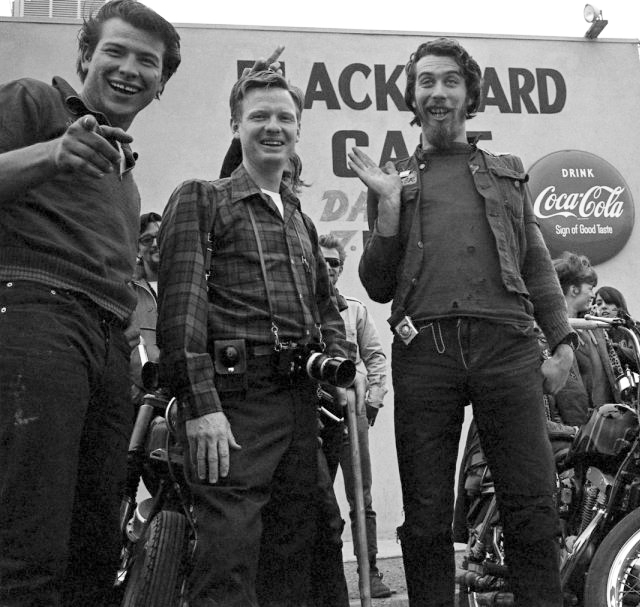 Ray spent some of the time with the Angels on a ride from San Bernardino (about 40 miles east of Los Angeles) to Bakersfield, Calif., for a major motorcycle rally. The Berdoo-Bakersfield run is a trip of only about 130 miles — but in 1965, it would offer enough moments (both placid and violent) for Ray to paint a rare, revelatory portrait of the world’s most legendary motorcycle club in its early days. The way in which the story came about, meanwhile, was as dramatic and unexpected as Bill Ray’s pictures.

“I’d done a story on Big Daddy Roth,” writer Joe Bride recalled, “a genuine L.A. phenomenon and legend in the Southern California car culture. He had a lucrative business designing hot rod-themed decals and cartoon figures. While I was wrapping up the story with Big Daddy, the Angels were in the news. They were accused of terrorizing a small central California town and being major growers and distributors of pot. Big Daddy said he knew a lot of Angels, did business with them and that they were more lost nomads than real criminals. After meeting them, by the way, my take on them was a little bit closer to the prevailing opinion than to Big Daddy’s. . . .”

“I told Big Daddy Roth I’d like to meet the Angels, talk to them about doing a story,” Bride said. “It would be a chance for them to get some recognition, and explain why they did what they did. Not long after the story on Big Daddy ran, in late 1964, Roth called and said, ‘They’ll meet you — with conditions.'” Bride met two Angels at Big Daddy’s store. They blindfolded him, put him in a car and drove into the mountains. At a bar “with what looked like 100 bikes parked outside,” no longer blindfolded, Bride met a stocky, long-haired Angel who asked if he shot pool. They played some nine-ball, and Bride beat the guy two out of three games. Bride then negotiated, there in the bar, a relationship where the Hells Angels agreed to allow him and Bill Ray to shadow them. Bride sat back, had a few beers, and then they drove him back to L.A. Not long after that, Ray and Bride began reporting the story.

Ray and Bride spent more than a month with the Angels in the spring of ’65, “mostly on weekends,” Ray remembers, “but the Bakersfield run was around the clock, three days and nights. In Bakersfield, I slept on the floor of the Blackboard Cafe — the bar that the Angels basically lived in while they were there.”

Bill Ray with Hells Angels, 1965“I got along with the Angels,” Ray says today. “I got to like some of them very much, and I think they liked me. I accepted them as they were, and they accepted me. You know, by their standards, I looked pretty funny. Just look at that picture of me (left). That’s some kind of a plaid shirt I’ve got on,” he says, incredulity mixing with amusement, “but that was the best I could do to try to fit in!”

“One thing about the Angels that I found especially fascinating,” Ray says, “and something I’d never given much thought to before I started photographing them, was the role that the women played in the club. The girls weren’t there in chains, or against their will. They had to want that life if they were going to be accepted by the Angels. These guys were kings of the road. I don’t think they ever felt they had to look around for girls. Girls came, and they had their pick. Then they’d tell them where to sit and what to do.”

One of Ray’s photos, in particular — slide 14, featuring a group of women (including one with what appears to be a bandaged, broken nose) hanging out in a bar while the bikers gather in a separate room — is especially illuminating. “The men were having a business meeting,” Bill Ray recalls, “and the women were definitely not invited there. When those guys were busy, the women just sat and waited. They’d smoke, drink beer, gossip, but they were pretty much just on ice until the meeting broke up. I remember, too, that many of them were surprisingly young: teenagers, or in their early twenties. They didn’t look young, though. Riding around on the back of a Harley at a hundred miles an hour in all sorts of weather will age you, I guess.”

Nowadays, when a hugely popular TV show like Sons of Anarchy brings the violence and twisted moral code of the outlaw-biker aesthetic into living rooms every week, it’s easy to forget how thoroughly (and willfully) the Angels shocked and frightened “polite” society five decades ago.

“Some of them are pure animals,” Birney Jarvis, a one-time Hells Angel who later became a newspaper police reporter, once said. “They’d be animals in any society. These guys . . . should have been born a hundred years ago, then they would have been gunfighters.”

One of the images in this gallery — slide 8, featuring two Angels locked in what appears a passionate kiss — is a graphic, surprising example of something that Bill Ray says struck him forcefully at the time: namely, the Angels’ apparent need to shock people. “That’s outside the Blackboard Cafe,” Ray remembers. “That’s the sort of thing they would do all the time, just to freak people out. As if to say, What’re you looking at? You got a problem with this?“

“It was exhilarating being around them, no question about it,” Ray says. “You just never knew what they were going to do. You’re always kind of on edge, because — think about it — these people have a lot of time to waste. They don’t punch a clock, so they fill the time drinking beer, smoking pot, screwing around. There was always a sense that anything could happen at any minute. Things could go from lighthearted to tense to really scary pretty goddamn quick.”

Why wasn’t the Angels story published in LIFE, after Ray and Bride spent so much time not merely reporting the story, but putting themselves at serious risk inside this notoriously insular, die-hard gang? According to Bride, “George Hunt [LIFE's managing editor] said he didn’t want to run a piece on ‘those smelly bastards.'” Bill Ray, meanwhile, recalls that “a lot of stories were killed back then because of one remark by an editor who didn’t like the idea. George said we weren’t going to run it, and that was that. I wasn’t in the meeting,” he adds with a laugh. “Editors went to great lengths to keep photographers out of discussions like that. They knew the argument would never end.”

Ray vividly remembers the moment he truly felt accepted, or as accepted as he was ever going to be, by the Angels. In a confrontation reminiscent of a famous scene in Hunter S. Thompson’s classic 1966 book, Hell’s Angels, when Thompson was almost stomped to death by bikers, Ray says that “he got in a bit of trouble one day, in a bar. Some bikers — guys who weren’t Angels — saw me taking pictures. They didn’t like it, but they didn’t realize that I was a sort of mascot of the real tough guys. I’d been shooting the Angels for maybe a week at this point. I was about to be attacked by one of these guys when a Hells Angel standing next to me made it clear that if a hair on my head was touched, the other guy was a dead man. From that point on, I felt . . . well, not safe, because I never felt safe with those guys, but as if I’d passed a test, somehow.”

Ray stresses that while the Angels he spent time with smoked pot, and he once saw them “beat the holy hell” out of some other bikers behind a bar, he “never saw these guys involved in anything deeply illegal. Then again, they always had plenty of money for gas and beer. They lived on their bikes — that is, when they weren’t hanging out in bars. Their money had to come from somewhere, but none of them ever worked.”

(Today the FBI contends that the Angels and other gangs — specifically, the Pagans, Outlaws MC and Bandidos — are deeply involved in extortion, drug dealing, trafficking stolen goods and other criminal activities.)

“There’s a romance to the idea of the biker on the open road,” Ray says. “It’s similar to the romance that people attach to cowboys and the West — which, of course, is totally out of proportion to the reality of riding fences and punching cows. But there’s something impressive about these Harley-Davidsons and bikers heading down the highway. You see the myth played out in movies, like Easy Rider, which came out a few years after I photographed the Angels. You know, the trail never ends for the cowboy, and the open road never ends for the Angels. They just ride. Where they’re going hardly matters. It’s not an easy life, but it’s what they choose. It’s theirs. And everyone else can get out of the way or go to hell.” 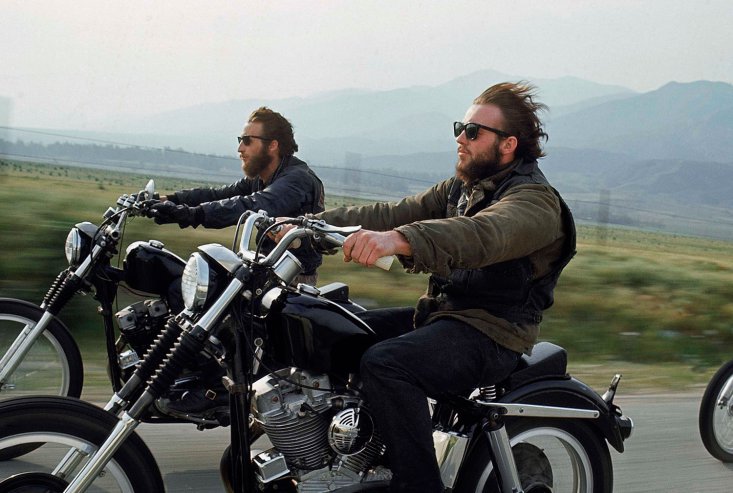 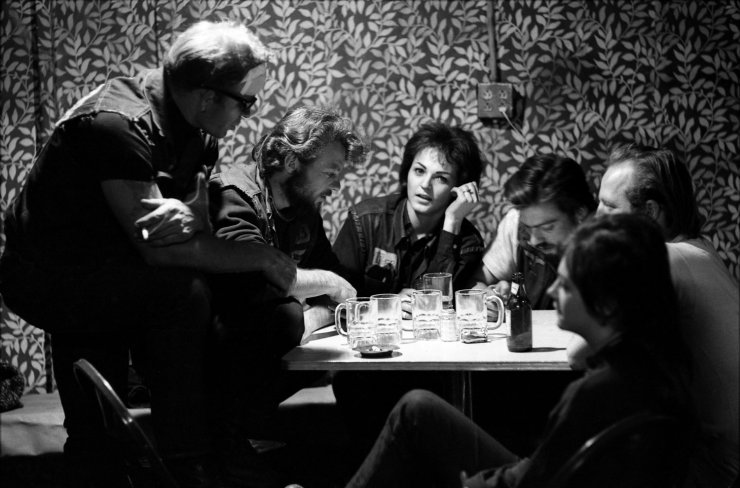 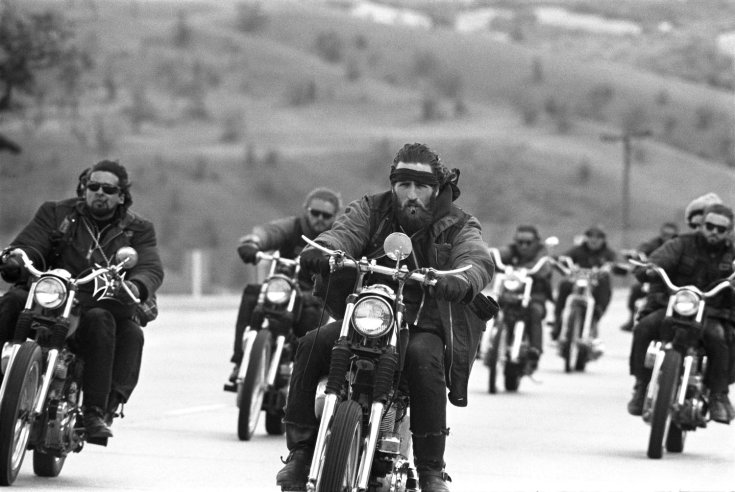 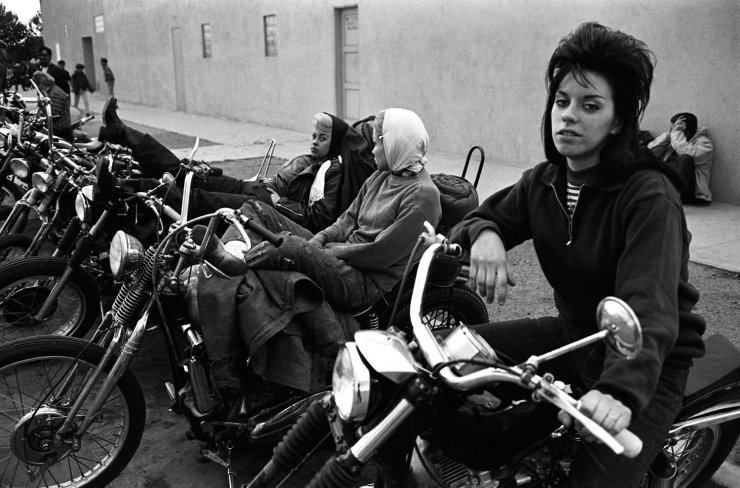 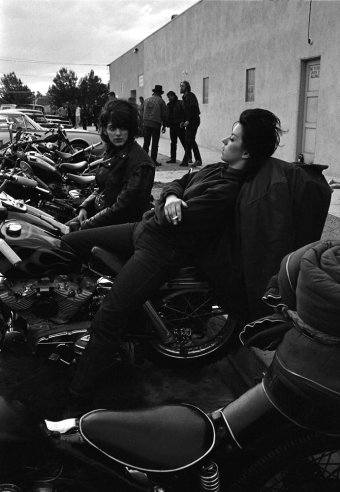 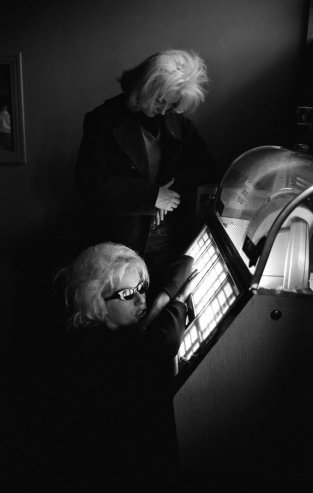 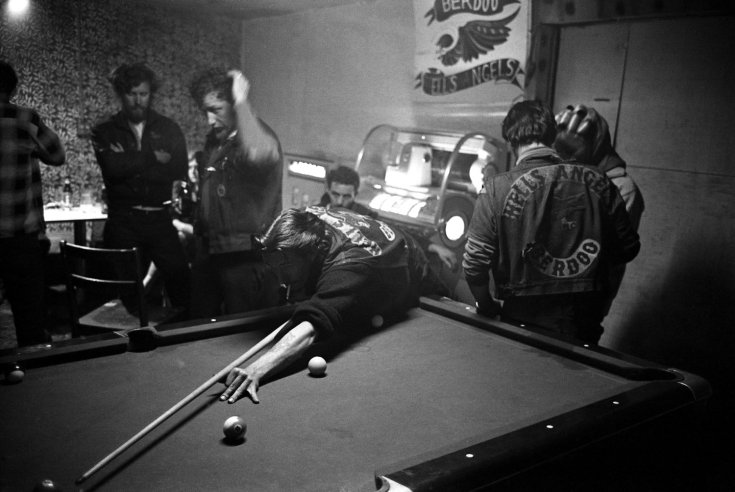 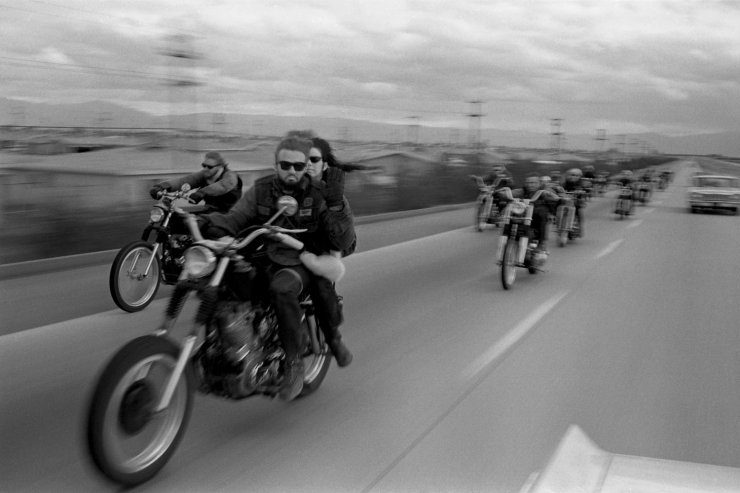 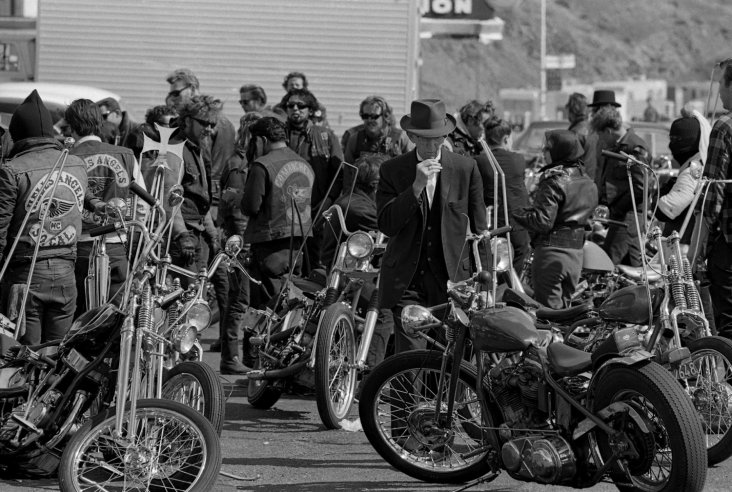 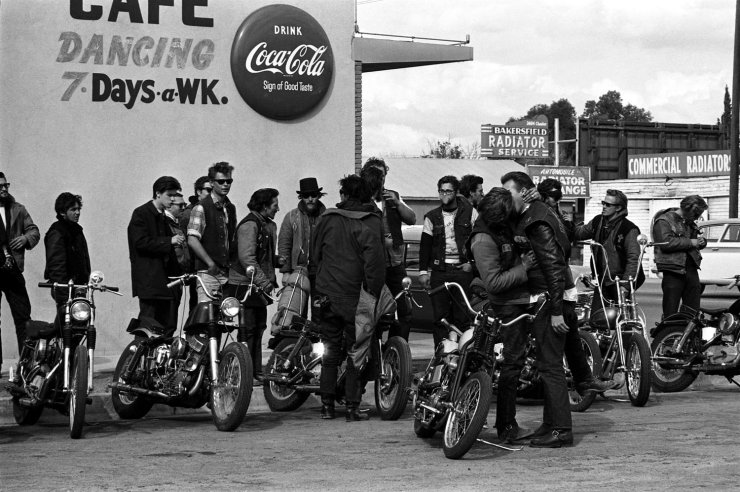 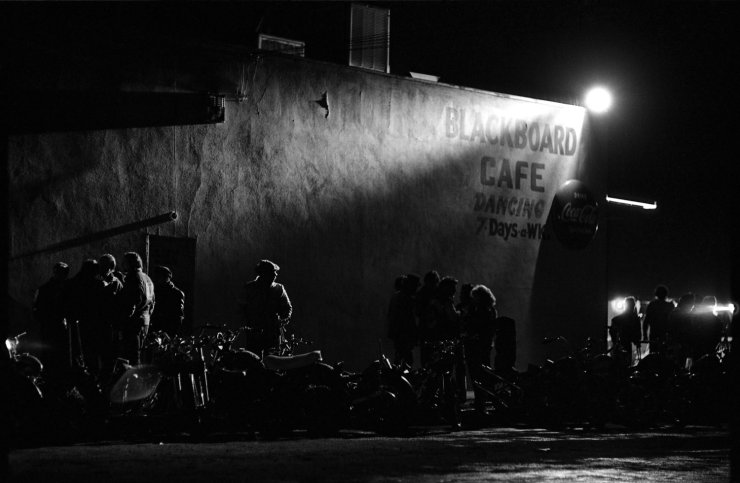 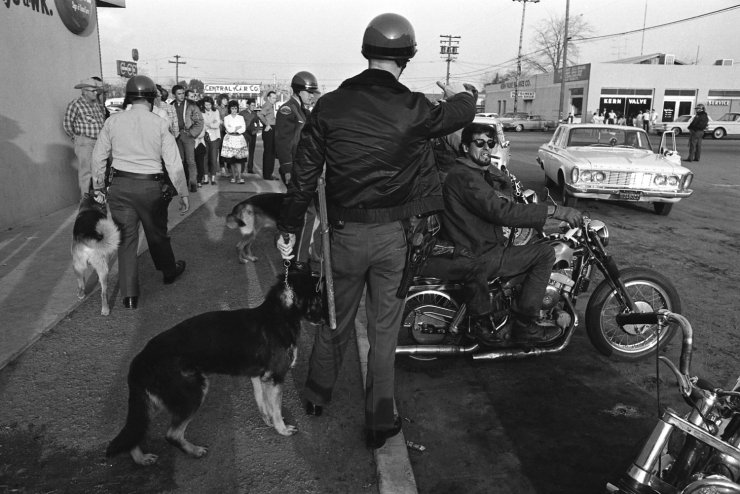 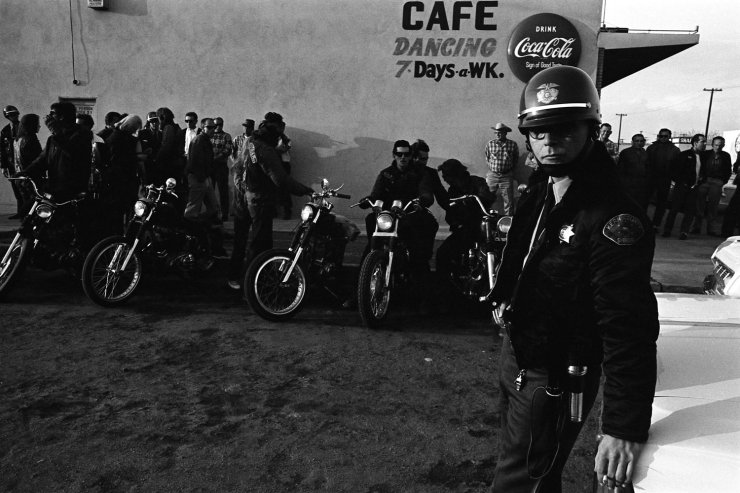 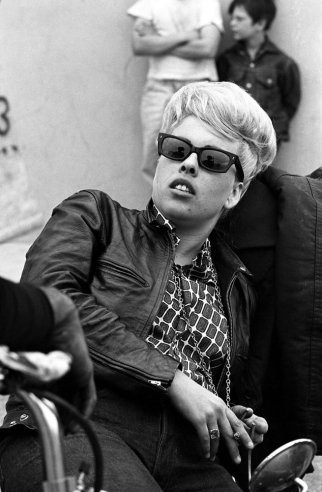 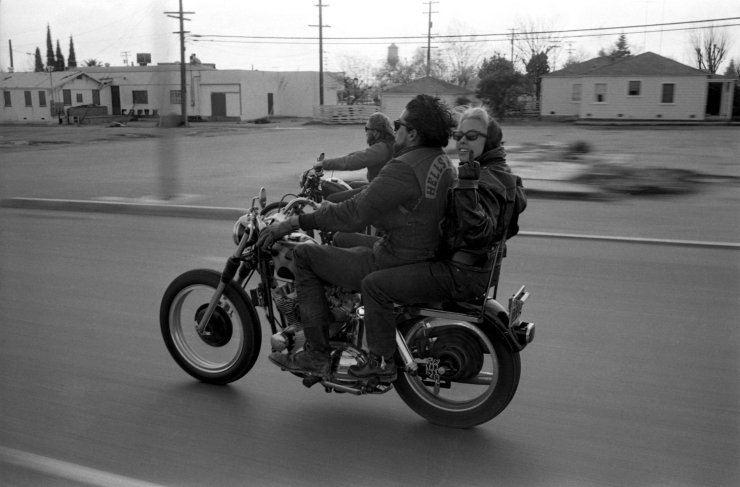 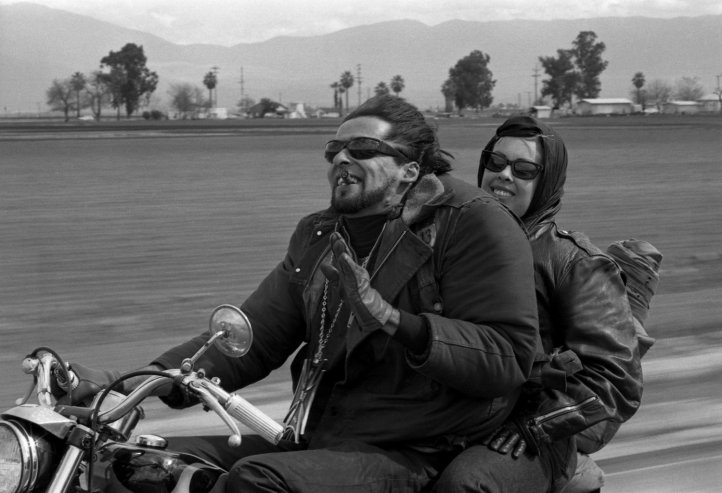 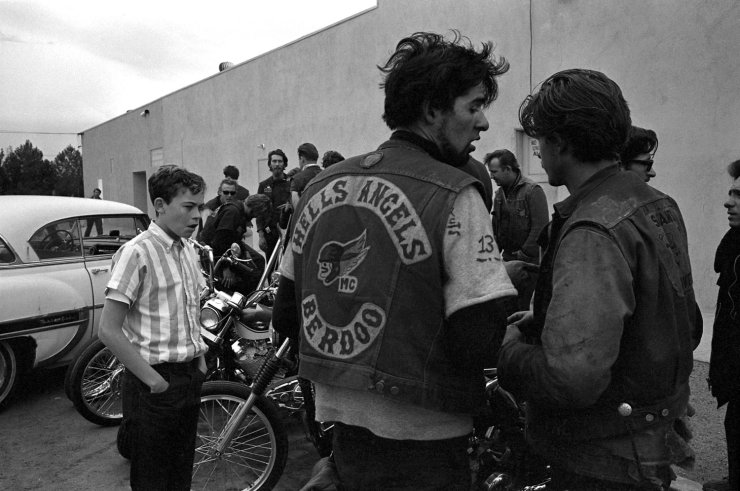 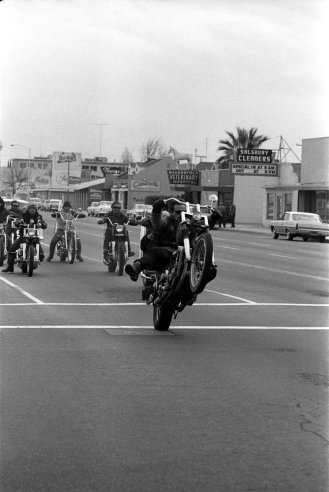