In 1965, William "Wild Bill" Gelbke built his own bike called "Roadog". The ginormous bike was 17-feet long and weighed 3,280 pounds! Four hydrolic rams were needed to park the bike. Wild Bill then toured the country, riding over 20,000 miles and reaching speeds of 90+ mph!

Man Becomes Myth
William "Wild Bill" Gelbke has become something of a legend. People who knew him still pass on tales of their encounters with him. His mother tells stories of his childhood exploits and his attempt to outfit a baby carriage with a washing machine motor. 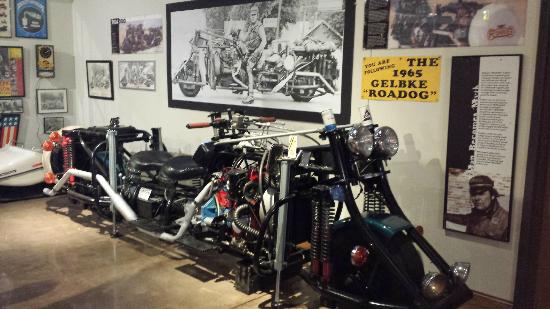 Gelbke was an electrical and mechanical engineer, working for McDonnell Douglas and Hughes Aircraft. But "Wild Bill" longed for excitement so he opened a bike shop and began building and designing motorcycles. Roadog was one of his "biggest" endeavors and Gelbke logged 20,000 miles on the bike in its first year. 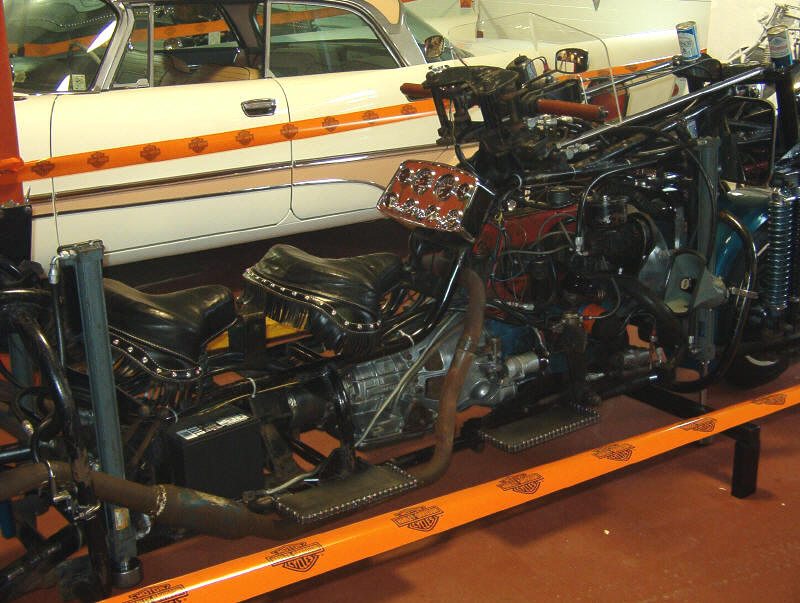 Gelbke’s ambition and outgoing personality made him known as a free spirit. Stories persist that he would jump on Roadog and drive to Texas or Okalahoma for a good steak dinner or beer.

Although Gelbke died young, one thing is certain: Roadog is a permanent reminder of how big and one-of-a-kind "Wild Bill" Gelbke was. 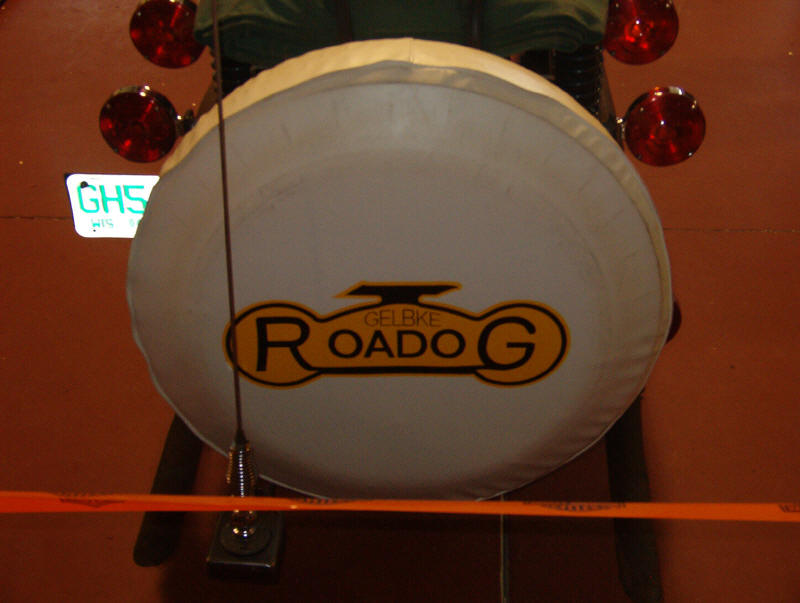 Roadog Is Born
"Wild Bill" Gelbke created Roadog without plans or blueprints, relying upon his imagination and expertise. He had the simple goal of creating the biggest motorcycle ever to ride the road, but his work was much more than that. 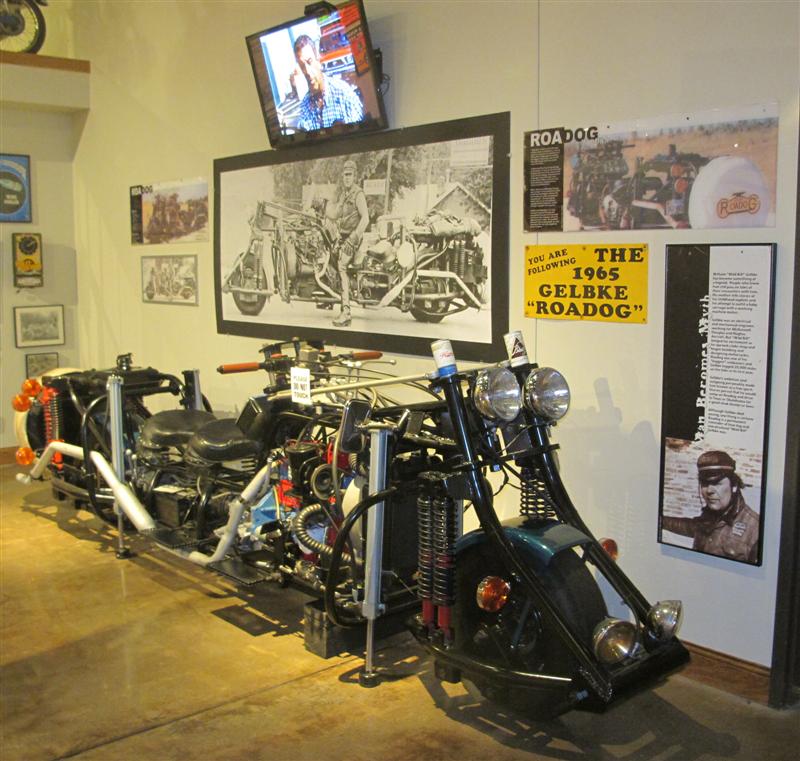 Gelbke built Roadog using existing technologies in ways no one else had. Roadog took form with a frame built from aircraft tubing. The powertrain and engine were the same used in the Chevy II Nova. The rear end of the bike was a modified one-ton Chevy truck differential. 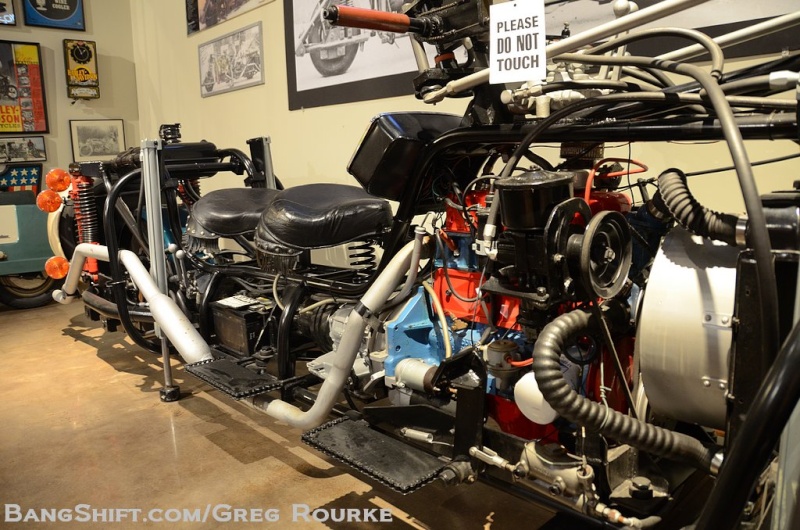 Other elements of Roadog’s design were unique to the motorcycle world. It had twin headlights and was the first motorcycle with an automatic transmission. The bike had disc brakes from a Corvette and was equipped with four hydraulic stands to keep it upright when parked. 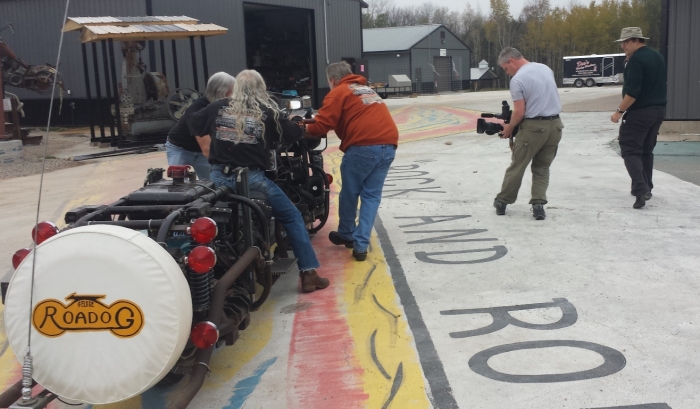 Gelbke used Roadog as his daily transport around Chicago and was proud to answer the inevitable questions from strangers when he appeared on his bike. He would be pleased to know that people are still amazed at the size and complexity of his creation.
_________________
We don't care the People Says , Rock 'n' roll is here to stay - Danny & the Juniors - 1958

The Roadog is the world's largest motorcycle. It is a hand-built, custom machine, and was built by one man, William "Wild Bill" Gelbke.

Born in Wisconsin, "Wild Bill" Gelbke graduated from college in Wisconsin as an electronic engineer and moved out to California for additional schooling at a Southern California University. After which, he worked as an aircraft engineer for McDonnell Douglas and Hughes Aircraft. It was during this time he decided to turn his talents towards motorcycles. In the early 1960s he relocated from Los Angeles to Chicago, and opened up his own shop, the Gelbke Motorcycle Co.

He had a vision of what motorcycles of the future would become, and decided to make a prototype. This was the genesis of what he called "Roadog".

Unlike conventional motorcycles which had a tube steel construction, Wild Bill choose 4130 chrome-molybdenum tubing for the frame. Starting in 1962, he began to assemble this custom motorcycle. It was powered by a 152 cubic inch (2.4L) four-cylinder engine from a Chevy Nova II. It featured a two-speed Automatic PowerGlide transmission and included a reverse gear. The bike also had shaft drive.

When it was finished, the Roadog weighed a phenomenal 3,280 lbs. Due to its enormous weight, Gelbke couldn't use a conventional kickstand; instead, he installed four hydraulic rams, one at each corner, controlled by the rider.

Featuring a 126 inch wheelbase, and a length of over 17 feet, the massive bike had a turning radius of 110 feet.

With the intent of making it a cruising bike, Gelbke immediately took it on the road, covering over 20,000 miles the first year. The bike was seen in most of the Southern United States, making trips to Los Angeles, Texas, Louisiana, and New Jersey.
Roadog II

Roadog II was a complete rebuild of the original Roadog. The second motorcycle was completed in 1965, with some lessons learned from the original Roadog being employed. The front shocks were reduced from four to two springs. Also a crossbar was added to the hydraulic rams, making it easier to level the bike.

Because of the size and unusual drive characteristics of this bike, there were only a few people who were ever able to ride it. Buzz Walneck of Walneck's Cycle Trader, a publication famous for their variety of vintage and unusual motorcycles acquired the bike and rode it in 2005.
The Auto Four

The Auto Four was Bill's attempt at a production model. There were 7 or 8 built total.

Engine: Inline 4 cylinder, liquid cooled 1275 cc British Leland engine with lots of torque and horsepower. The bike is not fast off of the line but has a vibration free cruising speed of 90 mph. Shaft driven to BMW universal mounted to rear wheel hub.

Ride: Some had a similar suspension to the Roadog and some used Harley suspension both front and rear.

Seat and Saddlebags: Original Harley seat and specially made saddlebags

In 1978, William Gelbke was shot and killed by local police in a domestic dispute in which an armed Gelbke shot at police. The bikes disappeared, only remembered by occasional reprints of photographs and posters. Finally in the mid-1990s they resurfaced, and are owned by private collectors. The Roaddog once again has resurfaced in 2013. Steve "Doc" Hopkins has bought it and has placed it in his museum for the public to see at Doc's Harley-Davidson of Shawano County. Doc was also able to purchase one of the Auto Four and that is also in the museum for the public to see.