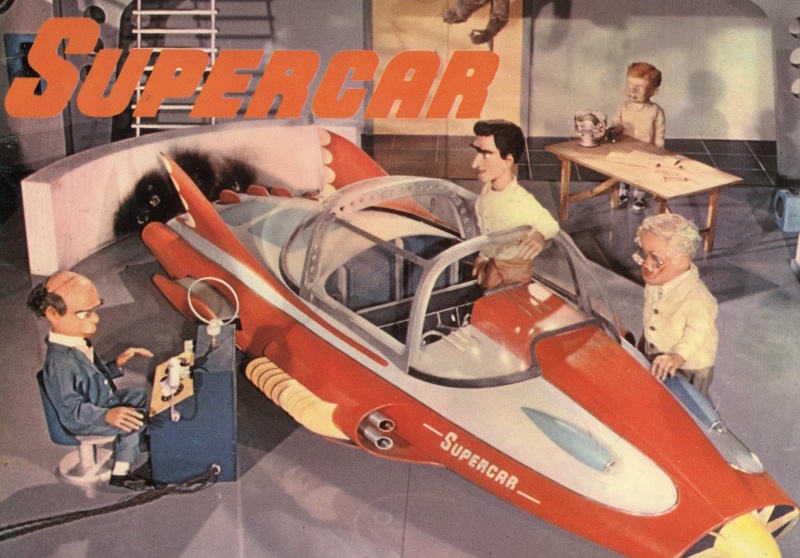 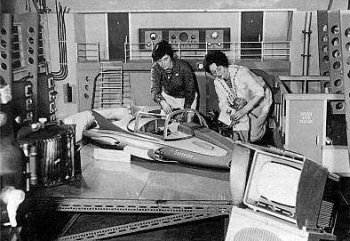 Supercar (39 episodes) ran from 1961 till 1962 and was Anderson's first major puppet masterpiece. It was the first to use Supermarionation and included many other trademarks that would go on to be Anderson series staples like "the launch sequence" in the credits which would be used all the way up until Space: 1999. Supercar follows the adventures of Mike Mercury and his friends and their Supercar which saves the world and lives on numerous occasions. The characters are all cliched types but like all Gerry Anderson series, it's the characters that allow you to fall in love with the show. Somehow even though the episodes are only 22 minutes long, Anderson and crew manage to form an emotional bond to such cardboard characters. Mike Mercury the hero is a test pilot for Supercar. Supercar is a experimental vehicle that was similtanously a car/boat/plane/ or rocket depending on its emergency. Professor Beaker and Professor Popkiss are the two scientists who invent this wonderful vehicle and ten year old Jimmy Gibson was a Supercar miracle rescue survivor and Mitch was his annoying pet monkey. The Villains were the fiendishly wonderful Masterspy (who looks like a Kingpin puppet) and his crony the slimy Peter Lorre homage Zarin. Between Masterspy,Zarin, world disasters, and Mitch's hijinks, Supercar and company had their hands full for 39 episodes. 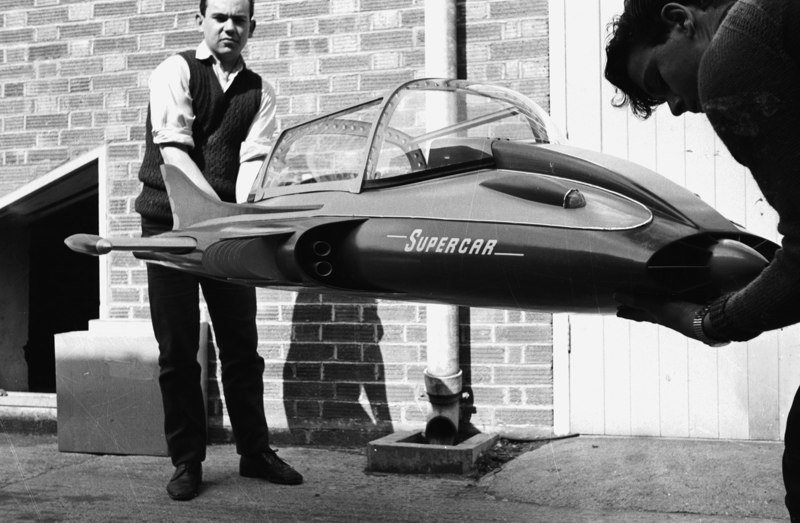 Supercar is early Anderson so it's full of firsts that are done better later but it's still thoroughly entrancing. One of the firsts is the stereotypical hero character, followed by the dodding professor types, and finally the comedy relief animal (thankfully the animal characters were dropped by Stingray). The slimy Peter Lorre villain stereotype Zarin is another that was redone for later series like Stingray. The episodes are always fast paced and fun as the locals change and perils are never repeated. One of the best and most shocking for its time episodes is "Sky's The Limit". In it Masterspy and some goons storm the Supercar base and have a shoot out with Mike Mercury and friends. For a kids show it's level of action and gun use seems something that what have been taboo then and now especially considering the Jimmy character was 10 years old and in the way of gunfire! 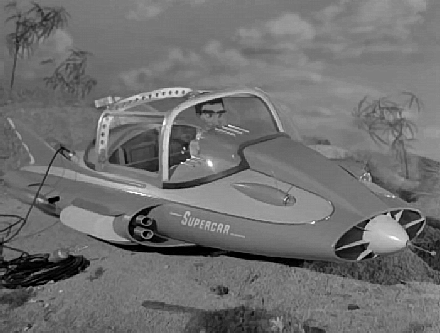 The Supercar is the shows star with its various functions. From one episode to the next it's going underwater, in the air, on land, and even in caverns. Supercar and its gadgets, cast of characters, and marvelous adventures were a hit and would be perfected in what is perhaps the best of Gerry Anderson's puppet series Fireball XL5.


The new series, Supercar (1960-1961), was created by Anderson and Reg Hill and marked several important advances for APF. Sylvia Anderson took on a larger role and became a partner in the company. The series was also the official debut of Supermarionation, the electronic system that made the marionettes more lifelike and convincing on screen. The system used the audio signal from the pre-recorded tapes of the actors' voices to trigger solenoids installed in the puppets' heads, enabling the puppets' lips to move in exact synchronization with the voices of the actors.
http://www.fanatique.net/Television/Gerry-Anderson/gerry-anderson.php 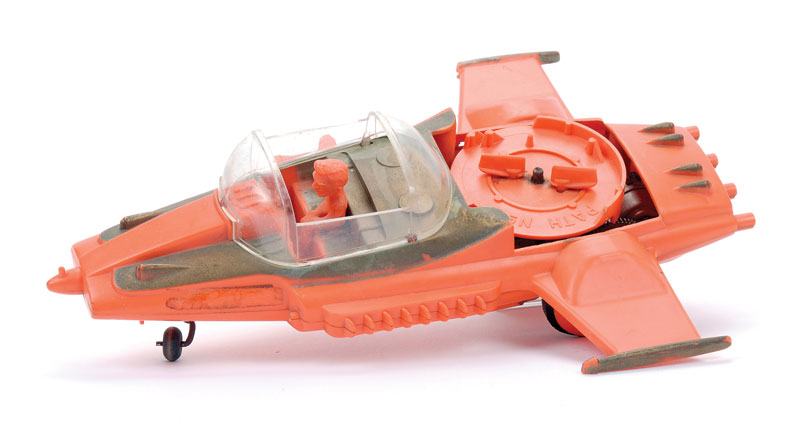 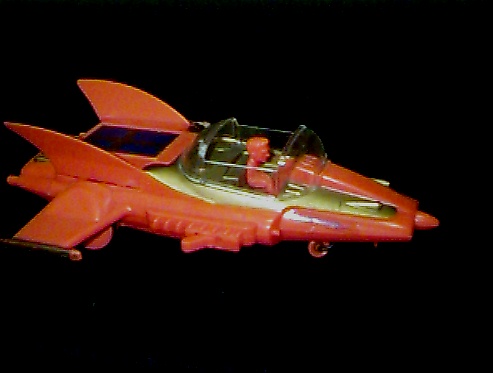 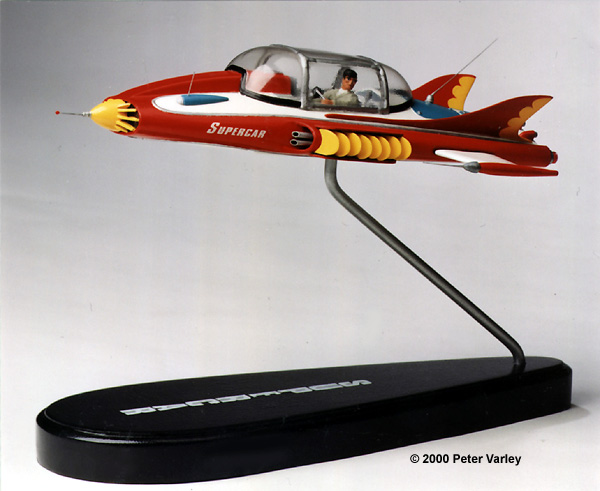 This Reshape resin and white metal kit required relatively little scratch-building. The most notable exception was the instrument panel and certain interior details, which were reproduced precisely thanks to computer-generated images available on the Supercar Home Page. As well, Mike Mercury is a heavily modified 1/32nd scale military figure. Positioning each of those fiddly side "gills" was the only real struggle with this kit. In a departure from my usual method, Supercar was hand-painted using Polly S water-based paints and finished in semi-gloss clearcoat, as the masking required for its complex paint scheme would have been a nightmare. Base is from an aircraft manufacturer's promotional model. 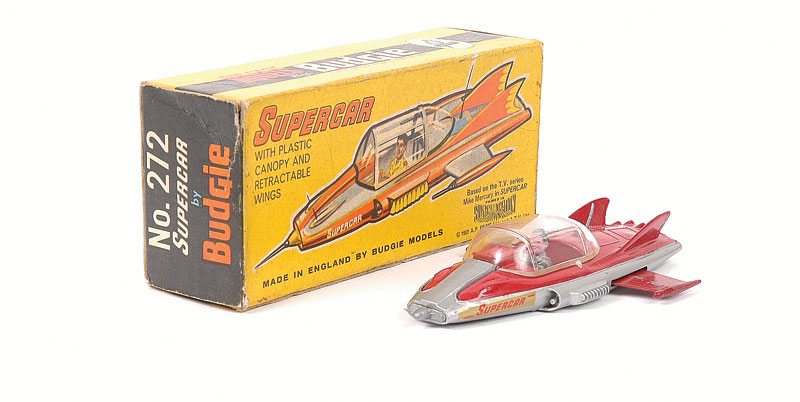 Budgie No. 272 Supercar is red and grey with a plastic clear cockpit. Also featured retractable wings, just like the car in the TV series. Mike Mercury can also be seen sitting behind the wheel, ready to blast off! 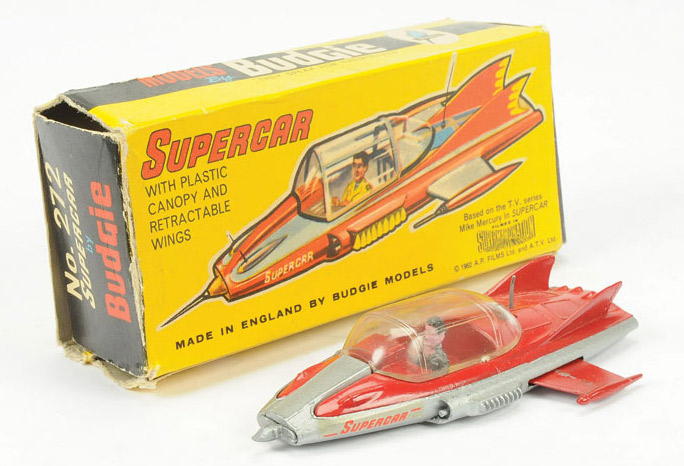 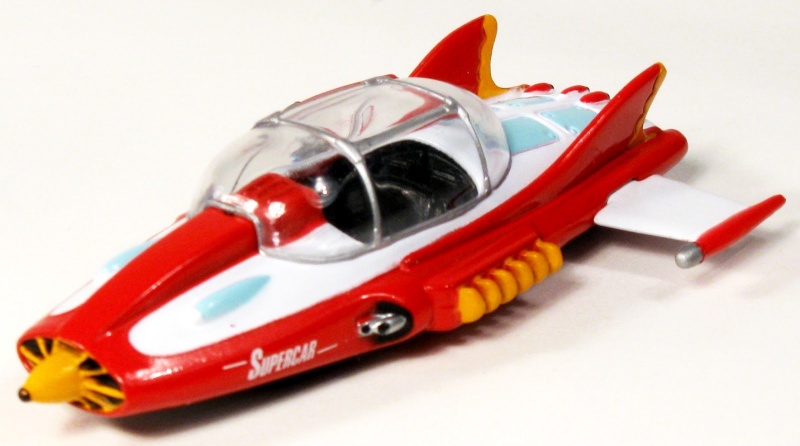 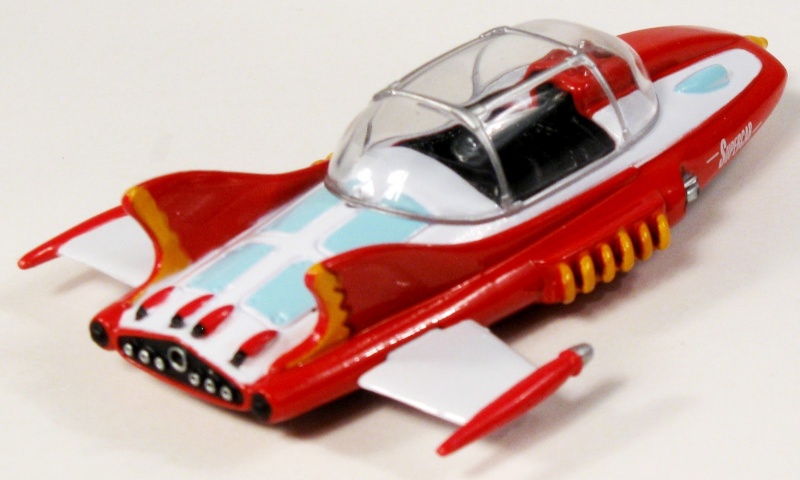 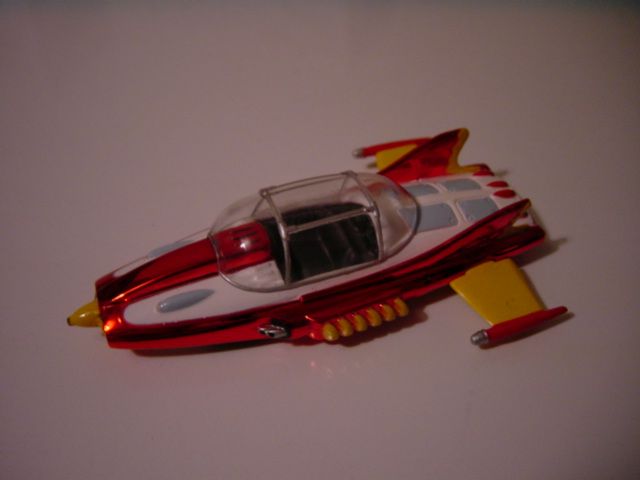 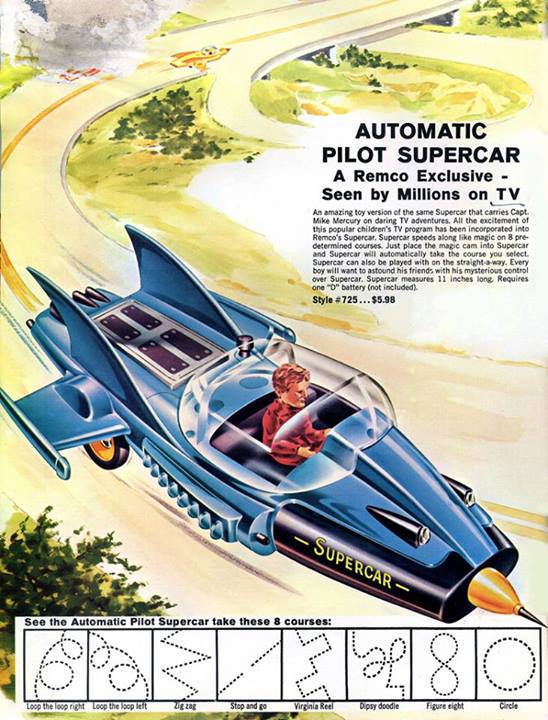 Allan Industries Ltd. Supercar Magnetic Adventures. This painted magnetic board featured cardboard cutouts of different characters from the show, such as Prof. Popkiss, so you could create your own Supercar adventures at home.

Merit Supercar Intercom from 1962. The set includes two handheld plastic ‘speakers’ connected with a length of wire to help you communicate with friends. Basically, it’s a glorified pair of tin cans attached with a bit of string… but given a futuristic makeover! 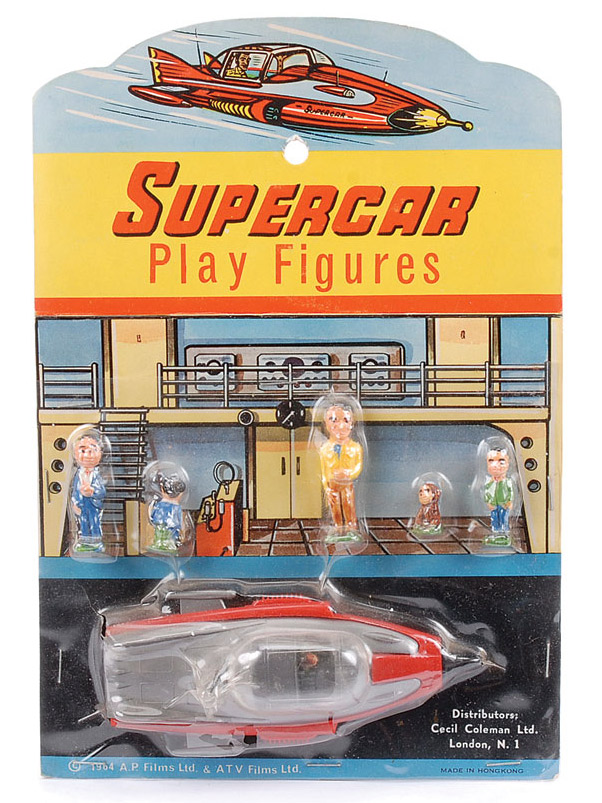 Cecil Coleman gift set made in Hong Kong in 1964. This incredibly rare set includes five plastic miniature figures of Mike Mercury, Jimmy Gibson, Dr. Beeker, Mitch the Monkey and Professor Popkiss, along with a replica of the Supercar. This particular set sold for £540 at Vectis Auctions back in 2009. 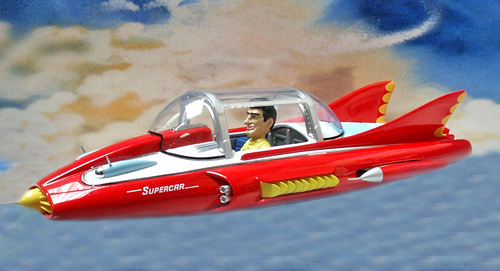 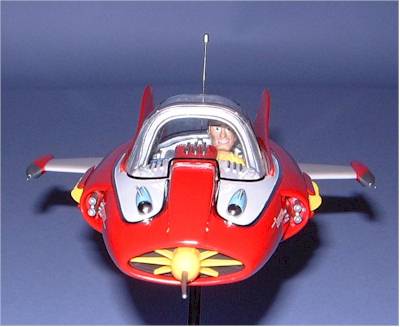 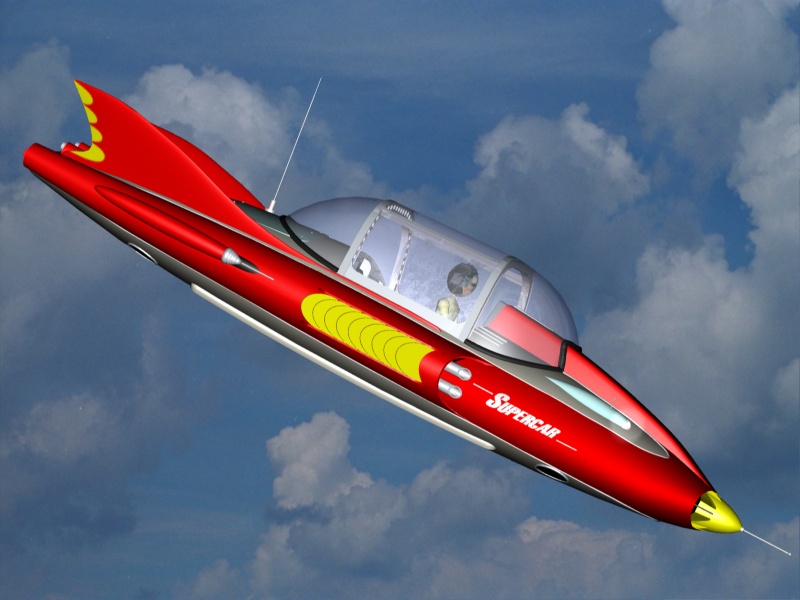 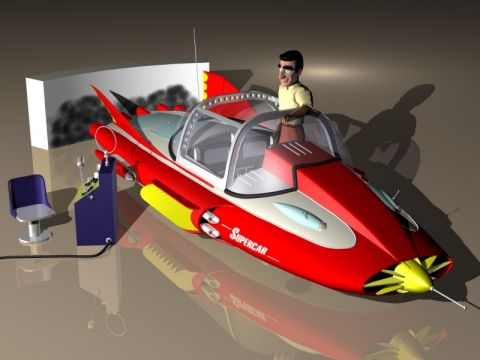 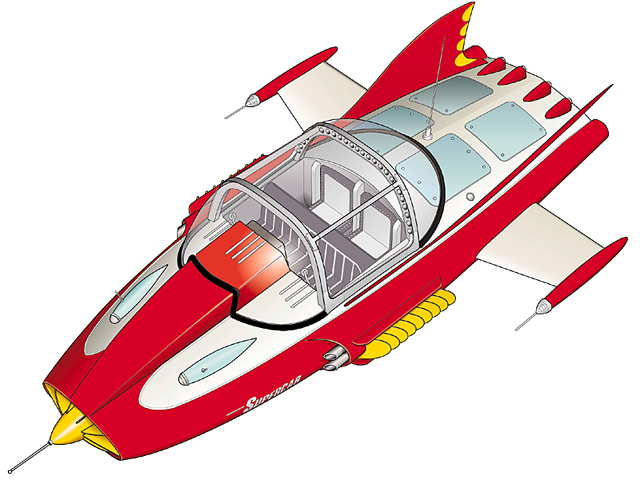