Out of Sight is a 1966 beach party film with elements of the spy spoof. It is the third and last of a series of films geared at teenagers by director Lennie Weinrib and producer Bart Patton for Universal Pictures. Perhaps inspired by the success of the American International Pictures' teenage films, as well as Weinrib and Patton's Beach Party knockoff, Beach Ball, Universal and MCA signed a contract in 1965 for the pair to make 14 rock and roll films in a two-year period; however, the only ones produced were Wild Wild Winter and this film.This movie is the only onscreen appearance of The Turtles in a feature film.
John Lodge, who plays John Stamp, never reveals his face onscreen.
Although Bob Eubanks is listed in the opening credits, he does not appear onscreen at all - only his voice is heard as the announcer at the concert.
Weinrib's directing career consists of only three feature films - all in the beach party genre: Beach Ball for Paramount in 1965, and Wild Wild Winter and Out of Sight, both for Universal in 1966.


deux véhicules de barris :
Burbank auto customizer George Barris was given four weeks to supply vehicles for the film that was made from a left over Munster Koach fiberglass body.The top was removed,the rear engine was moved back in the square tube frame,then the second engine was place in front of the rear engine.The body after finished altering it,was channeled over frame.The body was cut after the first doors,then the rear section of the body was moved forward. They had to make both slender doors buy using the third rear doors and the front doors. After getting the right measurements they made the new doors. Then they put gold naugehyde on the doors and spare tire carriers.The top in back is just side pieces,A lid had to go over these side pieces to fit. They put pompoms around this rectangular lid.The windshield frame was angled forward,with another frame to meet the to touch the top of windshield frame to make an open triangle.The car was called the ZZR that was equipped with a variety of weapons in the manner of James Bond's customized Aston Martin DB-5 in Goldfinger. The $22,000 ZZR featured two 425 CID Buick engines bored out to 440 CID engines mounted in tandem with an Ansen Posi-shift Powerglide transmission with two carburators per engine with a four holed injector scoop.The rear scoop was higher because it had a caddy air cleaner underneith it. M/T tires mounted on far 12" Radirs Star Mags front and One Ribbed for rear .M/T Dirt Tires for traction on the beach sand), a Cal-Automotive kick channeled is mounted on rectangular tube frame with deal radiators.The brass custom grill was $5,000 to make.The headlights are mounted vertically beteeen the fenders in special designed nose with headlight shell.It is painted lilac,and matches rear fenders.The rest of the body is in gold. A complete arsenal in the rear trunk area is stocked with handguns, tear gas, hand grenades, telescopic machine gun, tar squirter, feather blow gun, and “skid juice” spray nozzle. Rear fenders house flame throwers, while bullets are fired from the front fenders.

Dobie Gray sings the title song, "(Out of Sight) Out on the Floor" (written by Fred Darian and Al De Lory).

The Knickerbockers perform “It's Not Unusual” (written by Gordon Mills and Les Reed).

The Turtles perform "She'll Come Back" (written by Nita Garfield and Howard Kaylan). 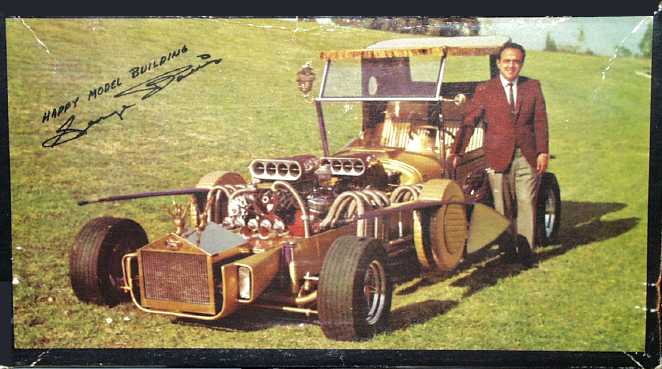