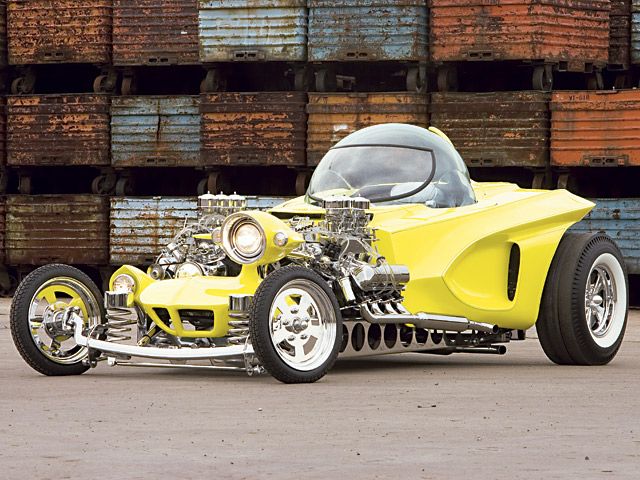 For this story to make any sense, there's something you must know about Ed Roth's Mysterion: It's long gone. "But ..." you implore, "what about this yellow thing here?" Well, this "thing" is the fruit of a belated effort--and one hell of a story that begs to be told. We're short on space, so let's fly. We'll start with the history. 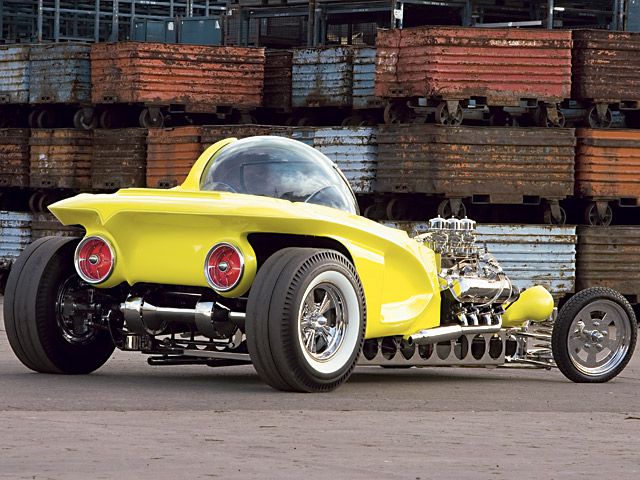 Ed built the Mysterion in his Maywood, California, "Studio" in 1962. He and righthand-man "Dirty" Doug Kinney built the outlandish body and nose by Roth's patented "spitwad" method and shaped it to a figure that appeared exclusively to Ed. He then laminated the plaster buck with a resin-soaked fiberglass mat and once the resin kicked, Ed and Dirty chipped the plaster buck out of the "body." Ed then left Dirty Doug with sharp tools and explicit instructions: Make it smooth. Unorthodox? You bet ... even by today's standards. 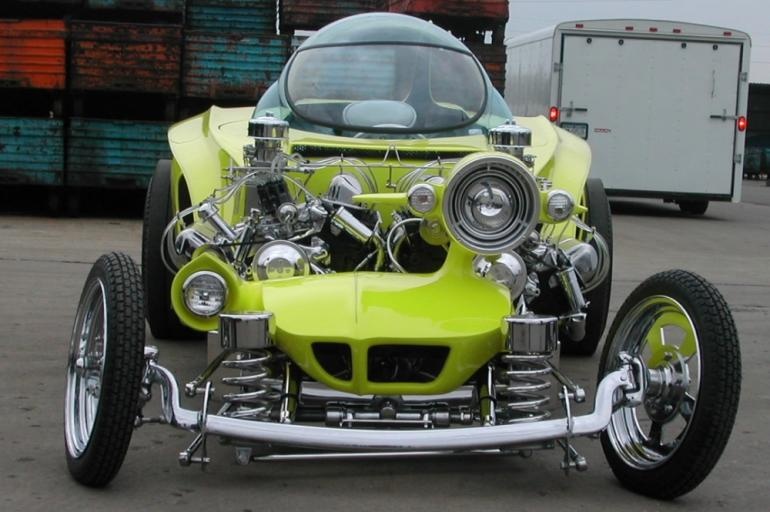 Ed found extreme success by topping his prior creation, the Beatnik Bandit, with a blow-molded canopy--an especially appealing feature to kids raised on B-grade sci-fi films. He repeated the same canopy on the Mysterion, although with a twist: He had the Mysterion's bubble blown in a tripartite shape. The Mysterion was just as bizarre under its alien skin. In his inimitable fashion, Ed cobbled up a set of framerails from what some speculate as C-channel trailer rails. To give the rather slabby sides a bit more character, Ed and Dirty drilled a series of holes down the sides to emulate some of the "lightweight" cues they found on contemporary dragsters. 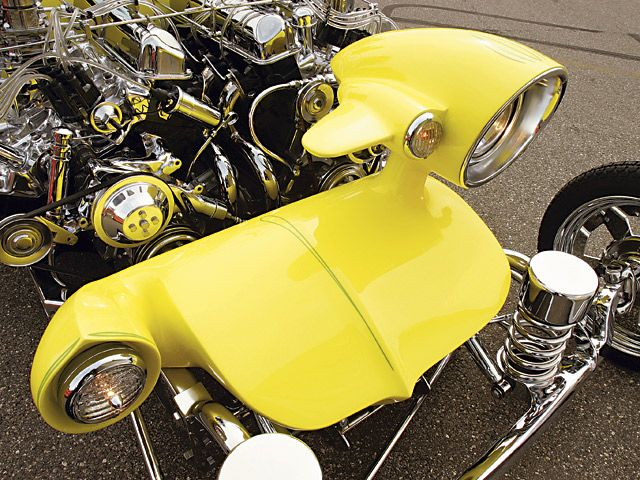 Ed found even more inspiration in dragster practice. The NHRA banned "exotic" fuels (nitro and alky) between 1957 and 1963. The act initiated a fairly bizarre practice: Top-class racers, in an ever-increasing need for speed during the prohibition, resorted to stuffing multiple engines in their diggers. That more-is-better philosophy aligned perfectly for wild-man Ed Roth, so he sourced two Ford FE-series engines (ostensibly 406s, but it's probably show talk) and crammed them between those drilled girders. As if that wasn't enough mass for the little car-to-be, consider that he mated each engine to its own Ford-O-Matic slushbox. Then he did something absolutely preposterous to anybody who's ever driven a banjo-axled Ford: He transmitted all that theoretical power to a glass-axled rearend made from two banjo centersections. 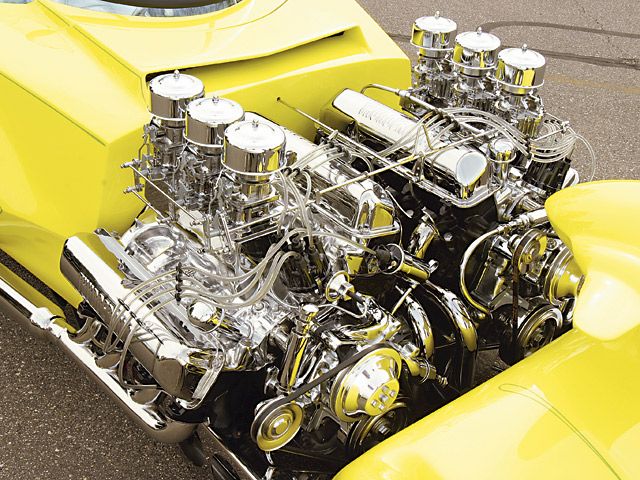 The frontend, while still unrealistic, portended the future to a degree. Ed cut flanges and welded them to a stretched Ford axle. He drilled the flanges and located the axle to the frame with--get this--four articulating links (Sprint Car practice at the time, yet it didn't reach the hot rod world at large for almost a decade). He sprung the front with fabricated cups and coil springs of surely indiscriminate spring rate. He lopped the backing plate flanges off the spindles and fabricated wheels from flat-plate centers and 16-inch cycle hoops. In what must've amounted to an exercise in restraint, Ed painted the engine blocks, heads, and transmission cases black. What didn't go black went straight to the plater's. The body and nose got a very out-there greenish-yellow paint. The Mysterion's interior didn't fail to impress, either; it featured yards of what looks like Sasquatch hair in lieu of carpet. Contrasting the rather drab hair was a single contoured seat sheathed in metal-flecked vinyl. The Cragar steering wheel only accentuated the spangled cockpit. 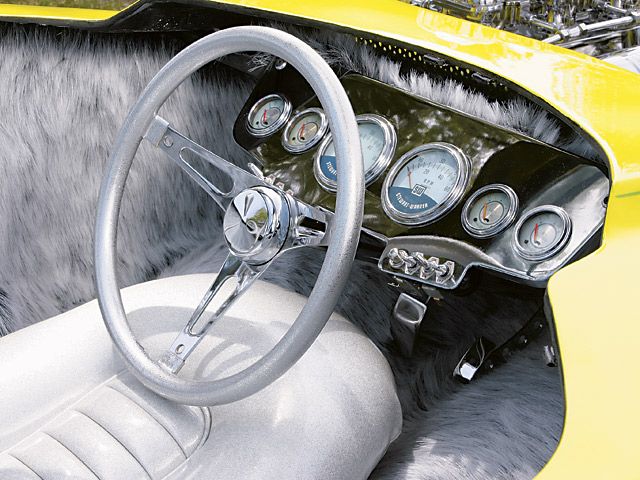 The steering wheel and seat interference should give a good indication to the Mysterion's tractability. The wheel is a genuine Cragar piece. The gauges are uncommon Stewart Warner Twin Blue dials.Understandably, the Mysterion hit big. It appeared on the cover and inside the September '63 Rod & Custom cover, as well as numerous other magazines, and even on and inside a how-to book. Various publications illustrated the Mysterion's comfort (or abject lack thereof) by virtue of a very massive Ed Roth or two very svelte ladies crammed under the bubble. Eventually Revell scaled down the Mysterion and offered it as a kit to every aspiring Mysterion owner. 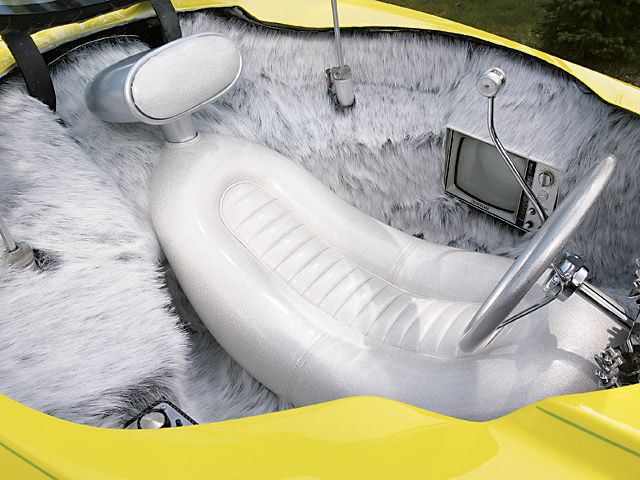 Ed peddled the car for a season and showed it at all the big venues. Eventually he cut a deal with Bob Larivee Sr. (Bob relinquished the Beatnik Bandit and another car for the show-stopping Mysterion). Ed must've known what he was doing, for Bob to this day refers to the Mysterion as "a total piece of sh--.""It broke all the time," he says. "The weight from the engines alone constantly cracked the frame--and that was from riding in a trailer from show to show!" After numerous ad-hoc repairs at various venues, Larivee divested himself of the Mysterion. Someone eventually parted out the car and it ended up in the Midwest. Bill Roach purchased the empty shell and nose in the '70s from a bank that lost big on a shyster. The body eventually horse-traded back to Ed. Ed, who wasn't particularly fond of looking back in the first place, wasn't entirely happy to steward the car a decade after its glory. According to Bill, "At one point while Ed was driving the car across country, he talked about pulling over on some interstate and setting the body on fire and calling the cops to report a spaceship crash." 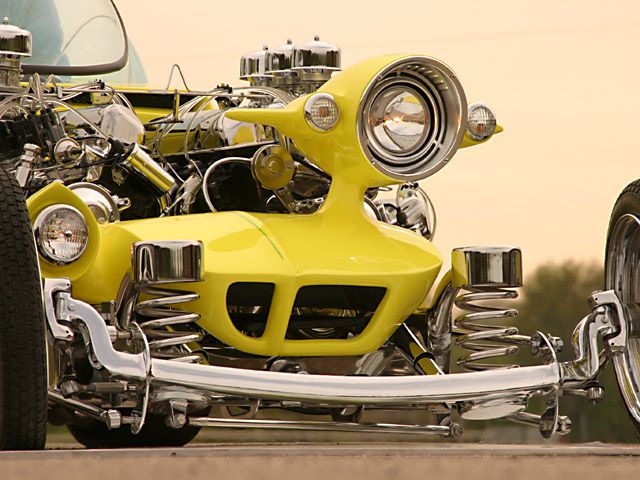 While a succession of trades lost the Mysterion to time, the loss didn't faze Roth devotee Mark Moriarity. For those who haven't heard, Mark's the consummate Roth collector. He not only dedicated a room to Roth in his Minnesota home, he dedicated the whole damned house to him. Along with enough ephemera to choke a horse, he has Ed's Road Agent and a sickeningly faithful clone of the Outlaw ... in his living room. 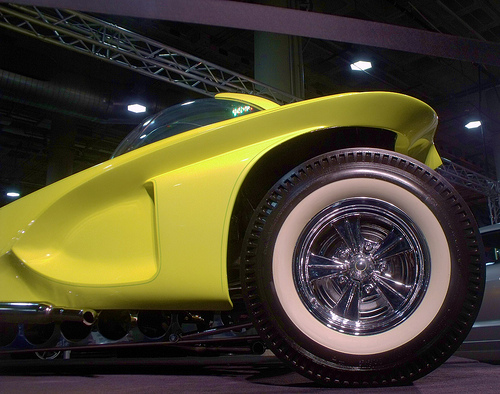 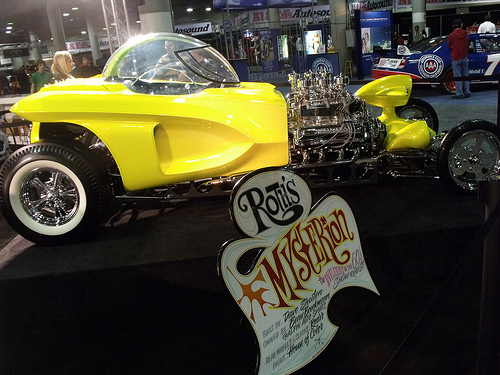 Dave is one of those collectors who should be on Ritalin; he collects everything. He's not some come-lately rich guy who just discovered cars, either; he's a die maker at Grand Rapids, Michigan's GM plant and he bleeds 30-weight. In his defense, he's incredibly devoted ... to cars. Working from grainy magazine covers, model box tops, and faded book pages, Dave very faithfully reassembled the "new" Mysterion. He scanned and measured the images and re-scaled the model kit back up to 1:1 proportions-off GM hours, of course. 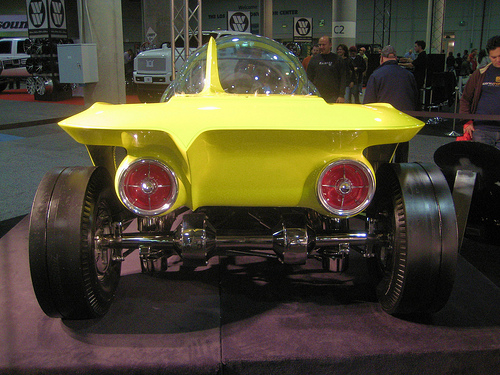 Dave found six Stromberg WW carbs to match the Mysterion's and fabricated wedge-shaped boxes to level them over the vintage Edelbrock 3x2 manifolds. The exhaust plumbing is a near work of art. It required numerous bends and elbows and countless splices. The two inboard headers snake around between the engines.What Ed chose out of convenience 40-plus years ago proved difficult to find in the new millennium. The four-link frontend, for example, used 16 '63 to '67 Corvette tie-rod ends--of which Shuten found in new old stock parts bins (eat your hearts out, Vette snobs!). Those six carburetors atop the engines aren't exactly common, either; they're Stromberg/ Bendix Model WWs from '50s GMCs. Ever seen a silver-flaked Cragar wheel? They're rare, pal. How 'bout Twin Blue Stewart Warners? Fight over 'em with the eBay snipers for a while. We won't even get into how valuable NOS '62 Sport Fury headlight bezels became over the years. 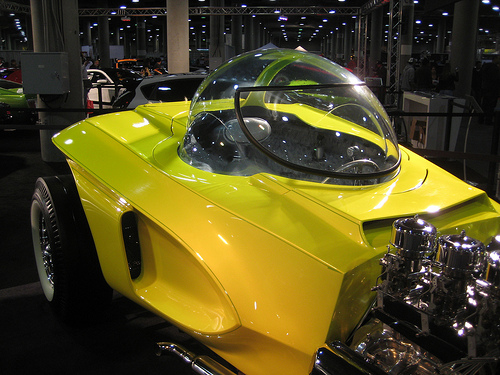 The most difficult part of the resurrection: "The bubble," Dave says. He built the form and headed to Lakeville, Minnesota's Masterglas--the same cat who blew the bubbles for the Futurian and Road Agent's restorations. In all, "it took us three trips, 13 tries, and I can't tell you how many tooling changes for that damned thing." 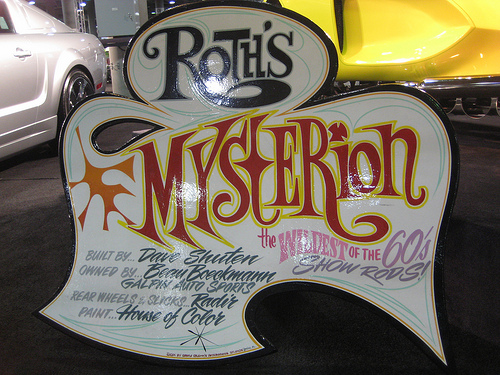 The rest, while labor intensive, proved obtainable. He spliced the two '46 pickup rearends. He filled and ground a stretched axle. He trimmed what Ed did. He also polished everything himself--six decades of pits and all. Steve Sours merely dipped already-polished parts. 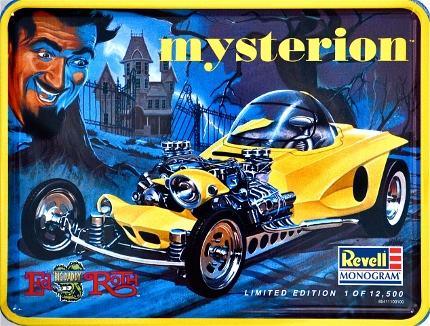 The interior is an exercise in '60s kitsch. Dave found a reasonable facsimile to Ed's gorilla hair. The television is a 1962 solid-state Panasonic unit and features a whopping 8-inch screen.Dave blocked the body and sprayed it House of Kolor Stark White with clear. Along the way, Dave acquainted himself with New York-based painter and nutcase Fritz Schenck--himself an Ed Roth devotee on a quest of his own (see his story on his Roswell Rod on page 54). In the very cold Michigan winter (January 15 to be exact), Fritz drove in from the coast and laid down some eyeball-blended HOK Kandy Lime Gold with white pearl in an impromptu booth in Dave's garage. Fritz also 'striped the body. 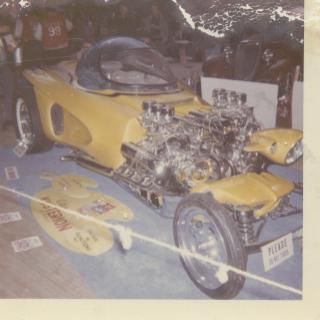 Dave reassembled the car with a number of correct parts. He found an early Panasonic solid-state TV. He animated the bubble top with hydraulic rams. Seat Covers by Stews clad the alien-looking seat in silver Zodiac vinyl. The wheels were no easy task; Dave plasma-cut the flat plate to form the centers for the fronts. He then welded them to 16-inch motorcycle wheel blanks. Radir Wheels cut an offset groove into a set of 8.20-15 slicks. Dave even talked a very hesitant Rich Conklin into chroming a set of 15x8 Radir hoops for the application. 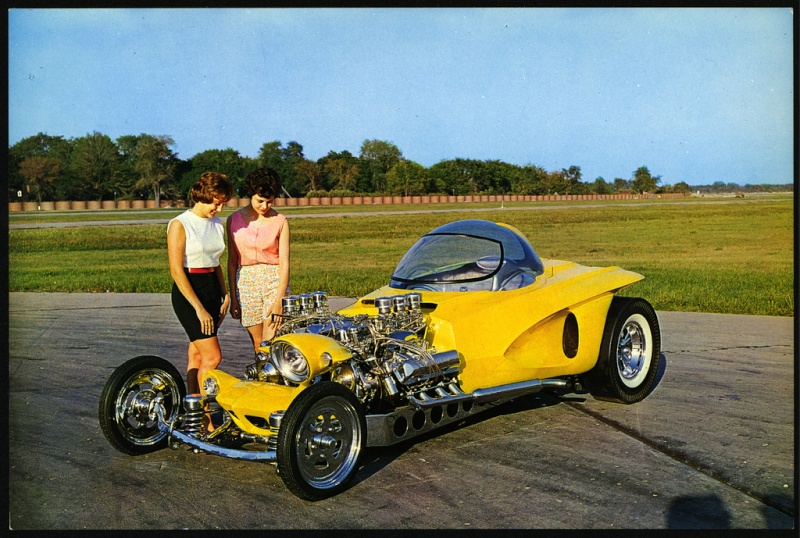 Dave debuted the Mysterion along with Fritz's Roswell Rod at the 2005 Detroit Autorama to great review. As a matter of fact, the only other displays to boast larger crowds that weekend were the Ken Reister/Chip Foose Ridler Memorial winner and a patriotically themed monster truck--each of which eclipsed both bubble-topped cars combined by well over tenfold cost-wise.

Dave fabricated this rearend... read full captionDave fabricated this rearend from two '46 Ford pickup axles. The hindquarters required '61 Galaxie taillights.In closing, consider this: Forty years after Ed Roth built a frivolous car that showed briefly at best, a 30-something kid with a family and mortgage painstakingly collected, modified, and made the parts he needed to faithfully recreate it. Roth would've undoubtedly shook his head and asked why the kid didn't build something of his own design, however, I don't think even Roth fully understood his impact on American pop culture. 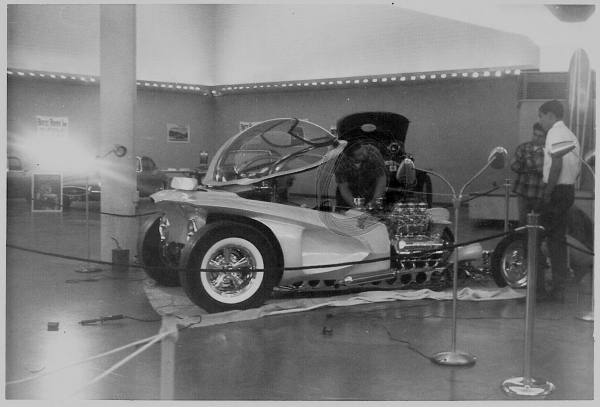 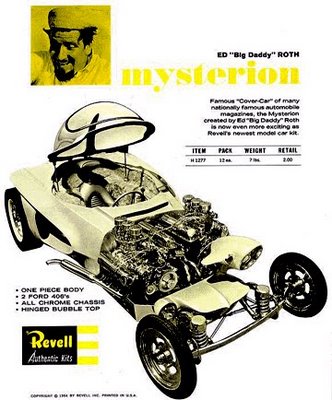 We don't have Ed Roth walking around anymore; we only have his stories and artifacts to remember him by. The prospect that someone would make the effort to give us something that was lost to time and the idea that it still strikes awe in showgoers four decades after its salad days is an endorsement of Roth's significance. It's for that reason that we thank you, Dave, and your patient wife, Michelle, for a job very well done. 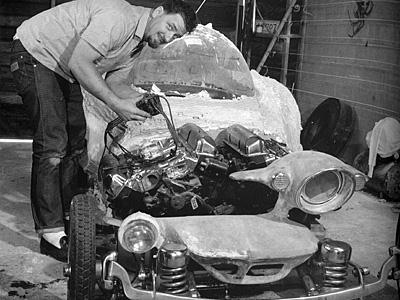 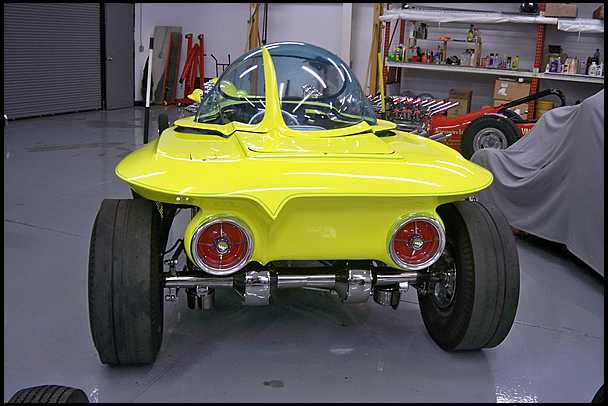 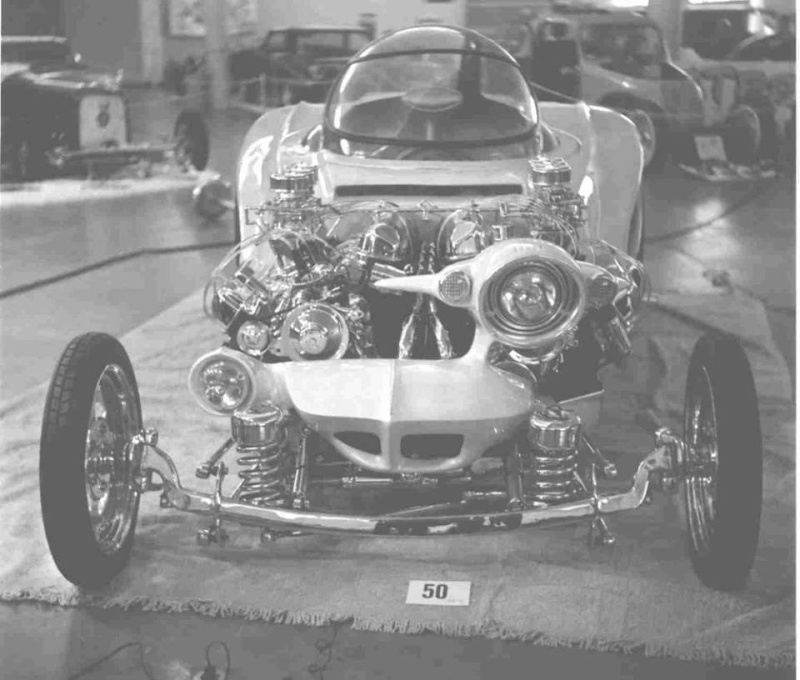 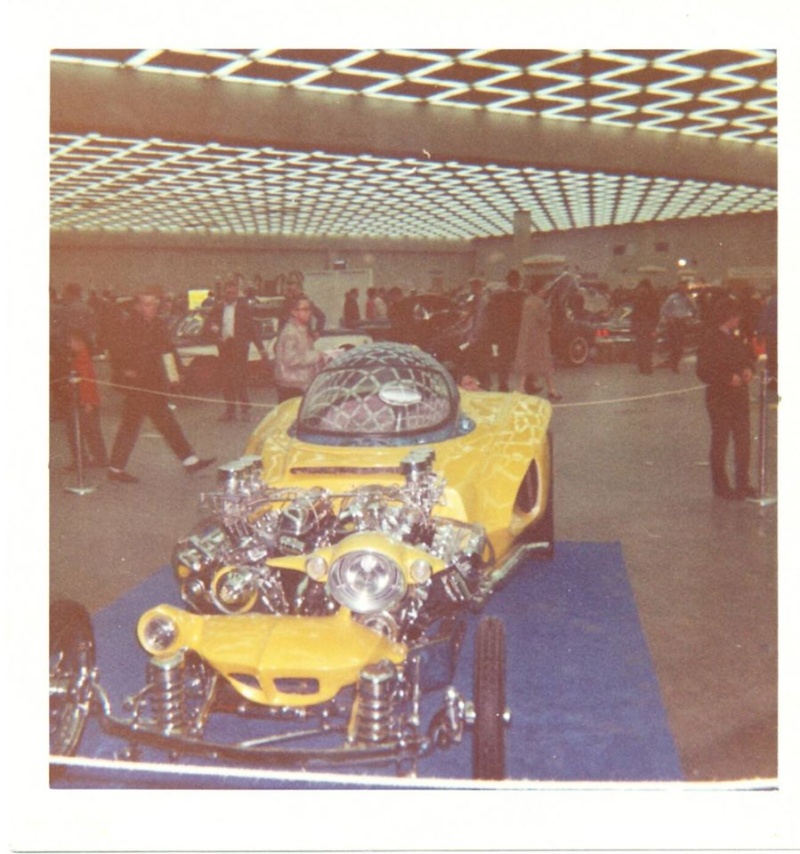 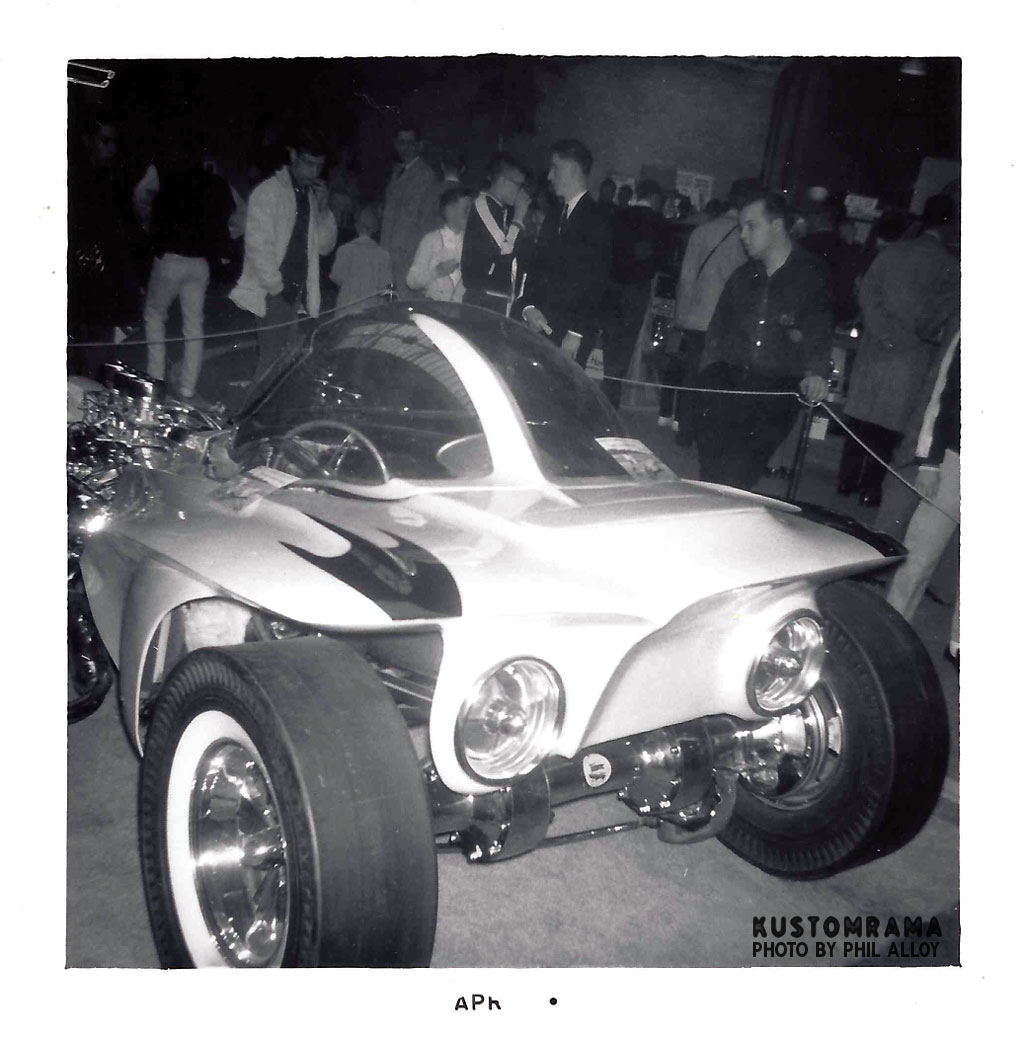 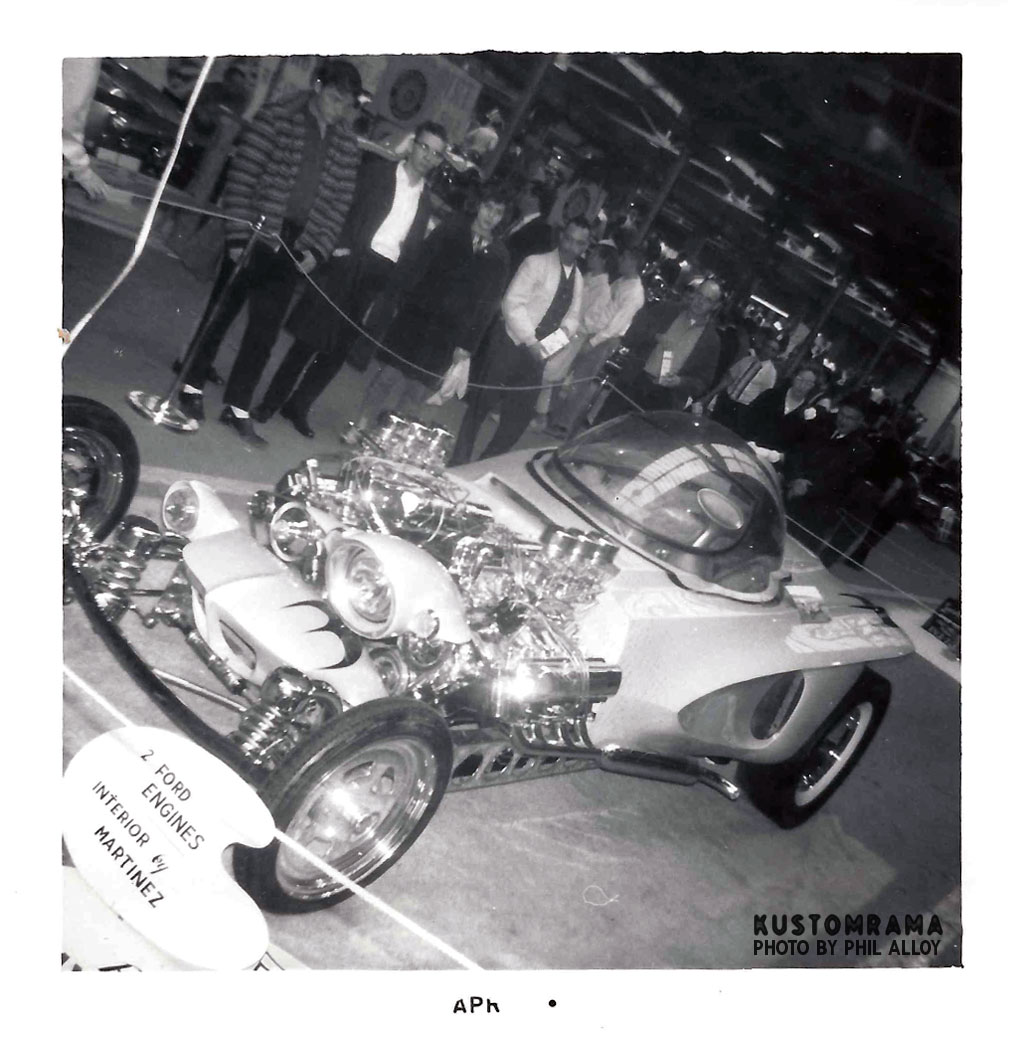 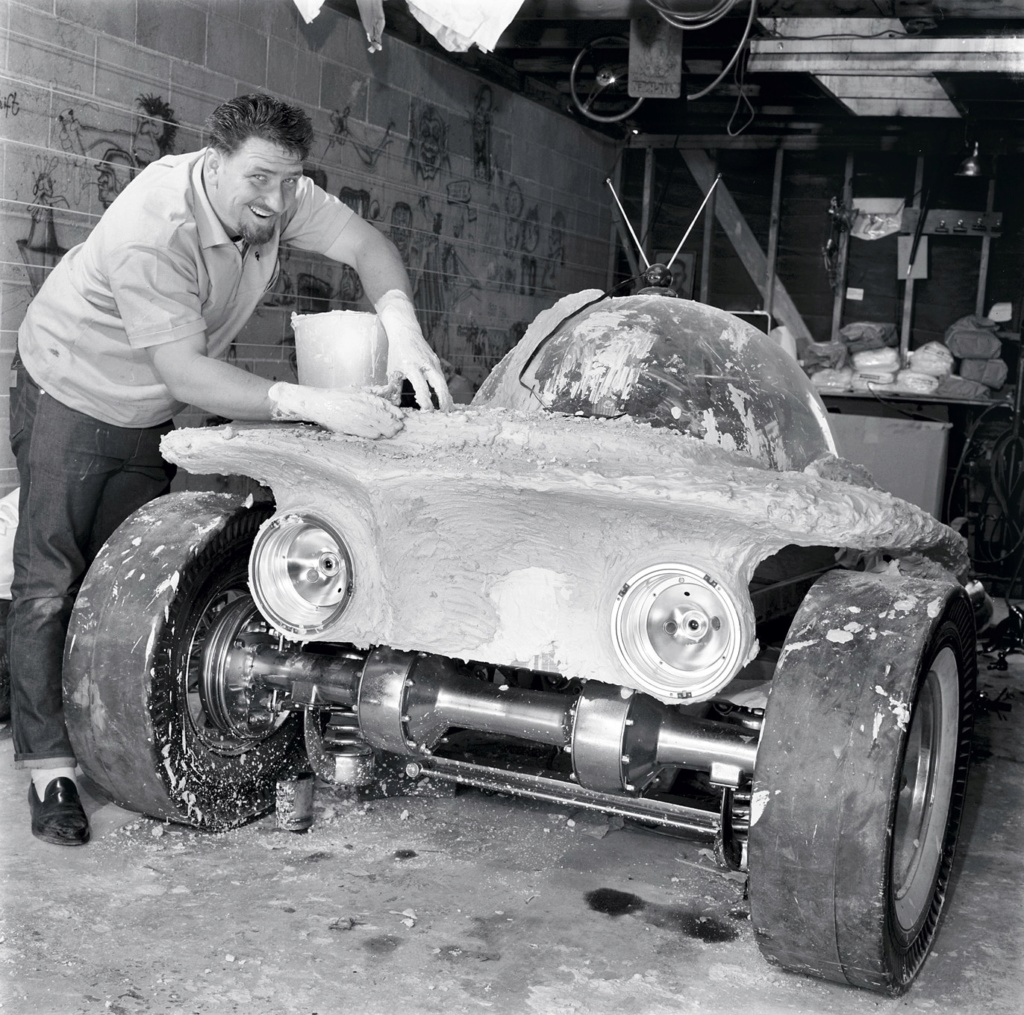 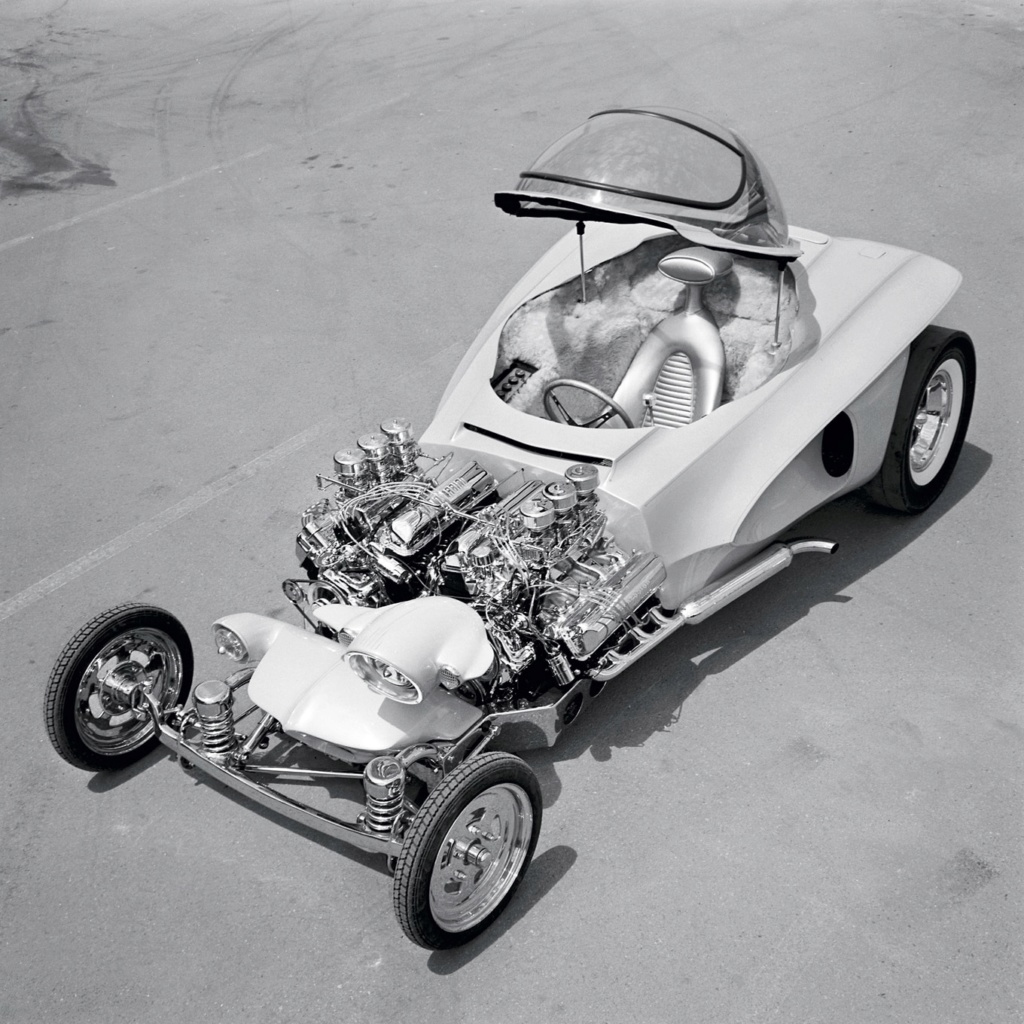