Andy Wickenheisser's 'The Gas Bubble', a Roth-inspired '63 Fury gasser with a built Wedge. Zoomies out the hood provide the show... Love it!! 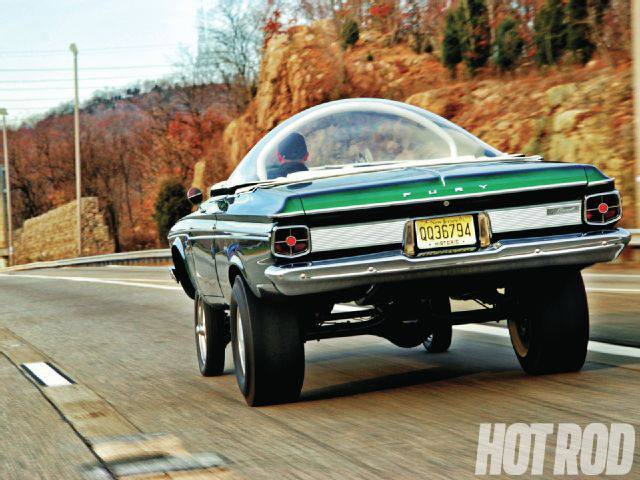 ndy Wickenheisser is afraid to drive his cars. More accurately, hes afraid of what might happen when he drives his cars: Too many gawkers not paying attention to their own ride and causing problems when Im out driving, he says, and its a big issue, as Ive caused quite a few accidents unintentionally. Its not just this car, its all of my rods. No surprise if youve seen Wickenheissers self-built collectionone that includes some pretty hairy street freaks. His last creation, a 61 Dodge Pioneer wagon dubbed Bad Gas, is one jacked-up, hellacious ride. His new custom, this dome-top 63 Plymouth Fury, is more of the same, and then someexactly what weve come to expect from the man they call Wick. Gawkers, move overwe want to go for a ride. 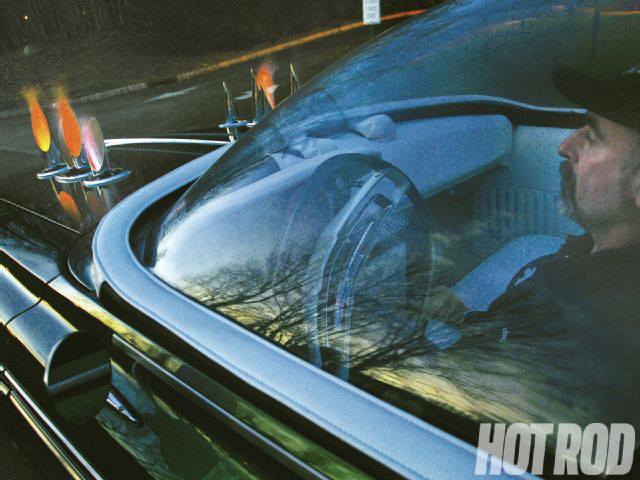 In an empty parking lot, were waiting for Wick to arrive. Soon, the pipes of the Fury can be heard in the distance, and when the Plymouth enters the lot, the six cars following him resemble a pack of remoras leeching off a metallic-green tiger shark. As he brakes to a stop, camera flashes pop like disco strobes in the dark. The stout Mopar Wedge shuts down, and almost on cue, the crystalline dome covering the cockpit slowly levitates like something out of a late-night science-fiction flick.
Wick hops out and a woman with three small tykes in tow asks the typical questions: Is that thing legal to drive? Think so, Wick answers. OK, what is that thing? These are the queries to expect when you refuse to drive a boring car. Wick answers some and leaves the rest to the viewers imagination. 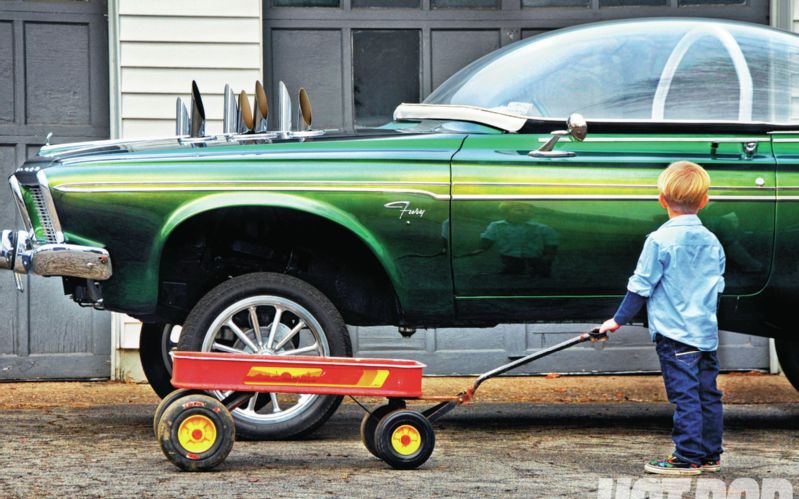 Inside the car, Wick hits the magic button, and the dome slowly descends around him. Thumbing the D on the push-button trans selector, hes off to a busy local route, drawing a hefty amount of attention from the start. The zoomie pipes are gloriously rowdy, and nearby drivers break several major New Jersey traffic codes just to inch-in closer. It gets hairy real fast, and Wick realizes its a good time to hit an exit. As he winds down the offramp, a gaggle of bikers practically wet their chaps. The Bubbles got four times the cylinders and four times the pipes as their mounts. They want more of a show, but Wick has things to do; a twisty road through the Appalachian foothills is calling.
The big Fury winds through the constantly snaking road, carrying within its 2-ton package all the creature comforts of a big luxury Chrysler; its like a fullsize magic carpet but with a big, bad Wedge motor underneath the fabric. The interior is pretty cushy, with a big, overstuffed bench seat, done in classic tuck n roll, that cradles its passengers like a favorite Sunday game-day sofa. The Bubble is jacked up pretty high, and the pilot is eye-to-eye with a Dodge Ram driver. Underneath the dome, there is a sense of vehicular vertigo brought on by sensory overload. There is nothing to impede total observation of the quickly passing scenery. As a passenger, shutting your eyelids for a few seconds helps one regain equilibrium. The driver cant afford that luxury. 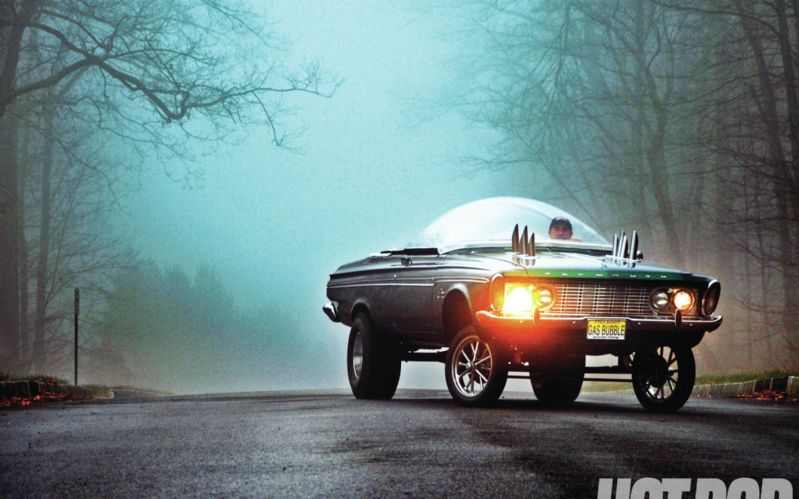 As he cruises, Wicks on the wheel, constantly correcting the skinny Radir 4-inch-wide 12-spokes up front. The big Plymouth B-bodys front end dwarfs the skinny pizza-cutter tires, making them appear even smaller than they are. The car has a semi-stiff ride and Mopar one-finger power steering up front. Its surprisingly controllable. Even in tight turns, theres no wheelhop out back. The 15x10 Ansens shod in Radir piecrusts grab the road, and hold just right. 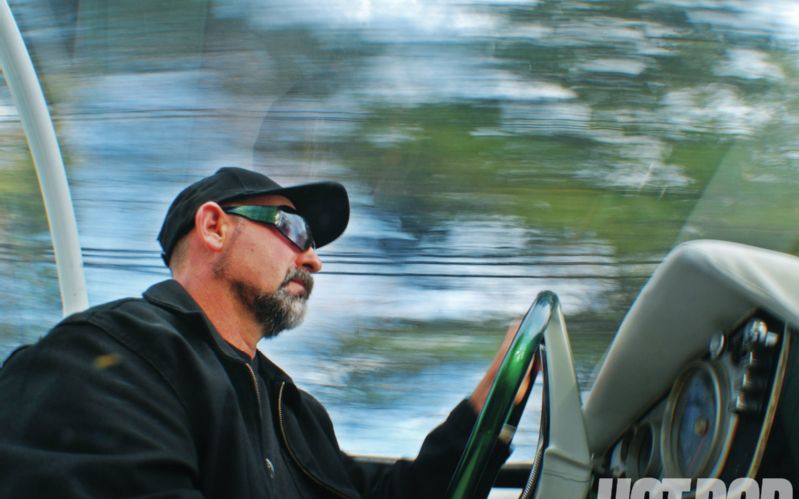 The overcast day, which had helped keep the inside temperature cool and comfortable, suddenly gives way to a spell of bright sunshine. Rapidly, the Bubble starts warming up inside, as there is no tint in the Lexan to filter out the suns rays. With only floor vents pumping in air, the temperature rises quickly, going from cozy to stuffy. With no windows, there are no cranks to reach for. And theres no air conditioning; Wick just hopes for clouds and shade. 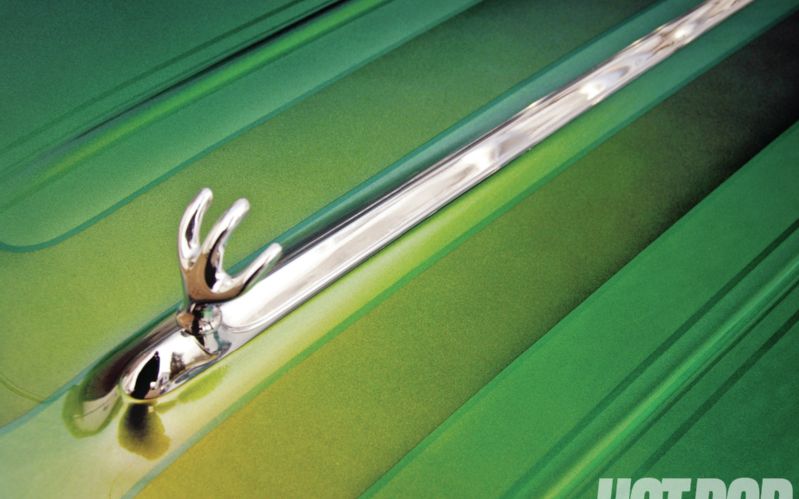 The Bubble rolls into the old industrial town of Boonton. The narrow gorge of its Main Street acts like a cheerleaders megaphone, pushing and blending the low notes of the Wedge into a reverberated orchestration of low-end torque tones. The locals notice. A pack of pre-teen skate punks on the sidewalk starts paralleling the Fury. The kids want Wicks attention. He tries to play them off. 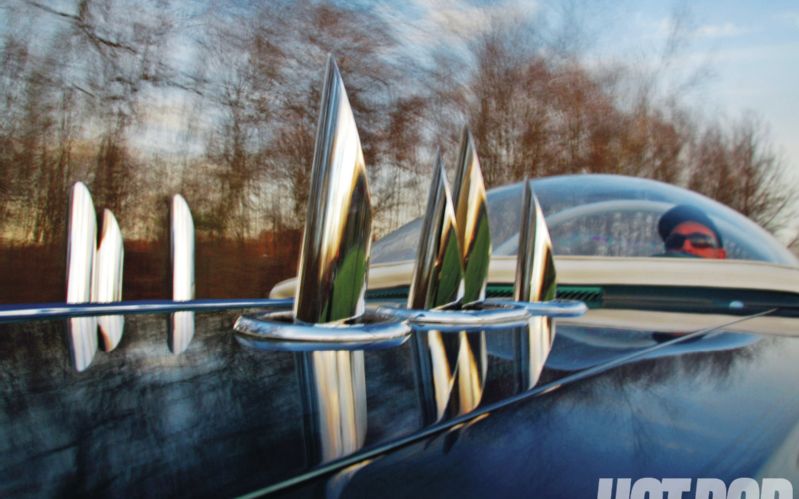 Are you an astronaut? one blurts out. The rumble of the Wedge makes his voice almost inaudible. Hey Jetson, does that thing fly? he yells a little louder. Light em up, light em up, they start chanting. Wick thumbs the Neutral button and drops the hammer. The roar of spent gas sounds explosive. Wick knew it was coming, and even he was startled. The kids facial expressions run the gamut from intensely frightened to utter adulation, all in a split second. They cheer with approval. They beg for more. But like any good performer, Wick leaves them wanting an encore. He needs to get out of this town.


After touring a few more miles of backroad, Wick is itching to open her up on the highway. He hops on I-287 and heads into traffic. He punches the pedal, and the Fury chants its tune, echoed off the 18-wheelers we are passing. The 727 shifts flawlessly as we head up the tach, and the Carters four-barrels are wide open. The chromed fireplace poker Wick chose for his hood ornament rises above the horizon line as the already-hiked-up nose lifts for the sky. 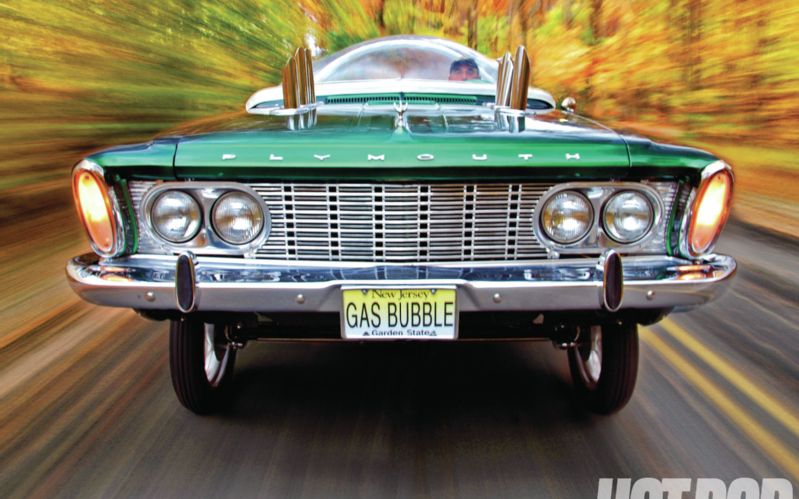 Then, suddenly, the nose drops. Wick races for the shoulder as the 383 dies. Hes pretty sure he knows what it is. Fuel pumps not working out back. He pulls the fuse and holds it up to the light. Theres a pinhead-size blister on the fuse, so small that mere mortals might not see it. Its a defective fuse, he says. The guy must eat lots of carrots, because the blemish is so minute that most people would have passed it by. Boy Scout Andy Wick has another fuse ready to go.

We continue on our way, picking up more gawkers every quarter-mile. Inordinate attention is the price you pay for having a street freak with a bubble for a top. How did he get the idea for the top? Did it come to him in a Darryl Starbird, Ed Rothinfused dream sequence? It just made sense, Wick says. I received the Fury with a broken windshield and needing a new convertible top. Factor in the price for both, plus the labor, and the cost of building a dome top for the car is practically covered. I really wanted to push the limits, and wanted to top my previous builds, so the bubble was the right thing to do. I immediately cut off the A-pillars to force myself to continue with the game plan, and there was no turning back at that point.

The top was mocked in Styrofoam, and Wick built the template himself. He also fabricated the steel frame to cradle and stiffen the finished bubble. The template he made was then sent to California for the shaping of the Lexan. He had a few made, just in case. The top motor was a stroke of genius. Unlike bubbletops of the 60s, Wick wanted the top to lift from the front, and under full power. Being a landscaper by trade, he looked no further than his work truck to find the torque-abundant, electric-over-hydraulic snowplow motor that would handle the job. He first fabricated a steel cage under the dash for the motor to live in. Next, crucial modifications were needed on the motor itself. Wick pulled it apart and re-baffled the fluid passages to slow down the lift. When that didnt suffice, he located a 6-volt battery to run the motor at half power to drop and raise the dome more cautiously. 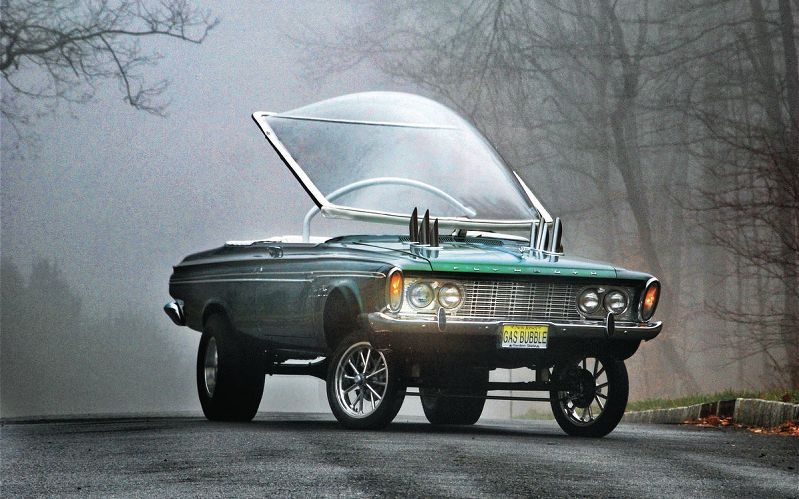 As Wick explains the nuances of snowplow motors, a 69 Camaro RS with big-block callouts and low-profile tires pulls up even with the Bubble. Its tinted windows hide the passengers, but we can tell they are very interested in our ride. No rev ups, no prodding for a race, just an even ride-along while they check out the Mopars nuances. Wick wants to share pleasantries, but the lack of windows in the Fury makes that impossible. The Camaros passenger window drops down, presenting just enough space to pass a thumbs-up.
Aside from the roar of the motor, the Furys ride is pretty quiet, even at high speeds. The slickness of the spherical top offers very little wind resistance, hence the quiet, near total lack of that typical A-pillar/windshield-generated racket. Wick says its a joy hearing the big-block roar without all the white noise. 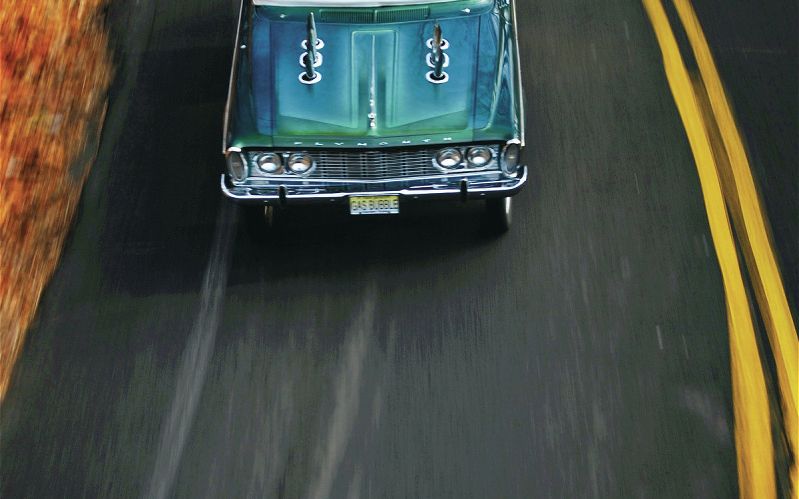 We decide to make a pit stop at the Hot Rod Farm, good friend Rich Conklins wayward home for car freaks and HQ for his Dead Mans Curve Car Club. Its an actual farm, and fall festivities are underway on the premises. Wick parks the Bubble, rounds up a drink, and takes a well-deserved break from the road. The Fury is surrounded immediately. Its a bigger attraction than the pumpkin patch on this fall day, and Wick loves the oohs and ahhs coming from the kids. One young car buff blurts out, Look mom, a real Hot Wheel. Wicks got a grin from ear to ear, and his chin is vibrating. Thats the best compliment I could ever get, hands down, he says, half choked up.
Its getting dark, and were on the road home. The engine revs high as we crest a short rise, then Wick backs off and the motor gurgles, spewing short flames through the zoomies. They light up the road for a second. Rolling back into the parking deck, rain droplets speckle the dome. Wick still hasnt figured how to put wipers on this thing. Give him some time. 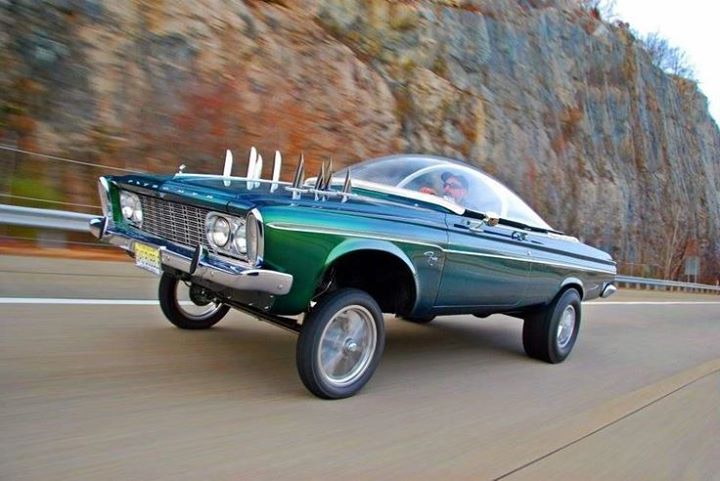