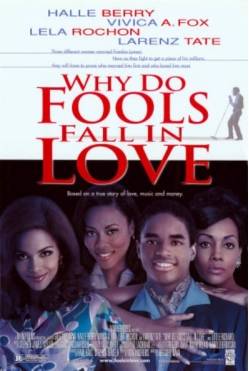 Présentation:
Why Do Fools Fall in Love is a 1998 American romantic drama, directed by Gregory Nava and released by Warner Bros. Pictures. The film is a biographical film of the brief but intense life of R&B/Rock & Roll singer Frankie Lymon, lead singer of the pioneering rock and roll group Frankie Lymon & the Teenagers for one year. Moreover, the film highlights the three women in his life, each of whom claim to have married Lymon and lay claim to his estate.

Written by Tina Andrews, Why Do Fools Fall in Love stars Halle Berry, Vivica A. Fox, Lela Rochon, and Larenz Tate, who portrays Lymon. Little Richard also appears in the film as himself.

Scénario plus détaillé:
Lymon was thirteen years old when the teenage group Frankie Lymon & the Teenagers erupted from radios and jukeboxes with their 1956 hit, "Why Do Fools Fall in Love?" and appeared in the movie Rock, Rock, Rock (1956).

After Mr. Rock and Roll (1957), Lymon started a solo singing career, but it all fell apart. Lymon's career was over by the time he was eighteen years old, and he died of a heroin overdose seven years later.

Jumping from the 1950s to the 1980s, the film traces the rise and fall of Lymon (Larenz Tate) in a series of flashbacks as courtroom claims on Lymon's royalties are outlined by three women: Zola Taylor (Halle Berry) of the Platters R&B group; Elizabeth Waters (Vivica A. Fox), who loves her pet dog (who Lymon kills by mistake, when it bites his hand after threatening to throw it out a window during an argument between him and Elizabeth) and who became a prostitute to cover the costs of Lymon's recovery from addiction; and schoolteacher Emira Eagle (Lela Rochon).

The film ends with Emira winning Frankie's estate, although Elizabeth was named the legal surviving spouse of Frankie Lymon.