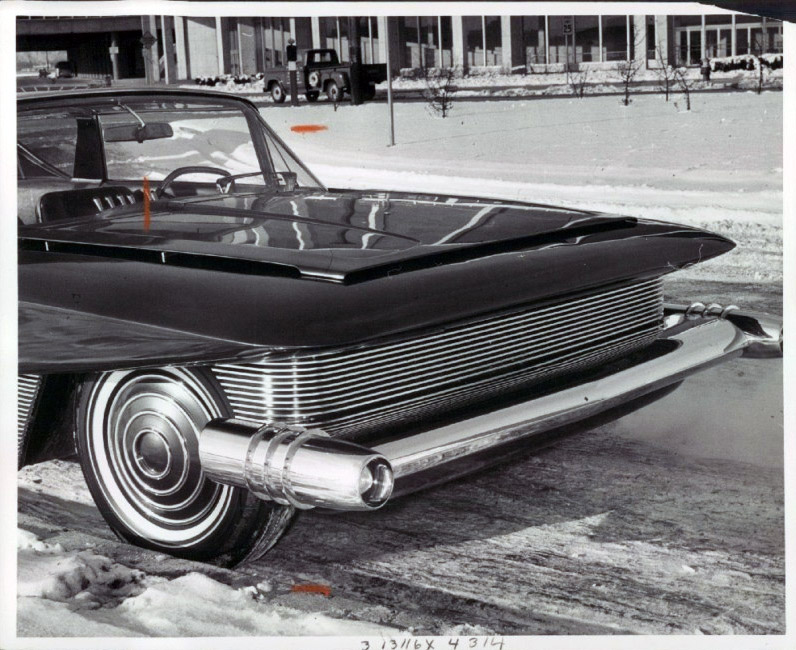 After the DiDia dream car was built, Lew Wolff and a friend modified the car with a more modern two leaf rear suspension, replacing the almost undriveable early Ford torque tube traverse spring set Clarkaiser used. They had to build a tunnel for the driveshaft.[1] 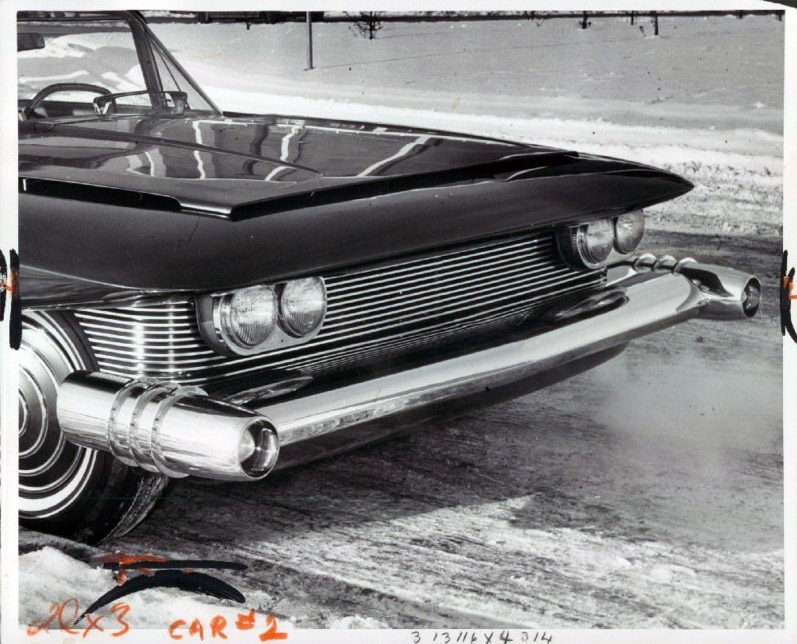 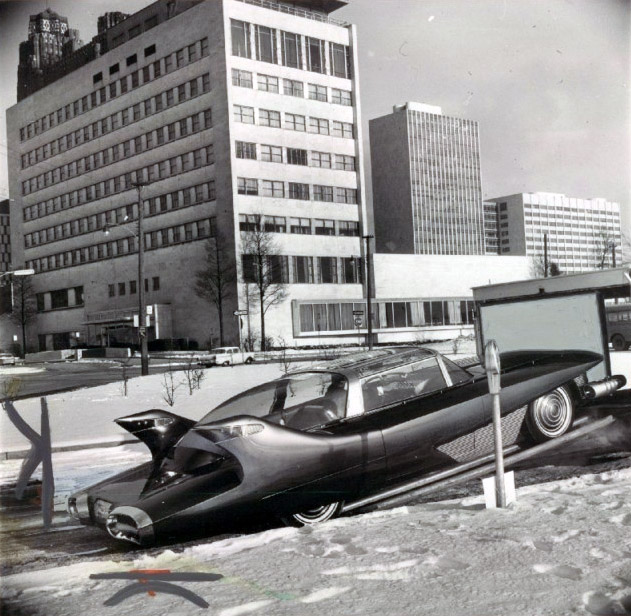 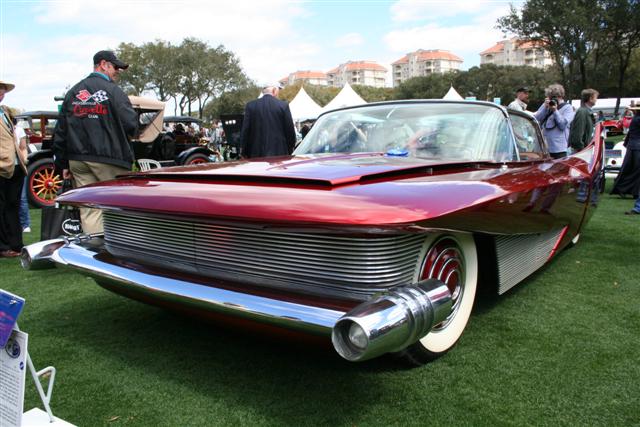 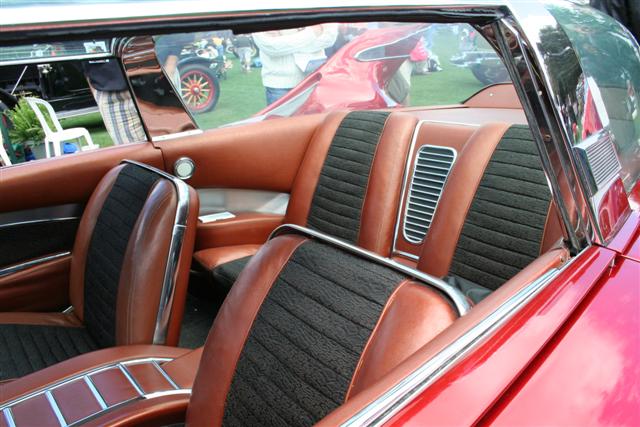 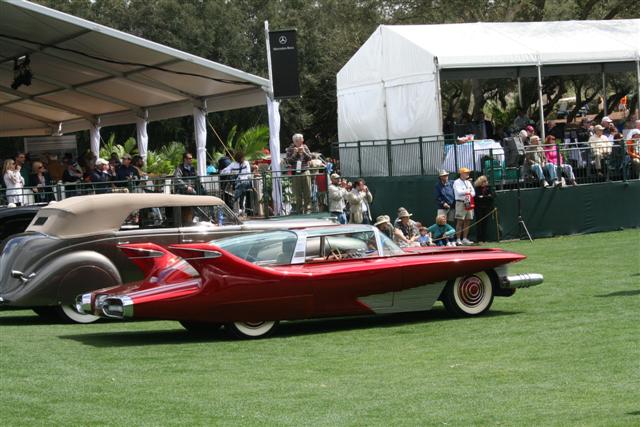 The 1960 DiDia 150 was a luxury, custom-designed iconic, handmade car also known as the "Dream Car" forever associated with its second owner, singer Bobby Darin. Built in Detroit, Michigan, clothing designer Andrew 'Andy' Di Dia designed[1] this "unrestrained and unconventional" automobile.[2] Only one example was ever built. 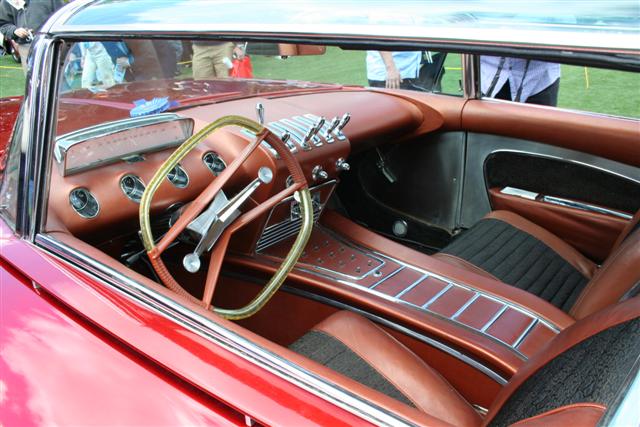 The car is powered by a 427 high-performance Ford engine with a 125-inch wheelbase, with a tubular aluminum frame and a hand-fashioned soft aluminum body.[3] The car has Batmanesque set of rear fins[2] dominating the bodyline and ruby red hubcaps on whitewall tires. Writer Daniel Vaughan describes it as 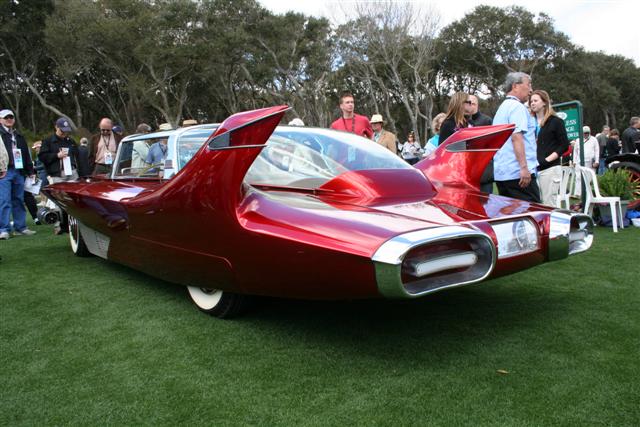 ...an exotic vehicle that is overdone in every detail and in every respect, an iconic dream car. Its metallic red paint was from 30 coats of paint with real ground diamonds for sparkle.[4][5] ...The body is from hand-fashioned soft aluminum. There are hidden headlights and tail lights that swivel as the car turns. Inside, the seats each have their own ash tray, cigarette lighter, and radio speaker. On the dash are oversized levers that control the air conditioning, heater and defroster.[6] 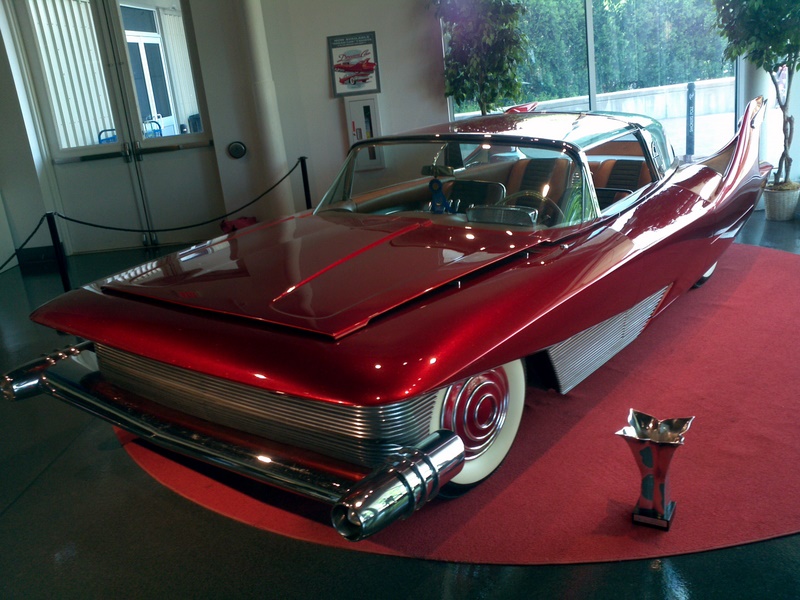 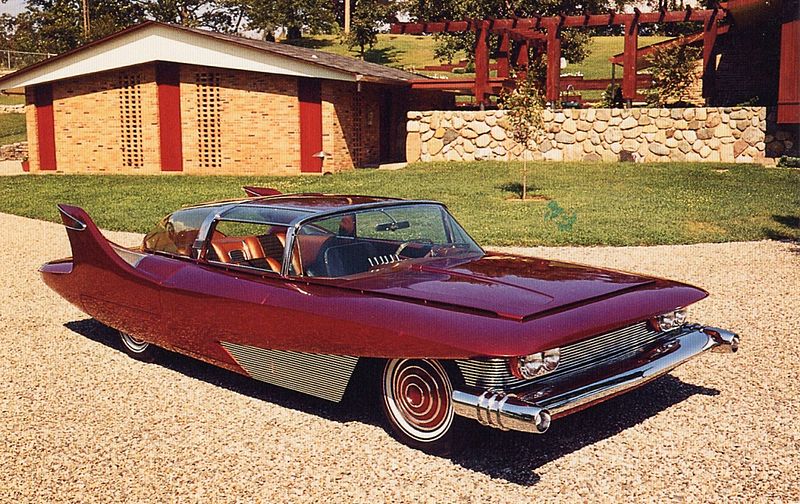 When Bobby drove the car to the Academy Awards, I and Steve Blauner followed behind him in a limousene. The car had two fans and a switch that you had to turn on. Bobby didn't realize, so it heated up. All the magazines said the car caught fire but it didn't.
—Andrew Di Dia[12]

Di Dia toured the car around the country, when Darin wasn't using it for public appearances.[13] After publicity and film use, Darin donated his "Dream Car" to the St Louis Museum of Transportation in 1970 where it remains.[14] It was restored by Mike Manns of Manns Auto Body in Festus, Missouri before going on display 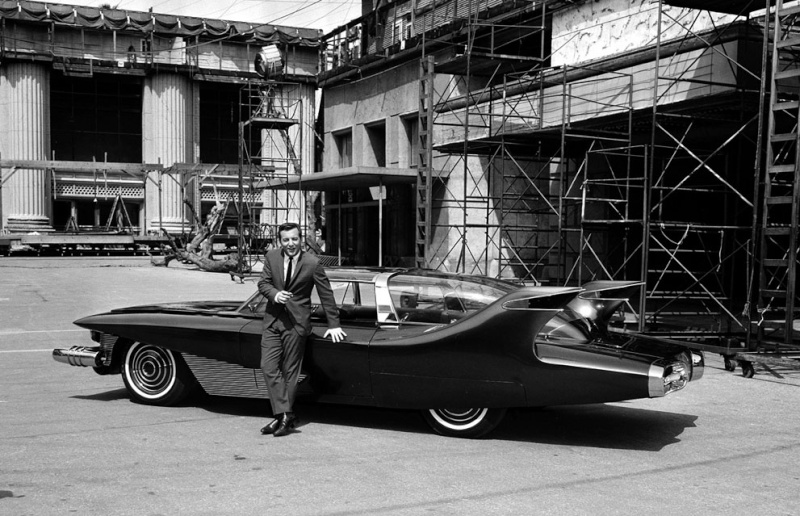 The normal V8 engine is located at the front, being a petrol V engine with eight cylinders driving a central crankshaft and an engine displacement of 365/427.[6] It has a rear-wheel drive, the body and chassis[6] is hand-formed from 064 aluminum with a unitized alloy tube frame.[3][10]

It has a glass cockpit in back, a squared steering wheel resembling a superellipse (with n = 3⁄2, a = b = 1) and thermostatically controlled air conditioning system.[2] The interior is rust coloured in contrast to the ruby paintwork. The design included the first backseat-mounted radio speakers and hidden windshield wipers,[3][14] that started themselves when it rained.[1] Other features include retractable headlamps, rear indicators that swivel as the car turns, 'floating' bumpers and a trunk that was hinged from the driver's side.[3] Each of the four bucket seats have their own thermostatically controlled air conditioning, individual cigarette lighters and ashtrays, as well as a radio speaker.[1] The original engine, a Cadillac V8, was later replaced by a 427 high-performance by Ford when it was taken on the show circuit.[
_________________
We don't care the People Says , Rock 'n' roll is here to stay - Danny & the Juniors - 1958

by That Car Guy

STL 01 16 09 005 I was startled when I saw this thing. It took me back to "The Simpsons", where Homer designed a car called... The Homer. Stuck somewhere between a 1950s show car and TV's Batmobile, here sat something that Elvis and Liberace would have probably ran away from. Brash metallic red paint (Originally 30 coats with real ground diamonds for sparkle), tail fins befitting a 747, and a glass cockpit that no air conditioning system could ever cool, the boldness of the design is, well... totally unique. 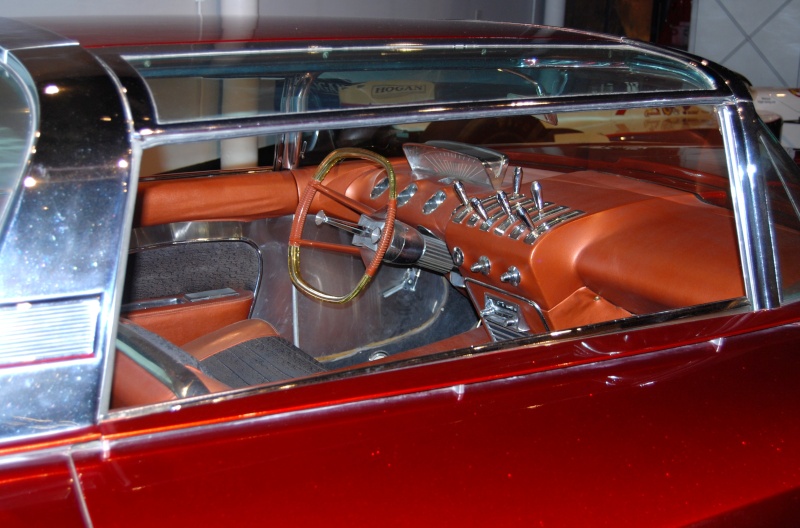 We were recently at The Museum of Transportation in St. Louis, Missouri, on a very cold day. Having no idea what was in the Earl C. Lindberg Automobile Center (No relation to Charles A. Lindbergh of the Spirit of St. Louis fame), we were greeted by a very nice couple that owned and were keeping watch over the place. They had every answer ready, and were rightfully proud of their compact but fascinating automotive collection. 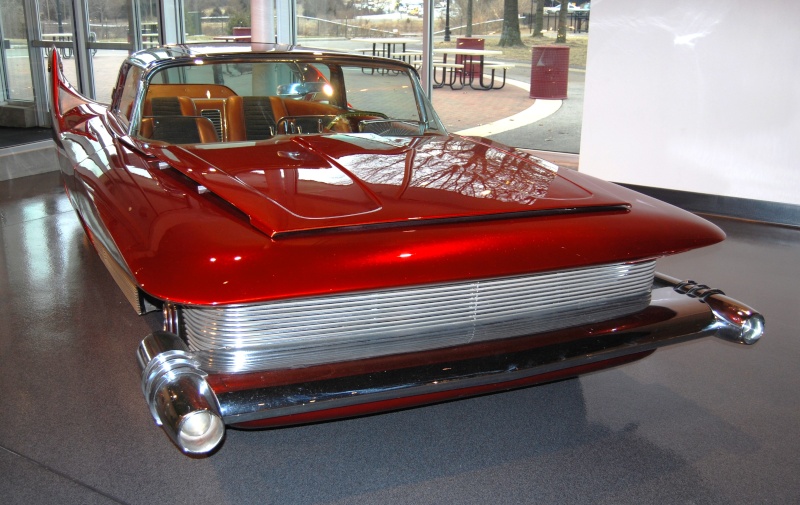 STL 01 16 09 010 Built by Detroit native and clothing designer Andy DiDia, it took seven years, from 1953 to 1960, to finish the car. Two engines are listed as powerplants; I assume the present 427 came later. Originally the car cost $153,647.29 to create; a price of $1,500,000 is estimated for today. It rides on a 125-inch wheelbase, about the length of two Smart Cars' wheelbases. The car was so long, I had to tilt it in the crop box to try to get it to properly fit the page. Maybe the tilt gives the car somewhat of a "Batman"-esque feel, relative to the time period that Bobby Darin drove the car to the Academy Awards; the car was also used in several movies.

STL 01 16 09 001 The DiDia 150 is hand-fashioned from soft aluminum, has thermostatically-controlled air conditioning, hidden headlights, tail lights that swivel as the car turns a corner, glass windows on hinges, and rust-colored seats, each with an ash tray, cigarette lighter, and radio speaker. No word on cup holders.

Best I can tell, the oversize levers on the dash control the heater, defrost, and air conditioning systems. It's also nice to see the flat-bottomed steering wheel, many years ahead of the time when VW GTIs and others made them almost commonplace.

Bobby Darin Bobby Darin (Walden Robert [Bobby] Cassotto) was born in The Bronx on May 14, 1936, and at 8, he heard a doctor tell his mother that he may not live past 16 due to heart damage caused by rheumatic fever. He went on to record such hits as "Splish Splash", "Dream Lover", and "Mack The Knife", which won him the 1960 Grammy. He was nominated for an Academy Award in 1963 for his portrayal of a shell-shocked soldier in "Captain Newman, M.D.". His record company, TM Music/Trio, launched Wayne Newton and others, and Bobby was with Robert Kennedy in 1968 when he was killed at the Ambassador Hotel in Los Angeles. Bobby went into seclusion for about a year after that event. In 1972, he had a TV variety show called "The Bobby Darin Amusement Company" that he hosted until his sudden death. He was not buried; he gave his body to UCLA for medical research.

STL 01 16 09 002 In 1970, Mr. Darin donated the DiDia 150 to the Museum of Transportation. There is a special glass case beside the car with his photo, autograph, and other memorabilia.The car was restored by Manns Auto Body in Festus, Missouri, just previous to display. The only other car in the Museum that literally made me gasp was their working Chrysler Turbine Car, the only running Turbine Car on public display. Jay Leno has offered to buy the Chrysler, but has not been successful yet. The owners start it every two weeks, but my hints at hearing the car run were moot. Mr. Darin passed in 1973, after surgery to correct heart problems brought on by blood poisoning. He was 37.

The late singer Bobby Darin's "Dream Car" is back on display in dazzling shape. 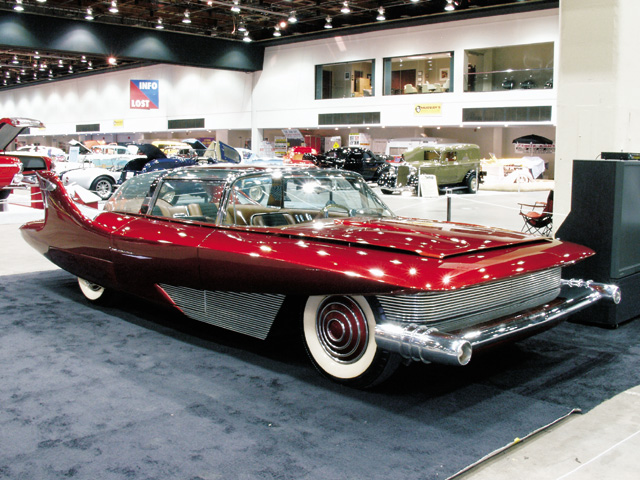 Mike Manns, owner of Manns Auto Body in Festus MO, restored the car for the second time since Darin donated it to the National Museum of Transport here in St. Louis in 1970. 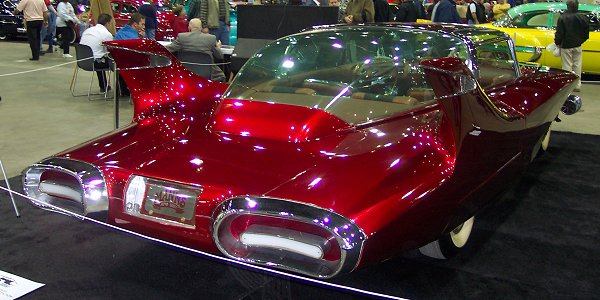 "About 100,000 people have viewed the car since it was restored 13 years ago," Manns said. "It was handmade in the 50's from aluminum that is very soft.
People don't realize they're denting it when they lean against it."

The car, designed by Andy DiDia in 1953 was "one of the most fabulous custom cars ever built with every futuristic innovation money could buy," Manns said.


It cost Darin more than $93,000 and took seven years to build.
Darin drove the car to special events, including the Academy Awards presentation.

The car, which looks like a square version of the Batmobile, was the creation of a clothing designer, not a car manufacturer.
The story goes that Darin struck up a friendship with DiDia, a well known clothing designer from Detroit.
DiDia, an auto buff, designed the car on a whim and showed it to Darin. Darin loved the lines and made a few suggestions.

They dubbed the "DiDia 150" the "Bobby Darin Dream Car."
Originally, the car had 30 coats of paint, mixed with a diamond dust from Sweden.

This time, Manns used a glittery gold undercoat with pearly red on top. 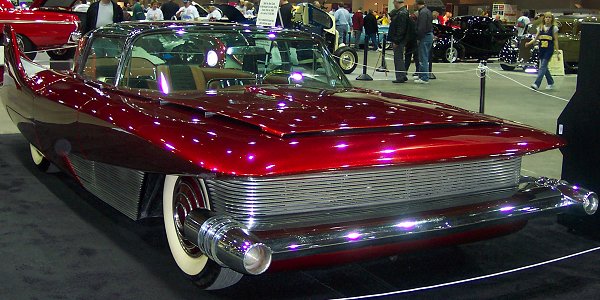 The "Dream Car" featured a list of innovations, including thermostatically controlled air-condtioning that keeps the temperature constant,
hidden headlights, taillights that swivel when the car turns a corner, glass windows on hinges and rust leather bucket seats,
each with its own ash tray, cigarette lighter and radio speaker.

The car will remain on display at the Transport Museum.

A clothing designer's creation became Bobby Darin's dream car. While Detroit native Andy Di Dia's Clothing designs were elegant and traditional, his single automobile design was unrestrained and unconventional. Construction of the hand-built Di Dia 150 lasted from 1953 to 1960 and cost over $150,000 to build. Today, it would approach $1.5 million. It has a V8 engine with a 125-inch wheelbase. 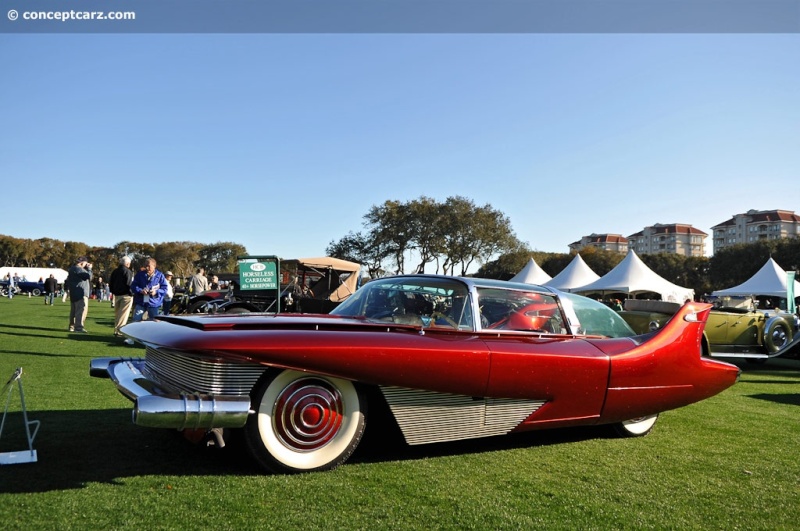 Di Dia friend, singer and actor Bobby Darin, was enchanted by the car and obtained it from Di Dia. Bobby drove it to the Academy Awards and in movies. It was donated in 1970, three years after his death. 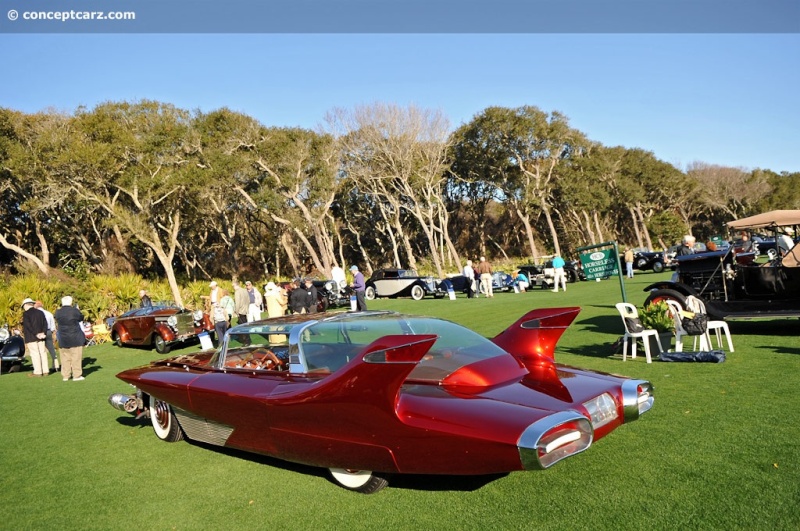 The DiDia 150 is an exotic vehicle that is over-done in every detail and in every respect, an iconic dream car. Its metallic red paint was from 30 coats of paint with real ground diamonds for sparkle. In the back are large tail fins that would be better suited on the underside of a boat or on the wings of an airplane. The body is from hand-fashioned soft aluminum. There are hidden headlights and tail lights that swivel as the car turns. Inside, the seats each have their own ash tray, cigarette lighter, and radio speaker. On the dash are oversized levers that control the air conditioning, heater and defroster. The car rests on a 125-inch wheelbase and is powered by a V8 engine. This is a car that batman would buy. 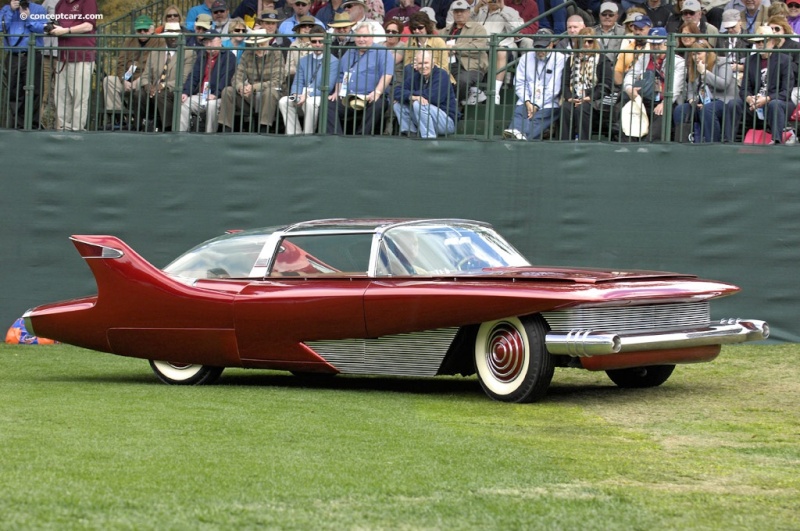 The car was created by Andy DiDia and only one example was ever built. It was later sold to the singer and actor Bobby Darin. It currently resides in the Museum of Transportation in St. Louis, MO. 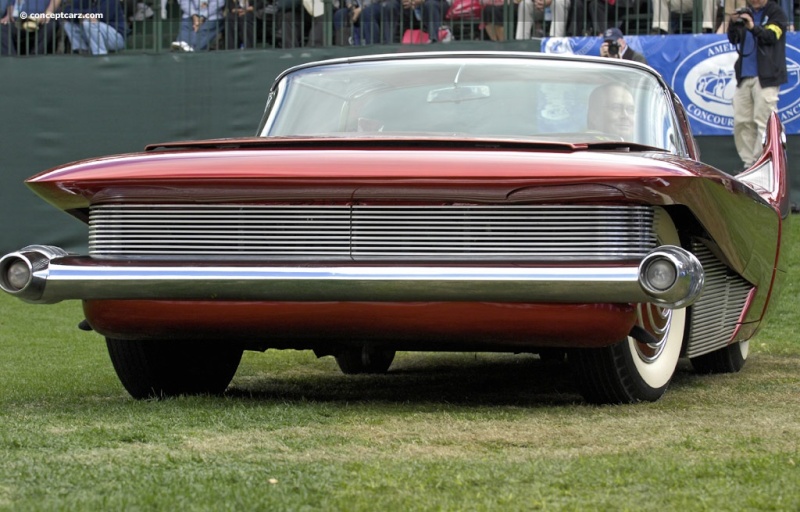 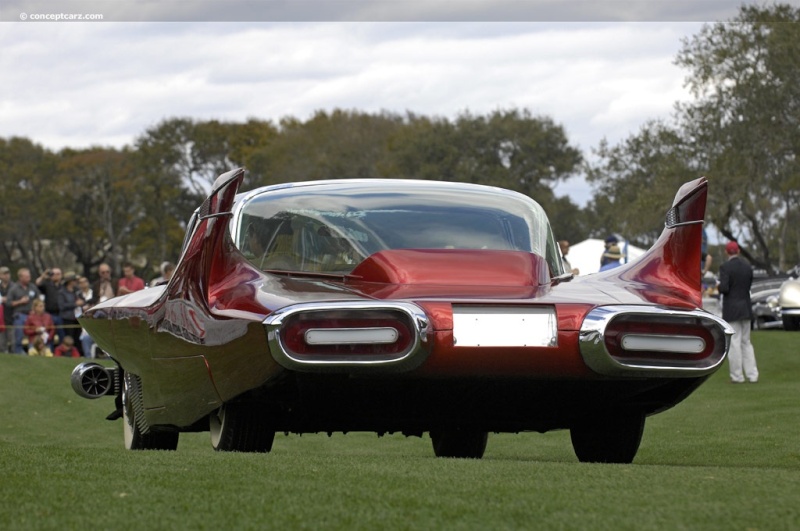 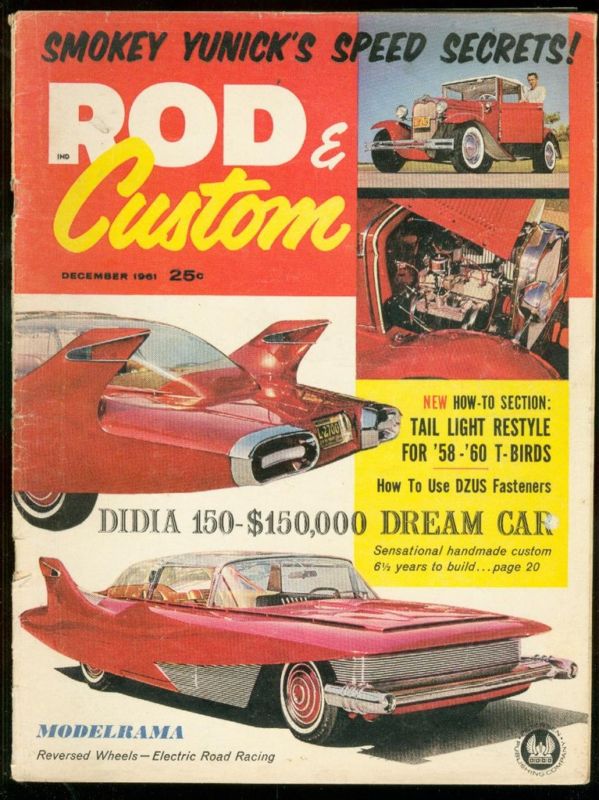