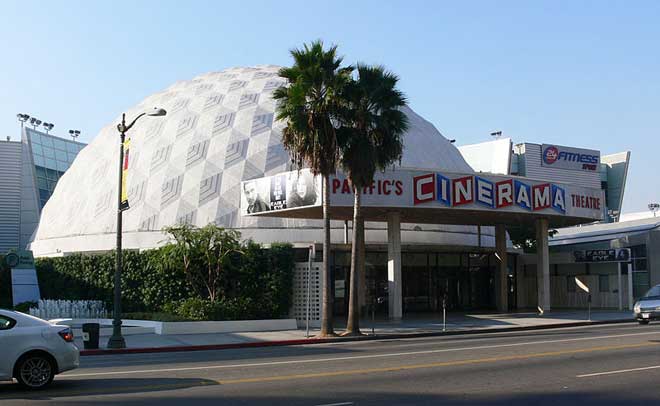 In February 1963, Cinerama Inc. unveiled a radically new design for theaters which would show its movies. They would be based on the geodesic dome developed by R. Buckminster Fuller, would cost half as much as conventional theaters of comparable size, and could be built in half the time. Cinerama's goal was to see at least 600 built worldwide within two years. The following April, Pacific Theatres Inc. announced plans to build the first theater based upon the design, and had begun razing existing buildings at the construction site. Located on Sunset near Vine Street, it would be the first new major motion picture theater in Hollywood in 33 years, and would be completed in time for the scheduled November 2 press premiere of It's a Mad, Mad, Mad, Mad World. The design was adapted by the noted architectural firm of Welton Becket and Associates.

Total construction time is reported to have been 16 weeks. The domed roof comprises 316 precast concrete panels (most hexagonal) in 16 patterns, each weighing some 3,200 pounds (1,500 kg). The first pentagonal panel was placed on August 29, with the rest to be installed over 4 weeks. 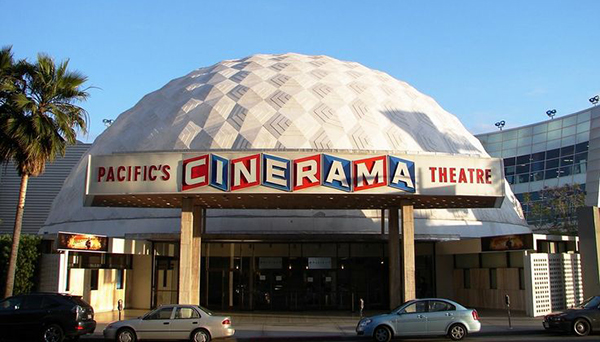 With its 86 feet (26 m) wide screen, advanced acoustics and 70mm film capability, the Cinerama Dome remained a favorite for film premieres and "event" showings. But by the late 1990s the motion picture exhibition business began to favor multiplex cinemas, and Pacific Theatres proposed a plan to remodel the Dome as a part of a shopping mall/cinema complex. Historical preservationists were outraged, not wishing to see another great theater turned into a multiplex or destroyed. At the same time, a small contingent of Cinerama enthusiasts had begun resurrecting the three-projector process. They and the preservationists prevailed on Pacific to rethink its plans for the property. 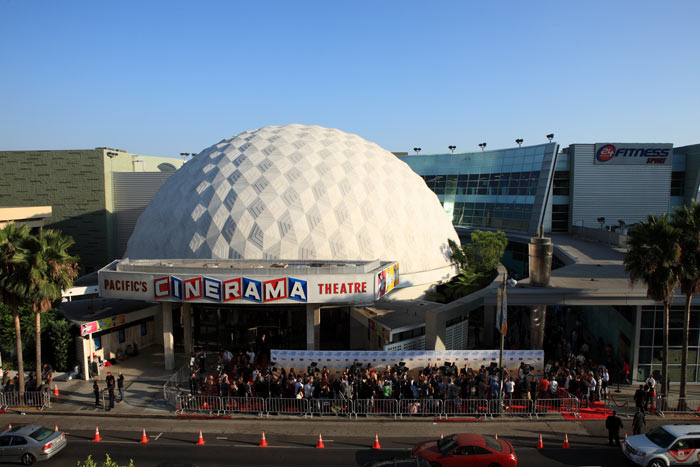 The preservation of the Cinerama Dome came at a time when most other surviving Cinerama theaters were being demolished. An example of this was the case of the Indian Hills Theater in Omaha, Nebraska, a round Cinerama theater boasting a 110-foot screen which was razed in 2001 (to make room for a parking lot) despite the vigorous protests of local enthusiasts and numerous Hollywood legends[who?].

The Cinerama Dome was declared a Los Angeles Historic-Cultural Monument in 1998.[4]