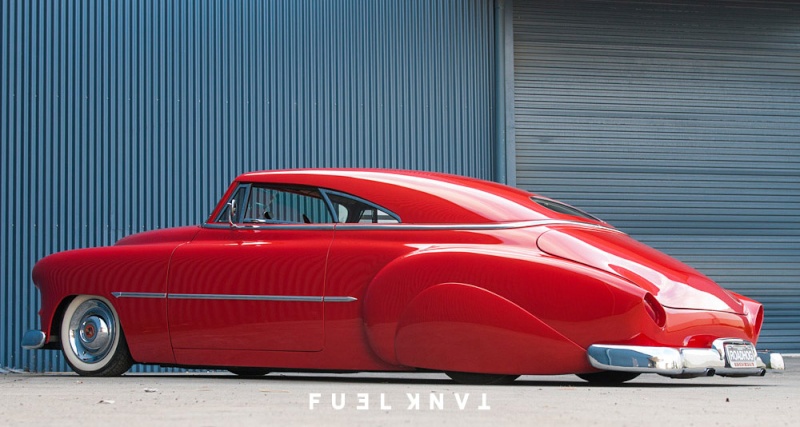 Words Karlee Sangster Photography Luke Ray
The story starts like many you’ve heard before; A car obsessed young man grows up around an influential relative, dreaming of building his own dream machine. Michael Morris was that young man. 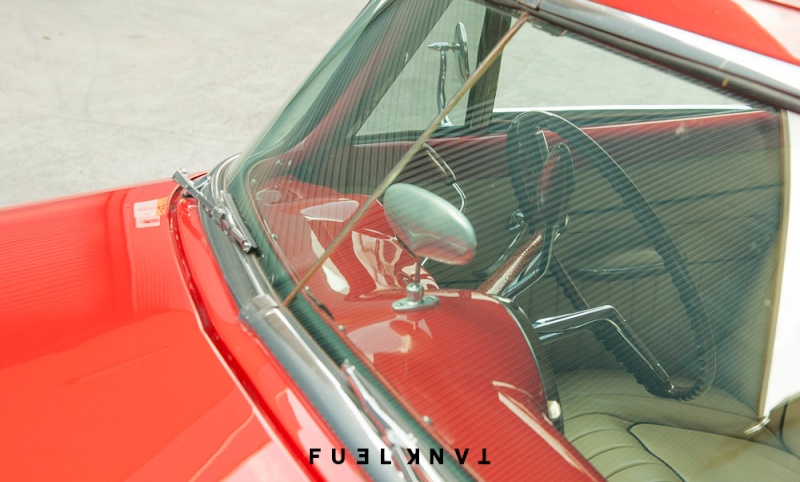 Michael’s uncle, Frank McGinty, started a panel shop in the ‘50s where Michael would spend his school holidays, working away on various projects and pouring over custom magazines. Back at school, he’d draw cars all day, and when Uncle Frank painted his custom Holden FX ute metal flake orange, it blew his young nephew’s mind. Michael had seen what was possible and wanted in. 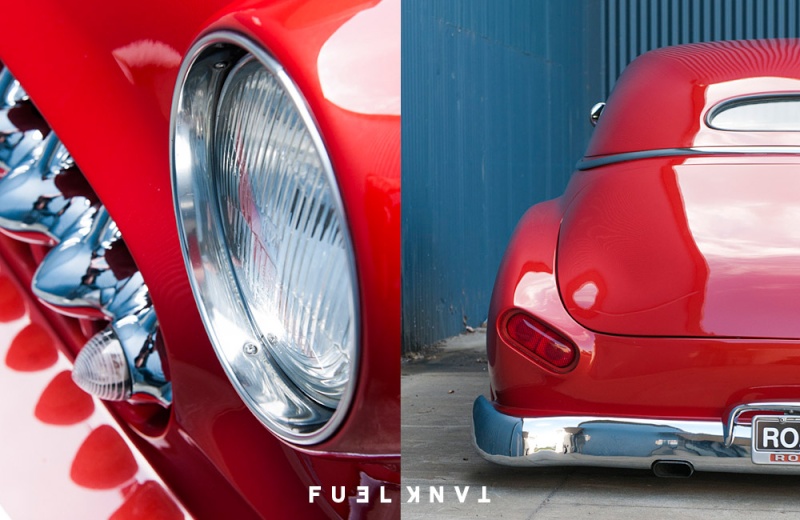 “My first car was a one owner EH Holden, which I pulled apart and talked Uncle Frank into painting dark metallic green. Then I added seven inch Torana chrome wheels and velour trim,” he remembers. “I then bought a chopped and channeled ‘32 pickup at 19 and drove it for a year or two, sold it and started building another fully fendered ‘32 pickup, which I sold to fund a US trip in ’88. After that, I started building a glass three window ‘32 coupe and finished it in 1991.”

So he’s no stranger to cars then, but this one takes the cake. Michael remembers how it all began: “I bought a 1949 Chev rolling shell in 1999. It had had lower door repairs, the sills had been replaced and lower rear guards repaired and the roof had been removed.” This was to be his most involved build yet. “As a fan of the early Barris style of customs, which were stylish and uncluttered, I drew up some images of what I wanted and kept as close to the plan as I could,” he says. “The first thing was to remove it from the original chassis and fit a HQ Holden chassis, which ended up being more work than I first thought, as I had to cut out half of the mint floor and fabricate a new one. II then fitted a large cross member to the frame, along with air bags and new shock and body mounts.
_________________
We don't care the People Says , Rock 'n' roll is here to stay - Danny & the Juniors - 1958 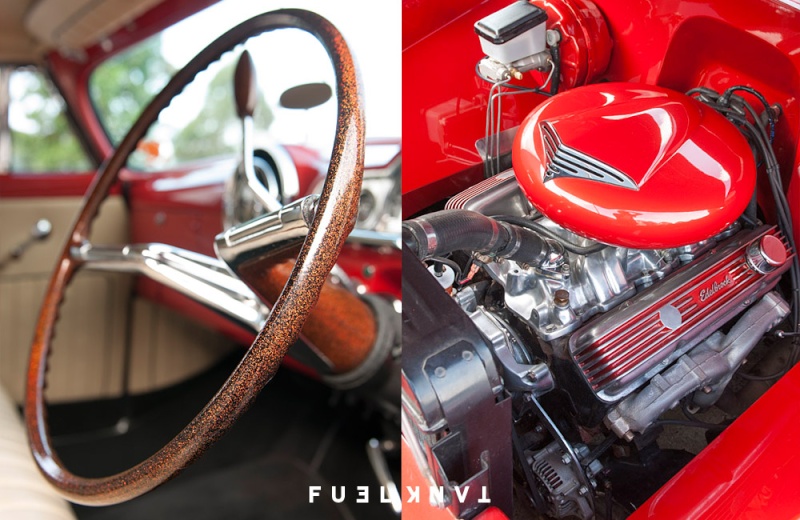 “Trying to keep the car true to the era, I fitted a 283 Chev (built by Manuel Camborakis) with a mild cam steel and steel crank with six polished 94 Holleys (with frog mouth air cleaners) mounted to a Weiand dragstar manifold and early Edelbrock valve covers.” Sounds like a mouthful? Michael was nowhere near finished. He continues: “It’s backed up by a turbo 350 and commodore rear end and it’s got a Leyland bus radiator!” 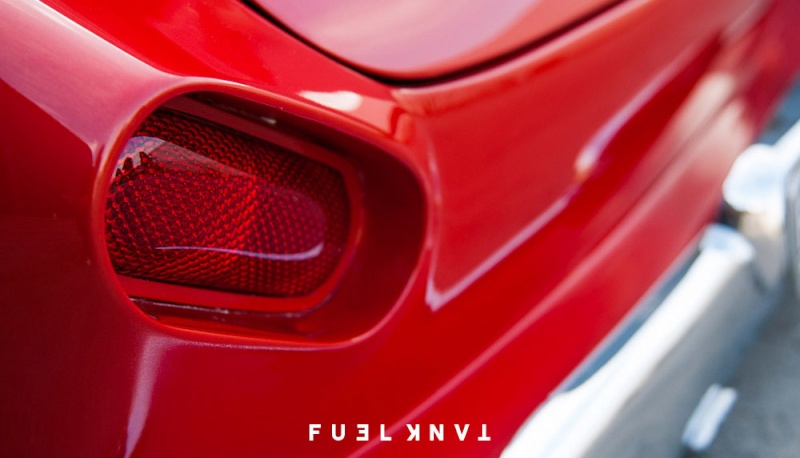 In true ‘Kustom’ style, Michael spent some serious time on the bodywork, doing the vast majority of the work himself. The bonnet was lengthened and made into one piece with radiused corners, a ‘53 Chev grille surround with a lengthened centre bar was welded in and with the help of friend Jason Hall, Michael made up the grille teeth out of fiberglass, adding ‘58 Chev blinker lenses on the end teeth. “I then fitted 1950 Pontiac bars, which I shortened 100mm and welded bolts to rear, made front and rear stone trays to meet the new bars and lengthened the front guards and fitted them with ‘54 Ford headlight bezels,” he recalls. 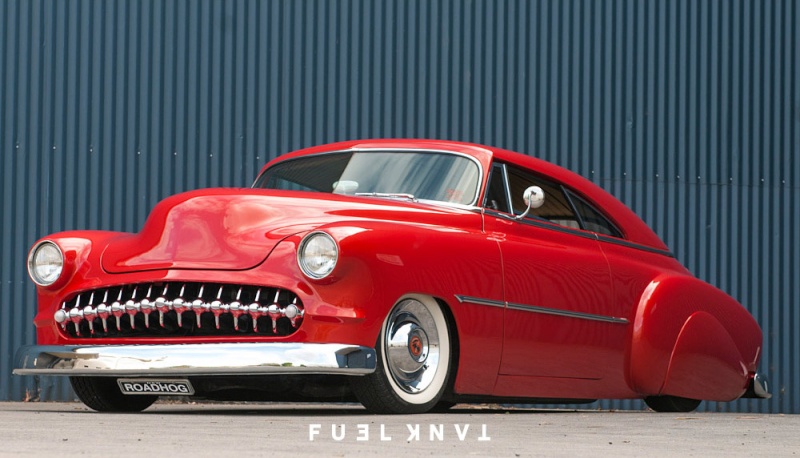 After all that, you’d think the car was nearly done. But Michael had only just started. The real challenge was still to come. “The roof and boot were the major work! After modifying the top of the windscreen area and making a wooden piece shaped to the windscreen, I then used thin steel tubing to get the shape of the roof and covered it in masking tape and fiberglass then covered it in body filler. With the help of the late Jock Wilson we spent months sanding it to the desired shape,” he says. “I also did this with the boot, to get the roof and boot to flow as one. We used 48 four kilo tins of body filler to make the plug for the mould.
_________________
We don't care the People Says , Rock 'n' roll is here to stay - Danny & the Juniors - 1958 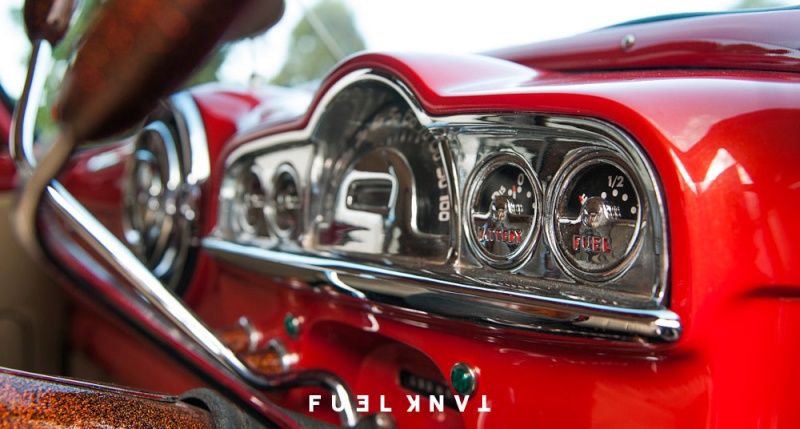 We spent months on it and burnt out a sander in the process. When we had to remove it from the car, it took three guys to lift it, all straining with the weight - it was four inches thick in places! I tried ‘styrene and foam but it was too soft. The sander kept going through it so I stuck to body filler.” Insane. Michael continues: “After this was done, we then made the final pieces and made all the mounts. The window surrounds for the side glass we made out of brass with the help of Al Fountain and then had them chromed.” 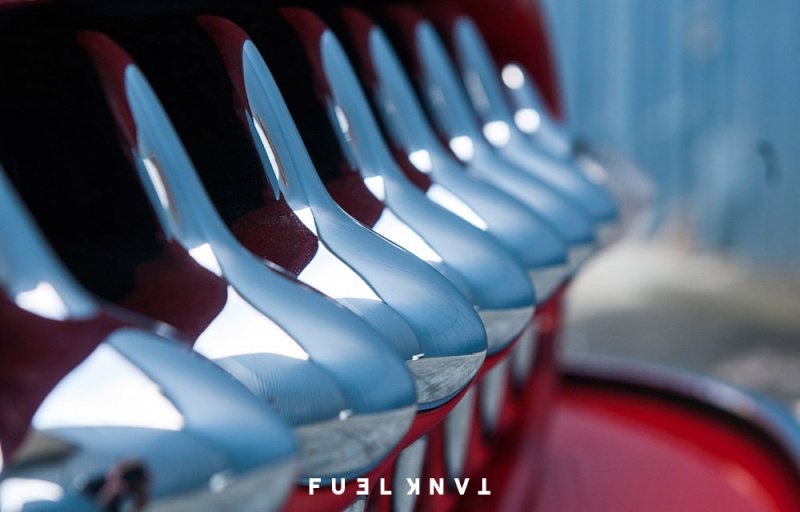 The amount of work in the car is incredible, and Michael and his mates have really covered all the bases. The custom tradition of piecing parts together to create a beautiful Frankenstein’s monster has certainly been honoured. The rear spats are from a ‘36 Ford, but they have been lengthened and the rear tail lights are custom made. The dash is from a ‘50 Pontiac and modified to fit with a 1959 Oldsmobile steering wheel and custom made dash knobs by Craig Fountain. The hubcaps were stolen from a 1950 Cadillac, the side trims are modified XP Falcon cast offs and the windscreen is from a Ford f100, cut down of course. 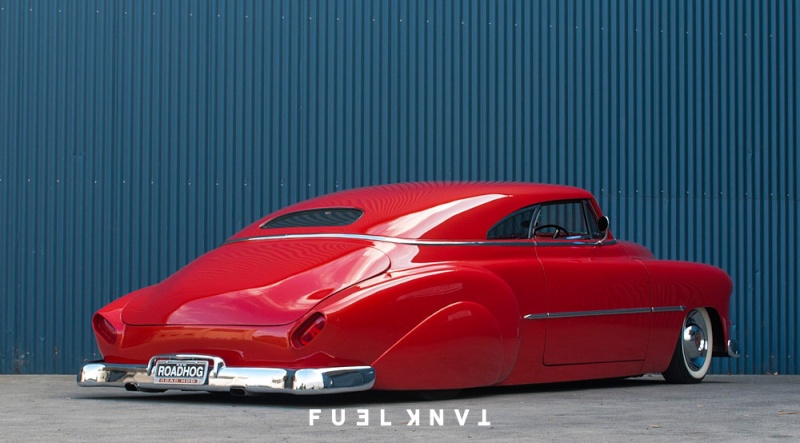 Michael, who is a sign writer by trade, drew up the design for the interior and made a new back seat. John Viles is responsible for the tuck and roll trim job and one of Michael’s best mates, the late Jock Wilson spent months getting the body ready for paint. The colour? Orgasmic Orange, an eye catching hue that looks different in every light.
The car debuted at the 2005 Phillip Island Kustom Nationals, picking up the ‘King of the Kustoms’ trophy. The awards kept coming, and in the same year, the Chev won top custom at John’s Picnic in Victoria. Though not a daily driver, the Chev has clocked up around 25000 km, with many trips to Melbourne and Brisbane, from Michael’s native NSW.
_________________
We don't care the People Says , Rock 'n' roll is here to stay - Danny & the Juniors - 1958

Despite winning numerous awards, the car is by no means a bubble wrapped artifact, and Michael honours the custom tradition of actually driving and working on the car as issues arise. “I run the Donut Derelicts Australia breakfast each month so the car gets driven quite regularly,” he says. “After driving the car for a few years running the six carbies I blanked off four to run on two. With reliability issues, warping carb bases and vacuum leaks, I ended up biting the bullet and fitting a 600 Holley carby with my friend Mad Murray Nicholson making me up a neat custom air cleaner that suited the style of the car.” 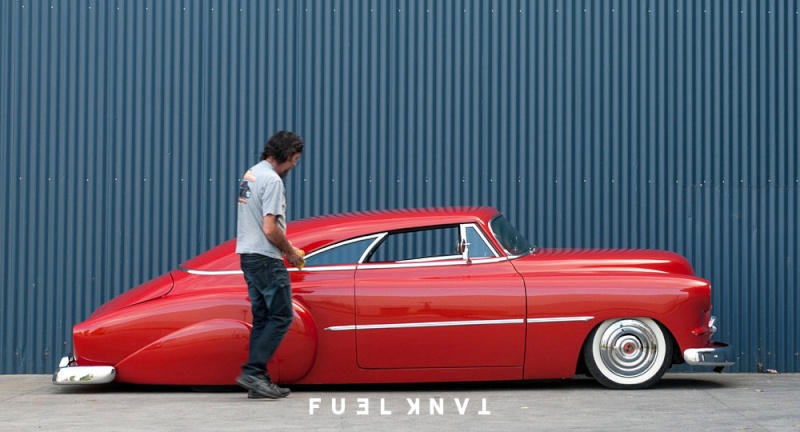 So that’s the story. Michael has the last word: “The car was built in a filthy old farm shed a single car width wide with less than two feet either side. With the wind howling through the open shed and having to fight off rats and possums, it definitely wasn’t a walk in the park, but the end result was finally worth it.” Right on.
This article first appeared in Fuel Magazine issue 15.