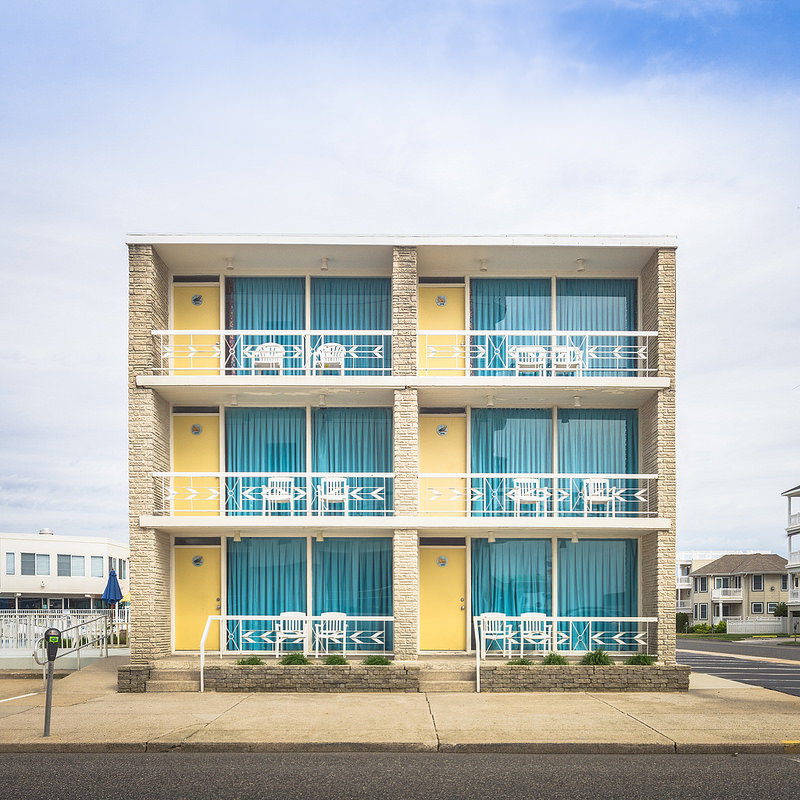 Wildwood, on Cape May in New Jersey, is the undisputed capital of Googie modernist architecture on the East Coast. In fact, there's probably a higher concentration of architecture of this type here than anywhere else in the world. But it's also disappearing at an alarming rate. 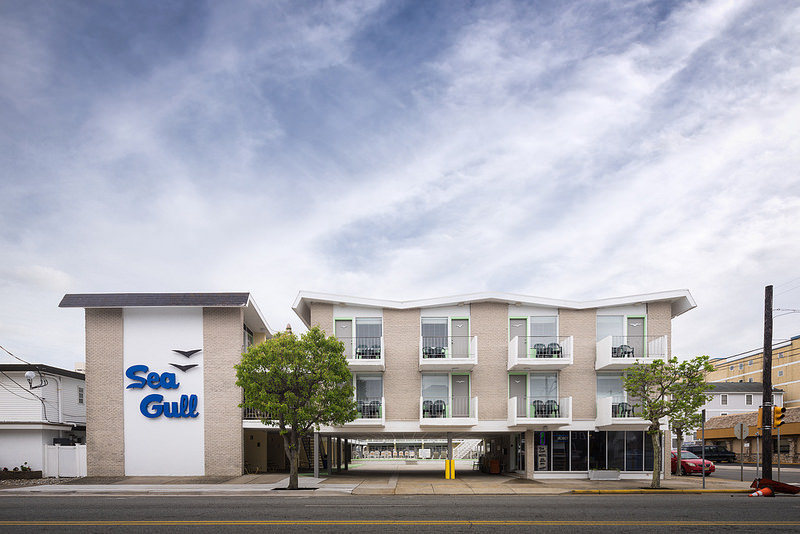 The Wildwoods, as the combined communities are known (it's frankly impossible to tell where one city starts and the other ends), has always been a vacation resort. It got its start at the end of the 19th century, and gained a lot of momentum in the early 50s through the 1960s. 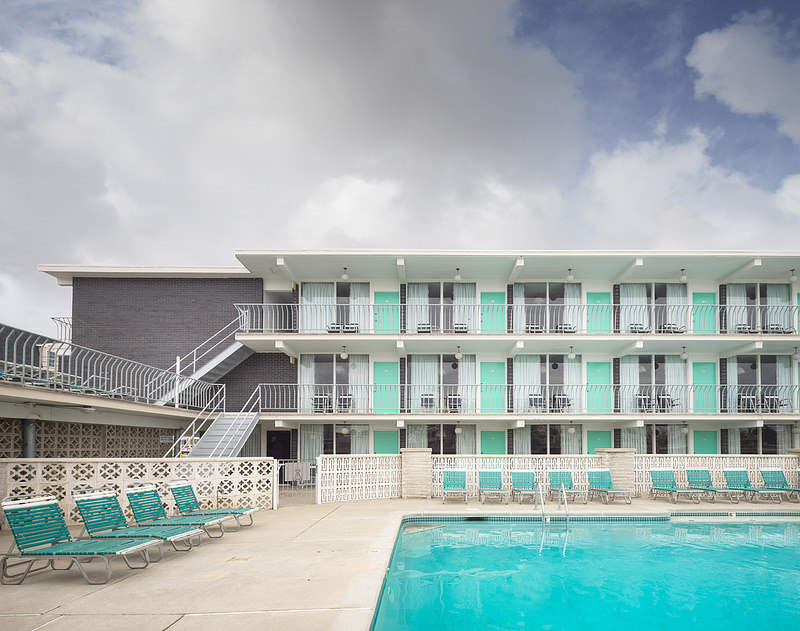 While I don't know the architects for most of these, quite a few were designed and built by the Morey family. The Moreys have been a prominent family in Wildwood since at least the 50s. They were inspired to create googie modern motels in Wildwood while visiting Miami Beach and seeing hotels like the Fontainebleau, and other designs by Morris Lapidus. Many of the hotels are still owned by the Morey family, who also run local attractions like Morey's Piers and water parks. 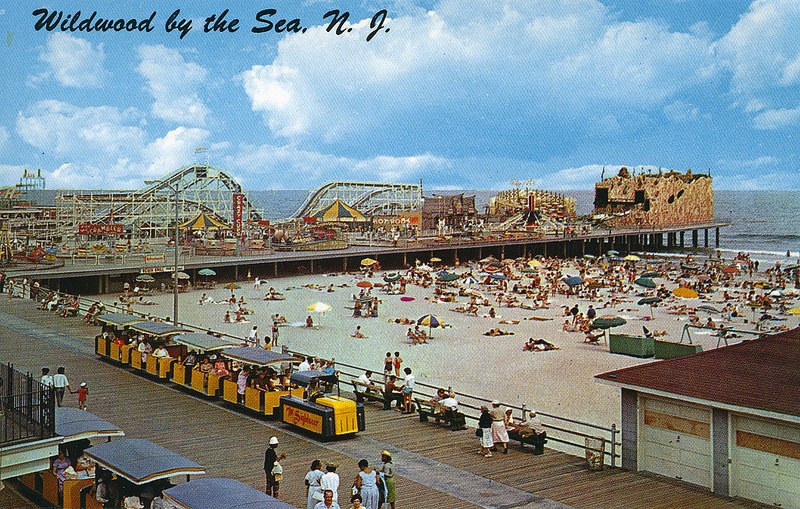 The boardwalk and piers, with their souvenir shops, arcade games, ferris wheel, and such continue to offer the classic vintage Jersey Shore experience. Back in the day, there was even a sky ride and a monorail! 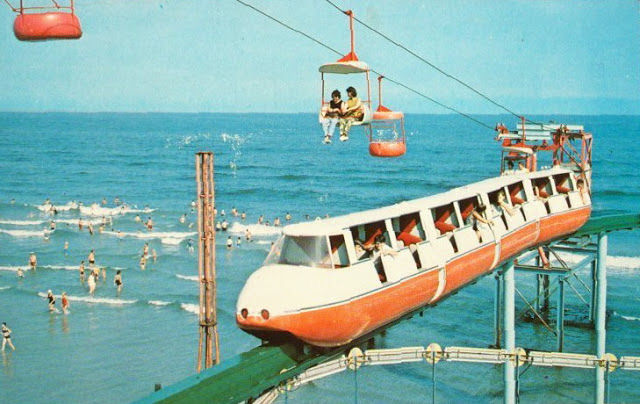 The buildings are mostly modest, low-slung "motor inns" or "motels". They were clearly built to cater to America's burgeoning middle class at the time. A pool, a mini-golf, and a sun deck are the standard amenities. 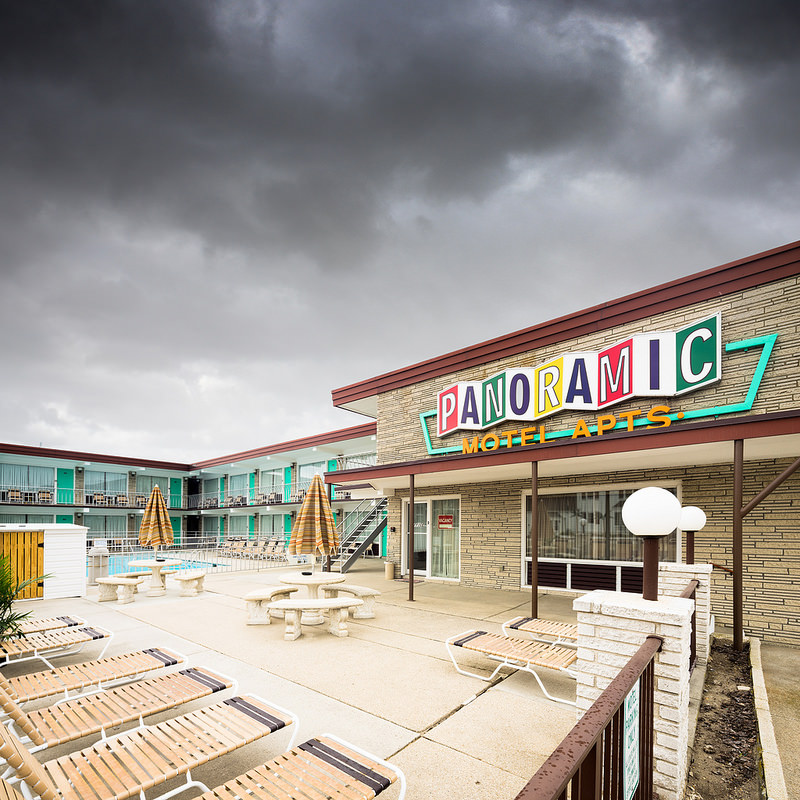 Many haven't really been touched since they were built in the 1950s and 60s. That, alone, makes them extraordinary. But what makes them even more special is their unique architecture and signage.

Many vacation resort destinations of the period (Palm Springs, CA, Niagara Falls, NY and Ontario, or Lake George, NY) built little motels with themes of the day to appeal to the popular imagination. For example, Hawaiiana / Tiki is a popular one:

Predating Las Vegas by a few decades, at least, there are motels that evoke Camelot...


I really liked the naiveté of the artwork and some of the designs, as well. For example, the mural on the side of the Waikiki Hotel was meant to depict that famous view of the beach and Diamond Head beyond. But the end result is something a bit... uh... different.

And the Jolly Roger statue on top of this one is just funny... I love it.


One thing they all seem to have in common is a modernist, Googie design aesthetic, regardless of the chosen theme.

Like most resort towns, Wildwood is practically a ghost town in the off season (I visited during a cold-rainy day, as you can tell from my photos). It was completely empty. The population balloons from about 5,000 permanent residents in the winter to over 250,000 during the summer. That's nuts. I've never been there in the summer, but all of the signs regulating traffic, parking and crowds hint at absolute chaos during the peak season.


That said, the locals all seem to take the crowds in stride. Nearly everyone I met in town was extremely friendly and I can't say enough about their hospitality (The one exception to this rule - who was working front desk of a hotel I photographed - will remain nameless but you know who you are!). Despite most places being closed and the owners and employees busy trying to get ready for the coming tourist season, many people who were there were willing to set up chairs, open parasols, move trash cans, and otherwise go out of their way to help out and let me take photos. It's just too bad the sun didn't make an appearance... I shot all of these from under a towel, and was wiping drops off the lens between every frame.

Wildwood's residents don't call the prevailing style of architecture "Googie" or even "Mid-century Modernist". They call it Doo-Wop. I personally HATE that name. It sounds cheesy and reminds me of all of the cliches you find in badly recreated "50s-themed diners" you find in suburban malls. I'd never heard of doo-wop architecture. I read that the term was first coined by the Mid-Atlantic Center for the Arts in the 90s, and is used specifically (exclusively?) for Wildwood.

Still, I can understand why they would invent that name. It's evocative of early Rock n' Roll, and something that most people can easily understand and relate to (probably more than the term "Googie", which is named for the first diner of that style, "Googie's", in Los Angeles by John Lautner). And Wildwood has a deep historical connection to Rock 'n Roll, as its the location where Bill Haley & the Comets performed the first Rock 'n Roll song, Rock Around the Clock, for the very first time back in 1954.


But personally, I think that calling the architecture "Doo-Wop" cheapens it. And a lot of the locals do refer to it as "kitschy", almost apologetically, which is a shame. Be proud, Wildwoodians! Love your heritage! So much of this architecture - often by unknown architects - deserves a lot of credit and respect. In fact, several of the motels here are now listed on the National Register of Historic Places.

Of course, there's a bad news part of this story (and you knew this was coming). Since the early 2000s, Wildwood has undergone a bit of an economic renaissance, of sorts, which has led to a lot of new development. But that development has meant bland, boxy, boring condos. And it has come at the expense of many of the Googie modern hotels in the community, which are being destroyed. It was worse during the boom of 2005-2007 but I don't believe the problem has gone away. And it'll likely happen again at the next boom.

In fact, more than two-thirds of Wildwood's modernist architecture has already been destroyed. I had compiled a list a few years ago of places that I wanted to see if/when I ever had the opportunity to visit. But unfortunately, I was shocked to discover that at least half of the hotels and buildings on my list had already been demolished, in just the few years since I'd started to compile that list in 2003. Here are just a few examples:

I think a lot of the residents mean well, but they simply don't understand how valuable this heritage is. They seem to be trying really hard to strip these places of their unique character.

And there are few laws in Wildwood to regulate this development. Palm Beach, Florida and Palm Springs, California are prime examples of how communities have been able to leverage historic preservation into a major economic engine for their community. They are major tourist destinations because of it. That architectural heritage is the most important asset Wildwood has to differentiate itself. Without it, Wildwood will soon become just a bland seaside community like thousands of others.

There's now a Doo-Wop Preservation League, which was created in the face of all this wanton destruction, in an attempt to increase awareness and appreciation for this architecture. There's now even a museum, which is housed in a saved but relocated former diner, and they have a collection of signs from demolished motels that they'd managed to save. Alas, like everything else, the center was closed when I visited so I didn't get a chance to talk to anyone or see inside the museum.


But despite the demolitions, there are still more existing googie modern motels and other buildings on the island than I could count, and I look forward to visiting again someday soon, hopefully when it's sunny and not raining...


Stokes Architecture also created a great primer on Wildwood architecture and suggested design guidelines (which, unfortunately, have largely been ignored by developers). It's a bit dated because it provides suggestions for some buildings that have since disappeared. But it's still a great reference. You can find it here. 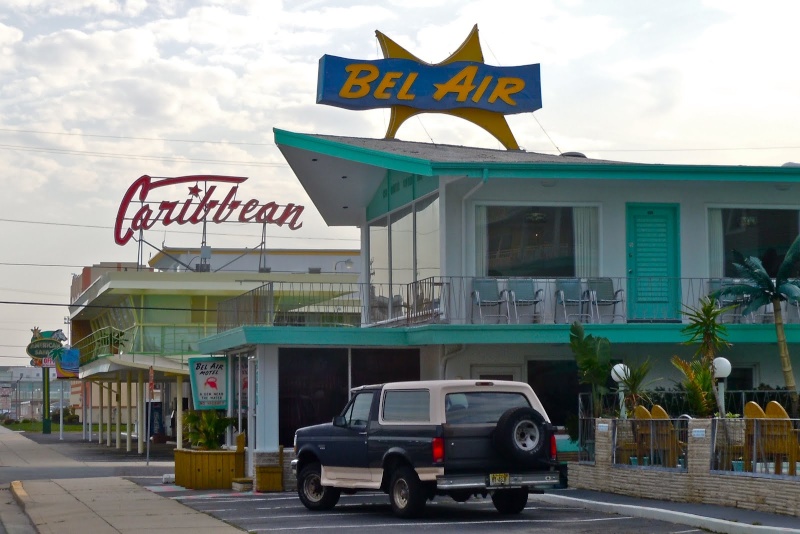 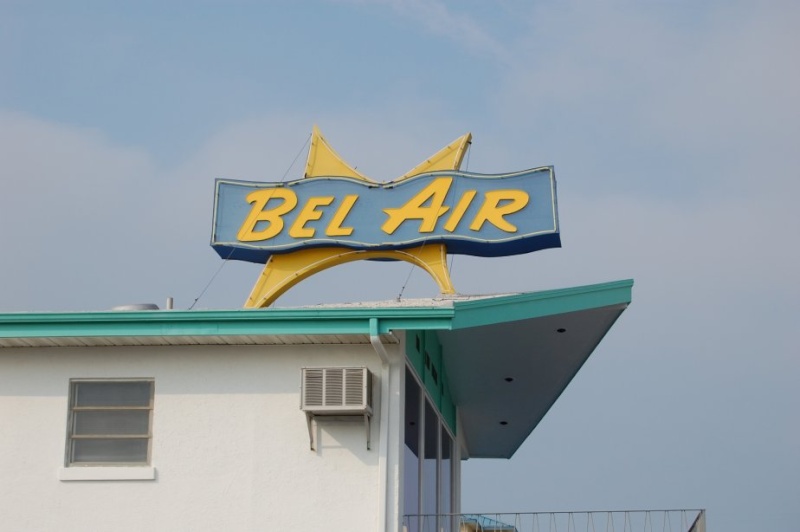 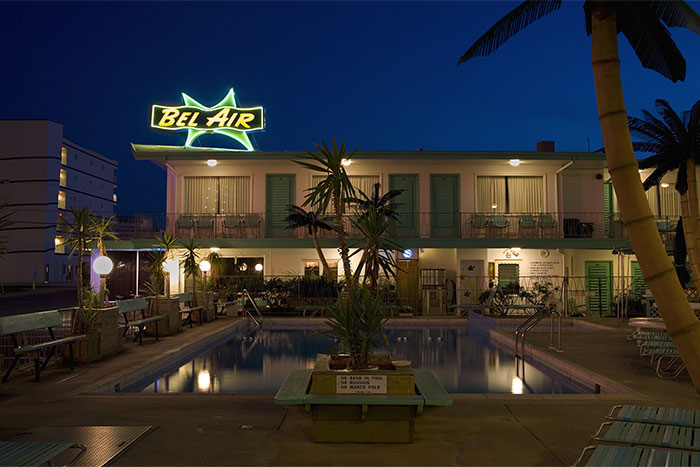 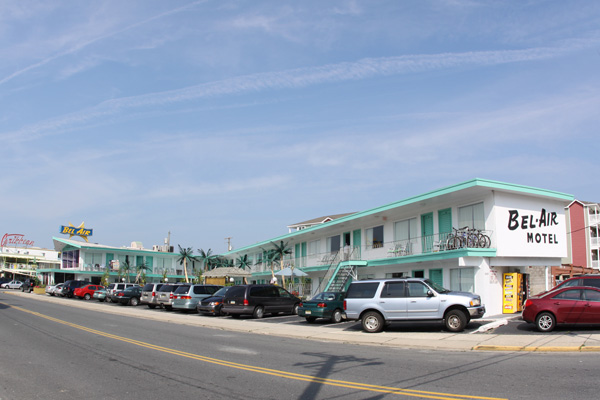 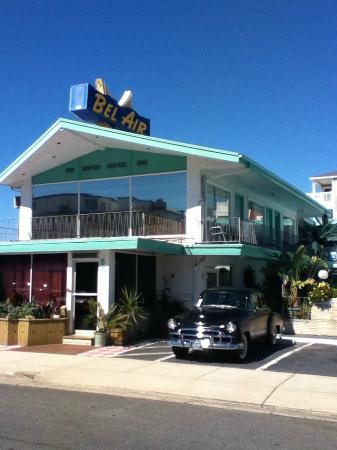 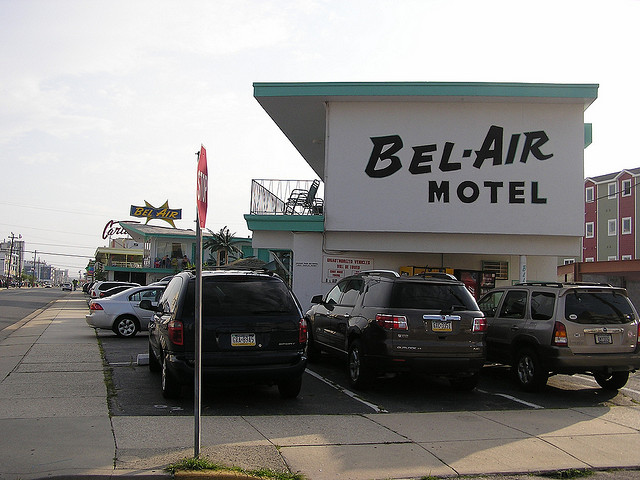 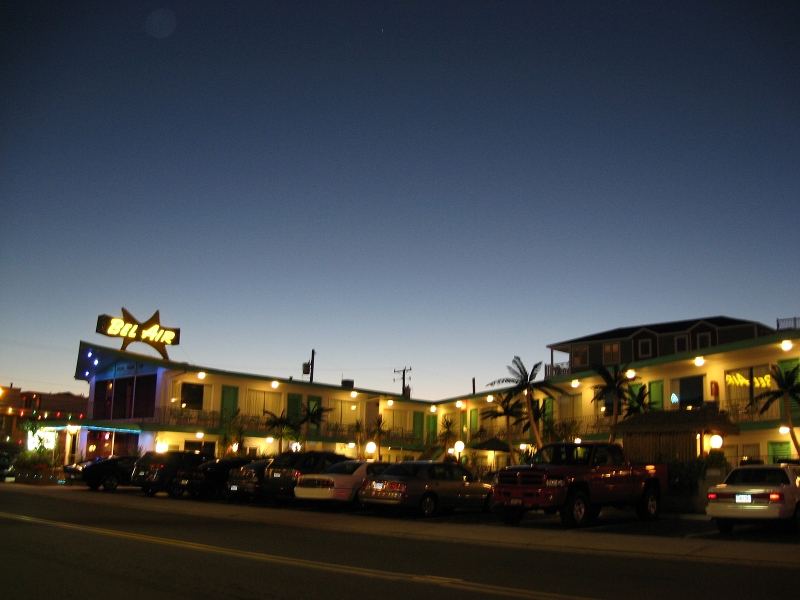 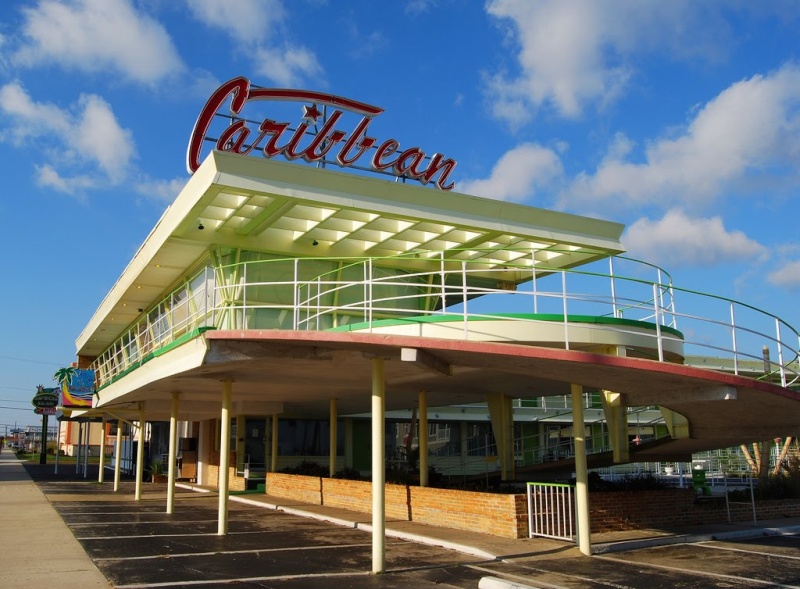 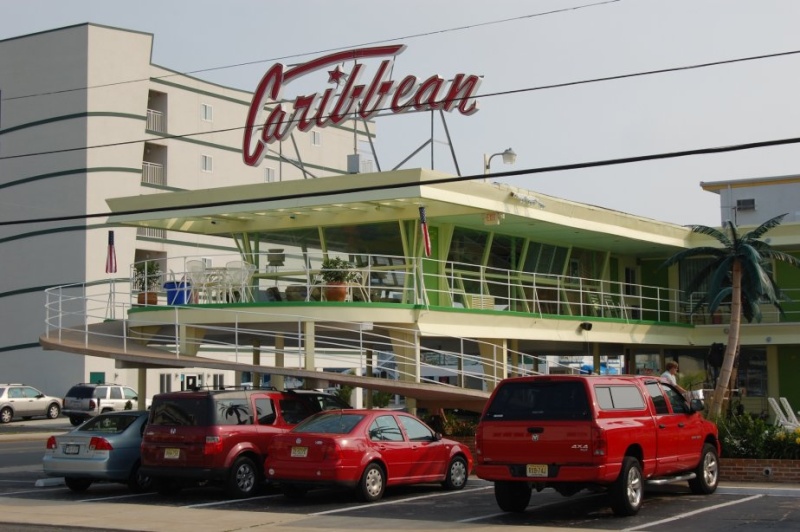 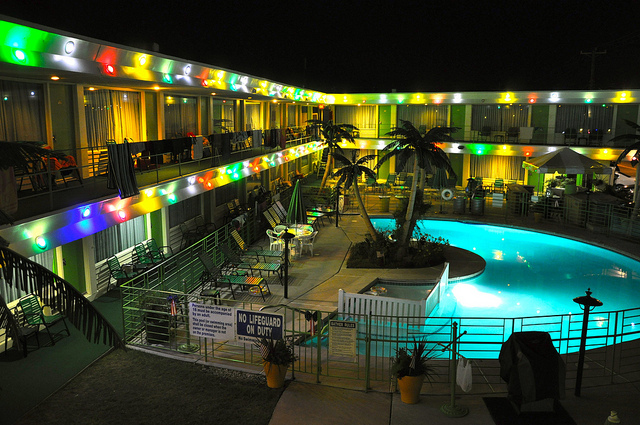