For the last 10 years I've had a little sideline business selling vintage car magazines on the Southern California swap-meet circuit. Any time a guy buys multiple copies of the same issue, I always find out why. After all, SoCal is the birthplace of hot rodding and, more often than not, binge buyers have a great story to share. In the case of Ron Martinez, a television producer on shows like Knight Rider; Miami Vice; Murder, She Wrote; and Sabrina the Teenage Witch, his purchase of a thick stack of the July '67 HOT ROD sounded the alarm. Why so many copies? "I own the Invader-it's the car on the cover," he said, pointing to the futuristic machine on each issue. Ka-boom. 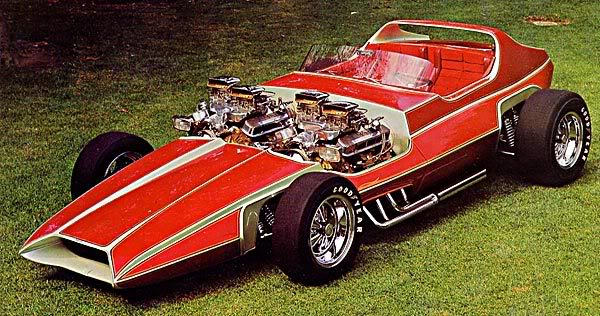 "Sure does. I've just restored it."

Thus begins the story of the Invader's return to HOT ROD magazine after 36 years. In our 55 years of existence (this month) there have been exactly 660 covers, the vast majority of which depict landmark vehicles. But after their moment of glory, many of these creations submerge into obscurity, never to be seen again. Not so with the Invader. 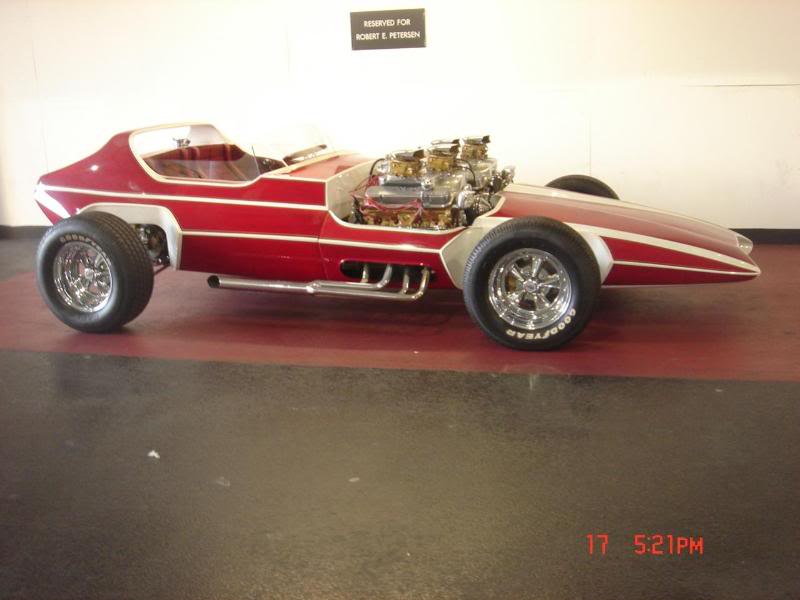 While its crowning achievement was a double win at the 1967 and 1968 Oakland Roadster Shows, where it was twice deemed America's Most Beautiful Roadster (the rules have long since been changed to prevent such monopolies), the Invader continued wowing crowds by the millions all over the world for the next 20 years as part of the California Show Car fleet. Knowing that car-show promoters are eager to pay appearance money for machinery that will, in turn, attract paying showgoers, California Show Car supplied a steady stream of mechanical eye candy to car show promoters in 31 countries. 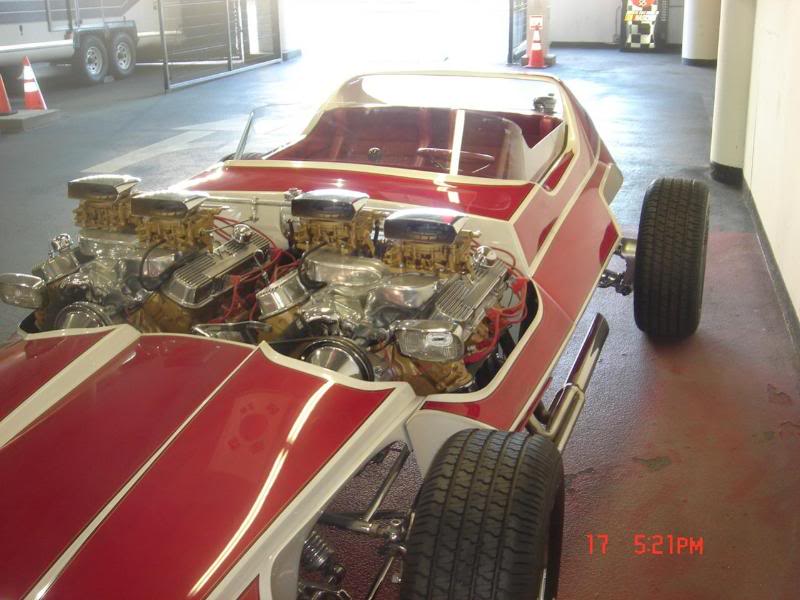 The Invader was among the very first of California Show Car's stable and is truly a monument to the ingenuity of builder Bob Reisner. But follow-up machinery like the Milk Truck, Pink Panther, Sand Draggin', Bath Tub, and Outhouse got more outrageous and strayed off course. To "serious" hot rodders, these creations focused on lowest-common-denominator novelty appeal rather than progressive construction methods and functionality. While we sneered, these ever-more outrageous creations were a hit at shows all over the world, but it all came to an end in 1972 as Reisner and Jay Ohrberg dissolved their partnership and went on to pursue other interests. 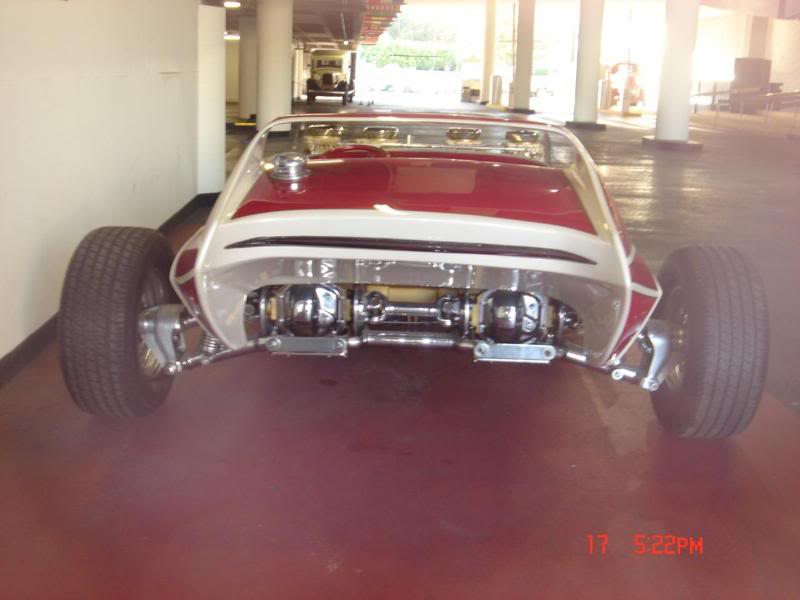 In 1998, the Invader was on tour in Korea, but during its return voyage to the U.S. aboard a freighter, it came loose in its shipping container, and the delicate handformed aluminum bodywork on both ends was smashed nearly flat. Problems with the import duty process forced a fast sale, and that's where Martinez entered the picture. Knowing the car's impressive history, he bought the distressed custom and sent it to Scott Guildner in Van Nuys, California, for a complete restoration so it could be displayed at the 50th anniversary edition 1999 Oakland Roadster Show. With a fresh coat of Candy Brandywine over white pearl, the guys made the deadline, but they encountered plenty more than they bargained for. For instance, both differentials had been gutted over the years for easier pushing into and out of coliseums, rust had "invaded" both Pontiac 400 engines, seizing them tight, and the twin B&M hydro-sticks were out of commission. 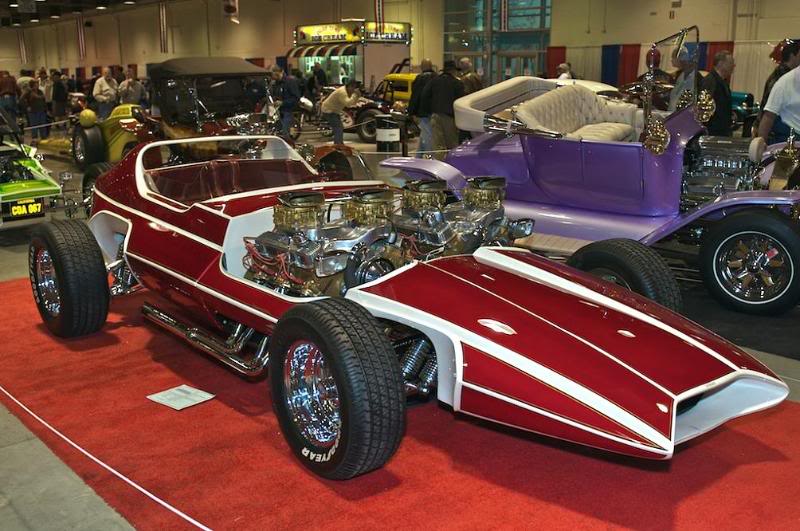 Now that's all been taken care of. Though Ron started each engine and drove the car during our photo shoot, it isn't registered for street use, and there are other issues that make regular driving a risky proposition at best. First, this thing is wider than a Hummer. We used every available inch of a huge roll-back transport truck's bed moving the Invader to our photo locations. The rear suspension, while beautifully chromed, demonstrates a frightening tendency to toe-in the rear tires under power and will put the car sideways with anything more than half throttle. Then there's the steering. With over a half-ton of all-iron Pontiac GTO power sitting atop the front tires, the Corvair steering box is overworked. But Ron is willing to live with these quirks rather than making permanent changes and altering the car's character. We're with him. Though we rail against trailer queens every chance we get, the Invader's history and its fascinating tale of survival grant it a certain immunity. Rare is the hot rod that doesn't have to be driven to prove itself. Invader is one of them. 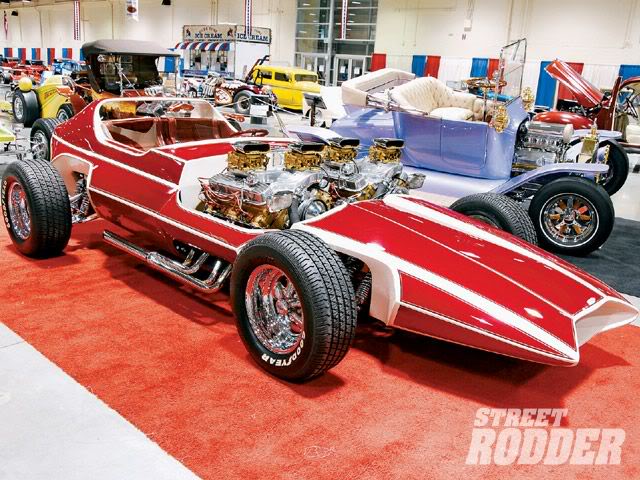 Reisner Strikes Again, And Again, And Again ...
Love 'em or don't, Bob Reisner masterminded the creation of some of the most memorable show cars of the late '60s and early '70s. Like many of Tom Daniel's creations, their availability as plastic model kits ensures an enduring place in the hot rodding cosmos as millions of kit-builders get to know them on a truly hands-on level. Though Monogram Models (now Revell-Monogram) brought Daniel's vision to polystyrene, Eldon Plastics had a lock on Reisner's fruits in 1969. While Eldon Plastics is long gone, the tooling has been revived by Japanese model-maker Doyusha as the California Show Car series. And all can be found at your local hobby store or on the Internet. Also, a 11/464-scale assembled die-cast replica was tooled by Mattel and is offered individually and as part of a HOT ROD magazine four-car set. Again, check your local hobby store for availability. We wish to thank www.showrods.com for providing the box art samples.

Re: The Invader - Bob Reisner

In 1967, the only thing bigger than the Invader was that chick's hair. 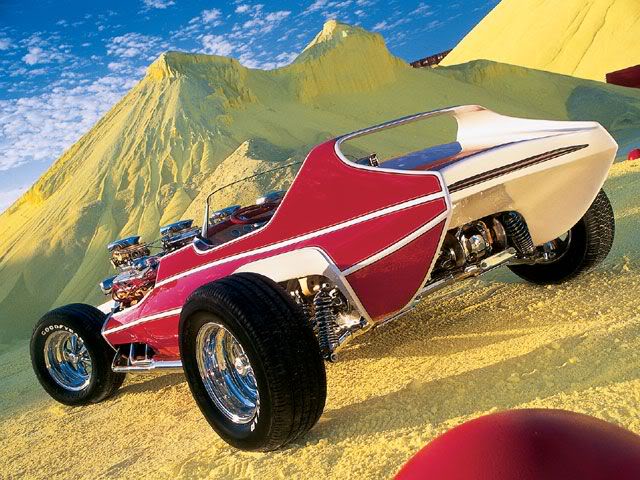 The dual slant-pan four-speed Hydra-Matics were rebuilt by Steve Carr (no relation to Art Carr) of Sun Valley and feature full-manual valvebodies. A single console-mounted stick shift controls both transmissions via tandem brackets and linkage. Long before billet, Reisner's home fabbed steering linkage was an engineering marvel. The only weak spot is the overworked non-power-assist Corvair steering box. We watched current owner Martinez work up a sweat just making a three-point turn. 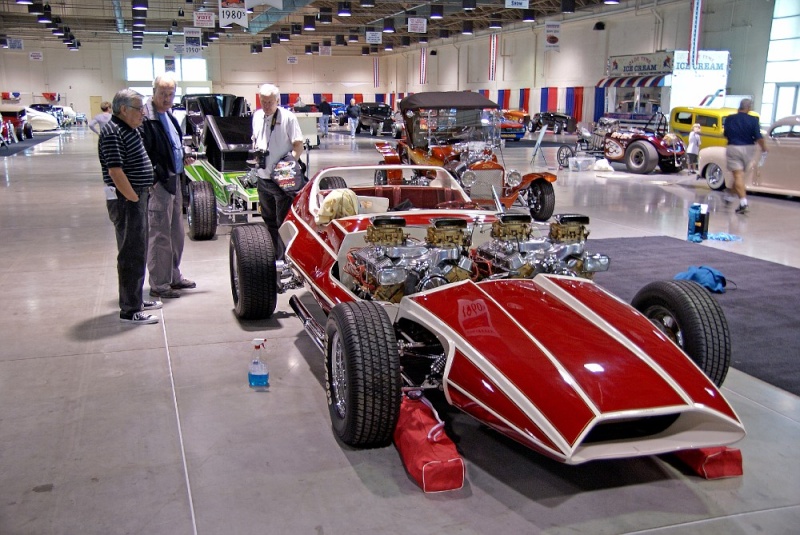 Eldon/Doyusha's rendition of our feature car appeared in 1969, almost three years after the real car was completed.

Inspired by the weekly cartoon TV series of the day, the Pink Panther's front fenders and hood is said to resemble the feline cartoon star's cheeks and nose if you squint. A lot. 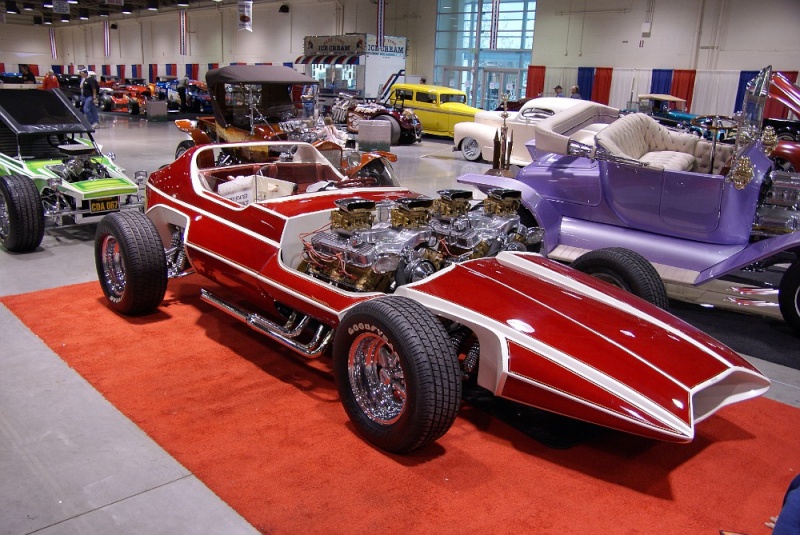 With its dual ersatz 6-71 huffers, early Hemi mill, and twin French bathtubs, the Bathtub represents a crushing defeat in the battle between form and function. The loser? Both. 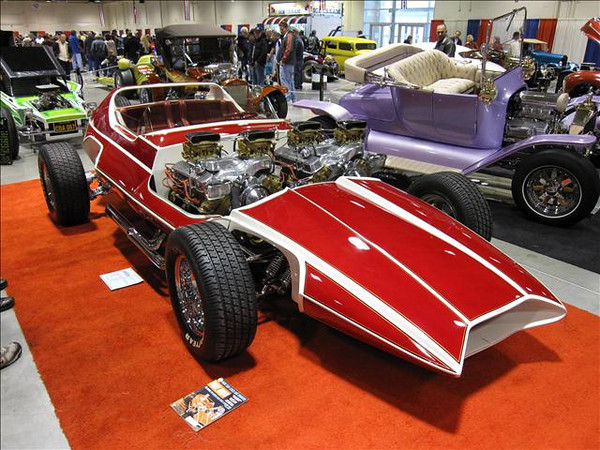 Ron had HP Automotive in Sun Valley, California, rebuild the twin 400s, boosting compression from 10:1 to 11.5:1 for a more radical sound. Melling hydraulic cams with 0.480-inch lift and 230/230-duration at 0.050 also add to the incredible drumming sound as both engines idle and run in unison. Note the elaborate synchronized throttle linkage working the M/T cross-ram-mounted Carter AFB carbs. 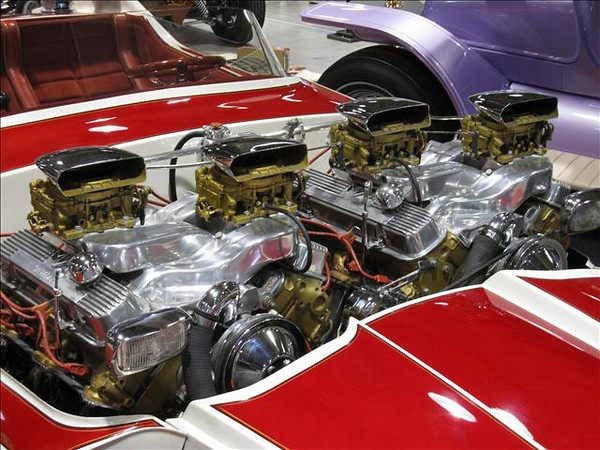 Getting in and out of the Invader isn't easy, but once seated, the twin buckets, covered with fresh velour by Jim Collins, are very comfortable. Each engine has its own bank of Stewart-Warner gauges and console-mounted control switches. Martinez starts the driver-side motor first, as it is the only one equipped with an alternator to keep the batteries charged. 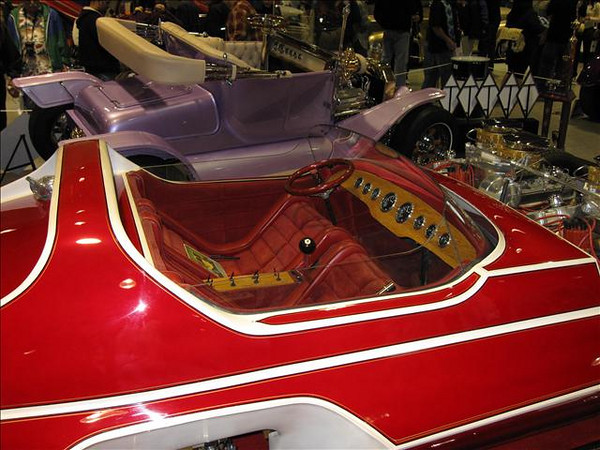 The Invader uses a pair of '61 Jaguar differential assemblies. The passenger-side differential has limited-slip, the driver-side does not. 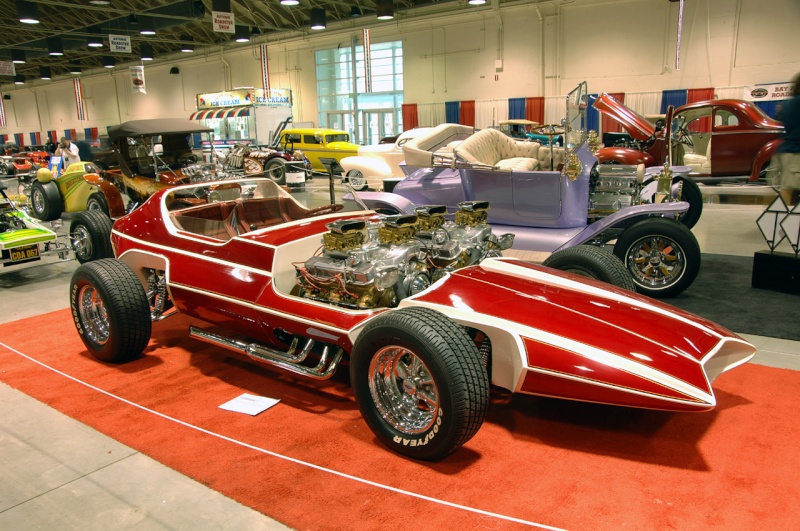 With a fresh coat of Candy Brandywine over white pearl, the guys made the deadline, but they encountered plenty more than they bargained for