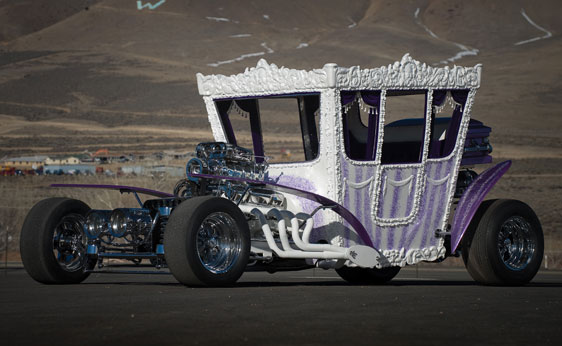 The popularity of customs, hot rods and show cars spread quickly around the country in the Sixties borne on the pages of magazines like Rod & Custom, Hot Rod and myriad imitators. Popular media from beach blanket surf movies to national television recognized that including a hot rod or, better yet, an exclusive custom car broadened the appeal of their programming and gave it trendy immediacy. Rods and customs soon appeared both incidentally and as important bit part players. 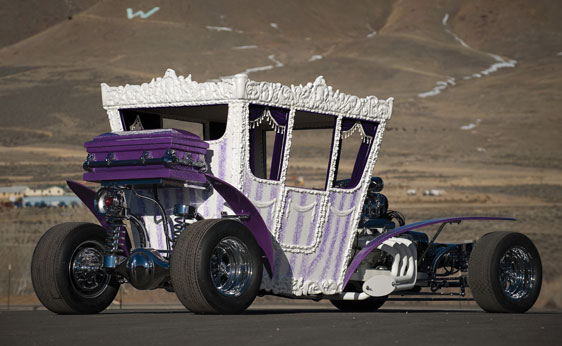 The force in creating these themed vehicles was George Barris, the “King of the Kustomizers”. Ed Roth appreciated his commercial acumen while also being disdainful of it. He observed, “… whenever the studios’d call I’d always send ‘em over to Barris because he had that stage presence to sell those 500 buck jobs for five grand.” 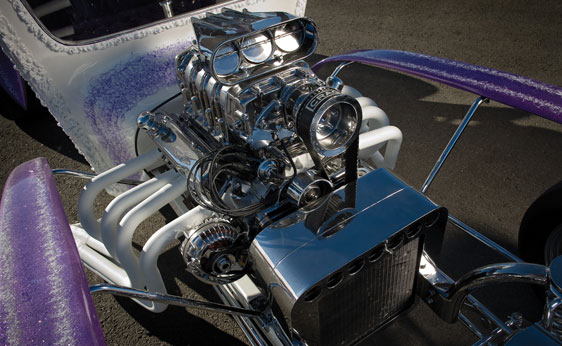 As the Sixties advanced Roth’s interests broadened. Roth tee shirts were in such demand that he had to adopt standardized silk screened designs to keep up. Mail order supplanted sales at car shows where the Outlaw and Beatnik Bandit had drawn traffic. Revell’s royalties on Ed “Big Daddy” Roth customs – said to be only 2¢ per model – were a gusher of cash in the Sixties when Revell was selling them by the millions. 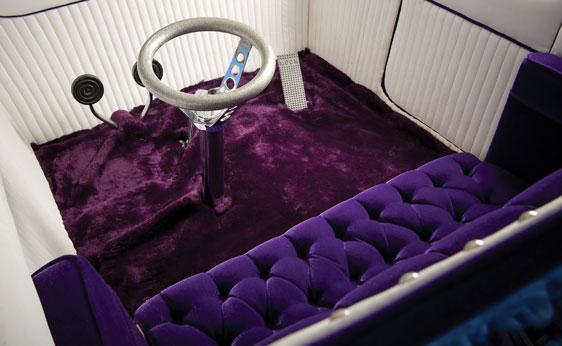 Roth looked ahead and saw the future in stable, fuel thrifty, simple and inexpensive three-wheelers. A few years later he took to driving a tiny Honda 600, another example of how Roth, unbound by conventional thinking, was years and even decades ahead of his time. 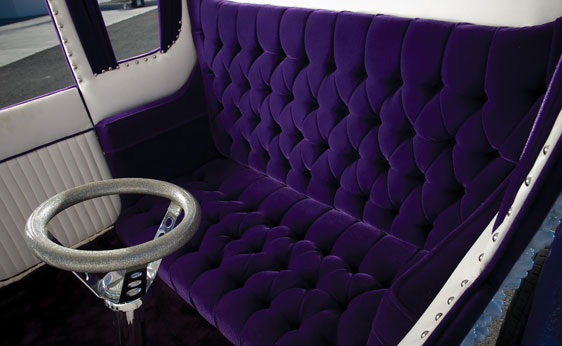 Eventually the producers of ABC-TV’s The Addams Family series came to Roth requesting a distinctive automobile for the ghoulish family to drive on television. He rose to the occasion with one last outlandish creation, Druid Princess. 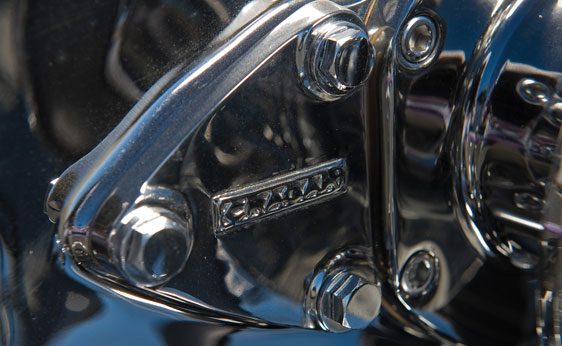 In a departure from Roth’s practice, Druid Princess (named by Robert Williams – the Druid thing was big in those days) was a built up rod with plywood covered in fiberglass. Its design owed nothing to aerodynamics. It was all about style and faux elegance.

Built by Dan Woods and “Jake” Jacobs on a 2x4” rectangular steel tubing frame, Druid Princess had coil spring live axle suspension with drum brakes at the rear only. Power was supplied by a B-series Dodge 383 and a Torque-Flite automatic. Roth went to great lengths to include a 6-71 Jimmy blower with Hilborn injection system. It was a fake, hollowed out and covering up a Carter AFB four-barrel. Holes were drilled in the blower case to reach the carb adjustments but everything on the blower appeared to work, from the injector butterflies to the drive belts and pulleys. It just didn’t pump any air. White painted long head pipes joined up in large collectors with huge oval cutout covers, then disappeared into a conventional rear-exit exhaust system, chromed of course.

Its front axle mounted full size blackwall tires on chromed Cragar S/S wheels with similar Cragars at the rear. The suspension was chromed at both ends and giant canister-style chromed brass headlight housings, patterned after a 1909 REO, were mounted close together, low and in front of the axle center line. If something on Druid Princess wasn’t painted white it was chromed.

The coach-shaped center door body was built from plywood sheet. Plywood was also used to form the long, surfboard-shaped blade front blade fenders and their brief rear counterparts. The body was elaborately trimmed with complex decorative elements. Roth described how they came about in the book “Hot Rods by Ed Roth and Tony Thacker (MBI, 2007, a delightful cross-section of Roth-iana and first-person recollections well worth the $25 MSRP and also the source of the earlier Roth quote.)

“Those deco pieces come from a picture frame manufacturer in Hollywood…. I went over to the guy’s shop & there was all these workers mixin’ up this mixture of horse hoof glue & sawdust into this real doughboy type guck. It smelled pretty good but tasted terrible. Then they’d pour it into these floral-shaped molds. Some looked like little angels & others like these real swirly flowers. … I knew they were right for the Druid Princess decoration. I got me a coupla sacks full for 25 bucks and went home & started cuttin’ and pastin’.”

Roth insisted that the small luggage trunk behind Druid Princess’s coach be a child-sized coffin – not just something that looked like a coffin but the real deal. That took some doing since undertakers didn’t sell coffins except to contain remains. Roth finally found the son of an undertaker who was hip. He brought $200 and a van to the back alley after working hours where lucre and casket changed hands. The battery and a surplus North American Aviation aircraft gas tank were interred in the sarcophagus. Larry Watson veiled the Druid Princess in purple – a unique process that produced a unique texture and pattern. The interior was upholstered with purple diamond tufted seats piped in white. The interior trim was white with purple piping. Purple velvet draperies with white tassels trimmed the windows.

Somewhere in the course of building Druid Princess ABC called with the news The Addams Family had been cancelled. Princess was completed as a show car and was featured on the cover of the Rod & Custom January 1967 before being dispatched on the show circuit. It was Roth’s last magazine cover car.

It was eventually found by Roth’s son Darryl Roth and restored with its color scheme reversed to predominantly purple with white accents. The present owner acquired it in January 2006 and it was immediately sent to the Detroit Autorama to join the other featured Roth cars in that year’s show. In 2007 the owner commissioned Fritz Schenck to conduct a complete frame-off restoration, at which time it was returned to the original colors, including the complex veiled paint process. 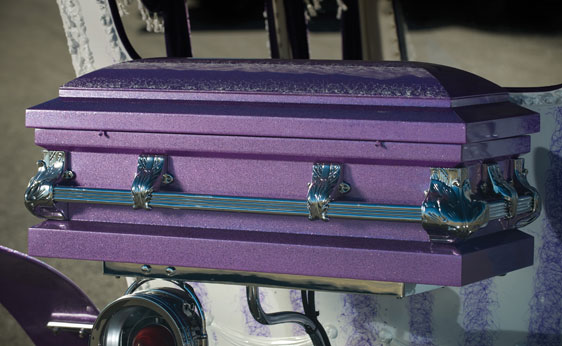 It was selected as one of the lead cars in Rod & Custom’s reprise of “Fifty Years of Rod & Custom”. Roth, attired in the grey leggings, baggy pantaloons and frilly white shirt appropriate to a Druid Princess’s footman, is pictured with it in the lead shot.

It is Roth’s last show car. It would be two decades before he turned out his next sizable four-wheeled concept, L.A. Zoom in 1989. Saved by Darryl Roth, restored to show car condition and featured in magazines and the most important shows, its condition is impeccable. It is one of Roth’s most recognizable show cars and marks a watershed in his unrelenting pursuit of advanced ideas, designs and whimsical creations. 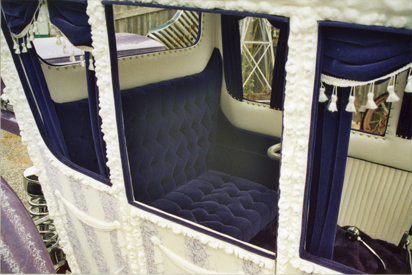 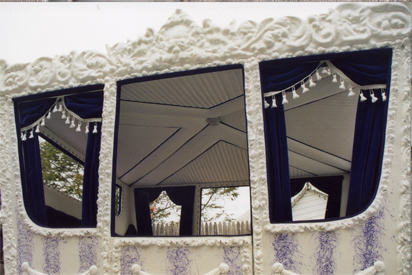 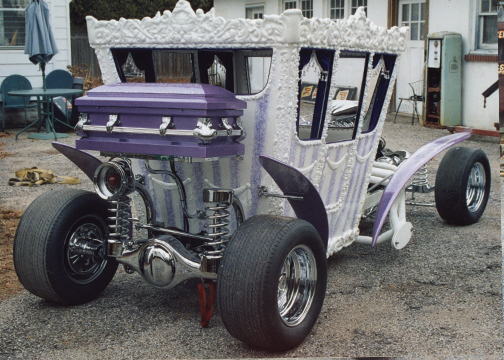 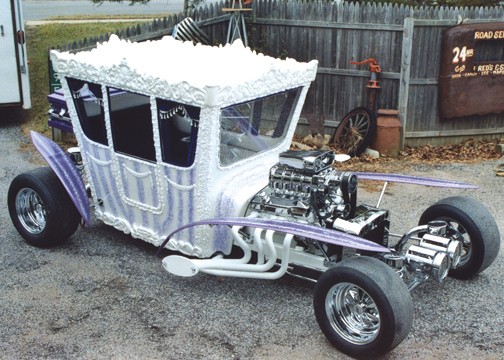 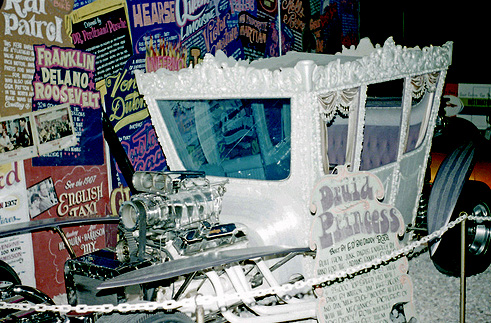 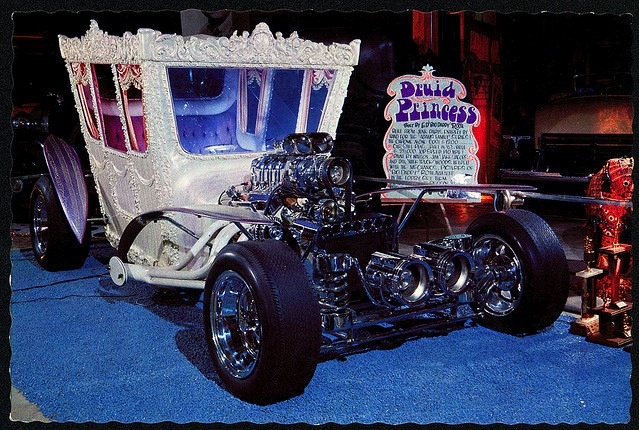