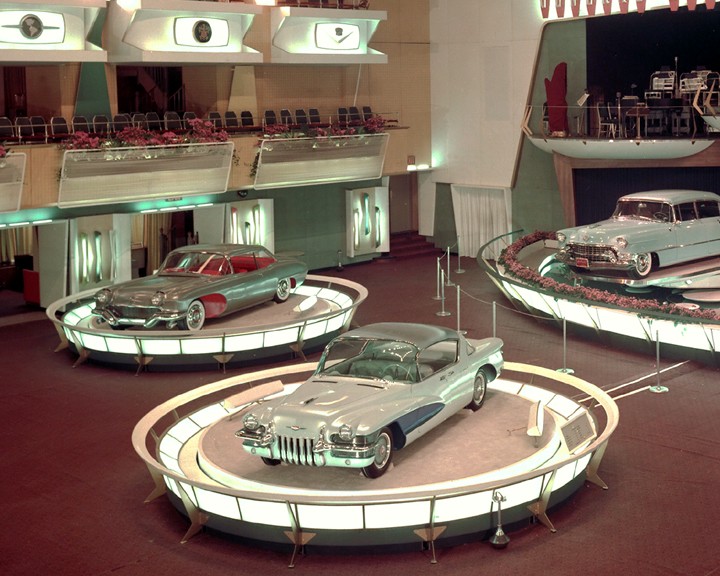 A particularly unusual part of the history of the GM Motorama show cars can be found in a pair dubbed LaSalle II. Named after Cadillac’s companion marque, last produced in 1940, these cars were created at the time V8s were extremely popular with the motoring public. Increasingly greater horsepower was being achieved with growing cubic inches, higher compression ratios, multiple carburetion, etc., and this did not seem to be the time to test public reaction to a V6 engine, but that is exactly what happened with the LaSalle II project.
The pair of fiberglass LaSalle IIs show cars were not divisional specific. One was a six-passenger, four-door pillarless hardtop (XP-32, Shop Order 2217) and the other a diminutive two-passenger roadster (XP-34, Shop Order 2220). The pair was named after the first car Harley Earl designed for GM – the 1927 LaSalle. The four-door (with the rear doors being the suicide type) had a wheelbase of 108 inches and an overall length of 180.2 inches – just about the same length as some alternative sports cars of the day like the Muntz. A more modern comparison is a mid-sixties Falcon. The roadster was even smaller with a wheelbase of only 99.9 inches and an overall length of 151.7 inches. Ground clearance for both cars measured 5.1 inches. In an era when longer, lower, wider ruled the shape of the automobile, the LaSalle IIs flew in the face of established principles, though they were certainly low. The hardtop stood 69.5 inches high, while its companion roadster peaked at a mere 42.8 inches. Each fiberglass body sat on a custom-built steel frame with an independent suspension utilizing torsion bars in front. The windshield for the LaSalle II sedan was an “astra-dome” type much like that of the Biscayne. Its exhaust pipes, mufflers, and ports were housed in the rocker sills on the roadster, while the exhaust exited through a port in each lower quarter panel for the sedan.
Frontal styling for both LaSalle IIs had vertical grille openings based on the canceled 1941 LaSalle. The side coves of the pearlescent white cars were painted a contrasting blue (Bahama Blue on the roadster and LeSabre Blue on the Sedan) thus dominating the profile view of each car; they foretold the look of the Corvette for the following year. Carl Renner performed much of the design work on these cars and also worked on the restyled Corvette for 1956. He even went so far as to propose a 1957 Corvette based chiefly on the LaSalle II roadster’s styling, but that is as close as this show car got to production. 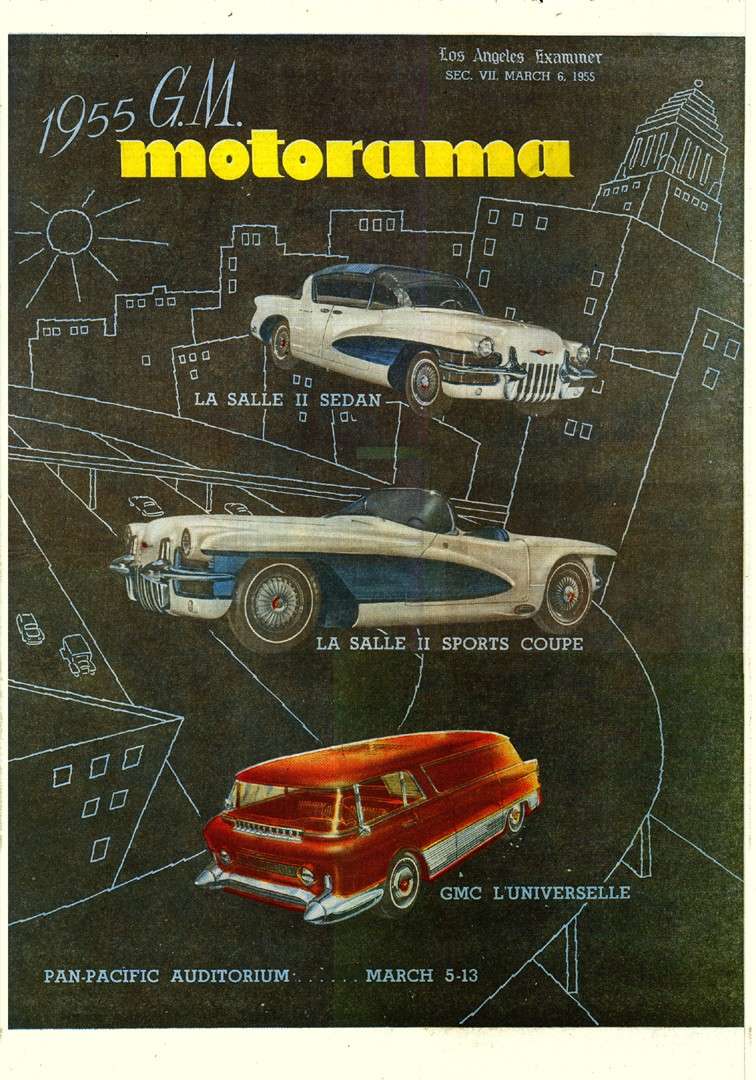 As already stated, the LaSalle IIs featured V6 engines, although the ones in the actual Dream Cars were aluminum castings without internal components. Even though these particular V6 prototypes were nonfunctional, GM had a V6 research program in the works over the preceding seven years. The incomplete engines mounted within the LaSalle IIs represented aluminum (heads and block), fuel-injected, double-overhead (DOHC) cam, power plants that would produce 150 horsepower. Today such engines are commonplace, but in 1955 they were quite radical. If they had gone into production, the history of the American automobile might have been very different – at least that is the opinion of Joe Bortz as quoted in an article by Charles D. Barnette for the Cadillac & LaSalle Club’s The Self Starter publication. Bortz, who owns both LaSalle IIs said, “To me these cars are the turning point in American history. At this time in 1955, long before the European automotive invasion into the American market, General Motors had already thought of and physically produced these two cars which had aluminum block V6, fuel-injection, double-overhead cam engines with independent rear suspension. As you know, during the 1960s, 1970s, and 1980s, these were the ideas that were brought forward from Europe, and eventually Japan, that set the American automotive market on its ear. As I always say, this was the turning point in American automotive history, where if they [GM] would have stepped up on their ideas with these two LaSalle automobiles, American automotive fortunes would have been greatly changed.” 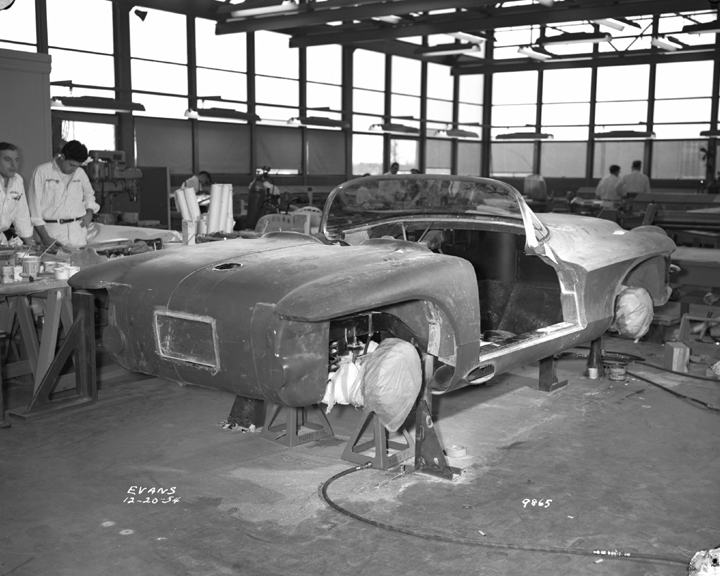 An additional feature of both cars was 13-inch turbine-style wheels with brake drums cast into their center sections. The wheel was bolted rigidly much further away from the center than a typical arrangement; tire removal meant lifting off only an assembly of the tire and rim, thus leaving the brake setup undisturbed. The bimetal brake drums bolted to the wheel hub to form a brake chamber that inhibited the entrance of moisture and dirt. These drums required only seconds to remove.
The LaSalle IIs were uncannily predictive of the future – a trait most Motorama experimental cars have in common. (Such prognostication was the result of advanced thinking within GM Styling, rather than through gifted insight into what would be in demand in the distant future.) The compact car would emerge in the 1960s and Buick would offer a V6 starting in 1962, an engine that would become very important to Buick in the 1980s. 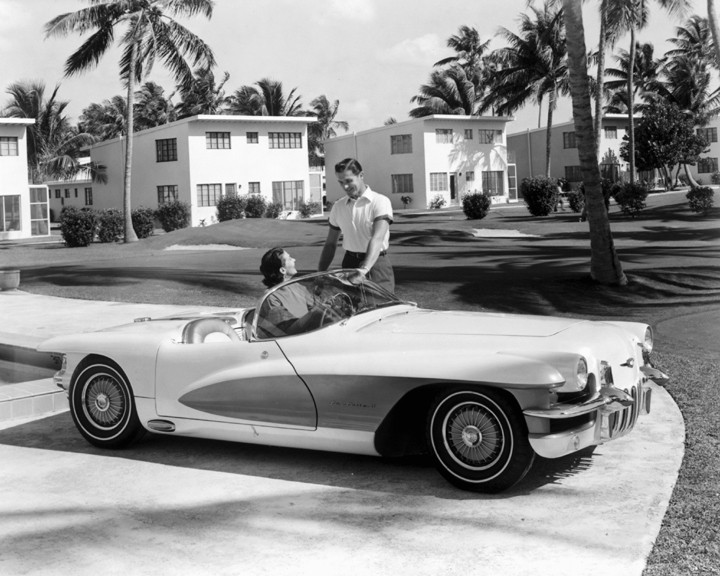 In 1989, both LaSalle II show cars were recovered by Joe Bortz from Warhoops Auto & Truck Salvage near the GM Tech Center in Sterling Heights, Michigan. The roadster had been cut apart much like the 1955 Chevrolet Biscayne, also found at Warhoops. Fortunately, the sedan had not been butchered.
The LaSalle II roadster has the rare distinction of being one of very few work-in-progress cars to be invited to the Pebble Beach Concours D'Elegance. It was shown there along with other surviving dream cars of GM in 2008.
In 2010, Joe Bortz began the final phases of the restoration of the LaSalle II roadster. Part of that process was the design and installation of an electric motor to make the unique car mobile for the first time. A series of videos posted on Youtube.com were produced showing the progress of the project. Part one of the series can be seen here: https://www.youtube.com/watch?v=pnE0-ZVX4Ho&feature=relmfu Links to the remaining portions can be found at the website. 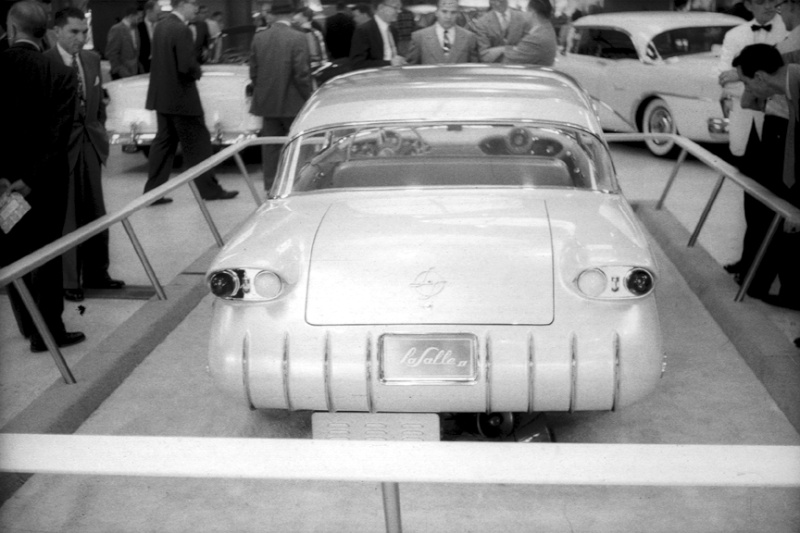 Currently, the LaSalle II sedan is undergoing restoration and will have a similar electric motor installed. 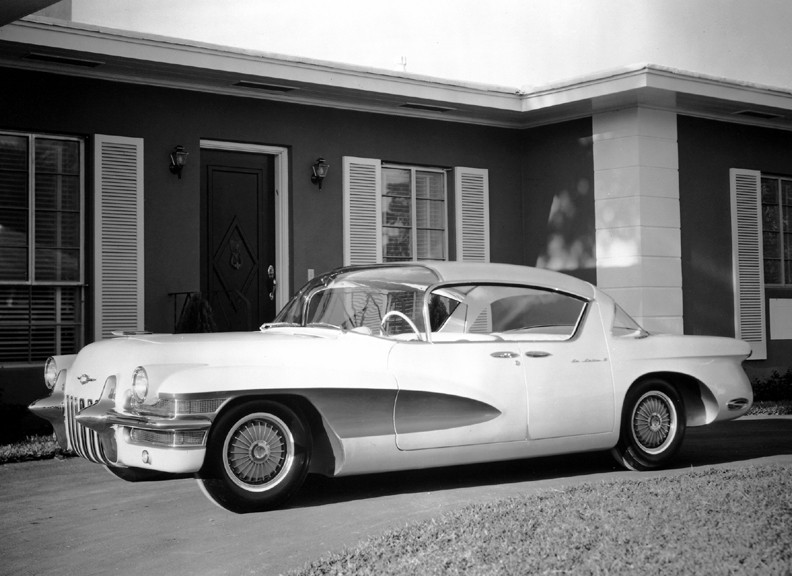