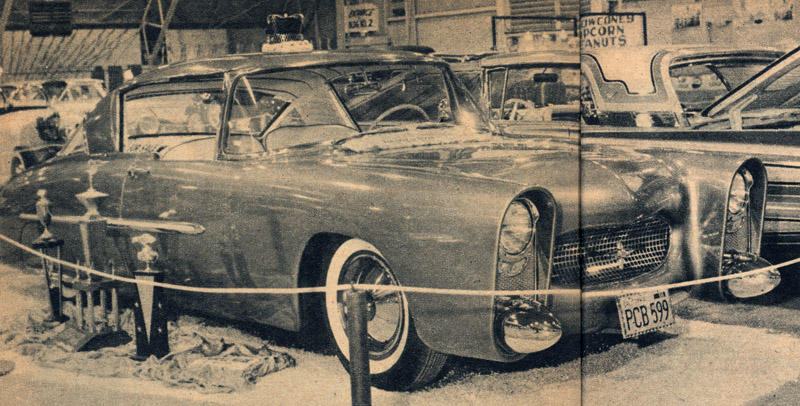 1950 Mercury built and owned by Leo Lyons of San Bernardino, California. Leo's Merc is also known as the "Ultra Modern Merc". Leo transformed his Merc to a low and sleek custom with an original and pace-setting design. The car was built over a span of nine years, it was almost entirely crafted of aluminum. Both front and rear pans were rolled. The grille shelll was molded and a set of Buick headlights were recessed in the fenders. Chrome bullets were installed beneath the headlights. A mesh screen was used as grille, and a center star was installed for decorative purposes. Not much chrome were installed, Leo used a set of 1955 Chevrolet side trim and a 1957 Ford antenna on the deck lid. The rear fenders had open tips with Pontiac exhaust pieces used for bumperettes. The fenders skirts were flared. The body was painted blue, and a luxurious matching interior was stitched up. The dashboard was custom made for both glamour and safety. Blue and white Naugahyde was used for upholstery stitchwork of the seats, headliner, side panels and doors. The build cost Leo $5000[1]

In March of 2013 the Ultra Modern Merc was advertised for sale at the HAMB. The car was located in the Nor Cal Bay Area, and the asking price was 7 500 USD. At the time, the suspension and brakes were gone through, and the car moved under it's own power. It needed a little more work in order to be driven though. Kustomrama listed the car for sale on their Classifieds section. Geoffrey Hacker saw the ad and bought the car in June of 2013. 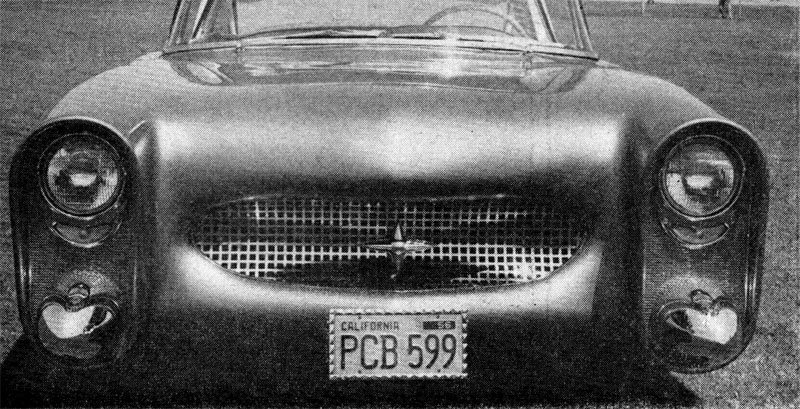 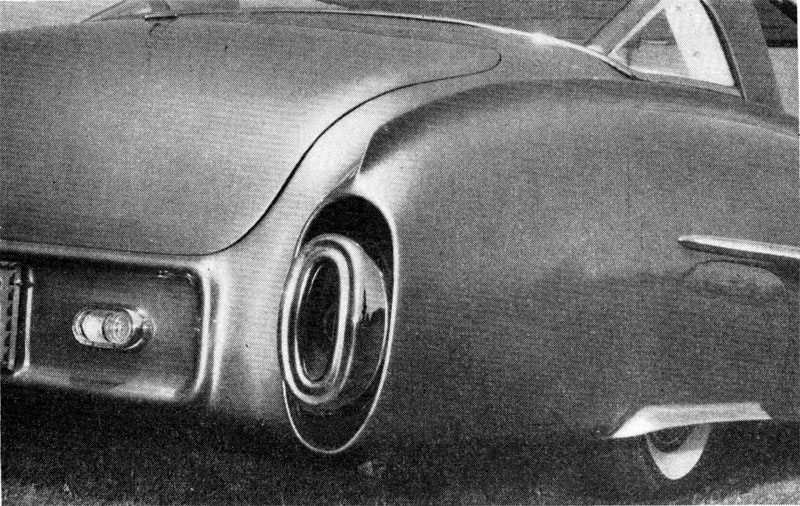 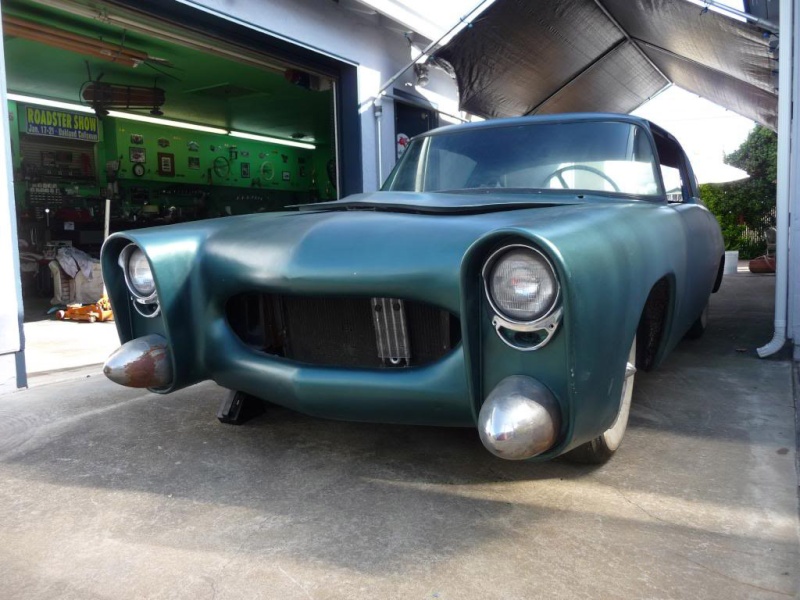 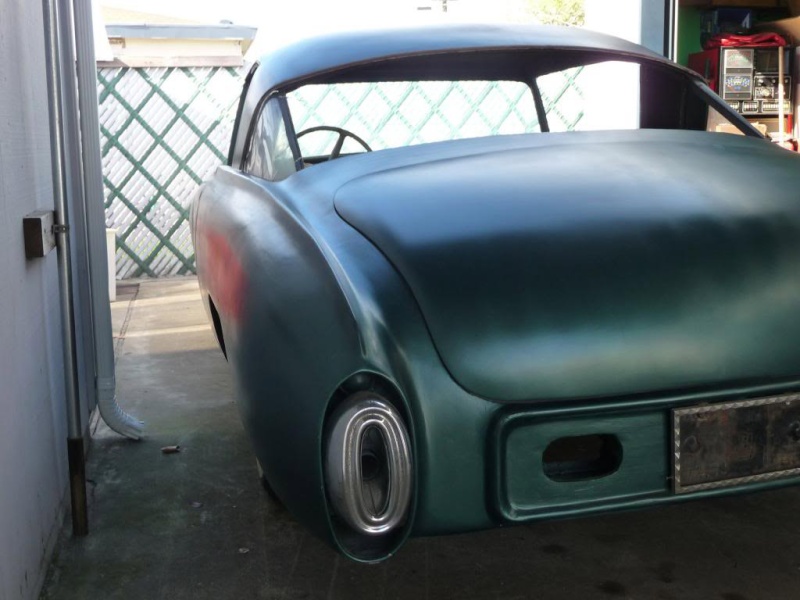 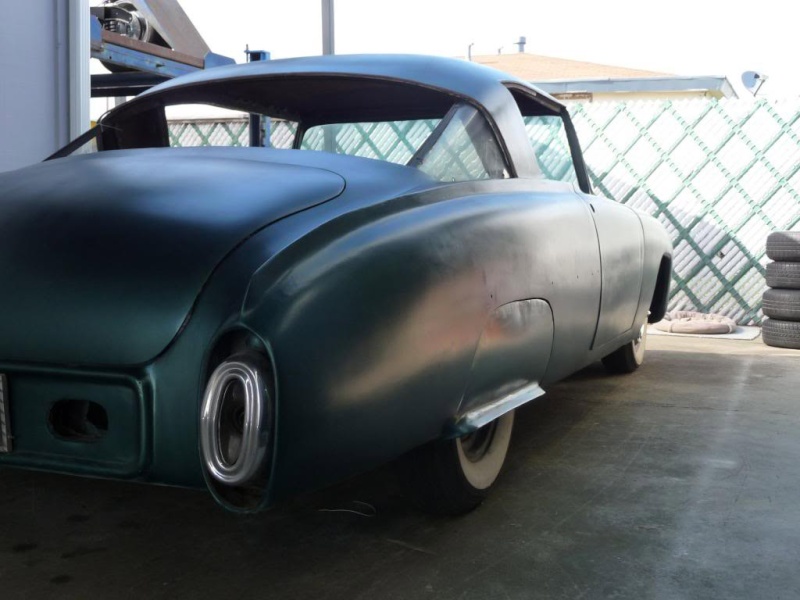 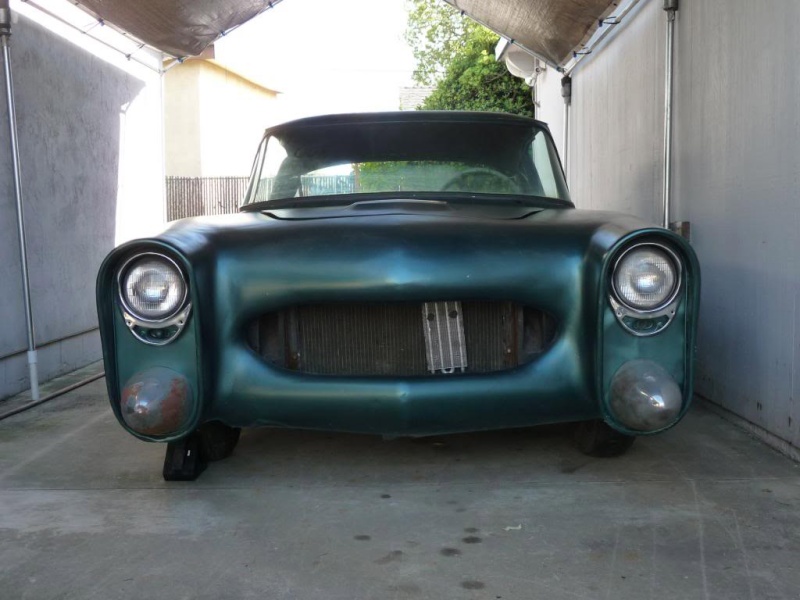 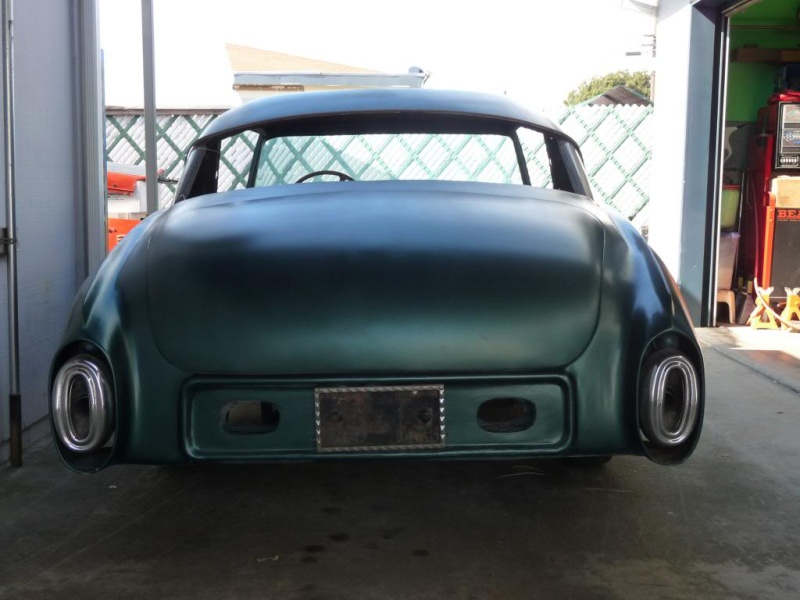 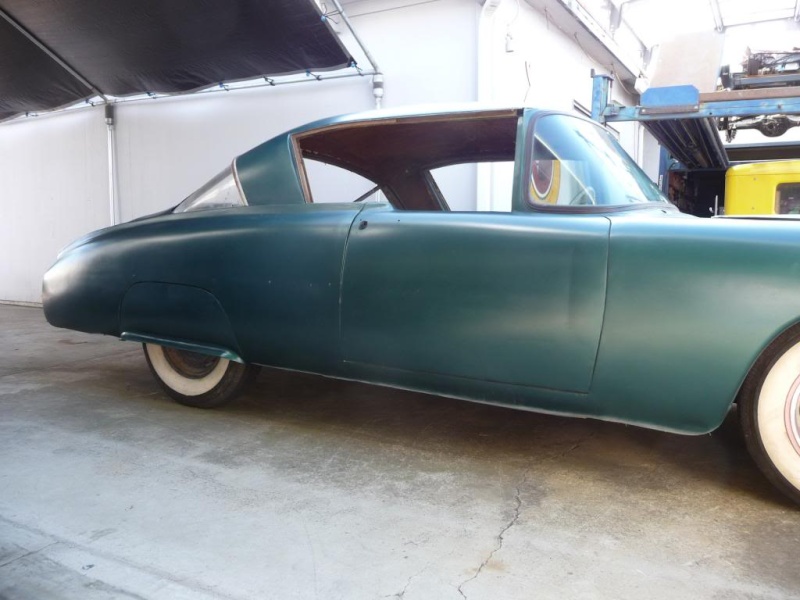 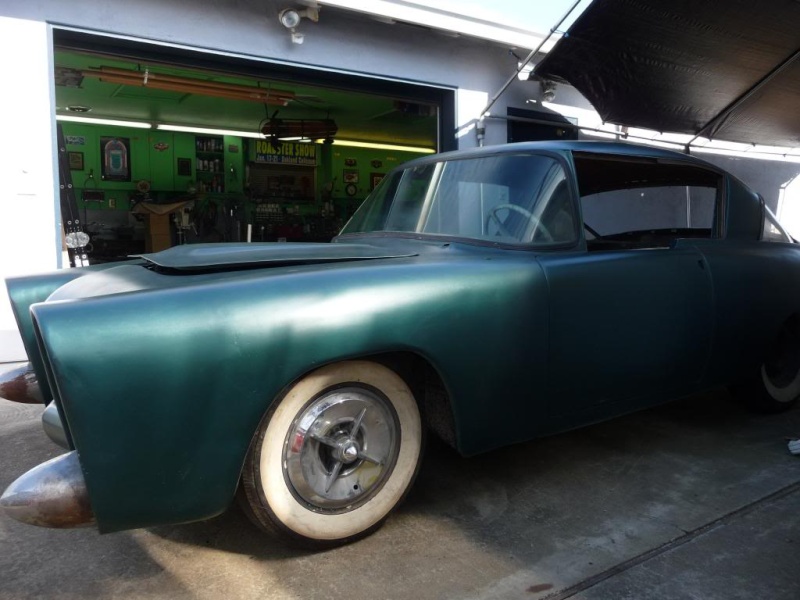 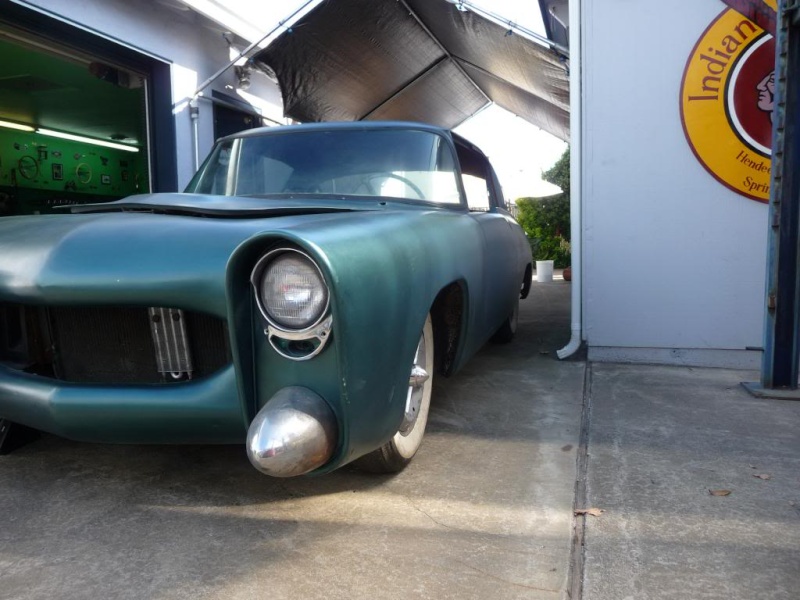 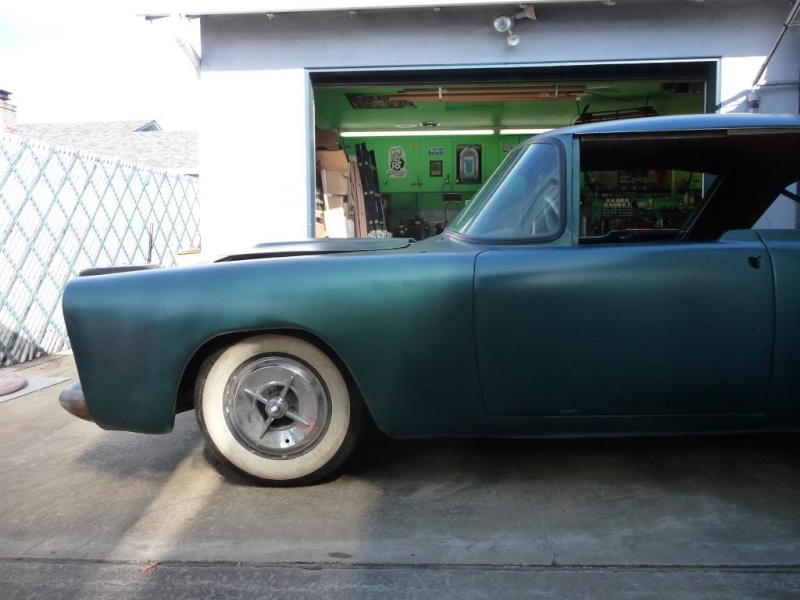 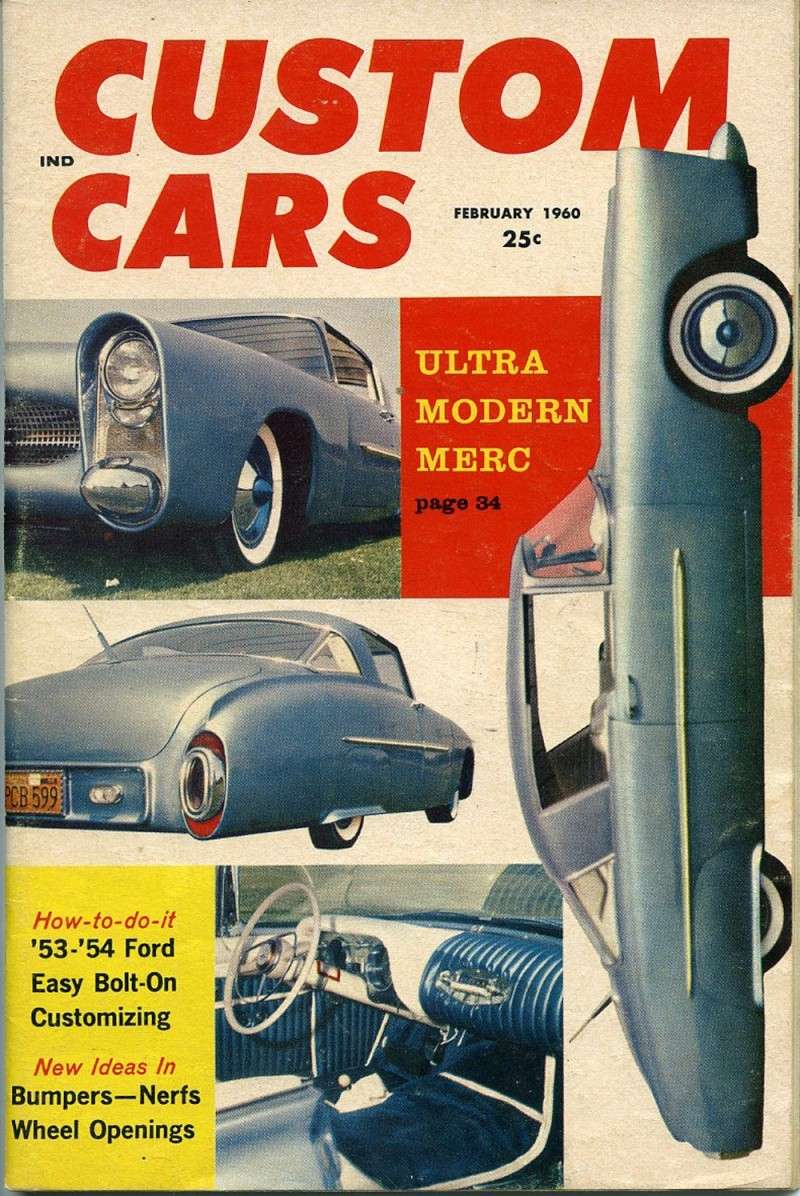 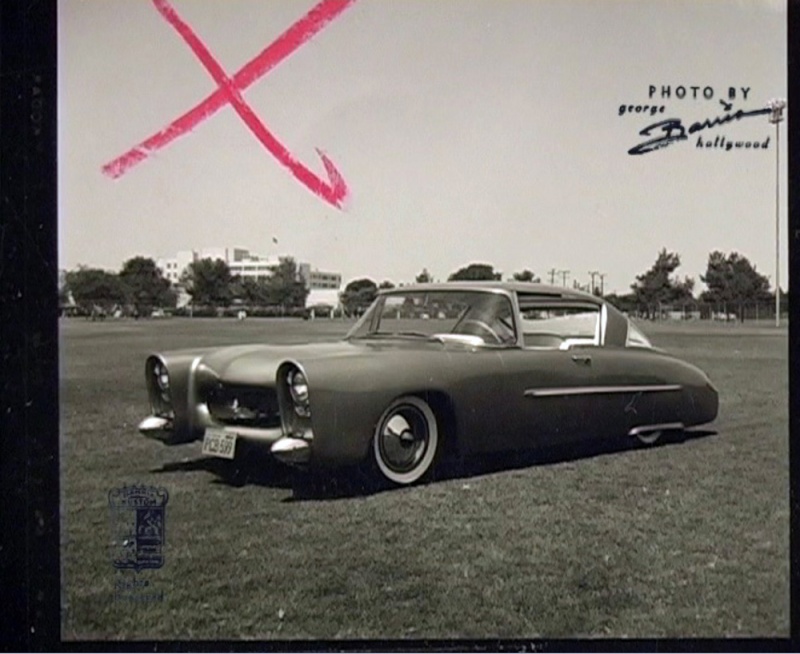 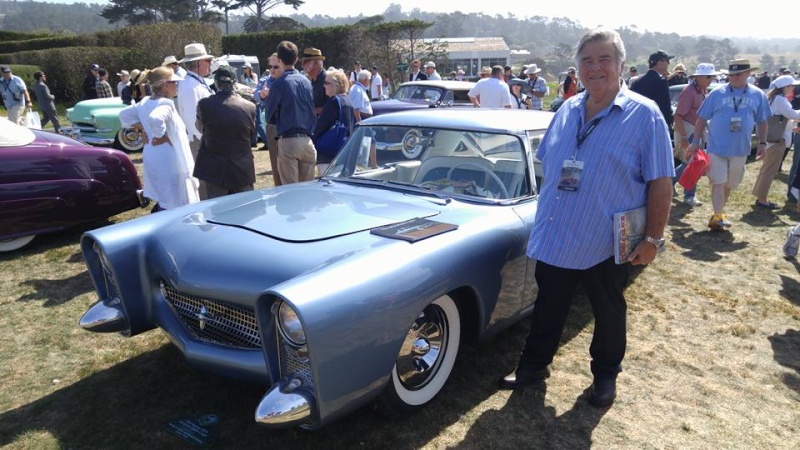 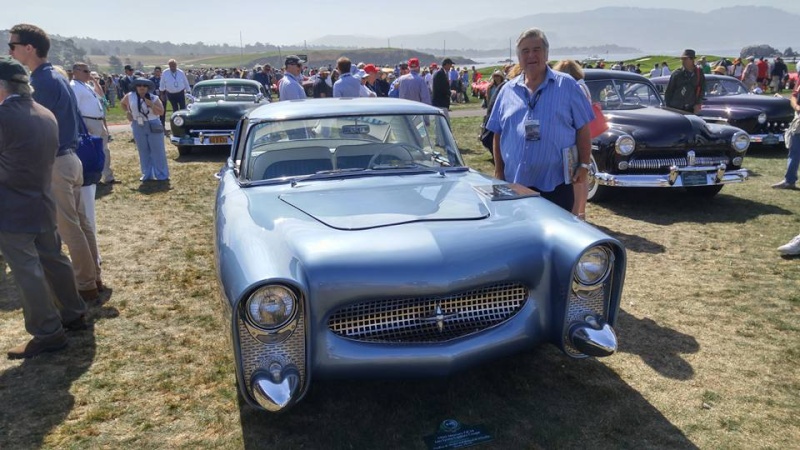 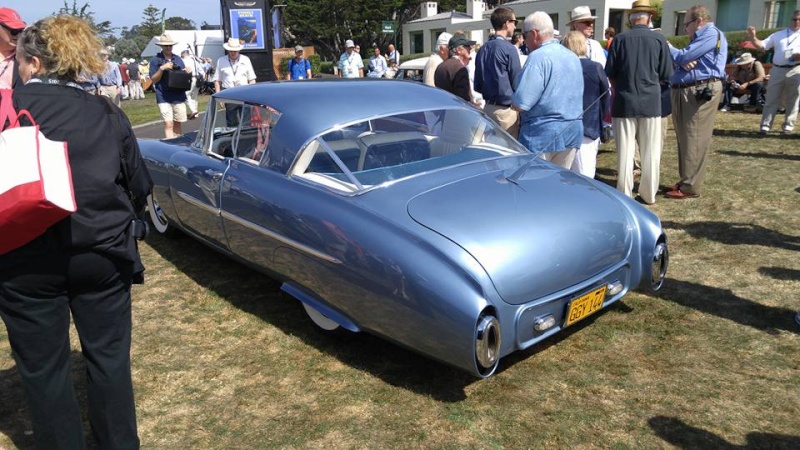 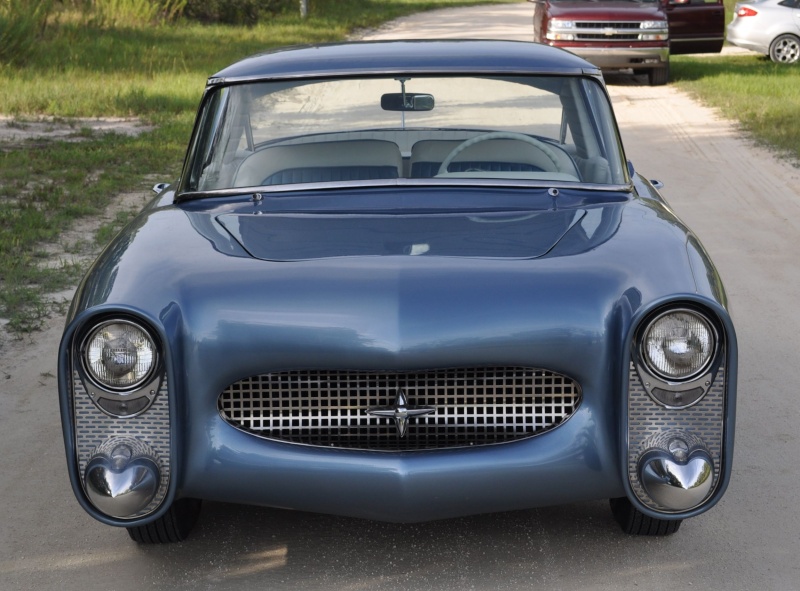 Leo Lyons wasn’t a big name among Southern California customizers in the late 1940s, but that’s not to say he lacked big ambitions. Initially armed with little more than a dream and a sketch pad, he embarked on a 10-year journey that would ultimately produce the last significant custom Mercury of the 1950s, a car he called the Ultra Modern Merc. Largely out of the public eye since 1965, the now-restored Leo Lyons Mercury will make its 2015 debut on the lawn at Pebble Beach, as part of this year’s Mercury Customs class. 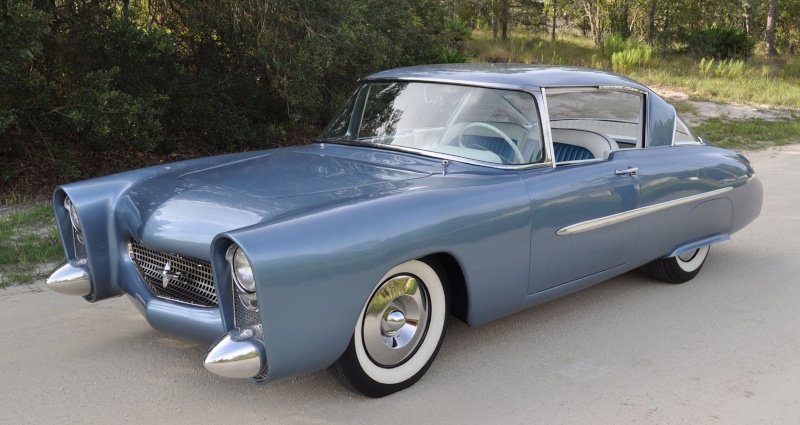 Leo Lyons began laying the groundwork for his custom Mercury in 1949, and by 1950 the 20-year-old had progressed far enough to approach the Ford Motor Company for chassis and body panels to produce 10 full-on customs. Lacking the skills necessary to go it alone, Lyons approached the Barris brothers, George and Sam, for their help in creating the car of his dreams. Sam agreed to show Leo the ropes, teaching him skills like gas welding, while George Barris would mentor Lyons on the Southern California show scene. 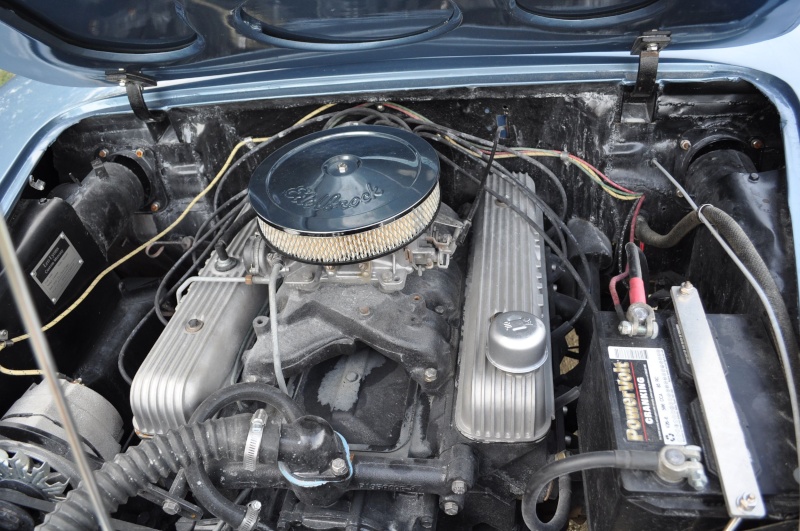 The roof, doors and hood of the Merc were created by California Metal Shaping, the same outfit that crafted the bodies for Lance Reventlow’s Scarabs, and would later go on to make bodies for Jim Hall’s Chaparrals and Bill Thomas’s Cheetahs. Other bits and pieces used on the Leo Lyons Merc came from Buick (the headlamp bezels, dagmars and 322-cu.in. Roadmaster V-

; Chevrolet (the side chrome trim); Studebaker (instrumentation and the original hubcaps); Pontiac (exhaust portlets and rear backup lamps); and Ford (the grille star, steering wheel and horn ring). Aside from the name and some of the exterior sheetmetal, Mercury provided the front windshield, wipers, and door handles. 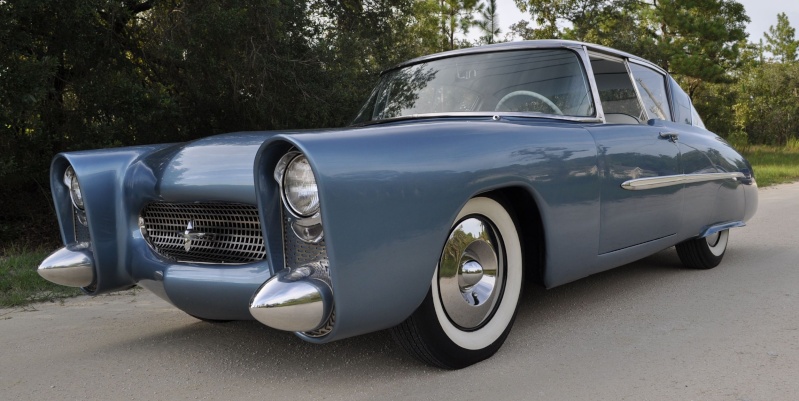 The project took Lyons a decade to finish, and by that time there was little interest in producing an additional nine examples of the Ultra Modern Merc. With a curb weight of 4,500 pounds (thanks to the car’s heavily leaded steel body), performance from the original 188-horsepower Buick V-8 must have been a bit underwhelming, particularly with the Dynaflow transmission. Lyons did claim a top speed of 100 MPH, though there was no indication of how much time or pavement would go by before hitting that mark. 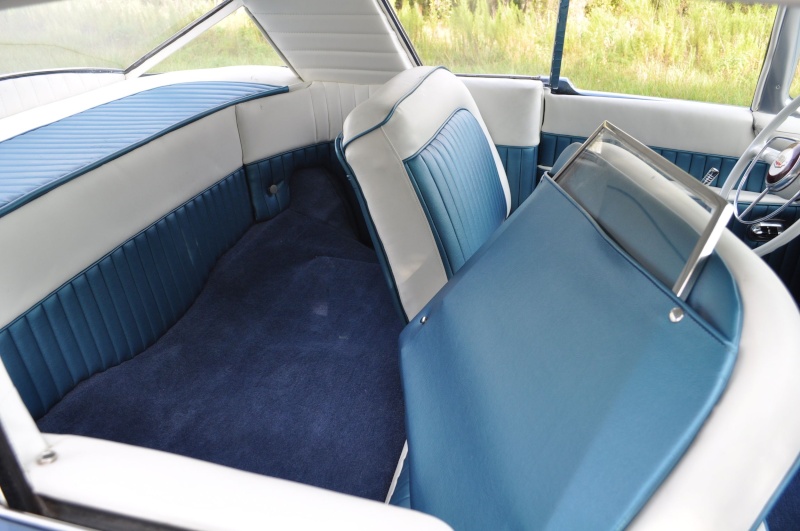 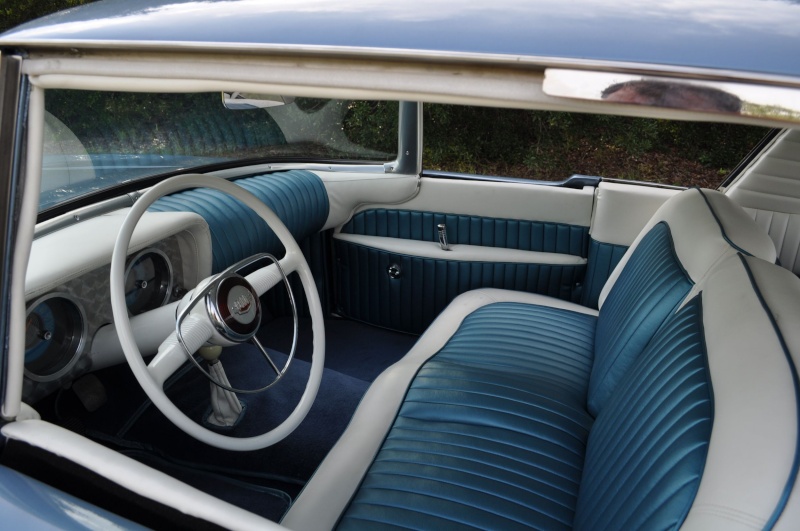 The Ultra Modern Merc made its debut in September of 1959, at the Disneyland Car Club Day. Two months later, it appeared as a featured car at George Barris’s Bakersfield Motor & Boat Show, followed by an appearance on the cover of the February 1960 issue of Custom Car. It would also grace the pages of Rodding & Re-Styling, and would reappear in both publications at least one more time during calendar year 1960. It remained a popular sight at West Coast shows into 1965, but fell off the radar when Leo Lyons sold his creation to Jack Coyle Chevrolet.

The Merc would pass through an unknown owner before landing at Dale’s Custom Car Shop in 1968, its home until 1976. Its next owner was Grant Barber, the man who had sprayed its original coat of blue paint back in the late 1950s, and Grant would hold onto the car until 2004, when it was sold to Craig Hahn. Though Craig would advertise the car for sale from time to time, the right buyer didn’t come along until 2013, when author, automotive researcher and friend of Hemmings Geoff Hacker stumbled across the car in a newsletter from Sondre Kvipt, the man behind the Kustomrama website. 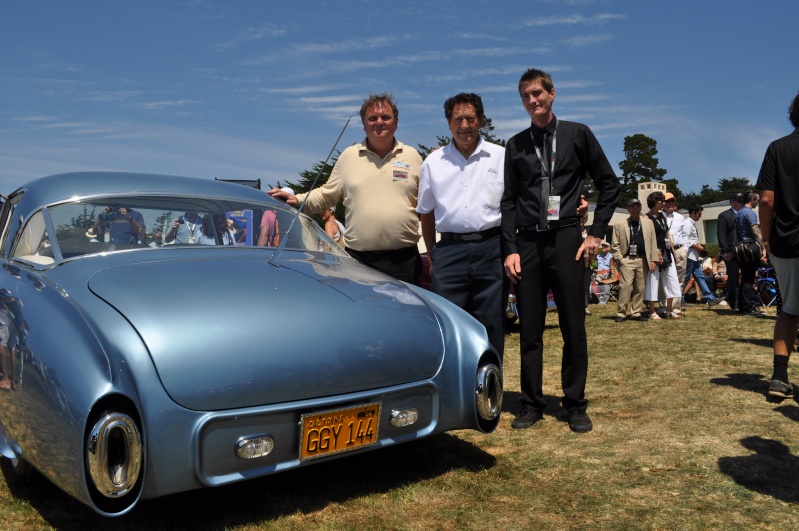 Geoff, with longtime friend and collaborator Rick D’Louhy, agreed to buy the Leo Lyons Merc, knowing virtually nothing of its history, but impressed by its magazine cover-car status and reasonable asking price. A deal was struck with Craig, and Geoff eagerly jumped into researching the car. Step one was tracking down Leo Lyons, then living in his hometown of San Bernardino, California. Leo remembered the car well, and regaled Geoff with the 10-year odyssey of its creation. When asked by Geoff about the donor car, Leo replied with more than a little scorn, “What donor car!” Even 48 years after parting with it, it was clear that Leo was proud of his creation. 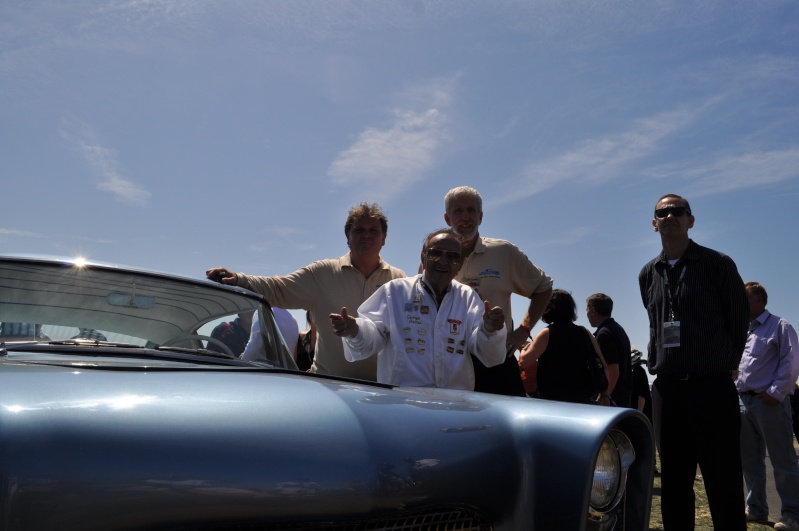 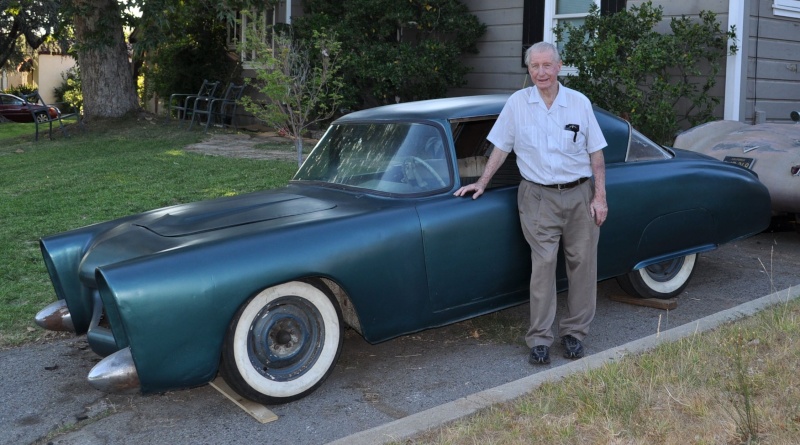 Leo Lyons poses with his creation in 2013.

Sadly, Leo died in November of 2014, nine months before the restoration of the Ultra Modern Merc was completed. It wasn’t his only contribution to the motoring world, either: After creating the Merc, Leo went on to develop hemispheric heads for the small-block Chevy V-8, and embraced the fiberglass dune buggy craze with a body of his own design, dubbed the Fun Hugger. Like the Merc, both have been largely overlooked with the passing of time, but Geoff hopes the Merc’s reemergence will change that. 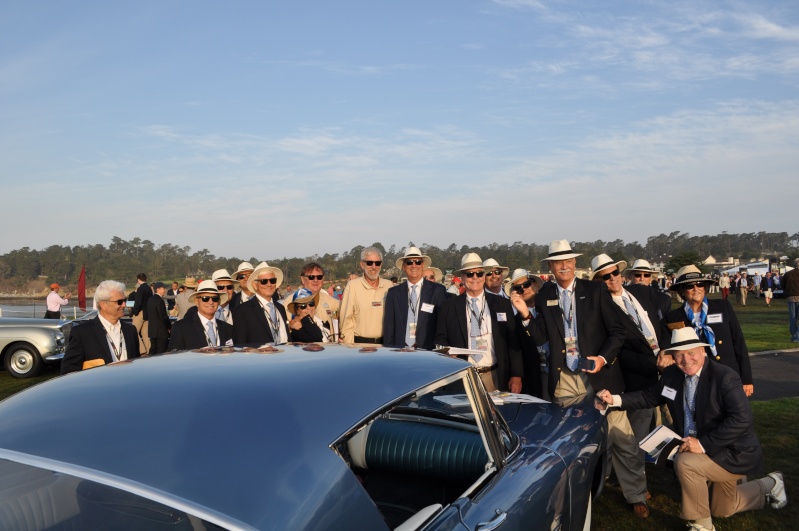 Thanks to a team of artisans employed in the car’s restoration, the Ultra Modern Merc is ready for its close-up on the lawn at Pebble Beach. Whether or not it wins its class is largely irrelevant, as merely getting the car, and its original builder’s name, back in the public eye is reward enough. 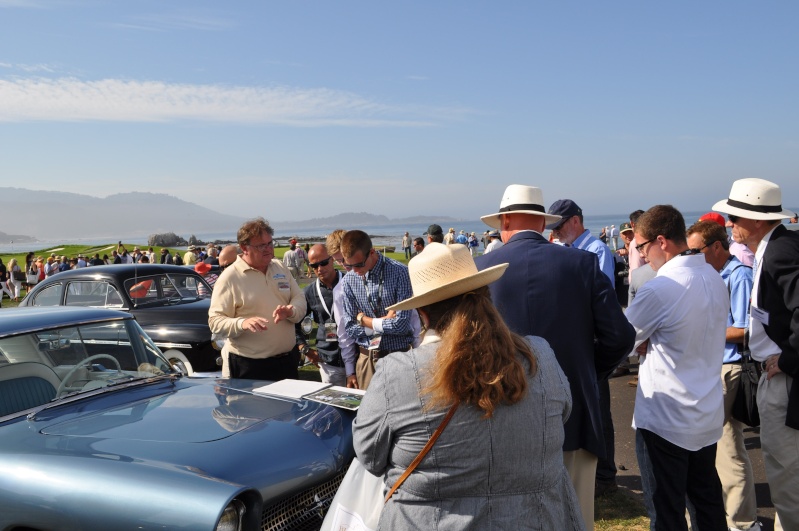