Ed Roth is alive and well. Of course the vessel that represented Big Daddy stopped working on April 4, 2001, but that's beside the point; Ed Roth is far greater than any corporeal existence. 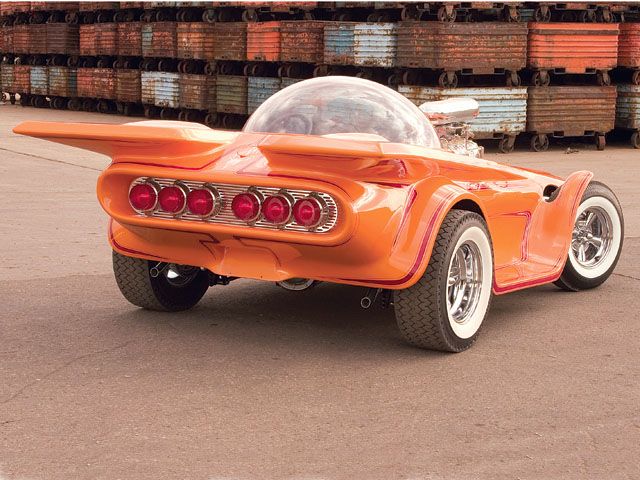 Fritz Schenck is proof of Ed's bigger-than-life personality. While many emulate Big Daddy and his art, Fritz is one of the few who subscribes to Roth's "forge your own way" car-building philosophy. 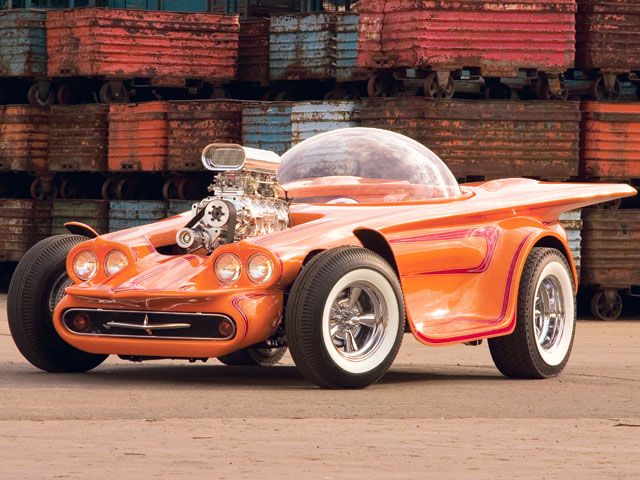 He started the Roswell Rod much the same way Ed Roth started his spacey endeavors: "I started with a whole bunch of stuff that nobody else wanted," he says, then, "I built a car around it." 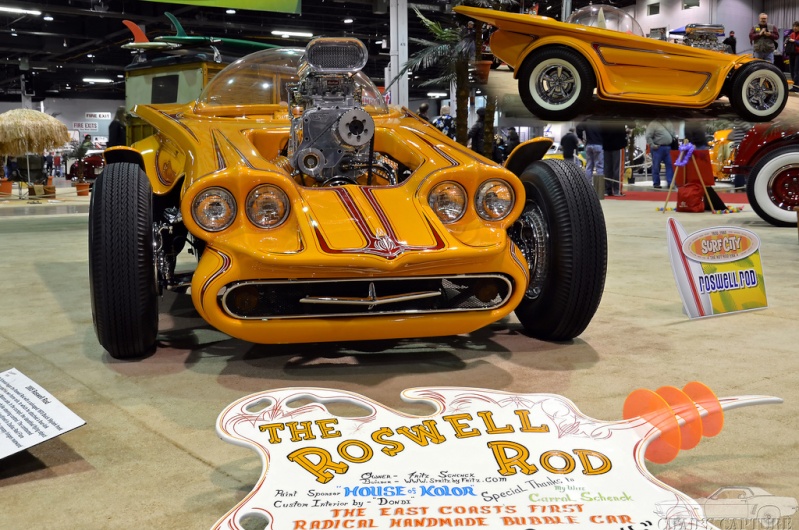 He literally started the Roswell Rod with a cast-off '70 Buick Skylark front frame clip. His reasons: "It had neat-looking finned drums ... and it was cheap," he says. He rebuilt it, fabricated some 2x4 framerails to go with it, and modified a Total Cost Involved four-link to mount a 10-bolt GM axle. 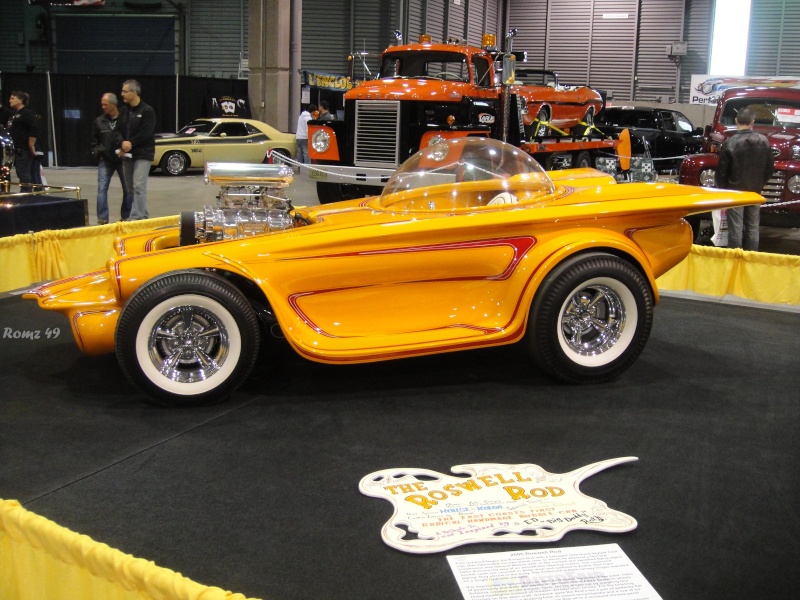 He set up the chassis with a small-block Chevrolet, fabricated his own pedal assembly, and cut down a '68 Olds Toronado radiator to fit the chassis. Following in Ed's recycling footsteps, Fritz whittled the brackets off an old Sears compressor tank for the fuel tank. Then Fritz stacked plaster-coated newspaper wads Roth-style in a general shape around the major components. He filed the cobby shape down, stacked more "spitwads," and filed yet more until the Roswell Rod started to appear. He addressed the interior the same way to achieve a cockpit with a hot-tub appeal. Then he laminated the body in fiberglass and resin, ground off the imperfections, and chipped away the plaster buck. While he toiled away on the body, a top-secret aerospace manufacturer formed the Roswell's bubble canopy. Once everything started coming together, Fritz shot the finished body in keen House of Kolor Roswell Radiation Flow. He fabricated a grille from rain gutter mesh and made the star in front of it from a Model A wishbone. Rick over at Oyster Bay's V-Twins Cycle plated everything. 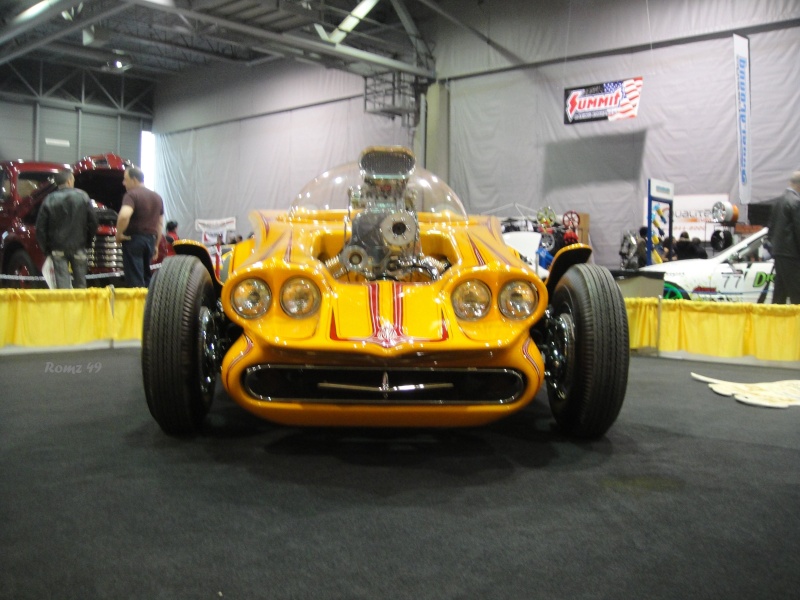 He debuted the Roswell along with Dave Shuten's Mysterion clone at the 2005 Detroit Autorama. The sight of the two outlandish, bubble-canopied cars genuinely flipped everybody's lid. 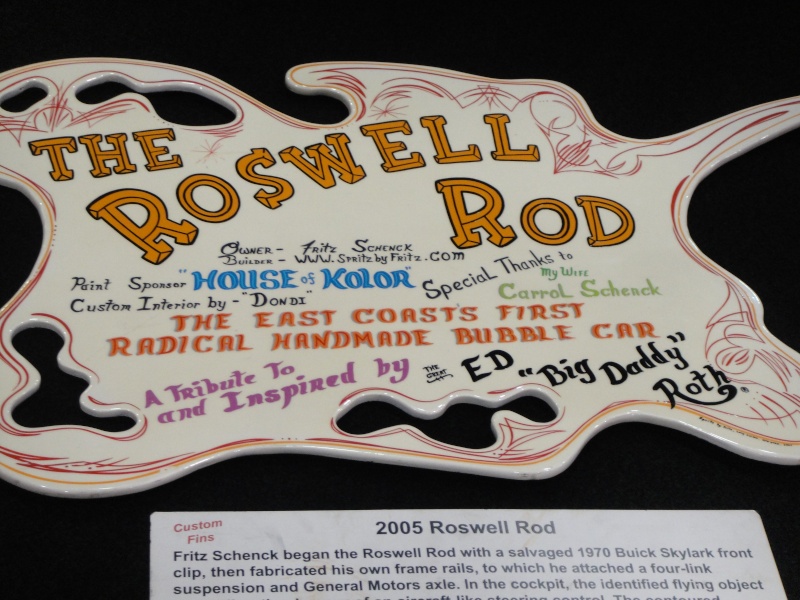 "After I read a few of Roth's books, it made total sense. Why would you want to go to all that effort to change someone else's design? After all, when you're done, people still say 'oh, that's a so-and-so,'" he says. "If you're gonna invest all that effort, why not start with your own design?" 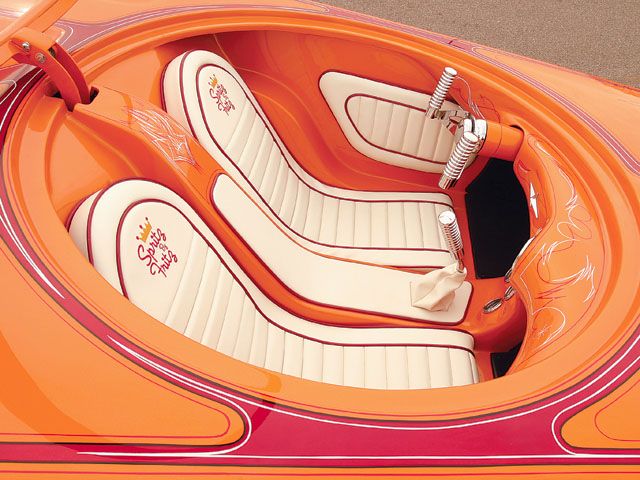 The results, he says, are priceless, "especially the little kids that get all wide-eyed at shows; they make it worth more than all the trophies you could give me." It's for that reason that we thank Fritz's wife, Carrol, for letting him indulge this fantasy. He truly is a kid stuck in a sardonic man's body. 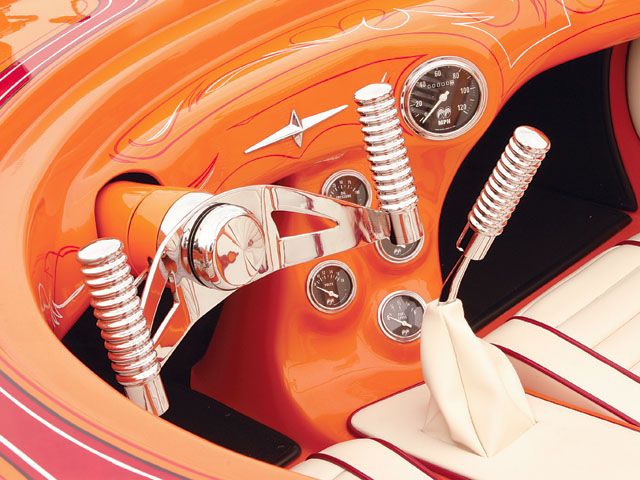 Now we put the burden on you: If the idea of a truly unique car appeals to you, break away from the crowd and do your own thing. It might take more effort, but when was building a car about taking the easy road? 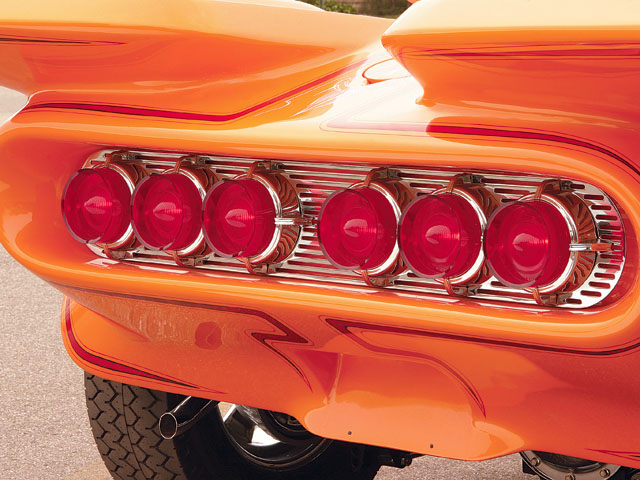 Drivetrain
Bellmore Machine freshened up the 327 and Fritz assembled it with a Weiand 6-71 supercharger topped with a pair of Edelbrock AFB-style carburetors. It wears other '60s tricks like a Roots-style supercharger, Edelbrock script valve covers, and a finned air scoop. Fritz dropped it into the Roswell with a Banner Transmissions-prepped TH350. 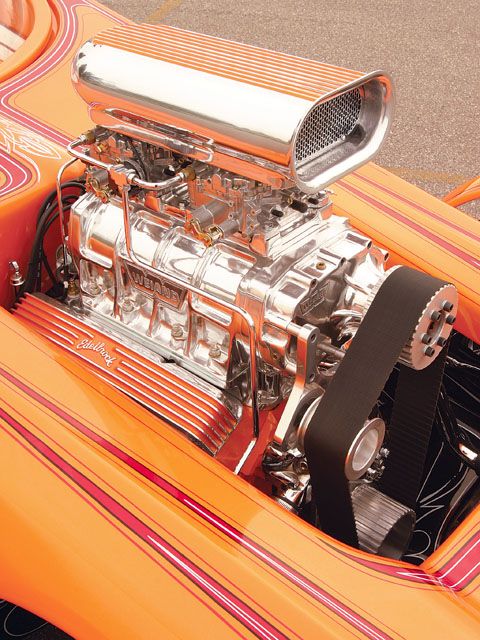 Chassis
The Roswell Rod was started with just a cast-off '70 Buick Skylark front frame clip that Fritz rebuilt and then fabricated some 2x4 frame- rails to fill out the middle and run to the back. A modified Total Cost Involved four-link mounts a 10-bolt GM axle. 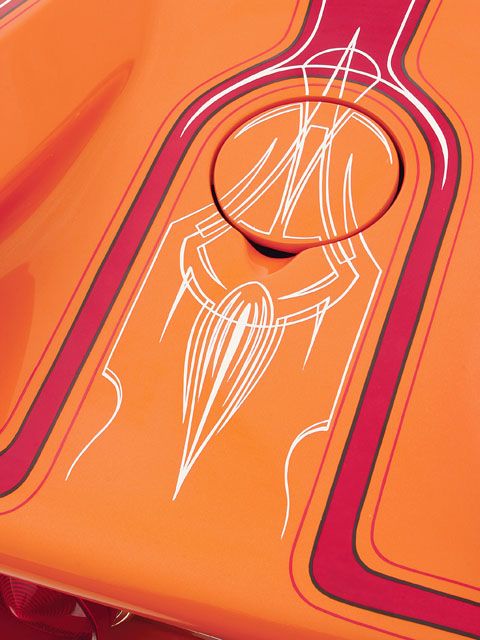 Wheels & Tires
Due to a rich aftermarket and restoration market, we still have many period pieces available within catalog reach. The Roswell rolls on 14x6 and 15x8 Astro Supremes, Firestone rags up front, and recapped cheater slicks out back. 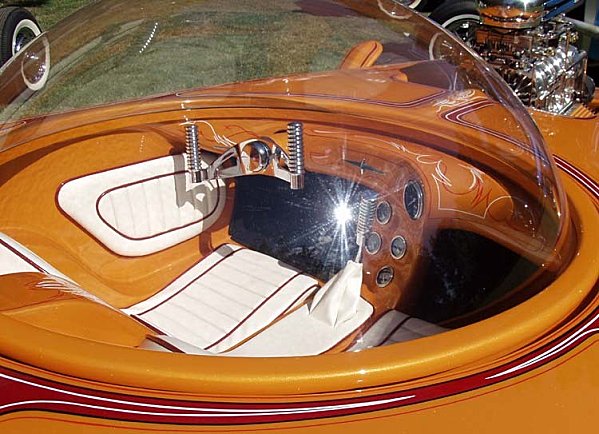 Body & Paint
Fritz designed and built the Roswell's body Roth-style by stacking plaster-coated newspaper wads in a general shape until it started resembling his vision. The body was then laminated in fiberglass and resin, the imperfections ground off, and the plaster buck chipped away. Fritz then prepped the body and shot the House of Kolor Roswell Radiation Flow himself.

Interior
Fritz made the seat buckets and had Custom Interiors by Dondi (Huntington, NY) clad them in white vinyl with Zodiac Red Flare piping. Other than the Moon gauges and the origin-unknown star in the dash, there's nothing off-the-shelf in the Roswell. Fritz shortened a vintage Hurst Indy shifter specifically for the application. The steering wheel is an entirely original Fritz Schenck creation. 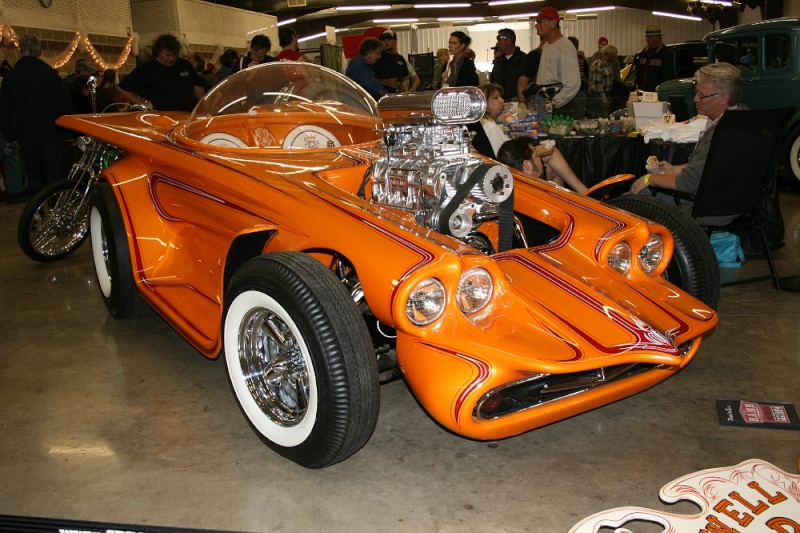 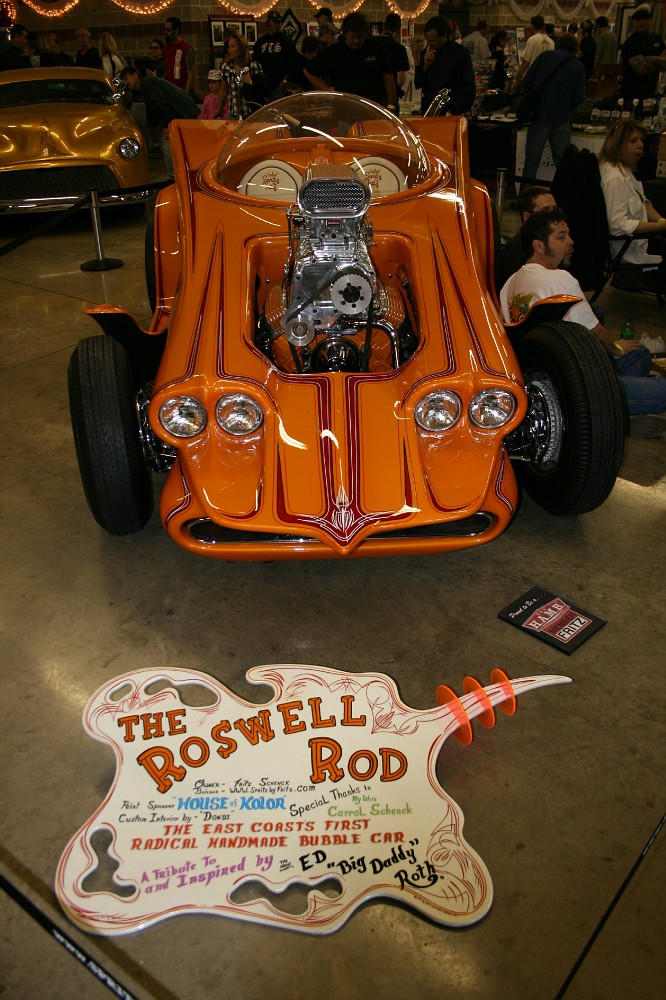 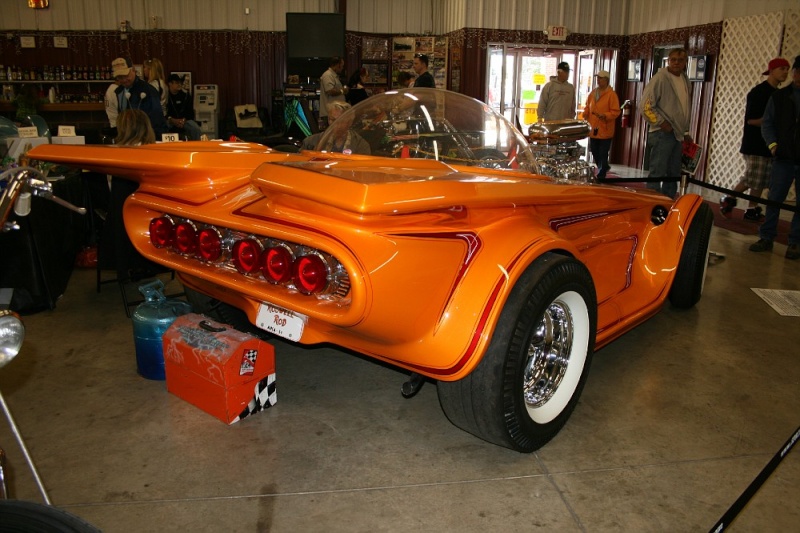 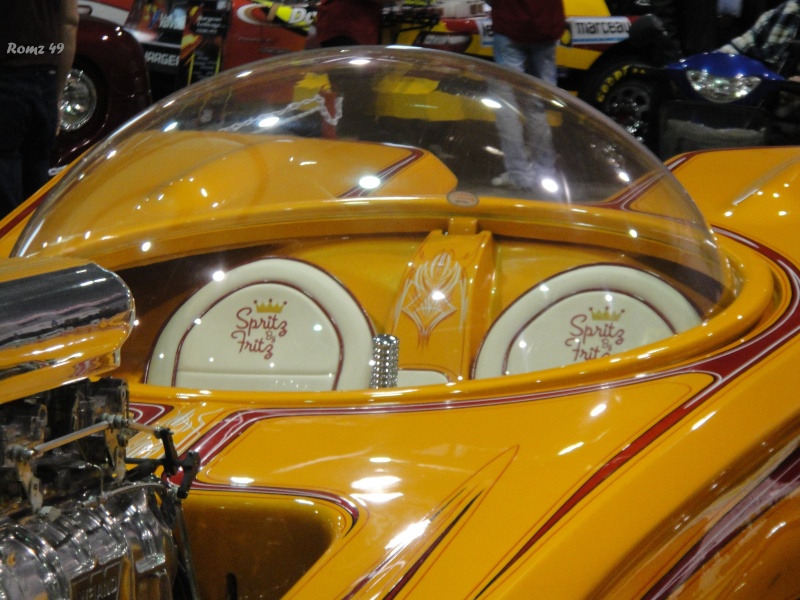