1953 Buick Roadmaster owned and restyled by John Bozio of East Hartford, Connecticut. The Roadmaster was John's third custom, and he traded it for a customized 1949 Buick Super Convertible in 1955. The '49 Buick had a straight eight engine, and as John wanted more power under the hood, he decided to make a trade. He started to customize the Roadmaster in 1956, at age 19. John worked out of Cooney's Garage, and he learned the skills of auto repair and body work by hanging out at Don Cooney's shop from the age of 12. At age 14 he entered trade school, to become a machinist.[1] 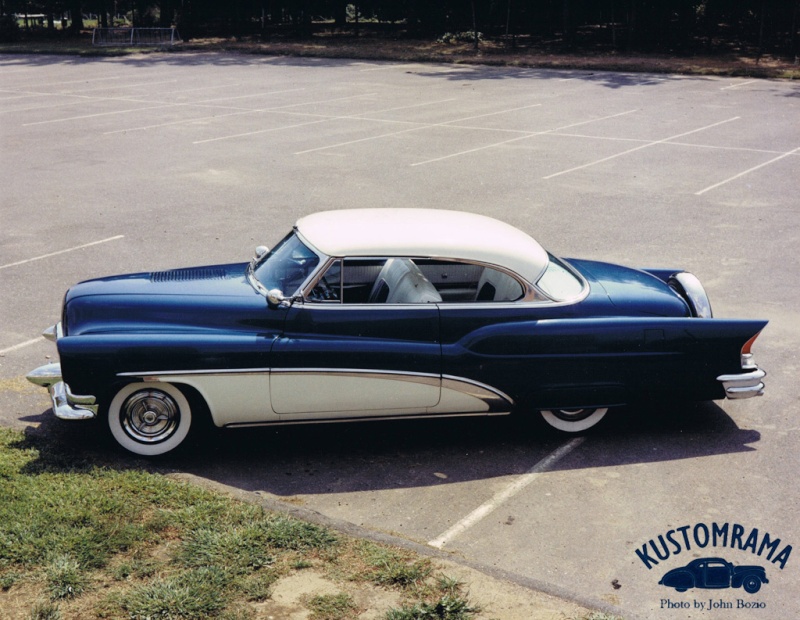 John frenched the headlights on the Buick by pulling the front fender line forward. Dagmars from a 1955 Cadillac were installed along with a centerpiece bar from a 1953 Buick bumper. The grille was composed of heavy expanded aluminum with a center floating bar from a 1955 Buick. The letters "BOZIO" replaced the original "BUICK" lettering on the top grille bar. The rear fenders were extended 22 inches, and modified with tail lights from a 1956 Packard Clipper, and custom inside-fitting flared fender skirts. The extensions were hand-formed from flat sheet metal. Rear bumper came from a 1956 Buick, and was altered to occommodate tail lights and John's homemade Continental Kit. The fender bottoms were dechromed, and the portholes were removed from the front fenders. The hood was dechromed as well, and featured 22 ten inch long louvers in the dead center. The louvers were cut out of a Ford Model A side hood panel that John got out of a junkyard. The door handles were also removed in favor for electric solenoids with micro switches located in the moldings. Inside, the car sported a 1955 Buick dashboard. It was upholstered in white leather and pleated blue nylon. The rugs were made of silver-gray "Borgana" synthetic fur. A portable 8 1/2 inch television was mounted below the dash. The interior did also feature a Emerson 45rpm phonograph and radio. Once completed, the car was painted in a two tone color scheme. The roof and the sweep sphere panels were painted with 12 coats of 1956 Chrysler Artic White, while the rest of the body was laquered in 12 coats of 1956 Chrysler Mediterranian Blue. The engine compartment was painted with white marble paint, and the Buick was powered by a red Buick V8 engine that had been bored to 322 c.i. The engine had a 9.5 to 1 compression ratio, and it featured dual quads, a chromed intake manifold, dual exhaust, and Mallory ignition. The build took 1 1/2 years, and it was completed in 1957.[1]


In February of 1958 John's Buick was shown at the 8th annual Hartford Autorama. By then i had already won one "First in Class Award". Later on the same year, Customs Illustrated ran a featured story on the Bozio Buick in their premiere issue.[1] 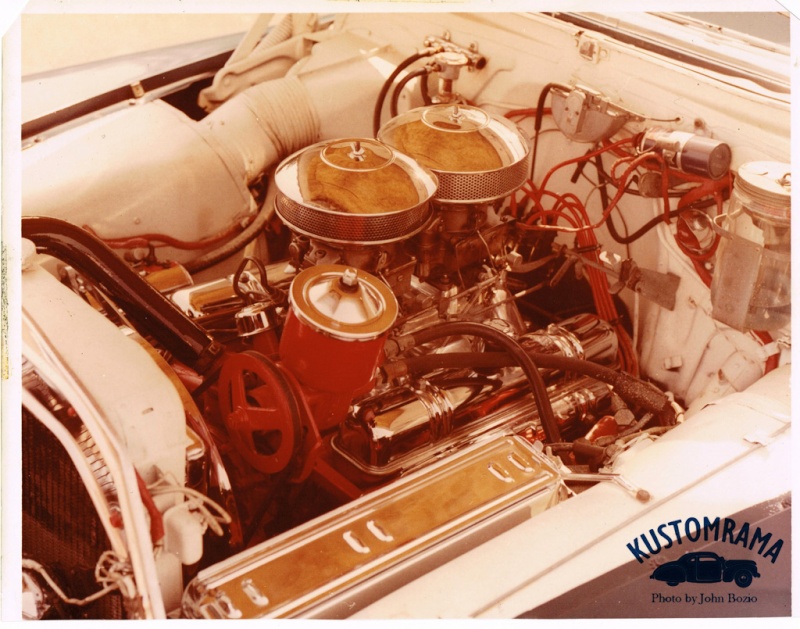 Around 1959/1960 John started a rebuild of the Buick. He chopped the top 3 inches, and changed the headlights from single to quads. The front floating grille bar was replaced with a new bar he made from a 1957 Chevrolet grille bar that he cut the center out of and shortened. The interior was redesigned, and John installed swivel seats from a 1960 Plymouth Sport Fury. He separated the seats so they appeared to be bucket seats, so the interior featured 4 bucket seats. A full length center consol, that ran from front to rear, was built from two 1960 Ford Thunderbird center consoles that he joined back to back. The front consol was fitted for a 8 1/2 inch TV that he had in it before. An oval steering wheel from a 1960 Plymouth was installed as well. John did also buy a set of 1953 Cadillac Eldorado Wire Wheels for the car. As John was working on the second version of the car, he lost interest in the Buick and stopped working on it. As the muscle cars came in real strong in the 1960s, it was no longer cool to own or drive a custom. John remember at that time if you drove your custom to one of the local hangouts, your peer buddies would point fingers and laugh at you. You were no longer part of the in crowd if you drove a custom. Custom cars were out and muscle cars were in. Selling a custom car was almost impossible as the young guys wanted muscle cars, while the adults wouldn't buy customs because they didn't know what they would be buying, and if they damaged it, it would cost a lot to repair. According to John, many custom cars ended up in the local junk yard, while a few were set on fire by their owners to collect the insurance money. During the fire, the lead that melted of the cars was picked up and sold by the pound.[1] 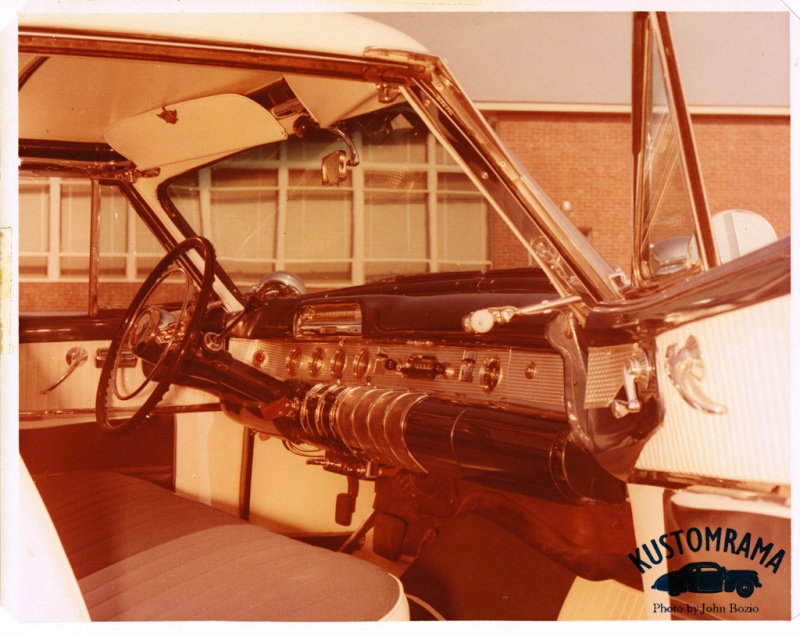 John sold the Buick to Bob Harris in 1968. Bob was a friend of John, and he came along at just the right time as John was about ready to set the car on fire himself. At the time the Buick was running, but it was a basket case, and it had not been on the road since John started the rebuild. It had been painted flat black, and it featured 1957 Cadillac hubcaps up front. Bob had some issues with his wife about the car, and he sold it to a friend a half year later. The new owner worked at a local body shop, and he thought it would have been cool to get the old custom back on the road again. According to rumors, the new owner got involved with drugs, and he was sent to prison.[1] The Buick was then parked in a farm field at his mother's house. The car sat outside in the weather for about 6 years before Paul Dorey of Cromwell, Connecticut spotted it. Paul thought it would be a nice project car to put together again, so he bought it and brought it back home to Cromwell. After it had been sitting in the yard for 6 years, it had sunk down in the mud to its quarter panels. Three had also grown up around the car that they had to cut down. In the late 1970s Paul moved from Connecticut to Arizona. As he already had a 1933 Ford he brought along, he decided to sell the Buick.[2] Paul sold the Buick to Bob "Red" McCormick. Red was an old friend of John Bozio, and they lived in the same town. Red was a real car guy, and he even worked for George Barris in California for a while. Red was having a high school reunion with a 1950s theme, and he thought it would be cool to show up in a real 1950s custom. John's old Buick came in mind, as Red had watched the car being built at Cooney's Garage. He set out to locate the car, and it didn't take long time before he had found it. A deal was made, and Red towed the old custom back to his garage. The car was still a basket case, but amazingly, all of the parts and pieces had stayed with the car since John Bozio sold it in 1968. Red got right to work on the car, and installed all of the pieces that John had disassembled, before he got it running and showed up at the reunion. Red told his friend Ed Moore that the Buick had a broken rear window when he got it. Because it was chopped, he got a piece of Plexiglas that he put in an oven at a local Pizza shop to heat it up and bend it. Red and the Buick became a real hit at the reunion. After the reunion, in September of 1978, Red gave John a call. He told John that he had his car, and asked if he would like to go for a ride in it again. Red would drive the car around town. He also went to a couple of local street rod shows with it, but they refused to let him in with the Buick, and told him to get that big hunk of iron out. In 1979 Red advertised the car for sale at the Hersey Swap Meet. Red sold it so he could buy Burt Hamrol's 1950 Ford, another old 1950s custom.[1] It was advertised as a Custom Car of the Fabulous 50s Custom Lead Sled, and the asking price was $3000.00. Bengt Sjöberg of Tibro, Sweden was at the show. When he stumbled across the Buick, he had already found a mint 1959 Ford that he wanted to buy. The Buick made Bengt change his mind, and he ended up buying the car. Red delivered the car to the shipping yard. The Buick was put on a cargo ship and sent to Sweden.[3]


The old Bozio Buick stuck with Paul Dorey, and a couple of years after he moved to Arizona, he purchased a stock 1953 Buick that he set about to customize with inspiration from the Bozio Buick. The Buick took 25 years to build.[2]


When the real Bozio Buick arrived in Sweden, Bengt tore it down and performed a restoration of the old custom. During the restoration, Bengt replaced the shaved and louvered hood with a stock hood. The car was flat black when Bengt got it, so he decided to paint it black after the restoration too. Bengt went for a gloss black paint job though. With the body complete, Bengt rebuilt the stock 322 cid V8 and Dynaflow transmission. During the restoration, the interior was retrimmed in the same style as when Bengt bought it. The restored version of the Bozio Buick hit the Swedish scene in the early 1980s. It inspired aspiring Swedish custom car enthusiasts everywhere it went, and it is safe to say that John Bozio and his Buick is the reason why so many Swedish custom cars of the 1980s and 1990s were fit with Cadillac Dagmars.[4]


Bengt drove the car all over Sweden until 1990. In 1990 he parked it, and it stayed in storage for the next 23 years. In 1993 a photo of the restored version of the Bozio Buick was published in the "Roddin' Around" section of Rod & Custom February 1993, as Erik Stigsson had sent some photos of Swedish built hot rods and customs to the editors of the magazine, asking if they wanted to buy some stories from him. According to the captions under Bengt's Buick, the Bozio Buick was built in the US between 1958 and 1960, but it was never completed until it arrived in Sweden.[5] Red McCormick saw the photo of the Bozio Buick in Rod & Custom February 1993, and he immediately wrote a letter to the editors of Rod & Custom Magazine to tell them that the Bozio Buick was actually finished when it was first built, and that it landed a featured story in Custom Illustrated July 1958, the first ever issue of Custom Illustrated. The letter was published in the "Rappin'" section of Rod & Custom April 1993. Red enclosed a couple of photos of the car showing it as it sat when he bough it, and sold it, that was printed in the magazine as well.[6] Thomas Shea of Phoenix, Arizona wrote a similar letter that was published in Rod & Custom June 1993.


In 1993, the restored version of the Buick was also featured in Wheels Magazine Mars 1993. According to that story, John started the build in 1958, and after spending the next two years restyling it, he got sick, and the car was parked. It was then forgotten, and stayed tucked away until it eventually swapped hands in 1979. The new owner was not interested in completing the build as well, so he took it to Hersey to sell it.


In 2013 Bengt drove the Buick to the 10th and last Jokers Car Show. Except for a short drive around Bengt's backyard, that was the first time the car had been driven since 1990. 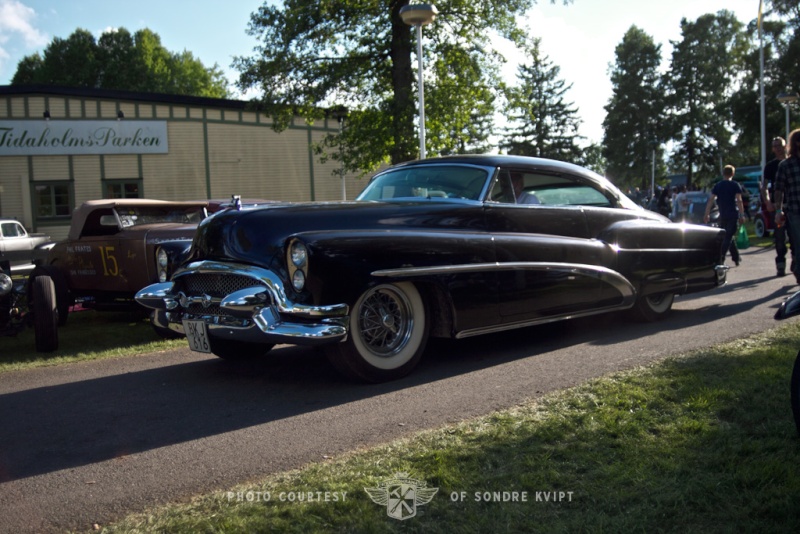 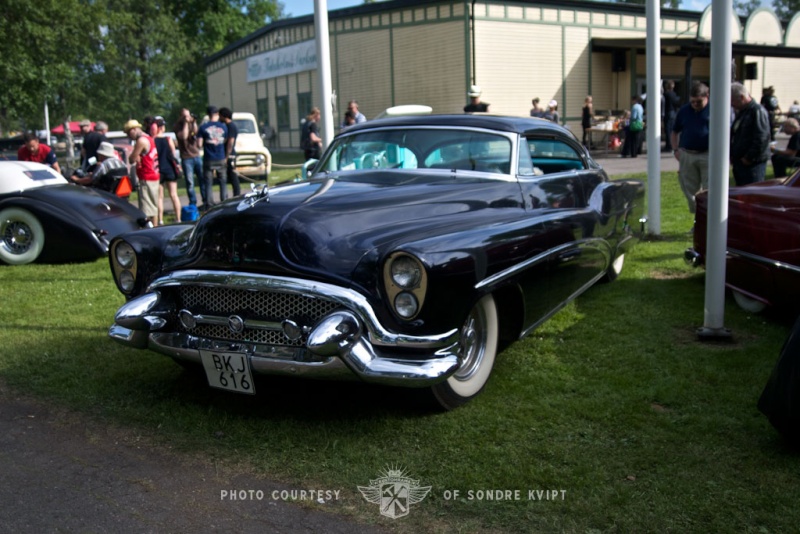 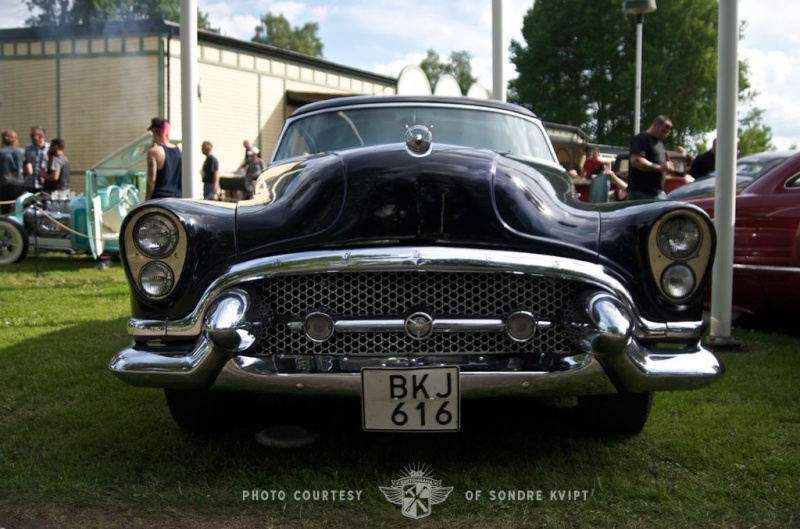 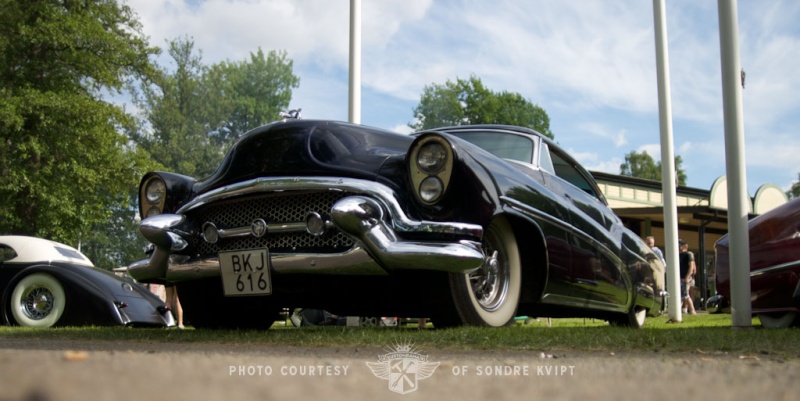 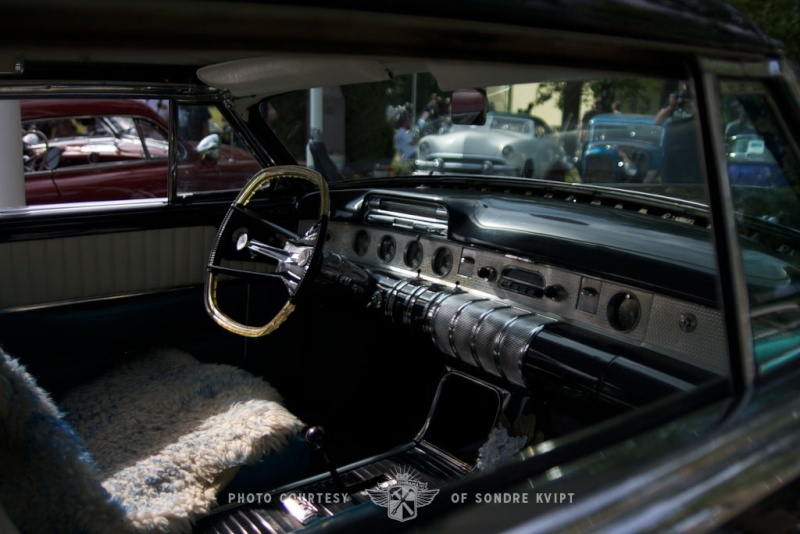 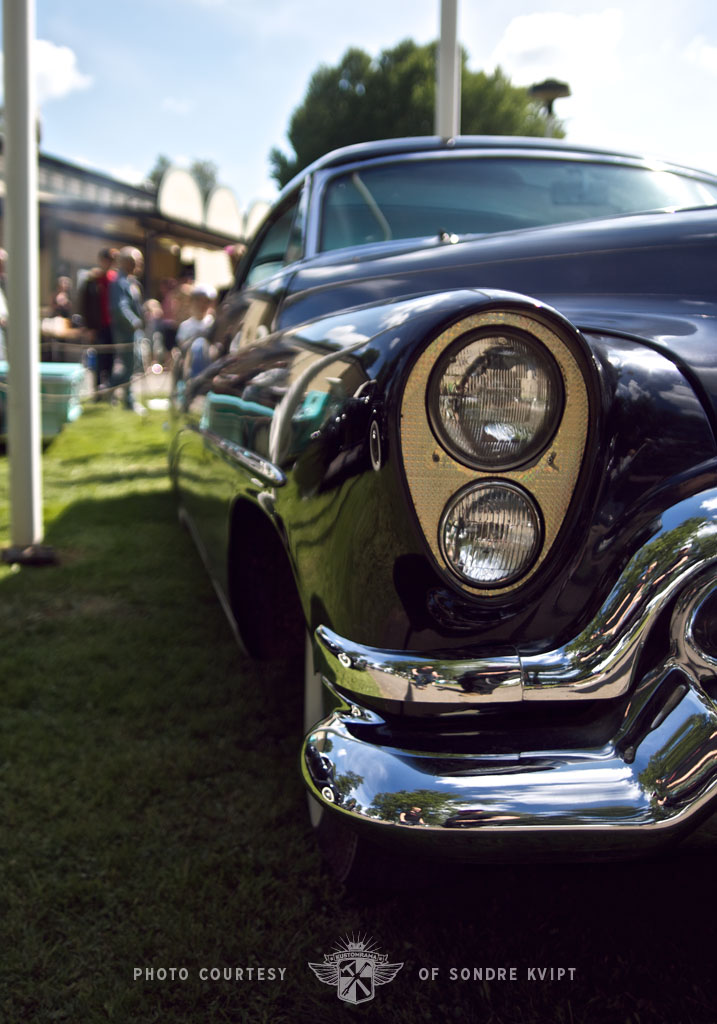 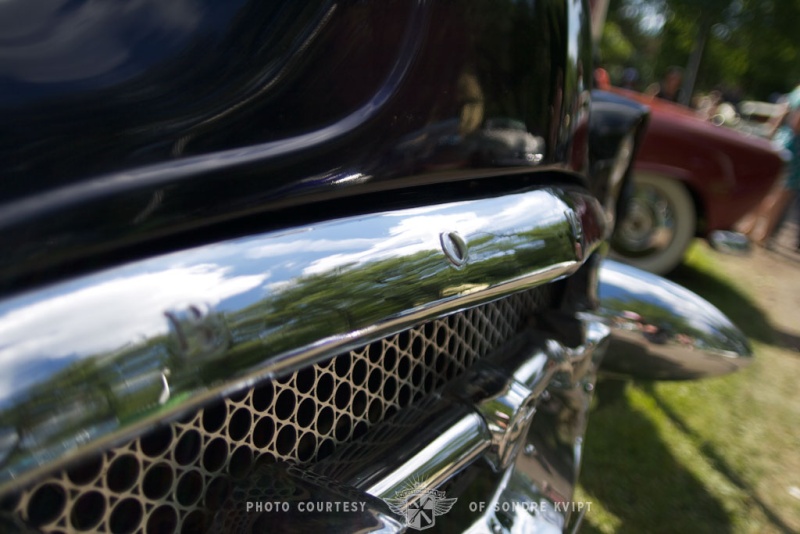 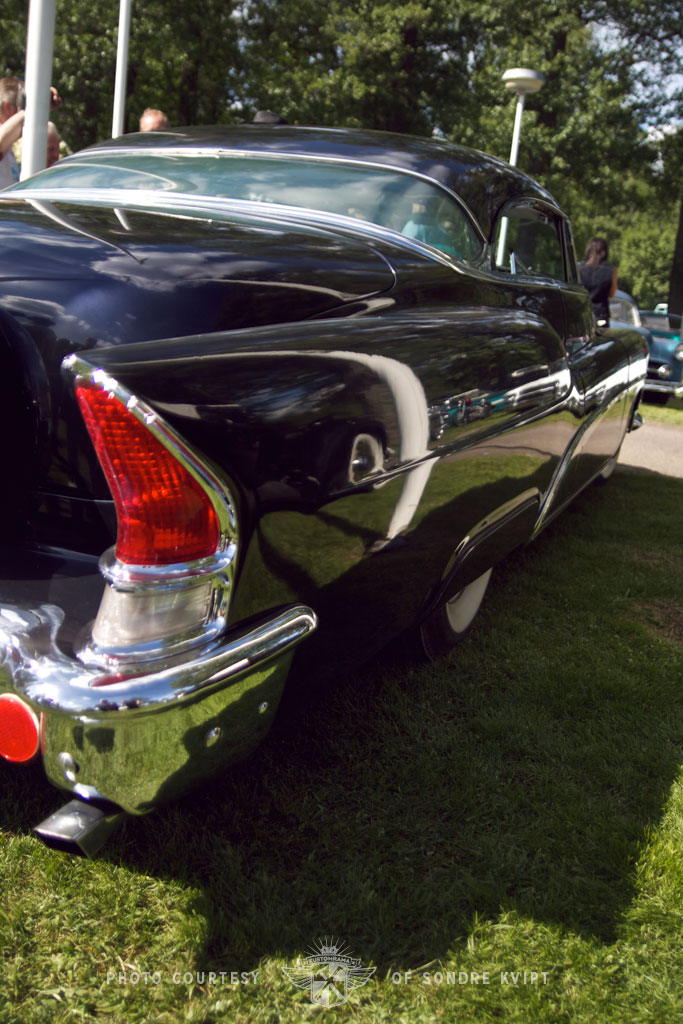 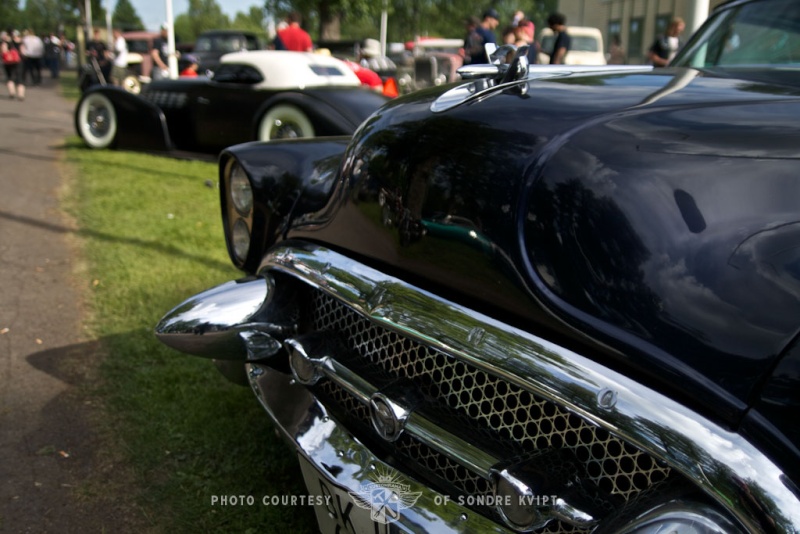 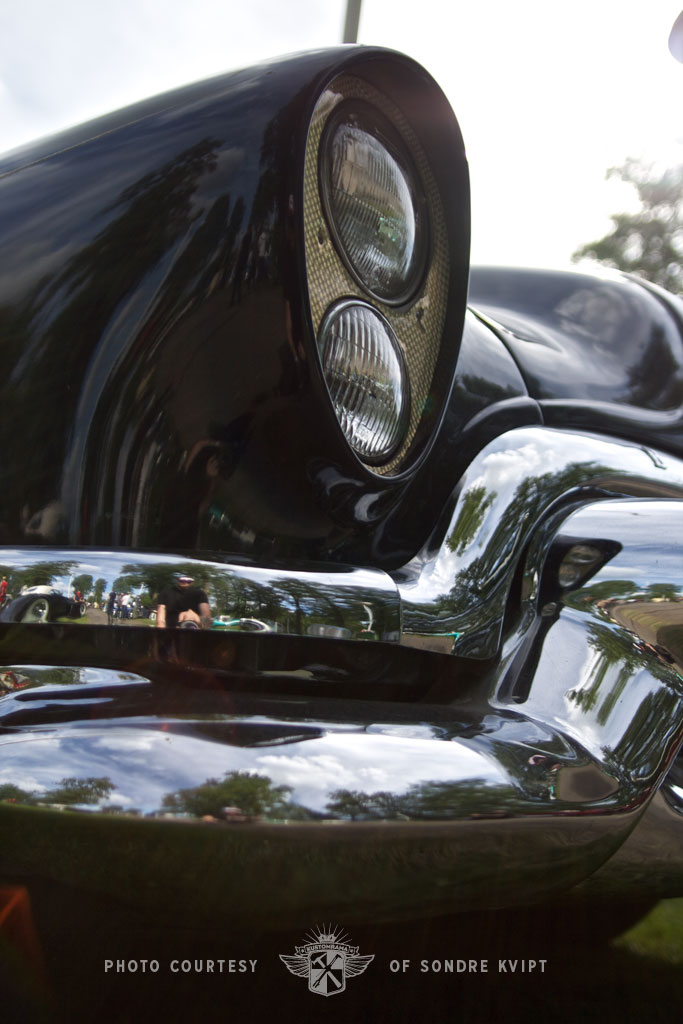 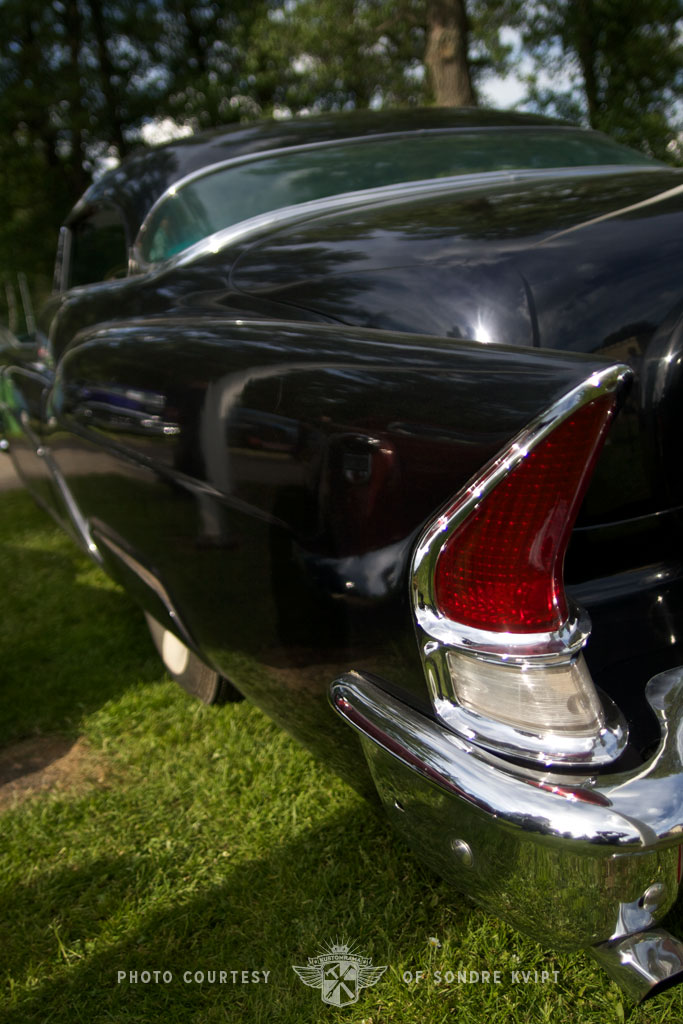 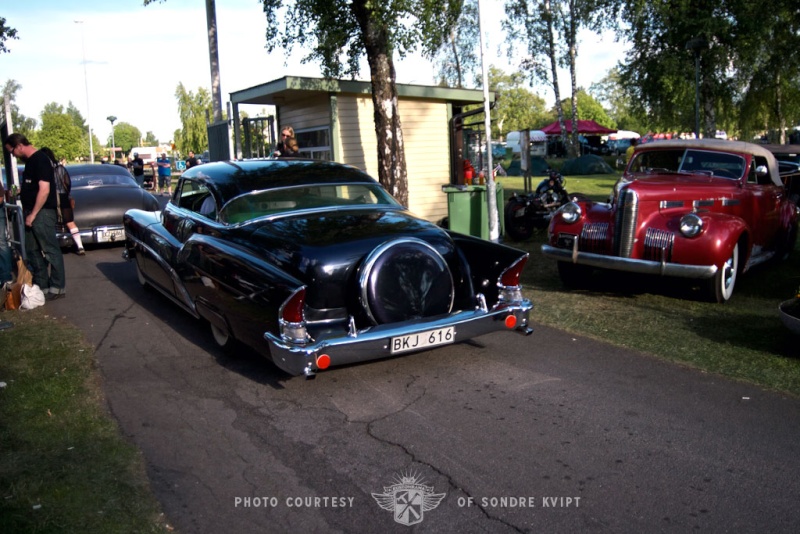 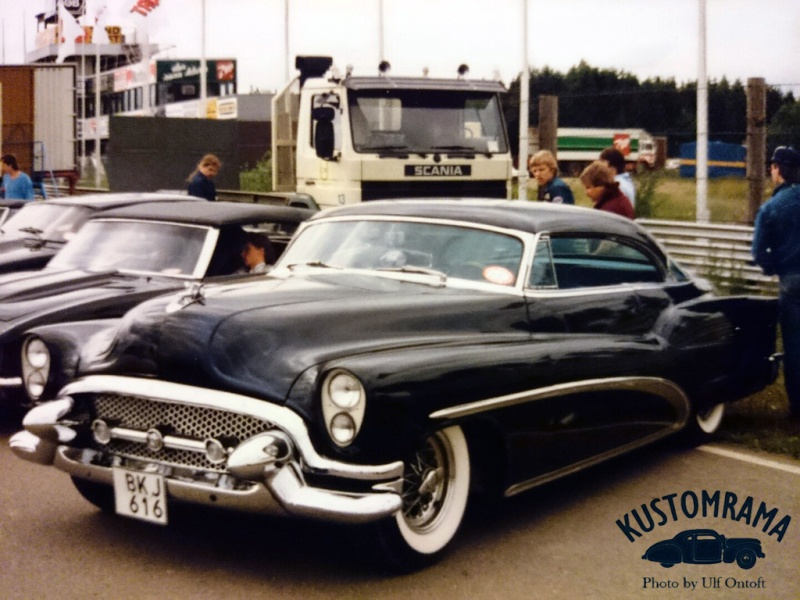 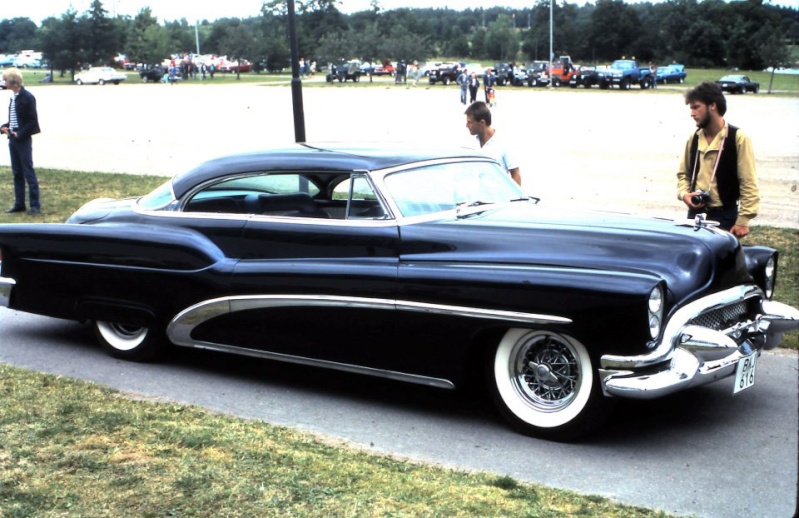 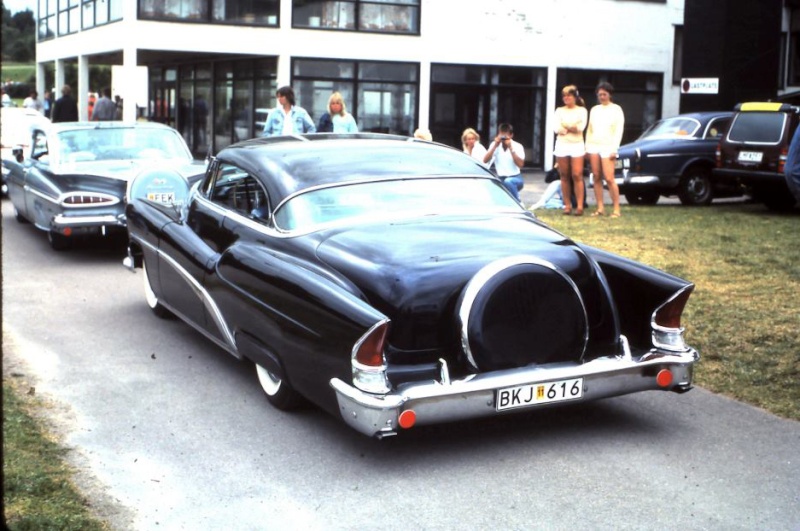 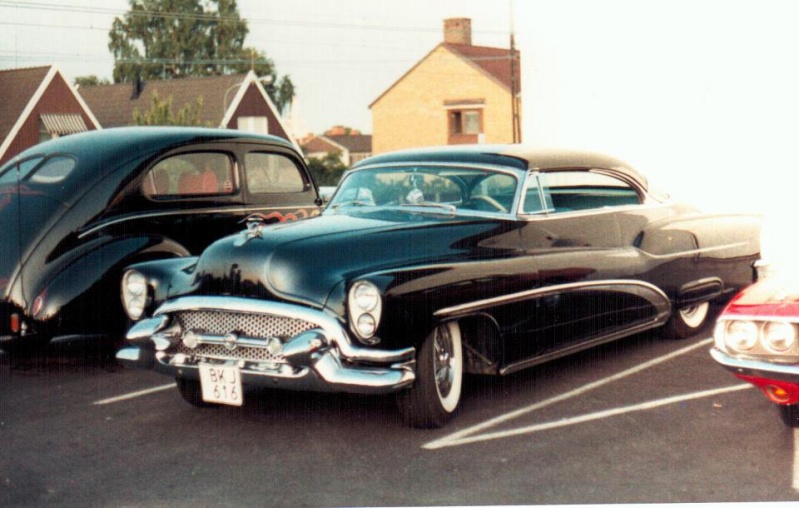 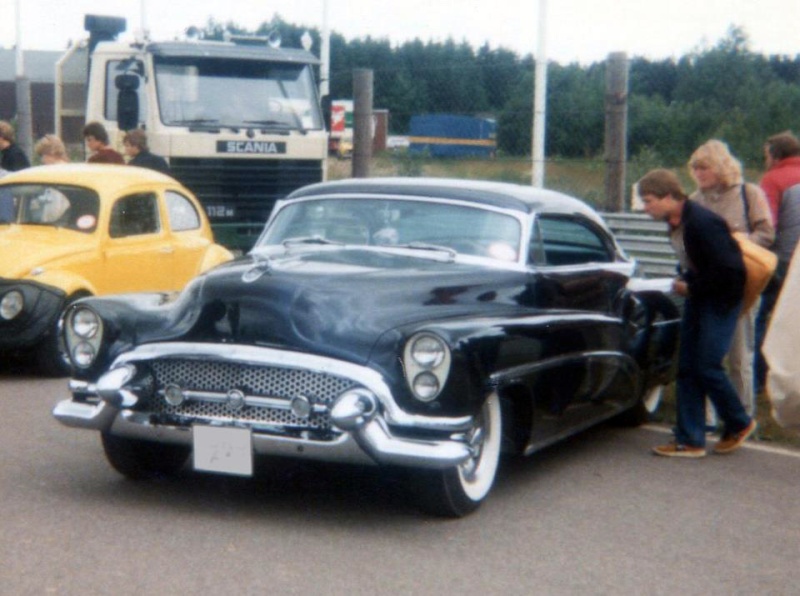 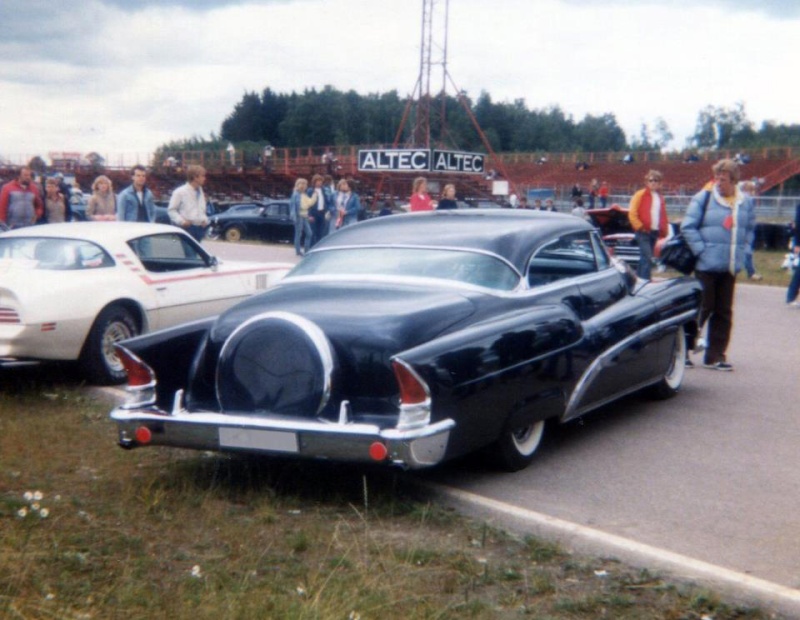 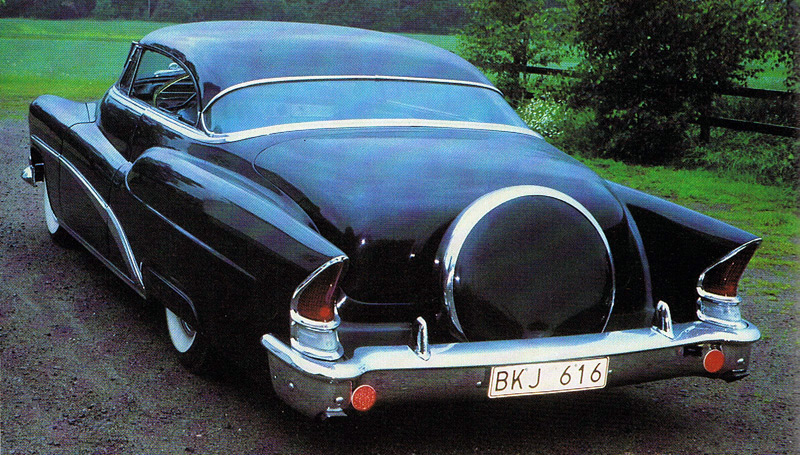 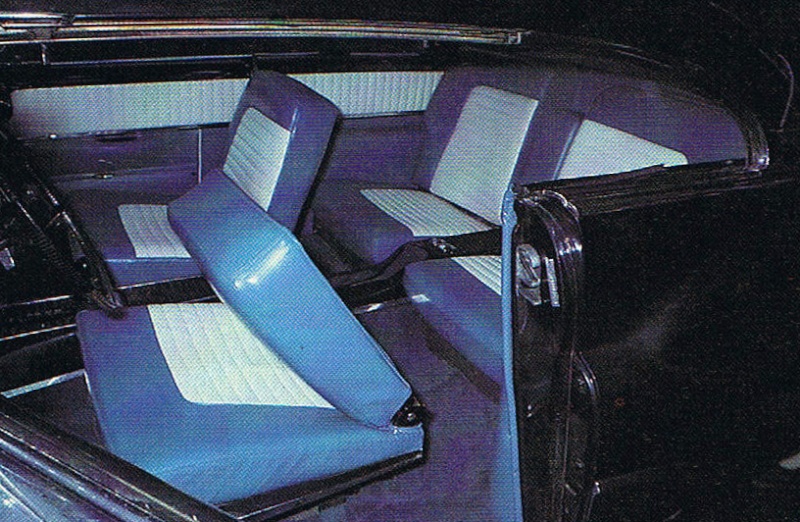 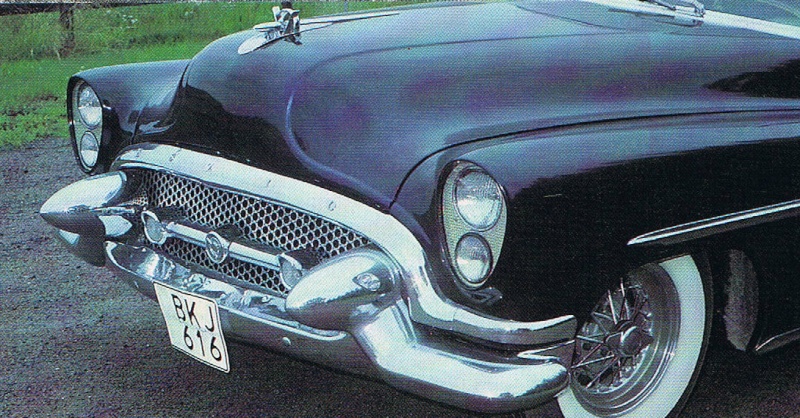 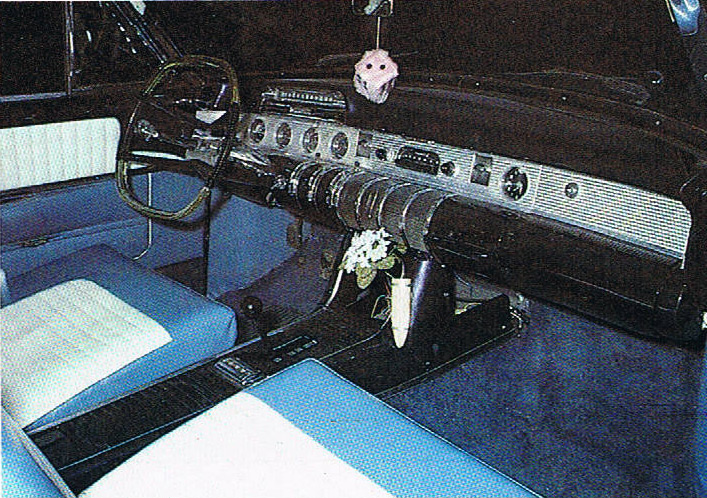 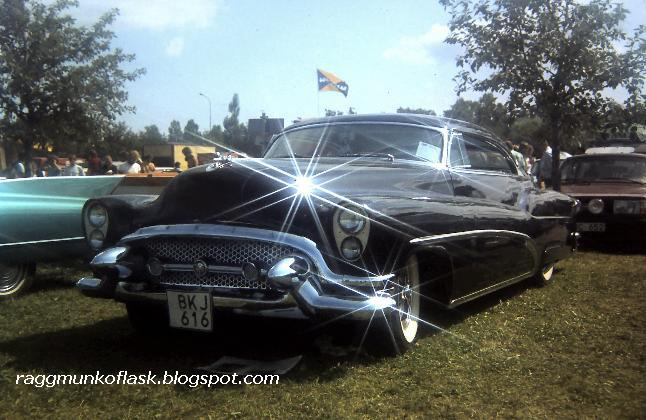 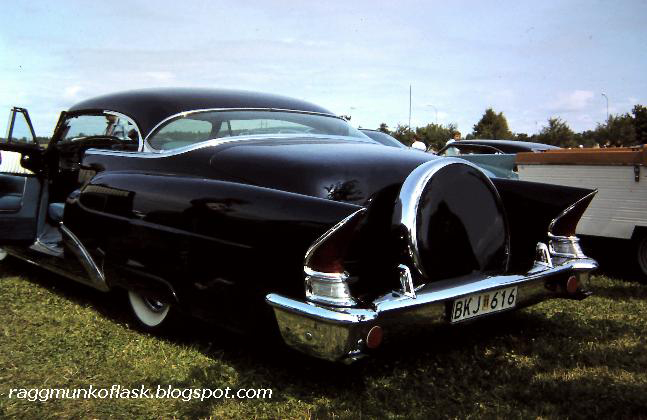 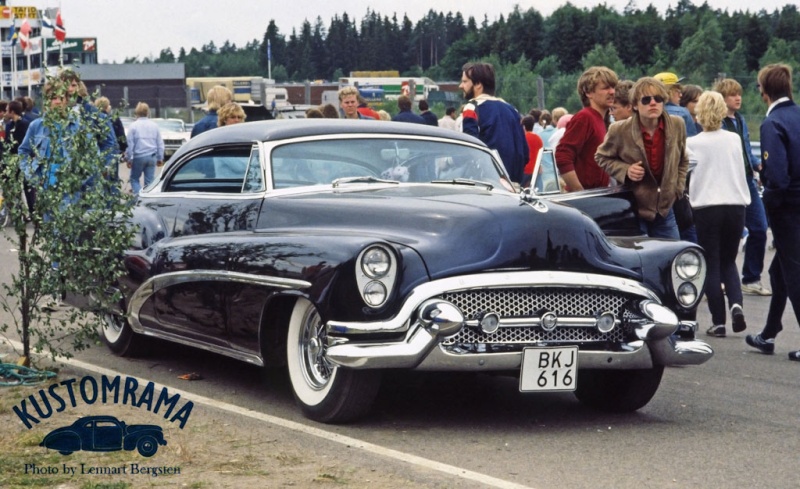